Requisite product shots.
The Sony A700 was used for this review.  For a better understanding of terms and methods used in this review, go here.
This inexpensive APS-C only (DT) lens (made in China) features a fast aperture of F/1.8 with a good fit and finish, although when manually focusing it sounds and feels a little cheap because of all the plastic.  Plastic is also used in the mount–oh well, you can’t have everything in an “easy choice” lens, which is what Sony calls it, I suppose because of the price.  Although the DT 35mm F/1.8 makes a great walk-around lens, Sony is mistakenly marketing it as a “wide angle.”  On a full-frame camera 35mm is wide angle, but the APS-C crop factor makes this lens equivalent to 52.5mm, that’s not wide angle.
This lens will work on your Sony full frame digital camera, which will automatically use APS-C size capt.  It shows the whole image on the A900 full-frame camera at close focus, but at longer focusing distances, there is clipping of the corners with heavy light fall-off, so you probably wouldn’t gain anything by using it on a full frame digital camera if you override the size caption, or on a film camera.
According to the Sony suppied MTF chart above, there are no apheric elements, or other exotic glass in the construction of this lens, that’s a surprise based on the performance.
Focusing.  The focusing ring is at the front of the lens, and does turn during auto-focusing, so watch your fingers.  The filter ring does not turn, so your grads and polarizers will work fine.  Manual focusing takes just over 1/4 turn from Close-in to infinity, and adds 3/8″ or 10mm in length to the lens at close focus.  There’s a tiny bit of slop on the focus ring if you wiggle it by hand when engaged, or disengaged, this doesn’t affect AF operation though.  Auto-focusing is quite loud when running from one end to the other, and not whisper quiet like the real Supersonic wave motors (SSM) on some of Sony’s other lenses.  Unfortunately, that’s the nature of Sony’s SAM or “Smooth Auto-focus Motor.”  I did find the focusing to be quite accurate at longer distances, even at F/1.8, although up close using F/1.8 requires finesse to get the sharpest shots because of a very slim depth of field.  Note on manually focusing; be sure to use the barrel mounted AF/MF switch to de-couple the focus ring, you cannot use DMF or the thumb switch (on select Sony cameras); that just makes the AF inoperable, but does not de-couple the focus ring; turning the focus ring while still engaged may damage internal components.
In the box is the lens, hood, and owner’s manual with a warranty card, no case or pouch.

Lens flare/ghosting.  Above average control of ghosting among prime lenses.  I see a green blob if the sun is at the edge, or inside the image, but it isn’t bad at all.  Flare is a little heavy, so watch out if the sun is anywhere near the front element.  Use your hand or the supplied hood to try and mitigate the problem.  See samples below.
Color fringing (CA).  Above average control, look for very mild amounts of lateral color fringing near the edges, only visible at huge viewing sizes or 100% crops.  I see the typical fast lens, wide open axial color fringing at F/1.8, but diminishes to almost nothing by F/2.8.
Bokeh.  Somewhat smooth at all apertures, but a light ring is visible around the highlights.  The aperture shape starts to show up between F/2.8 and F/4.  Look below for sample crops.
Color.   Same as other Sony lenses.
Close up filter.  +4 tested and works, but not needed!
Coma.  Shows a small and nearly insignificant amount at F/1.8, see below.
Regular filters cause no additional light fall-off problems.
Filter size is 55mm.  Other Sony lenses that use 55mm filters are; 100mm macro, 50mm macro, 50mm F/1.4, 35mm F/1.4 G, 18-70mm, 18-55mm, 55-200mm, and the 75-300mm.
Distortion.  You’ll notice moderate barrel distortion when straight lines are near the edges.  Fortunately, the curve is simple, and easy to correct in post processing.  Check out the cropped sample below.
Distortion example directly below.
Bokeh crops next.

Bokeh, or background highlight blur is generally good, although I see a slight ring around the highlights at all apertures.  I see some spherochromatism, meaning green tinged out of focus highlights in the background, and magenta tinged in the foreground.  This isn’t something to worry about.  Crops above were taken from the center of the image, focused at about 5′ (1.5m) with the background about 40′ (12.2m) away. 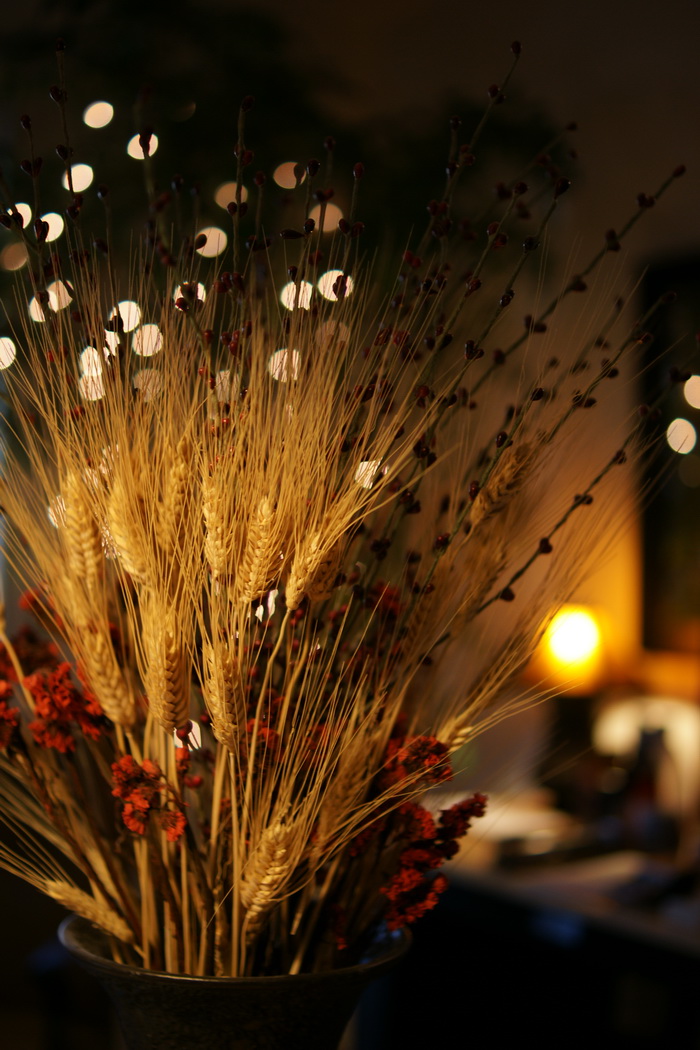 This is a relatively close focus shot (full image) at F/1.8 with tiny tree lights as highlights in the background.  The bokeh looks lentil shaped along the sides, and transitions to round in the middle, that’s normal when a large aperture is used,go here for a better study.

I see a small green blob (top left shot near center) when the sun is close, or inside the image at certain angles and exposure values, and obviously more visible depending on background, but overall, very good control of ghosting.  With the sun centered, there is no wagon wheel or disc visible, even at F/11, that’s also good news.  Flare control is only average at best, so watch out when the sun is anywhere near the image.  Make sure you use the included hood, or your hand to block the sun if possible, examples of this on last row.
Light fall-off.

When the aperture is wide open, there is somewhat heavy light fall-off, but it transitions evenly towards the center, and isn’t necessarily noticeable in a low-light image.  At F/2.2, the image edges lighten up substantially.  At close focus (at all apertures, not just F/1.8 as pictured), light fall-off is more apparent, but that’s not anything to get worked up over.  Note; watch your center highlights when using F/1.8-2.0, as the camera’s automatic exposure system may over-expose the centers as it tries to properly expose the rest of the image. 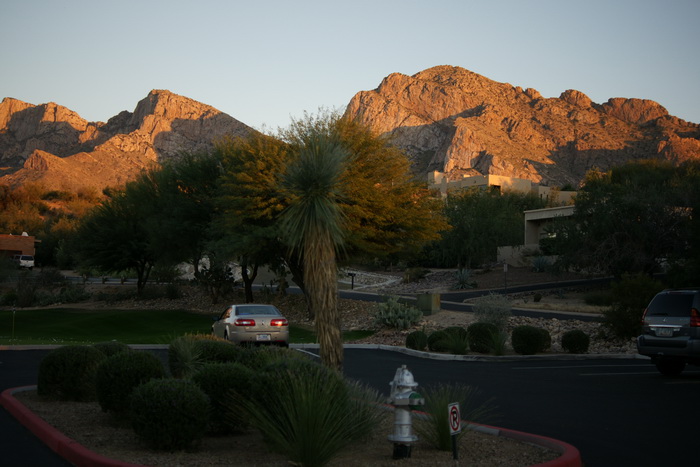 Center sharpness.Below are crops from the image centers.

Center sharpness is very good, even with the aperture wide open.  I see a little veiling haze at F/1.8-2.2 but it doesn’t show up unless viewed at huge sizes.  Diffraction causes softening at apertures smaller than F/8.
Crops from the mid-sections.

The extreme corners look soft between F/1.8-2.8, but sharpen up dramatically by closing the aperture down to F/4.  F/8 is just barely the sharpest at the very edges.  The corners are almost as sharp as the mid-section when stopped down; in fact the whole image looks very sharp at F/5.6-8.  All crops above were taken at infinity focus, about 40′ (13.3m) away.
Lateral color fringing.
I see a very small amount of lateral color fringing along the edges of the image.  Check out the magenta fringe on the right side of the yellow barrel cactus.
Axial color fringing.
This is the axial color fringing I was talking about at the beginning of the review.  This type of color fringing occurs all over the image, not just along the sides, (which is called lateral).  Axial color fringing goes away by stopping down the aperture.  It does show up at F/1.8-2.2, but is almost gone by F/2.8.  This is normal for a fast lens.
Let’s check out the macro capabilities of this lens.

This lens has a reproduction size of 0.25x (1:4) which is one-quarter life size, that’s pretty close.  The Sony DT 35/1.8 is excellent at close focus shots.  F/5.6 was the sharpest at close focus, but F/4-8 looked almost the same.  Wide open to F/2.8 was very soft.  Notice the lack of color fringing.  As a side note; the “1996” on the bottom left of the stamp measures a mere 1mm wide.  This is a very good macro shot, and it looks better than some of Sony’s more expensive lenses at close focus.
Coma samples.

Coma control is excellent, even with the aperture wide open.  Pixel peepers will notice very slight coma at F/1.8-2.2, but don’t forget these 100% crops are taken from the extreme corners!  Exposure differences are from light fall-off.

Sony got caught off guard when Nikon introduced a DX (APS-C) 35mm F/1.8 lens, which quickly became a huge seller.  Around that same time Sony came out with the 50mm F/1.8, but that’s equivalent to 75mm, which is a little long as a normal walk-around lens.  The 35mm APS-C only lenses “see” about the same as a 50mm “normal” lens does on a full frame camera.  I guess people want the same thing as they had “back in the day.”  Well, Sony has now caught up with Nikon and introduced a 35mm “DT” lens of their own, and I’ll say it was worth the wait!

The little Sony DT 35mm F/1.8 SAM lens turned in a stellar performance.  The good points are; center sharpness is very high, even at F/1.8!  The mid-sections and corners sharpen up almost to match the centers at F/5.6-8, so it would make a great landscape/architecture lens.  Color fringing is well controlled overall, and distortion is about average, but has a simple, easy to correct curve.  The Sony DT 35/1.8 makes a great walk-around lens because of its small size, light weight, focal length, and fast aperture.  Now for the bad points; well, there aren’t any bad points, that’s cool!  Nit pickers might complain about light fall-off being a little heavy wide open, but it transitions gradually away from the corners, so it isn’t all that apparent, especially in low-light shots.  The corners are soft at wide apertures, but again, it may not be very noticeable in low-light.  Everything considered; this is a very good lens.

For APS-C only users; Do yourselves a favor; save about $1200 by purchasing this lens instead of the Sony 35mm F/1.4 G lens.   There is a slight advantage in light gathering power with the “G” lens, but the DT 35/1.8 is better at ghosting control, and coma wide open.  I don’t have the “G” lens to compare the two, but based on memory, I’d say there is little difference in sharpness overall, with the “DT 35/1.8” coming out ahead at apertures wider than F/2.8.

Some readers are wondering which lens is better for them when using an APS-C camera, the new Sony 35mm F/1.8, theSigma 30mm F/1.4, or the Minolta 35mm F/2.  I don’t know which one is best, it all depends on what’s important to you, but here’s my quick take; my review copy of the Sigma 30mm was pretty sharp in the centers, but very soft along the sides, even stopped down; on the other hand, It’s 2/3 of a stop faster than F/1.8.  The Minolta 35mm F/2 is sharp all over, but suffers from poor ghosting control, and is much more expensive than the Sony 35/1.8.  If high optical performance with a low price tag is important, the Sony DT 35mm F/1.8 SAM is a no brainer.

Bottom line; this is a five star lens when you consider the optical performance and price point.