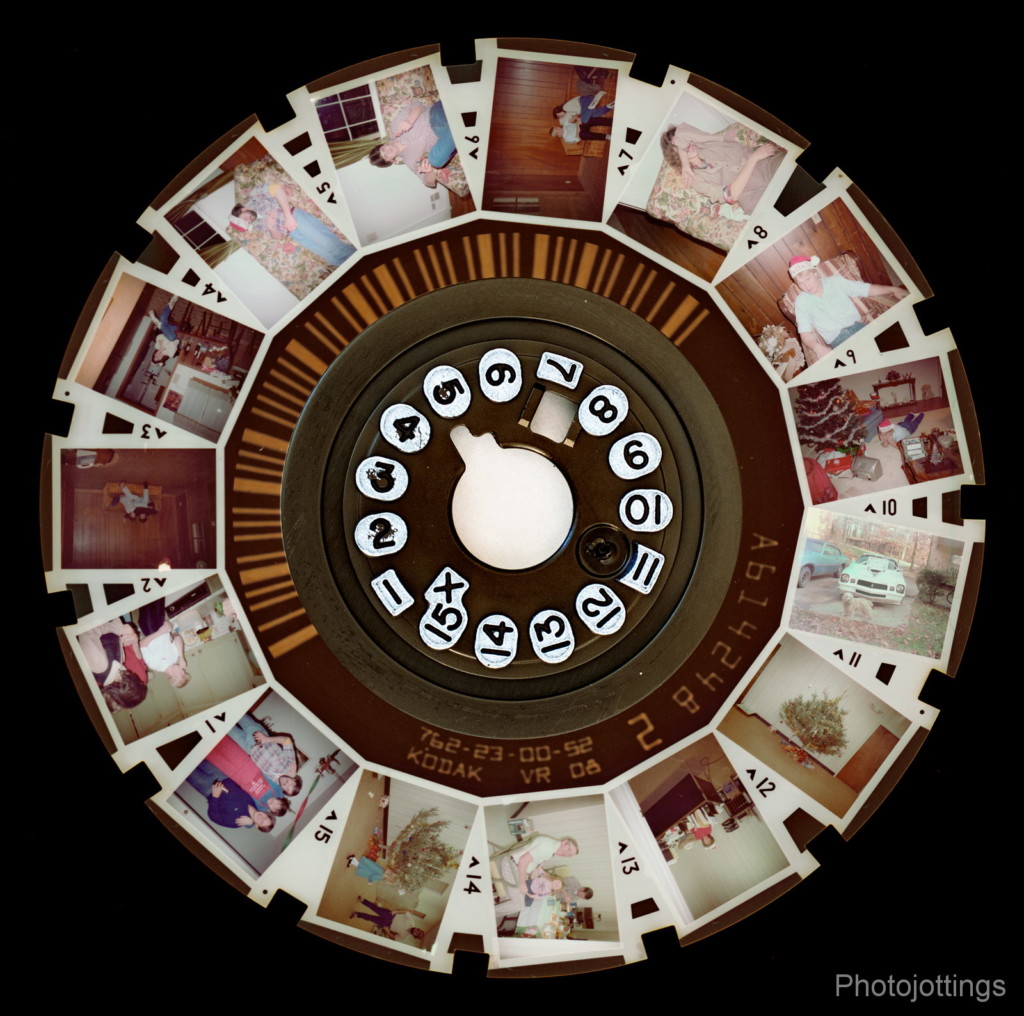 Today I have a few Kodak Disc negatives to share.  This small format film (about 1/10 the size of 135 format) has been widely ridiculed since it came out in the early 1980s, and it continues to this day, but is Disc film really that bad, and will it even make a decent small print?

Each Disc negative is 11x8mm¹, and 110 is 13x17mm, so the 110 format has over 2.5x the area of Disc negatives, that’s about like going from 135 format to 6×4.5 medium format.  There are some differences other than size though.  For instance, the aspect ratio of Disc film favors a 3.5″ x 4.5″ print, (standard print size), and 110 a 4×3″ print, although both were printed at the same size probably for economic reasons.  Additionally, Disc film is noticeably thicker than roll film like 110, so there is less chance of wavy film as it passes across the gate and under the pressure plate.  Flatter film means more consistent sharpness over the whole image, and the entire Disc, and that would theoretically mean a cheap lens on a Disc camera might outperform a good lens on a 110 camera, and you’d get the same basic image quality, but in a smaller package; well, I guess you can be the judge of that when you see the samples below. ¹Kodak officially says 10.6mm x 8.2mm on the back of the box.

But before we get to the samples, let’s take a quick look at some Disc film, and how it’s packaged.  Note; the featured image above of the Disc has been enhanced to show the pictures as positives, but they actually look like regular negatives, as the sample shows below. 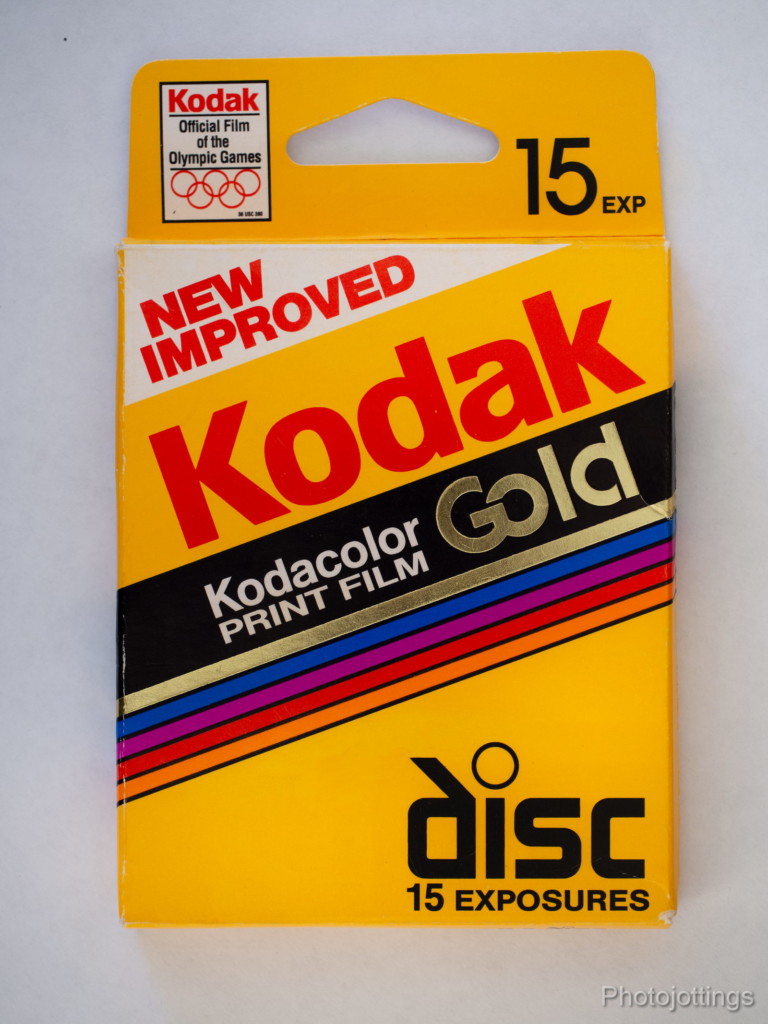 This is packaged for resale Kodak Disc film.  Initially it was called ‘HR’ and then ‘VR’ film, and finally Kodak went with ‘Gold’ before they discontinued it.  The box above expired in 1998.  Prices were around $3.49 for one Disc, and $5.99 for a two pack in the mid to late 1990s. 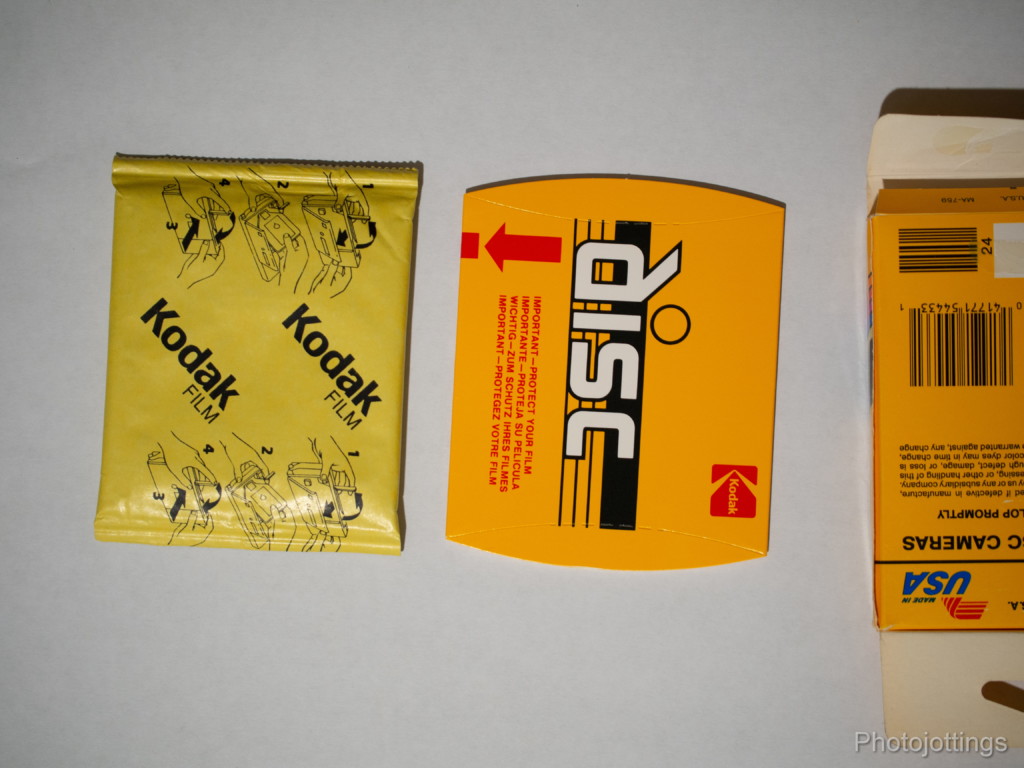 When you open up the package, this is what you’d see, at least with Kodak Disc film.  The Disc is in the foil envelope, and when finished you put it in the cardboard slip and had is processed. 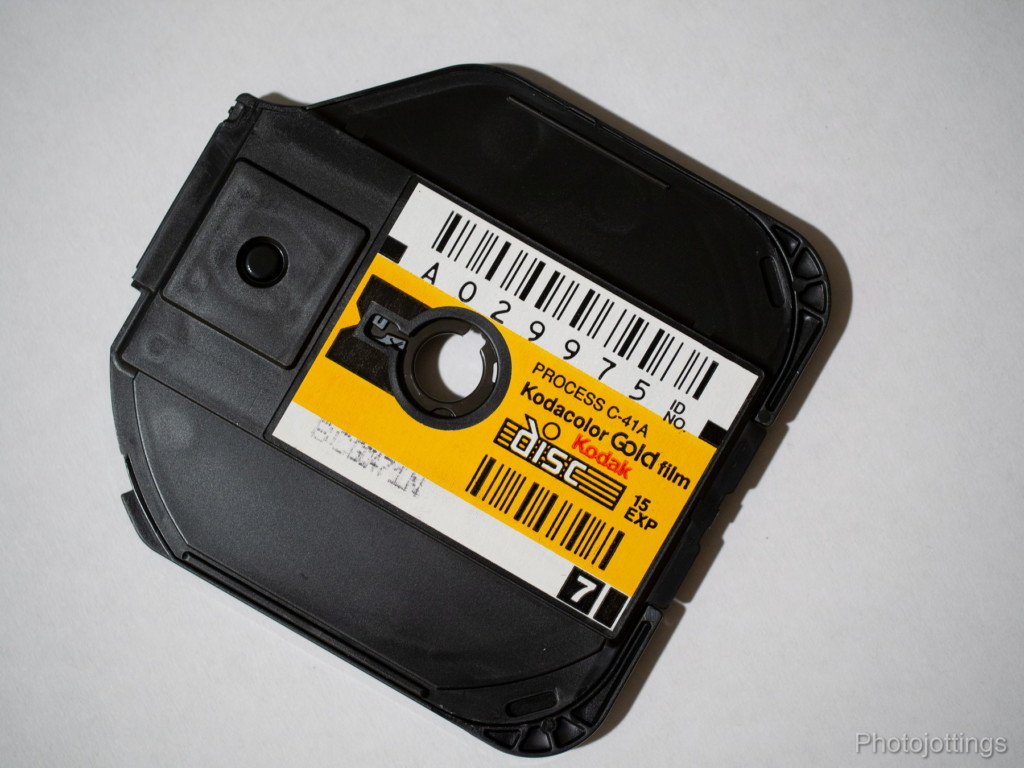 The actual Disc is inside this case, you put this in your camera. 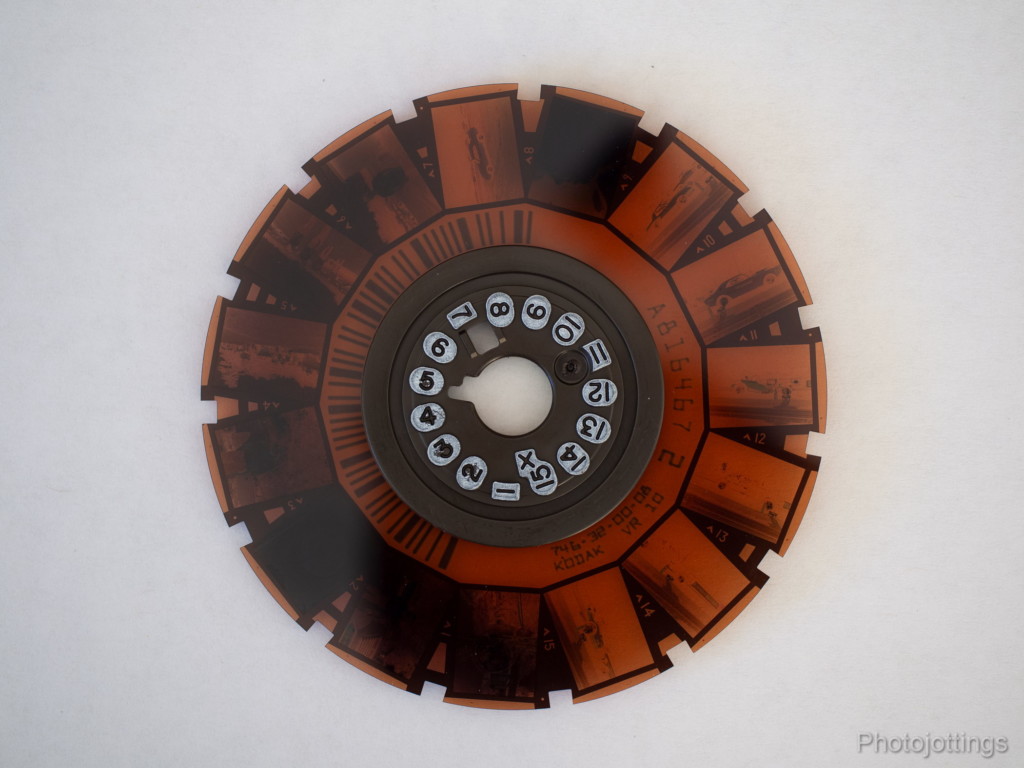 This is the Disc as you would get it back from the developer, and not what you see in the featured image at the top.  This is Kodak ‘VR’ film from 1984.  The black on white numbers would show through the back of the camera and let you know how many exposures you had taken.  The little negatives where arranged around the 65mm diameter Disc, and rotated 24° between each of the 15 images. 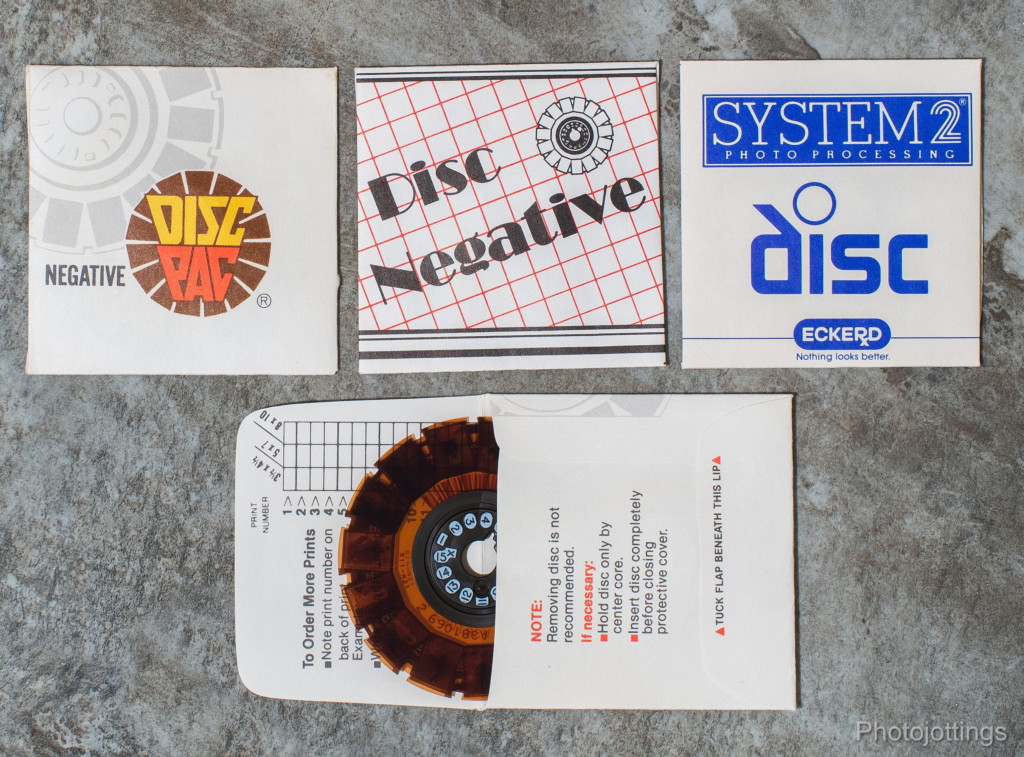 Pictured above is an assortment of negative envelopes from various sources.  Notice you can get prints from 3-1/2″ x 4-1/2″ (original size?), up to an 8×10″ print; eh boy, I wonder how that would look?

Here are some samples from 1984 using Kodak VR film.  I don’t know the place or people here, but it may be somewhere in the vicinity of New Jersey or Massachusetts.  Camera make and model unknown.

I flat scanned these on the Nikon 9000, and they show all the detail present in the images at these sizes. 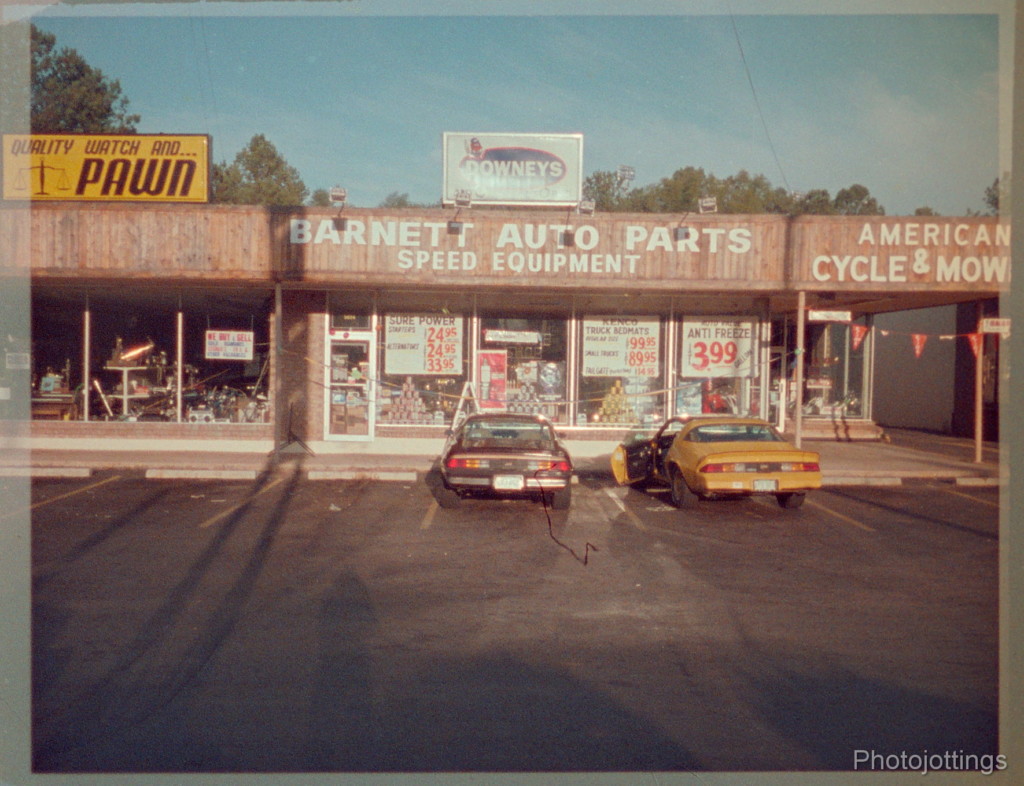 Barnett Auto Parts and Speed Equipment.  I’m guessing the person that took the picture was driving the yellow Camaro.  This image was scanned outside the image area; It looks like the Discs were pre-exposed by the factory like 126 and 110 film, and may have been used as a guide for printing; Kodak actually states the negative size on the back of the Disc box is 10.6mm x 8.2mm, so the printed pictures were crops from inside the borders. 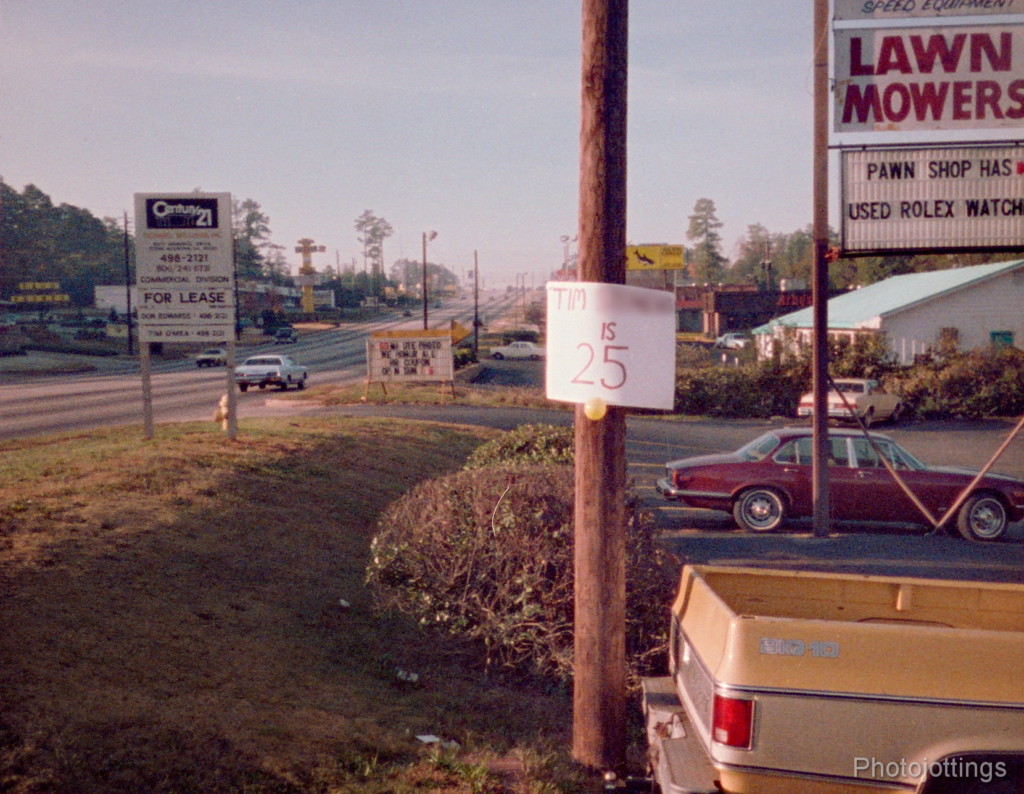 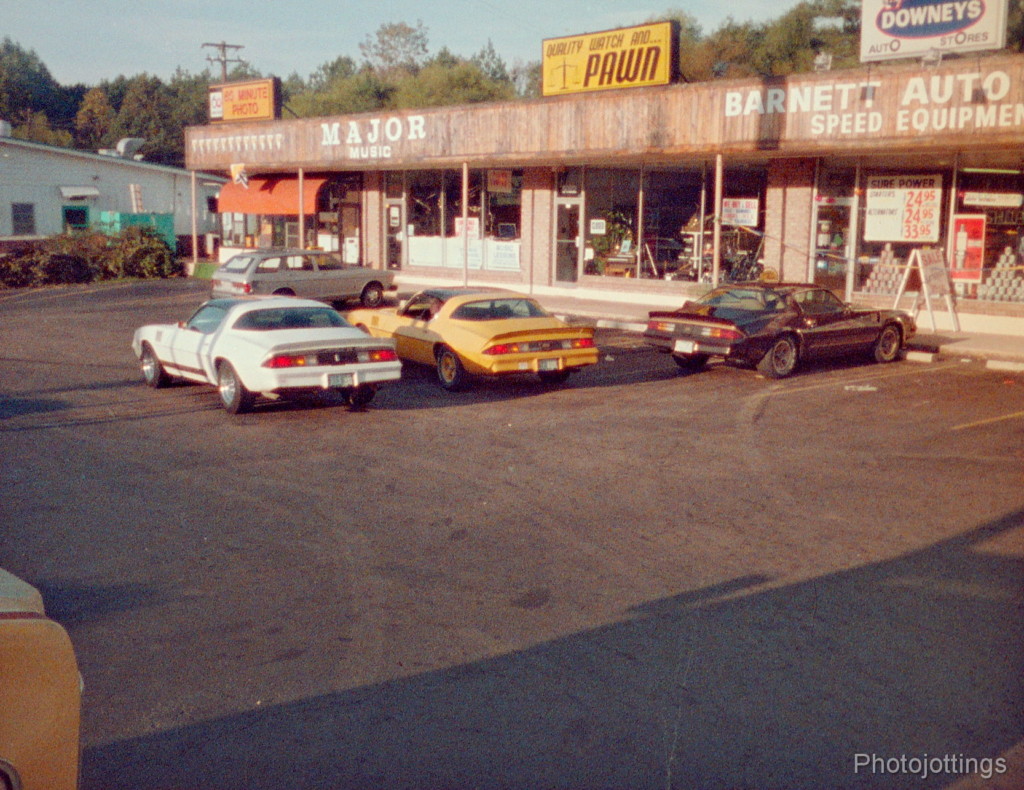 It must be Camaro day at the Speed shop, it looks like two, or maybe three late 1970s Z28’s getting ready to drag race.  And they did, but the pictures were dark and taken at night, and aren’t worth showing. 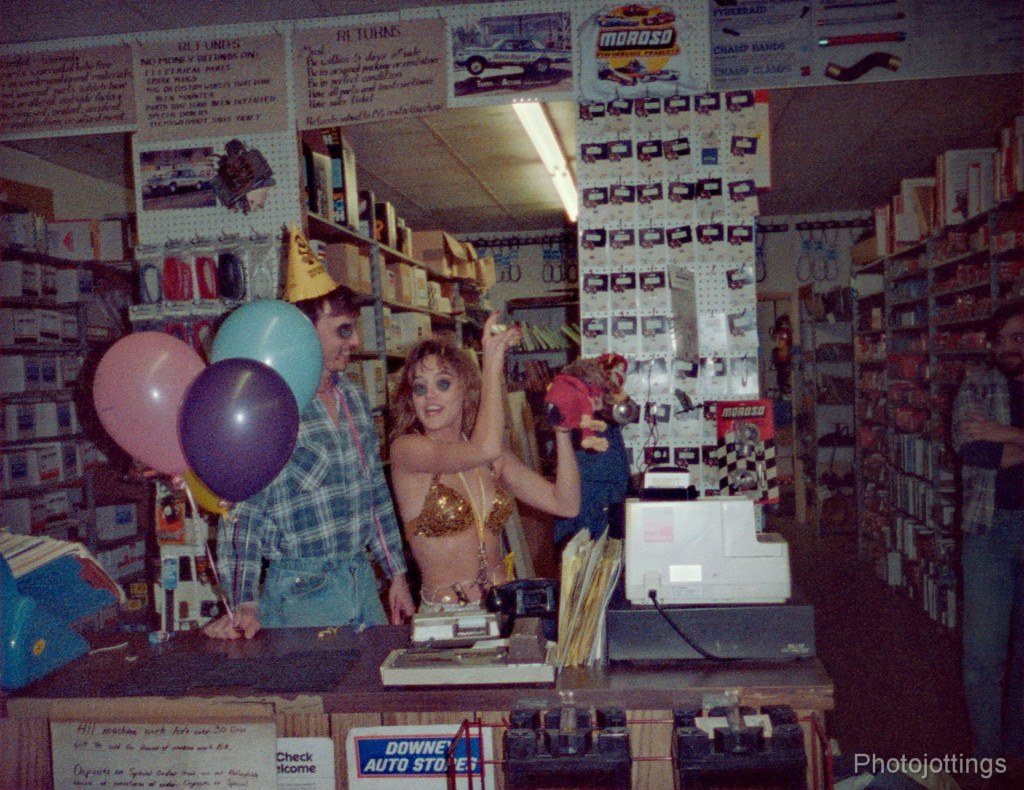 The Auto Parts and Speed Shop were having a birthday bash for this guy, and the gal is the deliverer of gifts.  Later on things got a little bit raunchy, like normal young kids do when having a party.  Eyes blobbed out in case they’re not interested in being featured here, and I don’t know these people. 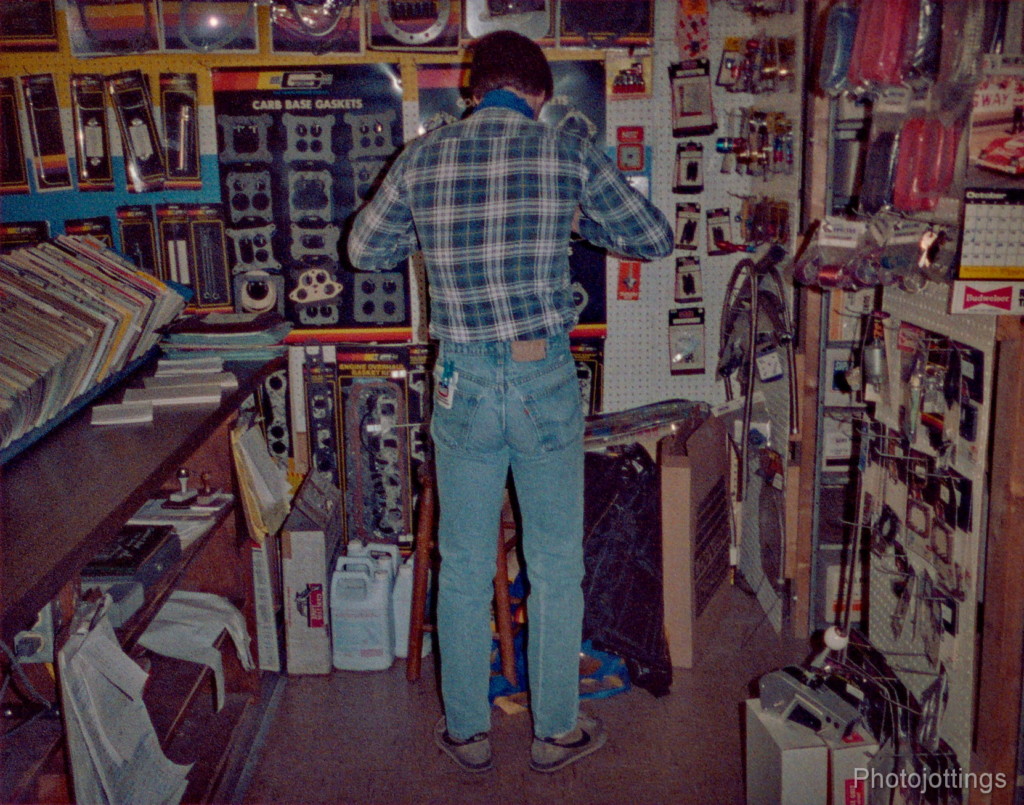 One for the ladies.  I thought pocket protectors were for the shirt pocket?

So that’s all the samples for today, I have a whole bunch of others, but they’re all of people, and as I said, I don’t know who they are, so I won’t show them.  Whatever camera they used for these pics, it worked quite well, especially for people pictures with the flash, that’s pretty much what the format is for and they would make good small prints.  I’ve noticed that most of the cameras seem to have a focal length of 12.5mm or 15mm, with a four element F/2.8 or F/4 lens.  The crop factor for Disc film is 3.18, so the ‘equivalent’ focal length in 135 format is about 40mm, and 47mm.

As I look over the dozens of shots from these discs, it seems the technical image quality is about as good as a cheap 110 camera, like this one, or here.  Supposedly Kodak used high quality lenses with an aspherical element(s) in all their Disc cameras, but I don’t know for sure.  One thing I do know is those Kodak Disc cameras were pretty expensive, I was looking for a cheap camera at K-mart when I bought this one for about the same price as the cheapest Disc camera they had.

In the end, the Disc system is capable of making a good small print, enough to keep those memories alive just like we see above, and it was small and pocketable for the time.  Of course, as we look back now we think we made a bad choice, and should’ve used a 35mm, but there’s no going back, and one should be thankful for having a camera available to capture those Kodak moments long ago.

That’s it for the Kodak Disc information and sample page, I’ll update it with some extra pictures and a camera review if I can find a decent working copy.  Thanks for stopping by!