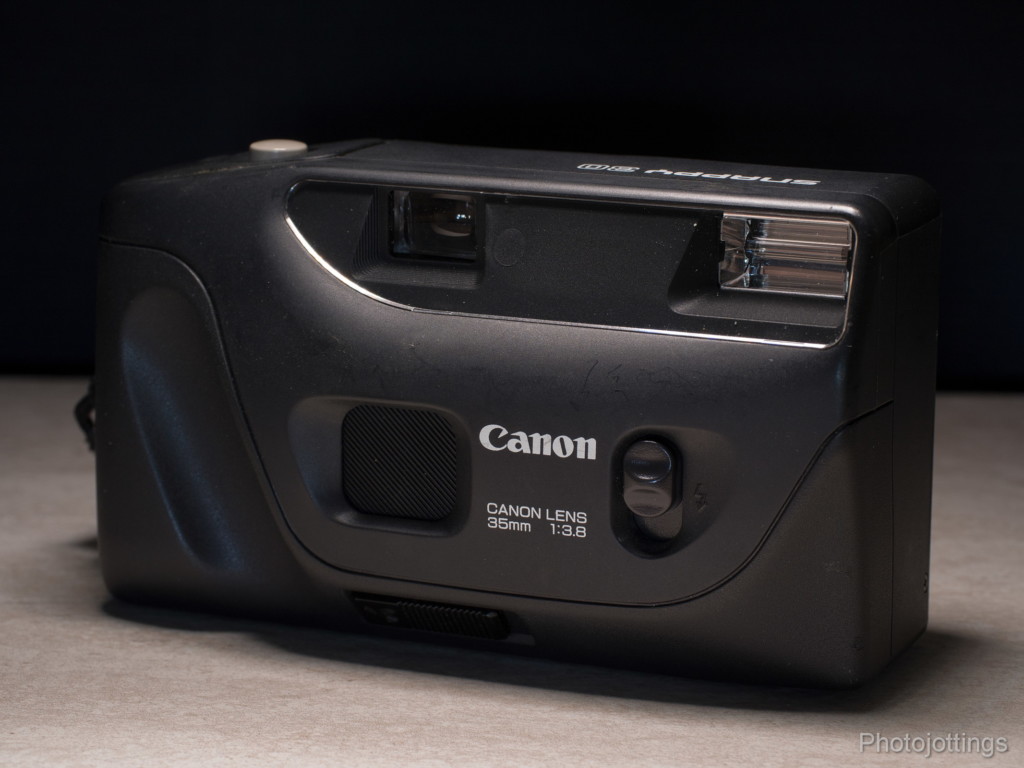 I bought this weeks review camera brand new in 1989; it was a K-Mart blue light special blister-pack model and I think I paid about $45 for it.  I wanted to take some pictures of a house I was renovating, and did not have any other camera available.  At the time I thought I’d take a few rolls of what I needed, toss it in the drawer, and eventually it’d head to a garage sale or dumpster.  When I bought it way back then I didn’t think I’d be using it almost 30 years later.  I still get a kick out of running a roll through it every once in a while; the technical image quality is pretty good, about the same as a top line $900 cell phone camera, but much quicker and easier to operate, and a whole lot less expensive; pick up a nice copy on ebay for less than $10, or even less at a garage sale.

Oddly, I can’t seem to find a single page of information on Google for this particular model, even when scouring the Canon Museum site.  I see plenty of Canon Snappy ‘EZ’ and Prima Juniors, but they do not exactly match my model, and have slightly different features.  It looks like the Snappy 30 is a stripped down version of those models.

So is this a super rare model, made only for a brief period by mistake?  Or was it so awful that Canon doesn’t want to remember it?  Either way, let’s take a closer look at the Canon Snappy 30.

Manufactured by; Canon Inc. Tokyo, Japan.  Made in Malaysia.

Original print size; standard oversize prints 4” x 6,” at this size any setting used will look excellent, but maybe not flash pictures unless the subject is about 10 feet away.

Approximate resolution; will make good 8″x 10″ prints when the aperture is set to F/8, and excellent at F/11+.  Decent 4″x 6″ prints at the widest aperture with flash.

Color fringing; not much noticeable.

Viewfinder; bright, but no guide lines or parallax correction.

Accessories for this model;  none, but it came with a roll of Kodak 200 film, a hand strap and instruction manual.

Good features; three apertures to choose from, flash, and fixed focus, so the camera is ready to shoot instantly. 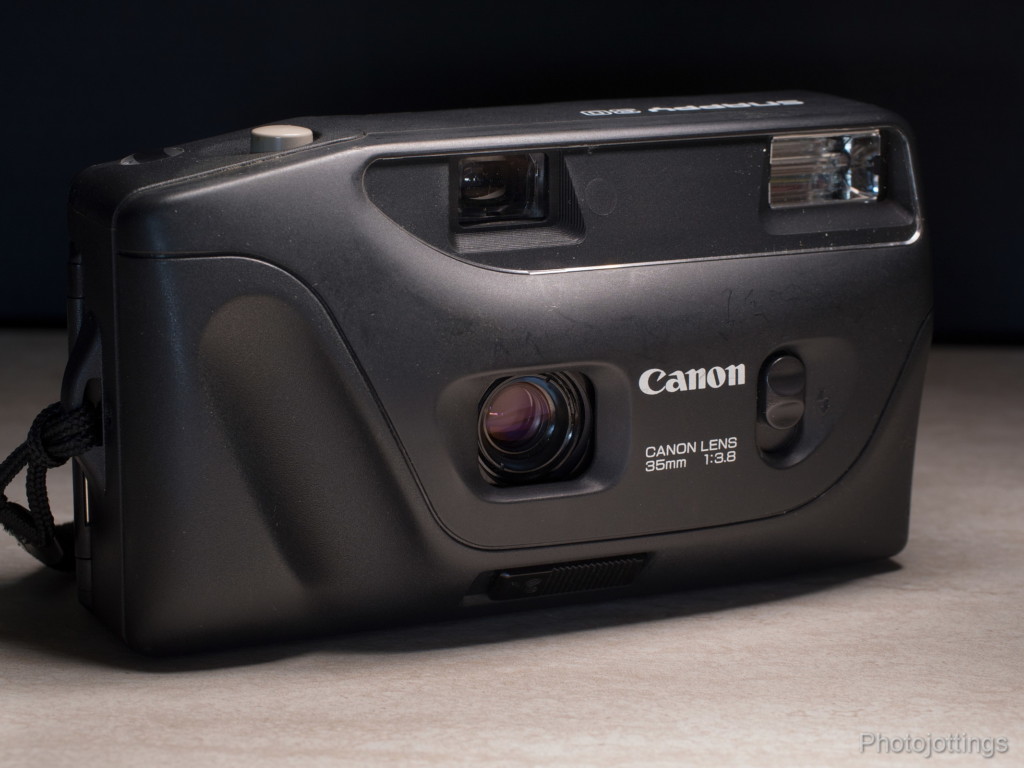 The Canon Snappy 30 shown with the lens cover open, which mechanically allows the shutter button to be pushed.  The sliding button on the right is for the flash.  The faint little solid semi-circle to the right of the viewfinder is a space for more advanced models with a low light flash warning, I think it’s a red light you can see through the viewfinder warning of under exposure. 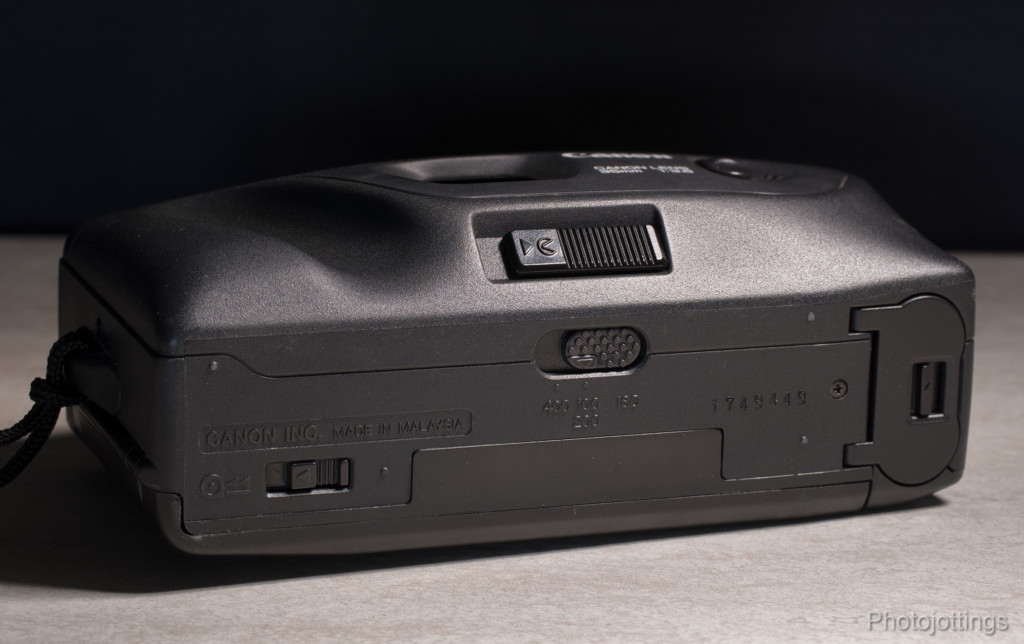 The lens cover slider is under the lens.  The ASA button is on the bottom middle, and is really an aperture selector.  In the 100-200 setting, the aperture is F/8, and at 400 it stops down to about F/11-16.  The battery cover is to the far right; it takes two AA’s.  The little slider on the left is for rewinding the roll.  Unfortunately, there is no tripod socket. 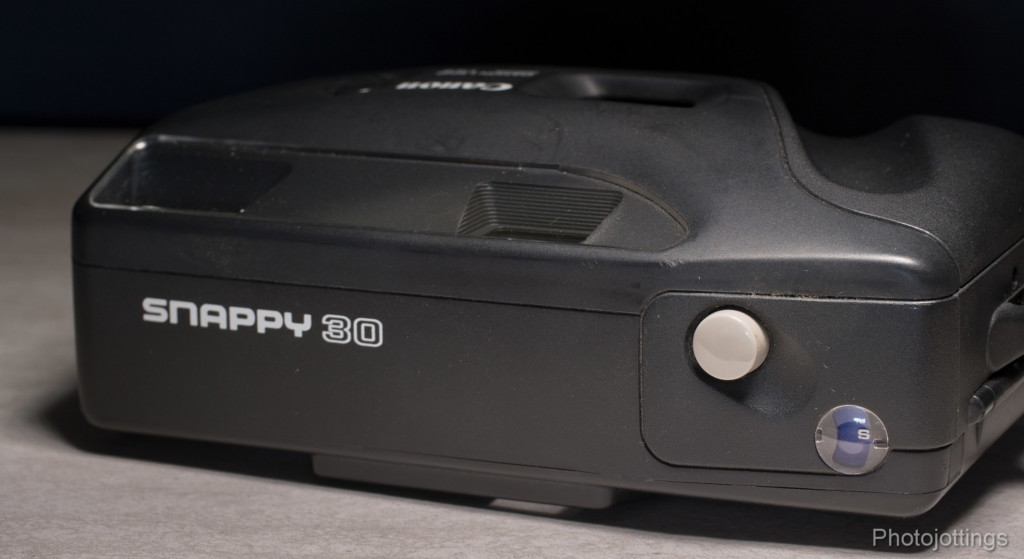 On top we have the shutter button in off-white, and the progressive type shot counter in blue, which resets itself when you open the back. 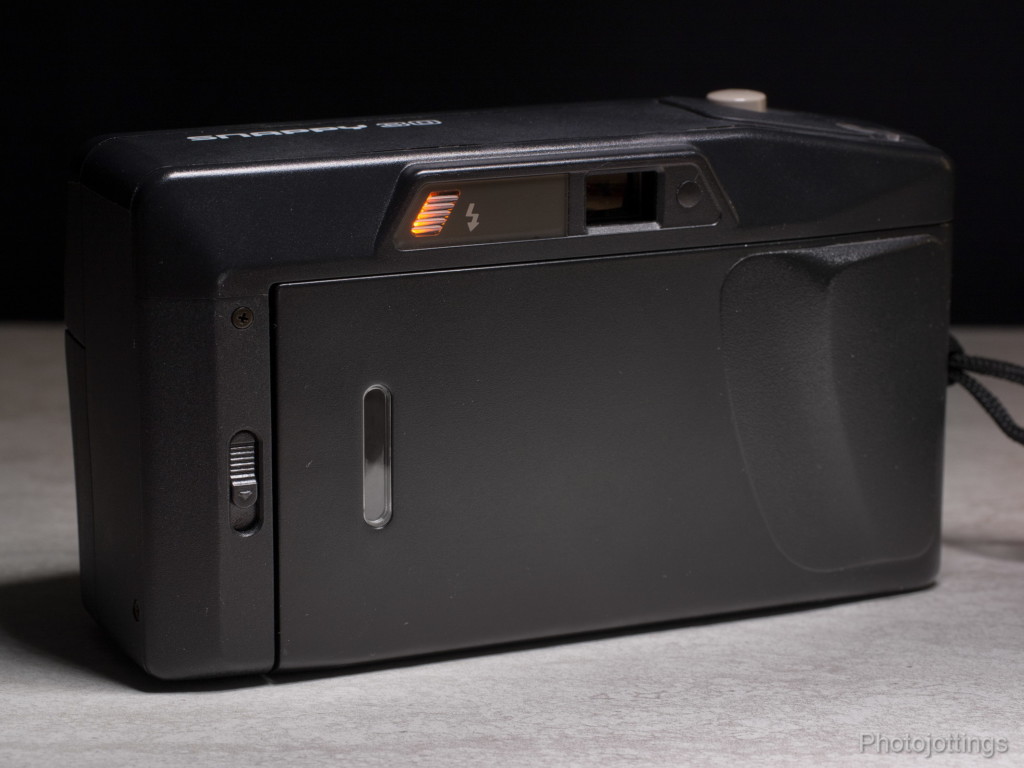 On the back side we have the viewfinder, which is sufficiently bright, with no guide lines, and a flash ready-light beside it.  The window slot on the back cover is a film reminder.

With the back open you can see the camera has some decent features like a real film pressure plate, a spring steel film tensioner and black felt inside the light chamber. 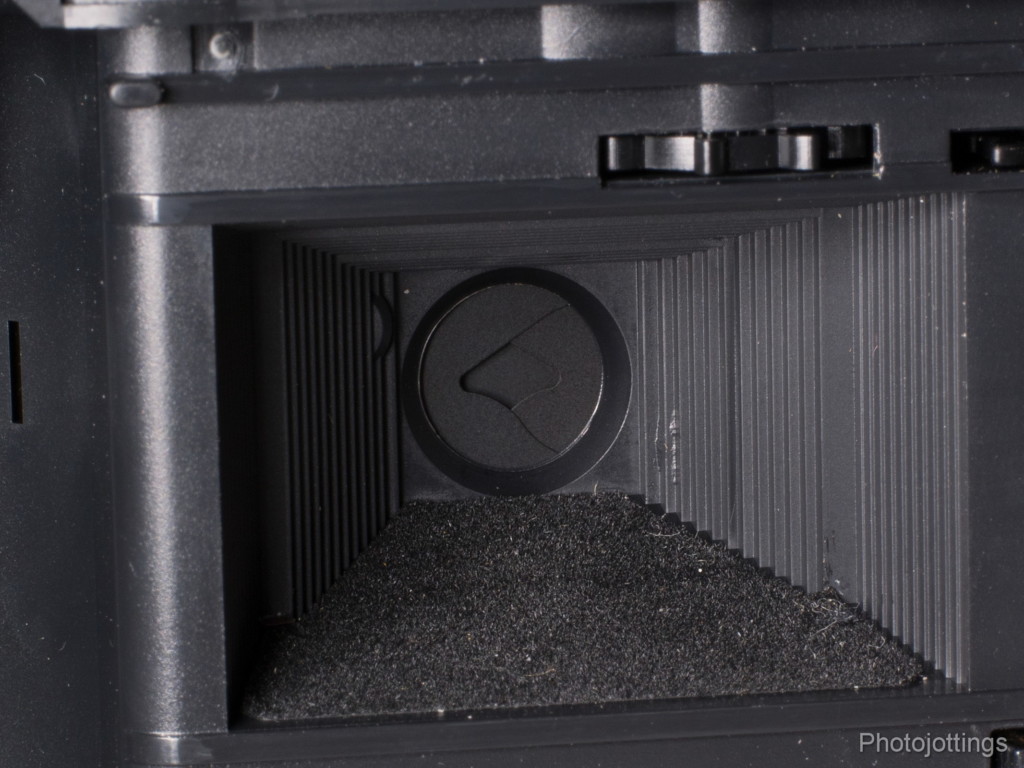 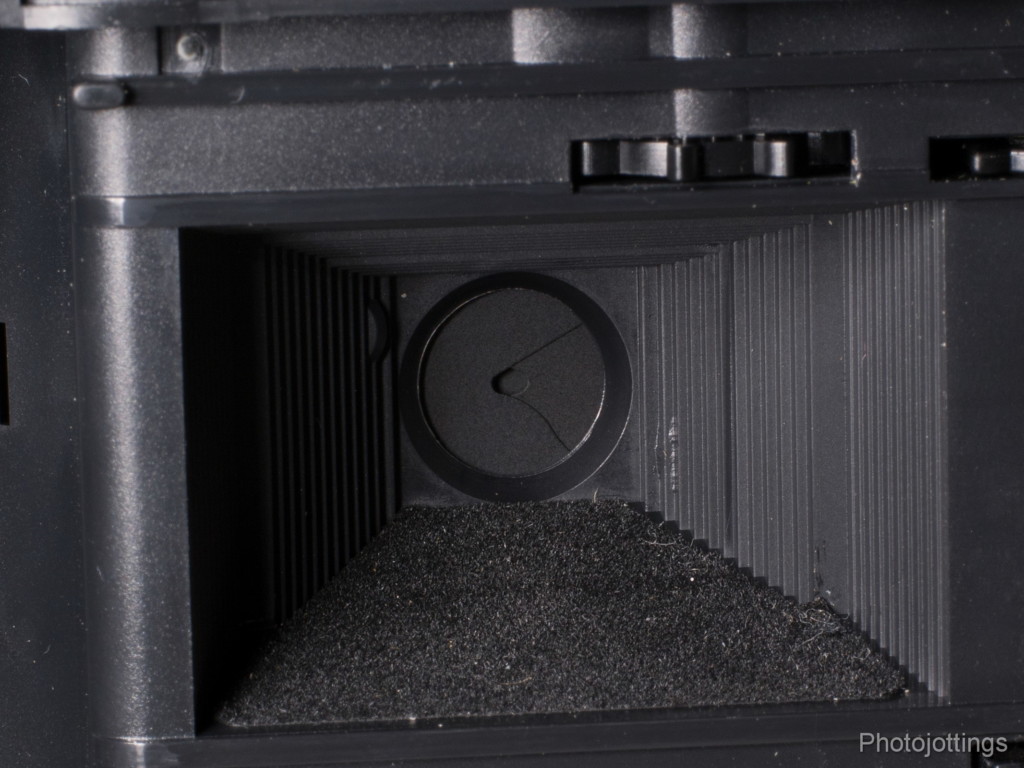 This is the aperture size when switched to ISO 400, and seems to be at least a stop less than the opening above; or maybe two. 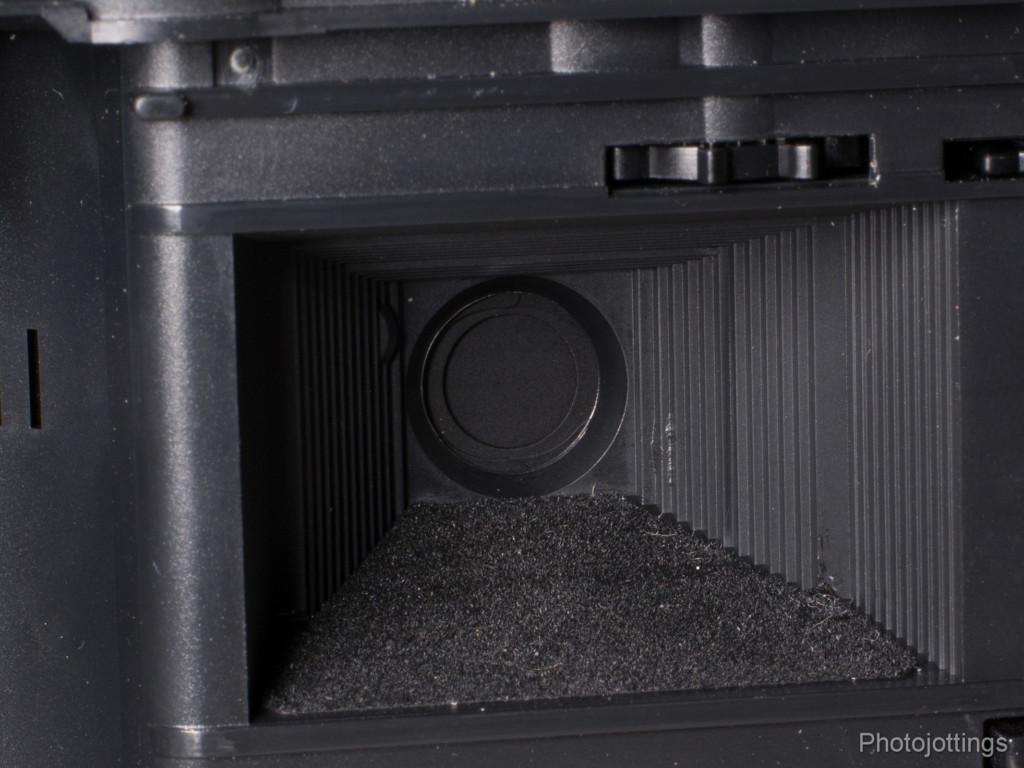 Here are some test images scanned on a Nikon Coolscan 9000 ED.  All are 3000 pixels wide; there is no additional resolution from scanning at a higher sample rate.  Click for larger images. 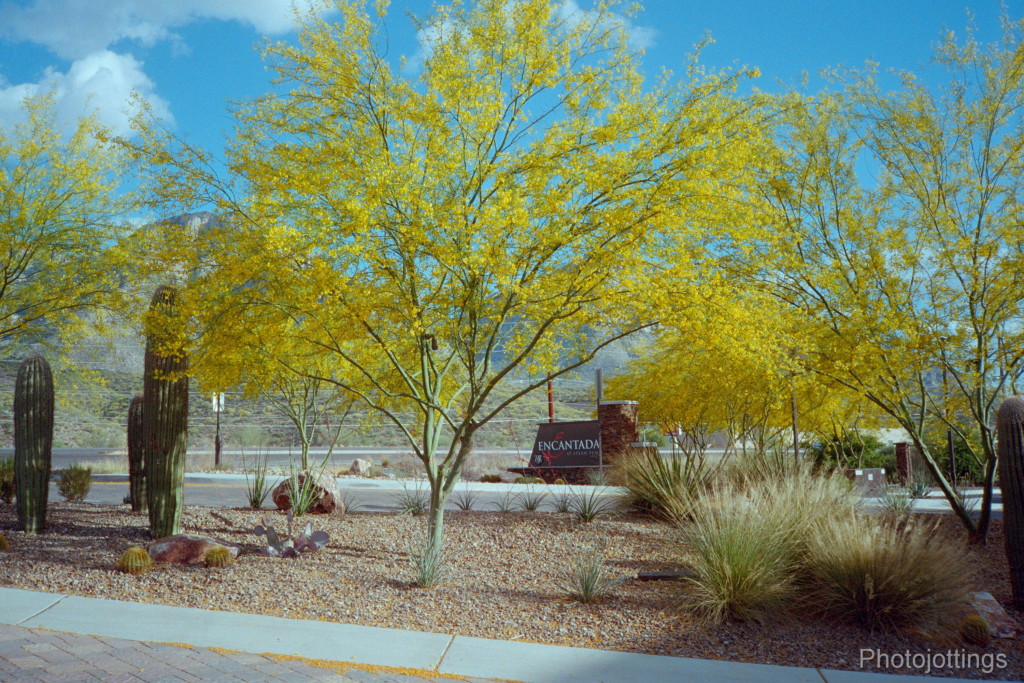 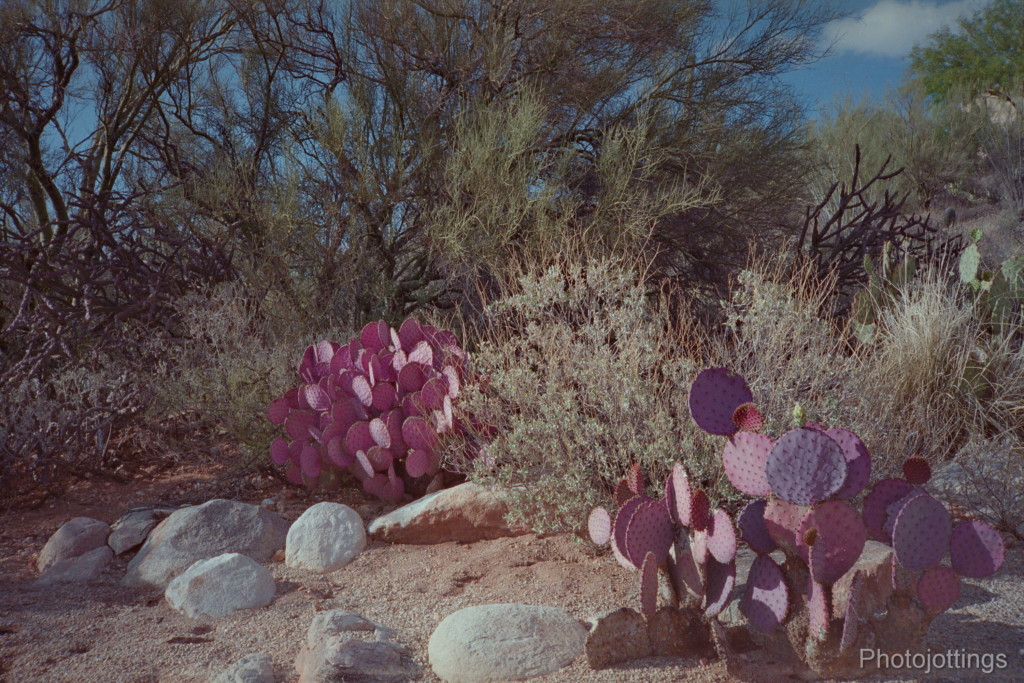 Santa Rita Prickly Pear.  Taken at ASA 400 using Fuji Superia 800 film.  Distance is near 10′ (3m), which is about where the focus is set, that’s why is looks really sharp. 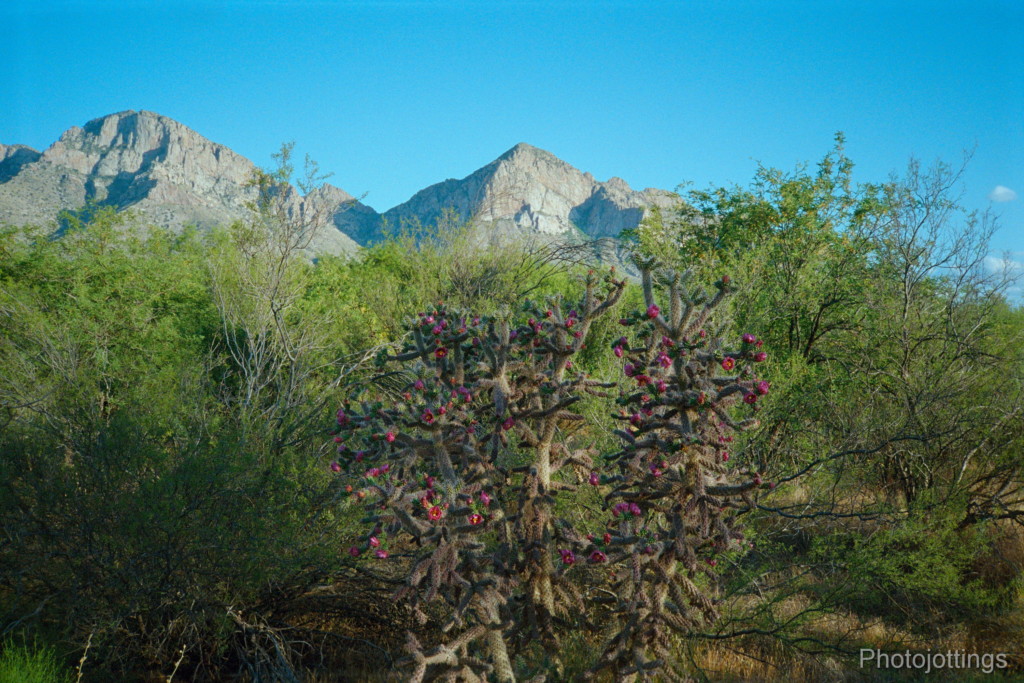 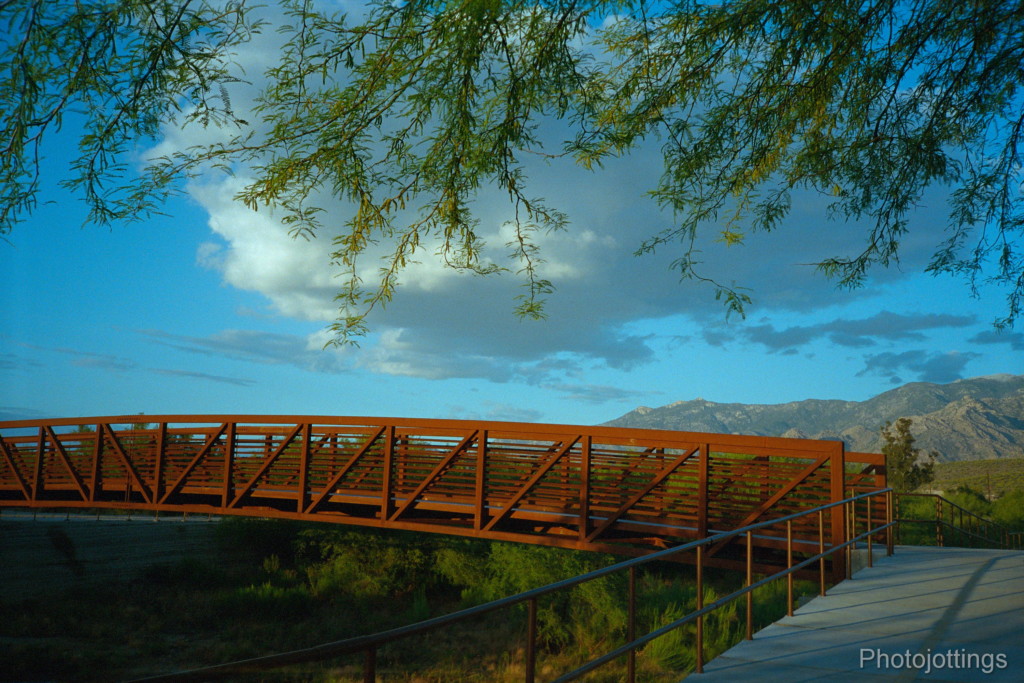 A bridge to nowhere.  The sun is low on the horizon, and I should’ve put the camera on the ISO 100-200 setting to allow another stop of light for a brighter exposure.  Taken at ISO 400 using Kodak Max 400 film. 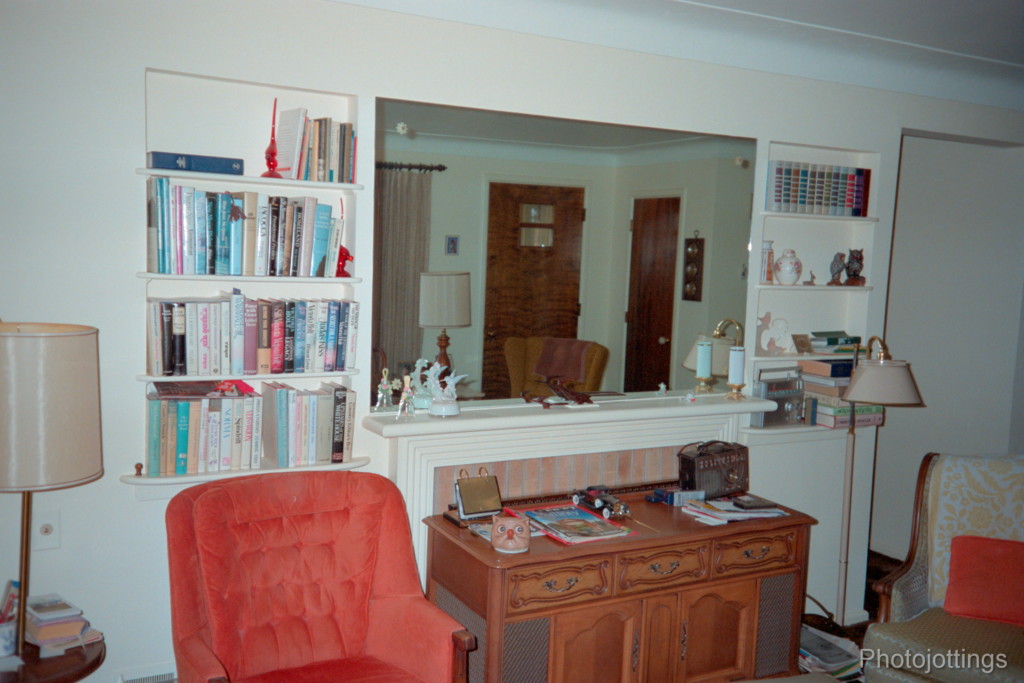 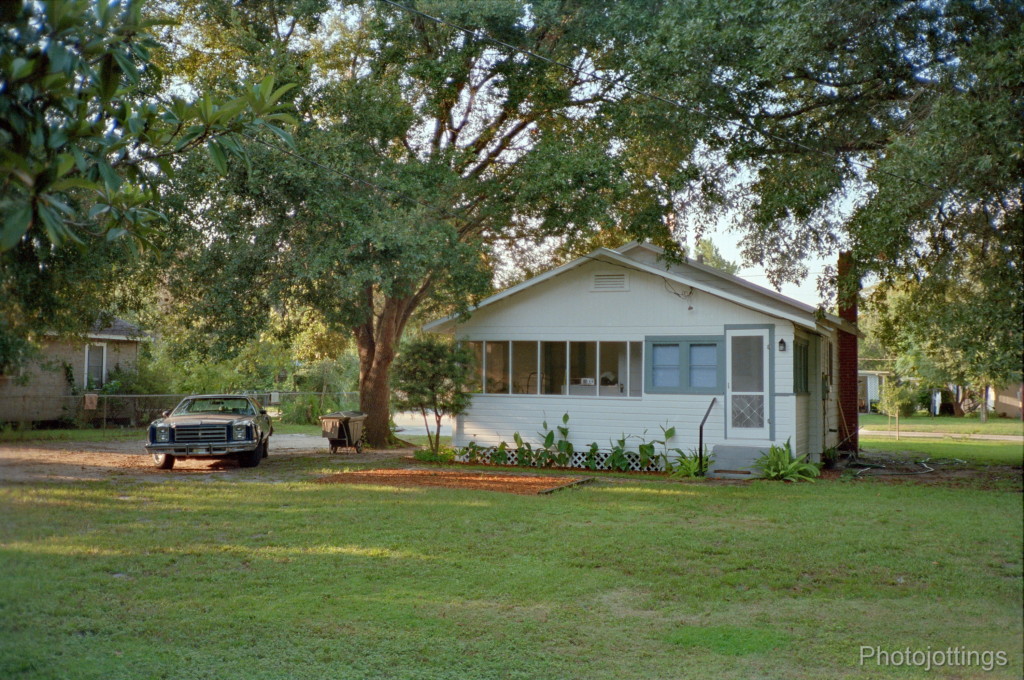 Monte Carlo in the sunshine state; this was shot at ISO 100-200.  Here you can see the sides are not as sharp as the others above.  The effective aperture here is F/8.  Kodak Gold 200. 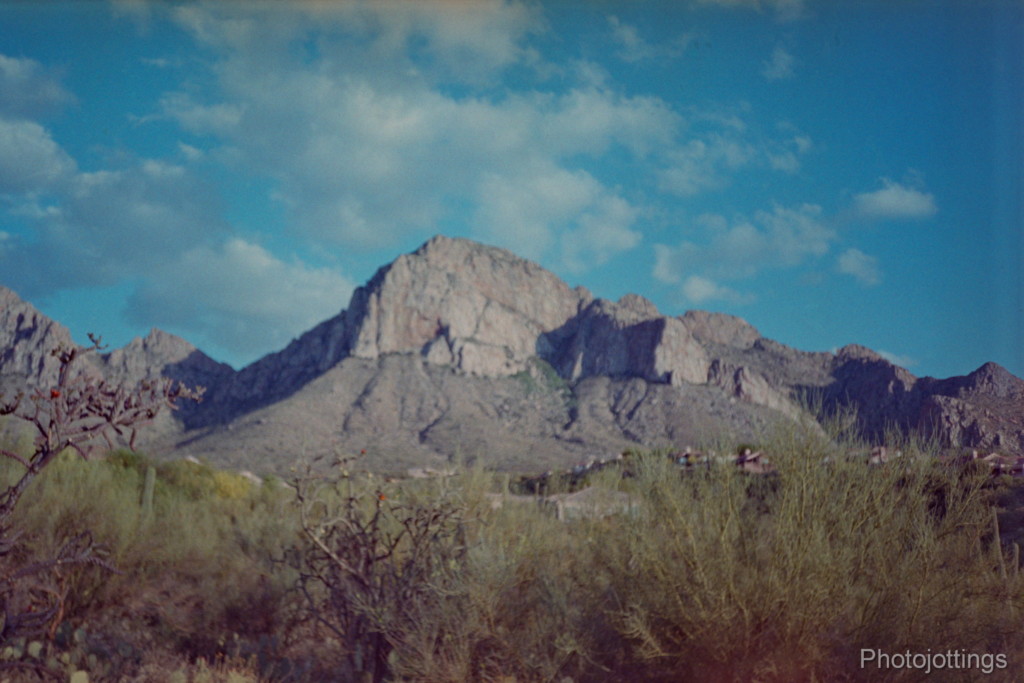 This image was taken with the flash on, and the ASA set to 100-200.  Effective aperture is F/3.8.  As you can see, it’s really soft and has poor contrast when taking landscape type shots, however, if you place a subject within flash distance, the image looks much better, see interior image above.  Notice the the very sharp part of the image on the extreme right side, must be the lens elements are not set correctly. 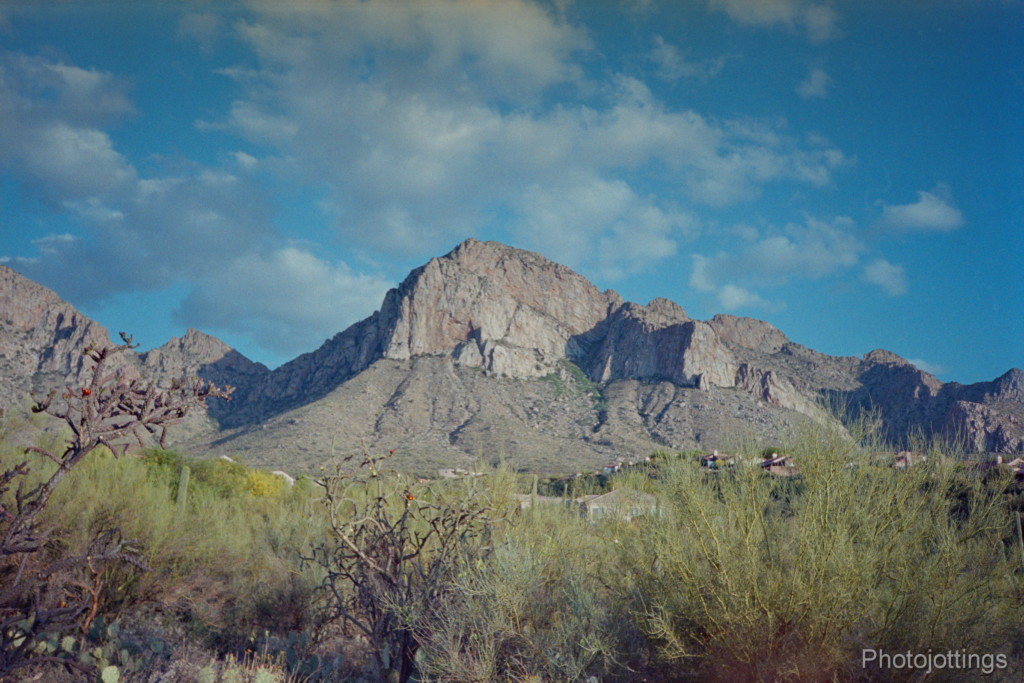 Here we have the ASA set to 100-200, with the flash off, for an effective aperture of F/8.  The image is much sharper overall, with improved contrast. 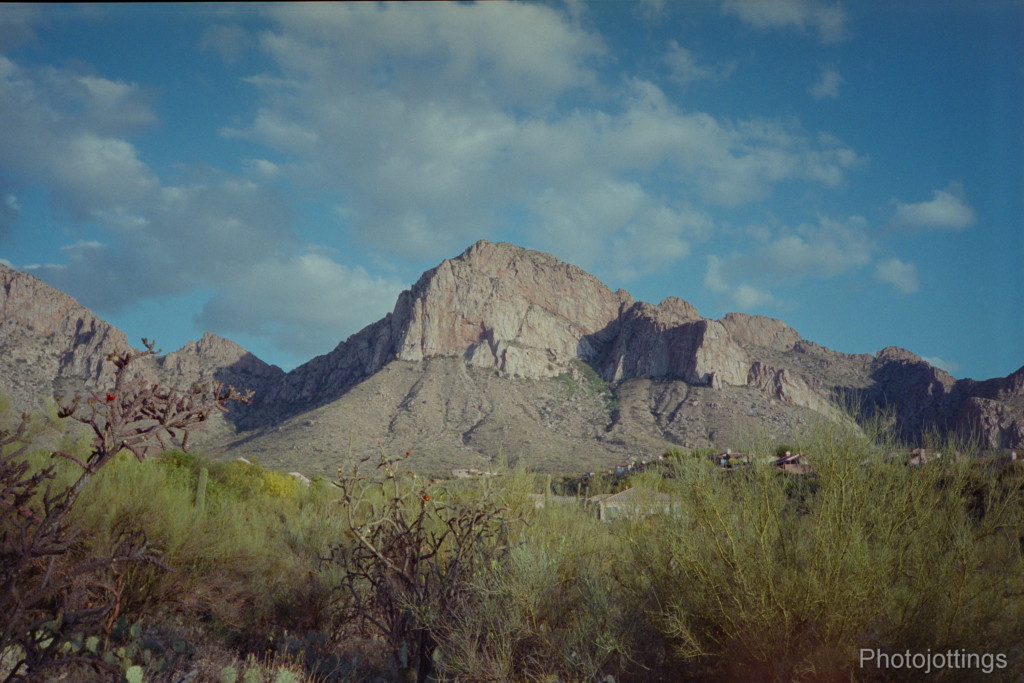 Now I’ve set the ASA slider to 400, the aperture is now about F/11-16.  This image is quite sharp all the way around, and would make an excellent 8×10″ print if one wanted to waste ink on this photo.

The Canon Snappy 30 was close to the cheapest 35mm camera you could buy back then, at least brand new; I was broke and needed a camera, so I walked into K-Mart and picked this one out.  I actually like this simple little camera, when set to ISO 400, it’s pretty sharp all over, and would make some nice 8″x 10″ prints.  I guess that’s why I still have it.  Plus, it’s really easy to use, just plop in a film cartridge, stick the leader into the take-up spool, close the back and you’re all ready to go.  You need two AA batteries for the camera to work, but the auto advance and flash are nice features.

The Canon Snappy 30 is not quite as small as the Olympus XA or even the Nikon 35Ti, but it’s very light-weight and fits perfectly in a jacket pocket.  Other things I like about the Snappy 30; you never have to worry about missed focus or spending time trying to manually focus.  It’s always ready, just slide the lens cover open and start shooting!

For the sharpest shots, use ISO 800 film, and set the camera to ASA 400.  Also, when it’s cloudy, or you’re in a low light situation, slide the ISO switch to 100-200 for at least a full stop of extra light, and if things get really dark, turn on the flash, (make sure the ISO setting is at 100-200).  If you don’t want the light from the flash on your subject, just put your finger over the flash and take your snap.

Hope you enjoyed the review of this rare and intriguing camera!