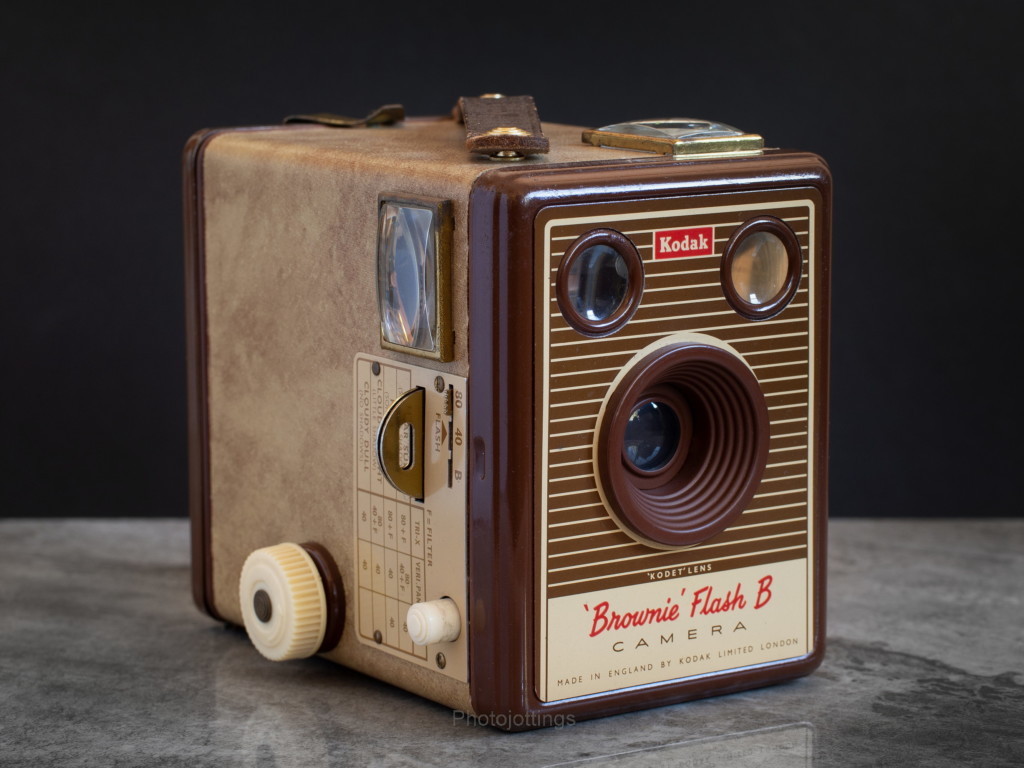 Today we review the Kodak ‘Brownie’ Flash B, also known as the ‘Coffee and Cream’ Camera due to the mottled tan and brown color scheme.  The Flash B from Kodak London has some unusual features for a box camera, like a two speed shutter, a built in close-up lens and yellow ‘cloud’ filter.  It also feels quite solid and well made.  I think it’s a neat looking camera, that’ why I bought it.

I purchased this Brownie Flash B a long time ago, maybe in the mid to late 2000s, at which time I took it for a spin with some Kodak Tmax 100.  Unfortunately, even with the two speed shutter, I couldn’t seem to hold the camera steady, and so most pictures came out blurry; maybe I’ll retest it someday, but for now I like to look at it on the shelf.

The Kodak Brownie Flash B takes 620 film, and you get eight 2¼ x 3¼ (6x9cm) images per roll.  Normally, that size of a negative would give you sharp images for enlarging, but the camera has a relatively large fixed aperture, so the depth of field is limited, and the single element, non focusing meniscus lens doesn’t help matters.  However, with that said, it is fun to use, and works well for people pictures with the built in close-up lens.

Name; Kodak Brownie Flash B, a similar camera is the Kodak 620 model F.

Manufactured by; Kodak Limited London, made in Harrow? England.

Box contents; camera, and a carrying case with the ‘outfit.’

Prints; originally about the same size as the negative, so they looked nice and sharp.  They will enlarge to 5×7″ and still look acceptable.

Approximate resolution; about the same as a 2-3mp camera with a low-fi lens.

Crippling features and omissions; image sharpness is sup par at the fixed F/11 aperture; it should’ve been at least F/16 to get a decent depth of field.

The single element meniscus type lens has a built in conical stepped hood.  The two ‘eyes’ above the lens are part of the viewfinders.  The camera has a screw and prong type flash attachment on the left side.  Kodalight flashholders with this style mounting system works with the camera. 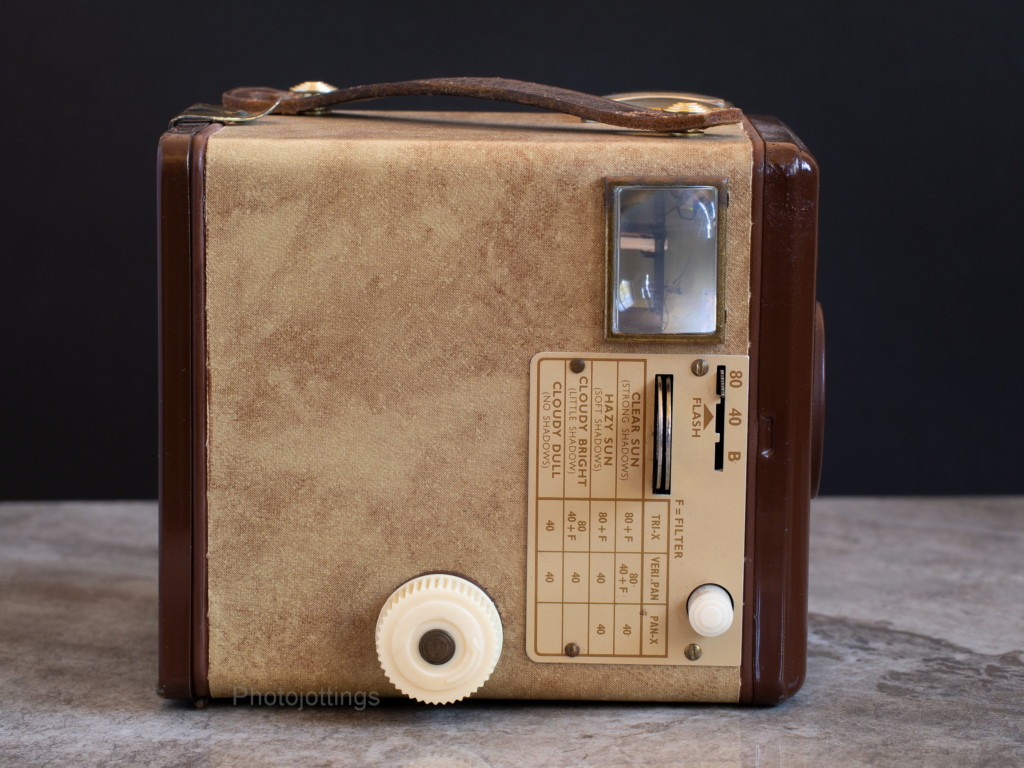 On the right side of the camera we have the exposure controls.  You can set the shutter to instant, at 1/40s, or 1/80s, or ‘B’ bulb mode which keeps the shutter open as long as you push in the shutter button. Unfortunately, there is no cable release option, or tripod sockets.  The exposure guide plate shows you where to set the shutter for different types of film and when using the yellow filter.

The large white plastic film winding knob has an arrow to indicate the proper winding direction.  The shutter button is the little round white plastic item in the bottom right corner; it’s push and release for instant shutter speed.

The two silver flat slides are the close-up lens and yellow cloud filter; here both are in the pushed in, (unused) position. 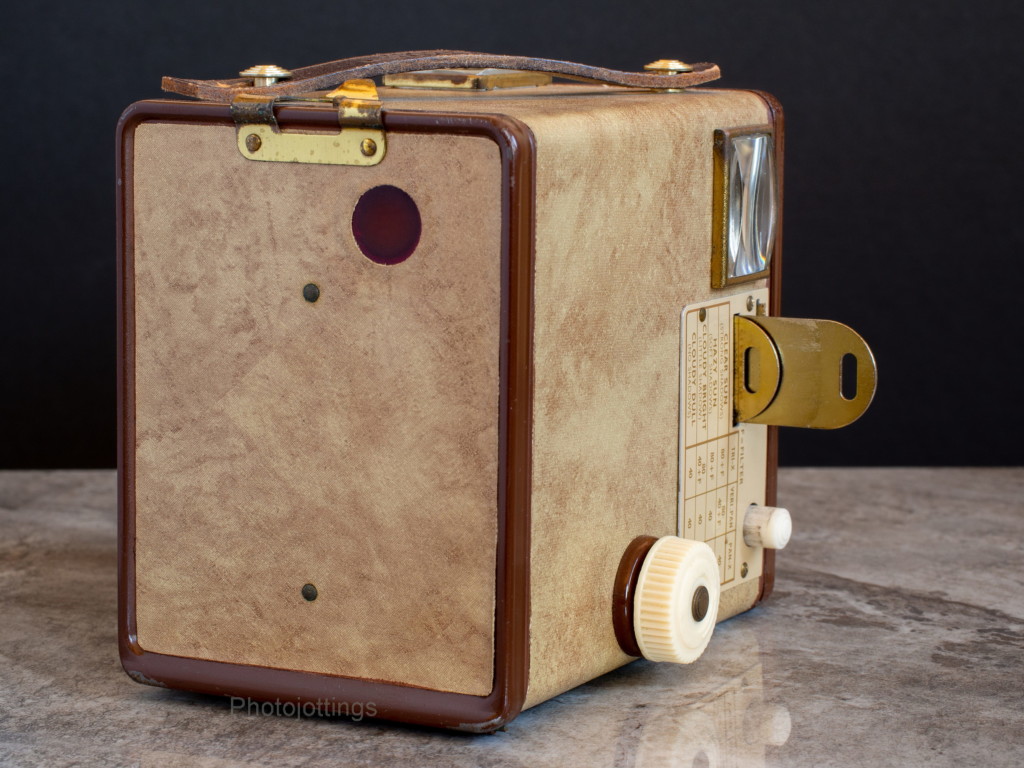 Here the yellow filter is pulled out into position; but don’t use this with color film.  The close-up lens is at the back, and has written on it: ‘out 5 to 10 feet,’ and ‘in over 10 feet.’

The back of the camera is hinged at the bottom, and has a clasp type latch at the top; just below the clasp is a red window for correctly advancing your film. 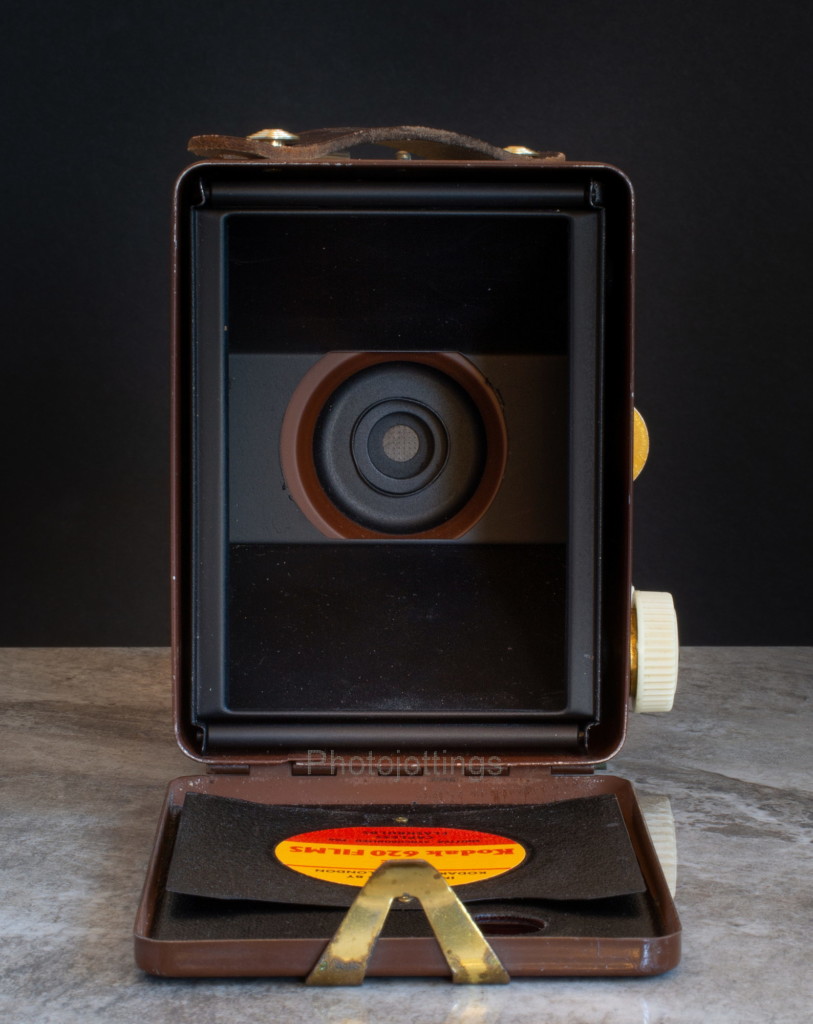 With the back open we can see inside the film chamber, and all the way to the back of the aperture and shutter disk.  Notice the spring steel pressure plate attached to the door, and the film roller guides on both sides of the film chamber, nice additions for a box camera. 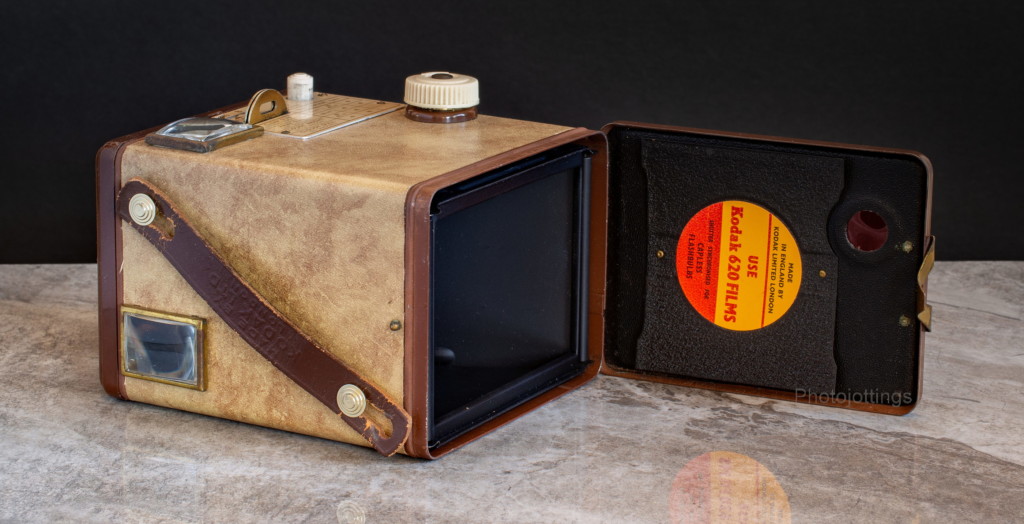 The top view shows us the leather embossed carrying strap and the vertical viewfinder.  Make sure you use Kodak 620 films, and capless flashbulbs! 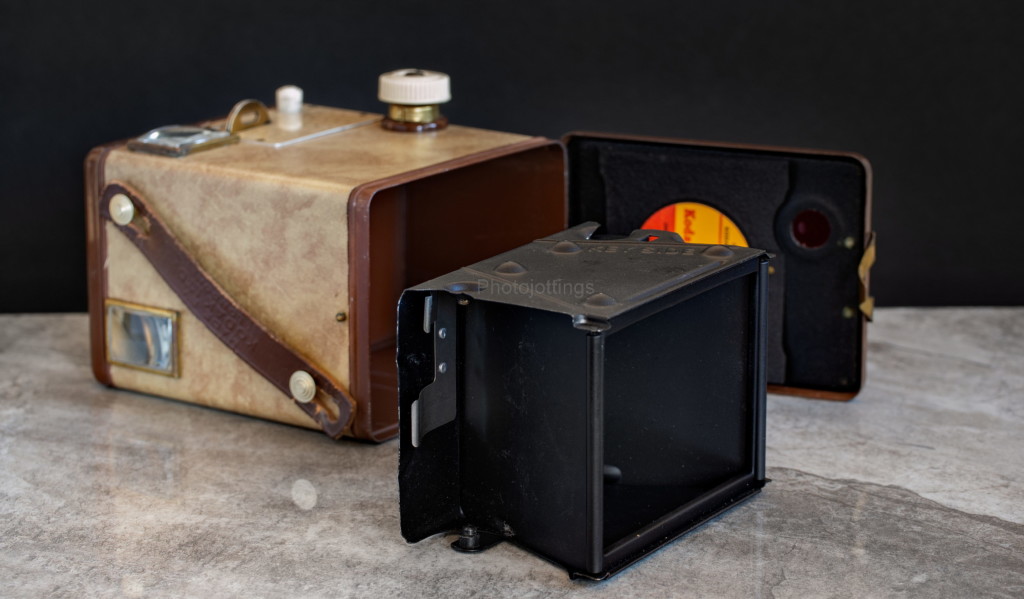 You take out the film holder by pulling up on the winding knob as seen here; then you can slide out the entire assembly.  The supply spool goes in opposite the winder knob.

That’s about it for our walk-around of the Kodak Brownie Flash B camera.  The front sorta looks like a pig’s face no?

Here are some samples taken with Kodak Tmax 100. The pictures are 3000 pixels on the long side, so click for a larger version.  Scanned on a Nikon Super Coolscan 9000 ED. 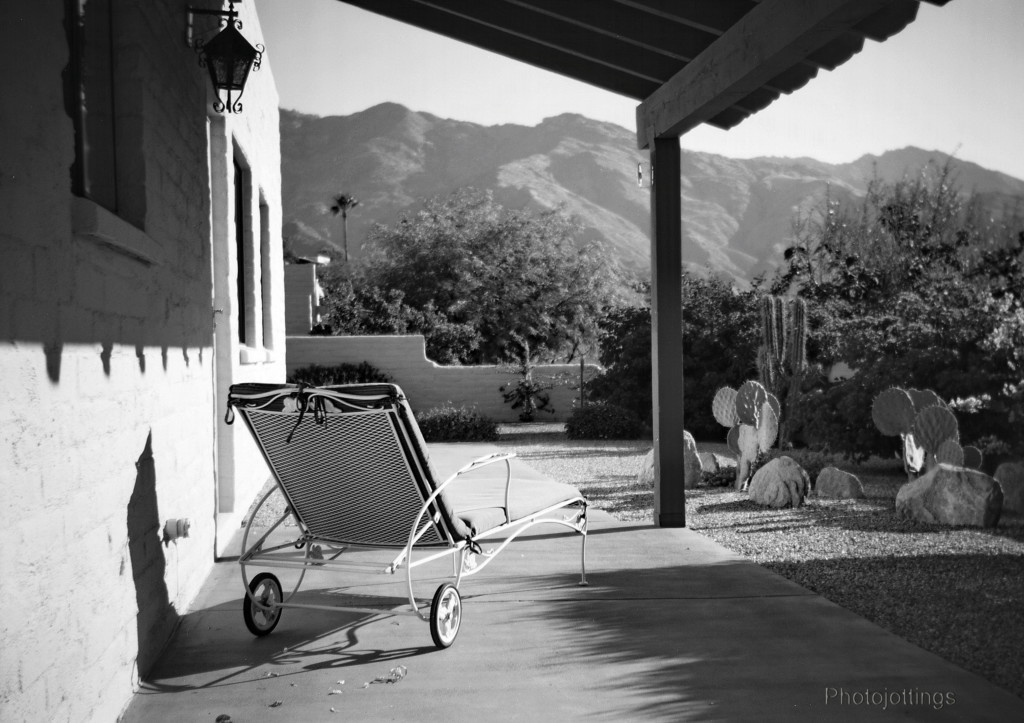 Patio and mountains.  The background is a little blurry due to the slim depth of field at F/11.  Kodak should’ve went with an F/16 aperture or a focusing lens in place of the not very useful two speed shutter. 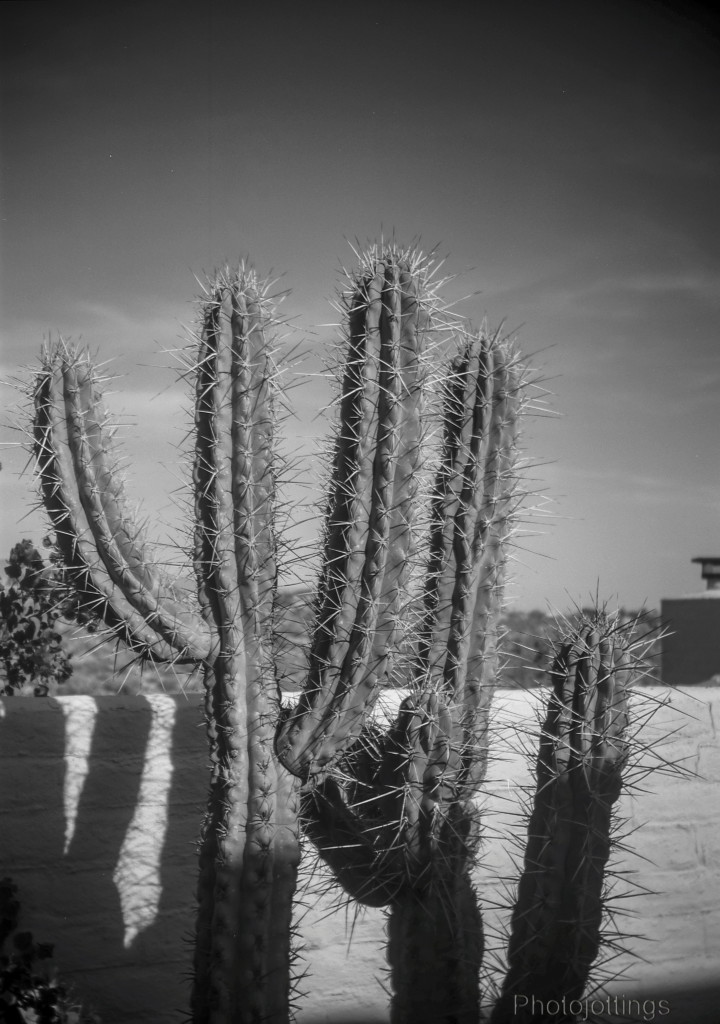 Here I used the close-up lens; you can see it darkens the corners of the image, but it does a good job in the whole central area, the cactus is quite sharp, probably taken around 6′ (2m) away.

Well, the Kodak Brownie Flash B turned in a good review, but certainly not great.  I do like the built in close-up lens, it makes objects that are around portrait distance away seem much sharper than when using just the main lens, and you actually get some good background blur too as you can see in the photo above.  The yellow cloud filter doesn’t seem to make much difference with cloud separation in the sky when using B&W film, so it’s really a waste, and don’t use it if you’re shooting color film, otherwise your pictures are ruined; or maybe you’ll like the really, really warm look.

There are a couple of pluses for the camera; the viewfinders are quite bright, which makes it easy to frame your shots in good light, just remember the image is reversed, and you’ll notice that right away when you look through it.  Additionally, the camera is quite small and lightweight, so you could put this in a small waistpack or a purse and not really notice it much.

Unfortunately, the camera isn’t very useful for landscape type shooting due to the 100mm focal length, and F/11 aperture, which results in a somewhat shallow depth of field that will not allow long distances to come into sharp focus; it could’ve used an aperture selector disk, and focusing front element setup like on the Argus super seventy five.

In the end, I simply like the camera for the looks, just like this one, so the ole gal will probably stay on the shelf for the rest of her days, unless miraculously I get a burst of creative energy and decide to take her out for another spin.  Until then…