Behind the scenes of the 1958 Western; Buchanan Rides Alone - Photo Jottings 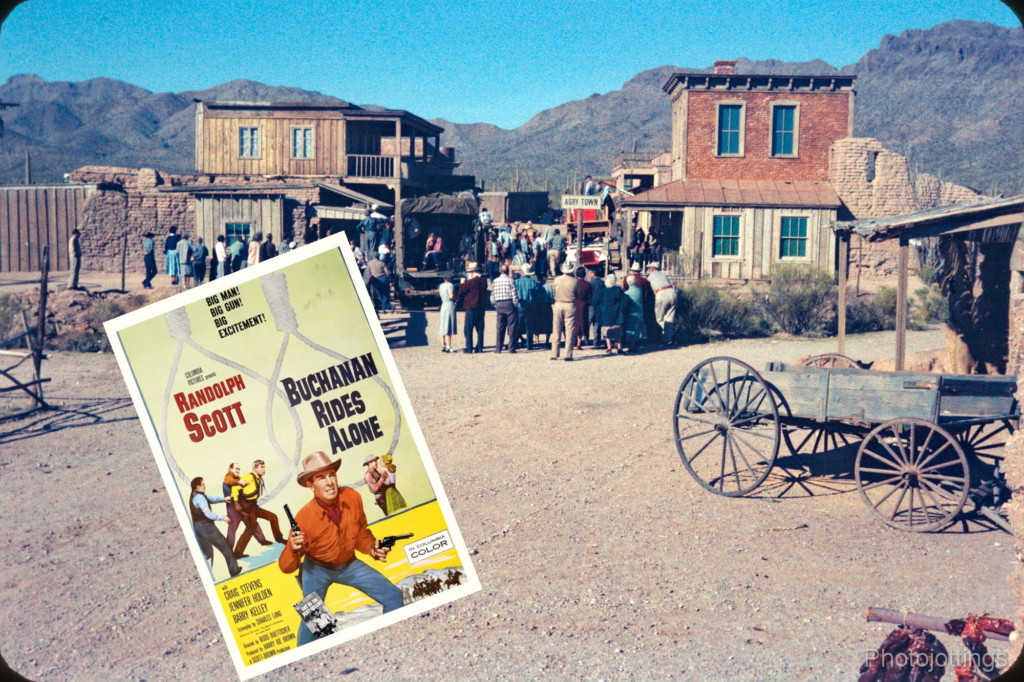 Columbia Pictures presents; Randolph Scott in ‘Buchanan Rides Alone.’  Big Man!  Big gun!  Big Excitement!  Grab a bag of popcorn and  Watch it now!  Today we go behind the scenes of the 1958 Western, Buchanan Rides Alone, starring Randolph Scott.  Much of the movie was filmed in Old Tucson, which is a famous movie location just west of Tucson, Arizona.

Anyhow, My Dad took his Aires 35-IIIL along for a random studio/location tour, and it just so happens that some of the scenes for the movie were being filmed that day.  By looking at the pictures and shadow angles, it appears the morning was cloudy, and it cleared up in the afternoon. 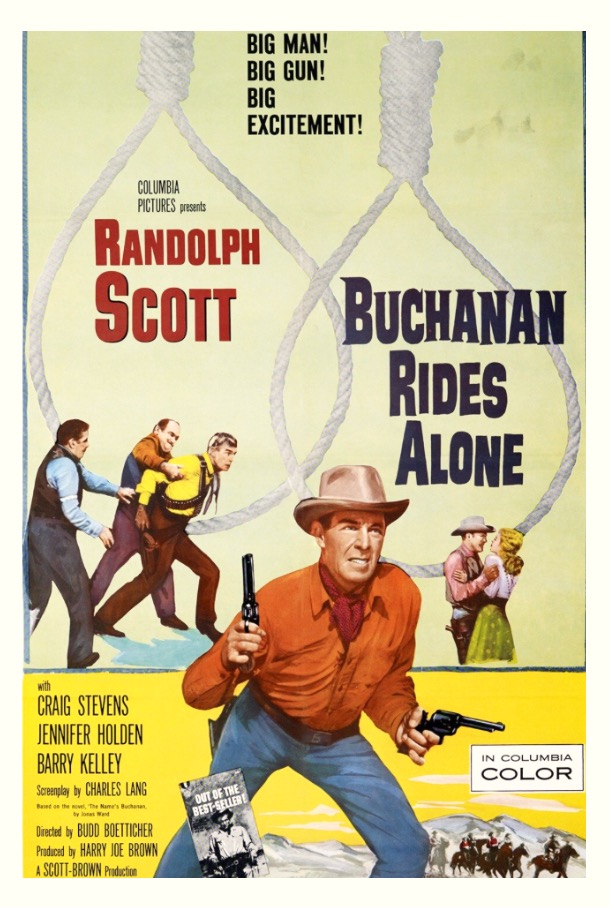 The Movie Poster lists Craig Stevens, Barry Kelley and Jennifer Holden as supporting actors, but after the cutting room, Jennifer Holden had about 1 minute of airtime, if that much, so it looks like she was the ‘hook’ for the younger male crowd; they even made it appear she had a love scene by the graphic on the right side of the poster, but that never happened.

Randolph Scott was a big star back in the day, and called Fred Astaire and the reverend Billy Graham friends, along with Cary Grant, in which he shared a Malibu beach house with, calling it ‘Bachelor Hall.’  Scott also had a brief marriage to Heiress Marion DuPont, of DuPont de Nemours, Inc.

The somewhat faded images below were taken on Kodak Ektachrome in February 1958, and the movie was released in August of that year, so a quick production turn around back then. 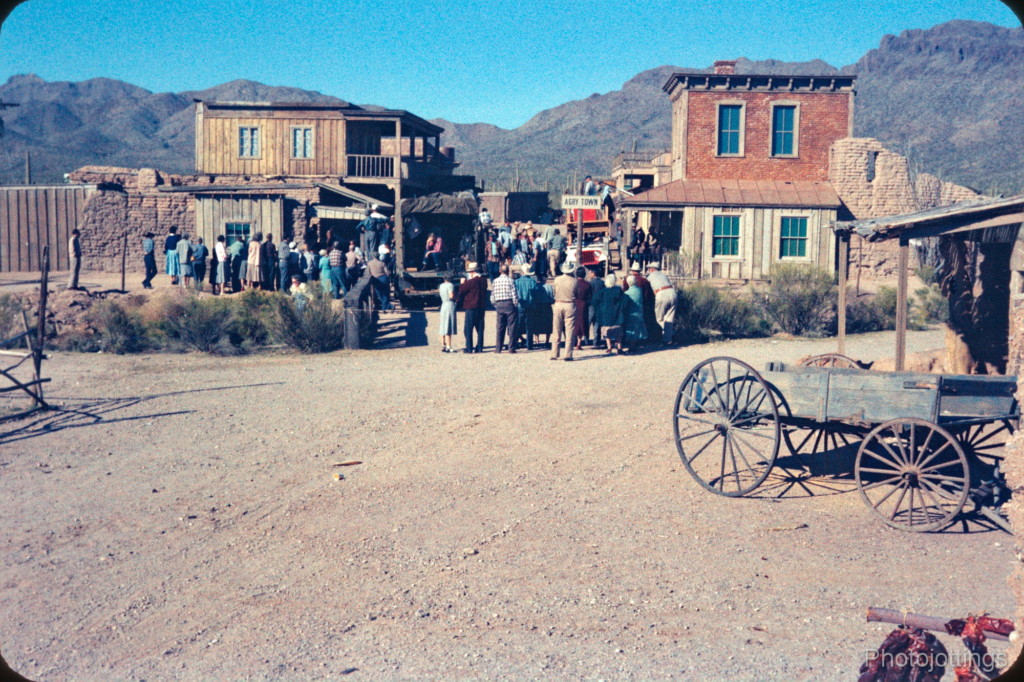 This is the entrance to ‘Agry Town’ where Buchanan rides in at the very beginning of the movie, and at the end where the bag of money is laying in the middle of the bridge.  Judge Simon Agry gets shot by his brother Lew here too.  The Sheriff’s office is the brick building to the right. 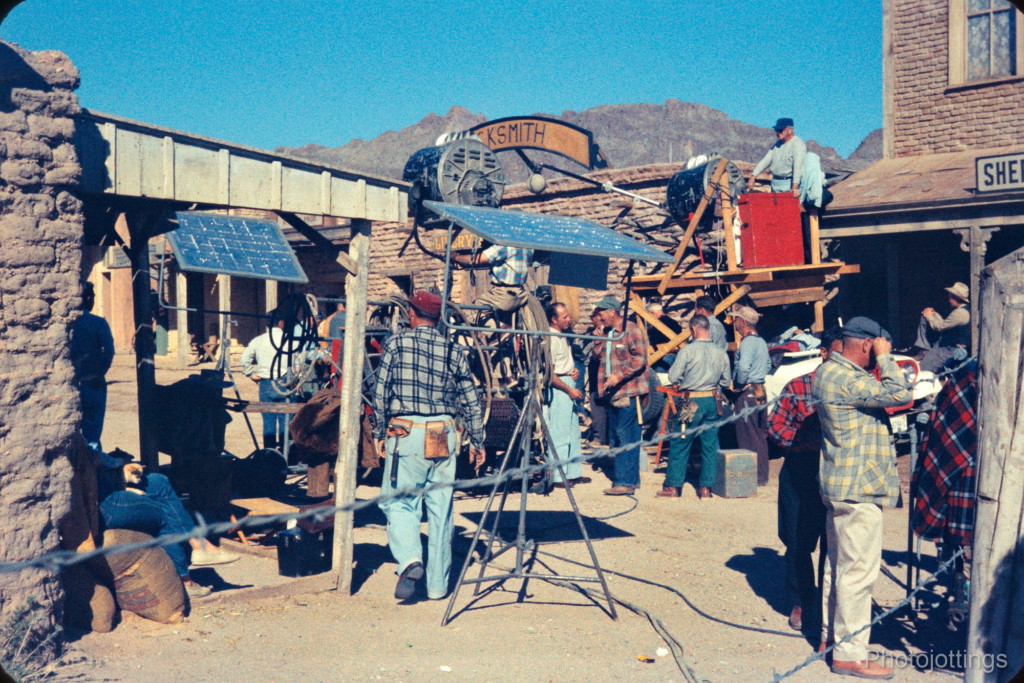 This picture was taken by the left side of the building that you see in the broader view above. 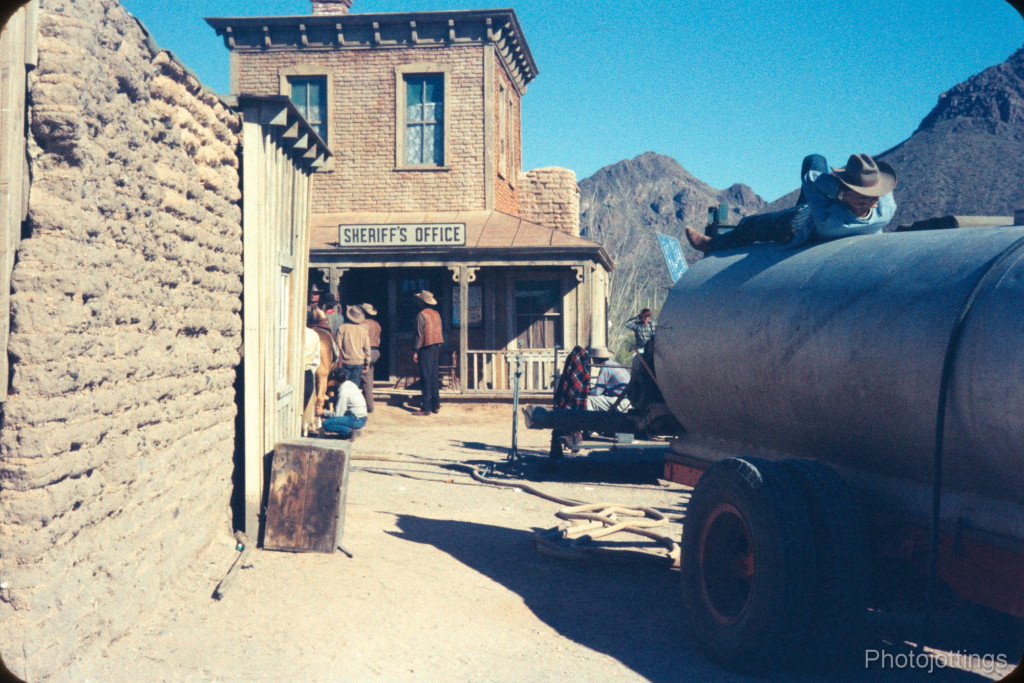 Panned to the right and a few steps back, from the image above.  It looks like they’re shooting a mob scene at the Sheriff’s office. 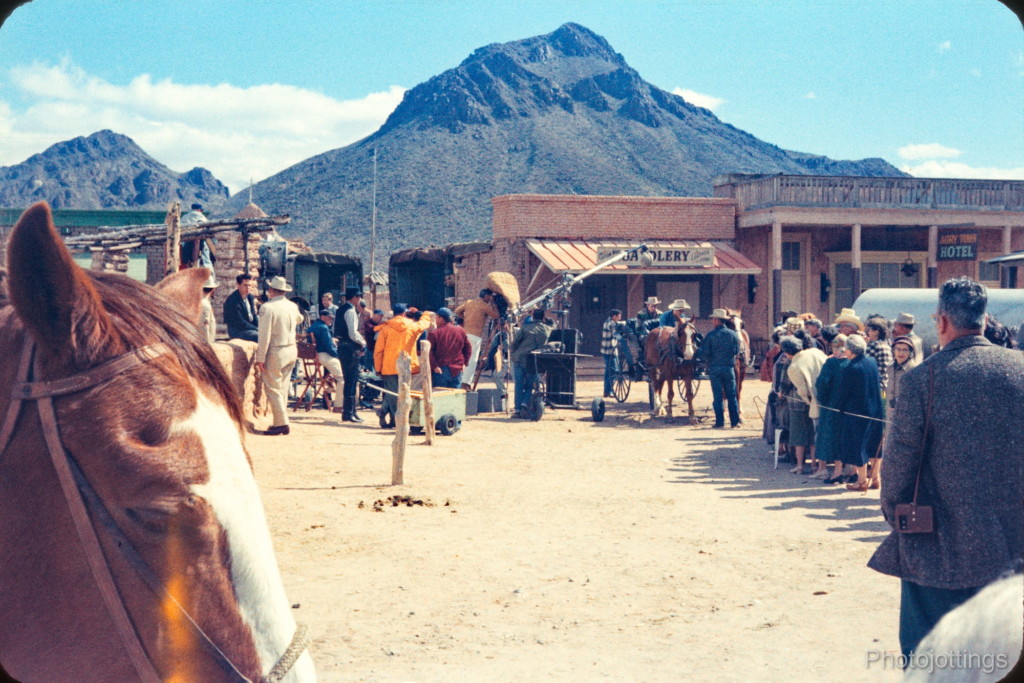 A couple of actors can be seen here, Carbo, (Craig Stevens), has the black vest and hat left of center, and the town cryer is just over his shoulder, with the blue shirt.  Notice the ‘Agry Town Hotel’ sign on the right, above the guy’s head. 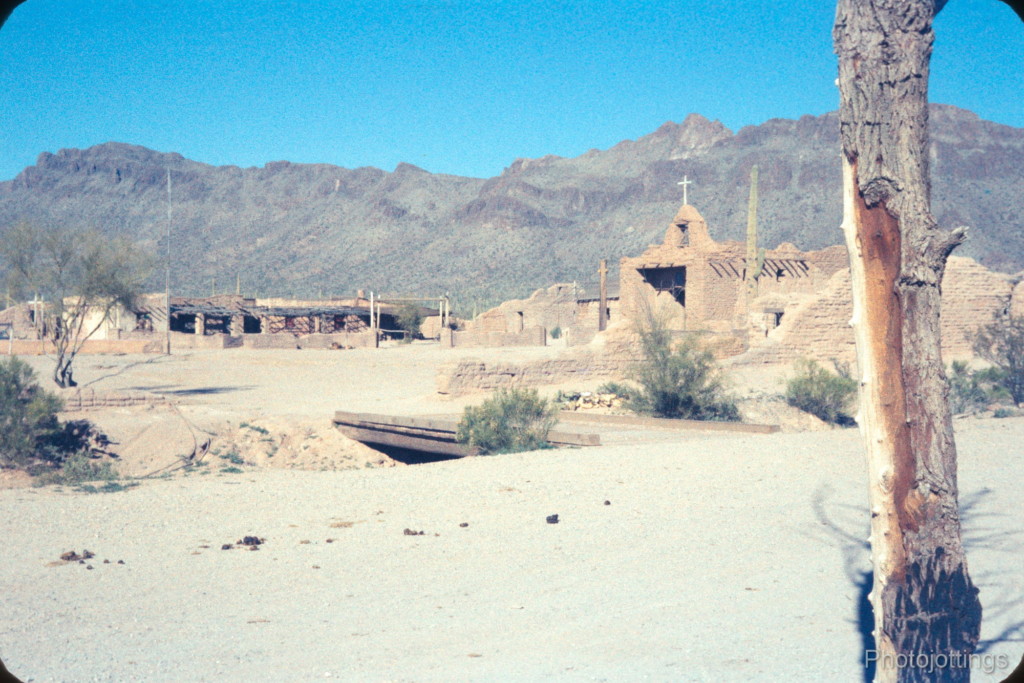 This is the part of town where Buchanan and Juan almost get hanged; see the log over the walled entry, to the left of the church.  The bushy tree on the left background is where they tied up the horse and buggy a couple of times. 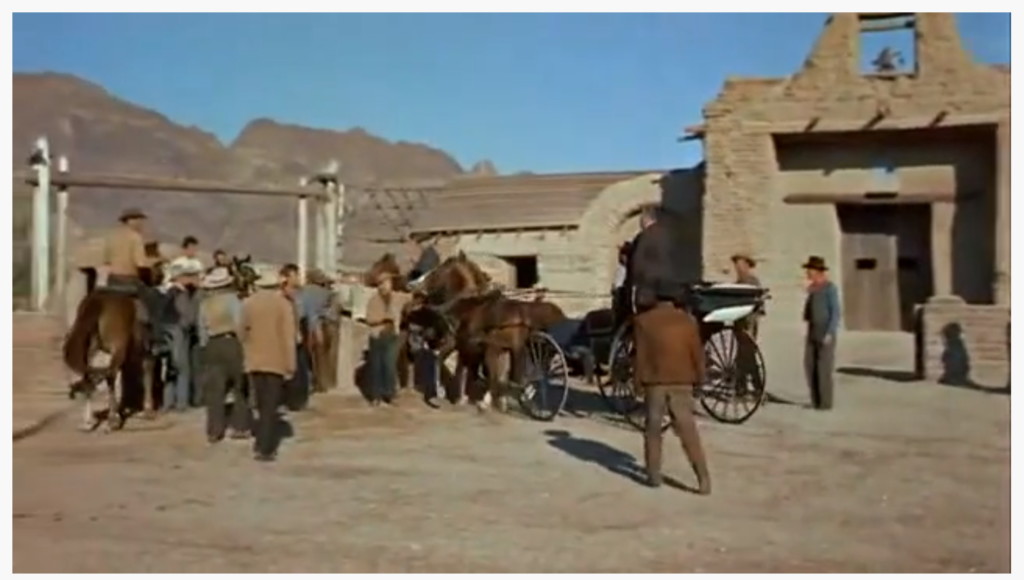 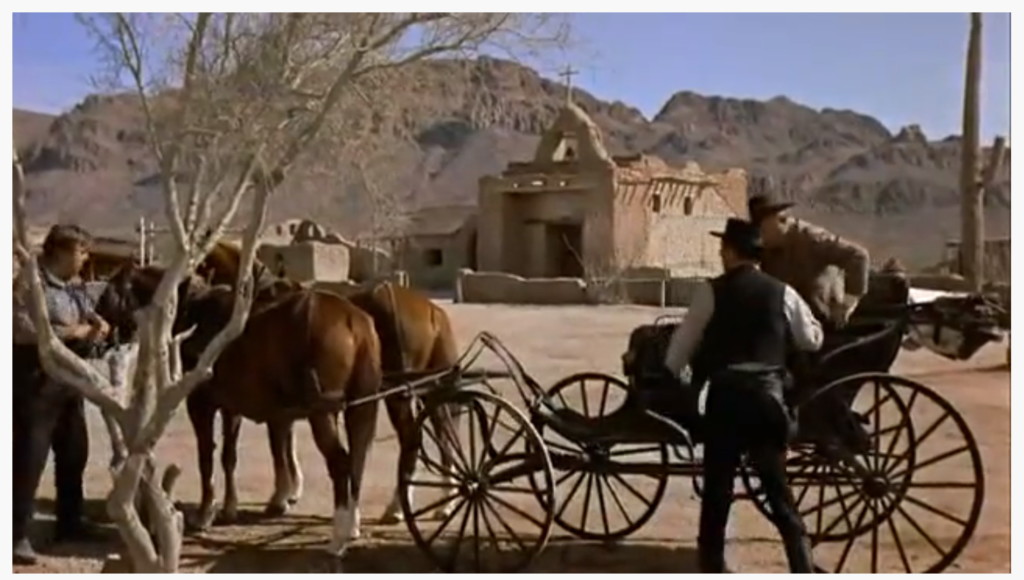 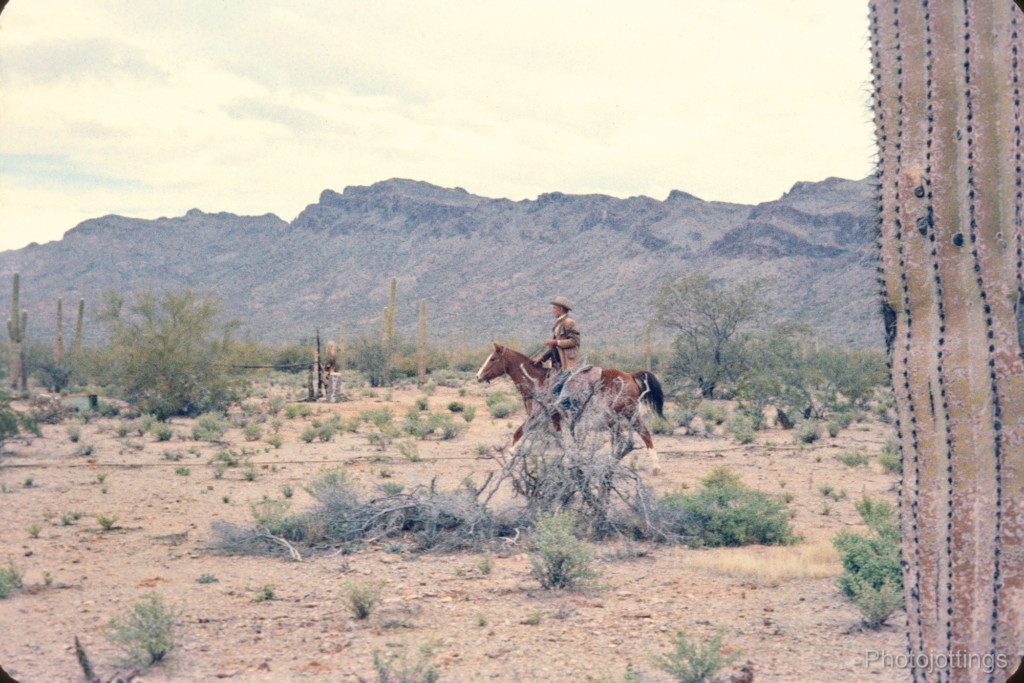 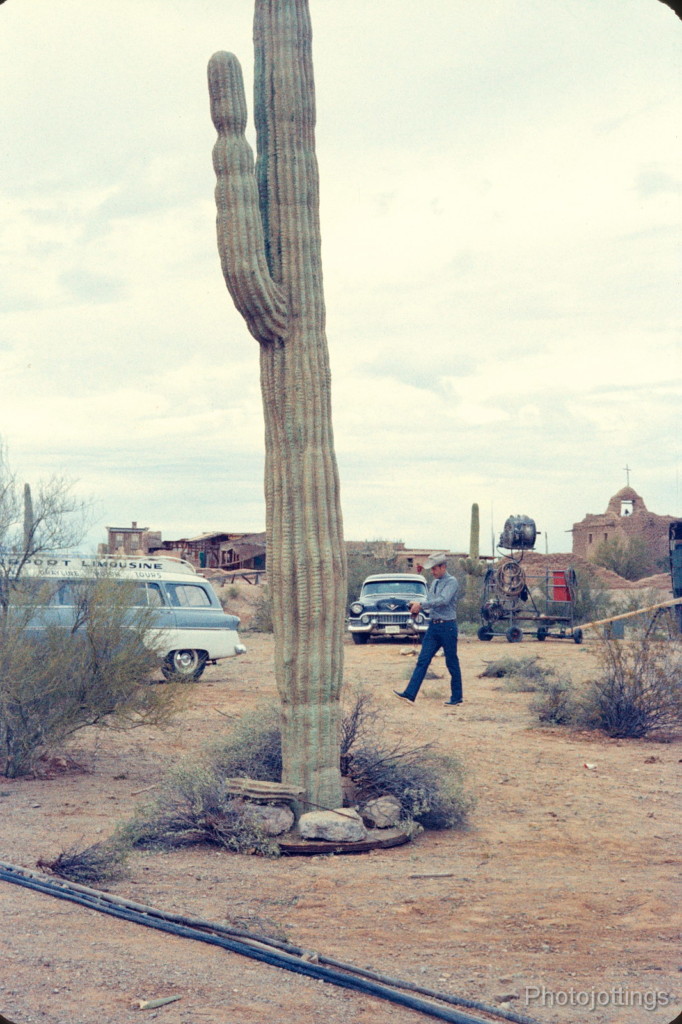 A fake Saguaro Cactus that shows up in several scenes.  Cowboy unknown. 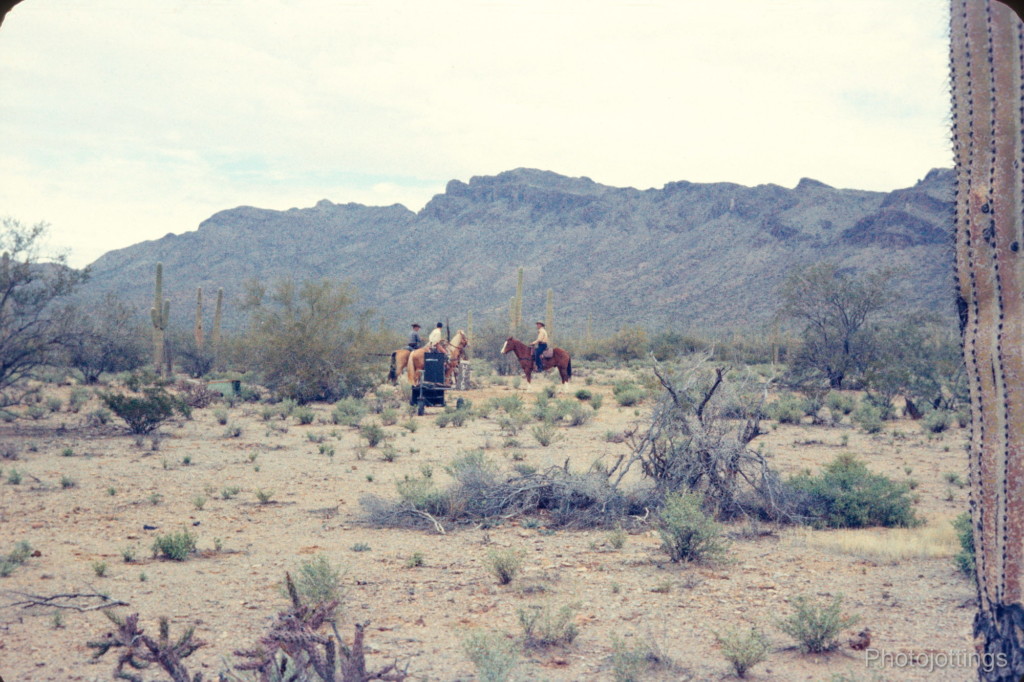 This is the scene at about 55 minutes in, where Juan, Pecos and Buchanan are headed to Mexico to intercept the ransom money; it’s depicted in the movie as night time by using a darkening filter over the lens. 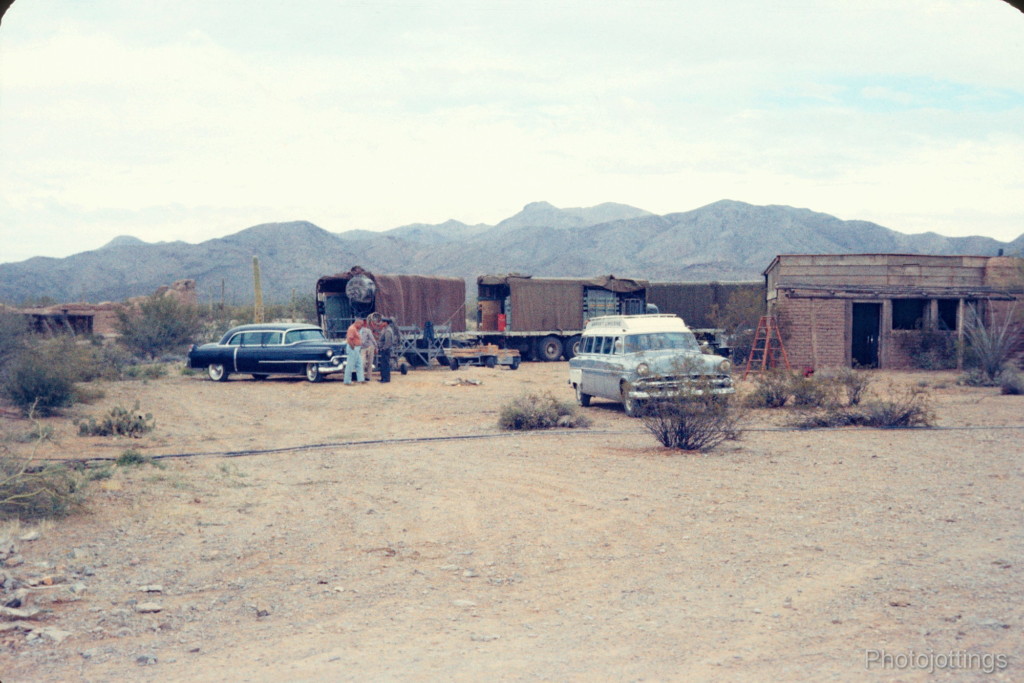 Probably Buchanan’s black Cadillac Limo parked near the shooting that takes place this day.  The adobe hut on the right is the ‘old shack’ they used for hiding out at the 48 minute mark. 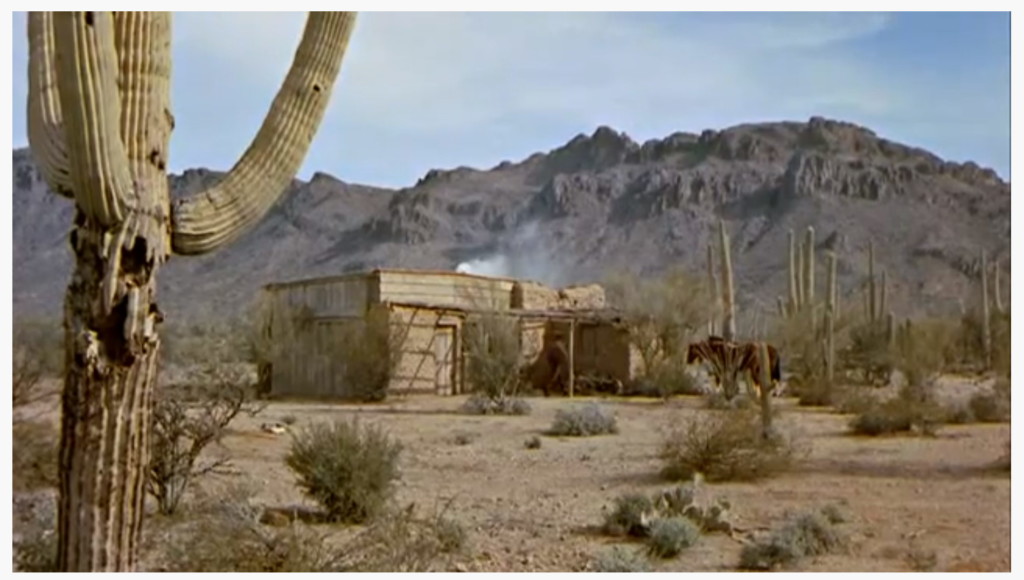 The ‘old shack’ as it appeared in the movie. 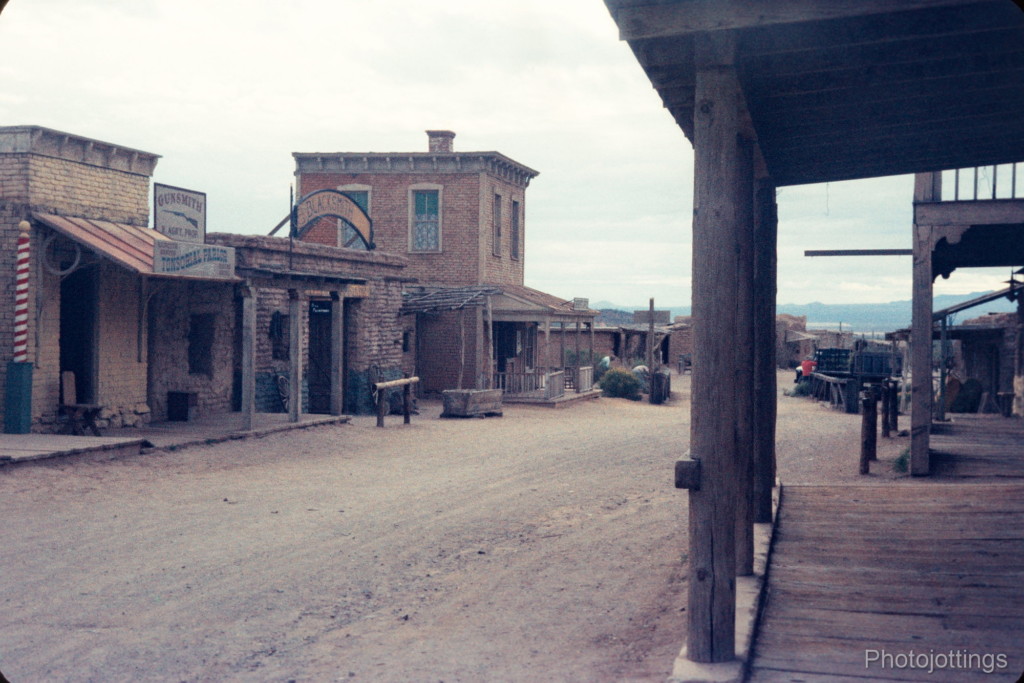 This is looking down mainstreet towards the bridge in the opening scene with Buchanan riding into town.  A cloudy morning it appears. 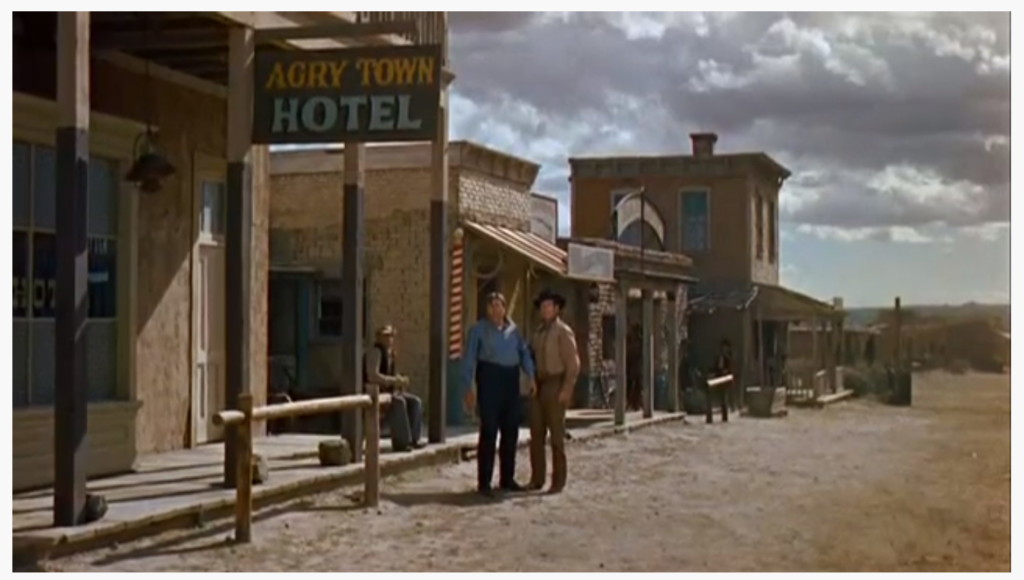 How it appeared in the movie, obviously the sun made an appearance for this scene.

Well, that’s all folks, hope you enjoyed the ‘behind the scenes’ from Buchanan Rides Alone.  It’s actually a good movie, see it here.