Today we step back to the early 1960s for a close look the Kodak Motormatic 35F, one of the last USA made 35mm Kodak Cameras.  The Motormatic 35F has a somewhat unique feature that allows you to take over one frame per second by simply winding up a spring drive mechanism and pressing the shutter button as fast as you can; it actually works quite well and apparently was the forerunner of the modern day spray and pray ‘continuous’ drive mode.  Additionally, the ‘F’ in the name means it has provisions for flash use; in this case you can use ‘peanut’ size AG1 bulbs or even an electronic flash with the PC socket.

The Kodak Motormatic 35F has some nice features that include the previously mentioned spring driven power drive mechanism, Selenium light meter, four shutter speeds to choose from, a pop-up flash and PC socket, a coated four element ‘Tessar’ type lens, and a whopping twenty ASA settings to choose from!!

Although the 35F has some neat features, it isn’t a high spec camera.  Contrary to the look of the windows along the top, it isn’t a rangefinder, you have to guess the distance for focusing and cross your fingers.  Also, the camera build quality is definitely in the mid-range area at best, which includes a mostly plastic main body; a slow, (even for the times) F/2.8 primes lens with cheap shutter, and a glued-to-foam pressure plate (that often comes unglued); however, the camera does feel nice in the hand.

My fully functional copy came to me via eBay for about the same price as a meal for four at McDonald’s, so things are off to a good start, and be sure and check out the sample images below.

Mike Eckman has an excellent write up of the history and iterations of the Kodak ’35’ series if you’re interested.  Jim Grey reviews the non-motorized version with sample pictures.

Let’s take a look at the Kodak Motormatic 35F specs.

Distortion; looks mild from the pictures I have with straight lines near the edges.

Flash.  Pop up type for ‘peanut’ AG1 bulbs.  Has a PC socket for electronic flash.

Power; no battery power required for exposures, but needs two ‘N’ type for the flash to fire.

Viewfinder; small, with decent brightness and a definite blue bias.  Guidelines with parallax marks at 4 feet.  Focusing symbols on right side, see focusing above.

Crippling features and omissions; no way to control aperture other than putting your finger over the sensor lens.  No cable release socket. No bulb mode, or any other way for long exposures.

Good features; wind up and start shooting!  Very simple to operate, all automatic controls and will take inexpensive flash bulbs.

The colorful, almost ‘groovy’ box, and camera. This is outfit No. 72 and comes with the camera, strap, owner’s manual and flash cards. 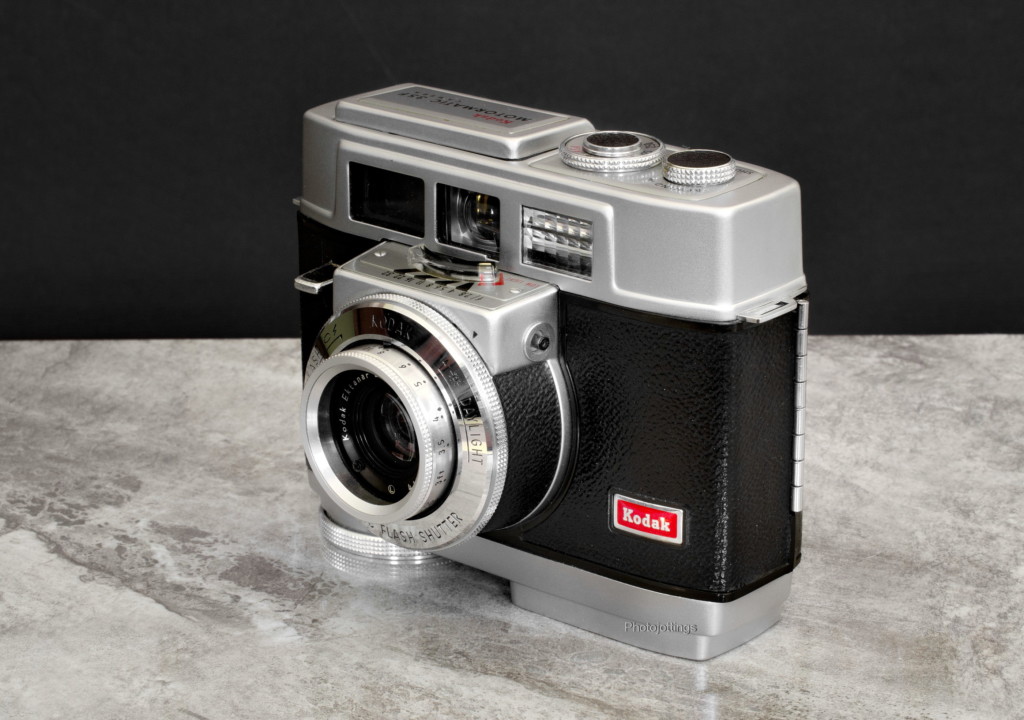 The Kodak Motormatic 35F is a handsome camera, and my copy almost looks like new! 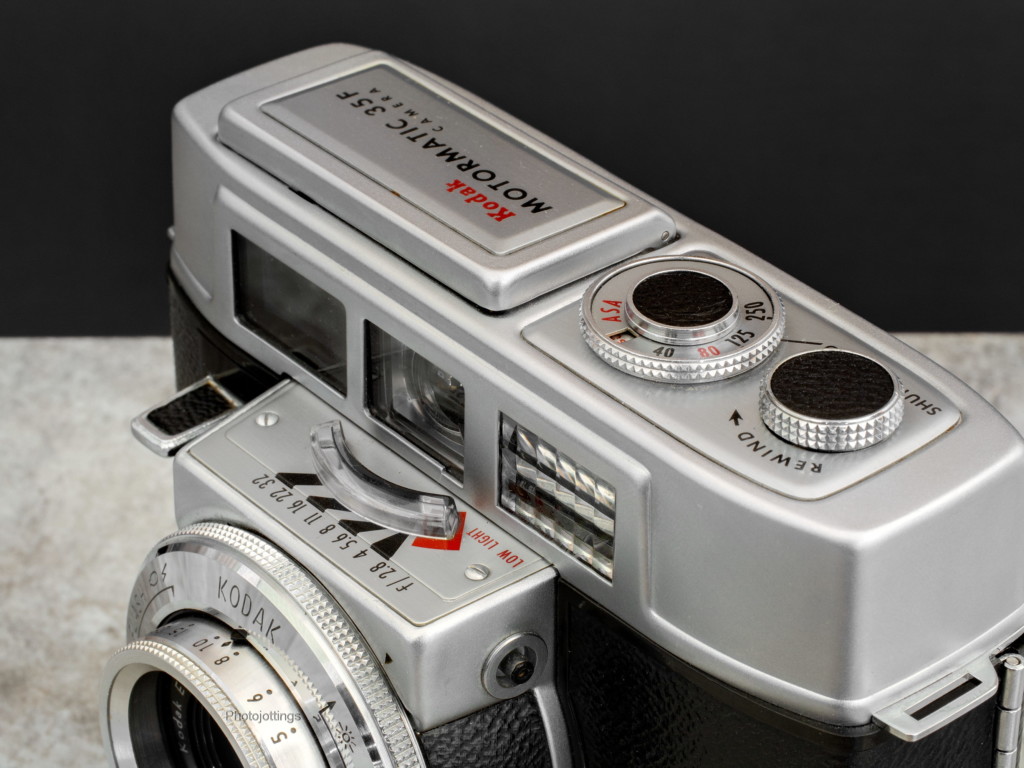 There are several features on the camera that will help with taking better pictures.  From the bottom we have a distance scale around the lens rim, going from 3 feet to infinity; it’s ‘zone’ or guesstimate focusing only, this isn’t a rangefinder camera although it does look like one.

There’s a PC socket for electronic (or bulb) flash by the side of the lens; it’s the nipple on the aperture panel housing.

The aperture scale and needle under the clear plastic cover are for information only, you can’t adjust the aperture, but it will warn you of low light and recommend flash use when it’s in the red area.

Along the top plate we have the pop-up flash holder, shutter speed and ASA setting ring, and the rewind knob. 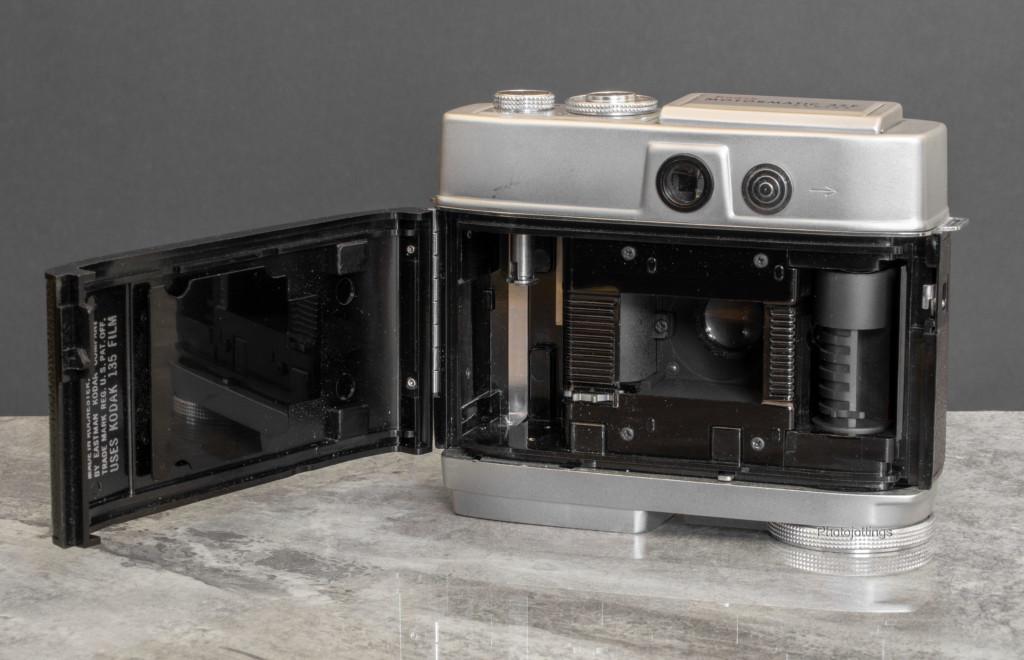 The back opens from left to right by using a small sliding button just visible on the right side of the camera.  Notice the large film take-up drum with sprocket fingers; it’s plastic so be careful!  The film gate is metal, as well as the pressure plate and shutter cocking sprocket.   The round button next to the viewfinder is for popping up the flash reflector. 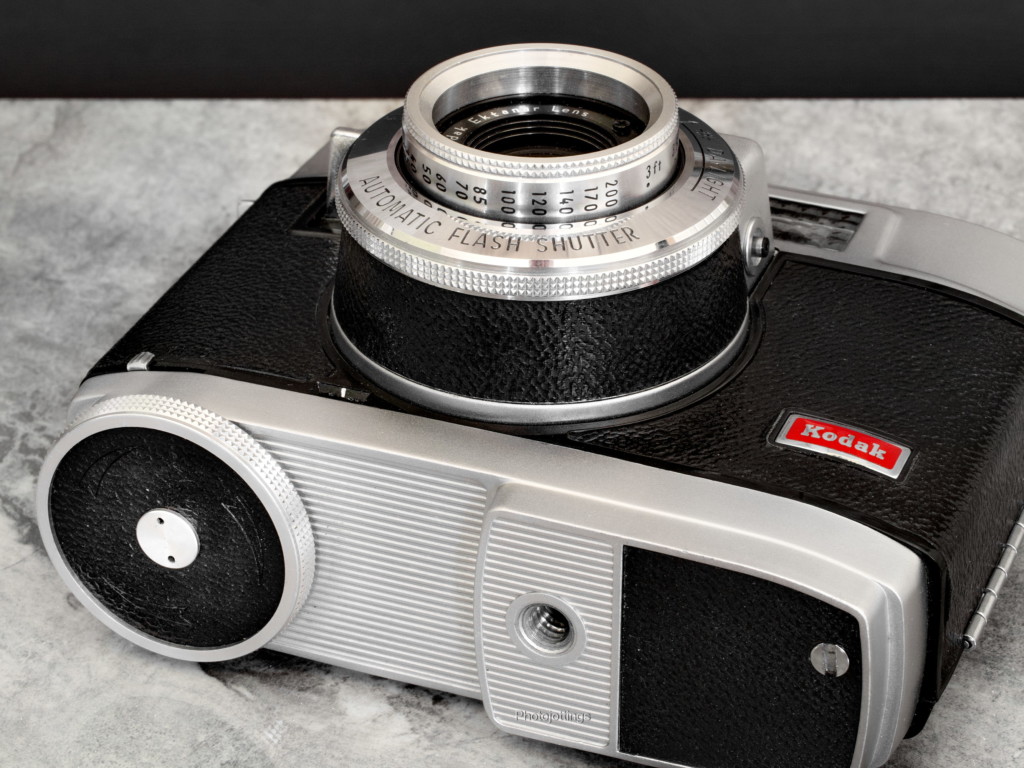 Kodak put a tripod socket on the bottom, but it’s not very useful without a bulb mode or cable release.  The large knob on the left is for winding the film advance mechanism; it takes a lot of winding to rattle off 10 shots or more, and follow the pointing arrows for winding in the correct direction.  On the right is a screw for accessing the battery compartment, which takes two ‘N’ type batteries.

The guide numbers under the lens are for flash use.  It seems silly to put so many distances that are actually quite close to one another for determining proper flash use, and oddly, there are no guide number recommendations for 200 on the Kodak flash card. 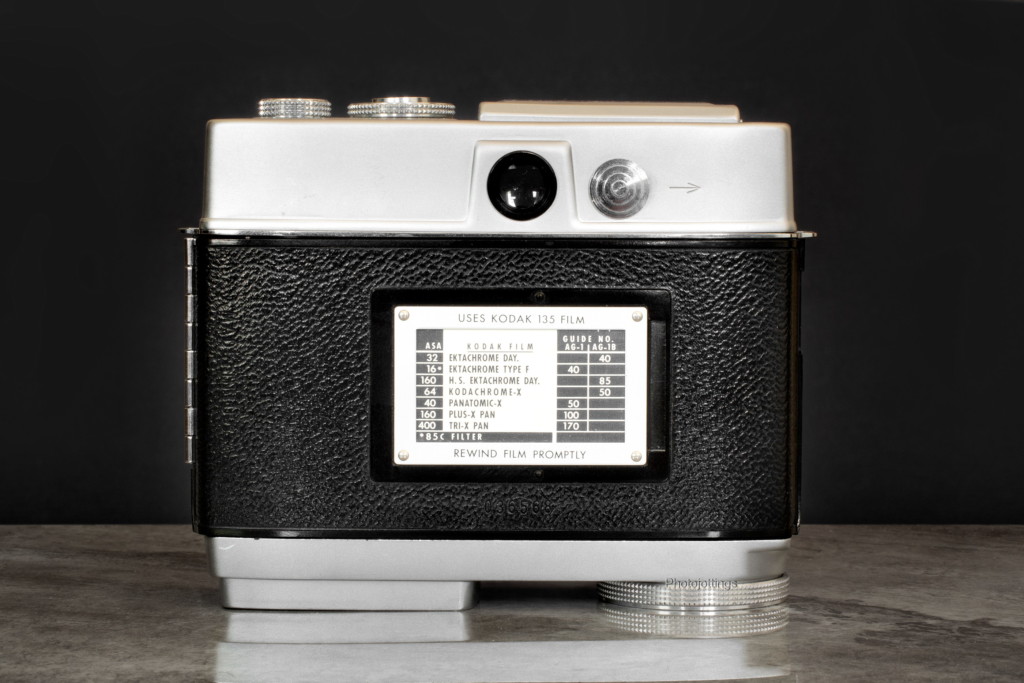 The back cover has a slot to hold the exposure card, it recommends the ASA and flash guide number for the type of Kodak film you’re using. 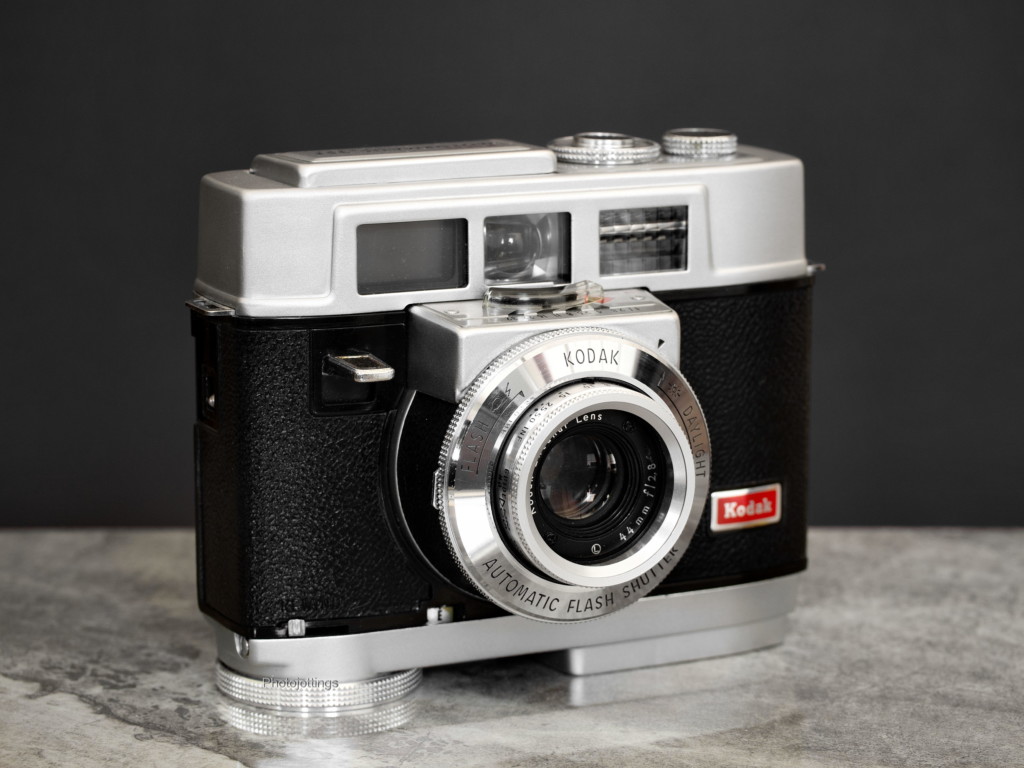 Another view of our handsome camera.  The shutter button is on the front right side, or left in the picture.  The small sliding lever on the bottom left in picture is for rewinding the film, and if you look closely at the larger image (click) you’ll see the word ‘REWIND’ embossed into the faux leatherette covering just above the lever.  The little window alongside the rewind lever is the film shot counter; here it’s at ‘E’ for empty. 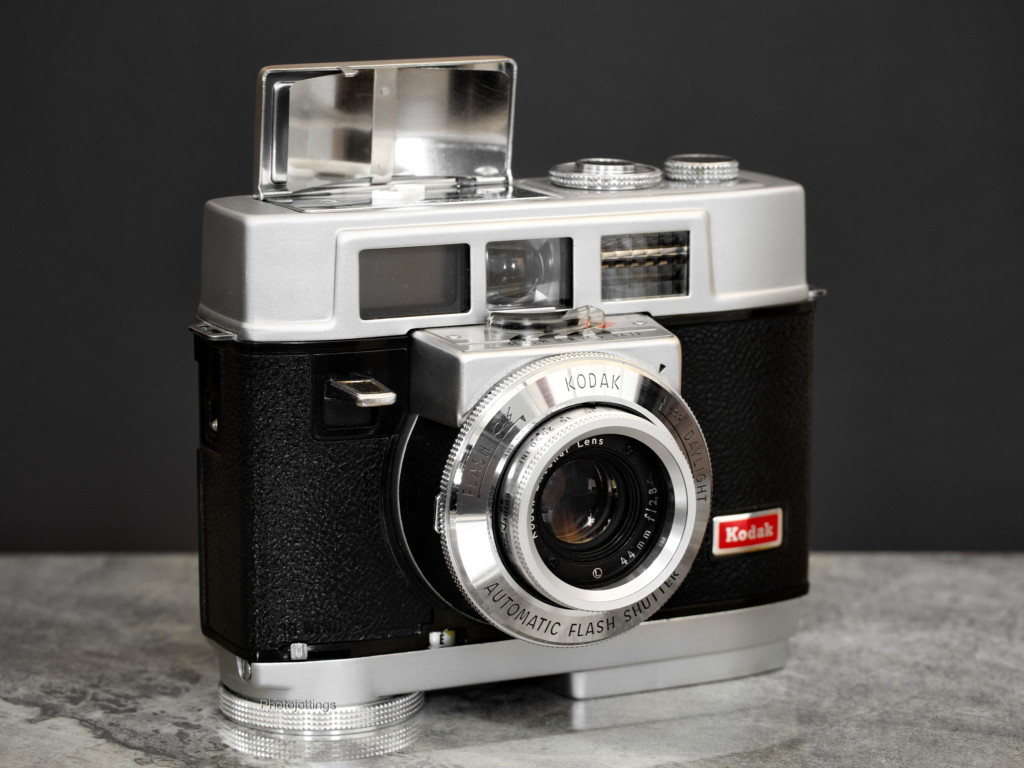 Here the flash reflector has been popped up.  It takes a small ‘peanut’ size bulb, and you can carry a dozen in your pocket without noticing them, but  be careful for any static electricity that may unintentionally set off the bulbs, and set fire to your britches. 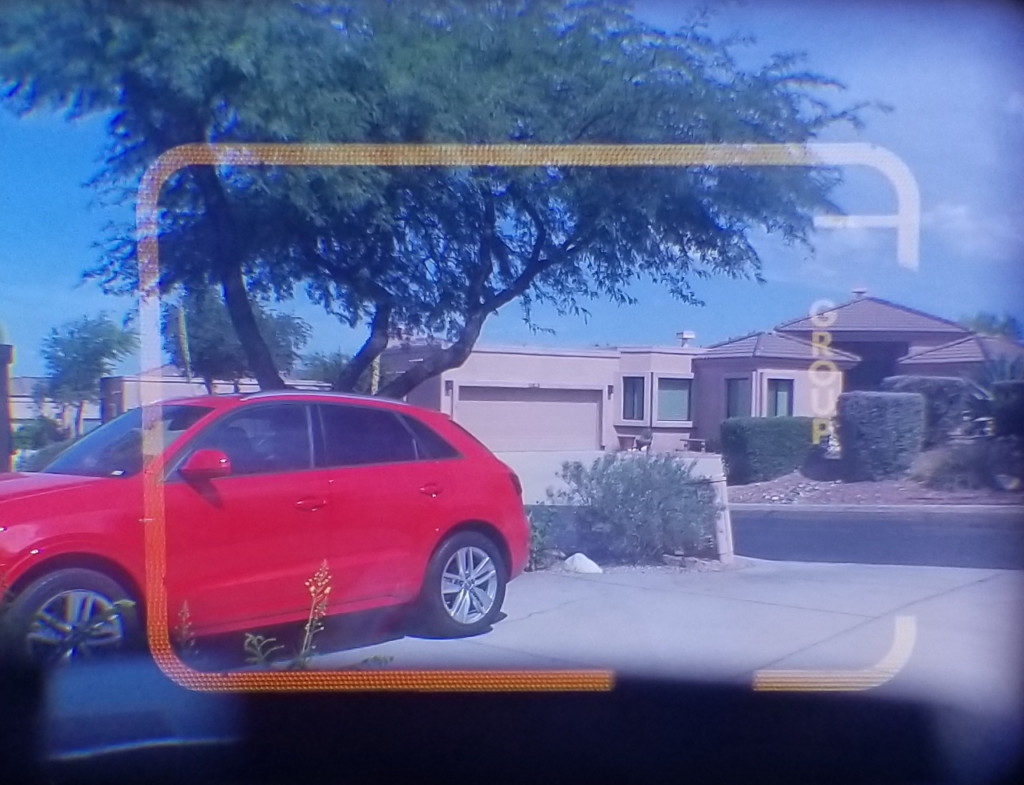 This is what it’s like looking through the viewfinder.  It’s noticeably biased to the blue end, but the guidelines and focusing symbols are easy to see.  Black patch along the bottom is the curved aperture needle housing on top of the lens.

Here are some test images scanned on a Pacific Image PrimeFilm XA SE scanner.  All are 3000 pixels wide; there is no additional resolution from scanning at a higher sample rate.  Kodak Gold 200 used for all shots.  Click for larger images. 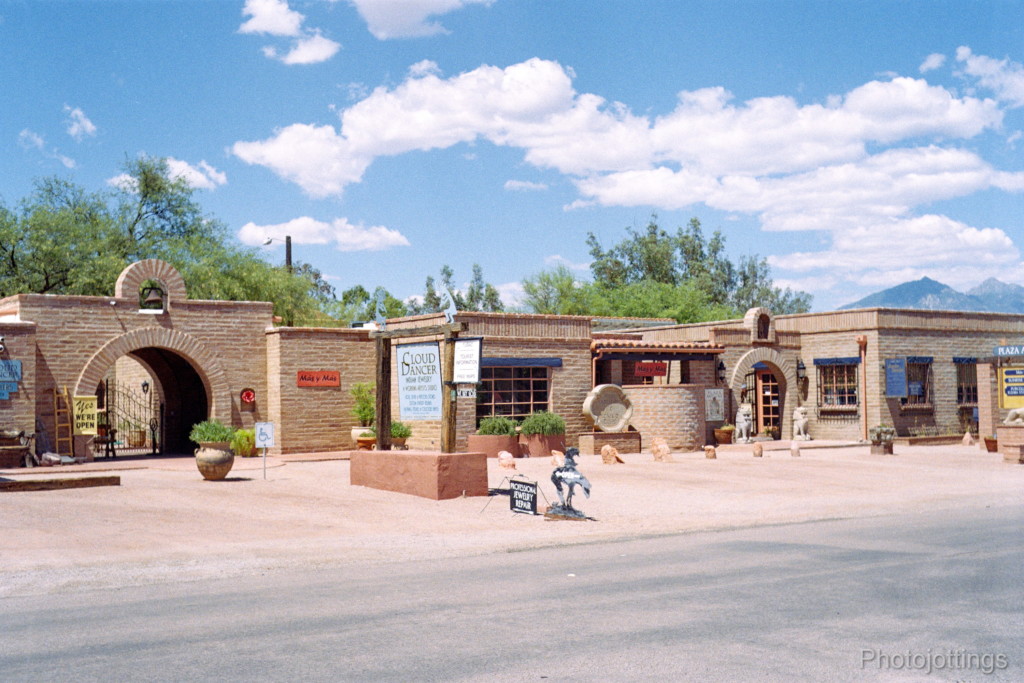 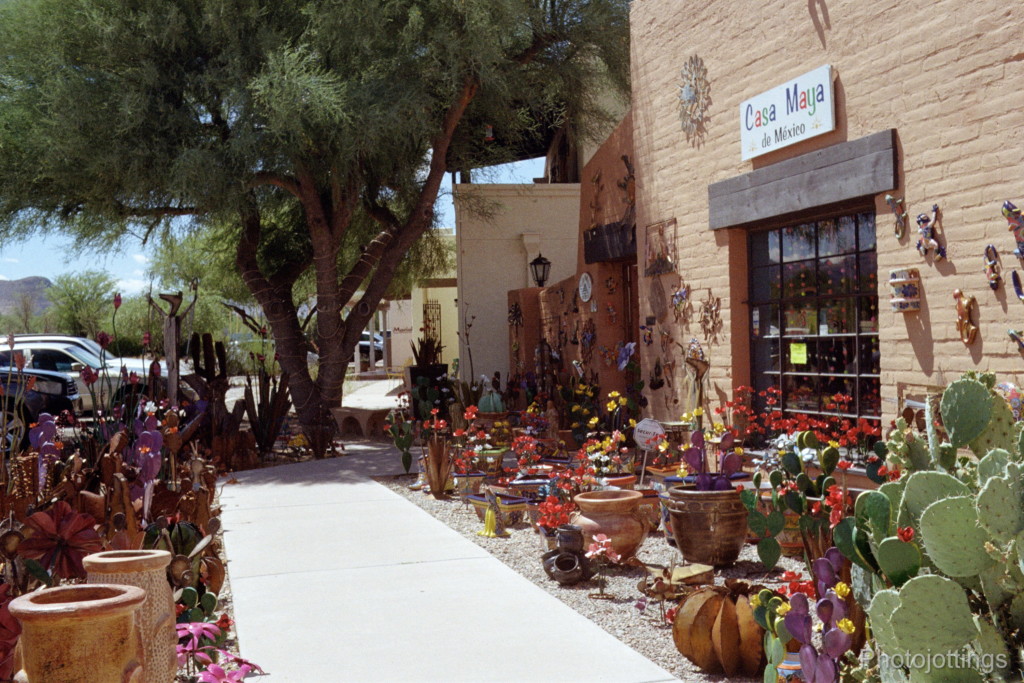 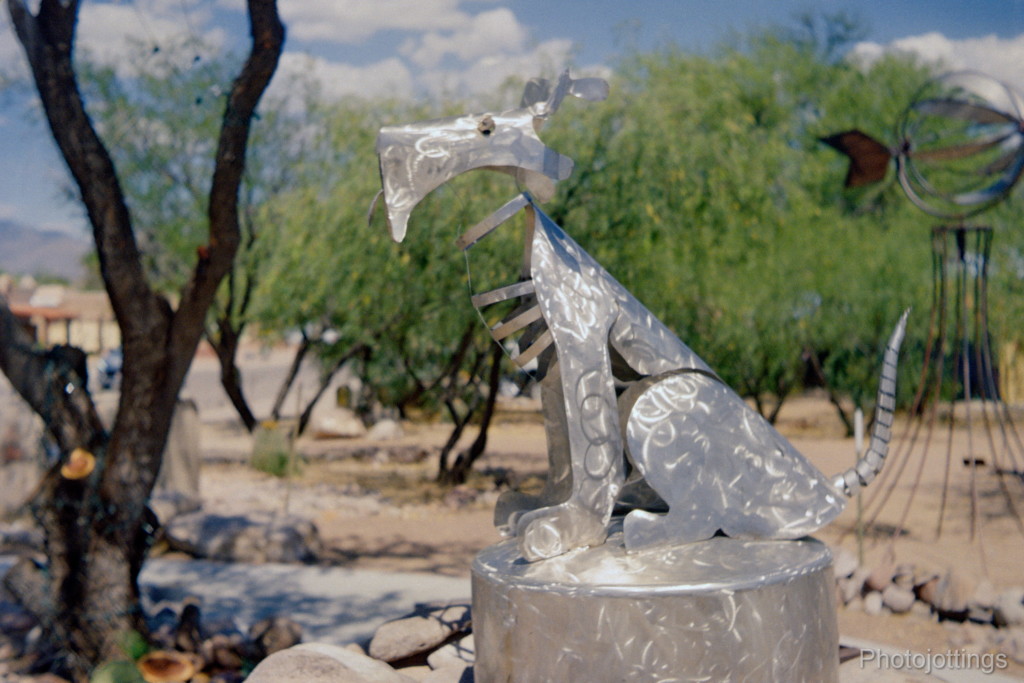 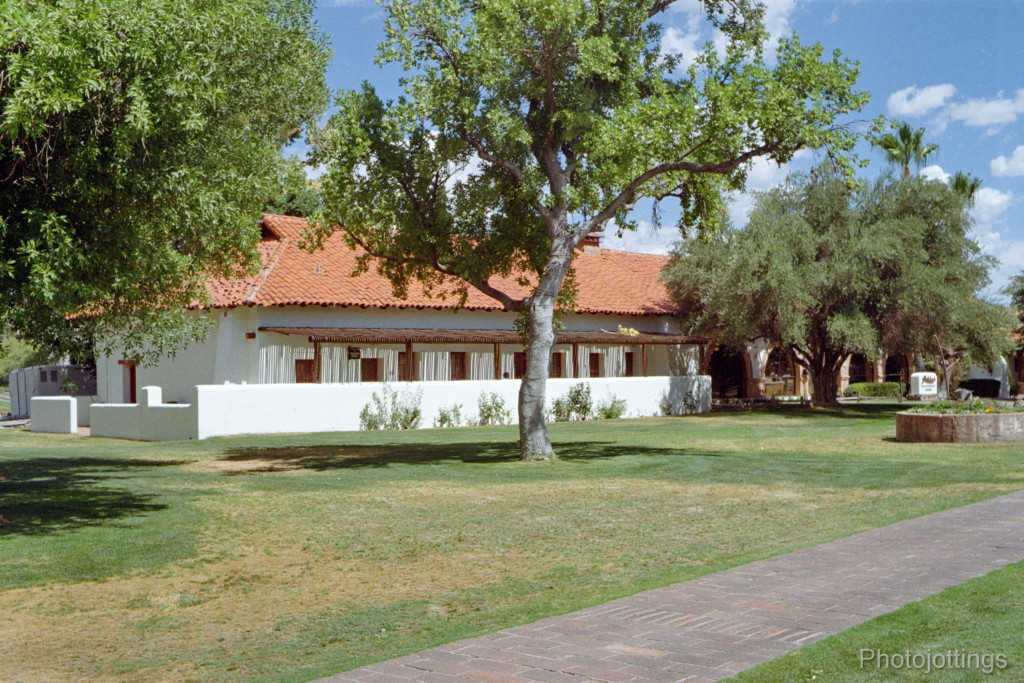 Ranch house, about F/8 or F/11.  Same shot used in this review for comparison. 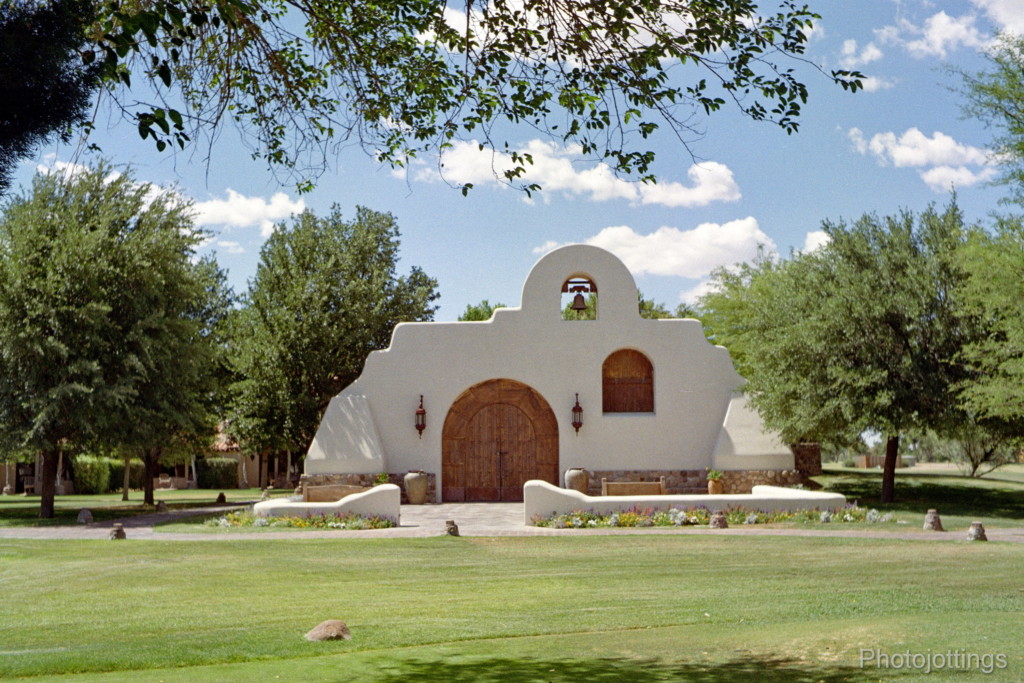 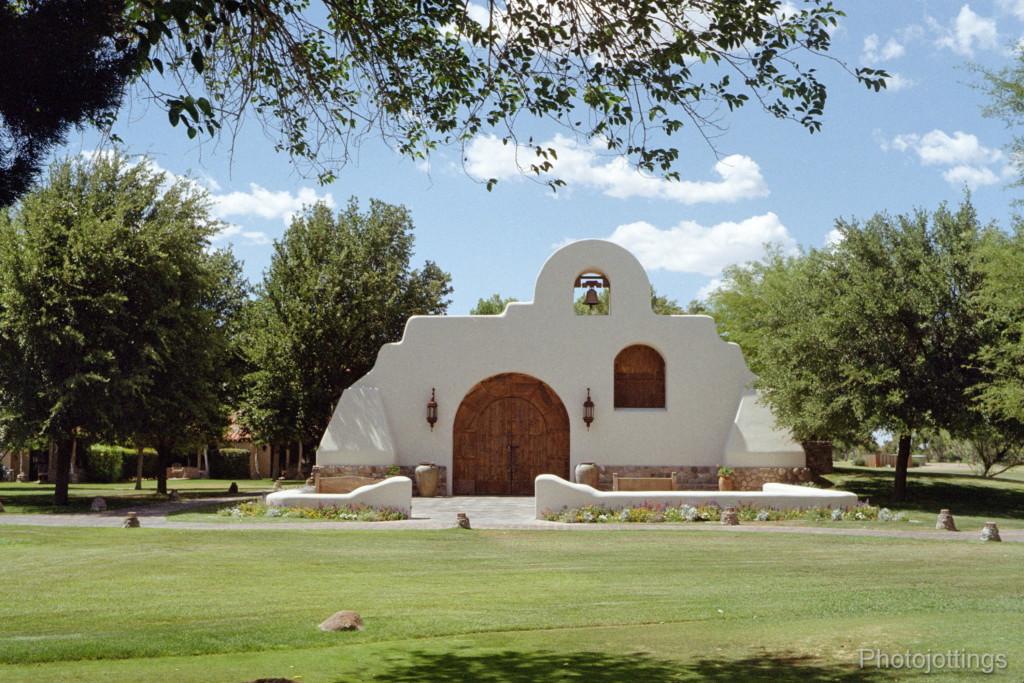 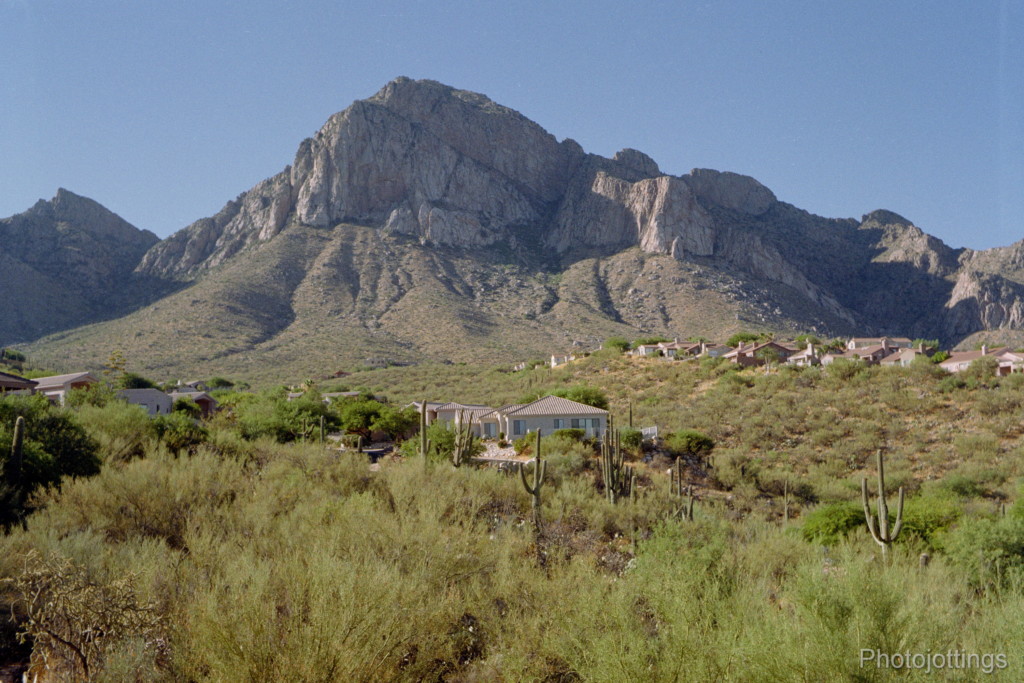 Here’s are standard mountain test scene at about F/11.  It’s pretty sharp in the centers, but remains somewhat soft along the sides.

The Kodak Motormatic 35F is a fun camera to take out for a day of snap shot making, and it turned in a good review all things considered.  Positives include an accurate exposure meter, a handsome design, the ability to use (series V Kodak) filters and a hood, and flash bulbs or strobes.  One thing I don’t really care for is the spring loaded film advance system, which ironically was the main selling feature on the camera.  When you wind it all the way up, you can take about 10 pictures (I got about 11 to 12) before having to rewind it again.  I find the sound a bit loud and annoying, but that’s just me.  If you don’t like the whirling sound of the spring drive mechanism, you can use what Kodak calls ‘quiet mode.’ This works ok, (but I got some weird frame spacing), and it’s what I used for most of my pictures.  You wind the knob about a half turn until you hear a click, and feel some resistance, at which point the film has been properly advanced, and the shutter cocked.

Lens performance is good, but it’s no Schneider Kreuznach like on this Retina camera.  Wide open the lens is a bit soft, but still useable for small prints.  As you stop down to F/8-11, there’s a big jump in sharpness and contrast, however, the sides remain a little soft at all apertures.  Background blur has a crosshatch pattern due to the two bladed diamond shaped aperture.

As stated above, this is an basically an automatic camera with little user input needed. There are four shutter speeds available, but no way to change the aperture.  However, with a little finagling, you can trick the camera into an aperture more to your liking.  I pointed the camera around until the aperture needle was at my desired setting, then I half pressed the shutter to lock in that setting.  If you want a large aperture, but you can’t get the needle to move over far enough because of too much light, just put your finger over some of the light meter, until it gets to your required setting, then half press, compose your shot and press the shutter button.  Another work around would be changing the ASA rating to adjust the exposure, just like using exposure compensation.

In the end, It looks like the Kodak Motormatic 35F is somewhat of a gimmick camera in that it has a unique spring loaded film advance system, (an early spray and pray device), and a whole bunch of ASA and flash guide number settings, in fact, far too many to be useful for this camera, (twenty ASA settings, and fourteen Flash guide number settings!!), but I guess Kodak thought it would look impressive in the specs sheet.

All said and done I do like the camera; it works in auto mode very well, the pictures are exposed properly, and it seemed to favor small apertures so your pictures will be sharp, in fact the owner’s manual suggests 1/80s as a  general use shutter speed.  The spring motor advance mechanism works well too, and it’s actually useful for those quick shots out of the car or bus window while on vacation!

I’d recommend the Kodak Motormatic 35F, but only if the meter is working, if not, you have a shelf queen on your hands.  The Motormatic ’35’ model without flash allows you to adjust the aperture manually, as do the ‘automatic’ 35 cameras.

That’s it for the Kodak Motormatic 35F review; please consider buying your goodies through my links, doing so helps support the site, thanks!