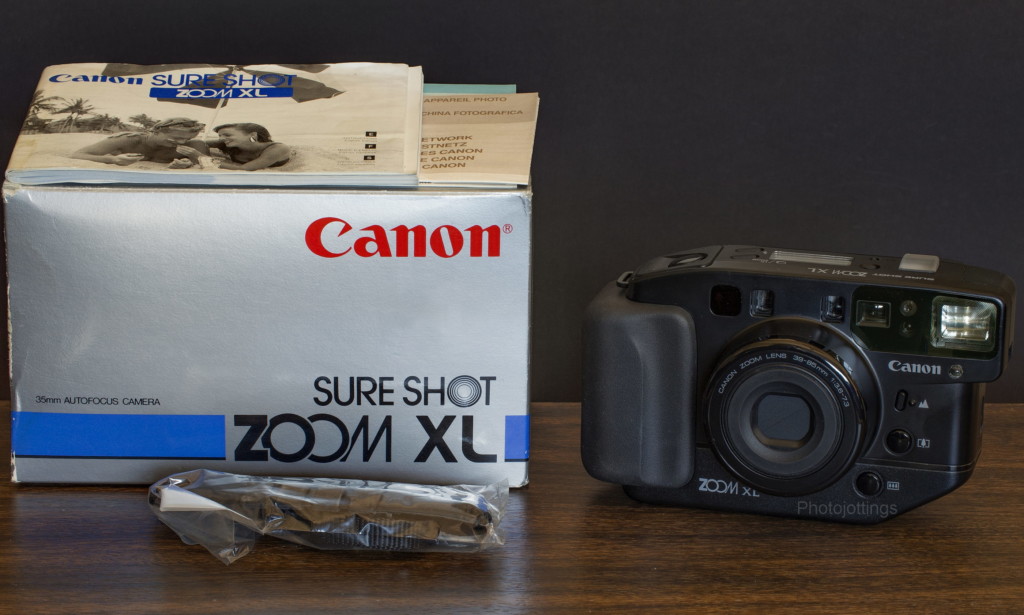 Our latest camera for review is the 1989 Canon Sure Shot Zoom XL, a very expensive point and shoot zoom that Canon claimed had the optical quality comparable to Canon FD interchangeable lenses; well, we shall see about that; (if you’re impatient, scroll down to the test pictures for instant gratification, or displeasure).  Other high end, and almost ‘SLR’ like features include a powerful flash that zooms with the lens; almost two frames per second continuous shooting; and a very useful docked remote control, (a nice feature that unfortunately has not found its way to the cameras of today—some thirty years later).

I bought this camera as new old stock, it still had the sealed wrappers on it; and believe it or not, the batteries in the docked remote control are still good!  As a side note; this is the only camera so far I’ve reviewed that originally came with factory installed batteries, in both the camera (2CR5), and a couple of CR1220 for the remote, however, the main camera battery still had some power, but not enough to operate it properly.

I have to laugh; Canon tells us in the owner’s manual that when looking at the little green and red warning lights for the flash and AF lock next to the viewfinder, that you will observe blinking in the range of 4Hz, which means the subject is too close, and 16Hz when AF is ‘impossible.’  How many people know what ‘Hz‘ is?  I guess Canon thought that describing the blinking as 4, or 16 times per second would be confusing?

The ‘high end’ Canon Sure Shot Zoom XL with 39-85mm lens has a nice build quality, and is very refined in operation, especially when you consider the fact that it’s a Sure Shot, which are normally purchased by novices or second cameras for advanced amateurs.  Additionally, the camera is fully automatic, with only a couple of flash control options, and unfortunately has no exposure adjustments whatsoever, so let’s hope the auto exposure system does a good job; and if not, the camera becomes a nice looking paper weight for your desk.

Will the Sure Shot Zoom XL take pictures that are comparable to Canon’s ‘FD’ system, or is it just another 1980s point and shoot zoom camera that’s best left for the museum basement?  Let’s find out now!

Name; Canon Sure Shot Zoom XL in the US.  Autoboy Zoom Super in Japan, and Prima Zoom F in Europe.

Box contents; camera, including the main camera battery, and a remote control battery is included from the factory!  Owner’s manual, a black vinyl carrying case and neck strap.

Shutter and speed; programmed electronic shutter, speed from 2 seconds to 1/250s but not user adjustable.  Self timer with Remote control.

Distortion; looks mild at all focal lengths from the pictures below.

Accessories for this model; apparently none.

Go here for an owner’s manual about halfway down the page. 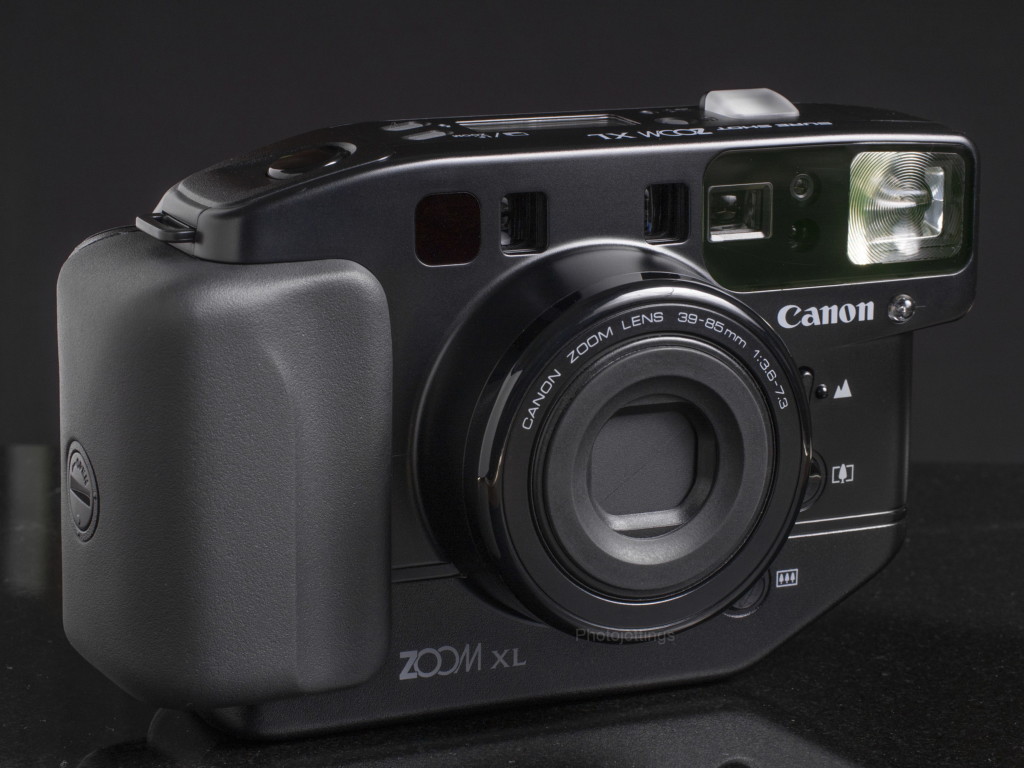 The Canon Sure Shot Zoom XL has a somewhat odd shape, with a large right grip, and protruding flash, it almost looks like it has a vertical grip attached along the bottom. 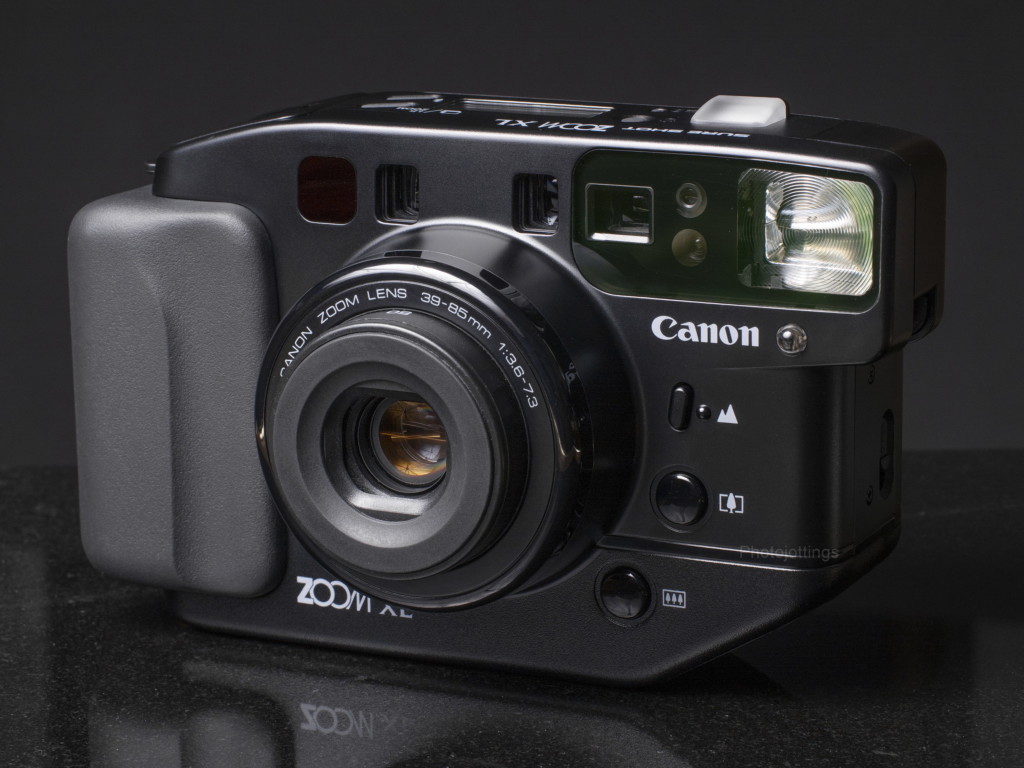 The camera is powered on and ready to shoot.  The end of the zoom lens has a rubber coating around it, and it won’t take any filters.

The rectangular openings along the top left are for AF, and on the right are the viewfinder, self timer and remote windows.  The flash zooms with the focal length, meaning it adjusts the dispersion angle accordingly; a unique feature on a point and shoot camera.  Notice the clear plastic cover for the flash/viewfinder area has a green coating, I guess to reduce reflections in the viewfinder, but I’m not sure it matters for the flash.

The oblong button at the top (on the right) is for setting the focus to infinity; press in and hold while taking the shot.  Doing this ensures the camera doesn’t miss focus on foreground clutter and window glass.

The two round buttons are for zooming in, (top), and out, (bottom).  The little round button by the Canon logo blinks red when the self timer is  set, and/or the remote is in use. 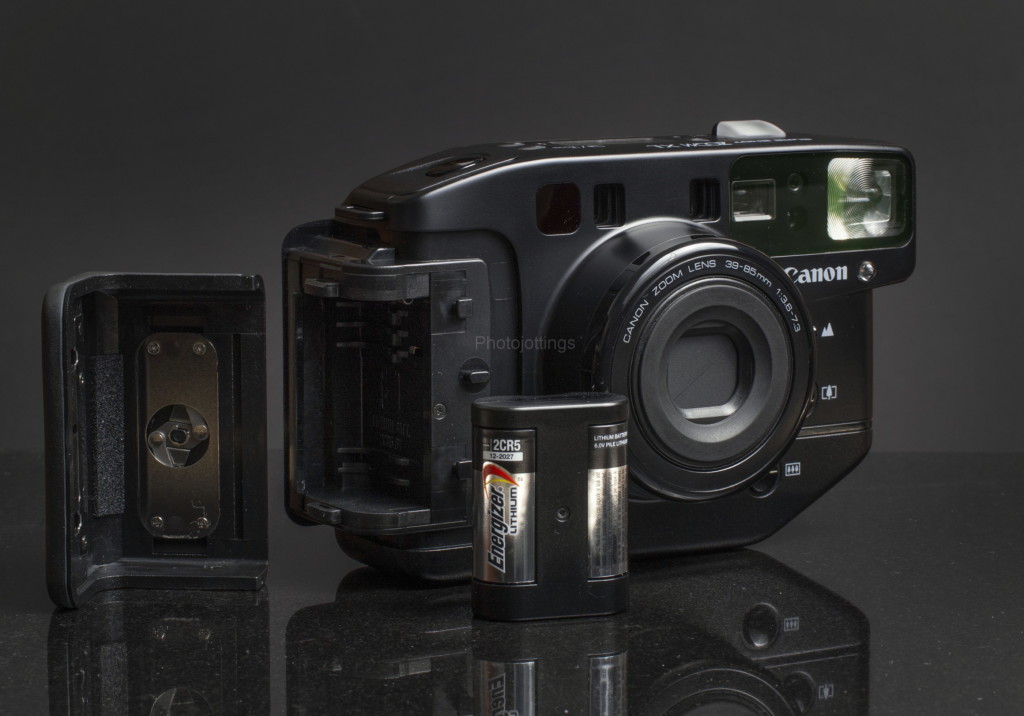 The handgrip comes off with the turn of a coin.  The Canon Sure Shot Zoom XL takes a rather expensive 2CR5 battery, here B&H, Amazon. 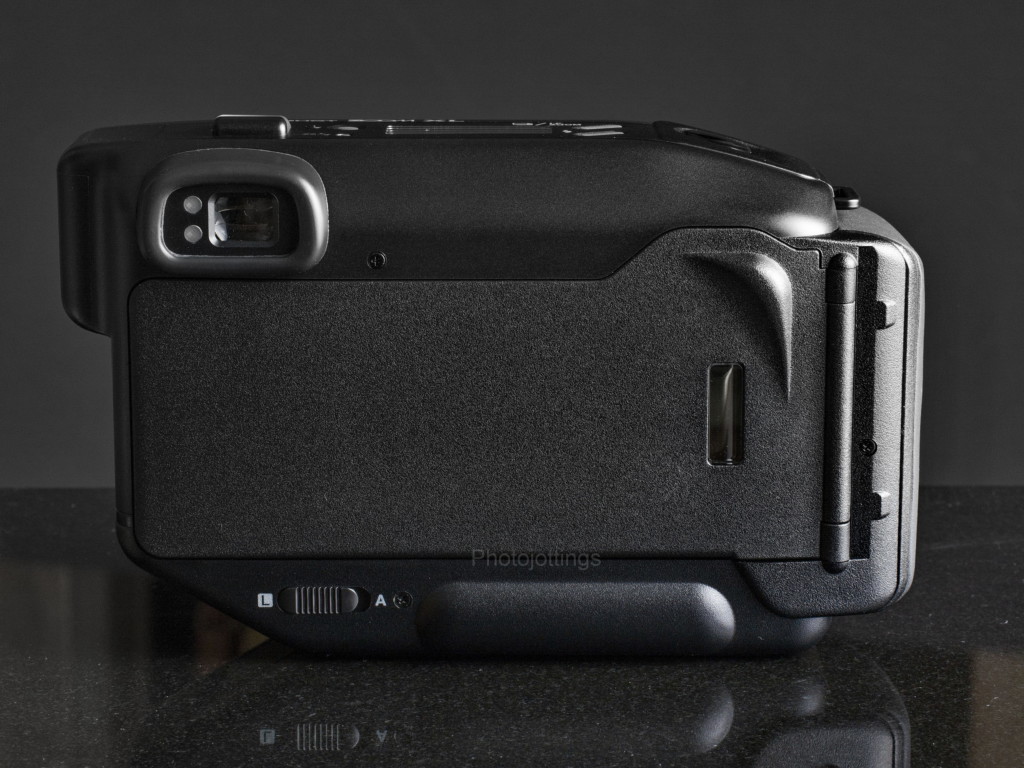 The back cover is quite plain, with only a film reminder window and tiny thumb rest.  The on-off switch is at the lower left, with ‘L’ lock for off, and ‘A’ auto for on.  The viewfinder is clear and bright, but a bit small.  The two small lights on the left side of the viewfinder window are; the top one is green for AF confirmation, and the bottom one is red for flash status and shake warning. 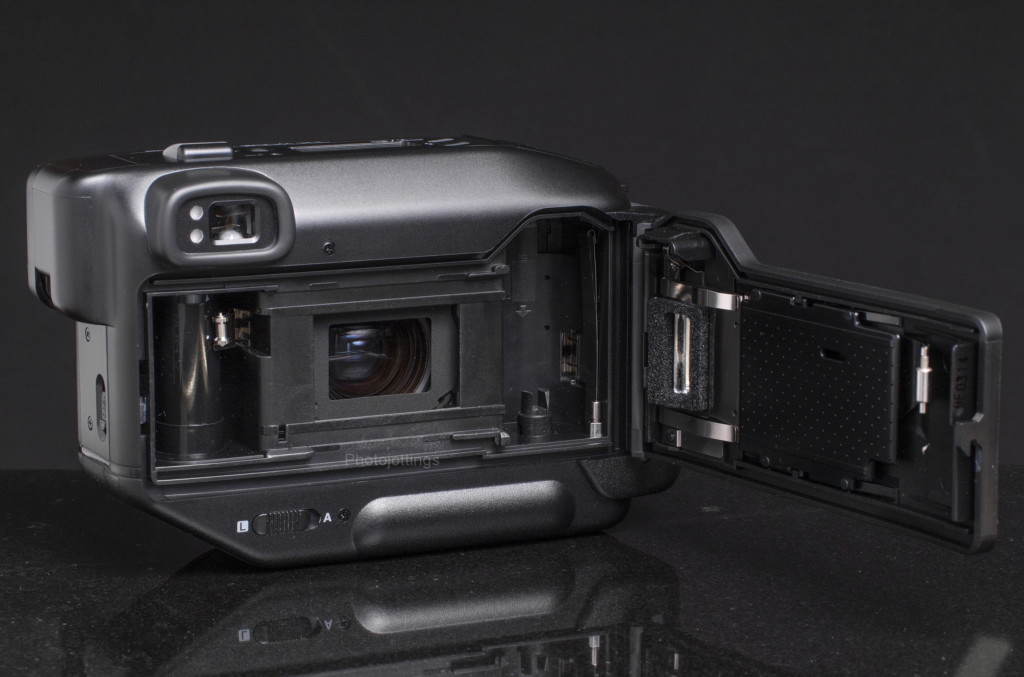 A look inside of the camera. The DX code reader is at the back of the cartridge compartment, but not visible in this shot.  At the back of the lens you’ll see a rectangular flat black stray light shield.  The film pressure plate is metal, and the film tensioner is spring steel.  I see moltoprene (spongy light sealing material) around the film reminder window, but nowhere else. 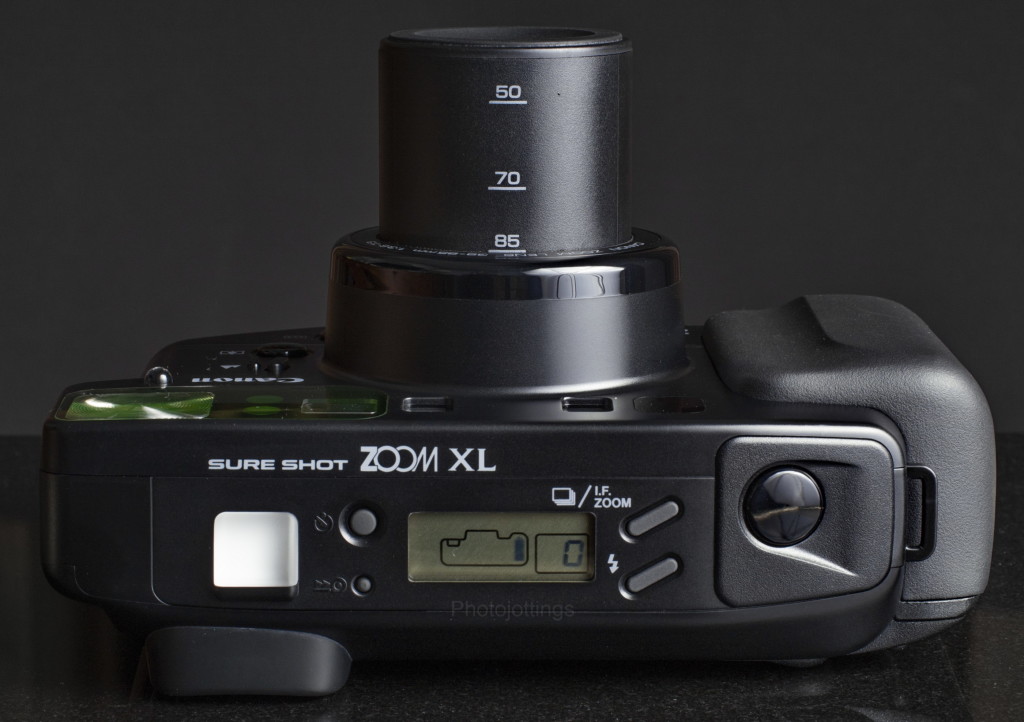 The lens extends about 30mm at full zoom.  Although there are marks at 50mm, 70mm and 85mm, you can set the zoom at any length in between.

The large white square is for illuminating the viewfinder guideline marks, and focus points.

The round gray button is for setting the self timer, and below it is the tiny film rewind button.

The oblong gray button to the right of the LCD controls the shooting mode, single or continuous, and Intelligent Framing mode.  The button below is for flash mode; on, off  or slow sync.  Both the shooting, and flash modes go back to default when the power is turned off.

The shutter is operated by the large black button on the right; it has the standard half press pre-focus feature. 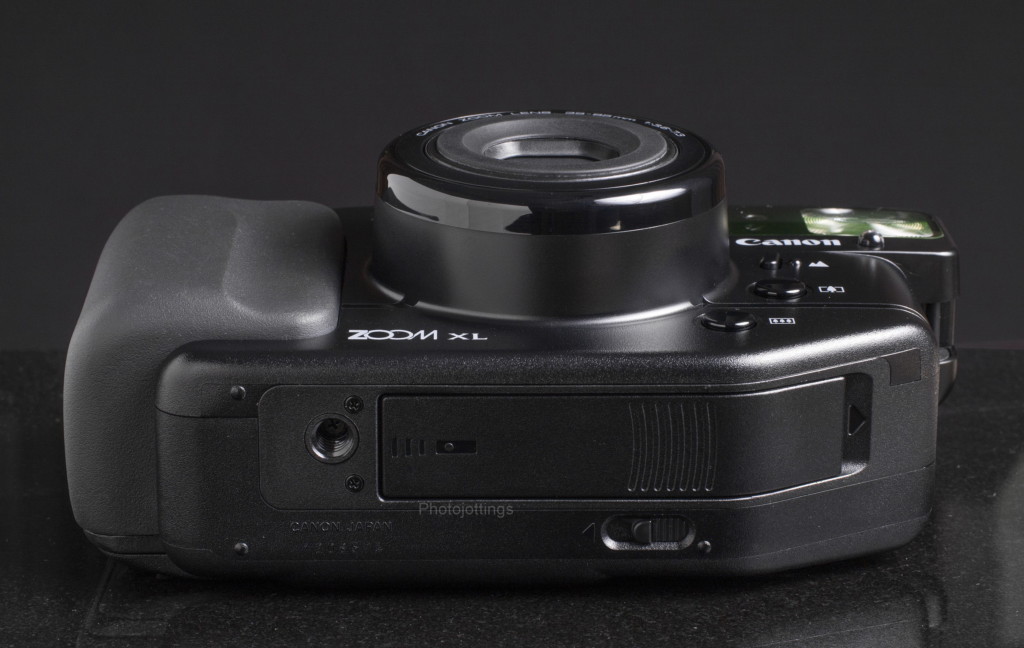 The remote control is stored underneath the camera; you slide the little switch under the remote, and slide the whole thing out to the right.   There is an off-center, and what appears to be a plastic(!) 1/4-20 tripod socket. 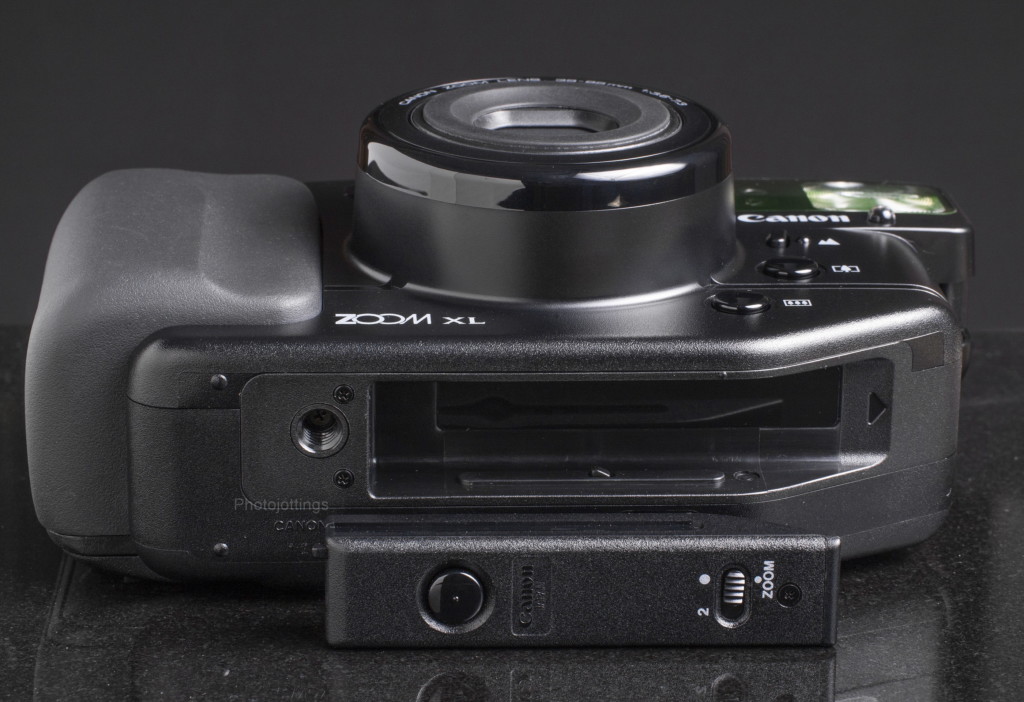 The remote has controls for the shutter and zooming.  The ‘2’ symbol is for a 2 second shutter delay, and ‘Ο’ symbol for instant shutter, or intelligent zoom when set.

When removed, the remote will operate for a period of eight minutes, after that it will turn off and you have to replace the controller and remove it again.

Above is the vinyl case which I forgot to show in the top picture.  It’s really just for protecting the camera as there isn’t any way to carry it around your neck or belt.  I guess the loop is for running the camera neck strap through and letting it hang so you don’t lose it while taking a snap. 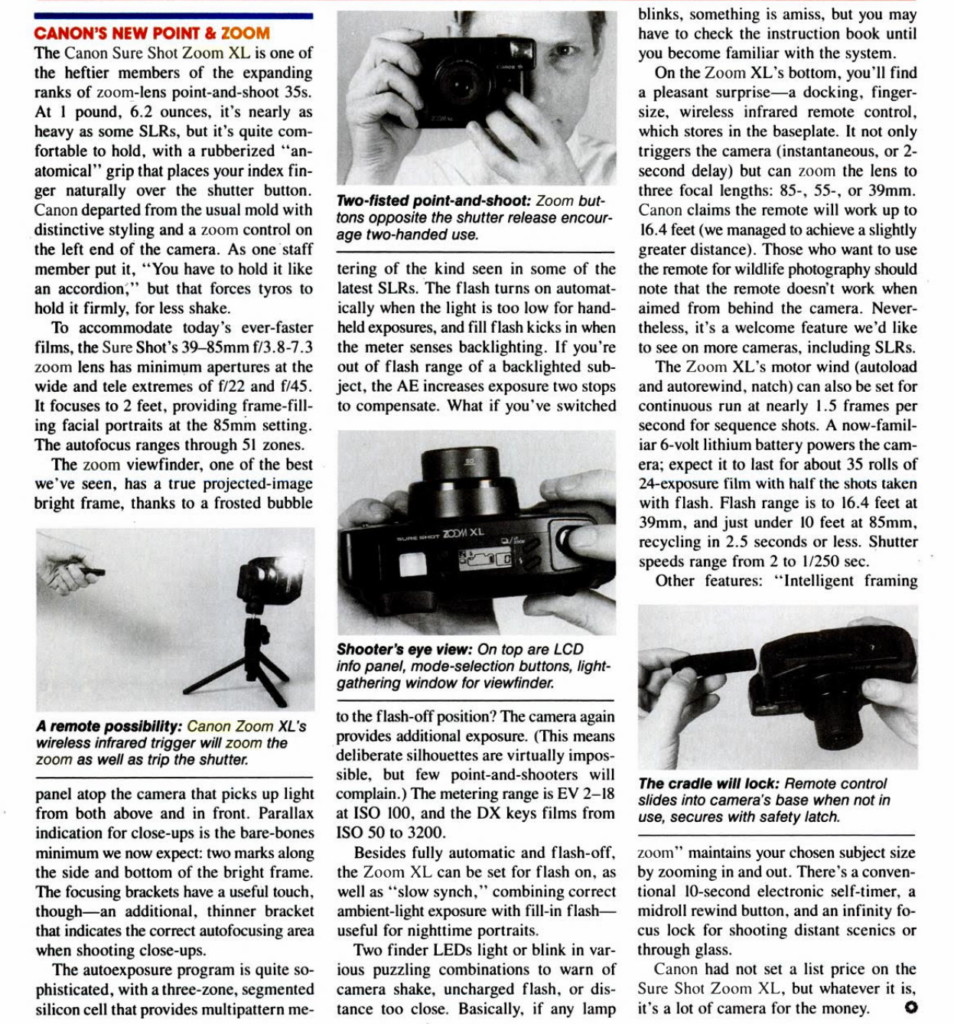 This introduction article appeared in the October 1989 issue of Popular Photography.

Here are some test images scanned on a Pacific Image PrimeFilm XA SE, B&H, Amazon.  All are 4000 pixels wide.  Kodak Gold 200 used for all shots.  Click for larger images. 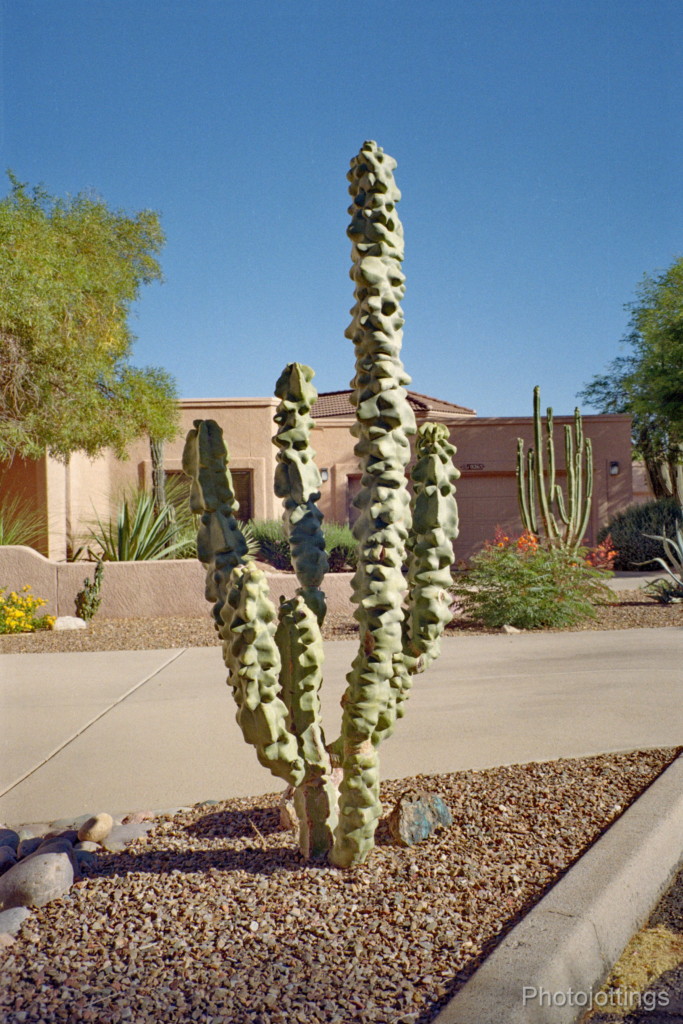 Totem pole cactus.  Taken at 39mm; it looks like it focused accurately. 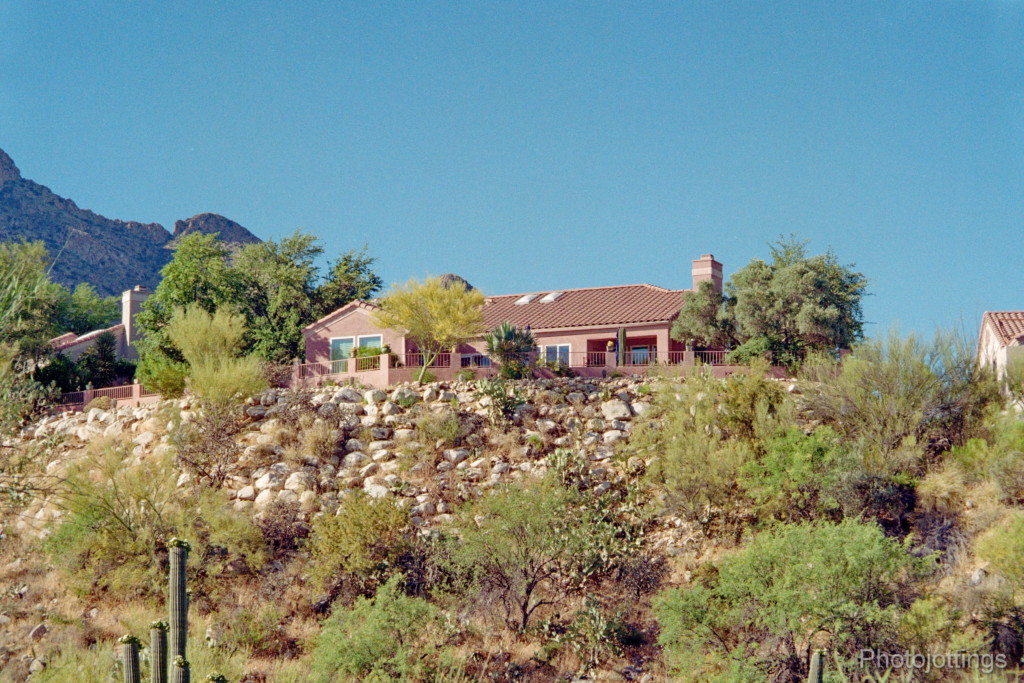 Zoomed to 85mm.  Quite sharp in the whole central area, with some softening along the sides. 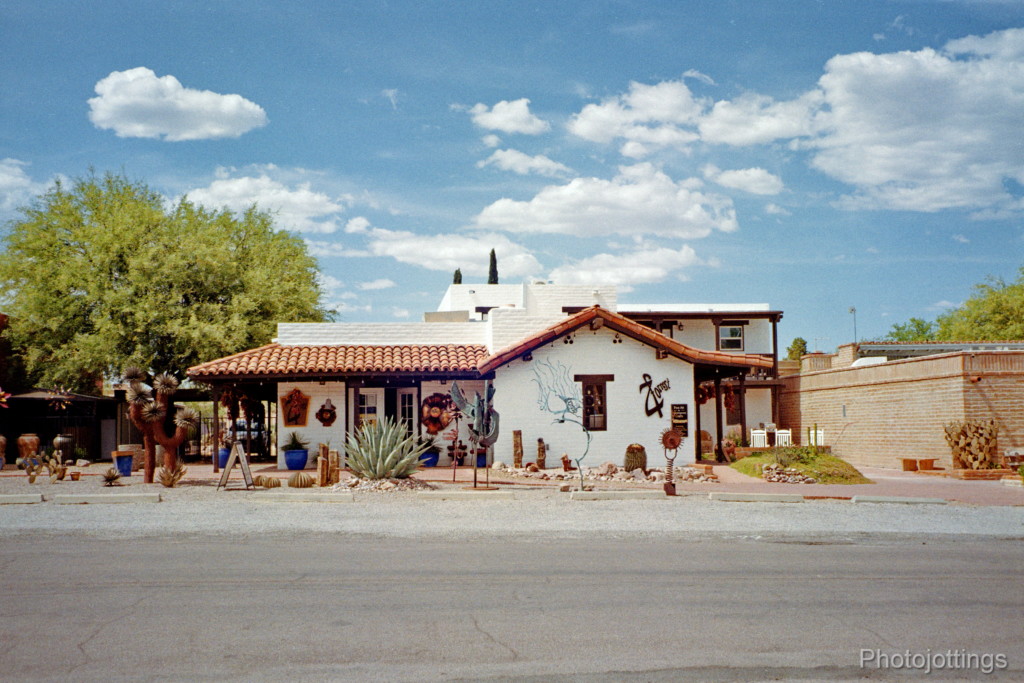 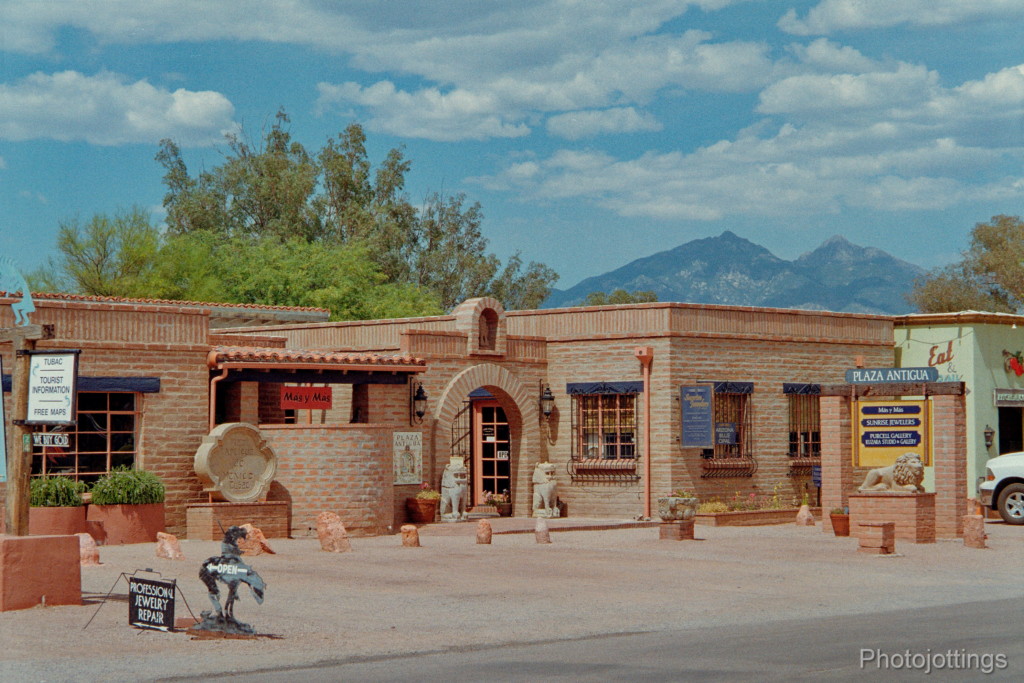 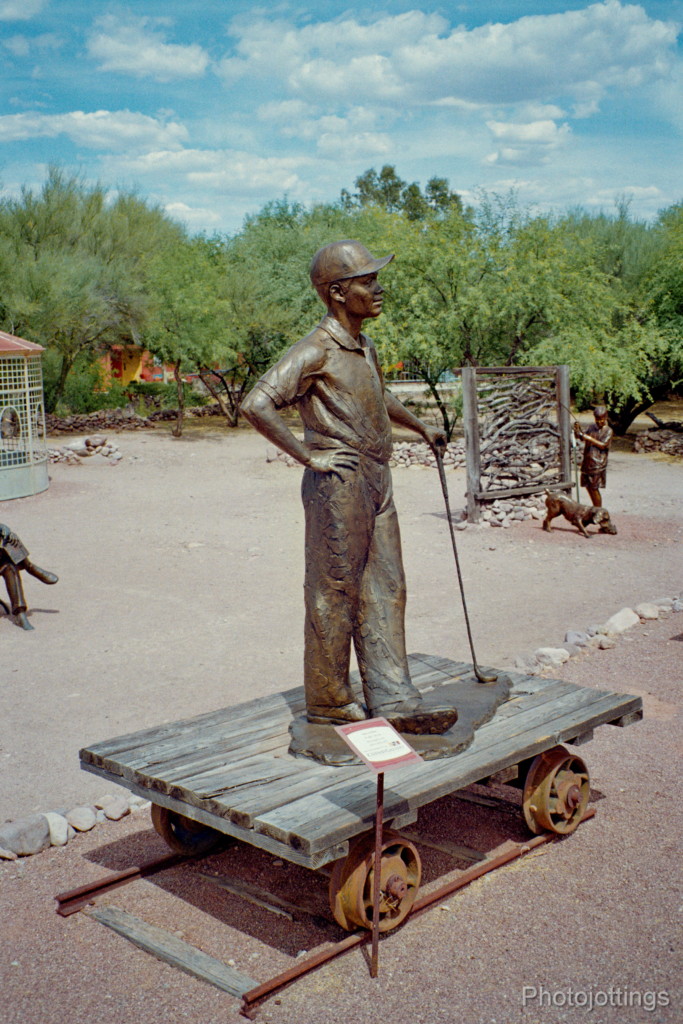 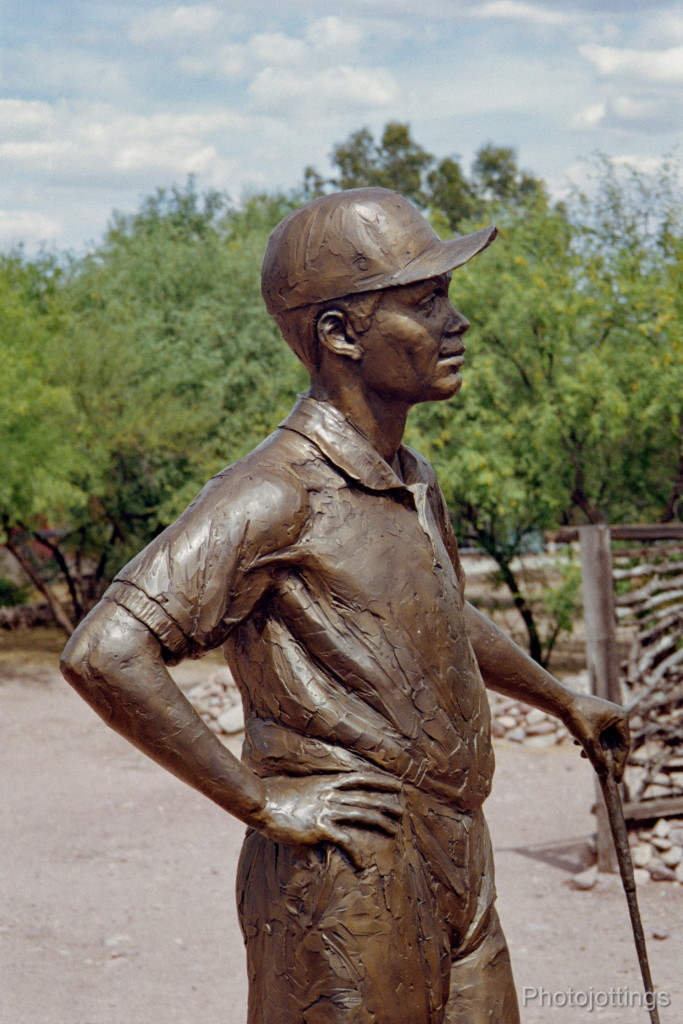 Pro Golfer Matt Kuchar at 85mm.  I see decent background blur, but maybe the focus hit the shoulder instead of the face. 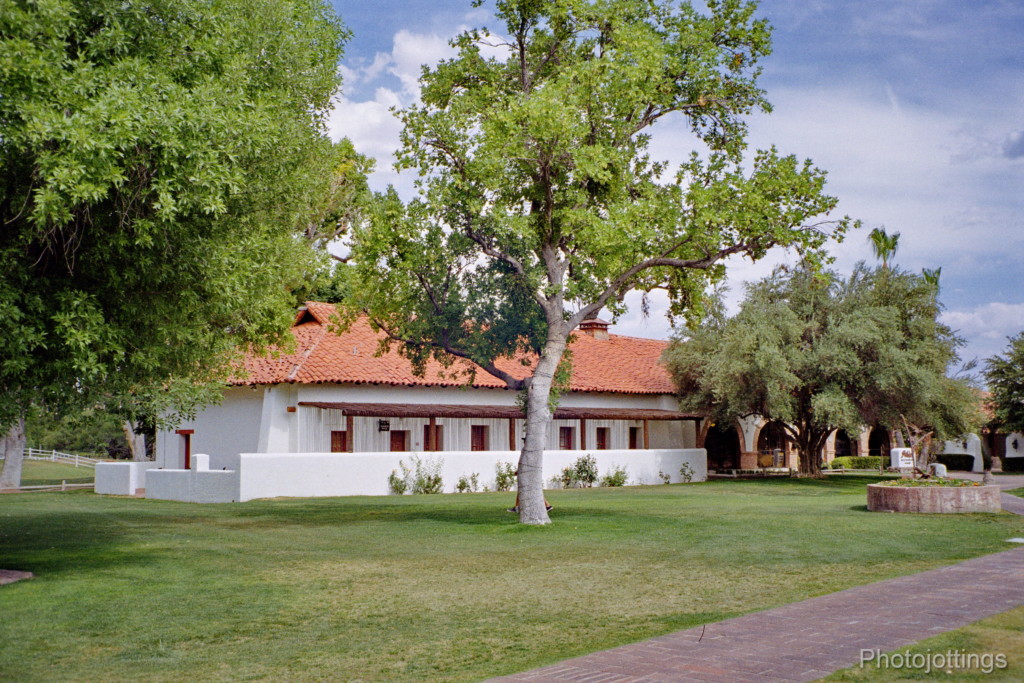 A sneaky streaker caught behind the tree at 39mm.  Very sharp in the central area, with minor softening along the sides.

The Canon Sure Shot Zoom XL was fun to use, and it worked flawlessly.  My copy was probably made close to the end of the run for the model, maybe in the early 1990s, and I was the first one to actually use it. I wish I had it back then for recording my travels and friends, but I was broke, and only had enough money for this one.  Actually, if I had $300 to buy this Sure Shot Zoom, I’d more likely have purchased a Canon ‘A’ body with kit prime and used it with my Canon FD 28/2.8 lens I bought in 1985 for shooting interiors; and boy that lens seemed really wide at the time, but now it seems almost too long, at least for inside shots.  The Sure Shot Zoom XL has a range of 39-85mm; so it barely hits what I consider wide angle coverage, and seems too restrictive today, but back then it was very common.

There are some good things to say about this fully automatic camera; the lens is super sharp in the whole central area at all focal lengths, and very noticeable at the wide end; it definitely has prime lens sharpness, color and contrast.  There is some minor softness as you near the sides of the images at all focal lengths, but that’s really very good performance, and as good as some of the ‘FD’ zooms from the 1980s; I know because I used them on my Canon AE-1 Program, and later A-1.  Focusing seems very quick and accurate; I had no out of focus shots, even in dull, after sundown lighting.  Also, the camera handles well, and does have some heft to it, but it’s still much lighter, and has a smaller footprint than a SLR with zoom lens.  The exposures overall were pretty accurate, but I think I’d like at least another stop of light for my taste when using print film.  Canon claims the Sure Shot Zoom XL will “detect backlight situations, and adjust the exposure by 2 steps,” but my results suggested the feature didn’t work very well.  I think the camera chooses to protect the highlights by default, maybe as a precaution for slide film that Canon thought would be used more often than print film; however, I haven’t tried any slide film yet to confirm my theory.  A workaround for this is: tape over the DX code on the film canister of either ISO 200 or 400 speed print film, and the camera will default to ISO 100, so in this way you get exposure compensation; I may do that on my next roll.

For the record, I did play around with the (intelligent framing) I.F. zoom mode but found it to be useless for my type of shooting.  The idea is that you can frame your subject at a certain focal length or magnification, the camera will memorized it, and will automatically frame the subject at the same apparent size using a different zoom length as you change your shooting distance and angle from the subject.  This type of gimmick was popular back then, but it’s a little confusing to set up, and not really worth it in my opinion, so I guess that’s why manufacturers drop it a few years later.

If you’re going to trust a camera to make all the decisions for you, and you want sharp shots for enlarging later on, the Canon Sure Shot Zoom XL should work nicely if you don’t mind the zoom range.  But just between you and me, I’d rather carry this one around for fun.