Kodak Moment #15, off to the races at Rillito Park - Photo Jottings

This installment of the Kodak Moment takes us back to February, 1958; the location, Rillito Race Track, Tucson, AZ.

My Dad took these Kodachrome snaps while visiting the race track with this camera.  Back in 1958 it was known as the ‘Rillito Race Track,’ but now it’s called ‘Rillito Park,’ where you can watch seasonal horse racing, play soccer, or attend art shows and farmers markets. If you go here, you’ll see an aerial view of the place as it is now; and it looks like the original grandstands are still there, but the lake is gone.

According to the Rillito Park Foundation, the Rillito Track is recognized as the birthplace of modern quarter horse racing in America with many innovations created, such as the chute track layout, photo finish, and various conditions for pari-mutuel wagering.  Internationally renowned Thoroughbred greats started out at Rillito, with multiple KY-Derby winner and Hall-of-Fame trainer Bob Baffert and the jockey brothers Angel and Milo Valenzuela the most famous among them. 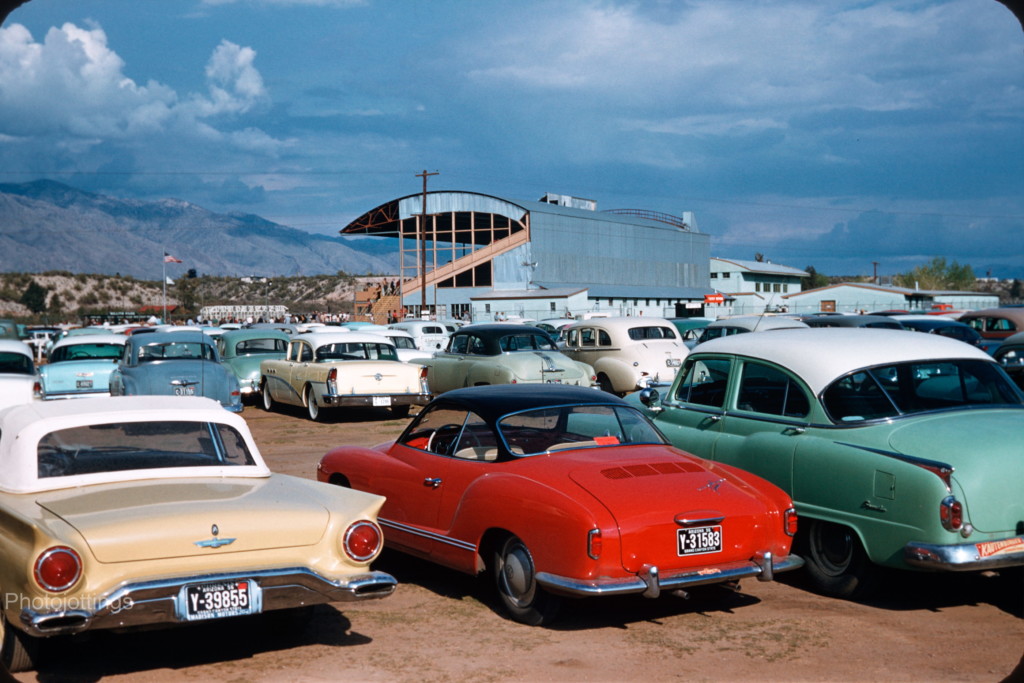 This was taken from the parking lot looking NE. Can you name the cars? I’ll try: on the left is a “57 T-Bird Convertible in Inca Gold.  In the middle is a 1957? Karmann Ghia hardtop in Cardinal Red?  And an ‘old’ Buick Special four door sedan in Glenn Green. 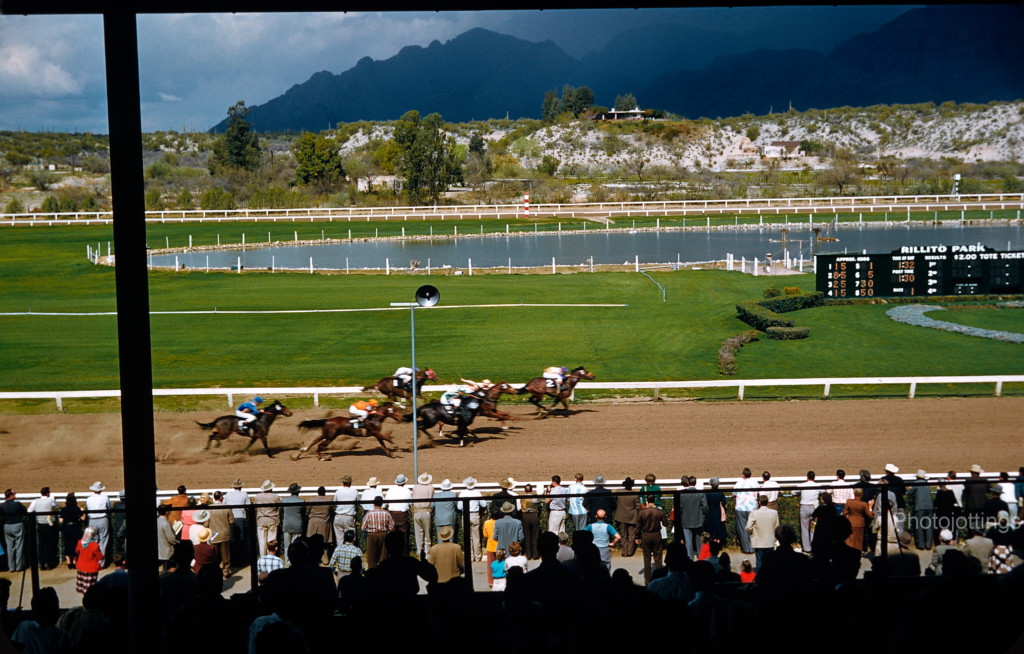 This is the same picture that I used in the Aires review.  The black strips are from the beams in the building.  Pusch Peak is in the background, and I live right behind the mountain where I take the test shots that look the other way. 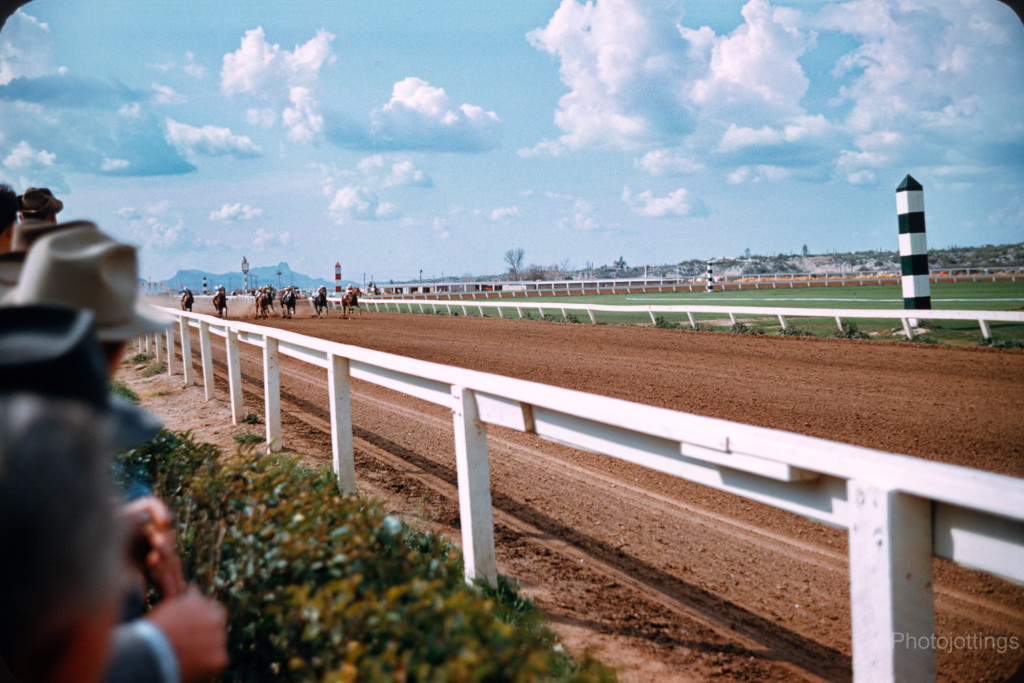 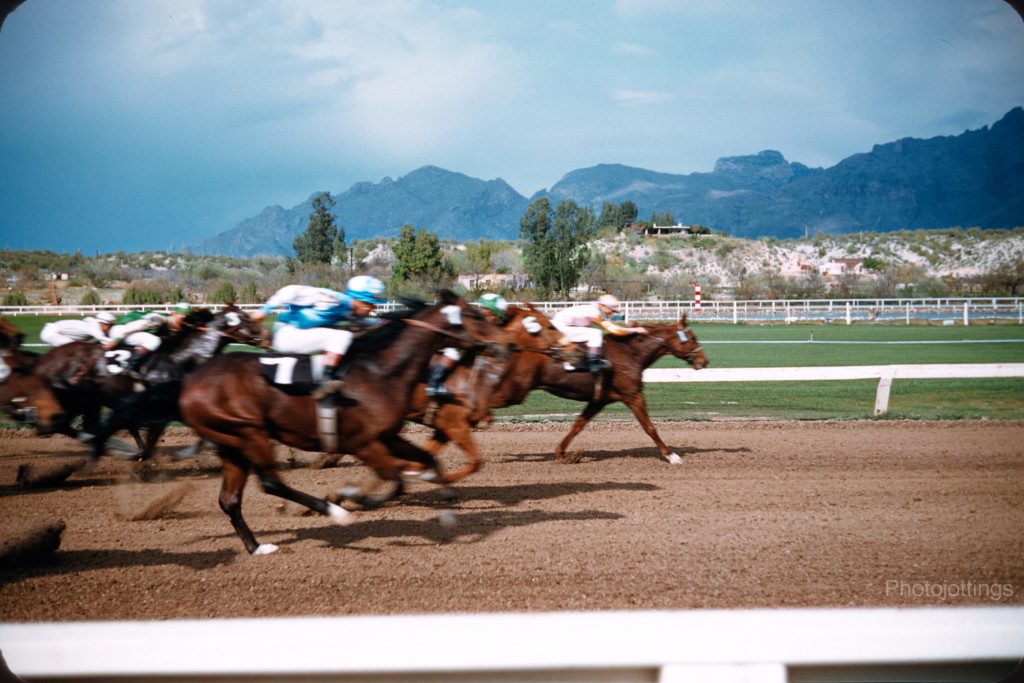 It’s Tim Tam by half a length. 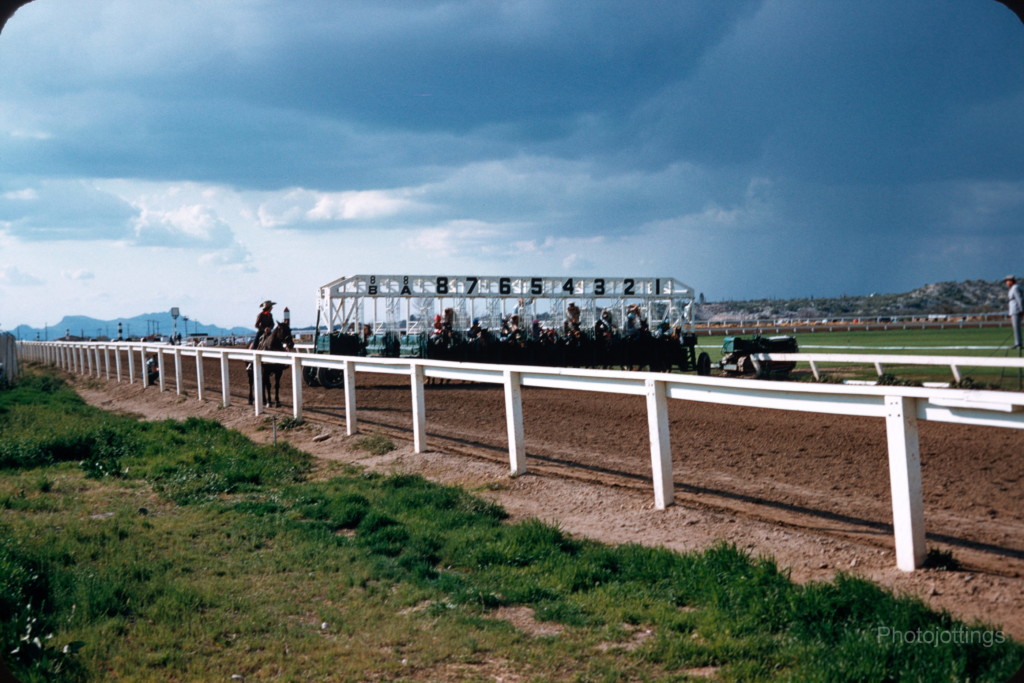 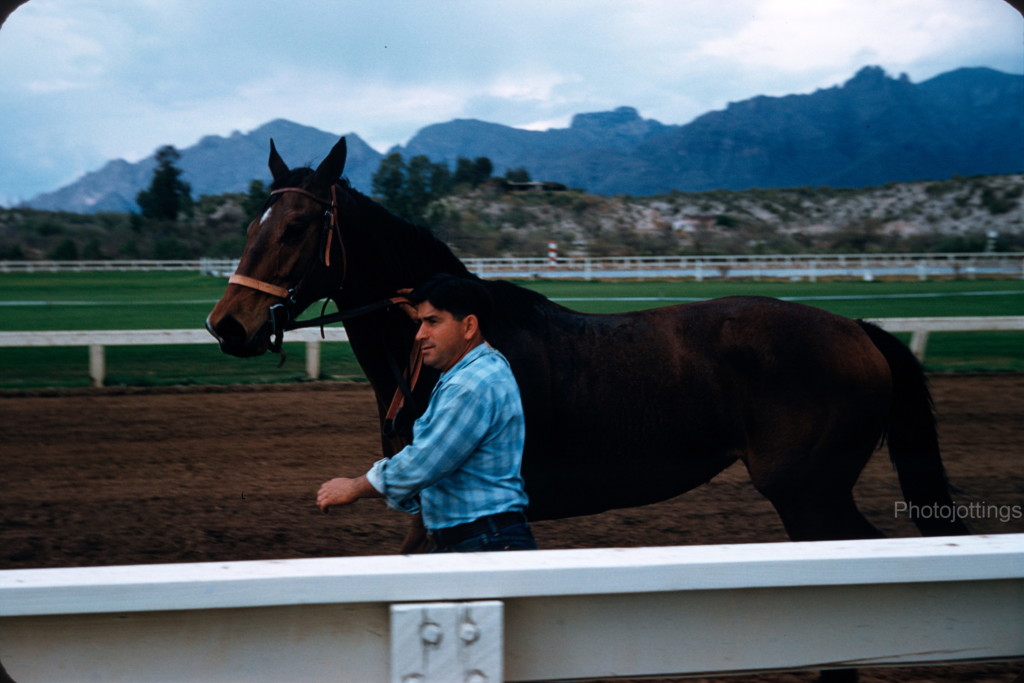 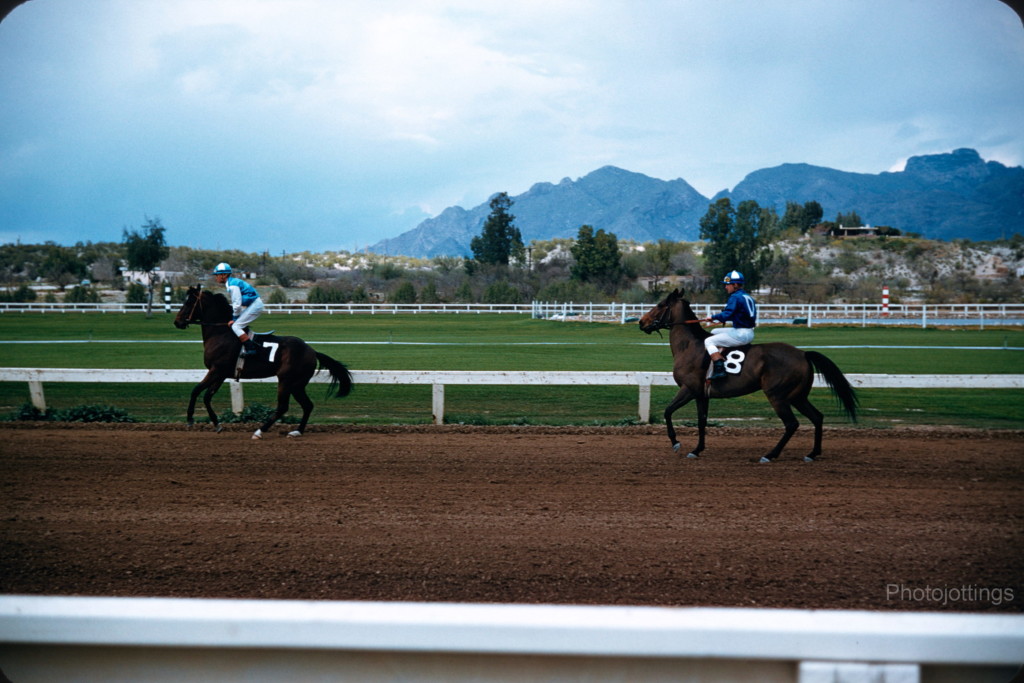 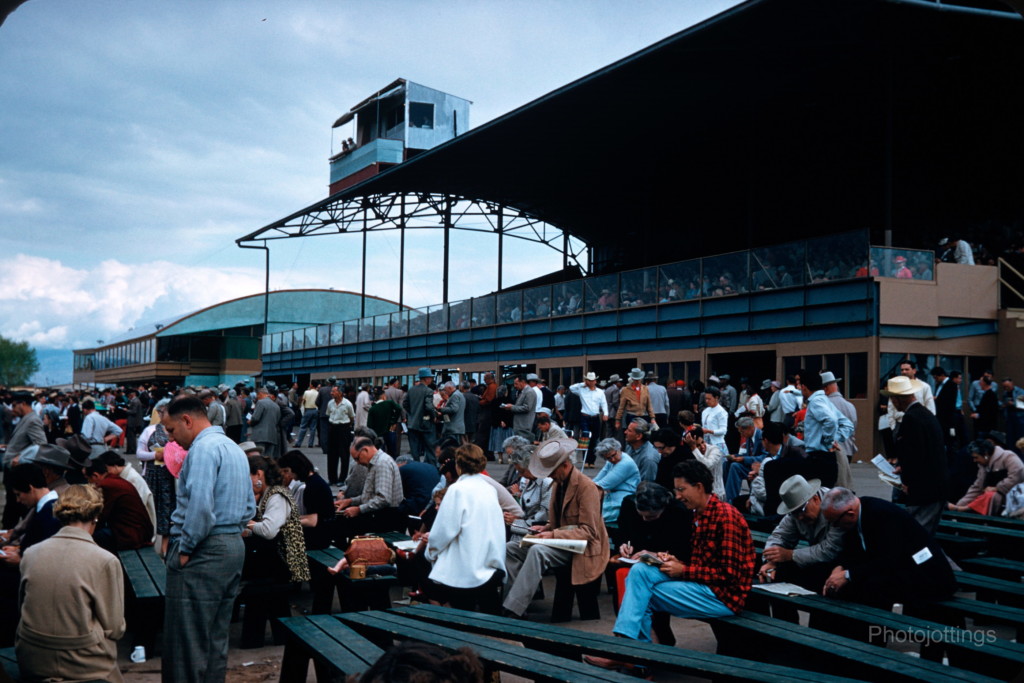 The west grandstands.  It appears the betting windows are starting to close and the next race is coming up quick. 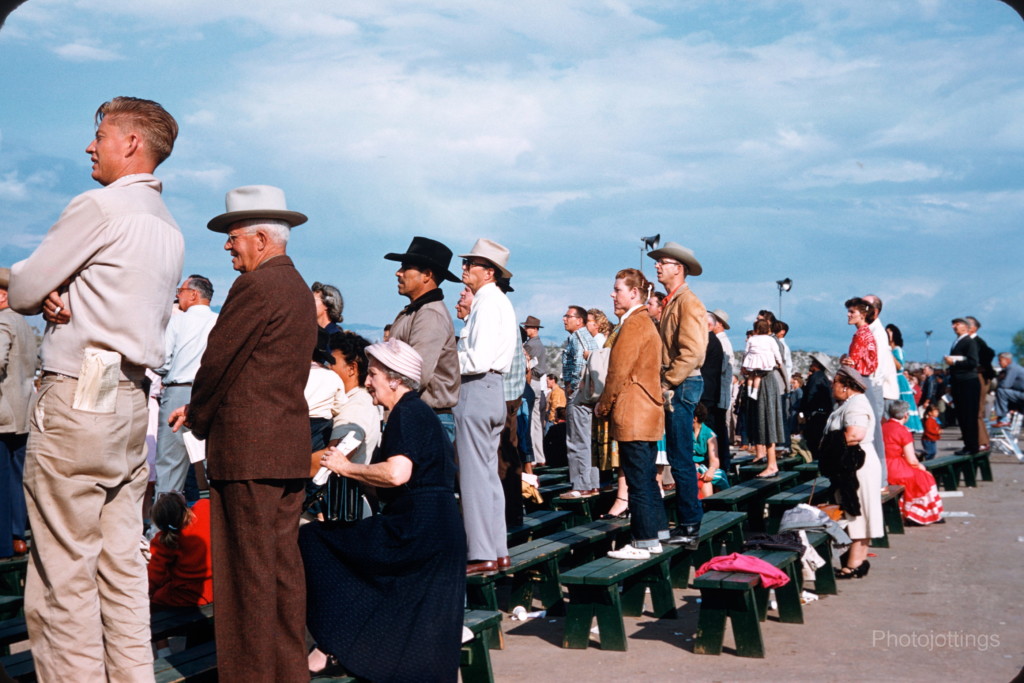 Bench standing is ok if you’re slim, but don’t try it if you’re overweight. 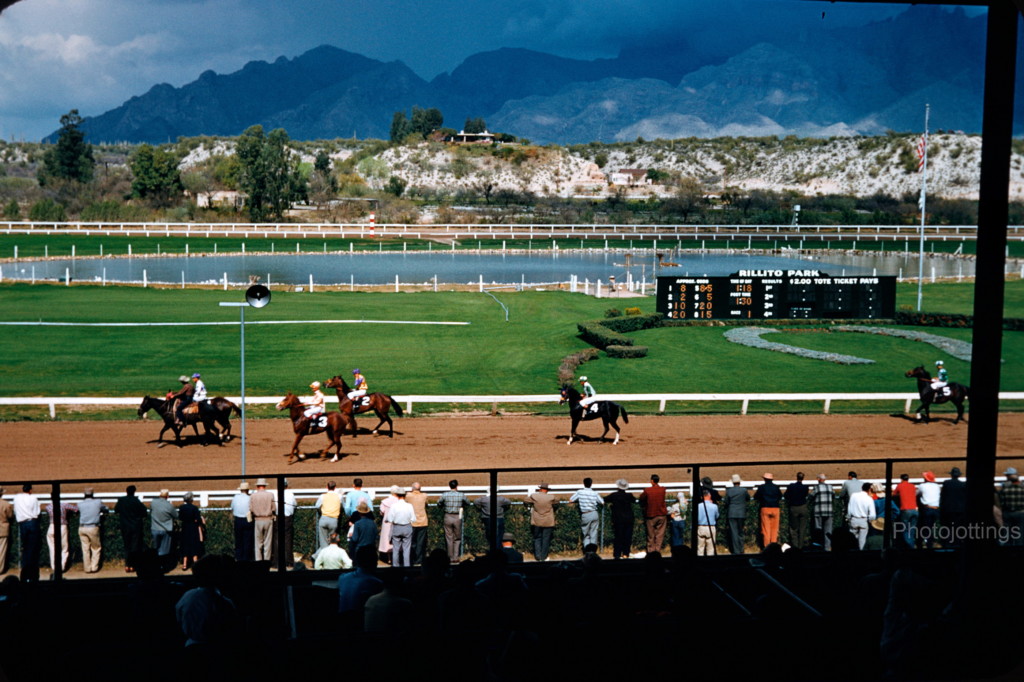 A slightly different view from the second picture in the series.

That’s it for this trip down memory lane, hope you enjoyed Dad’s Kodachrome snapshots from a Tucson AZ horse race in February 1958.