The 1980s brought us some goofy cameras, and the Ricoh Mirai (the future) 105 Zoom is one of them; it’s boxy and almost camcorder like in it’s appearance since the flash and AF sensors are on the side of the lens, instead of along the top as it would be on a traditionally designed 35mm type camera, so it’s actually a regular camera, but it looks odd as it has a big upturned grip for your right hand.  The Ricoh Mirai 105 is not the only unusual looking camera from the crazy 80s, (remember the Samurai?), did you know Olympus teamed up with Ricoh (or vise versa) to sell their own version of this camera, and during the partnership they exchanged lenses and other parts to produce different models, presumably as a cost saving measure.

The Ricoh Mirai 105 Zoom was rather expensive for a late 1980s ‘bridge’ type camera, but it offered some nice features that allowed you to control how your pictures would turn out, almost like an SLR.  The Camera sports an ‘ME’ mode, which lets you take multiple exposures; pretty cool, and see my bad example below; it also has an infinity focus button so you can be sure you capture the mountain scene, instead of mis-focusing from a low contrast area in the center of the picture where the AF zone is.  Macro mode automatically extends the lens to full telephoto, and moves the AF point to adjust for parallax, which is a nice touch.  The end of the lens is threaded for relatively inexpensive 40.5mm filters, but oddly not mentioned in the owner’s manual??  Of course you also get exposure compensation, ranging from -1.5, to +1.5 in half stop increments; so all said, a pretty good feature set!

The only real downer for the camera is that it isn’t an SLR, so you can’t see what’s happening in the viewfinder, such as focusing, depth of field, filter effects and whatnot, but if you’d like that, see this review, or check out the top line Mirai.

So is the Ricoh Mirai 105 Zoom ‘the future’ of cameras, or is it just another dud from the crazy 80s?  find out below!

Shutter and speed; 2s to 1/500s, not user adjustable.  Cable release option, but you must use proprietary Ricoh electronic type.

Double exposure prevention; yes, but it can be over-ridden in ‘ME’ mode.

Accessories for this model;  apparently only one item, and that’s a Ricoh electronic shutter release cord.

Crippling features and omissions; 2 seconds minimum shutter speed not sufficient for good night shots.  Camera is about the same size as an SLR with kit zoom lens.

Other models; the ‘Mirai 105’ is the little brother of the ‘Mirai‘ which was a high spec bridge camera that had a 35-135 lens, with available wide and teleconverter lenses.  The ‘Mirai’ was the same as the Olympus AZ-4. 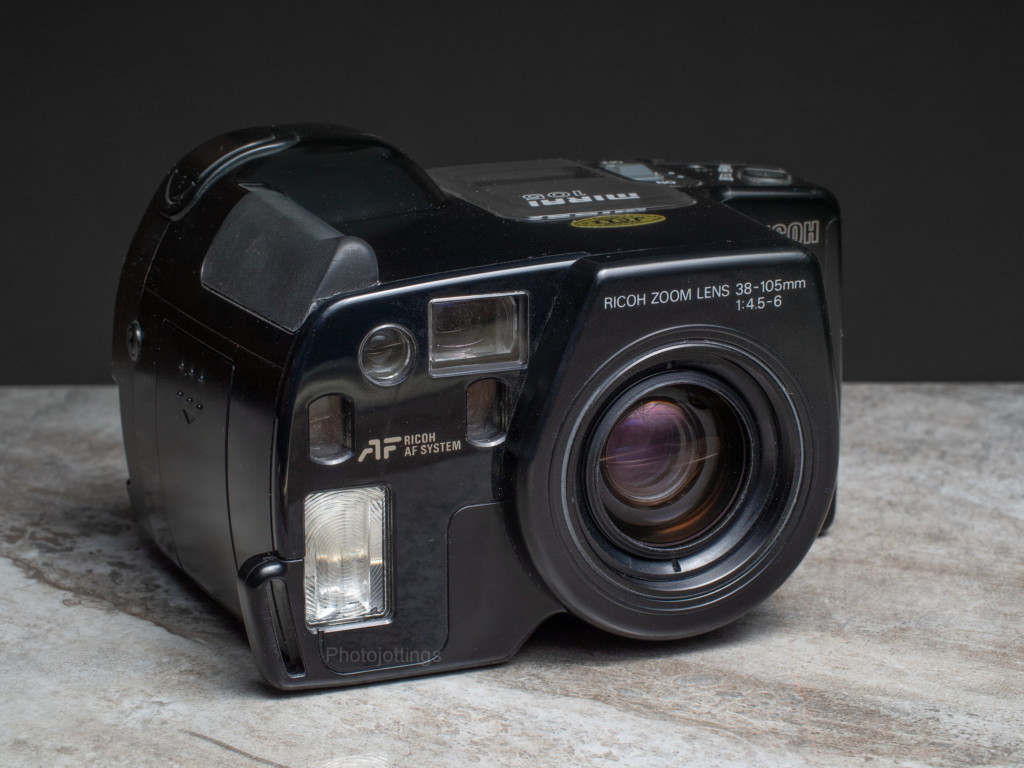 The front of the Mirai 105 with the lens cover off and ready to shoot.  The viewfinder window is the rectangular glass piece near the top.  Beside the viewfinder window is the circular AF illuminator, and the two rectangular openings with curved sides are distance measuring windows.  The flash strobe is in the vertical orientation on the Mirai 105.  The lens stays tucked in even when you turn the power on, and only starts to extend when you push the telephoto portion of the zoom button.  See the lens cap design in the very first picture at the top of the review.

In this view you can see the large handgrip on the right side of the camera, and the strap lug by the flash.  The lens accepts screw-in 40.5 filters, check prices here B&H, Amazon, eBay. 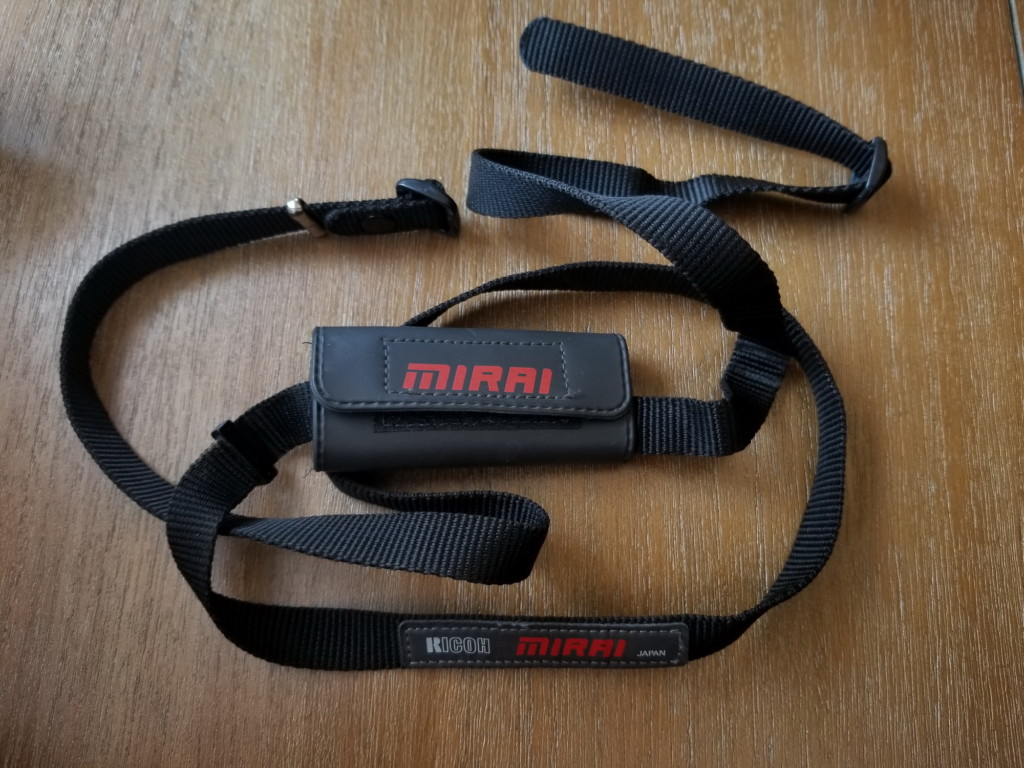 This strap came with the camera; I don’t know if it’s the same one that’s used on the more expensive ‘Mirai’ 35-135mm model, I’m guessing it is. 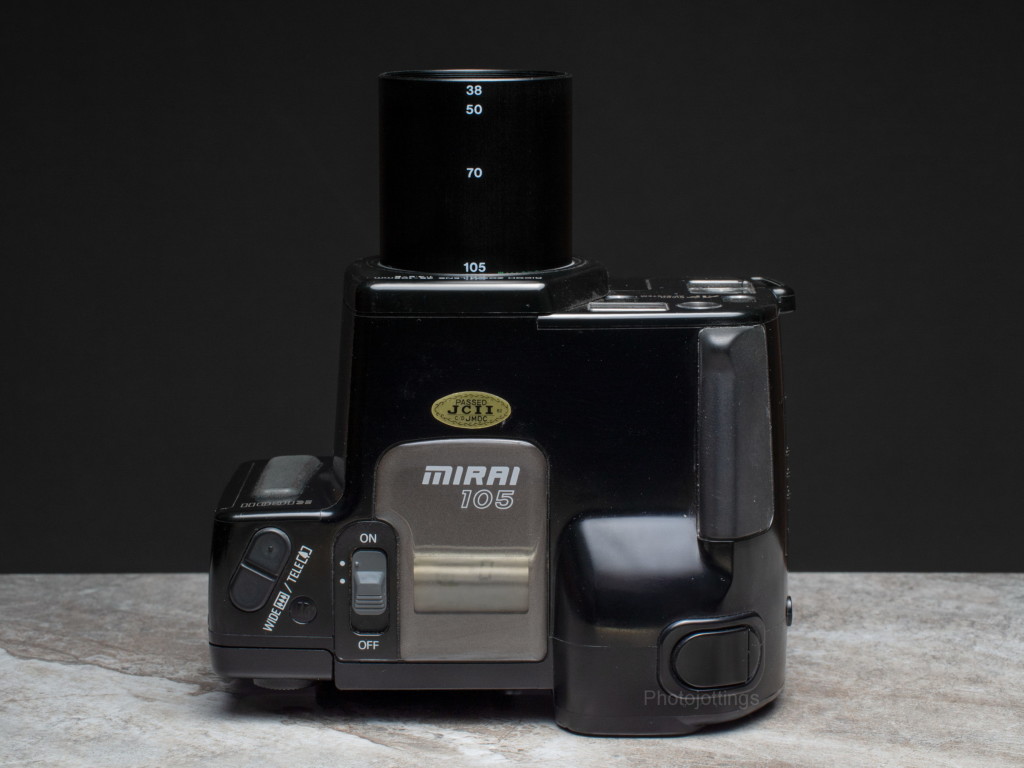 The lens is extended all the way out to 105mm, except in macro mode, see below.  The on/off switch is a slider by the LCD panel, and the shutter button is the oval to the right.  On top of the left handgrip is the zooming switch, you press and hold to select the required amount of zoom.  The decorative little round button by the  zoom switch has an ‘R’ in the middle, but it is not meant to be functional.

The 24mm x 13mm LCD panel is able to show quite a bit of information, but normally it simply displays a progressive type shot counter, and if film is loaded and winding correctly.  Other items that will show up are; battery condition for a couple of seconds after power on, macro mode, exposure compensation value, self timer, multi exposure, flash mode, continuous or single shot, etc.

When you select macro mode when the lens is already at 105mm, it will extend another couple of millimeters to a ‘Macro‘ line with a flower symbol.  The lens automatically extends to the macro mode position regardless of what focal length the lens is set at.  Another nice feature is that in this mode it compensates for parallax in the viewfinder by moving the autofocus frame marks to the correct position. 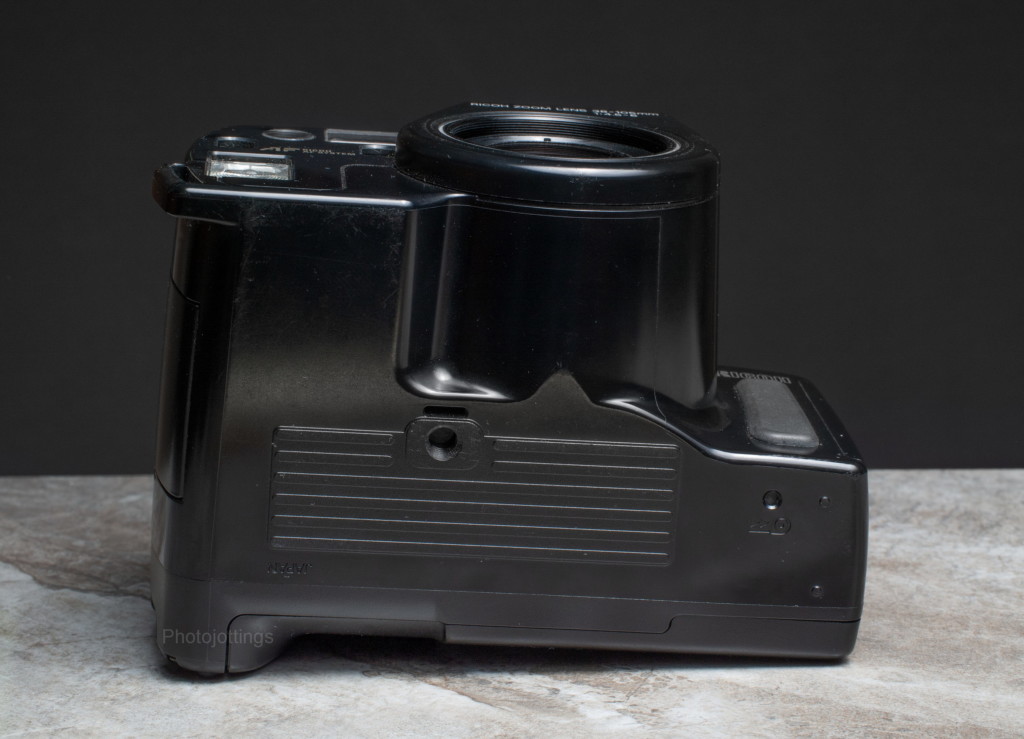 Not much to see on the bottom except the plastic ¼-20 tripod socket, and the manual rewind button on the right. 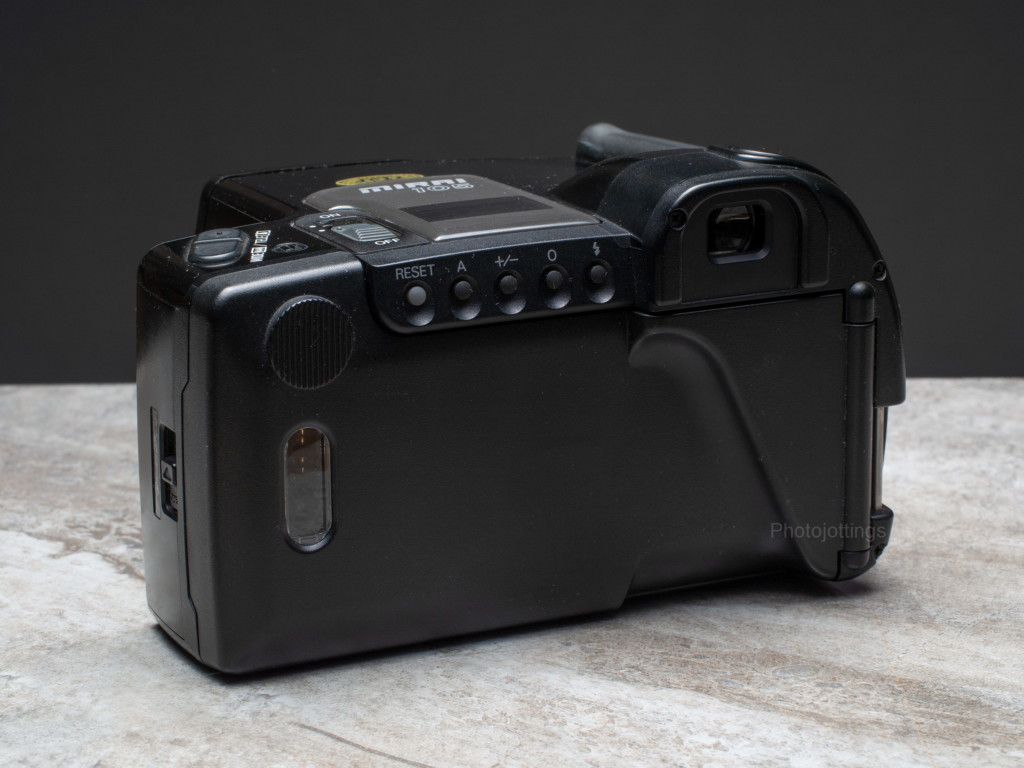 The back of the camera has a lot of buttons and a couple of other gizmos. For starters; the clear oval on the back door is a film reminder slot, and just above that is a thumb rest.  The viewfinder is off to the right, and is sufficiently bright, but has no guidelines; it shows 85% of the actual view, see window pictures below.  The viewfinder has a decent relief so eyeglass wearers will be happy, especially since it has no adjustable diopter correction.  Remember, this isn’t a SLR, so you don’t see the actual view, and everything will appear sharp, even if the camera is mis-focusing.

The row of buttons along the top are; the left is a ‘reset’ button, and resets the camera to the default shooting mode if you get flustered.

The second button marked ‘A’ is for ‘action’ and this will get you continuous shooting—1.3fps, self timer, and the ‘M.E.’ or multiple exposure mode.

The ‘O’ (Object) button has macro mode, a stupid auto zoom feature that attempts to re-frame the subject for you, and infinity focus (mountain symbol).

The far right button is used for setting the flash, as you press you’ll get: flash off, fill flash and no symbol which is auto flash mode. 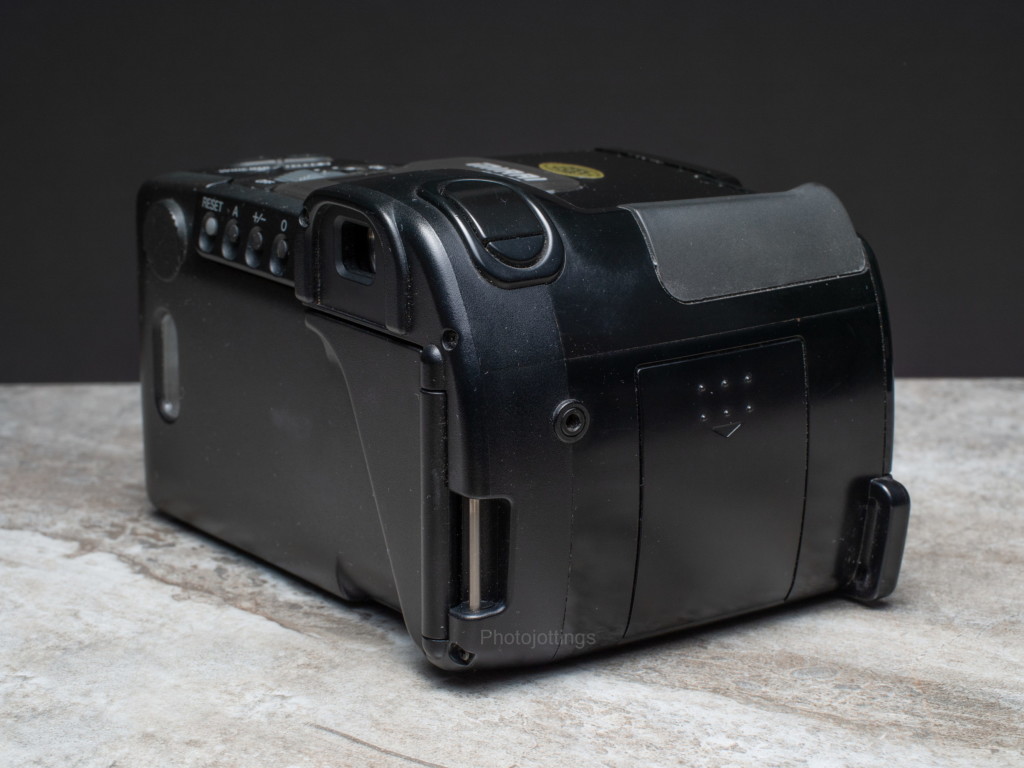 The right side of the camera shows the back strap lug, the battery compartment and the little round electronic cable release socket. 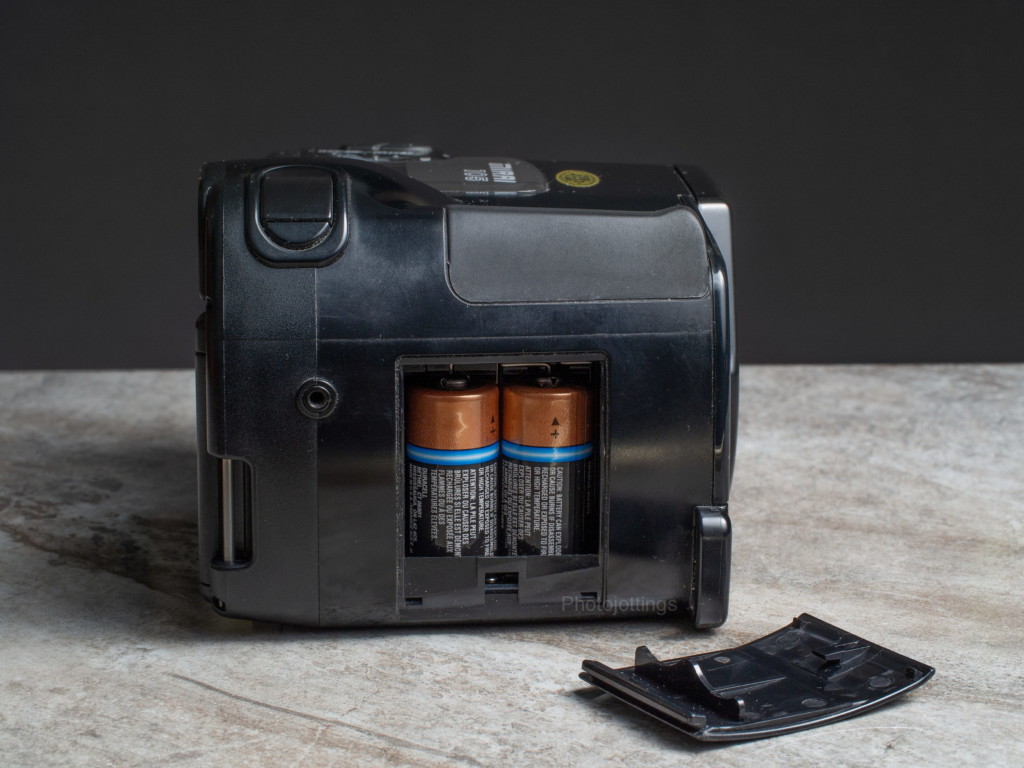 With the battery cover off, we can see the two CR123a batteries installed both with the positive (+) side up. 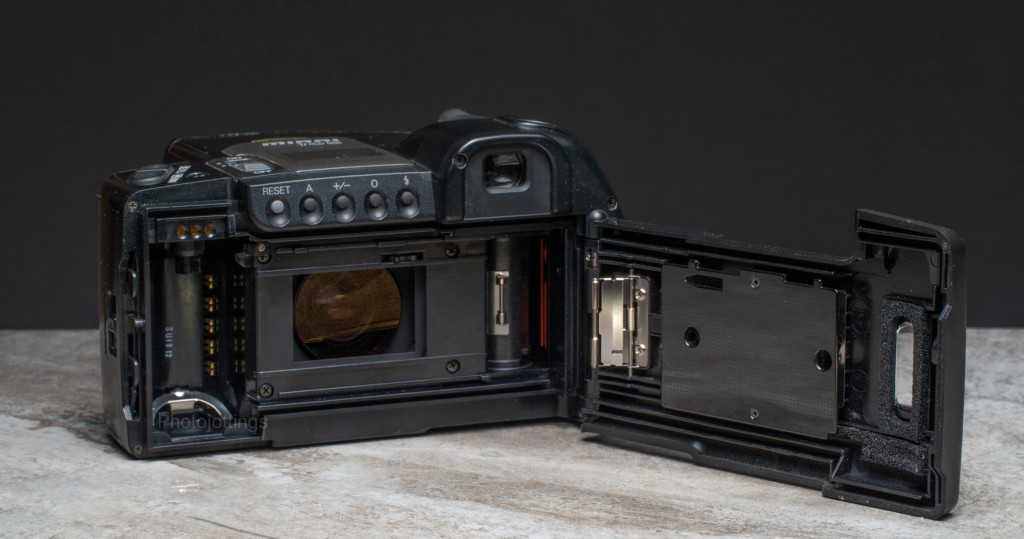 Nothing really special inside the camera.  Normal items are a spring steel film tensioner, and pressure plate.  Moltoprene is used around the film reminder slot, and a small strip at the end of the door.  The back cover can be taken off by sliding down the little screw on the top part of the hinge.  Not useful, but there are three contacts above the film compartment, but nothing on the door to make contact with; hmm…

Here are some boring test images scanned on a Nikon Super Coolscan 9000 ED.  All are 4000 pixels wide; there is no additional resolution from scanning at a higher sample rate.  Kodak Gold 200 used for all shots.  Click for larger images. 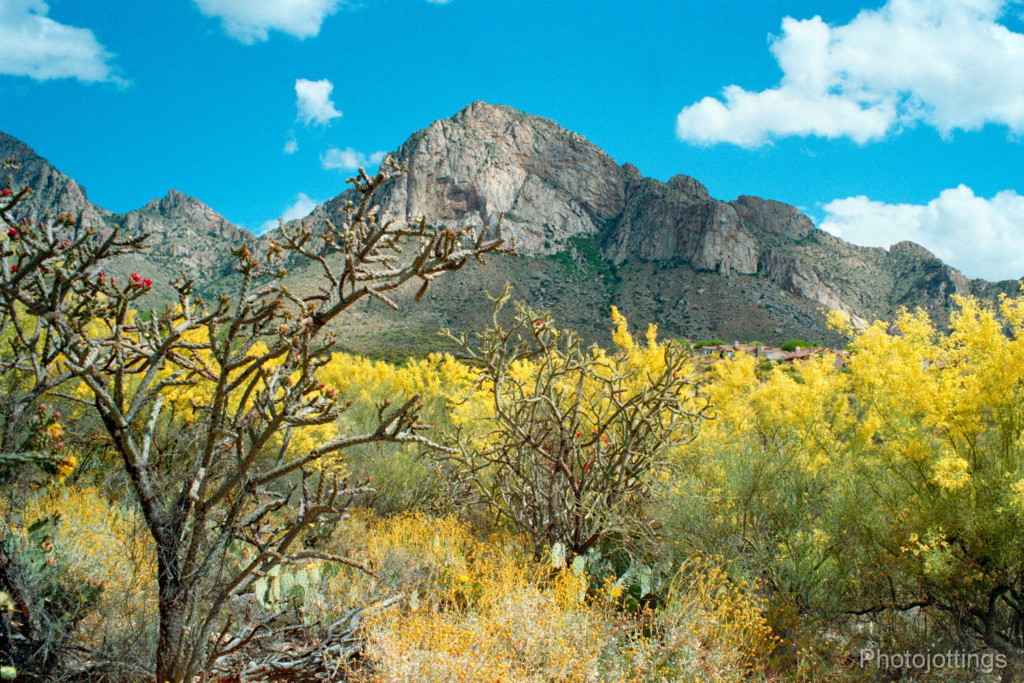 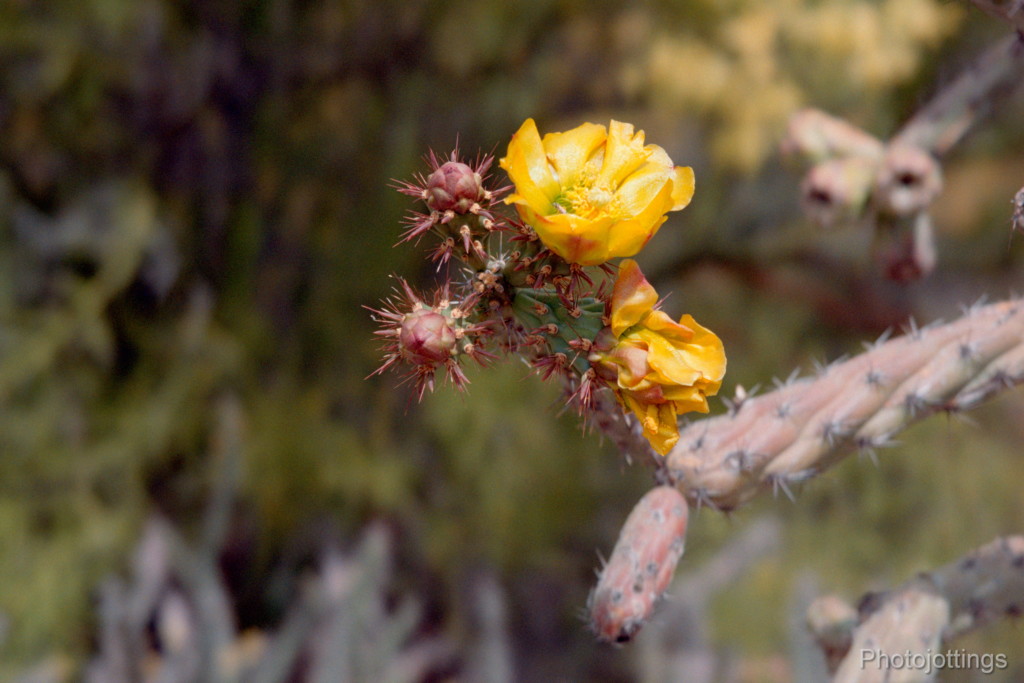 Close focus macro mode shot.  I was trying for the top flower, but it looks like it hit just below that.  The background blur is  pretty smooth. 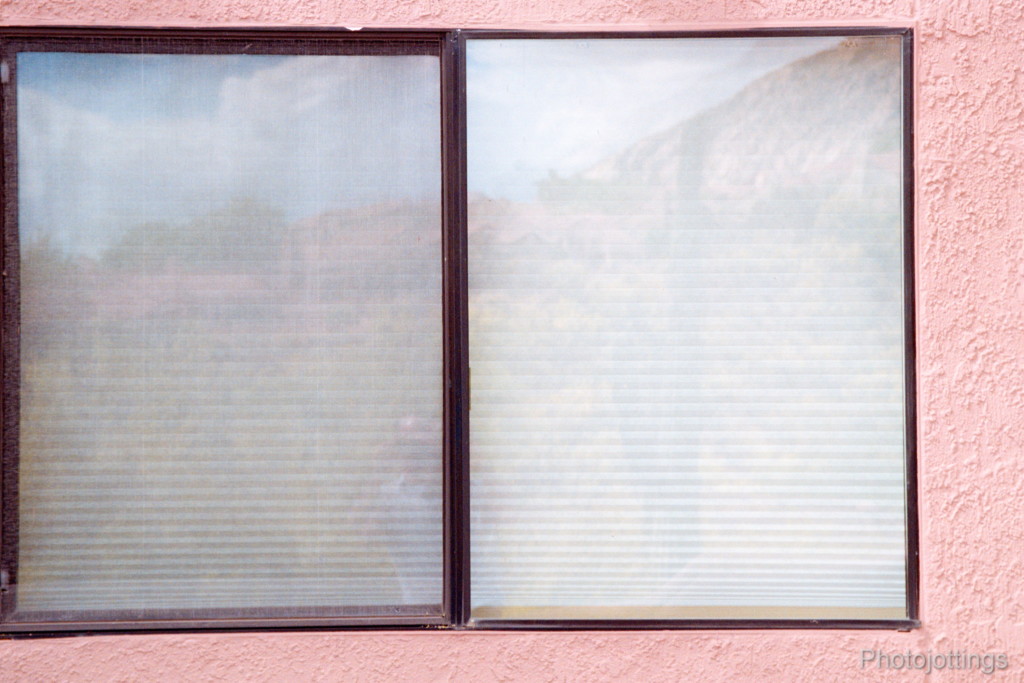 Pincushion distortion at 105mm along the window line is not very noticeable unless straight lines are near the edges like this.  This is the actual coverage you get when you compose exactly for the window frame as I did here; it looks like the viewfinder is off a bit at the telephoto end, or am I off? 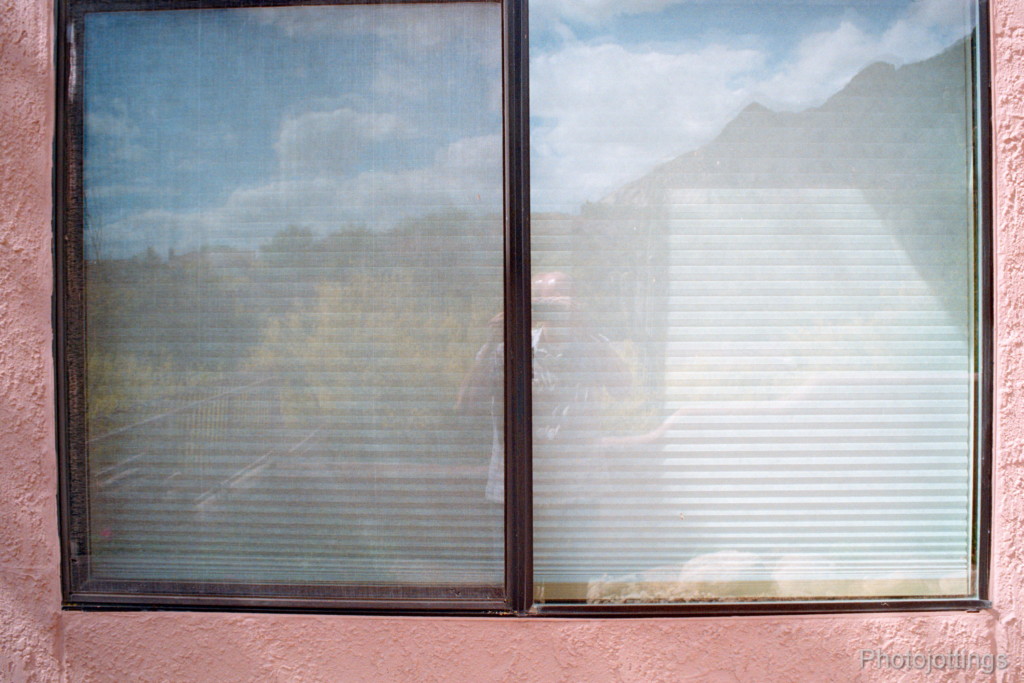 At 38mm, the distortion is slightly wavy barrel type, but not really noticeable in most shots.  As I said above, this is the coverage you get when you fill the window frame in the viewfinder. 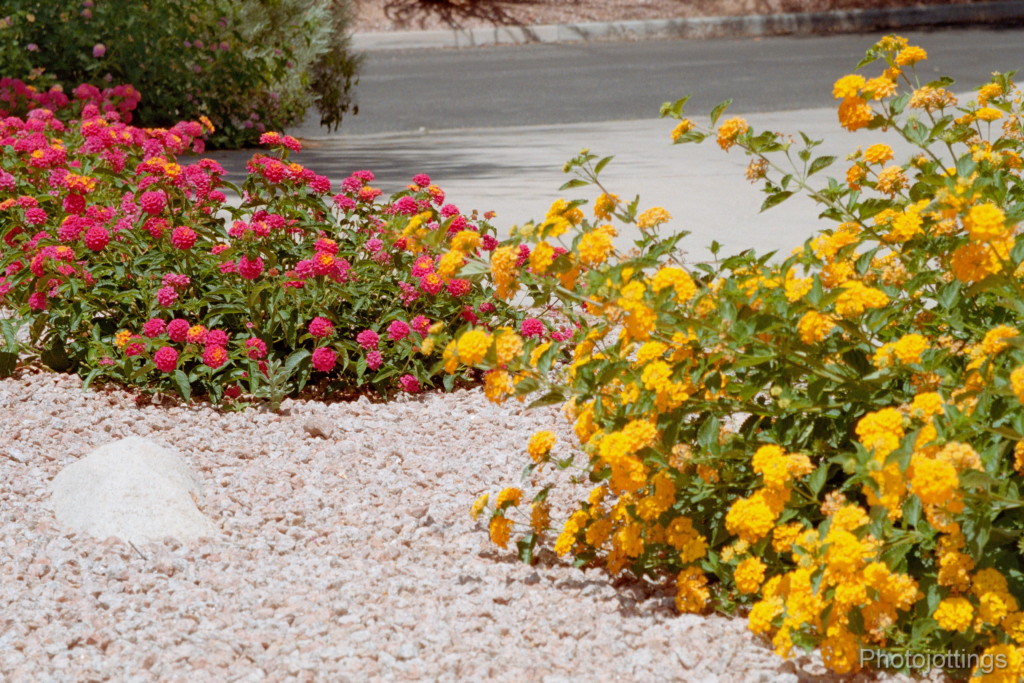 A 105mm shot, focused on the middle part of the image, or yellow flowers, but it hit the back red flowers instead. 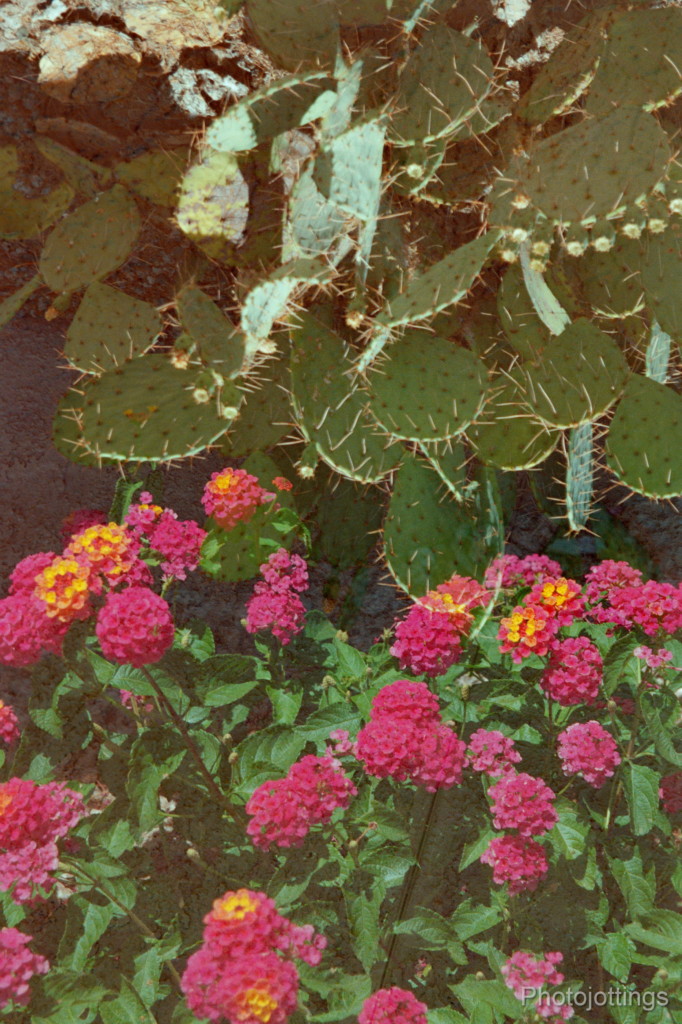 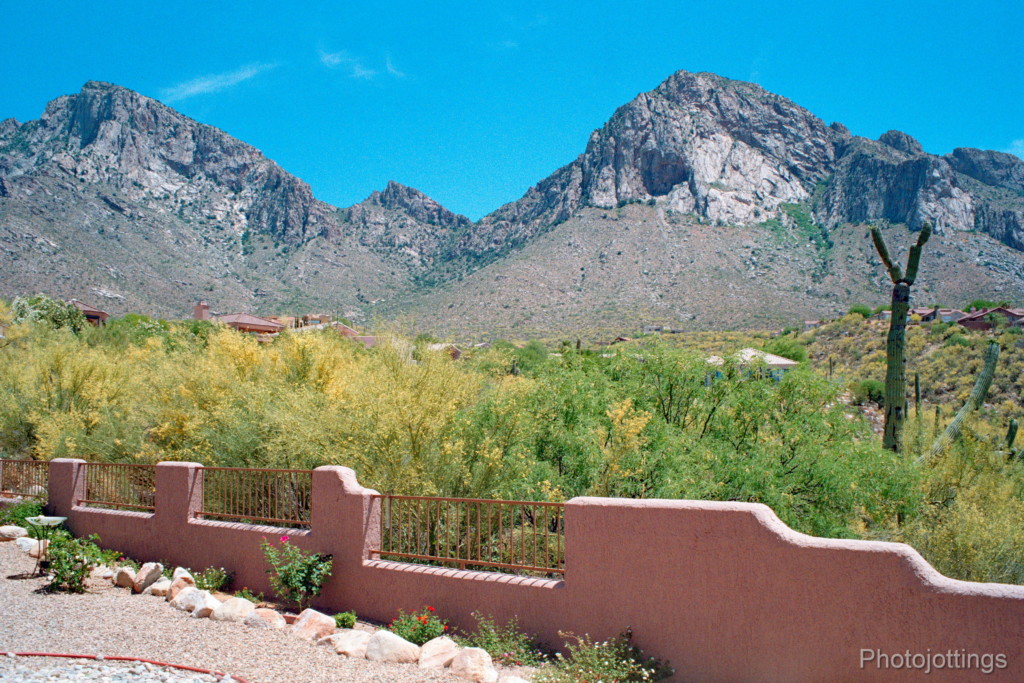 High noon Mountain scene at 38mm; and quite sharp, even along the sides. 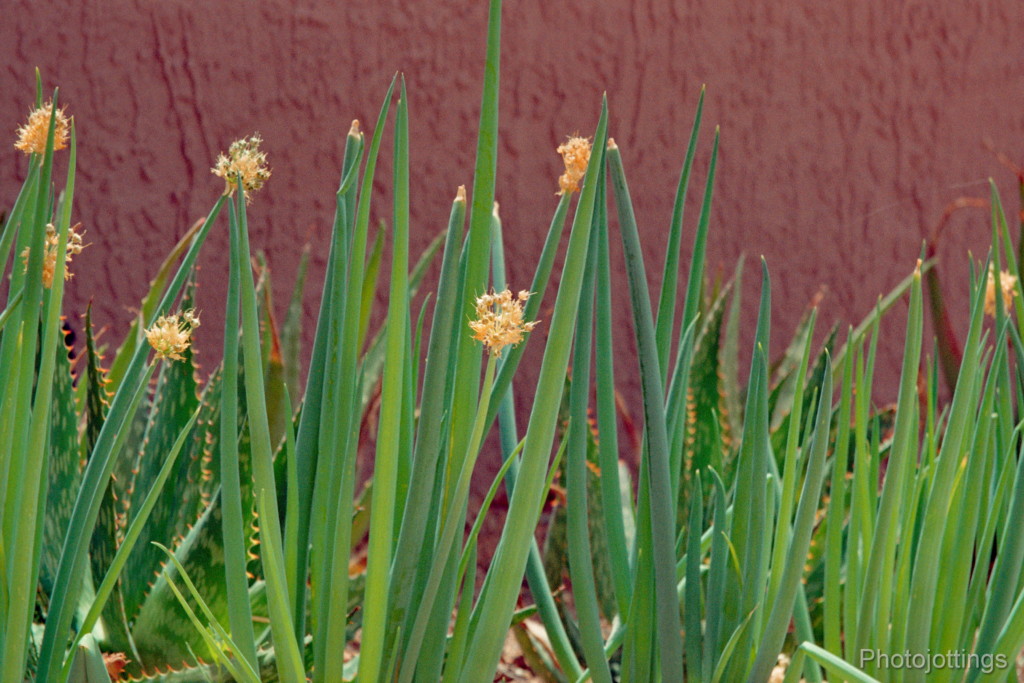 Close focus this time at 105mm, not in macro mode though.  I was almost too close to the aloe onions. 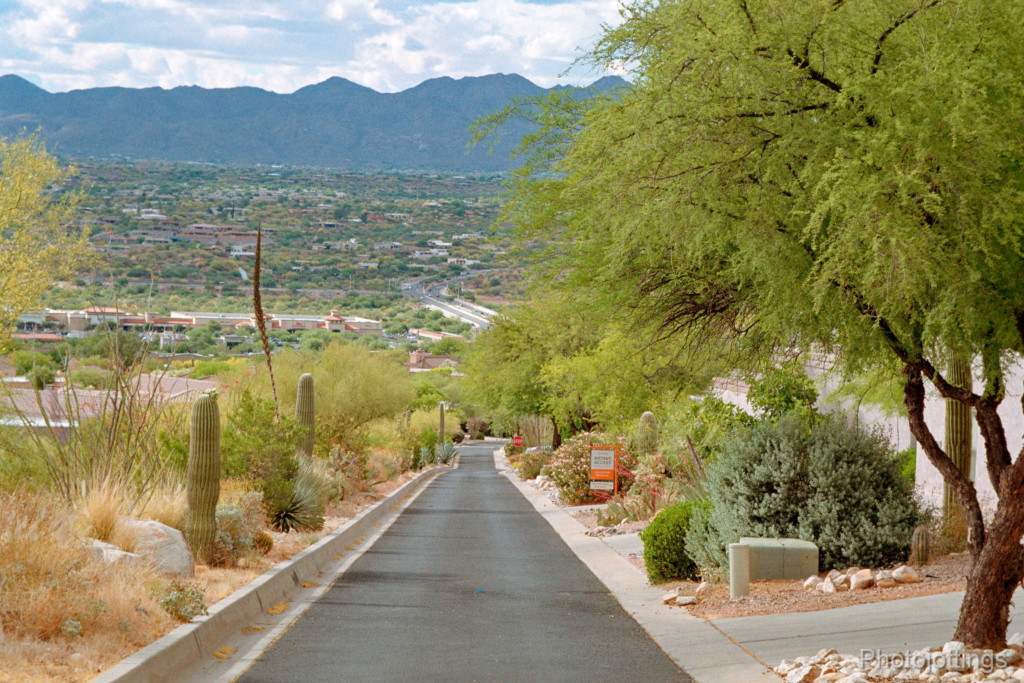 At 105mm, and I think it focused too closely, I should’ve used the infinity focus mode, or maybe not, I’m not sure…

The Ricoh Mirai 105 Zoom is definitely a crazy 80s camera, but it really works quite well, and has a better than average feature set.  I found the infinity focus mode was handy to ensure sharp shots of distant scenes, but I forgot about it more often than not.  Multiple exposure mode is fun to try out; that is if you’re in a creative mood, I guess I wasn’t for my one and only try.  Exposure compensation is always good to have available, and I usually set it for one stop over, or +1.0ev to make sure the shadows are decent, especially on color print film as I’ve used for the review.  Of course a built-in flash is handy for those outdoor people shots with the sun over their shoulders.

There are a couple of negatives for the camera of the future, the ‘Mirai.’  I thought it tended to focus slightly behind the subject at close distances, and sometimes it wouldn’t focus at all, but that’s probably normal for the 1980s, and crap, I even had a DSLR hang up on focusing quite often that was from the 2000s.  Also, the camera is slow to use; meaning it zooms slowly, focuses slowly, and it takes a little doing to make mode changes, so this isn’t a camera for fast action.

All said and done, the Ricoh Mirai 105 Zoom is pretty cool, and very useful if you aren’t in a big hurry to take your pictures.  The lens is surprisingly sharp at the wide end, and good at the long end.  The zoom range was useful back in the 80s, but now days 38mm seems too restrictive as people are used to their super wide angle cell phone images, including me.  Oh well, this camera is all about nostalgia, and it’s nice to take a trip down memory lane!