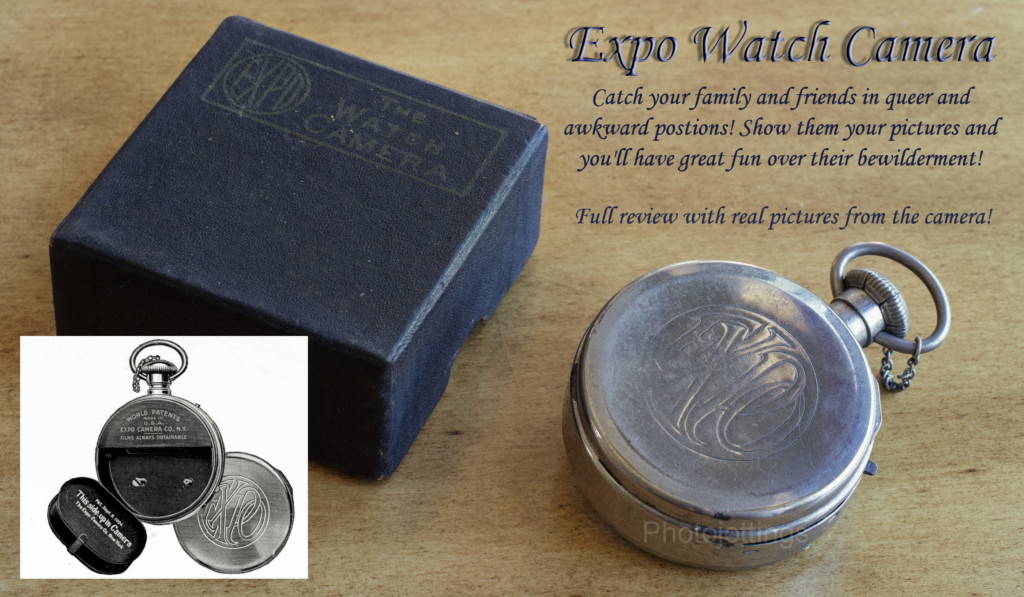 This week we check out a unique device for taking stealthy images; the Expo Watch Camera.  An October 1917 ad in a Popular Mechanics Magazine suggests you’ll get lots of fun taking pictures of your friends in an act of a ‘funny stunt.’  You’ll also have even more fun when you see the look of bewilderment on their faces when you show them the pictures you took.  I bet the ‘funny stunts’ back then were a little different than the ‘funny stunts’ that get pulled today.

The details concerning the manufacturing and marketing of the Expo Watch Camera are a bit cloudy when sourced online, but the Expo was probably first produced in 1905.  I did find a book from September 1905 called ‘Camera and Darkroom’ that made mention of the Expo, and said (not surprisingly as it probably took advertising from the company) that it produced ‘wonderfully good results’ from such a tiny instrument.  The last year of production appears to be 1939, although there isn’t much in the way of documentation for this.

Go here for what seems like a good source of information on the Expo Watch Camera, including pictures and info on the somewhat minor variations of the camera over the years it was sold.  Apparently, Expo Watch Cameras were also offered at one time in red, blue and black, and are extremely rare today.  There is another camera very similar to the Expo called the ‘Ticka,’ which was a licensed copy of the Expo that was produced by Houghtons Ltd, and sold throughout England.

Anyhow, it’s an interesting camera to play around with, and it would produce some decent images with fresh film on the original empty cassette, but good luck trying to respool it.  I tried cutting lengthwise 8×10 sheet film that I taped together, along with similar width 120 backing paper, then wrapping it around the wooden spools for a full roll of about 20 shots; unfortunately the sheet film it too thick, it wouldn’t stay rolled up; and it wound up being a total failure, oh well.  However, I did manage to take some decent images by cutting individual negatives from 8×10 sheet film, and taping them over the film gate.  The procedure involved opening the camera in the darkroom, taping the film to the gate, installing the cap and cover, then going outside and taking a picture.  After several attempts, I developed the film, and wound up with about three usable shots as seen below.  It was hard to compose as I don’t have a viewfinder with my camera, so I had to guess on the framing.

Well, that’s probably enough of the boring details, let’s do a quick walk-around of the Expo Watch Camera.

Original Price: camera only about $3 in 1916.  Current ebay prices are roughly $200-$500 for a good working model, and substantially more for one with all the accessories in the box.

Box contents; just the camera inside a cloth pouch, some included the external viewfinder, and instruction manual, and even a presentation case lined in fabric.

Date of manufacture; probable manufacturing dates ranging from around 1905 to 1939, but who knows really; patent date is sept 1904.  My Watch Camera is a ‘new’ model from the mid teens.

Prints; one accessory was a 2″x 3″ enlarger, and the pictures probably looked pretty good at that size.  Good film and proper technique today will make decent 3½ x 5″ prints.

Approximate resolution; , similar to a 0.3mp cheap digital camera from the late 1990s.

Shutter and speed; metal horizontal traversing slit type shutter, and one ‘instant’ speed of about -1/90s, along with ‘T’ time mode.

Features; Point and shoot only, no frills for this model.

Crippling features and omissions; none, it’s for snaps only. 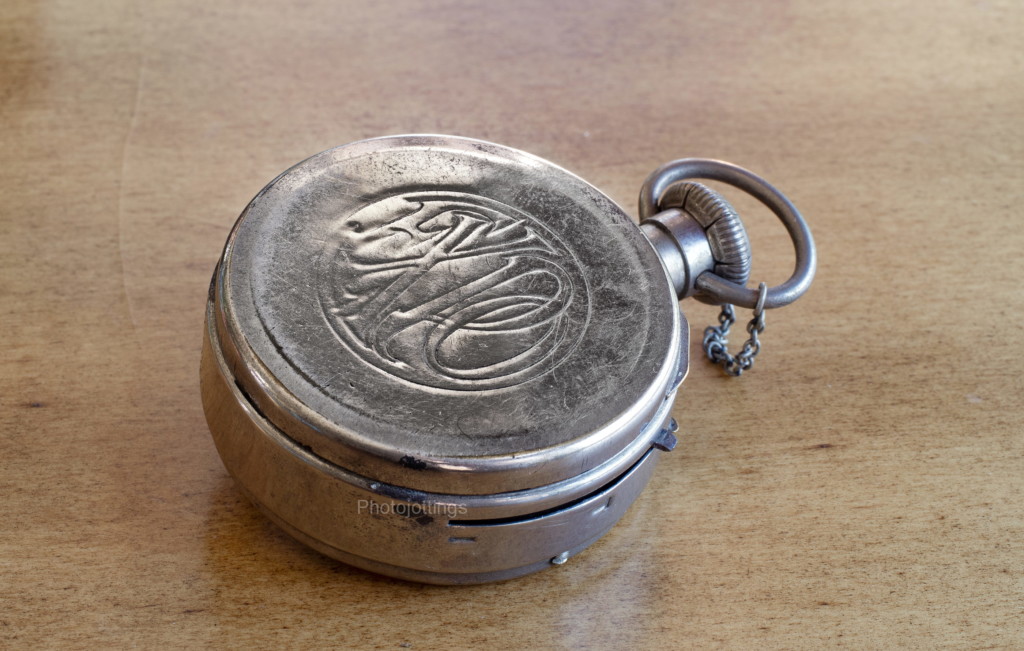 The front of the worn, and beat up Expo.  The cover is made of brass, and is full of wear marks and mild dents, but it’s still light tight.  The Expo Watch Camera actually does resemble a watch. 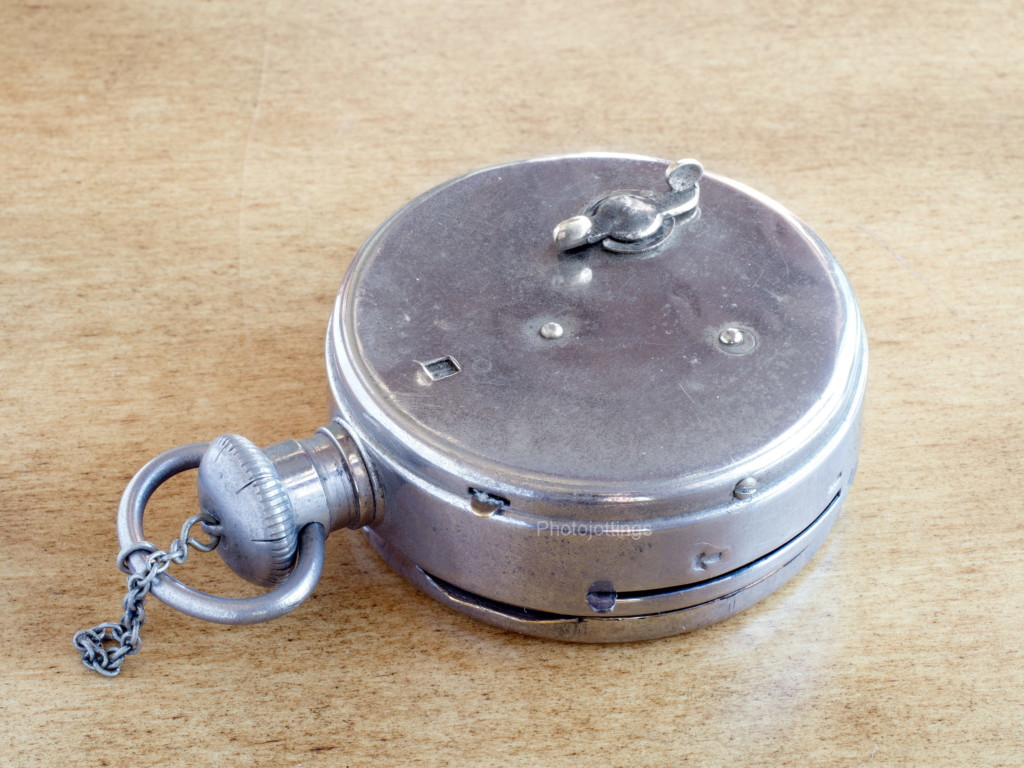 The back appears to be made of some sort of steel as there are a few small rust spots here and there.  In this view you can see the molded lip of the front cover sticking out, (at 7 o’clock) which helps with removal.  The lens cap has a chain attached to the ‘stem’ ring of the camera.  Don’t lose the lens cap, as the shutter opens momentarily upon cocking the camera, and will expose the film.  The lens cap is to be taken off as a last step just before you take a picture. 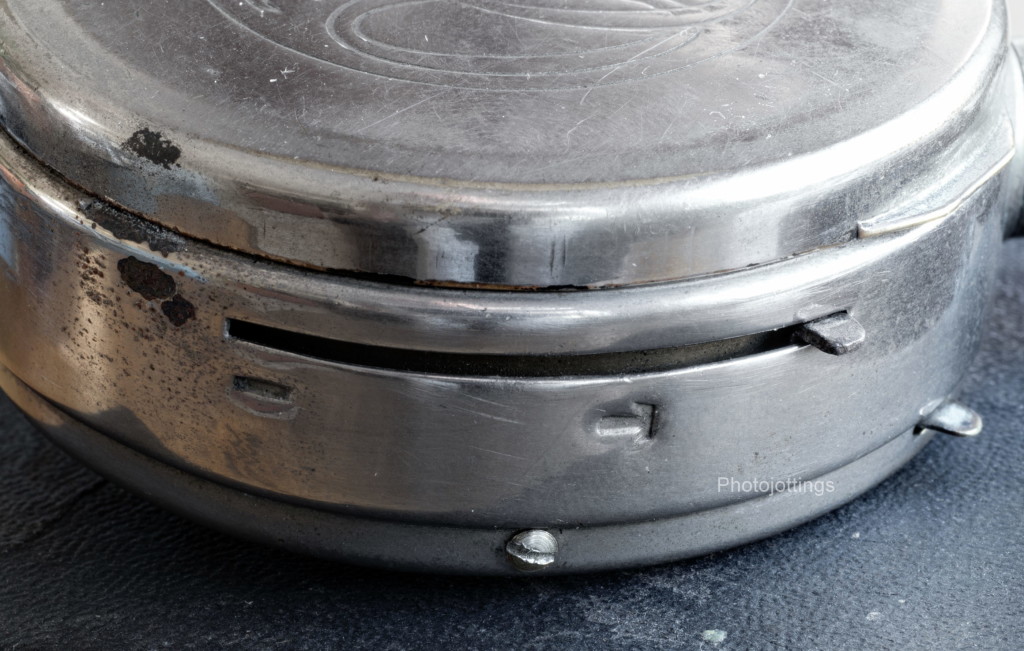 The cocking lever is shown here in the already fired position, (to the right).  The ‘T’ stamp in the middle is for ‘time.’  You pull the lever back to this spot until it stays put, then take the lens cap off for a long exposure.  After you’re done, push the cocking lever back to the position as seen above.  For ‘I’ or ‘instant’ pictures, you pull the lever all the way back until it stays, and press the tab shaped shutter button that’s located near the stem, and to the very right in the picture above.  The lever will trip and go all the way back to the rest, or ‘fired’ position.  Incidentally, I had trouble with getting my finger out of the way of the cocking lever as I held it, and a few shots were ruined because the lever didn’t fully release and seat, which over-exposed the shot, plus the camera jiggled a little bit while I moved my fingers out of the way. 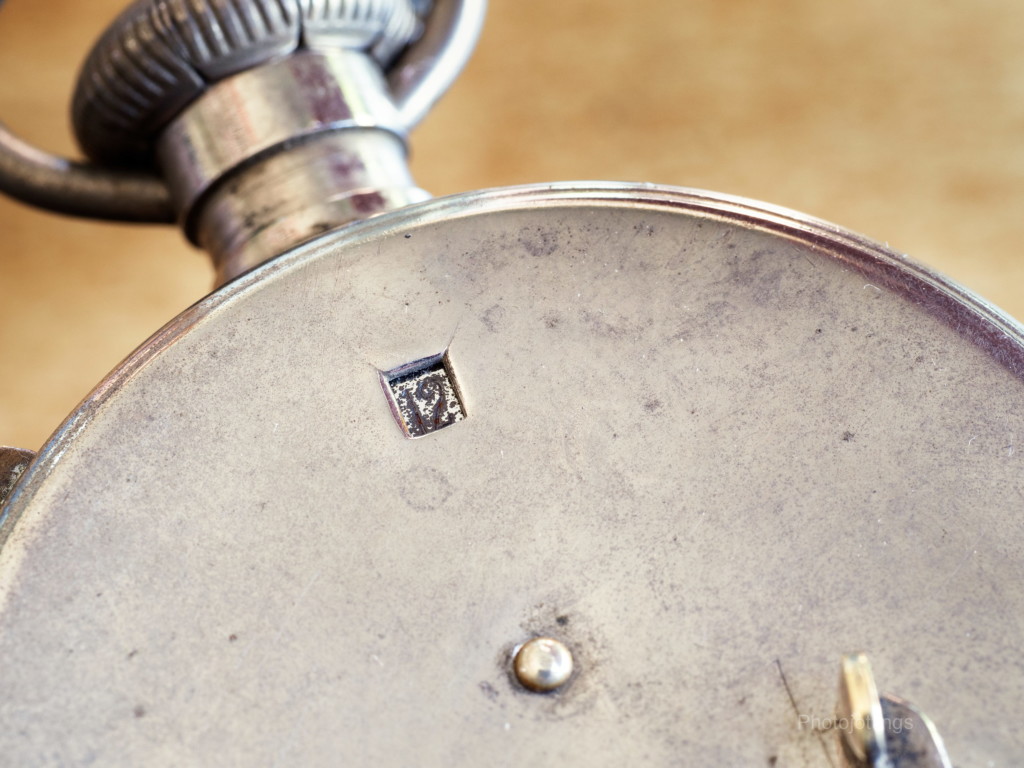 Inside the square is an exposure counter, here it’s at number 12.  On my model it goes up to 20, although I think some earlier models go to 25.  There were half rolls available at 10, and 12 shots.

With each half turn of the winder, a new frame is advanced, with the corresponding exposure number displayed in the square. 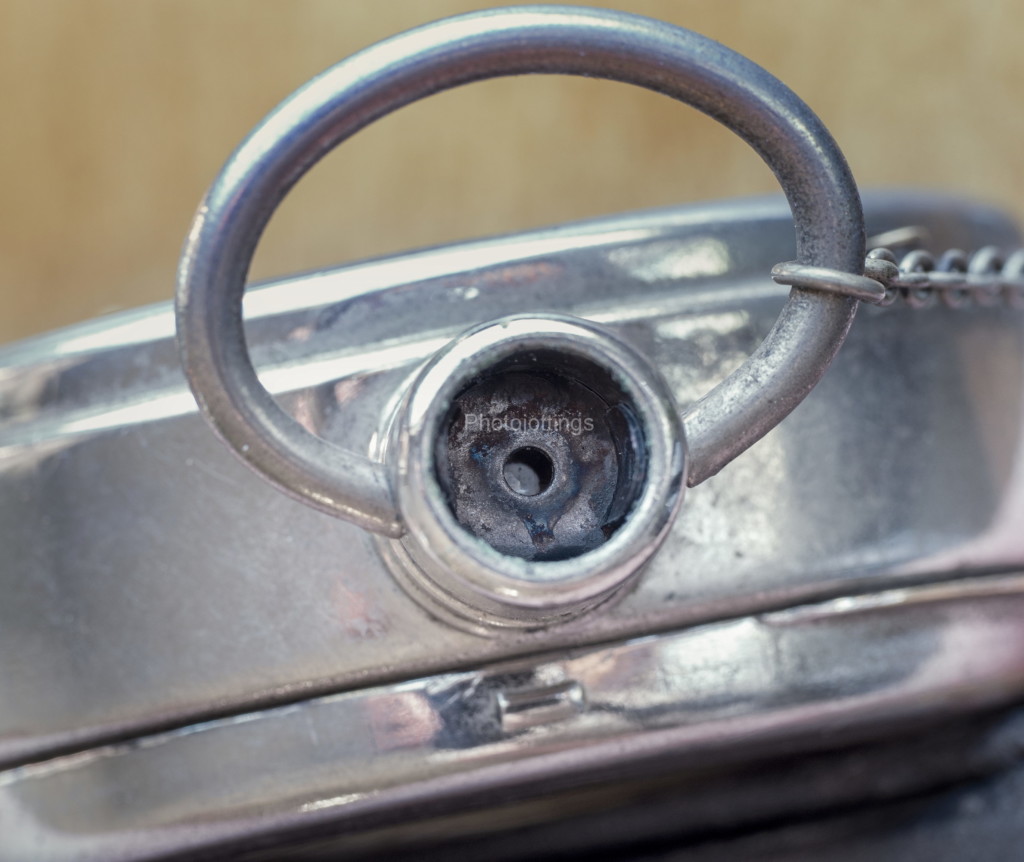 With the lens cap off you can see the front of the meniscus lens behind the drilled, non adjusting aperture.  I estimate it’s about F/13, with a 27mm focal length. 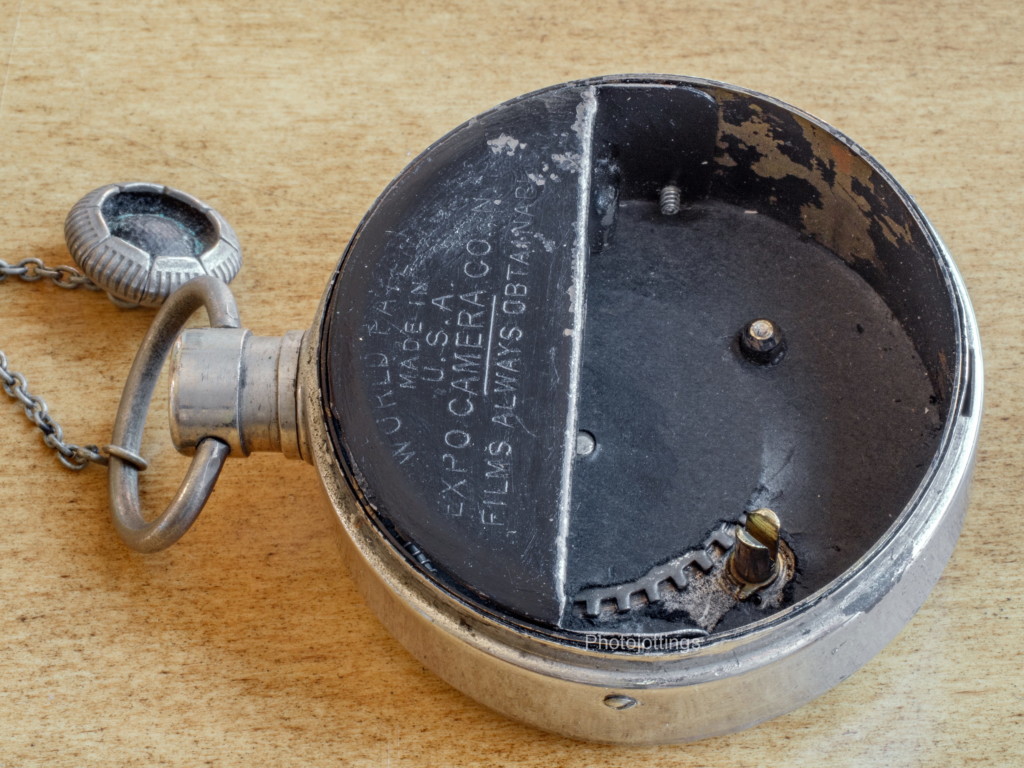 With the back cover off, the internals are revealed.  The large gear underneath the coated paper covering is for showing the exposure number as it revolves.  The brass fork is connected to the winder on the backside, and advances the film along with the large exposure number gear using the teeth at the base of the brass fork (at the 7 and 1 O’clock position–not visible here).  When the film is advanced properly, you hear a ‘tick’ sound that reminds you to stop winding. 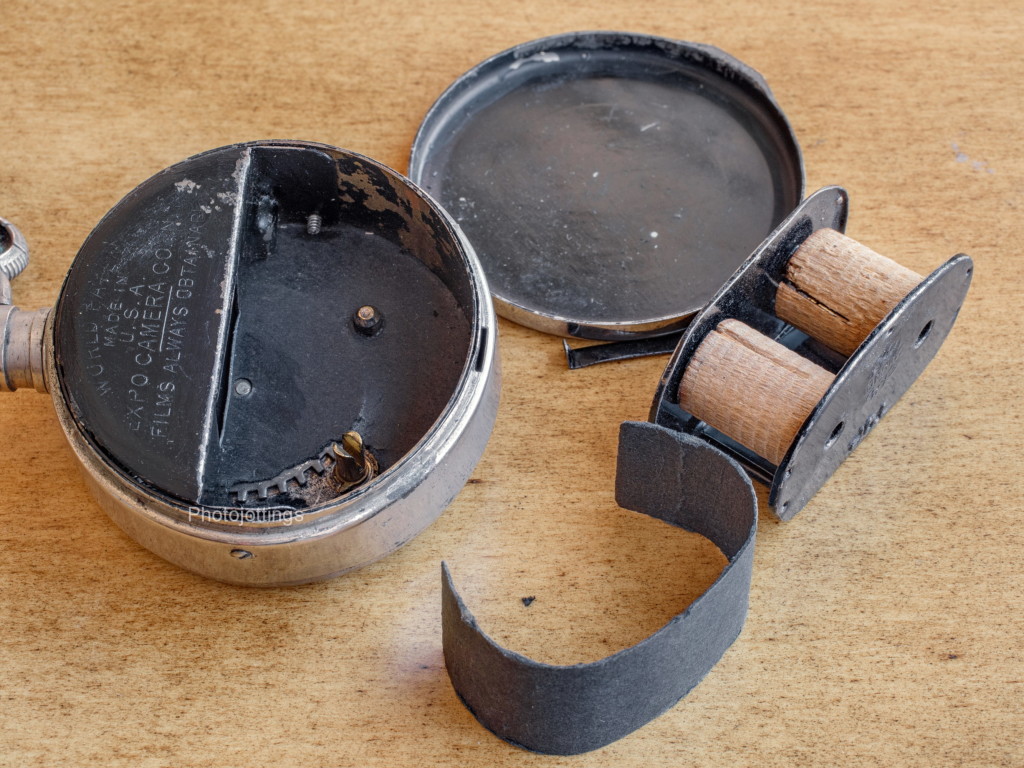 The film cartridge is made up of two wooden film spools, a metal holder, and construction type paper as a shield for the film.  The film had backing paper, so this was probably just for people that might load the camera in very bright light.   There are slits in the wooden spools for grabbing the film leader,  similar to 120 spools. 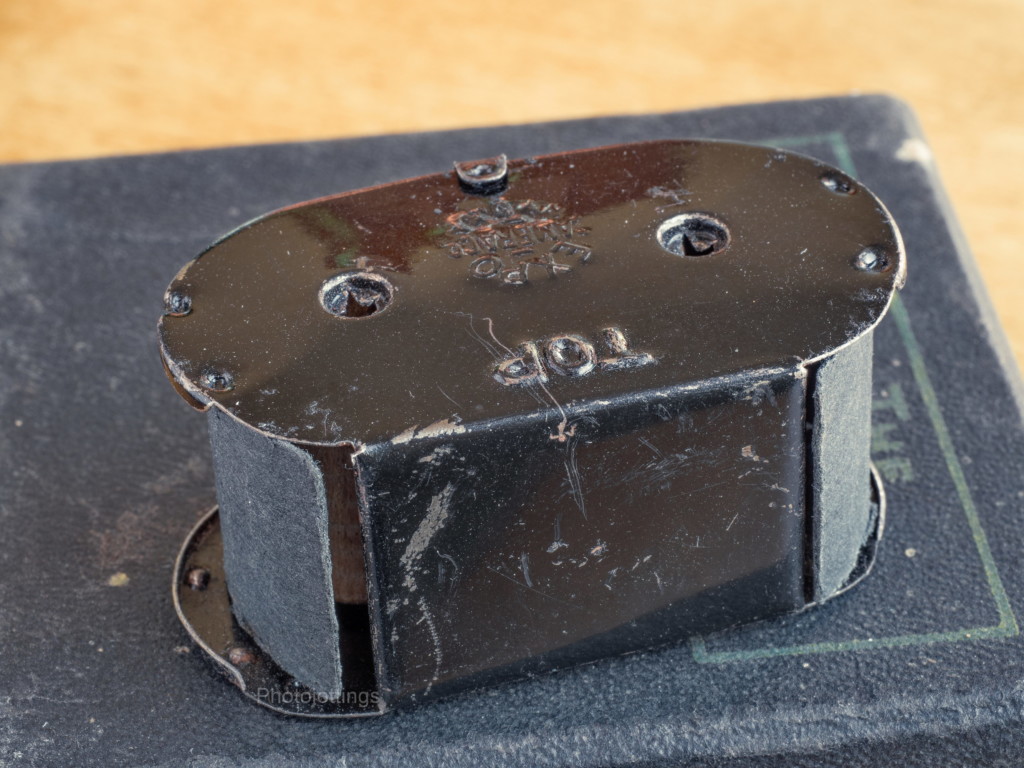 The film cartridge as you would have purchased it—except obviously it would have film in it.  The flat rectangular spot along the top edge acts as a mild ‘pressure plate’ to keep the film flat. 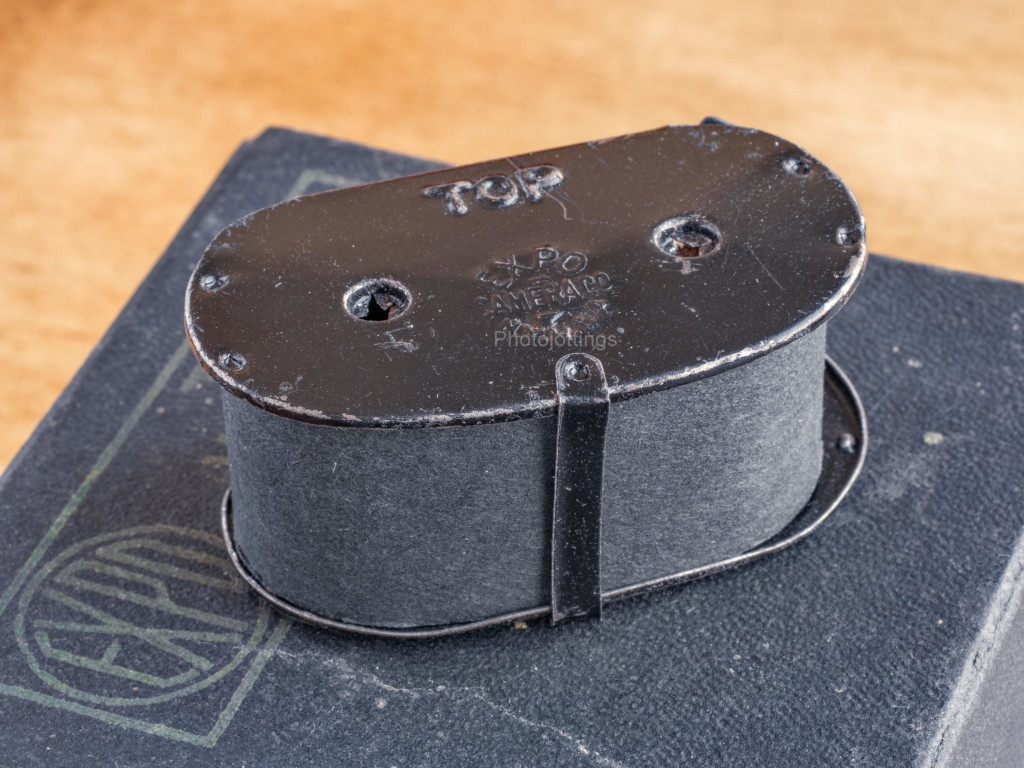 The film cartridge is held securely in the back with a steel strap that locks into the cartridge covers. 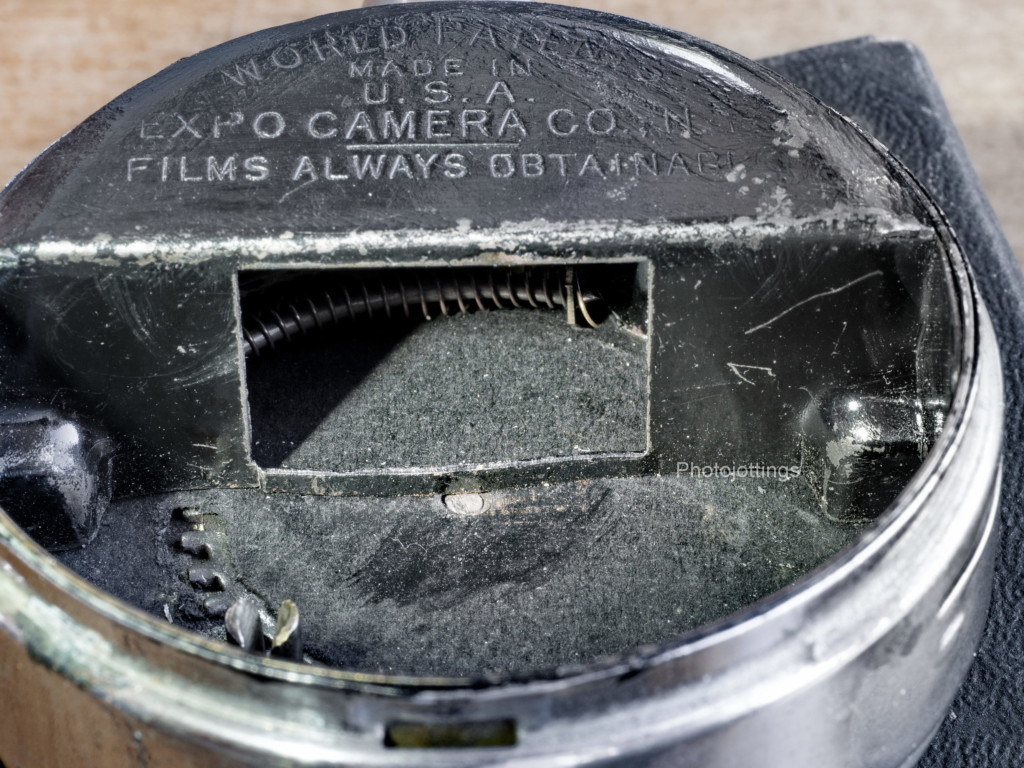 A look inside the film chamber.  The film ‘gate’ is 16mm x 22mm, or about the same size as an APS-C digital sensor.  You may be able to respool the cartridge with 110 film, but I didn’t try that. 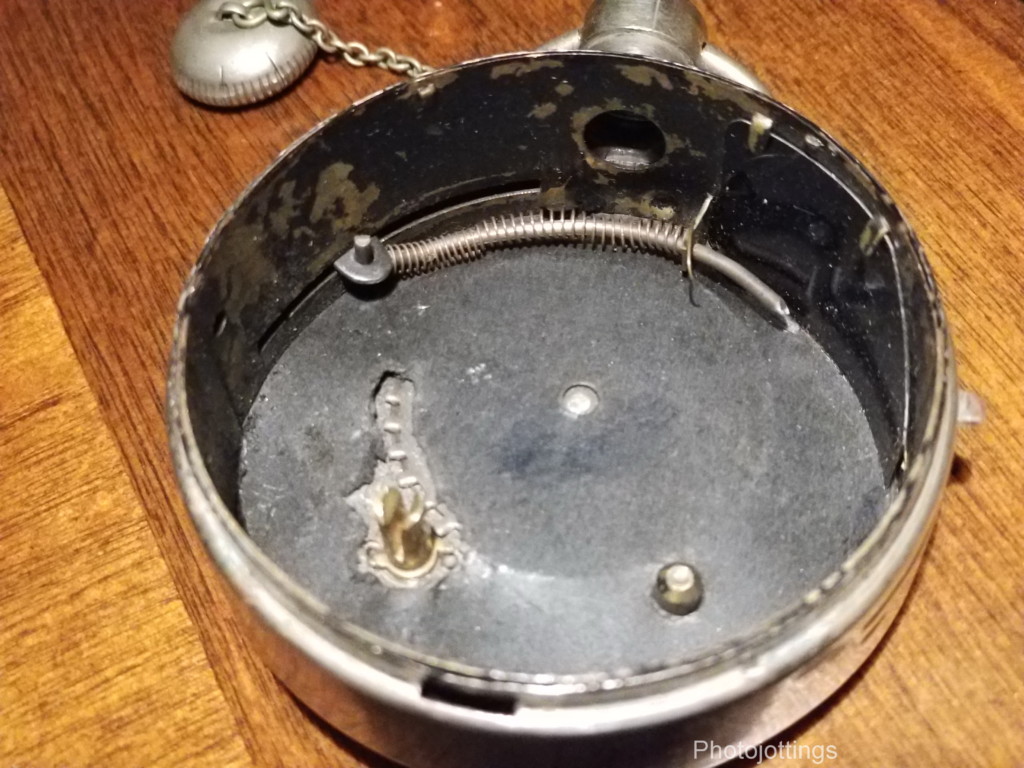 Bad cell phone shot showing what’s under the removable film ‘gate.’  The shutter spring, rod and slot are visible here, with the horizontally traversing shutter just behind the inner ring and lens hole.

Looking at the back of the uncoated 27mm±  glass meniscus lens.  The shutter is behind the brassing inner ring of the camera body. 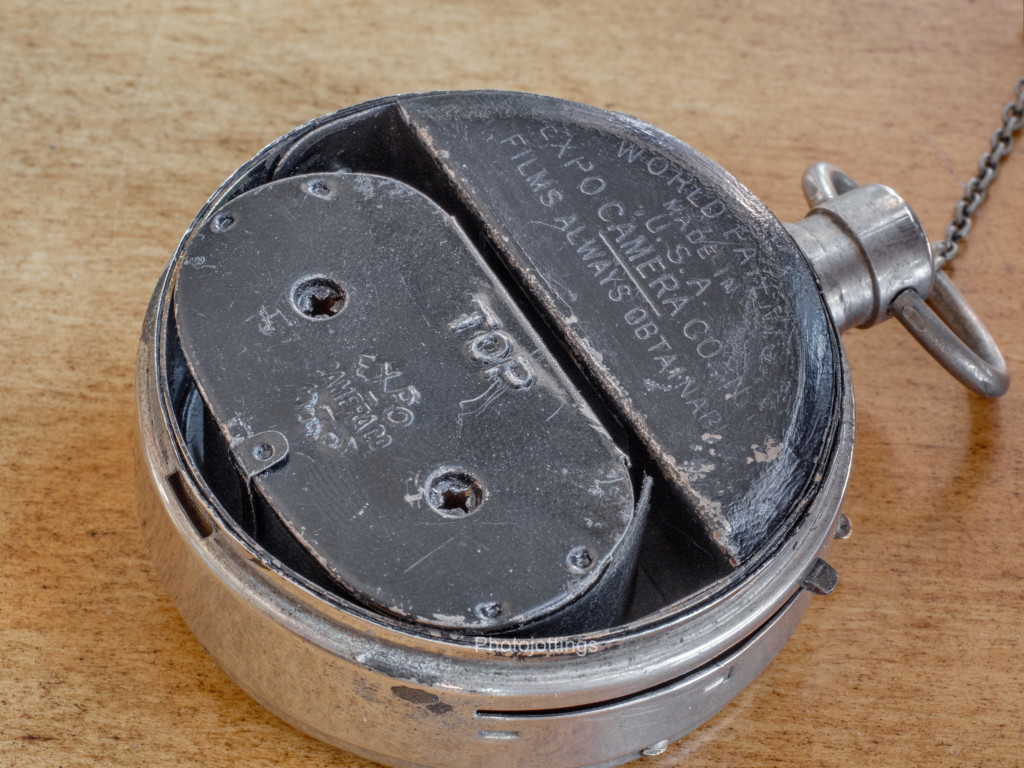 Here the film cartridge has been installed, and we’re almost ready to start taking pictures.  Notice the approximately 2mm gap between the film cartridge and film gate; I factored that gap in when figuring the focal length, but is this the way it came from the factory, or is it caused by fluctuations in tolerances when making the cartridges? 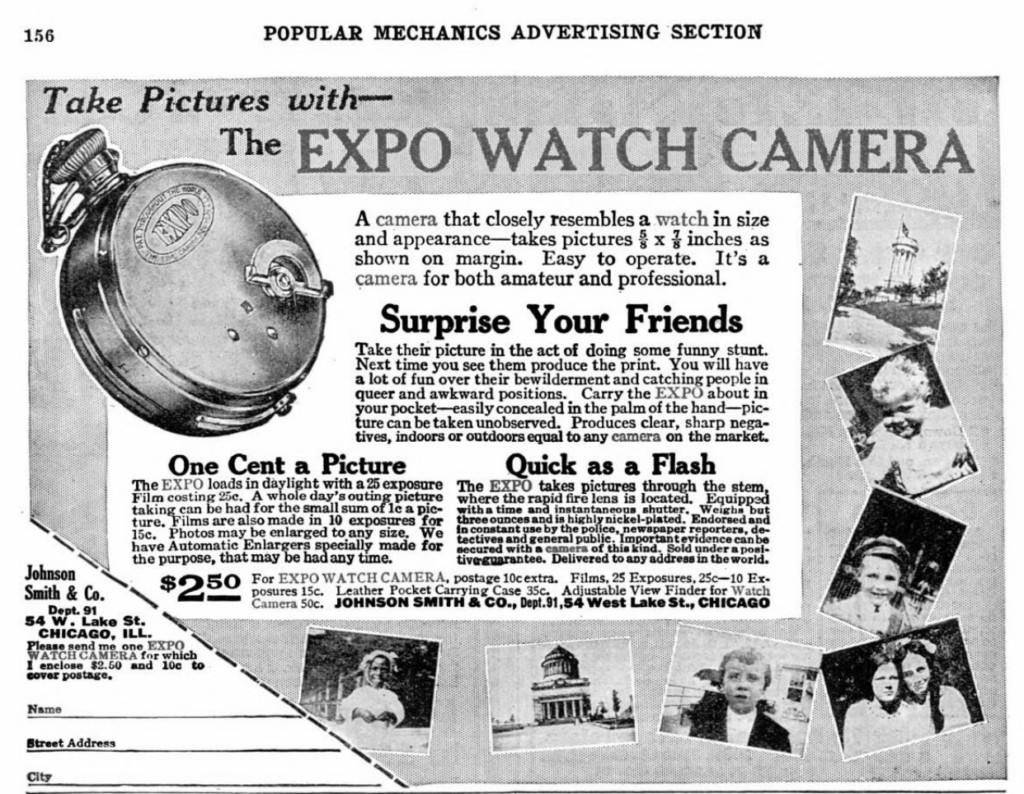 An ad from a 1917 Popular Mechanics Magazine showing an earlier version of the camera. 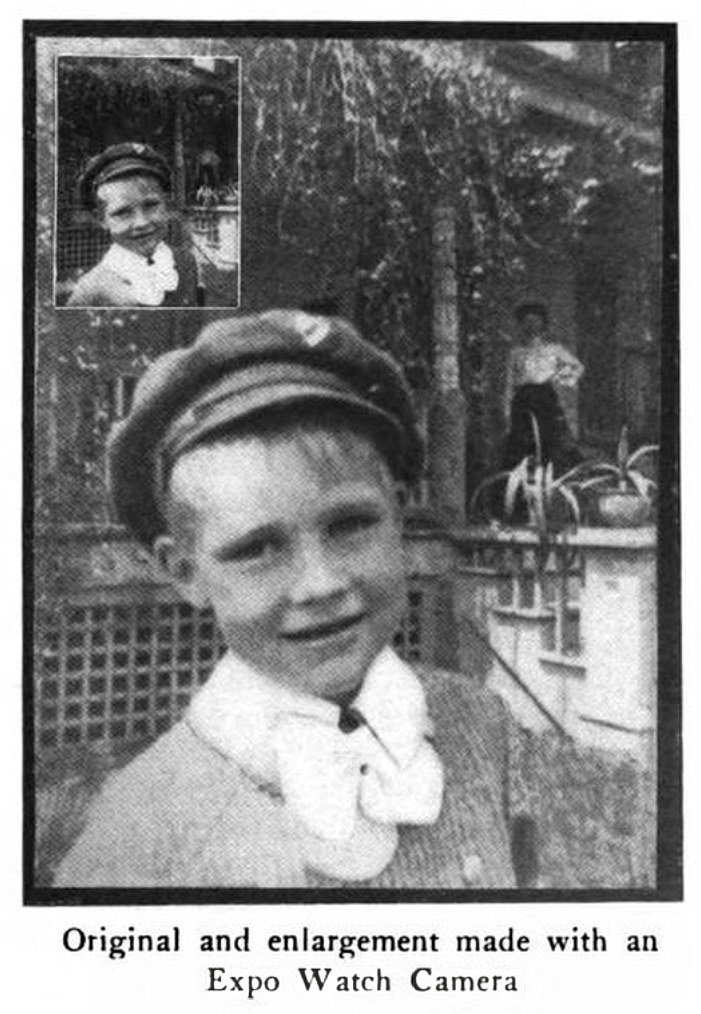 This photo sample was taken from a ‘Camera and Darkroom’ magazine, volume 8, January 1909.

Here are some samples taken with fresh film, Ilford Ortho Plus 80.  I cut this film from larger stock, and taped it along the film gate inside the camera. The pictures are around 1700 pixels long, so click for a larger version.  Scanned on a Nikon Super Coolscan 9000 ED. 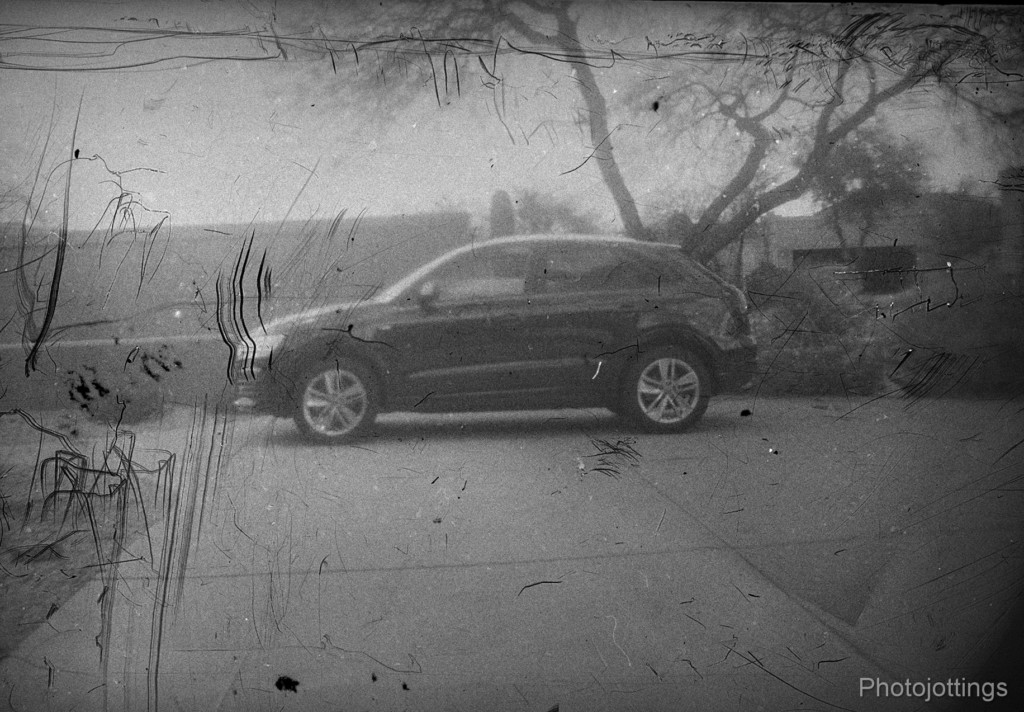 This was my first attempt at trying to fit and tape the negative along the film gate, and as you can see, the emulsion has been badly scratched; I had some problems with shifting it around and trying to get it flush. 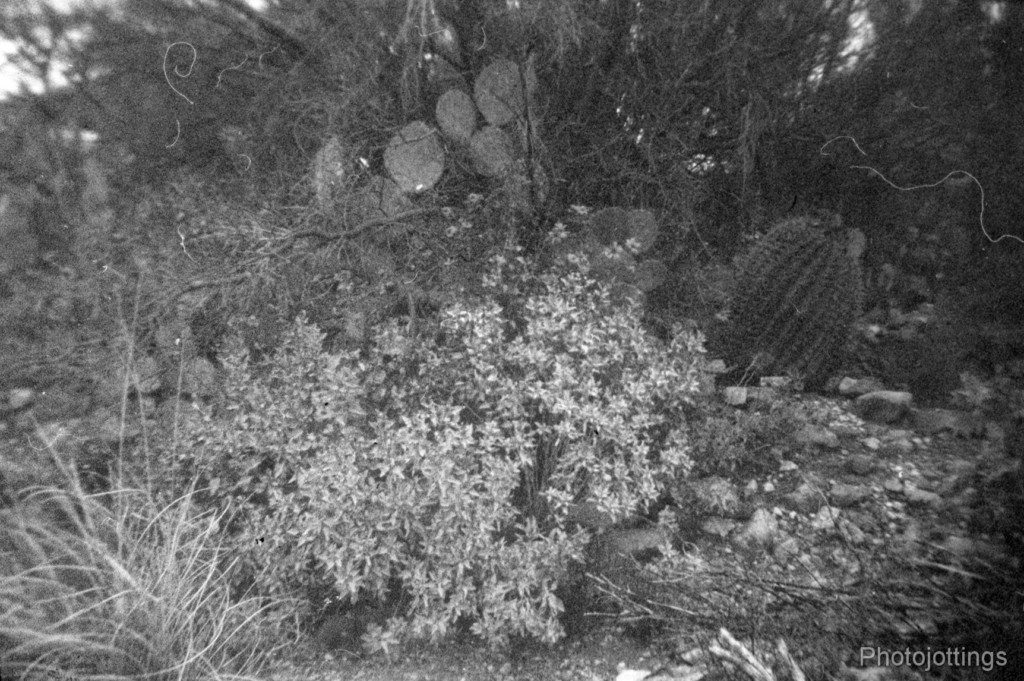 A better job here at film installation.  Desert brush at about 10′ (3m). 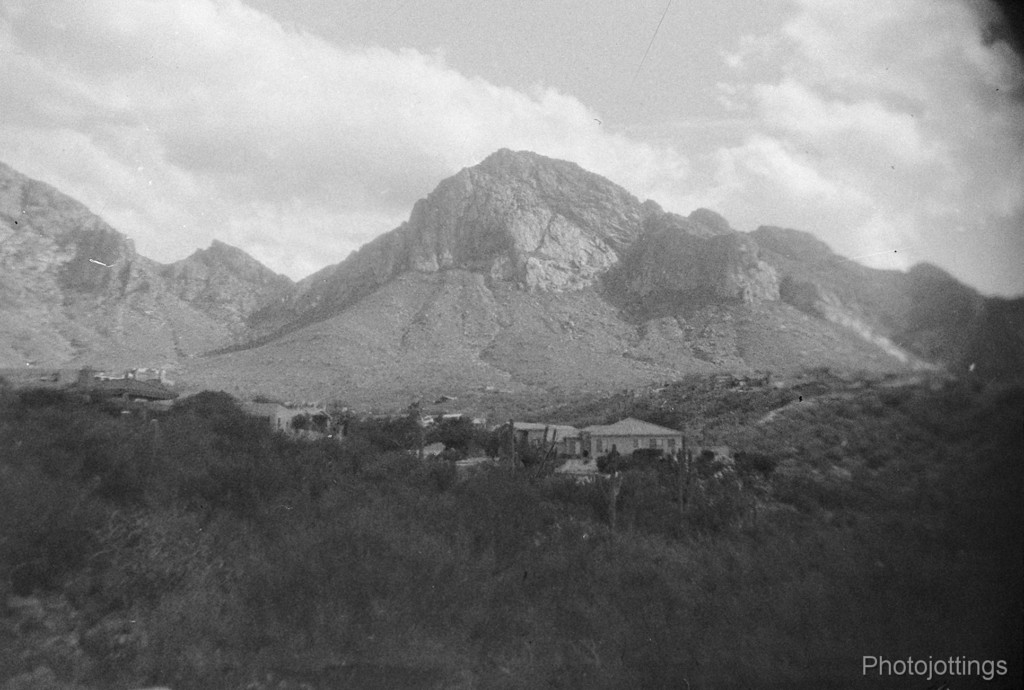 Our standard Mountain test scene using the instant shutter.  Wow, I actually kept the camera level for the shot, even without a viewfinder!  The right side of the image is quite soft, caused by my inability to get the film completely flat along the gate, and not by the lens design.  As a side note; normally when you use ortho film, the sky is white with no cloud definition, but the day I took these shots the clouds were mostly dark looking, and they showed up well here.

The Expo Watch Camera must’ve been pretty cool back in the day.  In fact, It’d be pretty cool even today if one could secure a few cases of fresh cartridge film.  I’m guessing ISO 800 speed B&W or color film would produce at least as much resolution as an instax mini print, so maybe there’s hope for that, but reality says…..No!  These little cameras are way too expensive and collectable for anyone to consider mass producing the film.  For what it’s worth, I think a person might be able to use 110 film for respooling; it has backing paper, and is about the same width; 16mm, so you should be able to get the same size negative, but without any margins on the upper and lower portions of the frame.

The Watch Camera was an enjoyable diversion from my more serious photographic undertakings.  I had fun taking a few pictures with it; not that I was hoping for new pocket camera to replace my Kodak, but mainly to see what kind of prints a person in the early 1900s would get using this type of toy camera.  I think the quality of the negatives would make some decent small prints, good enough for those queer and awkward moments as the ad suggests.

Anyhow, this neat little camera stays in my collection, and maybe I’ll try again at taking some shots and see if I can come up with something better than what I’ve shown so far.