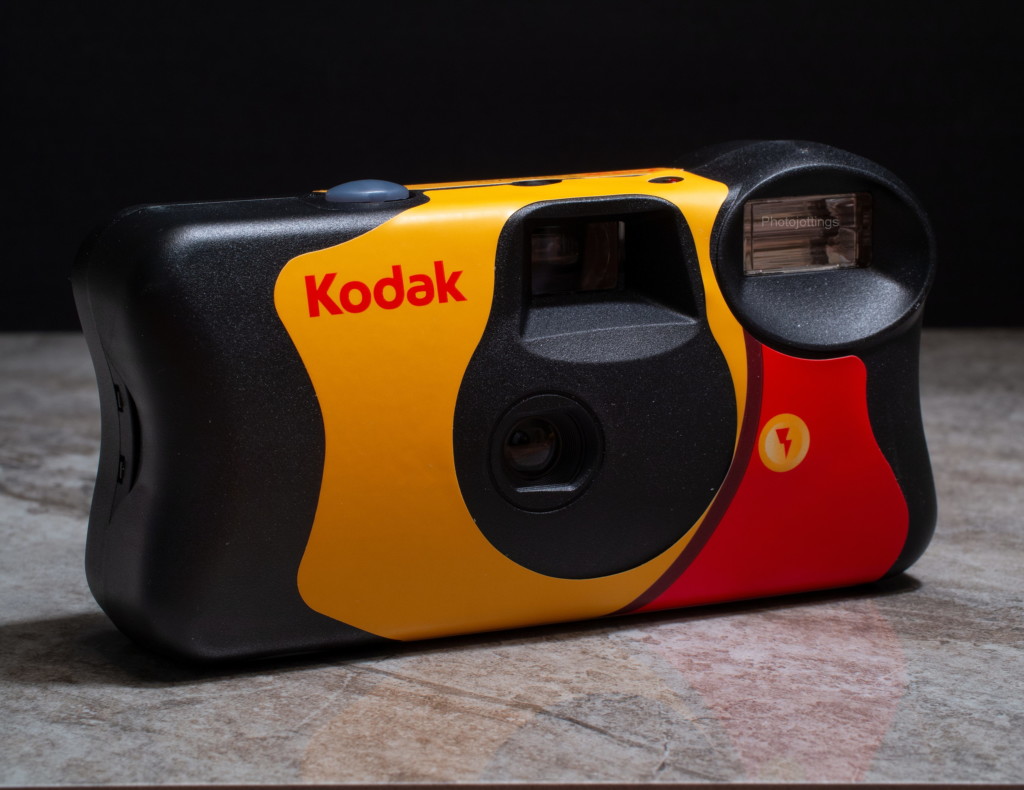 Note on this review: it reads very similar to the HD power flash because I used that review for much of the text as the cameras are nearly the same.

The Kodak FunSaver, B&H, Amazon, eBay, is a ‘single use,’ ‘throw-away’ or ‘disposable’ camera, whichever term you prefer.  Like nearly all single use cameras, it has a very simple plastic lens, manual film advance, and 27 exposures. This model comes with a flash, and apparently replaced the Kodak HD Power Flash model a few years ago, so I’m updating Kodak’s primary single use camera.

The film is already loaded, all you do is advance the film via thumb wheel until it won’t turn anymore, then simple look through the viewfinder and take a snap. If you want to use the flash, just push the button on the front of the camera until the red dot on the top turns red, which means the flash is ready.

These little cameras are popular at weddings where the guests are encouraged to pick them up and start shooting, especially after the liquor starts to flow, then turn them in to the hosts before going home so the newlywed couple can get them developed and have some laughs later on.

Film type and exposures: I think Kodak uses 24 exposure 800 ‘max’ type, which is no longer available as a stand alone film, however, when loading in a darkroom as they do when making the camera yields 27 images.  You can get 27 images on any roll of 24 as long as you can load the camera yourself in the dark and do not have to advance it to the first shot mark; however, with motorized auto loading cameras, you probably won’t get any more than 25.

Shutter speed: my test device measured the shutter speed at about 1/90s.

Aperture: I’m guessing the aperture is near F/9.5-10 as it is on other similar cameras.

Lens and focal length: approximately 31mm, plastic single meniscus type projecting an image onto curved film—via a curved film gate.  Color and contrast are actually quite good considering how tiny and cheap the lens is.

Camera made in China, film in USA.

Batteries: one Chinese SafeEnergy Alkaline AA battery installed.  This battery will last a lot longer than the camera, even if you use the flash on all 27 pictures.  I take these out before putting the camera in the recycle bin because they still have a lot of use left in them; this one still had 1.6 volts on the test meter (fully charged)after about a dozen flashes.

Viewfinder: bright and easy to see through.

Enough of the intro, let’s check out some product shots of the Kodak FunSaver Single Use Camera. 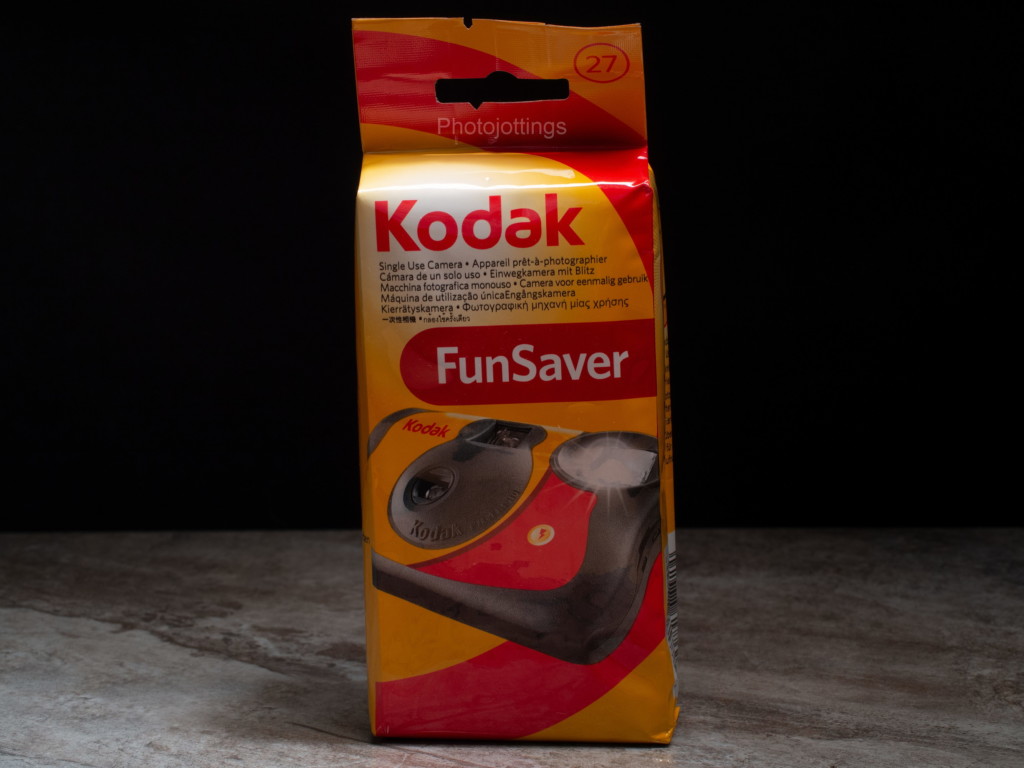 The ‘FunSaver’ as seen on the shelf.

Packaging includes a cardboard sleeve that fits over the camera, which goes inside the sealed wrapper. 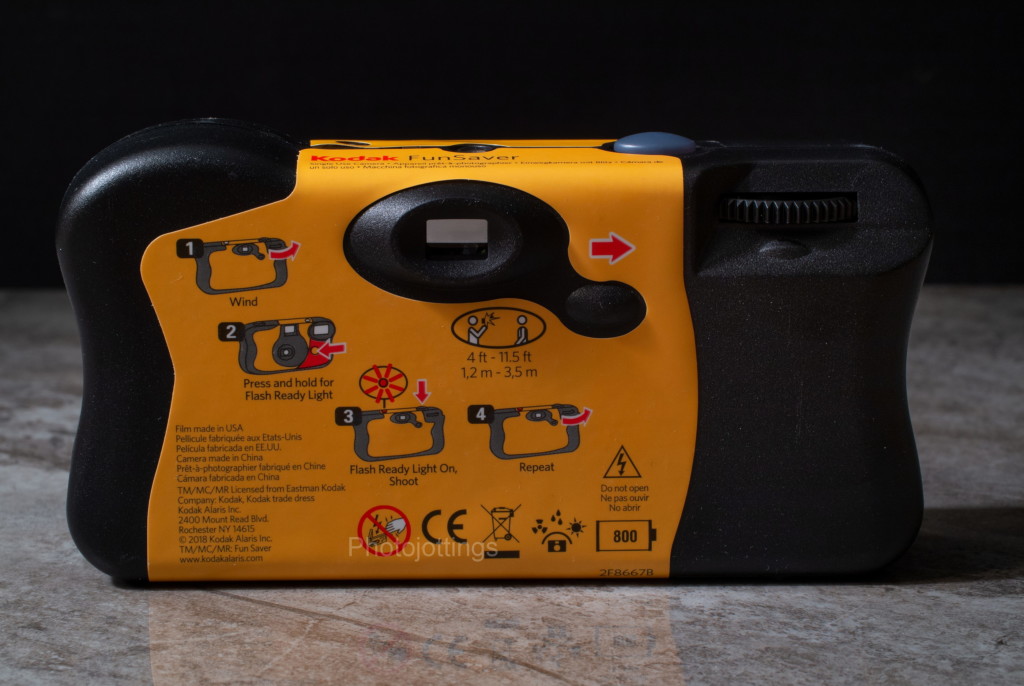 The sticker on the back of the camera shows you how to use it. 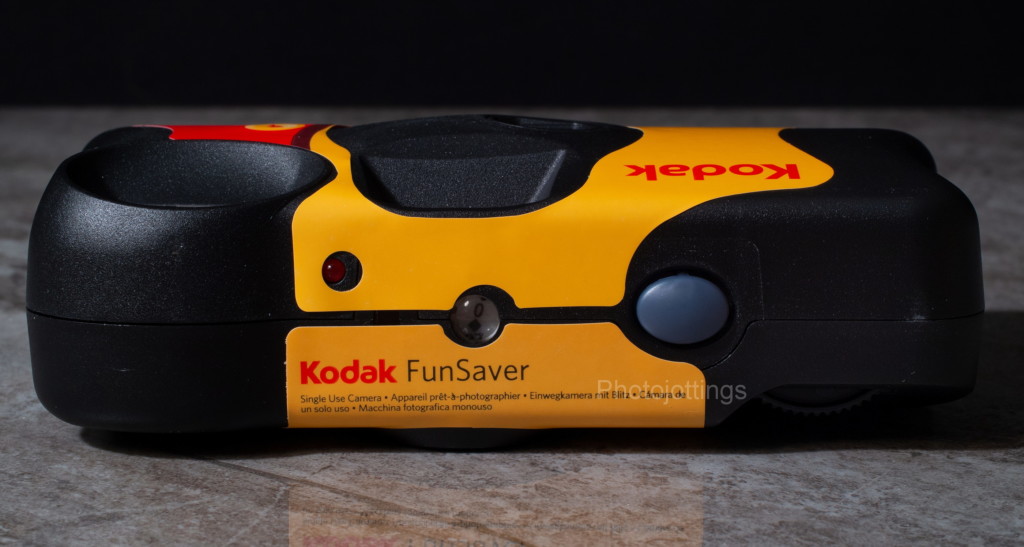 The red flash ready light is on top and to the left of the viewfinder.  The additive type shot counter is dead center, and the oval gray button on the right actuates the shutter. 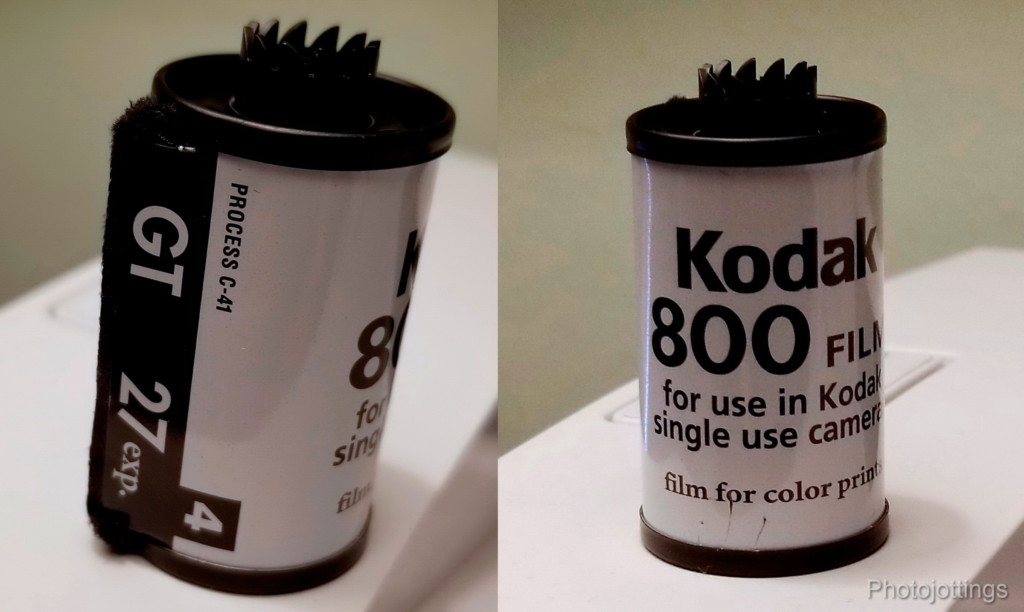 Here are some samples for you to enjoy. Click for larger images. All are 2400 pixels wide, and will not show any more detail even when scanned at a higher rate.  I think about 1600 pixels wide is actually all the detail you’ll get with a good scan.  I used the Nikon Coolscan 9000 ED for these. 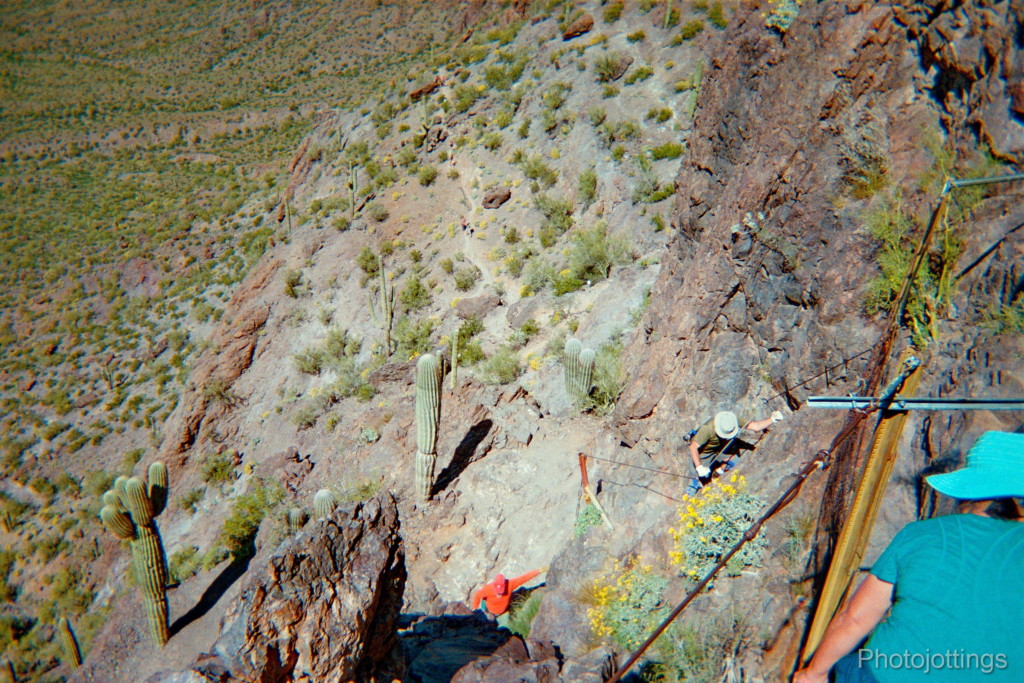 Picacho Peak State Park, about half way up. 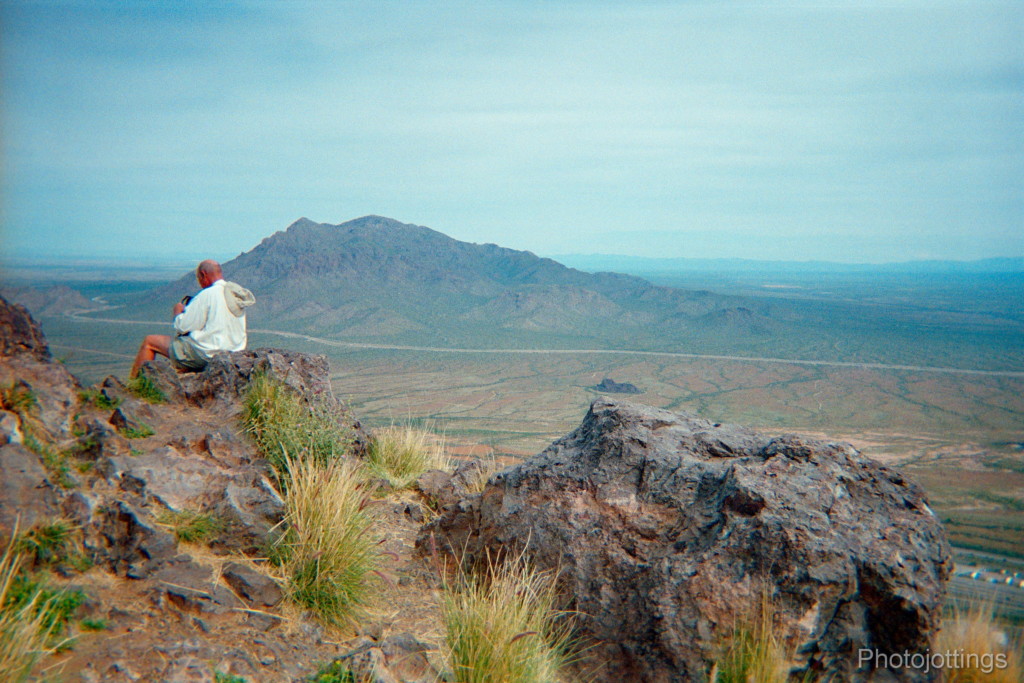 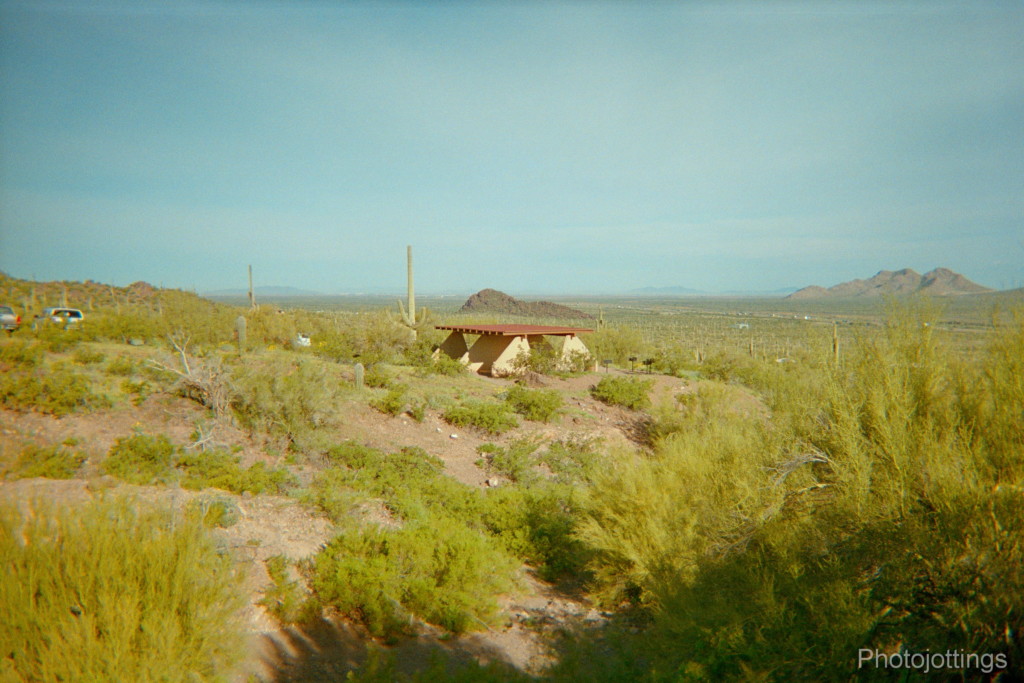 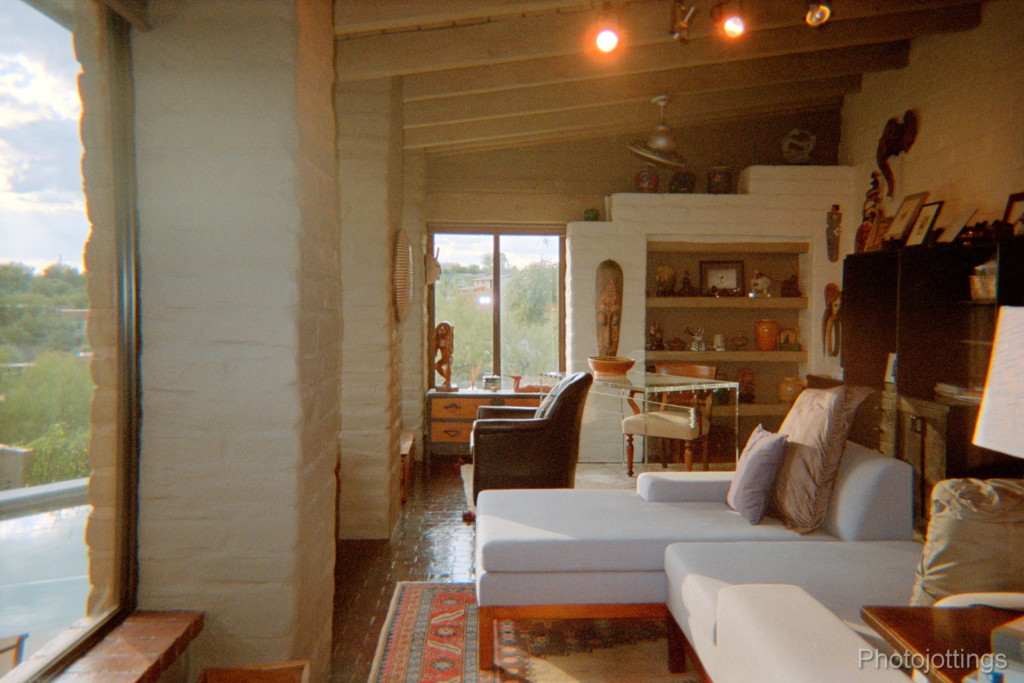 The flash was used here and it did a decent job of lighting the interior of this house. 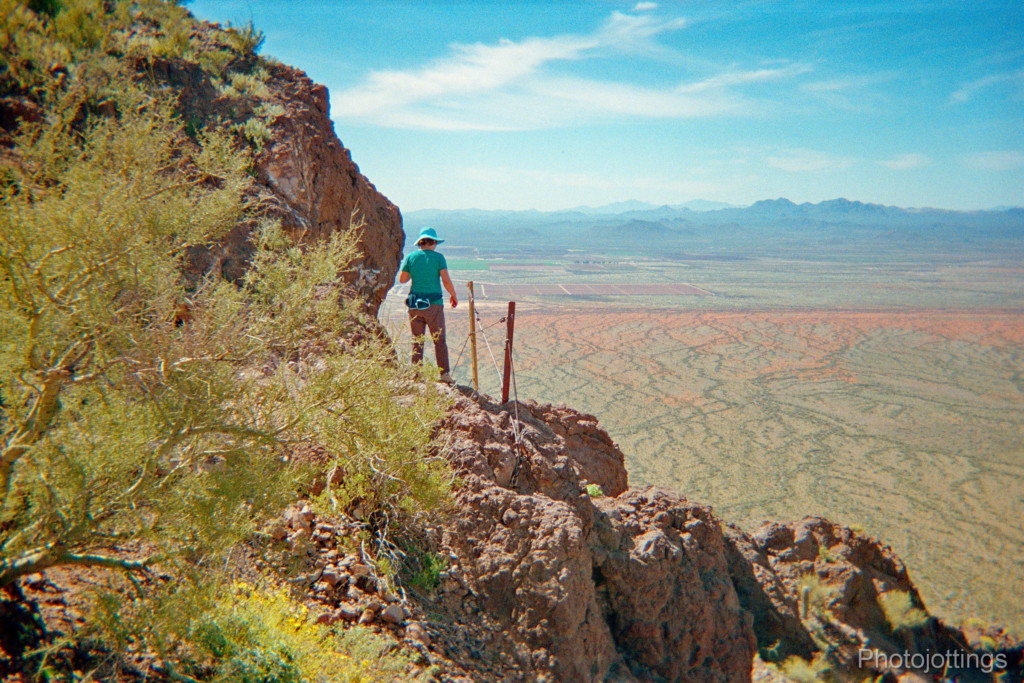 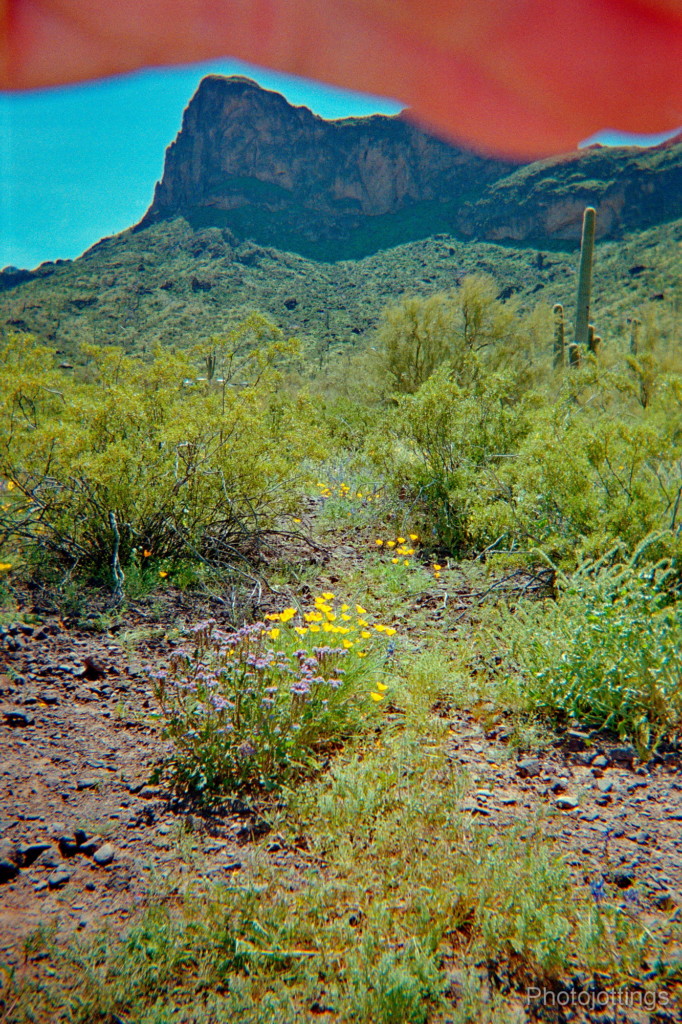 Picacho Peak State Park, near the trailhead.  For quite a few shots I tried to shade the lens from the sun using my hand, but as you see, the lens captured what the viewfinder did not.  Crap, about a third of my images had my hand in them. 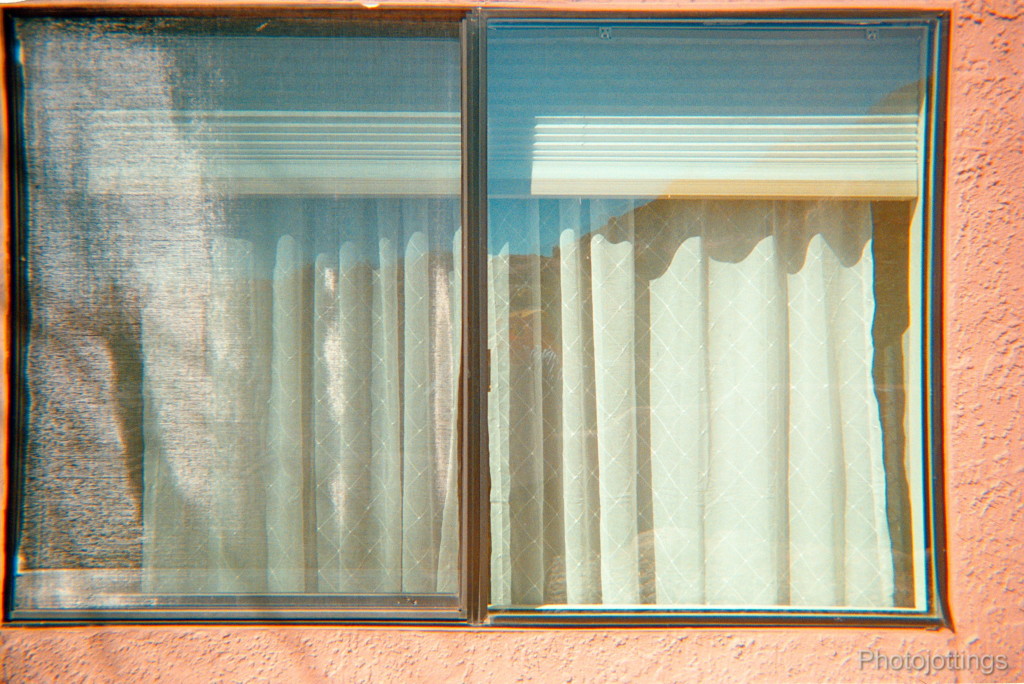 The actual view through the finder was just the window, so it appears the viewfinder is off center, and doesn’t show the whole capture area.  I see moderate pincushion distortion and color fringing along the sides between high contrast areas.

The Kodak FunSaver takes some decent photos if you enjoy looking at 4×6″ prints, or just want something different for a change.  My Mom went back to using disposable cameras this year as she got tired of fooling around with a digital camera that was always dead when she wanted to use it, or it didn’t focus right, or recorded video when she just wanted a still image.

The FunSaver has no such problems.  The battery will stay charged for years; and even if it goes bad, you can still use the camera outdoors in good light.  I used a disposable camera for a couple of years and kept it in my car where it’s 150° (65°C) degrees inside during the summer. When I got the pictures back from the shop, they turned out just fine.

All things considered, the Kodak FunSaver single use camera really is fun, and puts out decent photo quality, especially if you scan the negatives yourself with a good dedicated film scanner.  If you rely on your local developer/printer, you will probably not get anything close to what you see here, the reason being they scan the negatives too quickly, and that results in a poor light range from deep shadows to bright skies; plus the colors are not really accurate/punchy in my opinion.  But then again, this is a fun camera right? and if the images look crappy, so what, you had fun just taking the pictures!

Check out the Kodak FunSaver here; B&H, Amazon, eBay,  and help support the site, thanks!