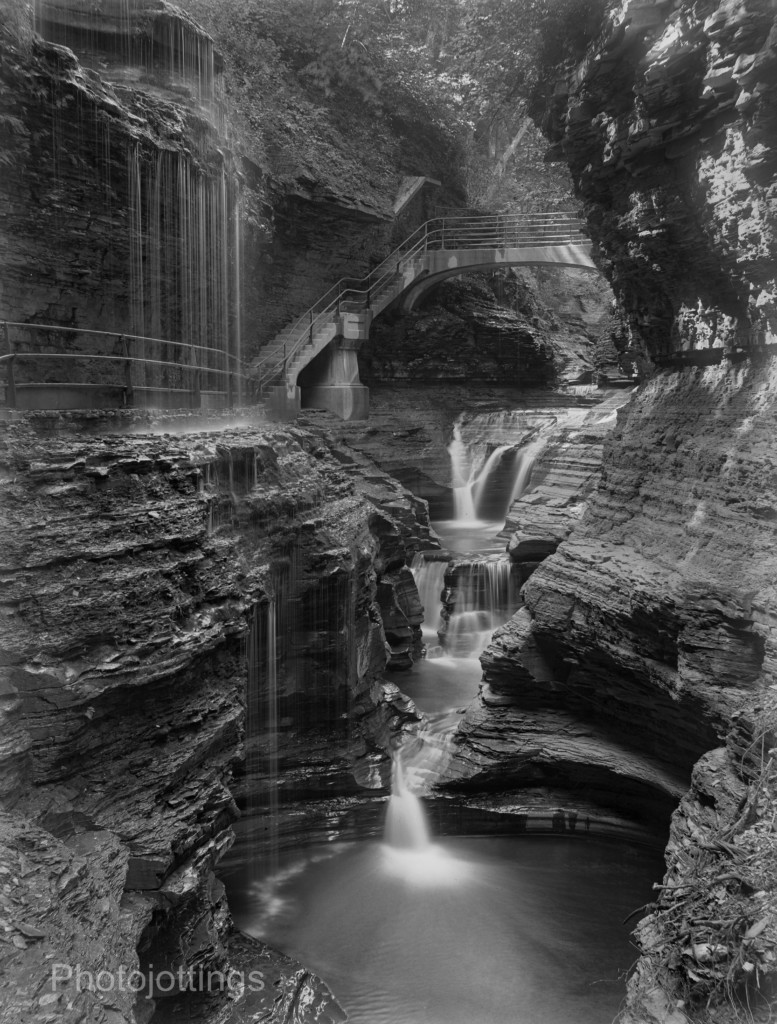 Click picture above for larger version. Scanned on an Epson V700.

Our second post from the Watkins Glen State Park series shows Rainbow Falls, and is located about a mile from the entrance and parking area, which incidentally, was the subject of our first post here.  The image is from a 6.5 x 8.5″ glass plate negative taken sometime in the 1920s.  To get an idea about how the scene looks today, go to google images.  If you look at the recent pictures, notice how the outer staircase has been lined with rock, as well as the railings along the left side.  A similar shot to the one above is located at the Watkins Glen State Park Wikipedia entry.

The image above (6000 pixels wide) has not been cropped or photoshopped other than my watermark.  I’m still amazed at how good these old glass plate negatives look after ninety plus years in most likely less than ideal storage environments.

It looks like there wasn’t much of a crowd on the day these pictures were taken, and likely the photographer deliberately chose a quiet day for setting up a full plate camera like the one used for these pictures, and exposing for a couple of minutes for each composition; that would be hard to do with a big crowd milling around.  I’ll try and guess the set-up for this particular shot just for kicks: a wide-angle 8″ (203mm) lens with some tilt, aperture at F/16-22, shutter at 1 or 2 minutes.  It would really help if I actually knew how big the space was in the picture, so maybe someday I’ll visit and update the post; but until then, it’ll have to be a wild guess.

Hope you enjoyed this peek at the past, and I’ll post a few more from the series in the near future.