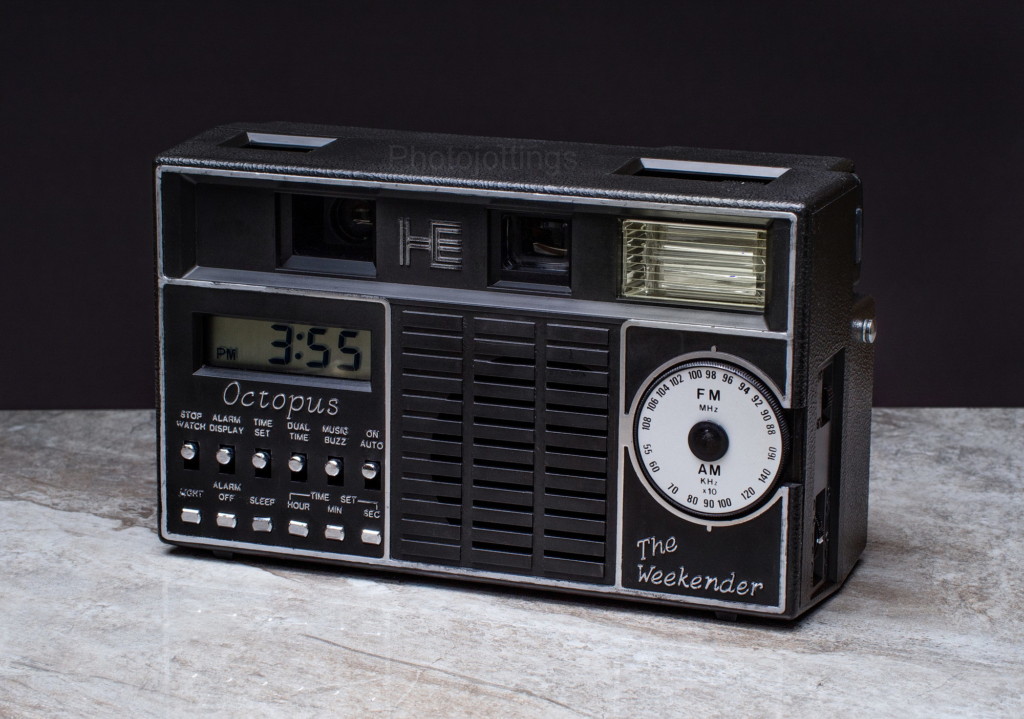 This week we review an interesting device, not often seen, or immediately identified as a camera; an AM/FM Clock Radio flashlight Camera, called ‘The Weekender.’  There isn’t much information available online other than a paragraph about it coming out in 1983, and being mail order only with a retail price of around $75.  I think the original post of the information is here.

The official name on the back of the camera is: Hendren Enterprise AM/FM LCD Clock Radio Camera-Model-The Weekender.  For a closer look and more info, see the images below.

‘The Weekender’ is also called the ‘Octopus,’ apparently because the device has eight functions: AM/FM Radio, 110 Camera, Clock, Flashlight, Storage compartment in back, Stop watch, Wake up alarm, and Dual time zone indicator.

Surprisingly, my ‘Weekender’ is fully functional, and I was able to take some snaps while enjoying music and hiking along a mountain trail.  Thanks to the alarm clock, I was able to turn around and head back to the car just as it was getting dark; but I ended having to use the flashlight to dig the keys out of my dark backpack, so the ‘Weekender’ came in pretty handy.

The Hendren ‘Weekender’ is quite large, and built of cheap flimsy plastic, the kind that bends and squeeks real easy when you apply any kind of force to it, like a GM/Ford/Chrysler car dashboard from the eighties.  The 110 camera looks like it was an afterthought, it’s placed on top of the Clock Radio, inside a cavity in the housing, with cutouts in the front for the lens, viewfinder and flash, and for the shutter button and flash switch on the top.  The camera moves a little inside the cavity when you press on it, apparently they just slipped it in there and screwed the two piece housing together and called it good enough; a quick fix for bad engineering would’ve been some felt or moltoprene between the surfaces to give it a more solid feel and keep it from bouncing around in there.  The buttons and switches in the ‘Octopus’ section are chromed plastic; the top ones are quite hard to move up and down, and the bottom buttons wiggle a lot when pressed, and don’t stay straight.  The AM/FM radio seems to work pretty good; it has a telescoping antenna, and about a 2¼” (PDyn moving coil) loudspeaker behind the plastic grill.

There may be a silver version of the camera in addition to my black version, look at the color around the lens and viewfinder inside the housing in the picture on the flickr post.

Believe it or not, the ‘Weekender’ takes six batteries in three different locations: two AA’s in the camera for the flash, three AA’s for operating the radio and flashlight, and one button cell SR44W/357/LR44 etc for the LCD clock.

I don’t have an owner’s manual, so I’m having to go it alone with the Weekender.  All the information I’m posting below is simply from an uninformed inspection, and screwing with the device.

So how does ‘The Weekender’ perform, and is it worth a hefty price tag if you can find one?  Those answers and more below!

Power: 2 AA batteries for the flash.

In the box; I don’t know, probably the unit with an owner’s manual and wrist strap.

Power: 3 AA batteries for operating the radio and flashlight, and one button cell SR44W/357/LR44 etc for the LCD clock. 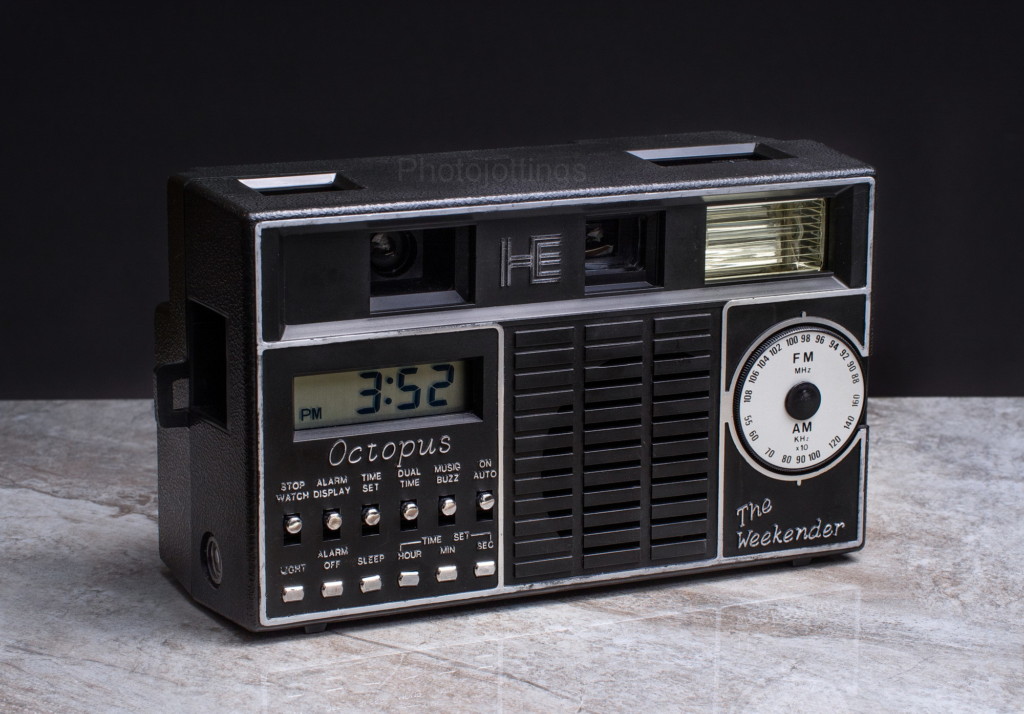 The front of the camera has three distinct areas other than the speaker grill.  We have the ‘Octopus’ section, the 110 camera section, and the radio tuning dial. 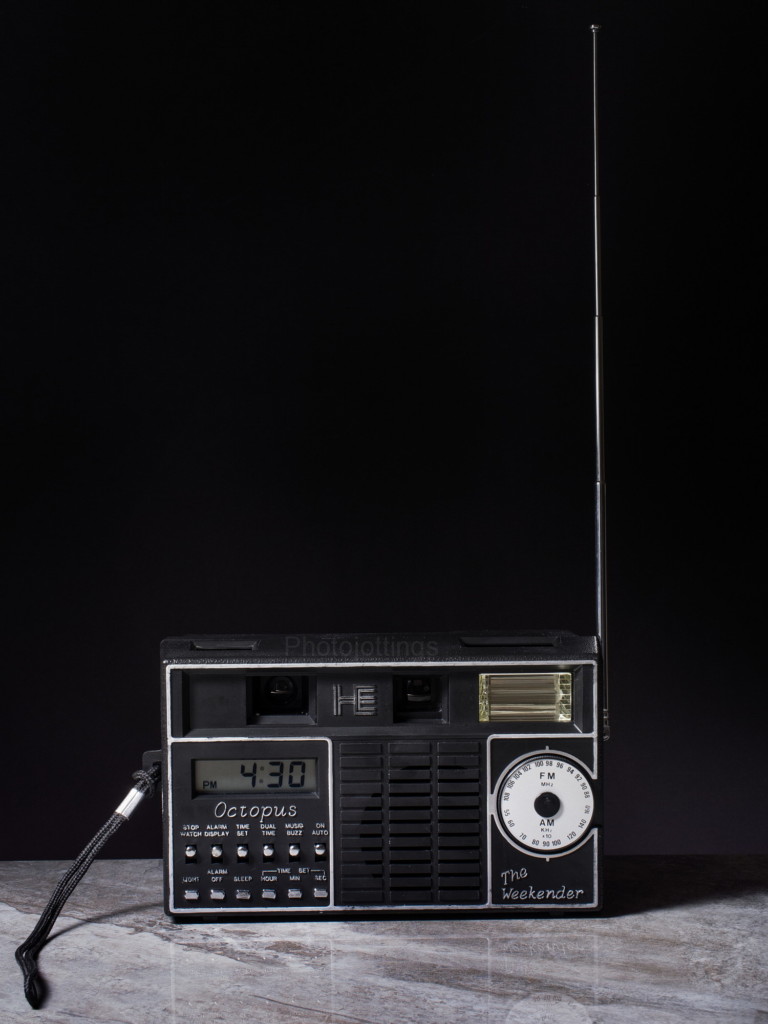 The ‘Weekender’ with the four section telescoping antenna raised up and ready to blast some tunes from the early 1980s—or it also could be ready to take our picture! 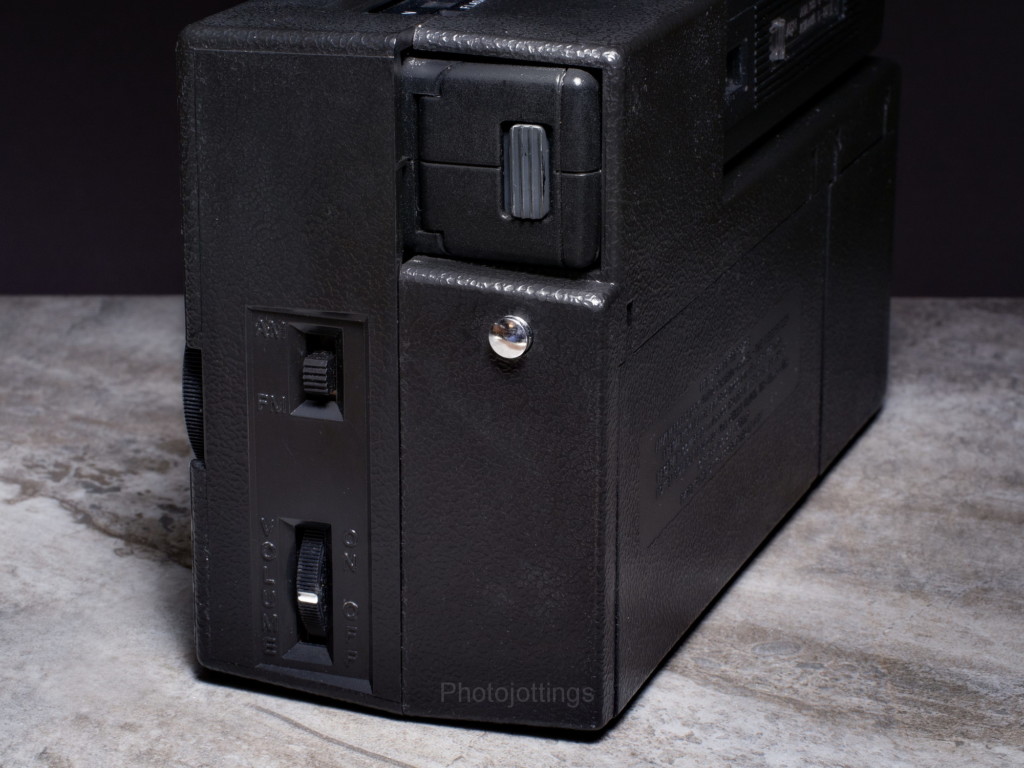 The right side has the radio AM/FM switch, on/off, and volume dial.  The camera battery door is at the top, it takes two AA’s; see the open picture below.  The little chrome circle under the camera is the tip of the telescoping antenna in the stored position. 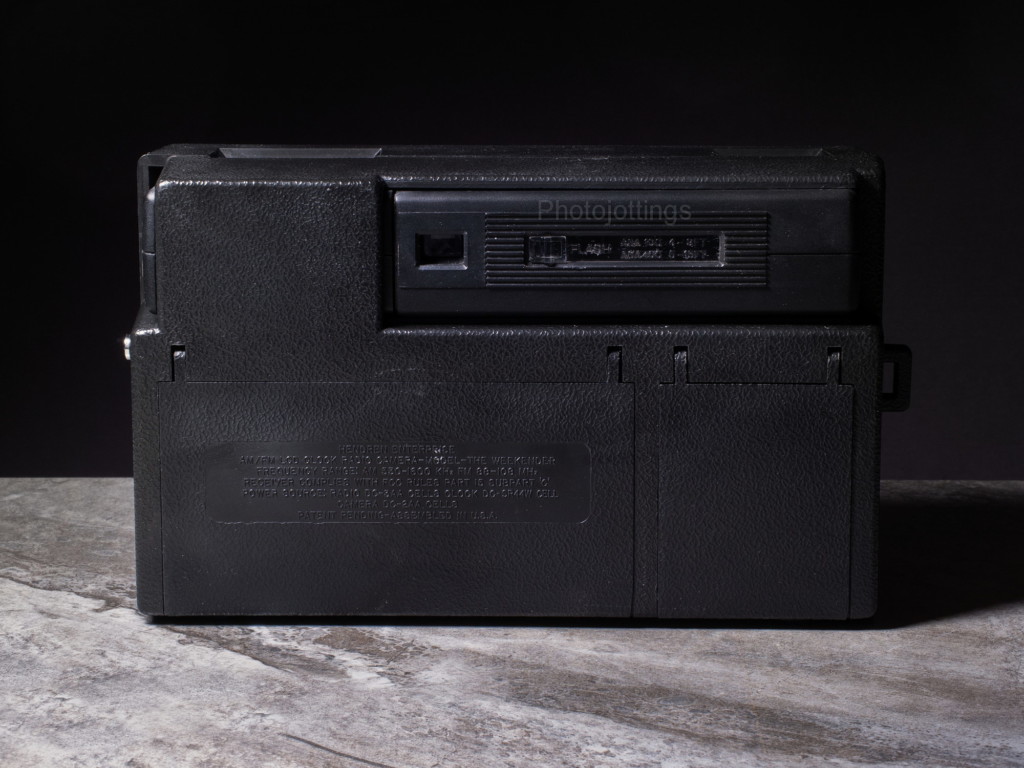 The large compartment on the lower left is for storage, say maybe a extra pack of film, or some batteries.  To the right is where the three AA batteries go for powering the Radio and flashlight.  The camera film door is on top with the little viewfinder in the center. 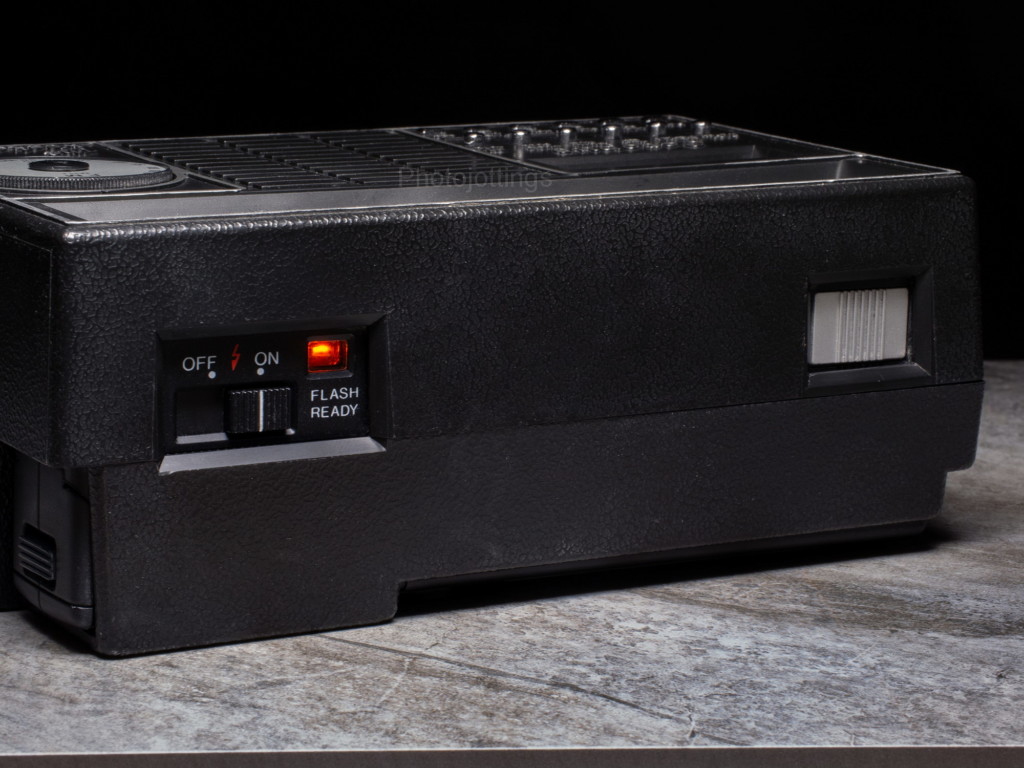 The top has cutouts for the camera flash and shutter button. 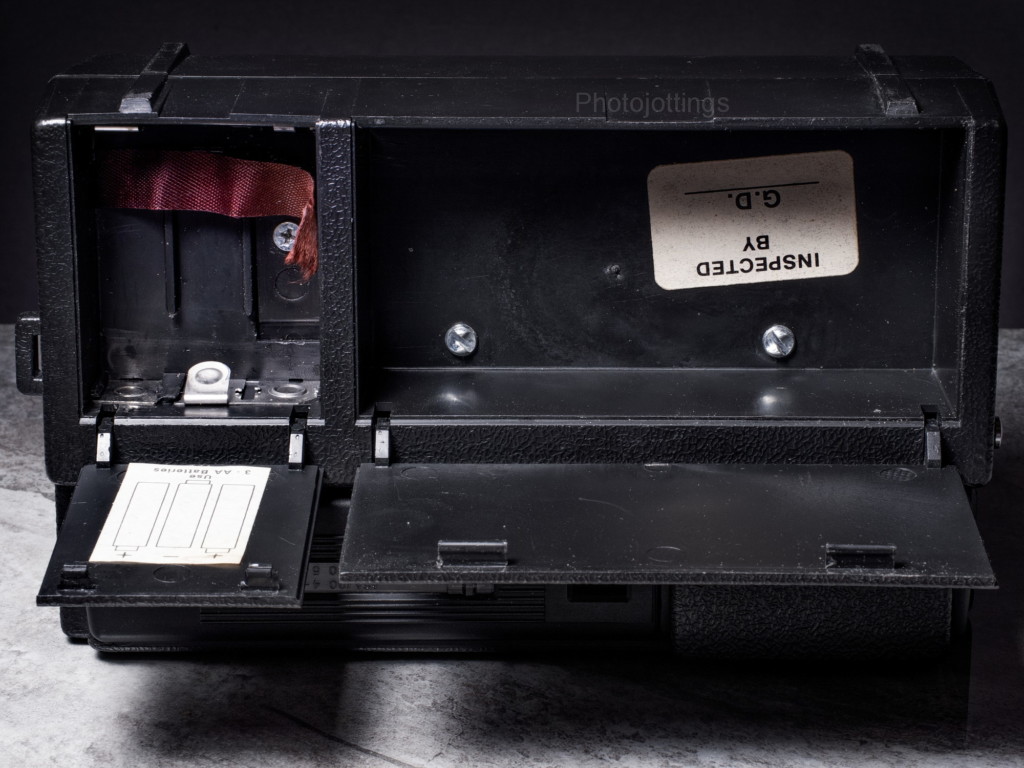 Upside down view.  On the left is the battery compartment for the Radio and flashlight, it takes 3 AA’s and they’re very hard to insert, maybe today’s AA batteries are slightly longer than the ones from the 80s.  On the edge of the red cloth tape (battery remover) is a phillips head screw; remove the screw and plastic cover, and put in a fresh SR44W/LR44/357 coin cell battery for the LCD clock.

On the right is the storage compartment.  It doesn’t hold much, maybe three AA batteries and one 110 film cartridge.  Notice the tamper proof screws holding the housing together.  I guess Hendren didn’t want anyone screwing around with their stuff.  Good luck taking these screws out without messing up the plastic panel. 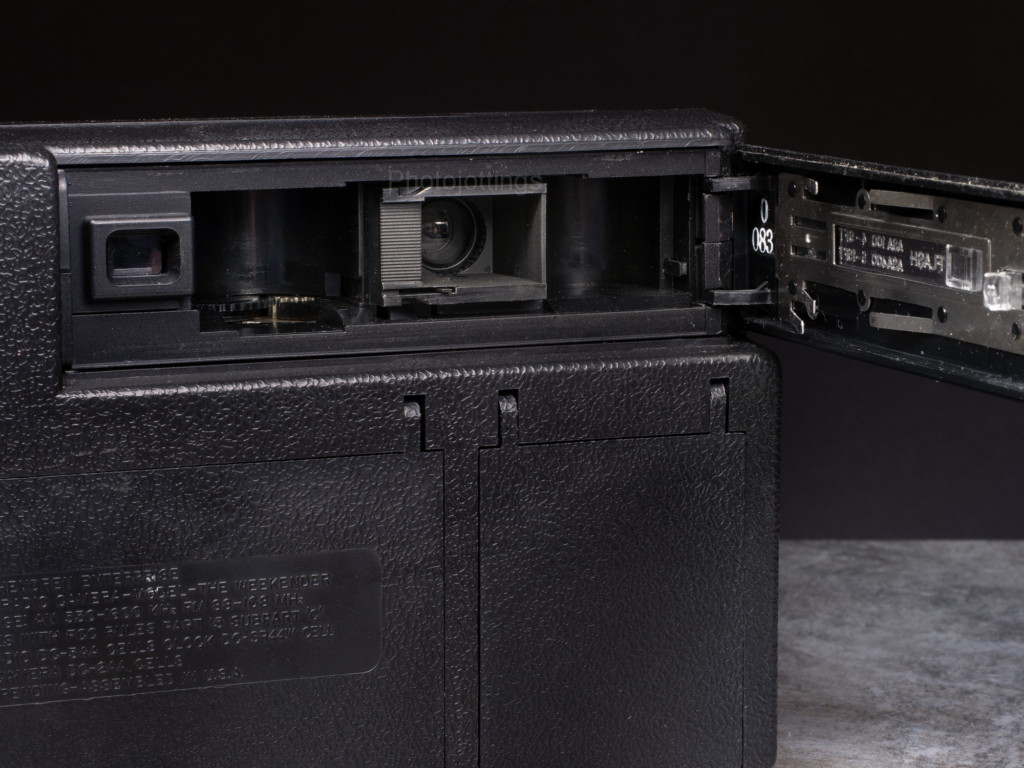 Inside the no-frills 110 camera. 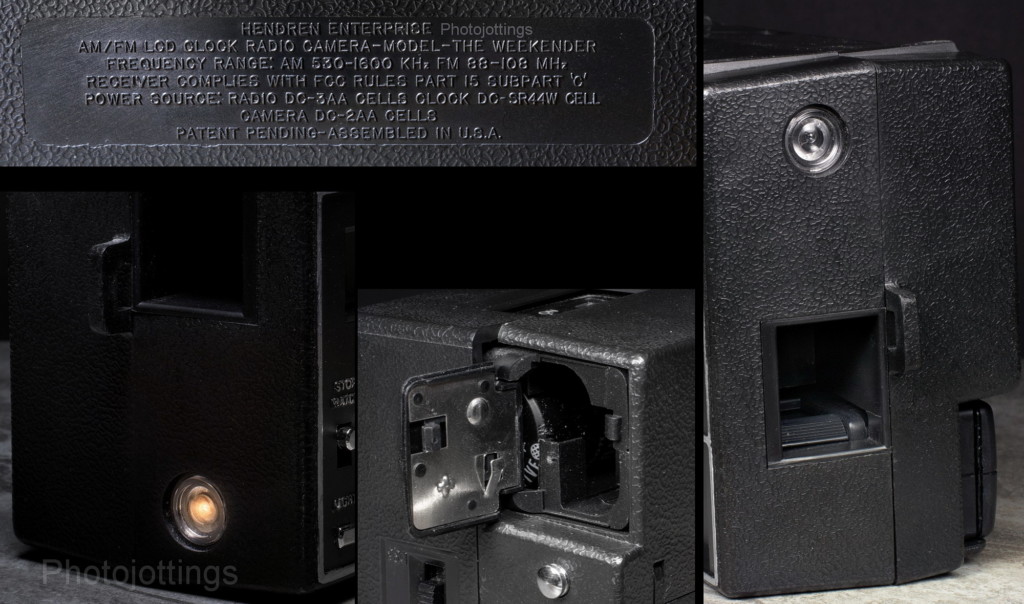 Close-ups of various points of interest; on top is the information on the back of the Radio, lower middle is the camera battery compartment open; on the right; In this upside down view you can see the winding lever for the camera, you stick your thumb in there and push it to the next shot.  The little clear plastic circle is the flashlight lens; it has a tiny incandescent bulb behind it, and puts out a yellow/orange light; left picture; it looks really dim when compared to today’s LED pen lights. 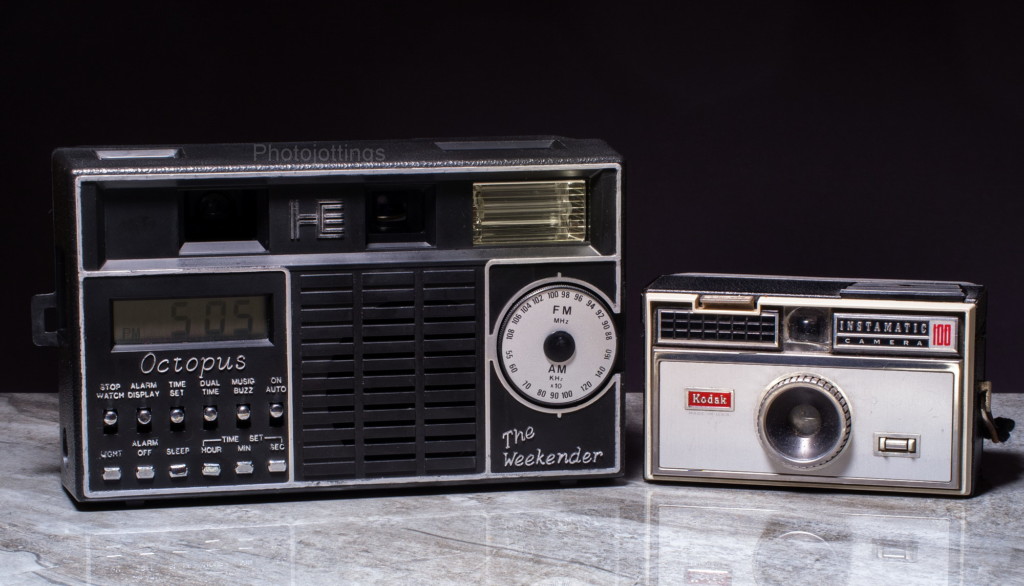 The Hendren ‘Weekender’ is quite large when placed next to the Kodak Instamatic 100, which uses much larger film, and takes better pictures, but it doesn’t play music or tell you the time!

Here are some samples for you to enjoy. Click for larger images. All are around 1100 pixels wide, and will not show any more detail even when scanned at a higher rate.  I used the Nikon Coolscan 9000 ED for these. 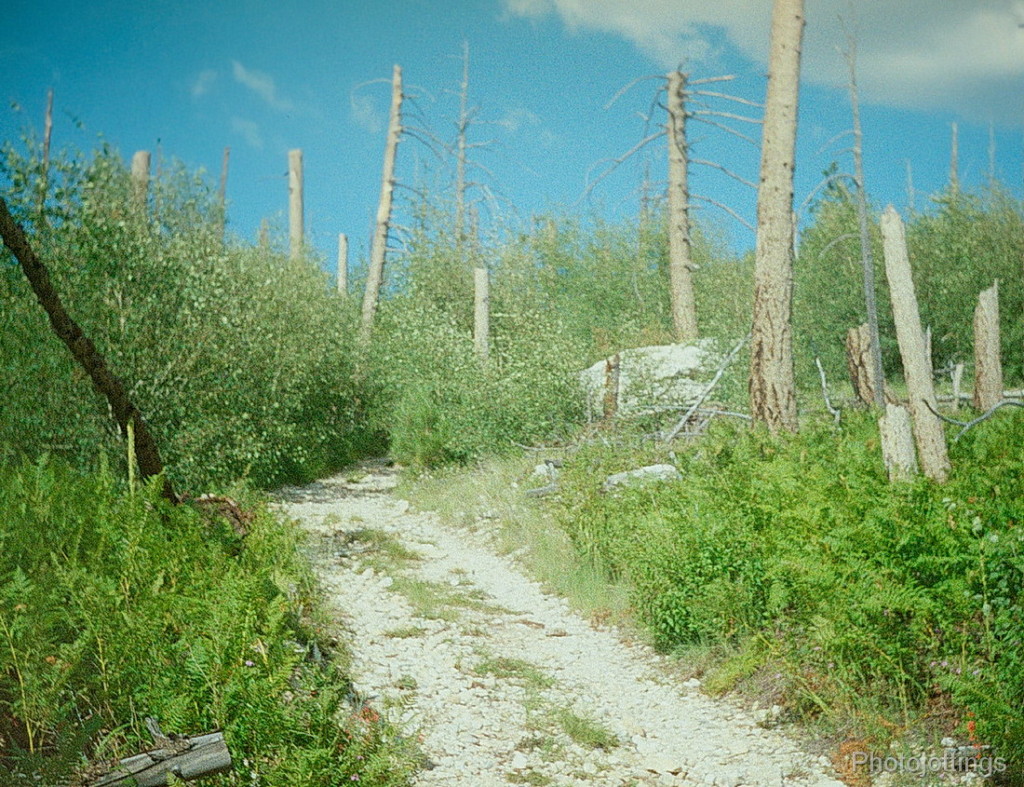 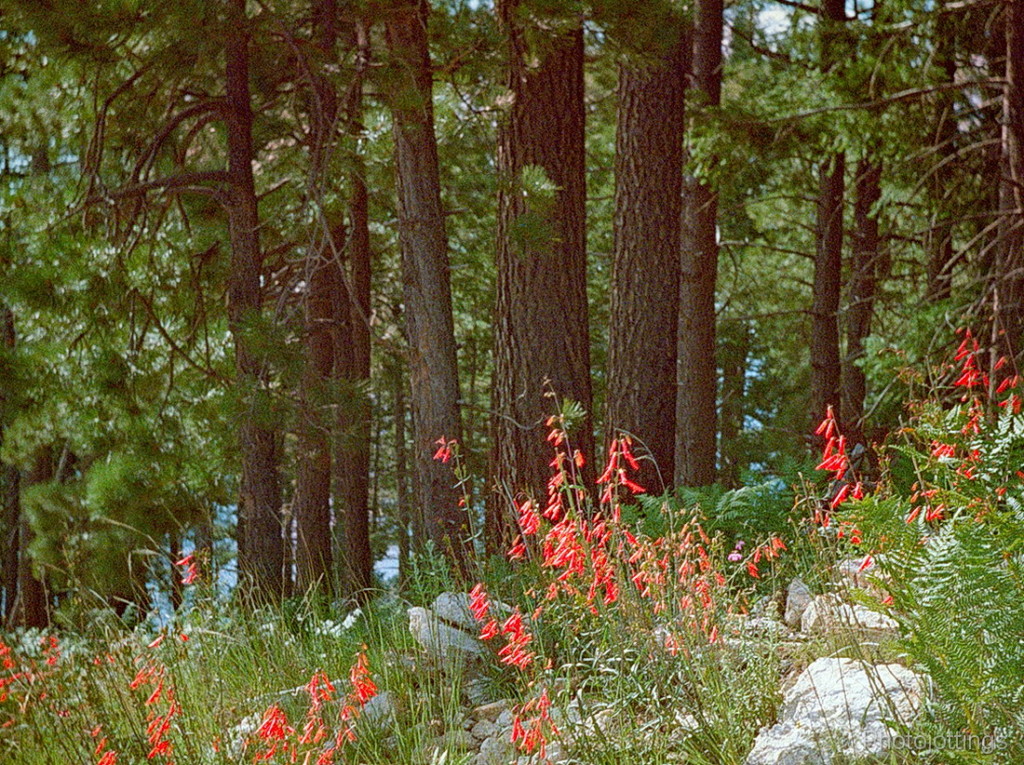 Firecracker Penstemon in the forest. 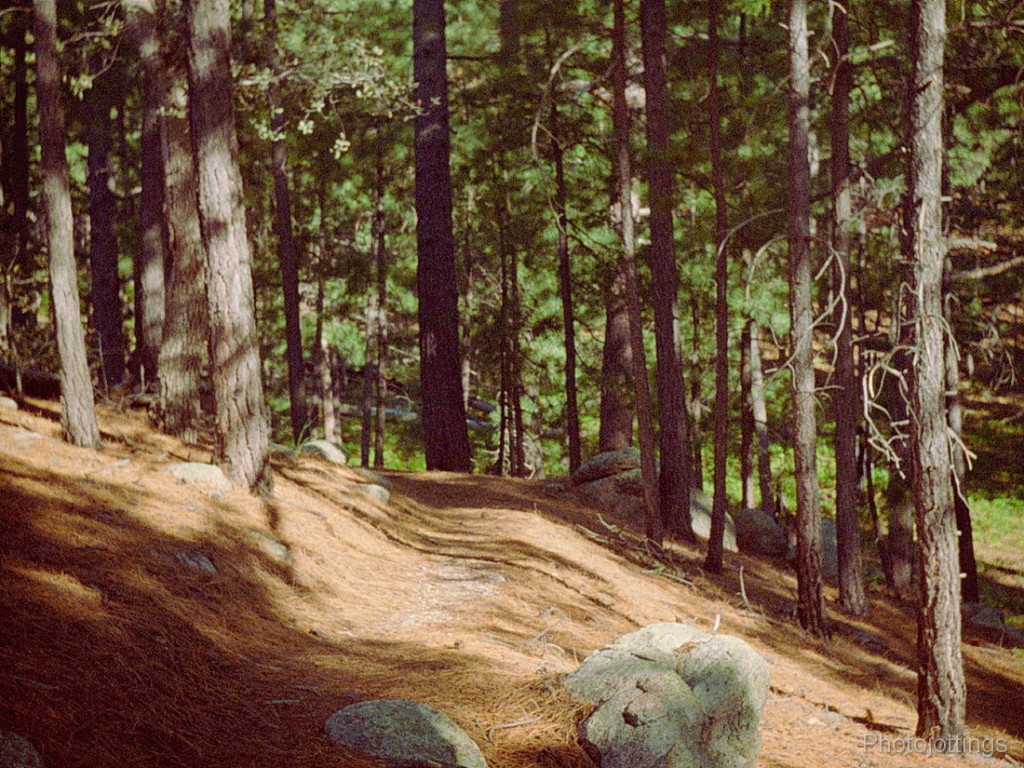 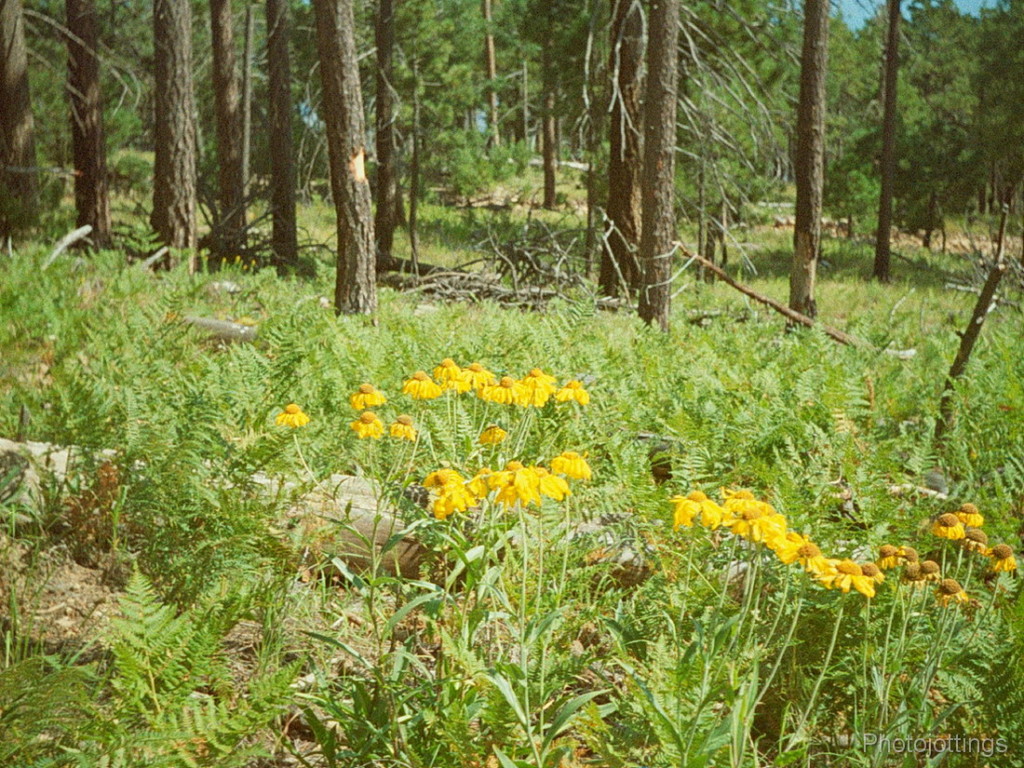 Daisies and ferns after the burn. 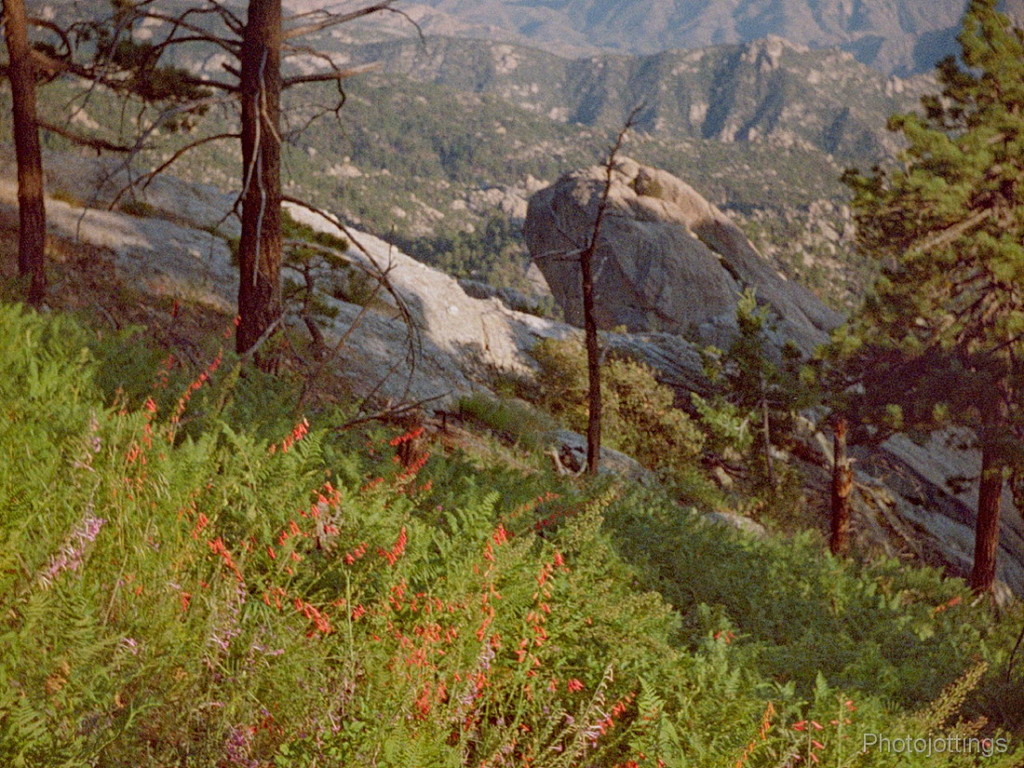 In the high country. 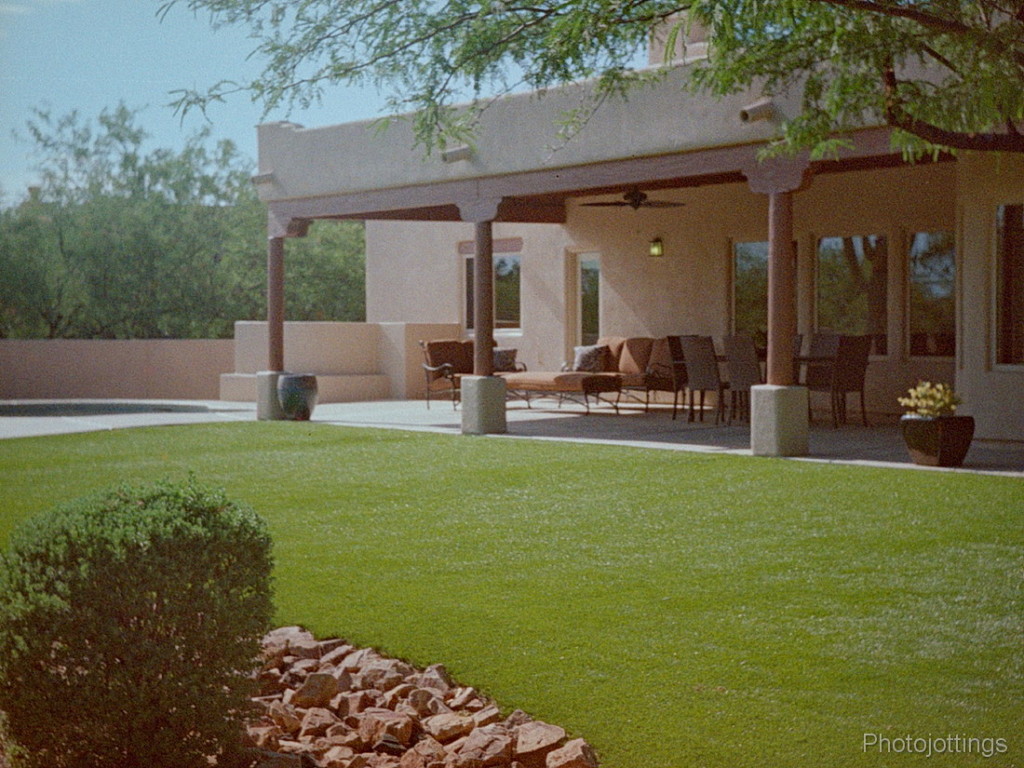 Here I used it for a real estate photo shoot.  The longer focal length makes the home look more natural, instead of the usual super-wide ‘get it all in’ look.

The Hendren Weekender was probably a cool device back in the 1980s; having a small clock radio at the motel room for waking you up, and a camera for those goofy vacation snaps must’ve been handy.  But gosh, I had a wrist watch with the clock and alarm features, a small pocket radio, and a Kodak Instamatic 100 that when combined, were still smaller than ‘The Weekender.’  Apparently, the Weekender was more of a neat ‘gimmick’ than a practical product.  It makes sense that it was supposedly only available via mail order; that way you weren’t able to see how large, clumsy and cheap the thing was.  But guess what, thirty years later it becomes a collectable.

The Weekender is quite hard to find when looking online, even on eBay.  I waited a long time before I saw one for sale, and grabbed it up quickly because I thought it would be a nice addition to my ever growing (and nearing outrageously large) camera collection.  With that said, the camera is not custom made for the device, it’s appears to be just a cheap off the shelf model that Hendren thought would fit correctly over the clock radio portion, and made cut-outs in the housing for the camera controls.

In the end, the Weekender has no practical use now days other than as a conversation piece. It’s a shelf queen, and I’ll be proudly displaying it along with my hundreds of other cameras(!)

If you’re simply looking for a radio camera from the same era, check out the Panasonic and National C-R1, C-R2 and C-R3 Radicame series, these models are much easier to come by.