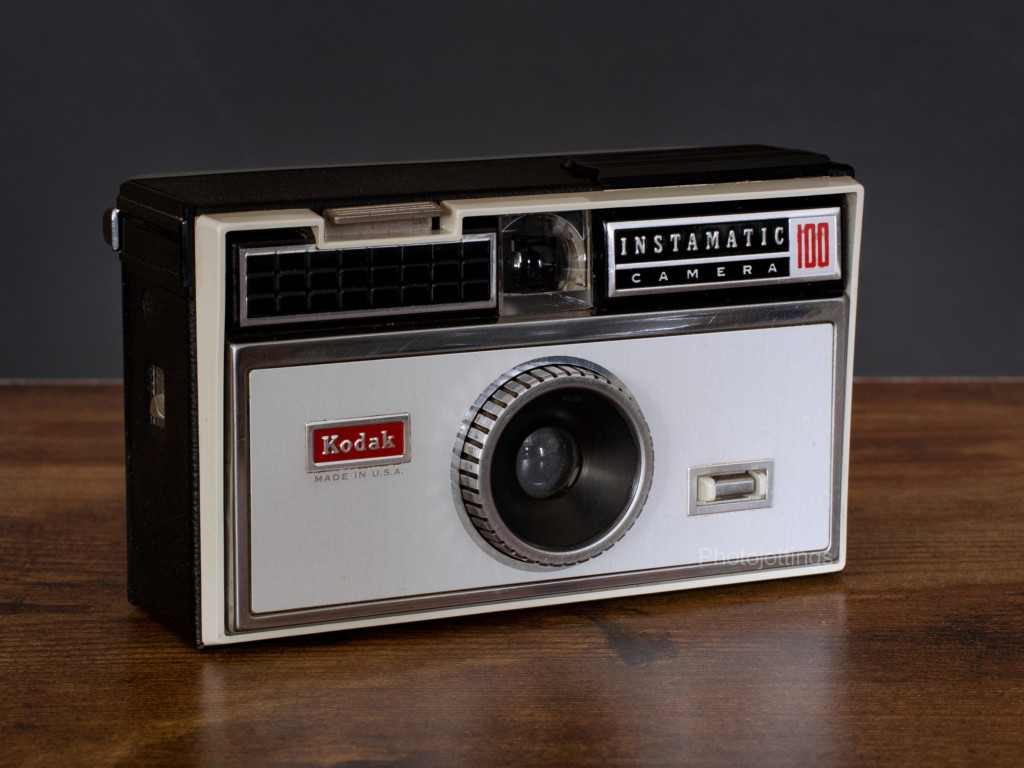 Today we review my very first camera; a Kodak Instamatic 100.  My Parents bought this camera brand new for taking snaps of my older baby brother.  Actually, my Dad took pictures of my brother with this good camera, and by the time I came alone, the fascination and uniqueness of babies and pictures was over, and my Mom ended up taking all the snaps of me with this inexpensive instamatic.

The Kodak Instamatic 100 used a new type of film which came in a plastic cartridge, called a ‘Kodapak’ by Kodak; there was no need for the awkward task of threading film on the take-up spool like 35mm film, you simply dropped the cartridge inside the camera, closed the back, wound it until the lever locked, and started taking pictures, all in about 5 seconds flat.  The instamatic 100 (including several iterations over the years) sold by the millions, with a 1970 end-of-the-run final tally at over 50 million units.  The Kodak Instamatic 100 won a Certificate of Design Merit from the Industrial Designers Institute, and was designed and patented by Frank Zagara working for Kodak in 1963.

Due to the fact that fresh 126 film is no longer available, and the quality of long expired film probably won’t show the true character of the lens, I decided to post the actual photos that were taken with the camera from the 1960s to the 1980s!  Believe it or not, the color prints we have all the way back to the 1960s still look good, and I could’ve just posted the prints, however I went the extra mile and scanned the negatives to get the most out of them, and have posted quite a few samples for you to check out below.

Fun fact: many sites claim (among other reasons) the 126 format never contended with 135 format is because the negative is too small, and it wouldn’t print nearly as large as 135 (35mm) format, however, the actual capture area of the film is only 6% less than 35mm film, hardly noticeable especially when you consider the differences would be easily concealed by the quality of the lenses and type of film used.

I was gifted this camera by my parents when I was about 10 years old, and used it until I turned 18 and left home.  Eventually I saved up enough money for a brand new Canon AE-1 program, and put the little instamatic in the drawer, where it’s been for nearly four decades.

Well, that’s enough of the sentimental drivel, let’s see what the Kodak Instamatic 100 is all about.

Original Price: camera outfit with film, batteries and flashbulbs, ‘less than $18.00’ says Kodak in 1964 advertisements.  Current ebay prices are roughly $10-$20 for a good working model, and substantially more for one with all the accessories in the box.

Approximate resolution; , similar to a 1.0mp cheap digital camera from the late 1990s.

Shutter and speed; shutter with two speeds, my testing shows 1/90s normal, and 1/40s with the flashbulb holder extended.

Features; Point and shoot only, no frills for this model.

Accessories for this model; aftermarket tele and wide lenses with finder.

Crippling features and omissions; none, it’s for snaps only.

The camera with ‘kodapak’ Verichrome pan (B&W) film (ISO 80?) with an expiration date of March, 1972, purchased at Walgreens for 49¢.  The film comes in a box, and is sealed in a foil wrapper. 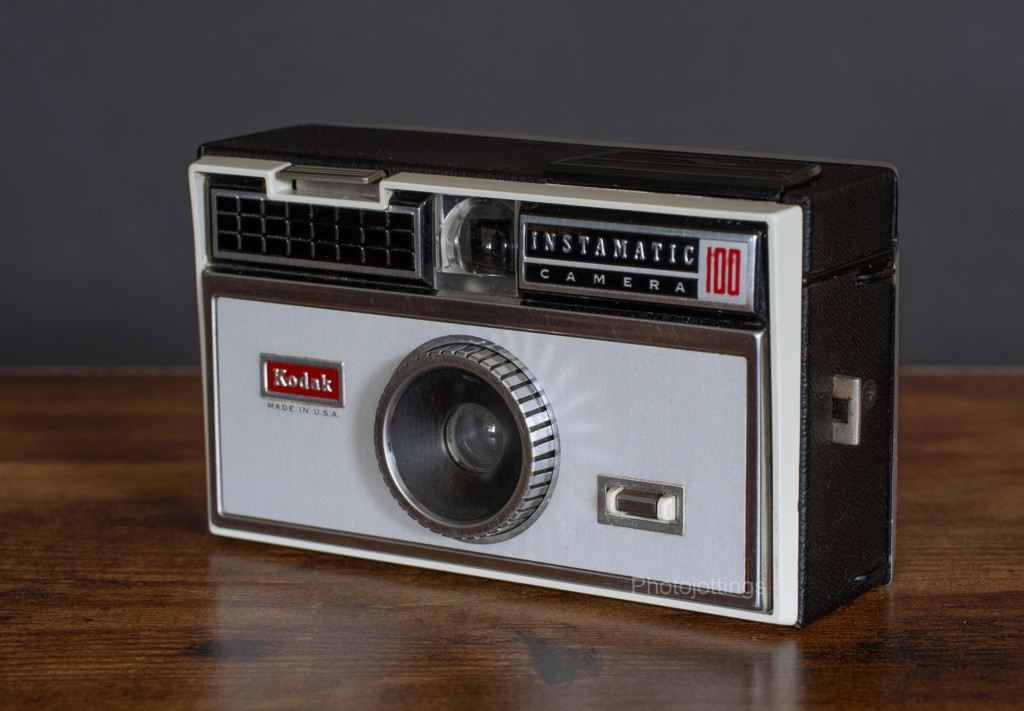 The front of the camera has a few features to point out; the shutter button is the rectangular silver stamped metal piece along the top, just above the fake light meter cell.  The viewfinder is in the center, and strap lug on the left side.  The little oblong button beside the lens is for popping up the flash. 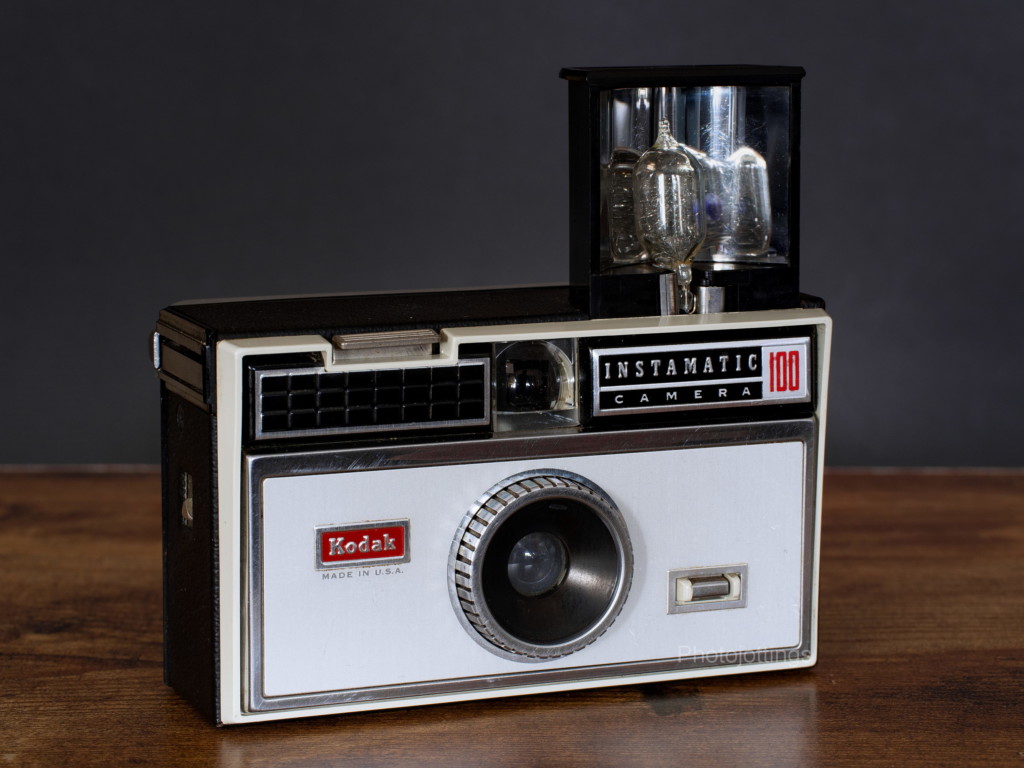 Here the flash housing has been popped up, and an AG-1 bulb slid in the receptacle.  Incidentally, by extending the flash, the shutter speed is reduced by about half to 1/45s; and you don’t need a bulb inserted or batteries installed for it to do this.  On the backside of the flash is a small lever to remove the hot bulb without having to handle it. 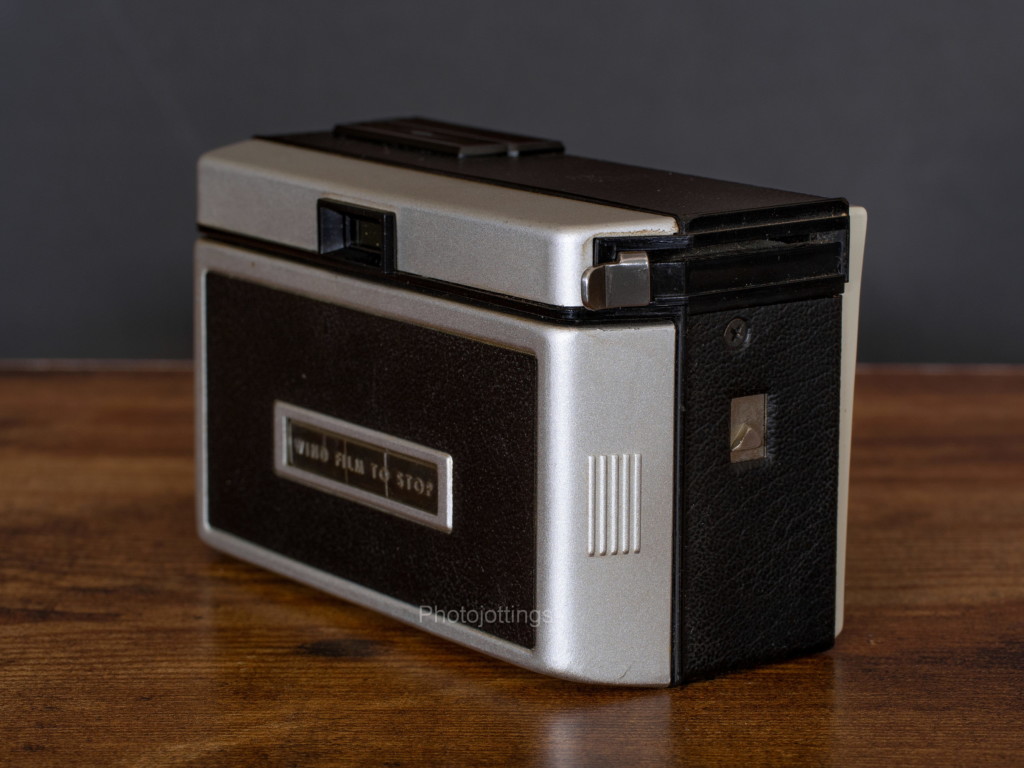 On the right side of the camera is the back opening latch, and the film winding lever. 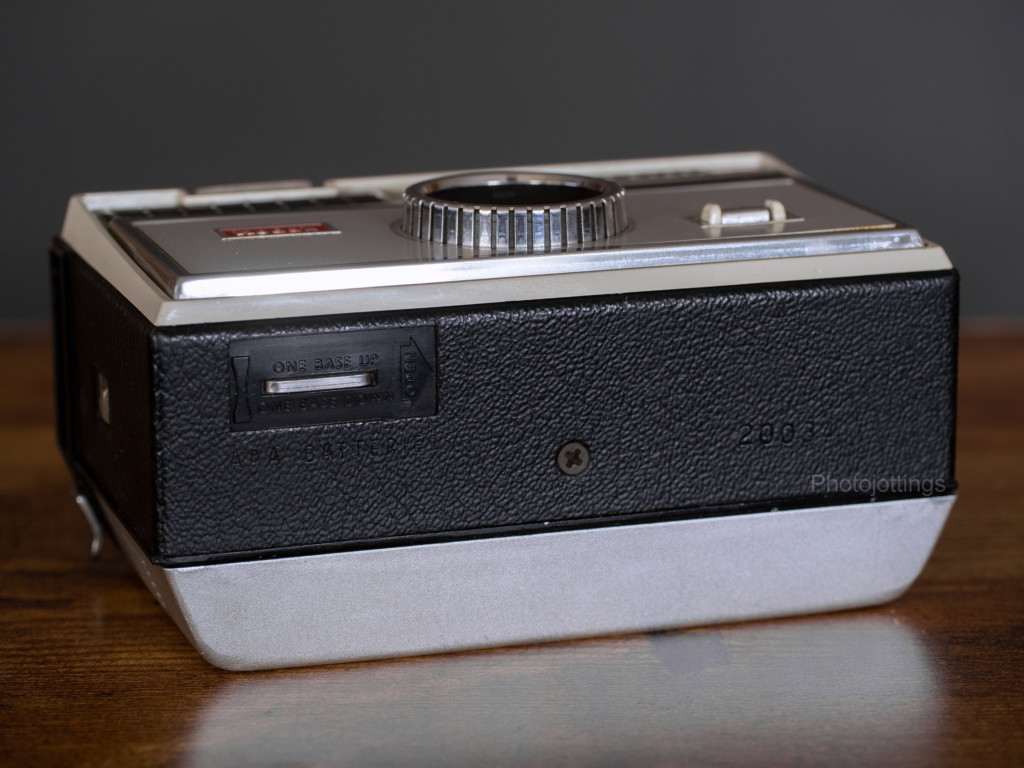 On the bottom you’ll find the battery compartment, it takes two common AAA batteries.  The door slides open and you insert the batteries with one base up, and one down.  Notice there is no tripod socket. 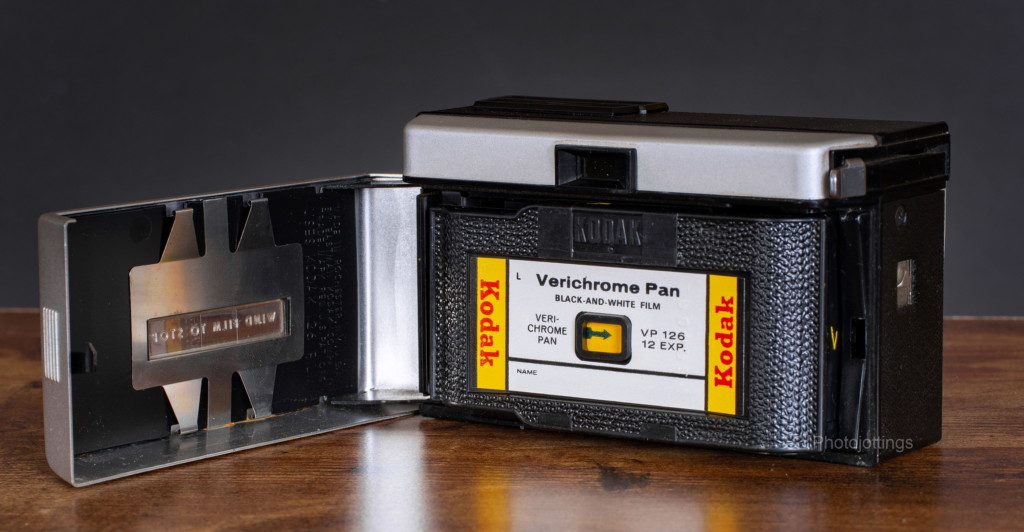 The ‘Kodapak’ film cartridge is placed inside the camera, now you just close the back and you’re almost ready to go! 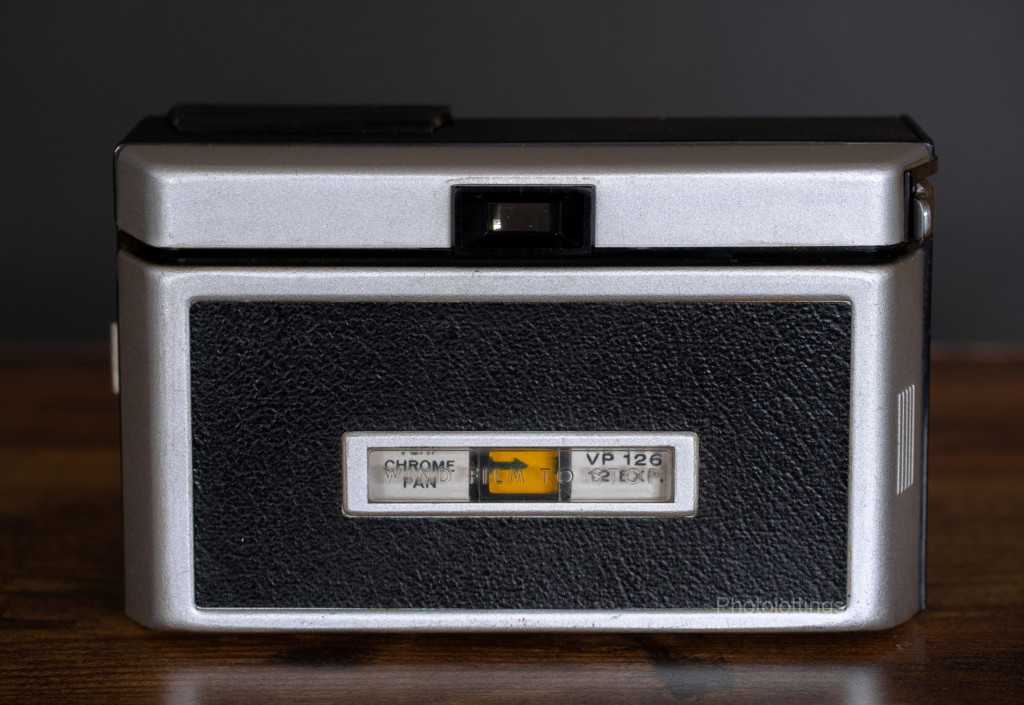 The back has been closed, and the film needs to be advanced to number 1.  The clear plastic window lets you see the shot number and type of film, very similar to the 110 format.  The black rimmed viewfinder is small and tunnel like, but it is clear with a neutral color. 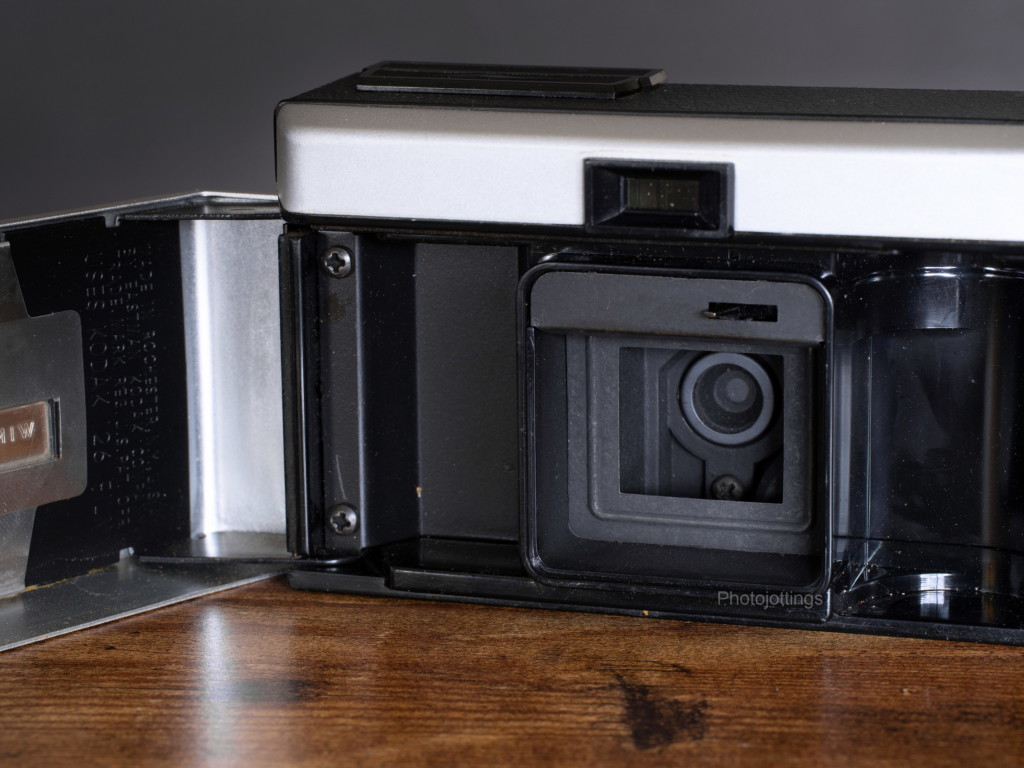 The inside of the camera is quite sparse, and the only exposed moving parts are the little lever above the film gate, and the winding mechanism at the top, by the winding lever.  There is no need for moltoprene seals around the door as the film pack covers the entire film gate. 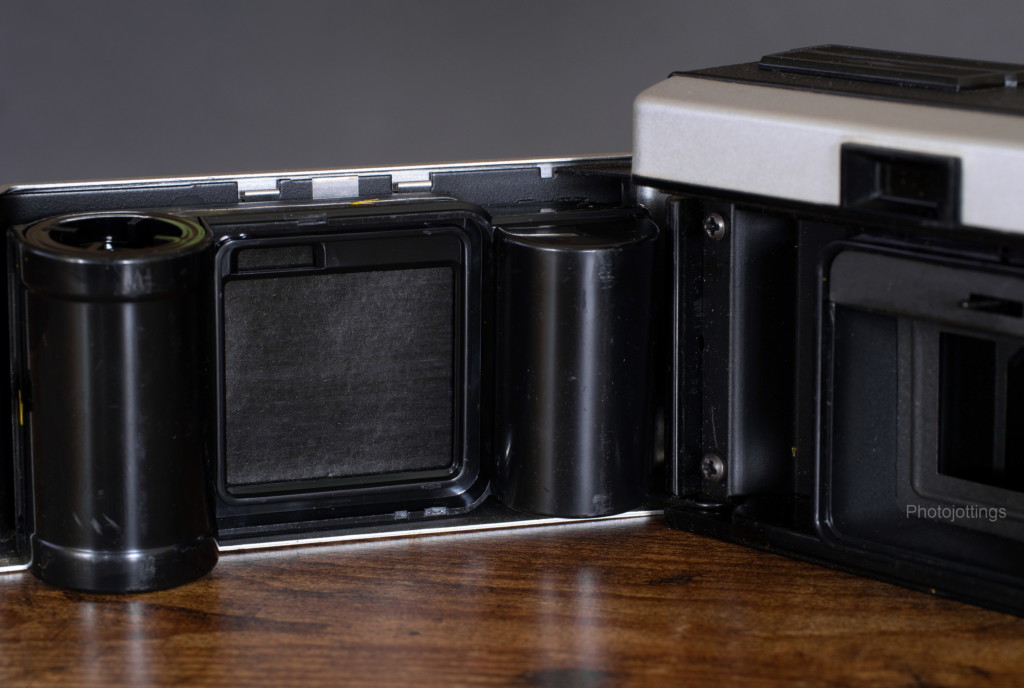 Here I put the film pack on the camera door to show you how it fits inside.  Notice the film has a slot to allow the shutter cocking lever to engage the perforation in the film.  In this image the film has not been advanced, and the backing paper is showing; the actual film is exposed when you wind it to the first shot.  So if you take out the film before the end, you’ll ruin a shot as it will be exposed to light.  The backing paper is for keeping light out for initial installation. 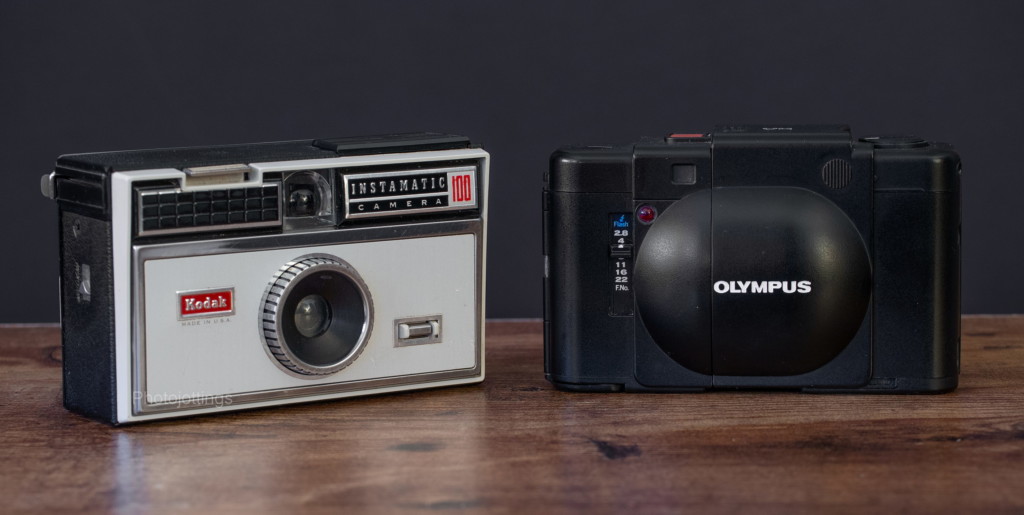 The Kodak Instamatic 100 is about the same overall size, but noticeably thicker than the tiny Olympus XA without the flash. 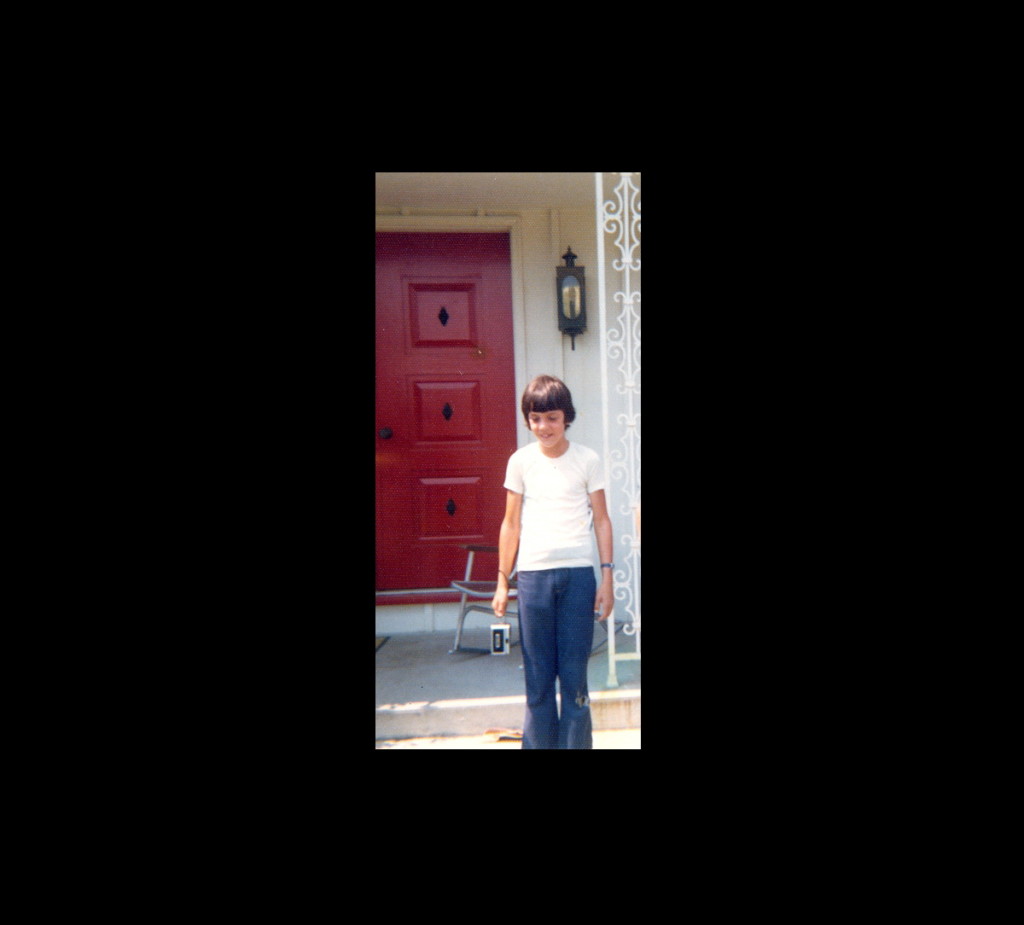 Here are some samples taken with film from the era. The pictures are 2000 pixels square, so click for a larger version.  Scanned on a Nikon Super Coolscan 9000 ED.

This is how the negatives look when scanned.  The film uses pre flashed printing masks similar to 110 film.  The actual clear area is 29mm wide by 28mm high, or about 94% of 135 format film.  Printing would crop the size to about 26.5mm square.  Interestingly, if you count the printing mask area of the image, the 126 negative size would be almost identical to 135 format! 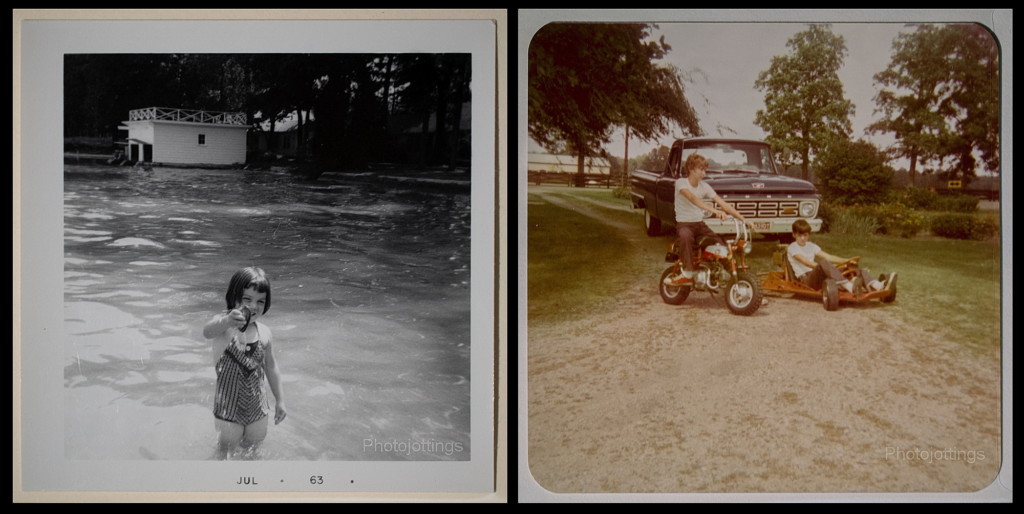 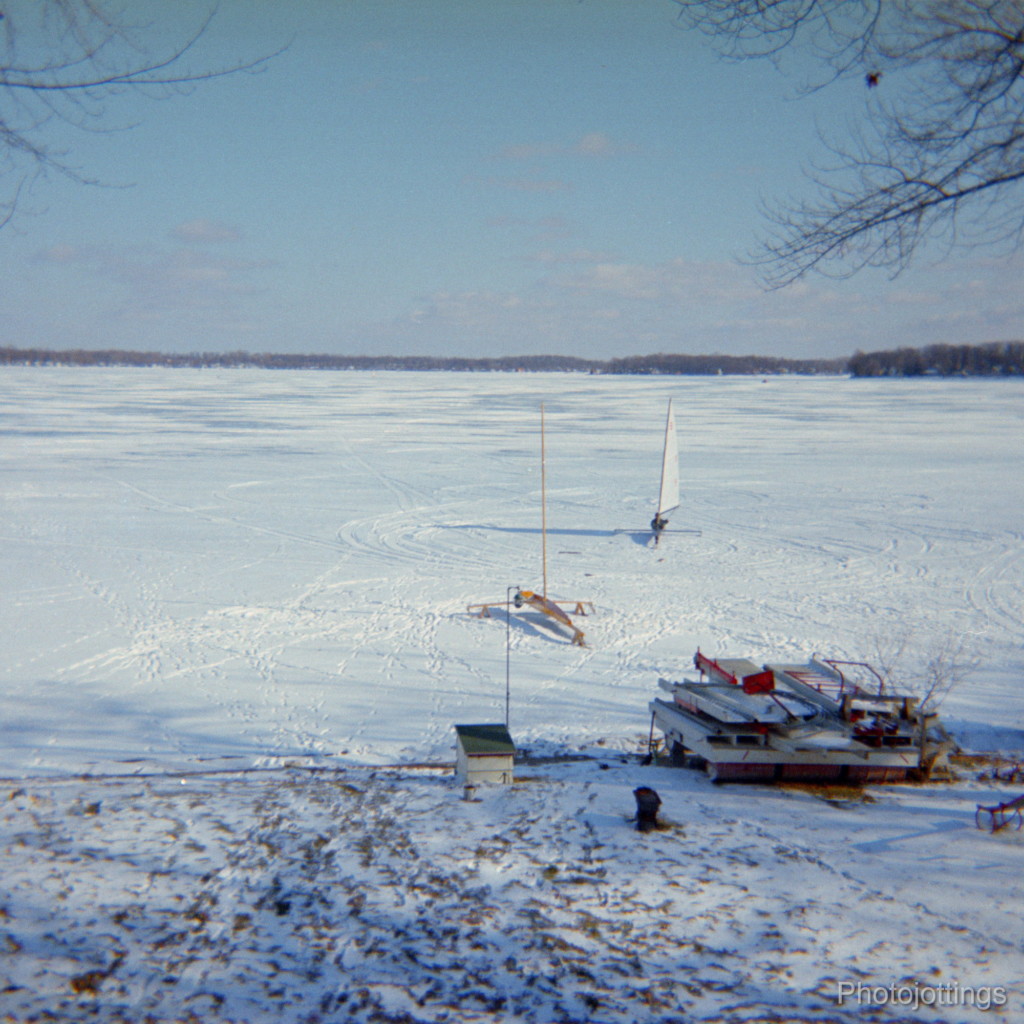 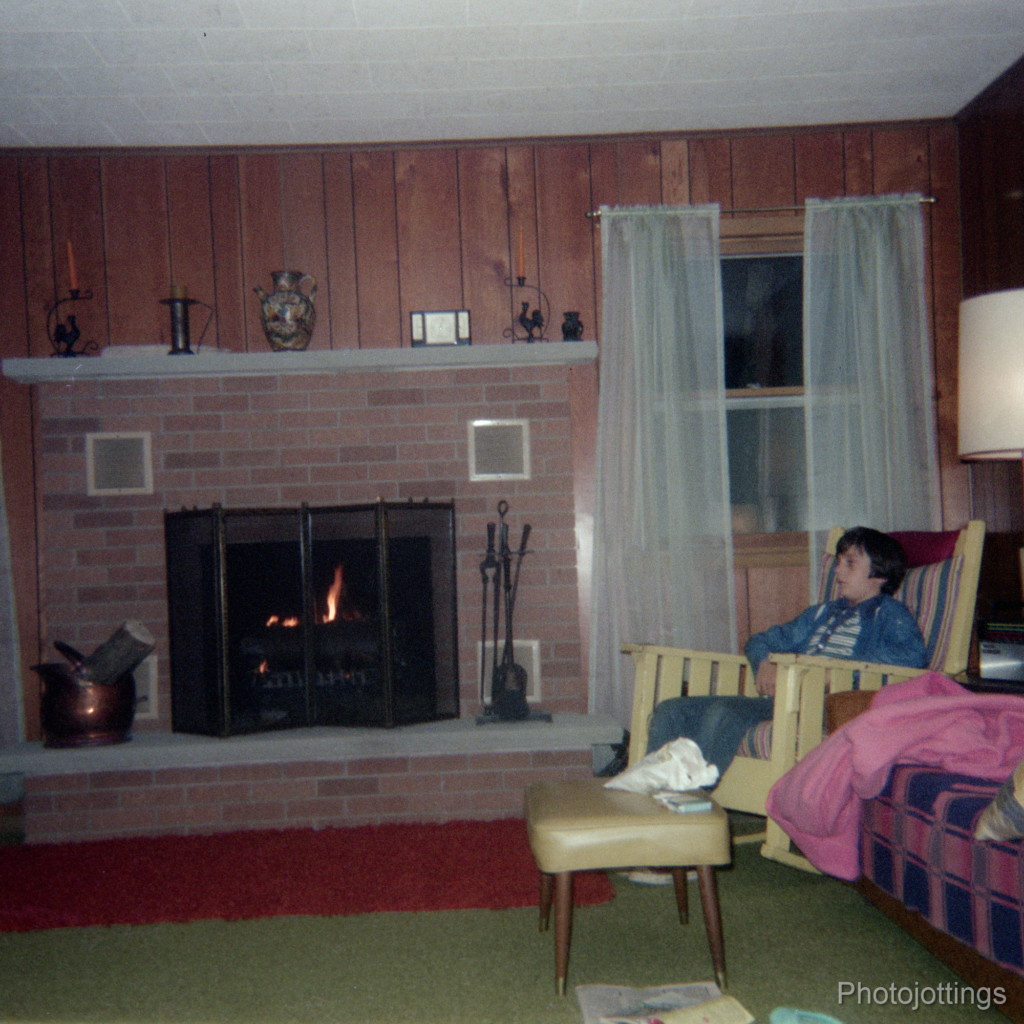 A color interior scene from the mid 1970s using the flash.  Those tiny AG1 bulbs do a good job of lighting up the room.  Kodacolor II. 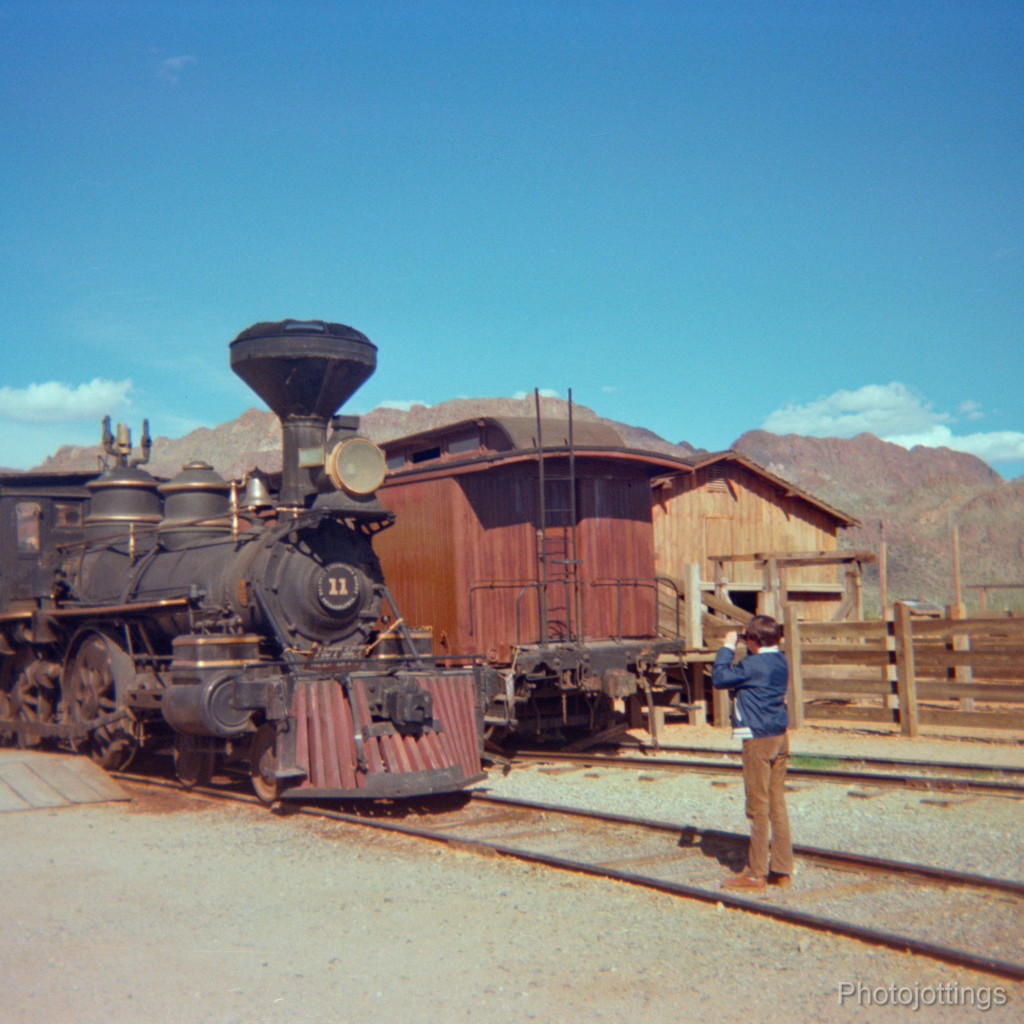 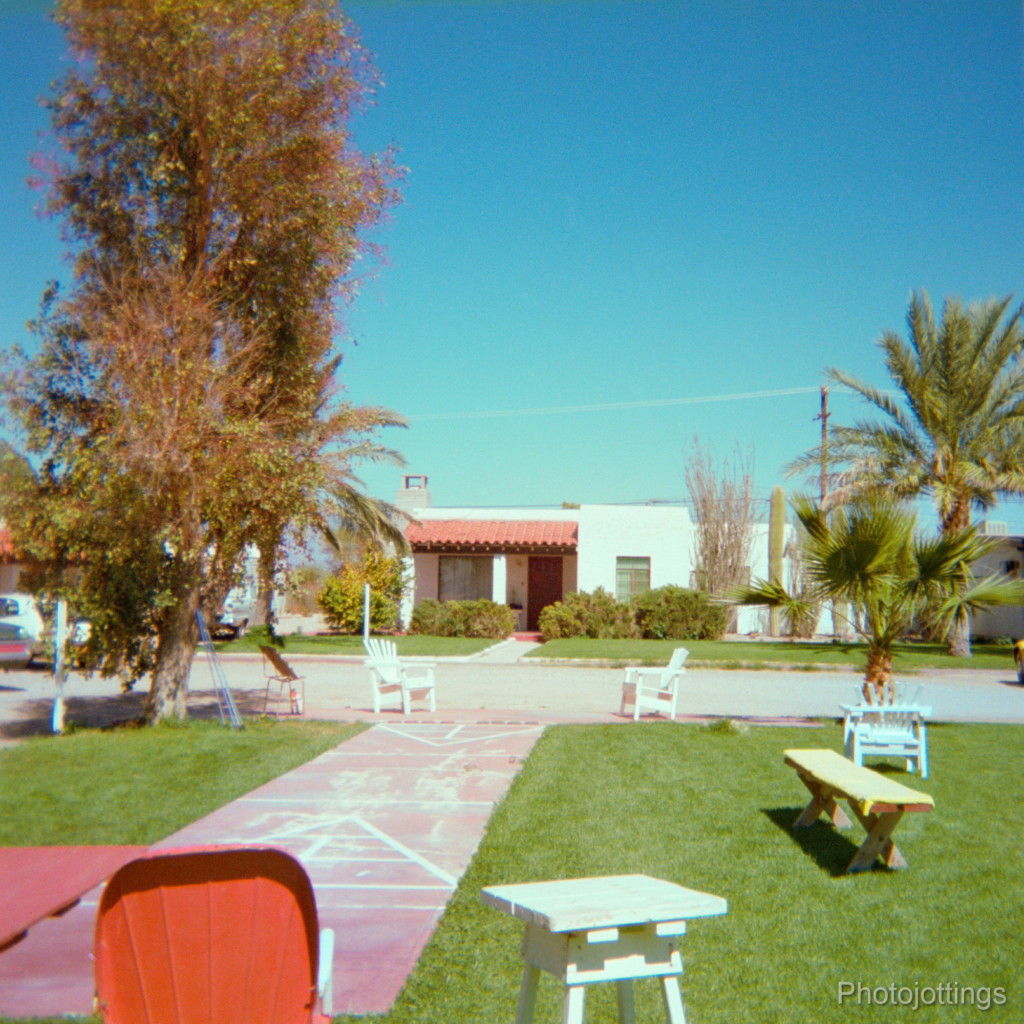 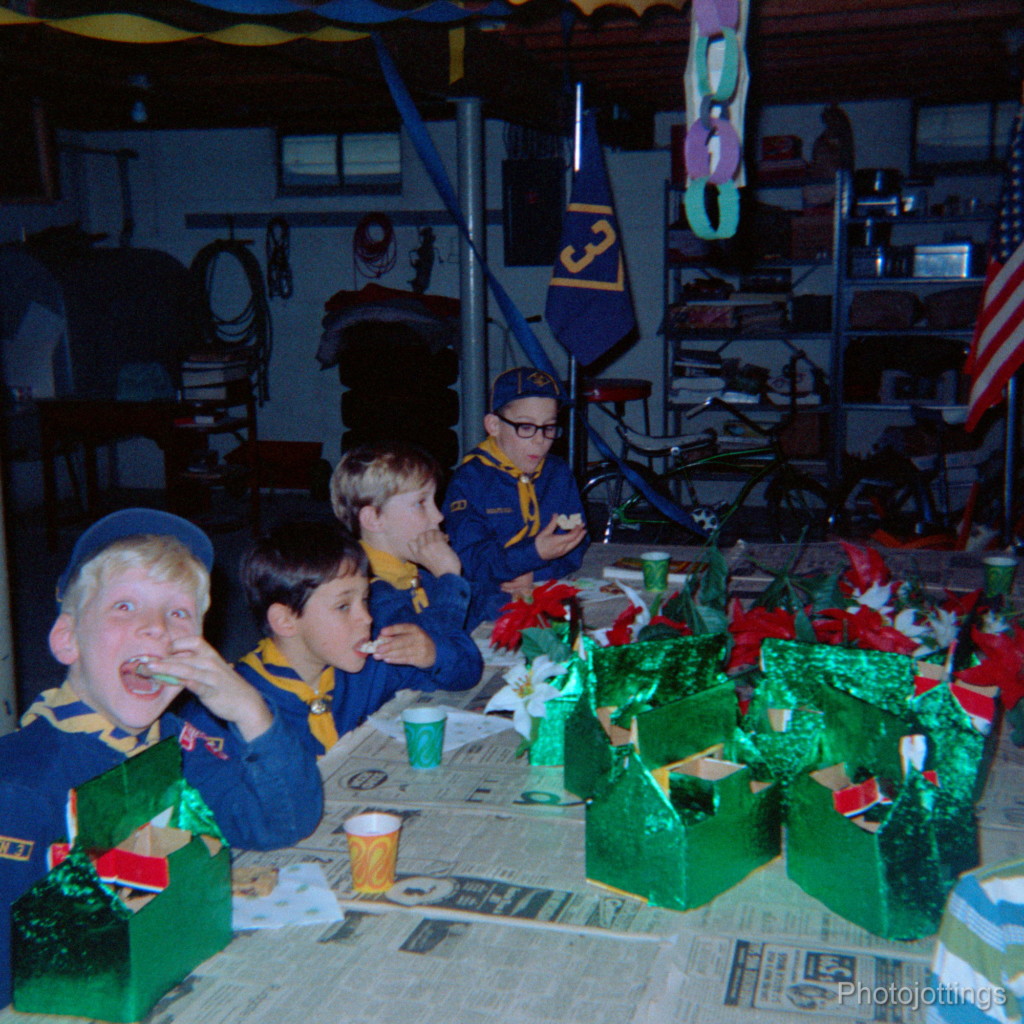 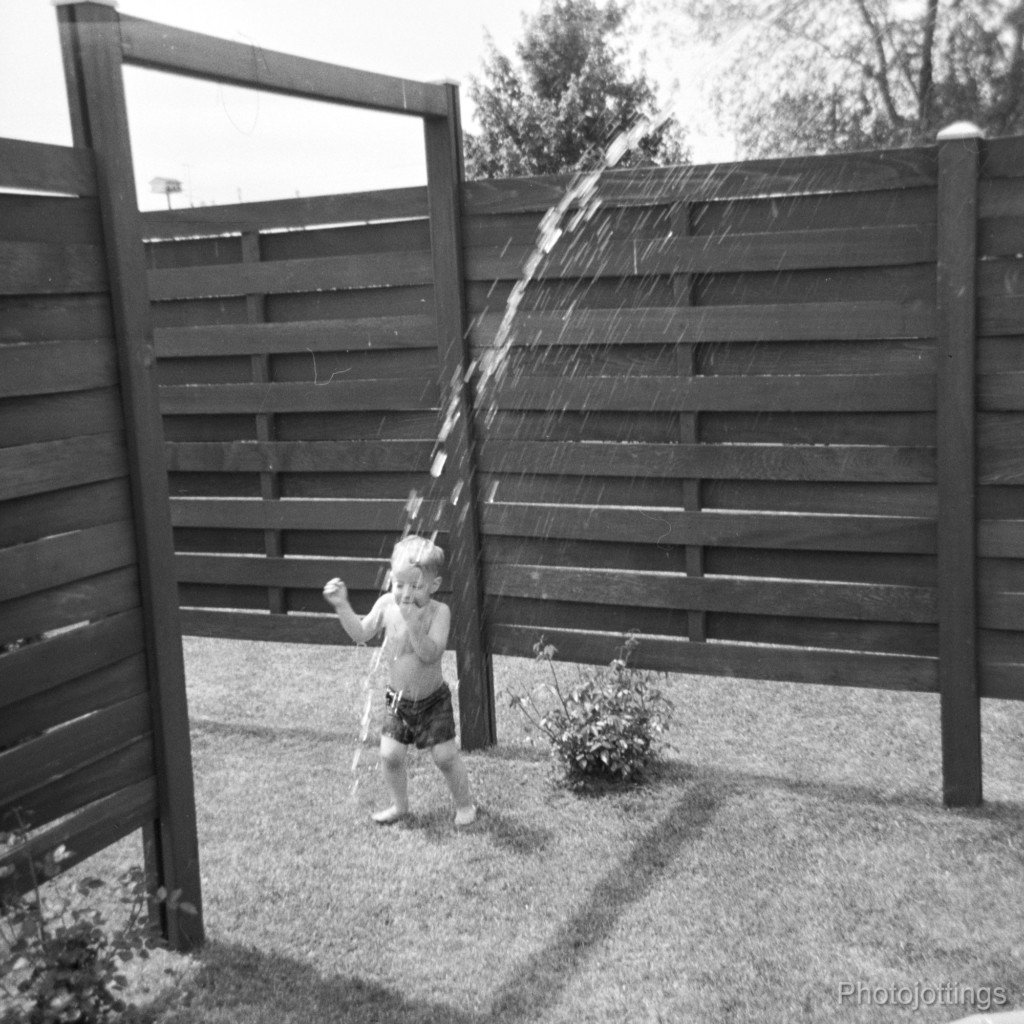 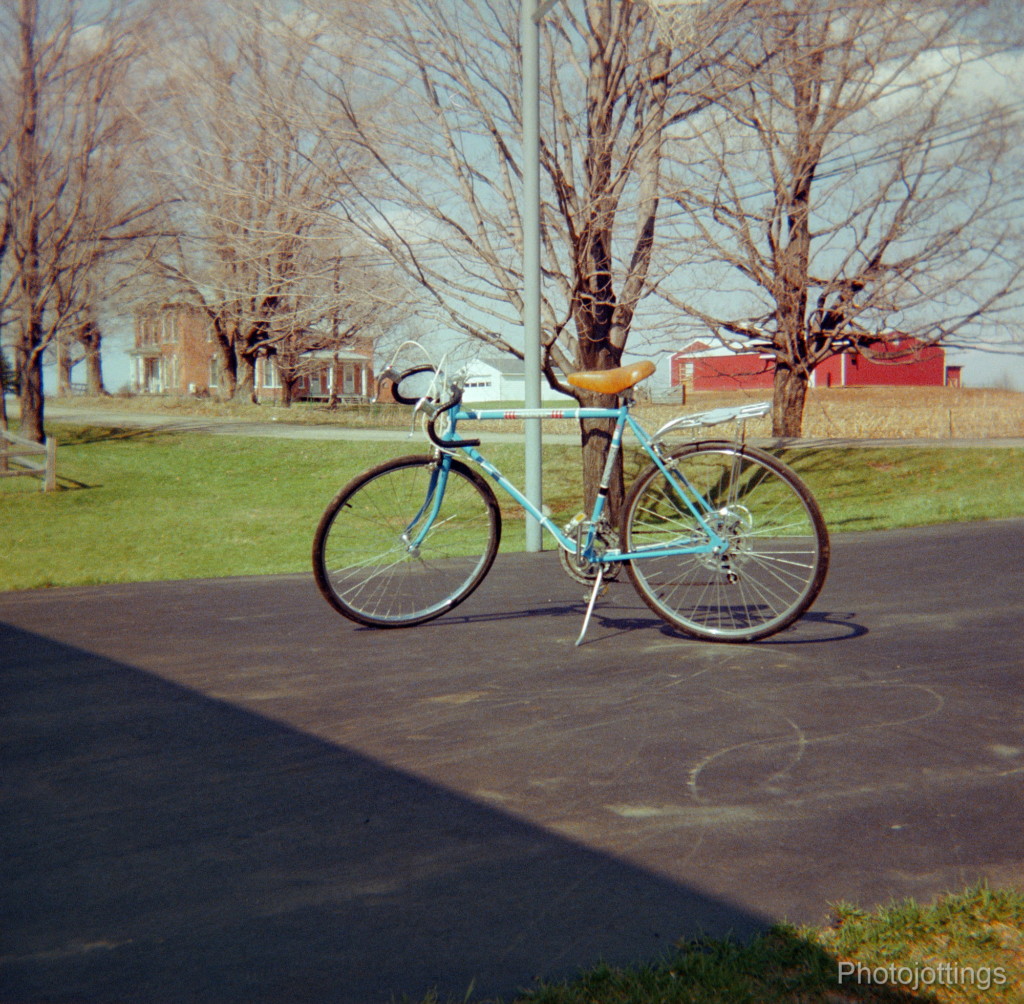 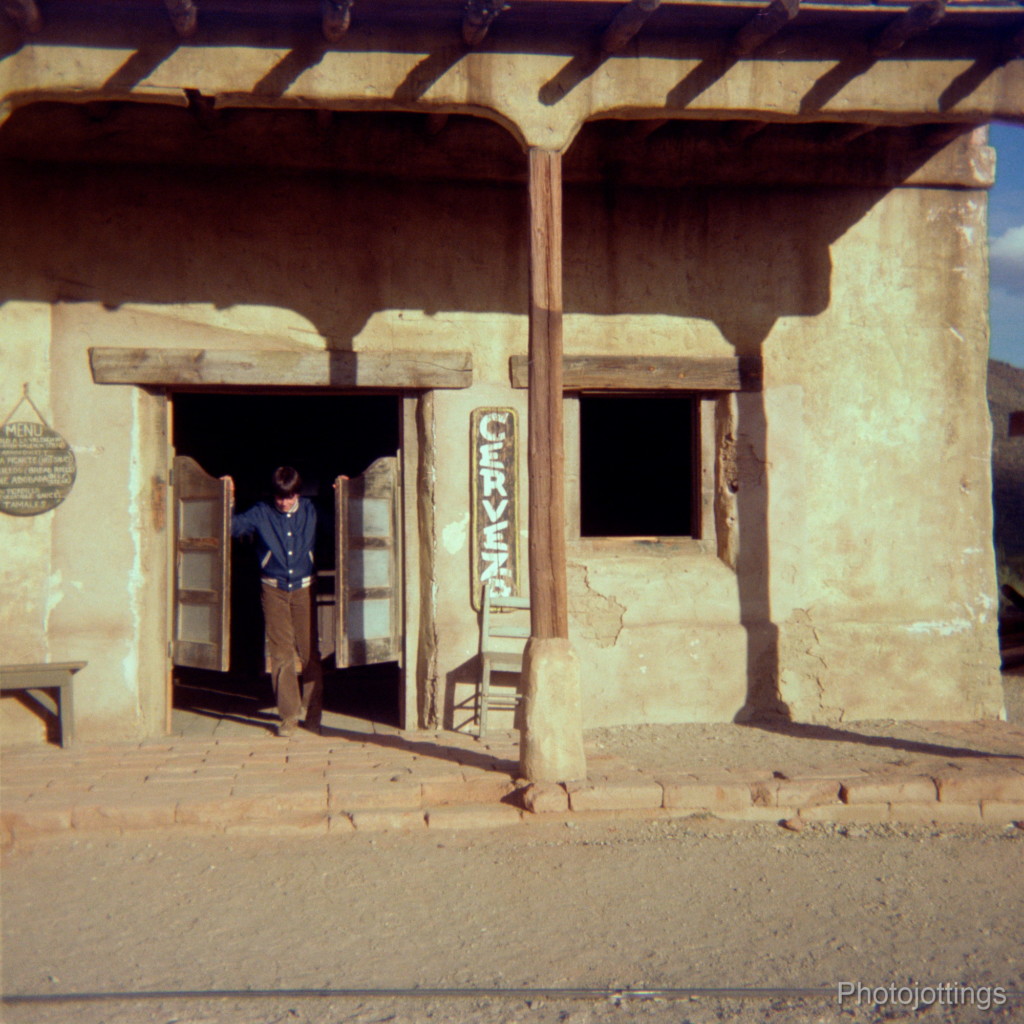 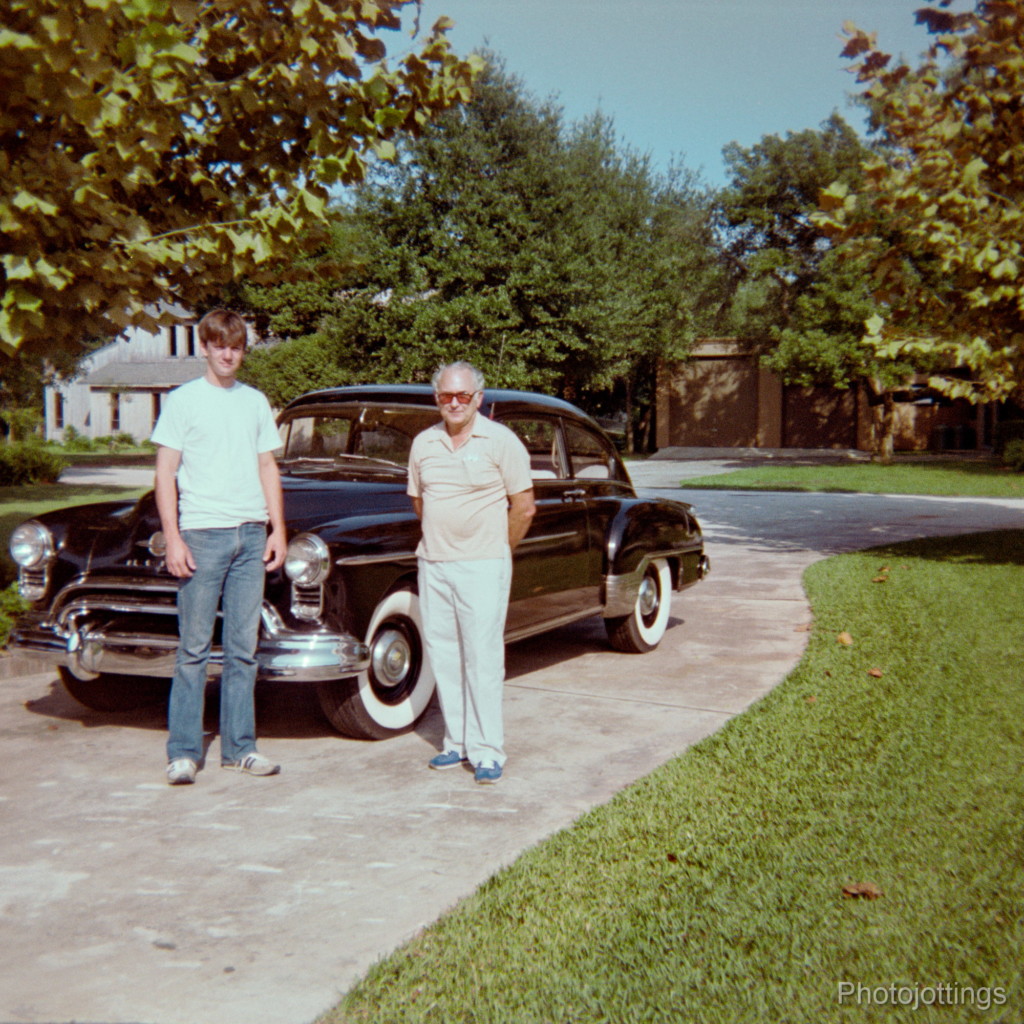 A 1950 Olds 88 Club Sedan in Windermere Florida, taken in 1982.  Gotta love those rose colored sunglasses.  We drove the car to Cape Canaveral, Kennedy Space Center for a tour this day.  The Space Shuttle Columbia was on launch pad 39a.  Kodacolor II.

As you can see above, the Kodak Instamatic 100 won’t win any high resolution awards today, but it actually takes some nice pictures if you don’t look too closely.  Of course, the instamatic 100 wasn’t the best camera for getting the most out of the 126 format, but it was easy to load, easy to shoot, and inexpensive to buy.

Funny, but as I looked over the images from long ago, and after careful consideration; I came to a rather ugly conclusion; I really think these 3″ prints contain about all the information I need to remember people and places, at least for snapshots, and if I want a little more detail, I can go back to the scan and print a little larger.  And I guess the burning question right now for me is; do I really need a $2000 digital camera and $1000 lens for taking snaps now days; I think not…  That’s one reason I’ve gone back to film!

So that’s it for the Kodak Instamatic 100; I enjoyed the trip down memory lane with the little camera, It was fun to get reacquainted.  I may try a cartridge of B&W I have that expired in the 1970s and will post the pictures if it happens.