The Ricoh YF-20 Super is, at least outwardly, an uninspiring fixed focus compact 35mm camera, with a three element lens, flash, and motorized drive.  However, upon close inspection, it has a really nice feature that makes this model stand out; there’s a sliding switch under the lens that allows you to focus the camera to longer distances.  The switch is spring loaded, so you have to keep it pressed while taking the picture, that way when you go back to taking snaps of family and friends, your focus is back to where is should be for sharp shots.  The real beauty of the infinity focus feature is that you can use wider apertures and still get crisp images, so no more having to stop the camera down to the ISO 400 or 1000 (small aperture) setting, and using expensive ISO 800 film to offset the close focus, depth of field conundrum of the typical cheap compact fixed focus camera.

The Ricoh YF-20 Super has a small 35mm F/4.5 triplet lens which exhibits strong field curvature wide open, and that means you can use the camera at the maximum F/4.5 setting and get sharp shots!!

Along with the ability to change focus, it has four different aperture choices which are labels as ‘ISO’ on the front of the camera.  Actually, if you include the maximum ‘flash on’ aperture of F/4.5, and change the ISO settings with the flash still on, you can get four additional aperture settings for a total of eight!!

With the intro finished, let’s do a walk-around of the Ricoh YF-20 Super.

Focusing; fixed, but will focus to infinity while holding switch.  Manual states from 3.3′ (1.0m) to ∞.  The lens is probably focused around 6 feet, or 1.9m without sliding the switch.

Approximate resolution; will make good 8″x 10″ prints at all settings when focused to appropriate distance.  Capable of excellent enlargements with ISO button at 200-400.

Lens; Ricoh coated glass three element in three groups, 35mm focal length, F/4.5 maximum aperture only when the flash is on with ISO switch at 100.  Oddly, the original Ricoh box has a matching sticker applied that says ‘included super close-up mode.’  I’m guessing it was a mistake by either the manufacturer or retailer because this lens doesn’t have any close-up capability.

Shutter and speed; mechanical two bladed shutter, with a tested speed of about 1/210s with a variation of 1/40s.  The owner’s manual says the shutter speed is 1/125s.

Color fringing; not much noticeable.

Accessories for this model;  none that I know of.

Crippling features and omissions; nothing really, it’s for super quick and easy snapshots.

Good features; five (ISO) apertures to choose from, flash, and infinity switch, so the camera is ready to shoot instantly. 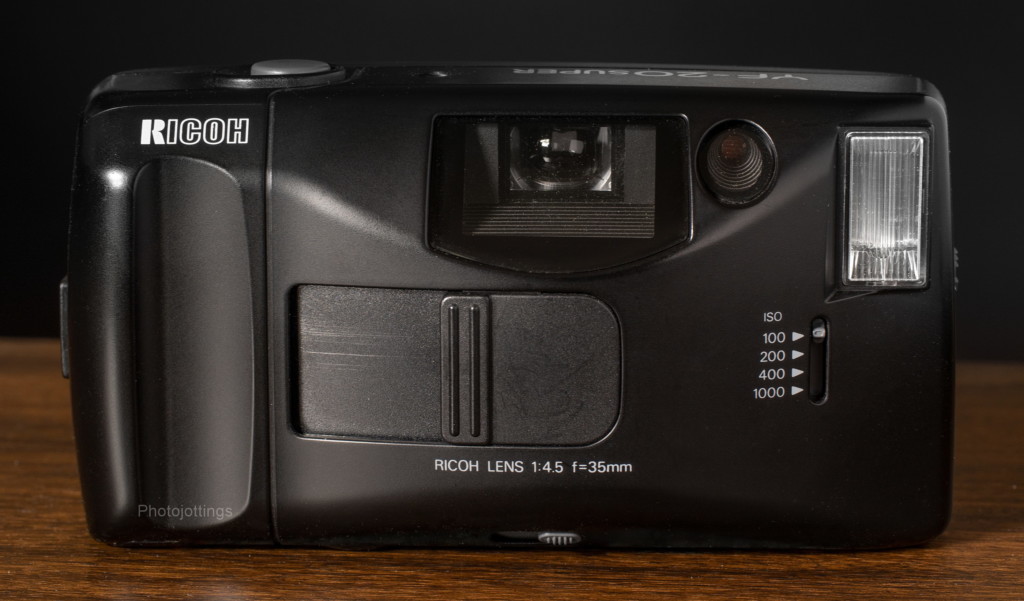 The Ricoh YF-20 has a sliding plastic door covering the lens; which also acts as a power switch.  To the right of the viewfinder is a little round CdS cell for triggering the low-light warning lamp, it doesn’t control the shutter which only has a single speed.  The ISO film setting are changed by sliding a tiny lever to the appropriate position.  The flash is fixed in the vertical orientation, and has decent output. 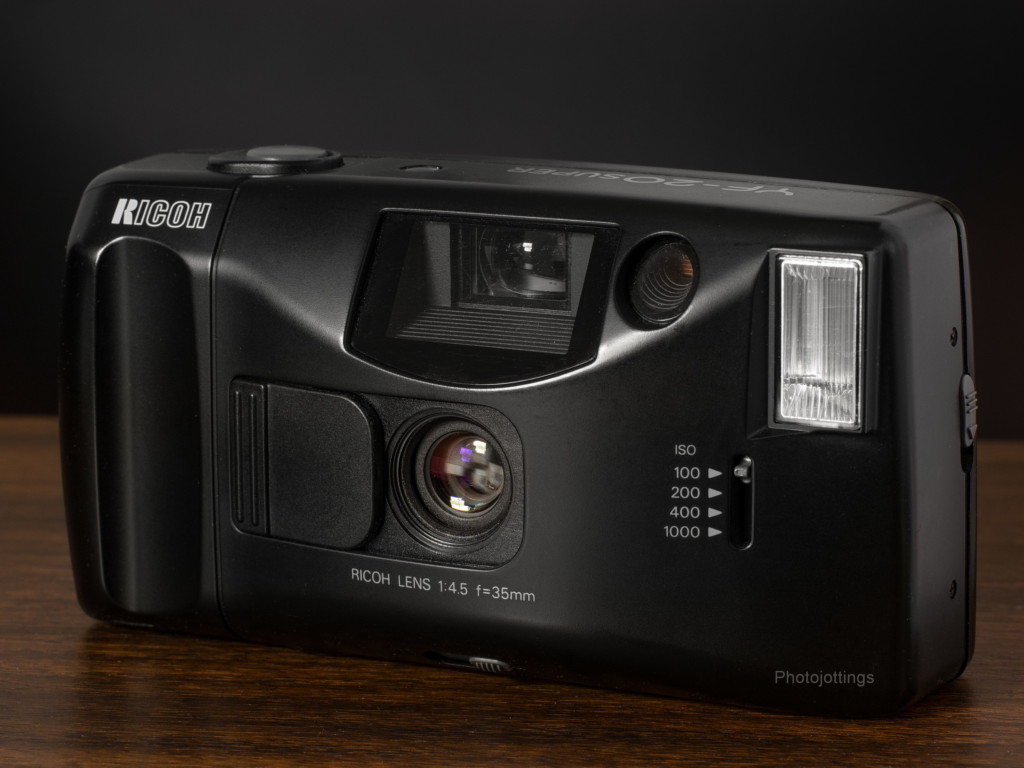 The Ricoh lens is a multi-coated three element in three group design with a maximum aperture of F/4.5, but only with the flash turned on, and the ISO setting at 100. 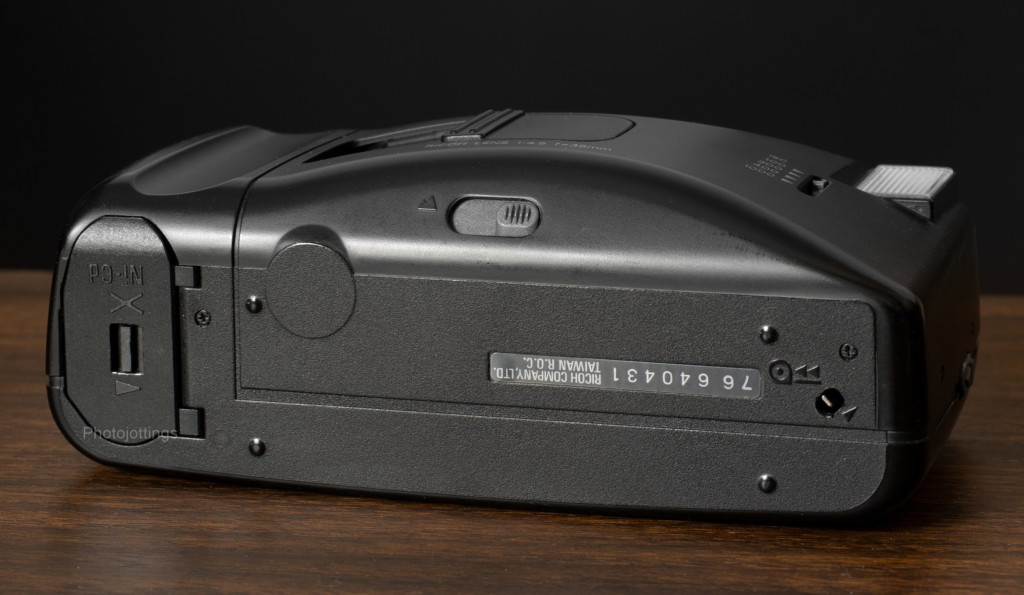 The bottom of the camera has an AA battery compartment on the left, a mid-roll rewind button on the right, and the gray infinity slider at the curve to the front.  You have to hold the switch while you take a picture, it’s spring loaded and will return upon release.  A workaround if you want to keep the lens focused at infinity; put a wooden broken off toothpick between the button and end of the slot, then tape it over, just be sure to release it if you want to take close pictures of your friends or family members.  Anything beyond about 15′ or 20′ (5-7m) will be sharp when focused at infinity.  The button can be pushed over to the halfway point if you really want to get fussy about your distances.  Not really important for normal people, but for technical nerds; The lens rotates slightly while moving back inside the camera about 1mm when the button is pushed all the way over to infinity.

There is no tripod socket on this model; but I’m wondering what the round protrusion (mounting pad?) is to the right of the battery cover; maybe Ricoh had plans for a tripod socket during development; or it’s for another model that shares this design. 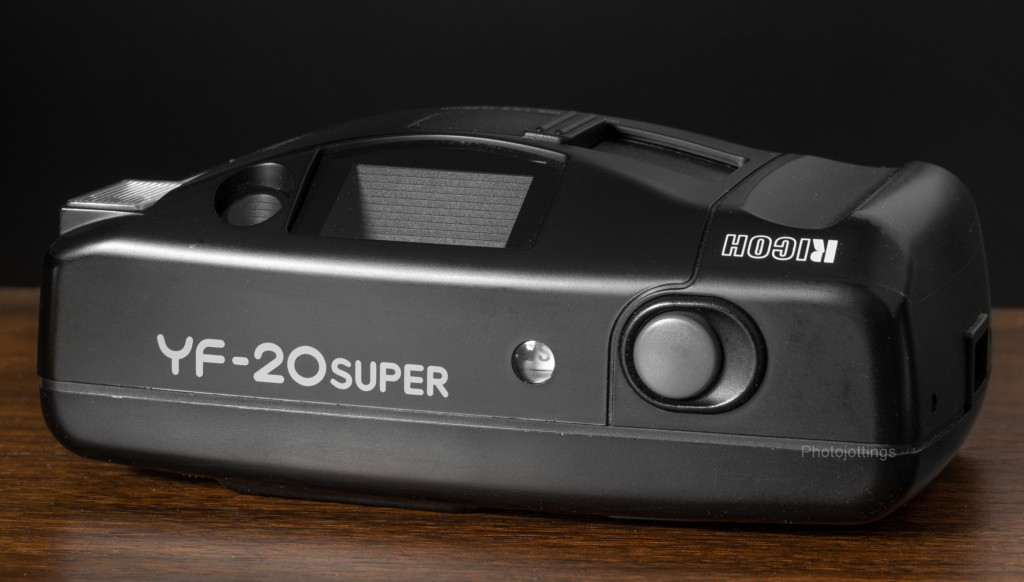 On top we have a gray shutter button, and the additive type easy to see shot counter with black numbers on a white background, which resets itself when you open the back. 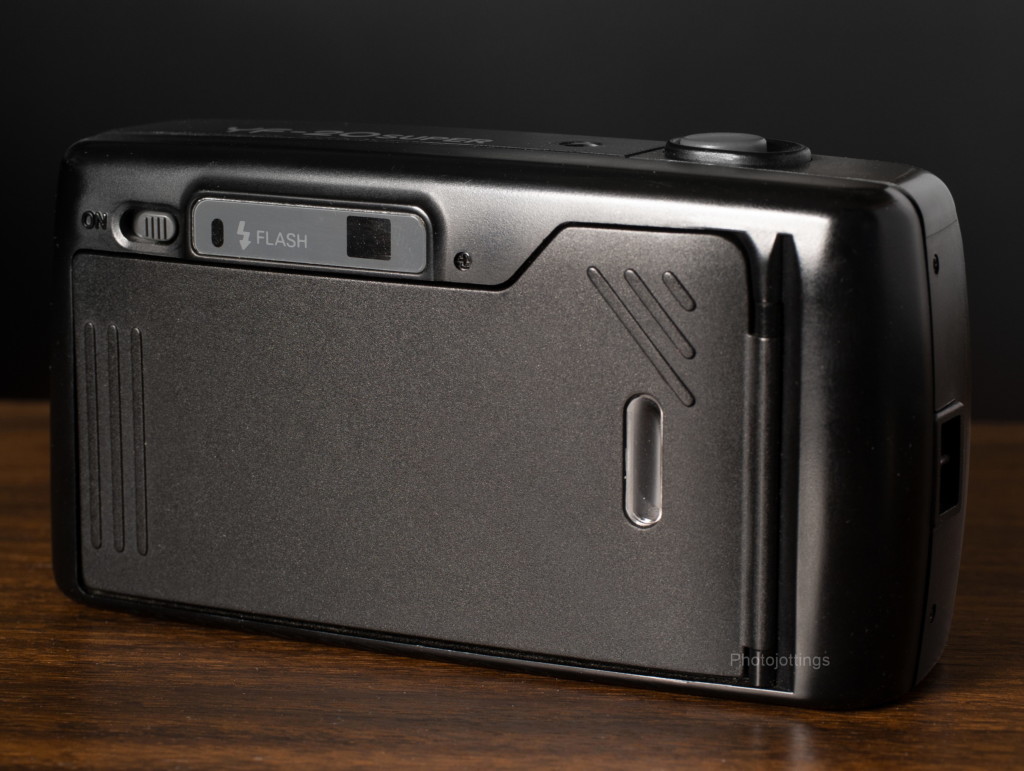 On the back side we have the viewfinder, which is sufficiently bright, with no guide lines, and an orange flash ready-light beside it.  The flash on-off switch is on the left.  The slot window on the back cover is for letting you know what kind of film is being used. 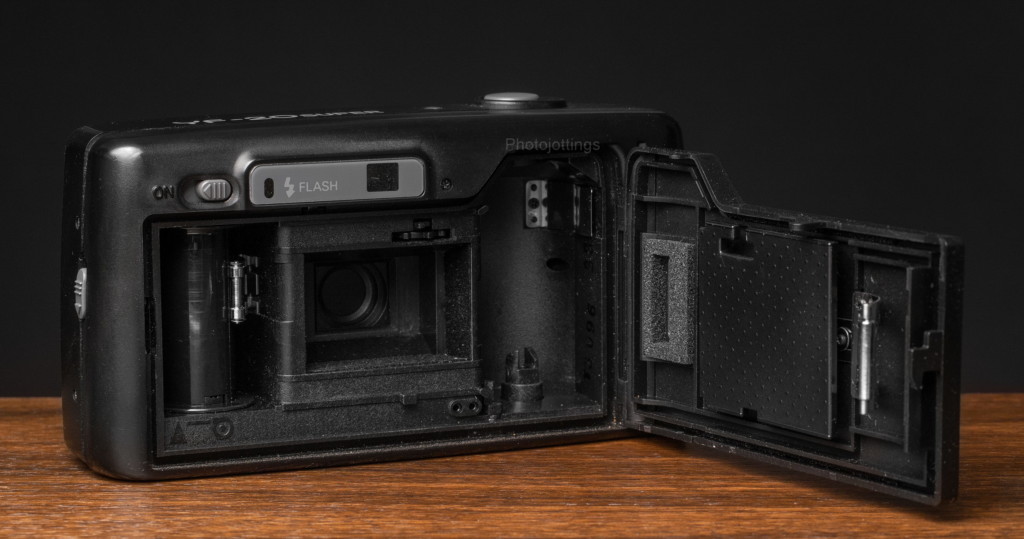 With the back open you can see the camera has some decent features like a real film pressure plate, a spring steel film tensioner and black felt inside the light chamber.  The only moltoprene is around the film reminder slot on the back cover.

Here are some test images scanned on a Nikon Coolscan 9000 ED.  All are 3000 pixels wide; there is no additional resolution from scanning at a higher sample rate.  Kodak Portra 400 film.  Click for larger images. 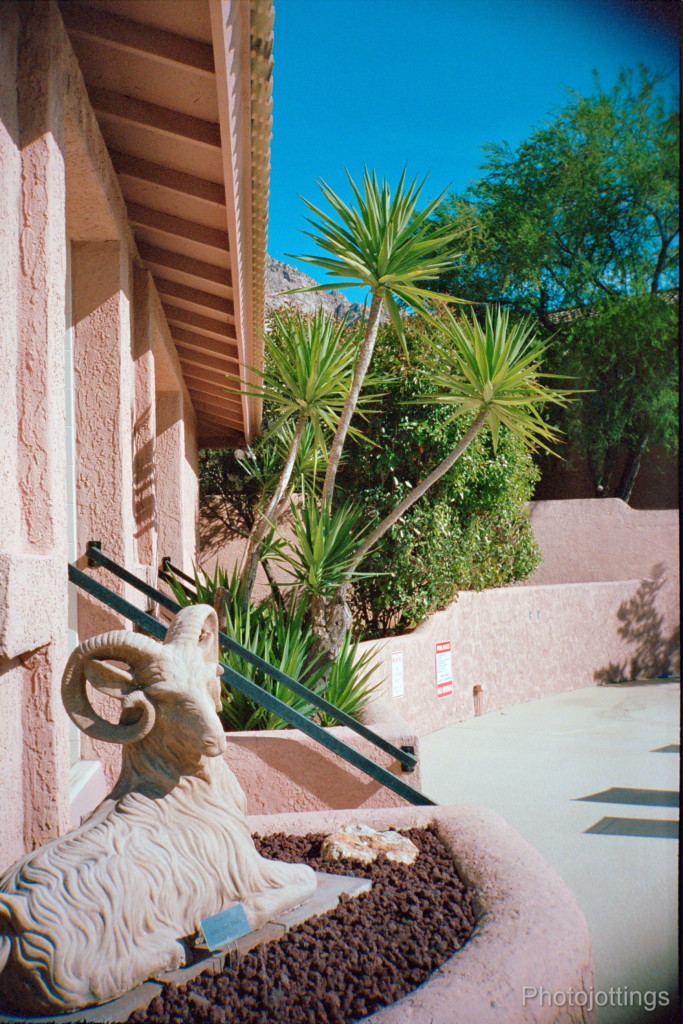 Ram at rest.  Infinity focus, and about ISO 400. I see some hard light fall-off in the corners.  A large depth of field here, the back mountains are sharp, as well as the Rams head. 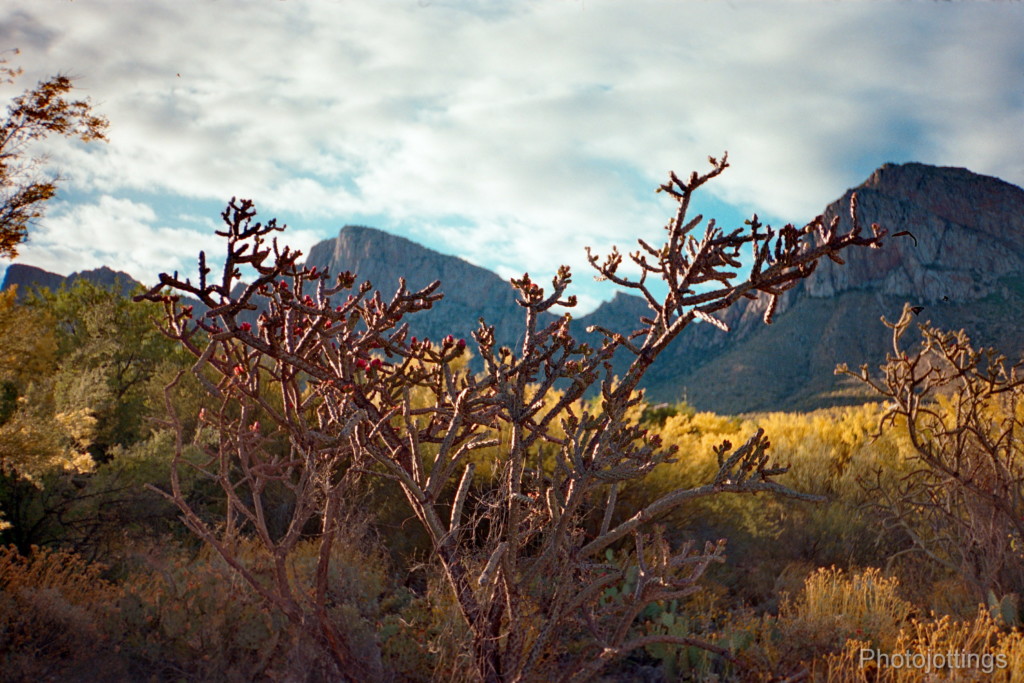 Cholla cactus about 10′ (3m) away at F/4 ISO 100 with flash on, close focus.   The cactus is sharp, and the background is decently blurred. 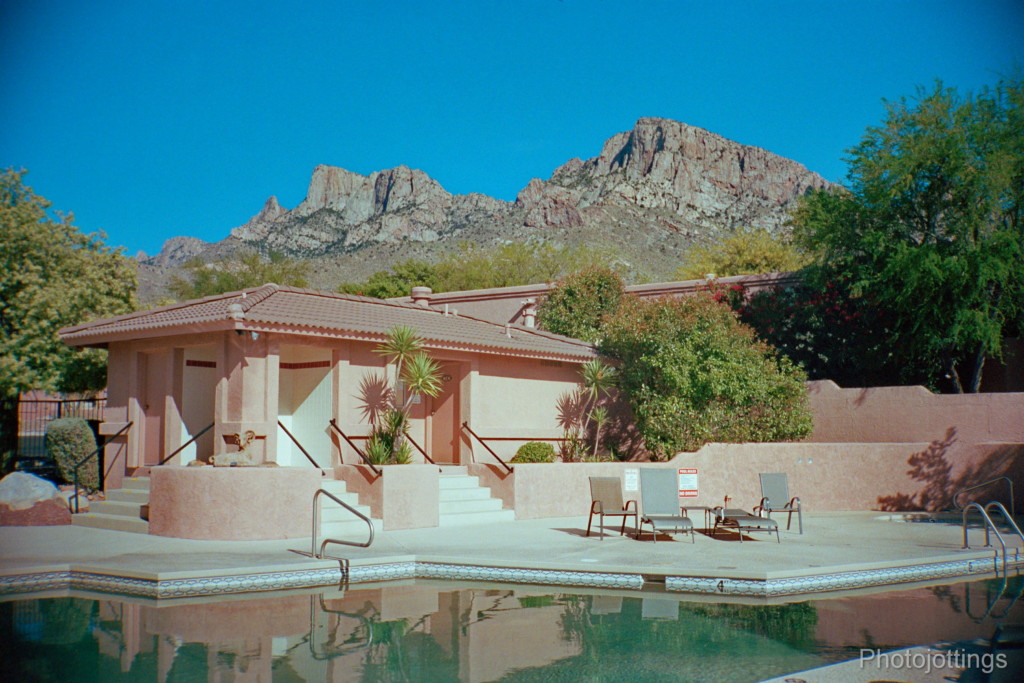 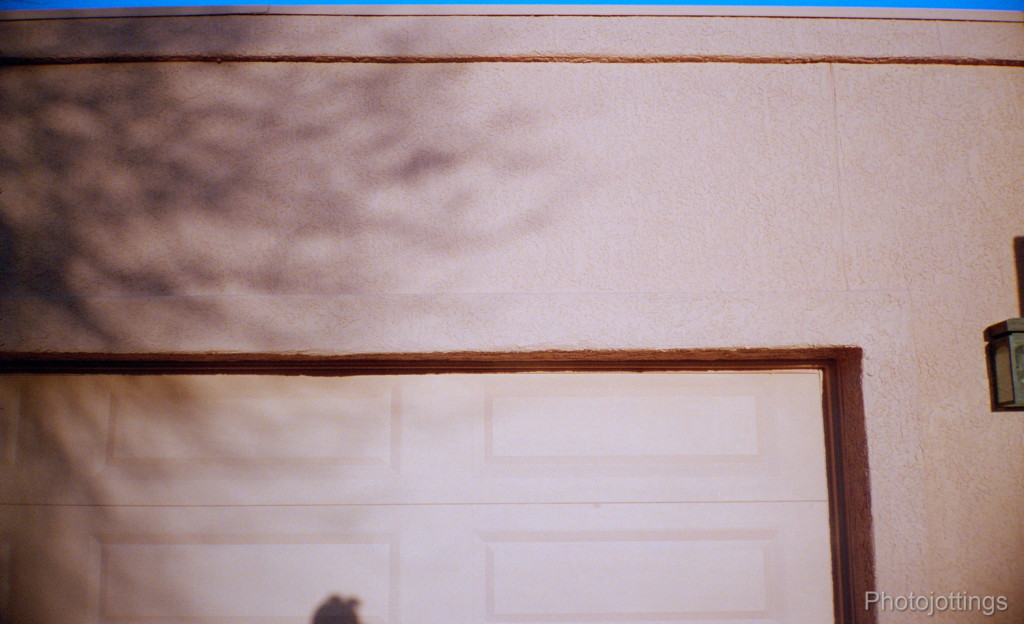 The top of the roof should be straight, but distortion is forming a complex wave, almost flat along the middle top, and then dipping towards the sides; this is typical of ‘fixed’ focus type of lenses. 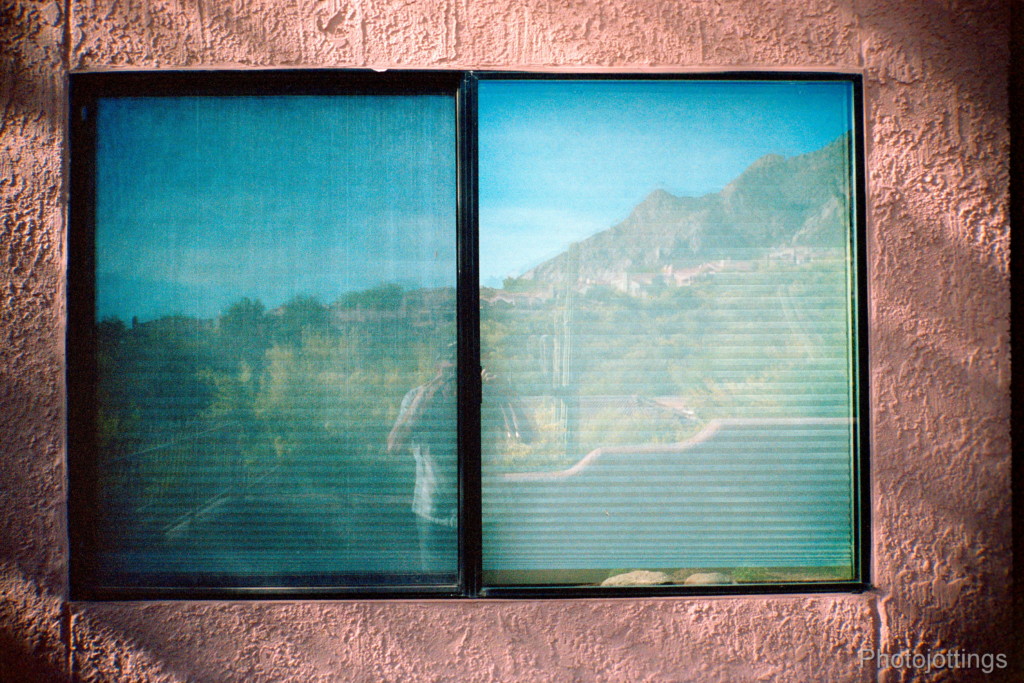 Test shots at different apertures.  Scanned on a Nikon Coolscan 9000 ED.  All are 3000 pixels wide; there is no additional resolution from scanning at a higher sample rate.  Kodak Portra 400 film.  Click for larger images. 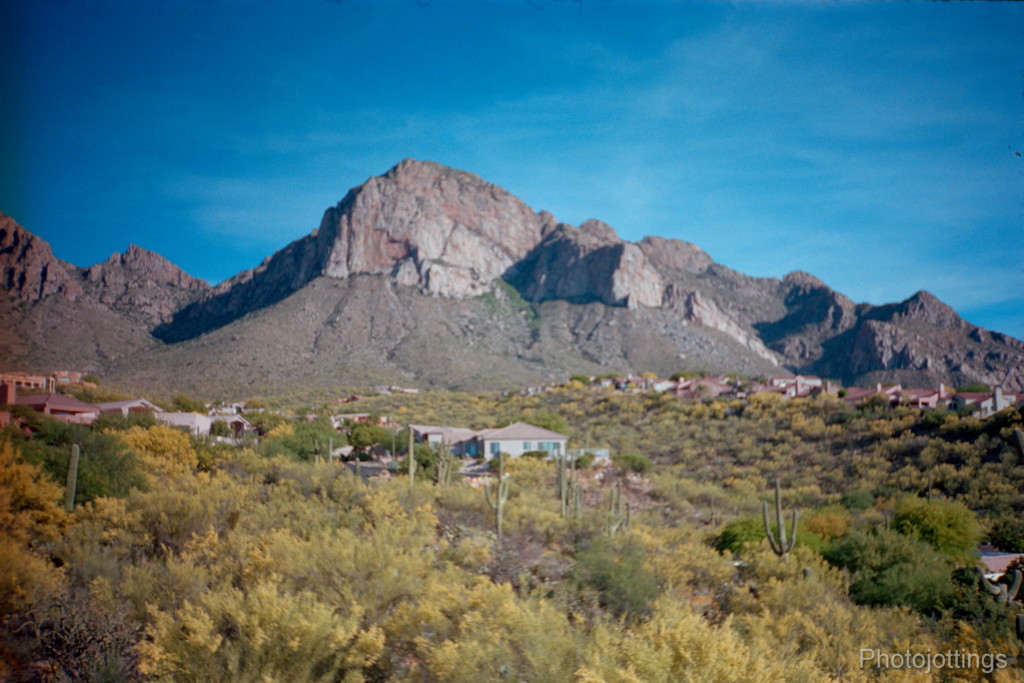 This image was taken with the flash on, and the ISO set to 100,  the effective aperture is F/4.5.  The infinity switch is not being used, so the focusing distance is fixed at about 6-8′ (1.9-2.5m). As you can see, it’s really soft when taking landscape type shots, however, if you move the focus slider to infinity, the shot is much sharper, see below.  Also notice the sides are a little sharper than the centers; that’s a result of field curvature of the lens; which shows up at wide apertures. 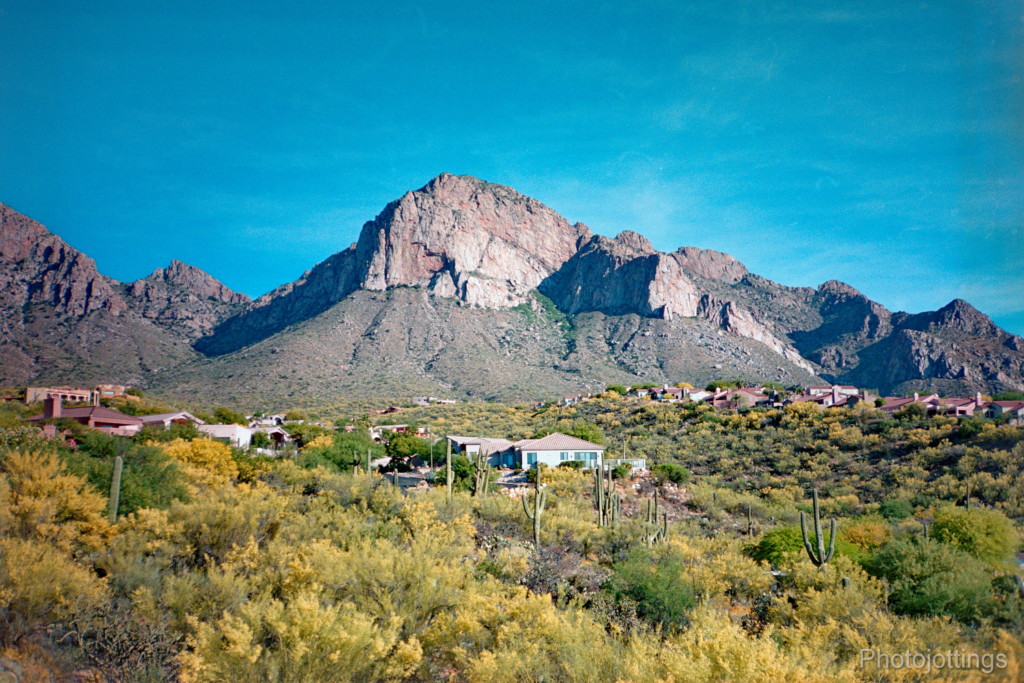 The flash is still on, with the ISO set to 100, now the focus switch is pushed over to infinity.  Here the aperture is still F/4.5, but it’s much sharper than the closer focus shot above. 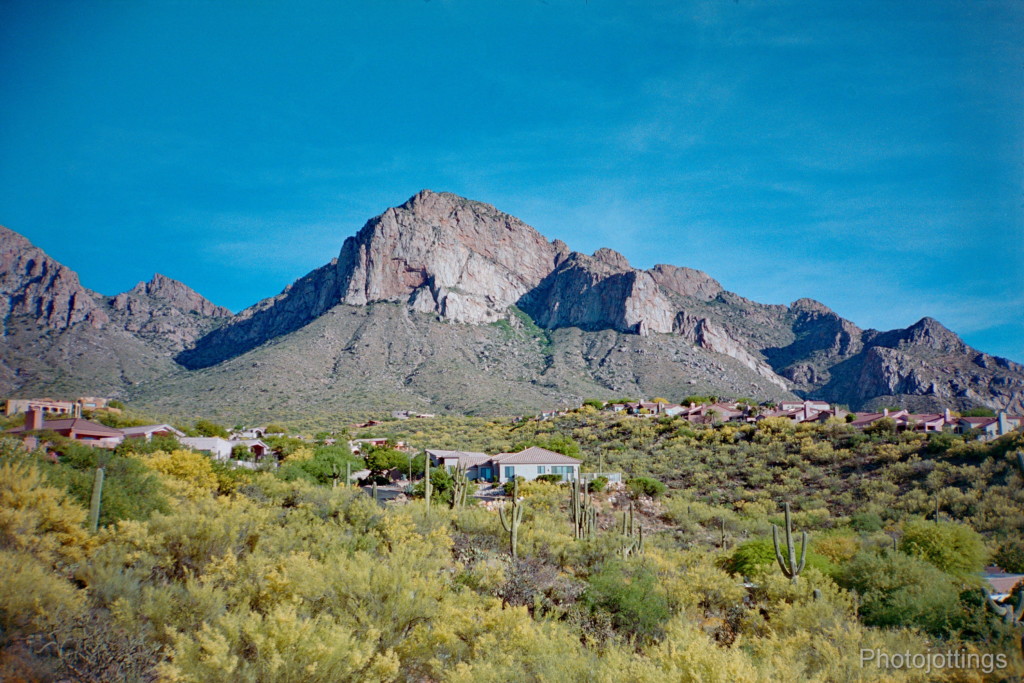 With the flash turned off, and set to ISO 100, (approximately F/8) there is a bump in sharpness over most of the image. 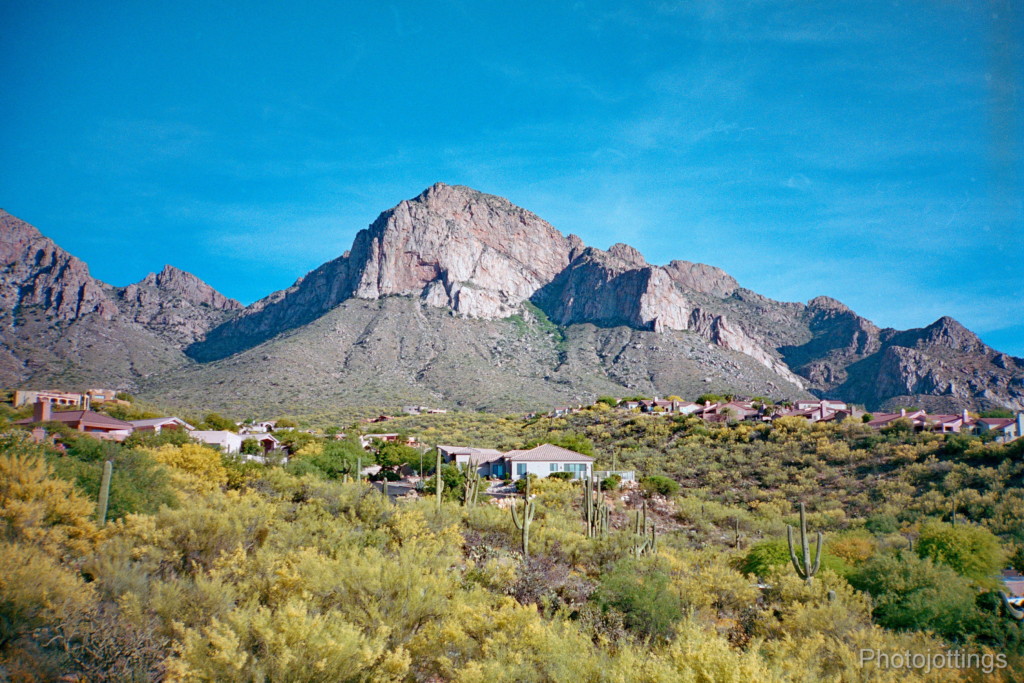 In this image I’ve set the ISO slider to 200, the aperture is now about F/11.  The image is quite sharp in the whole central area, and it would make an excellent 8×10″ print. 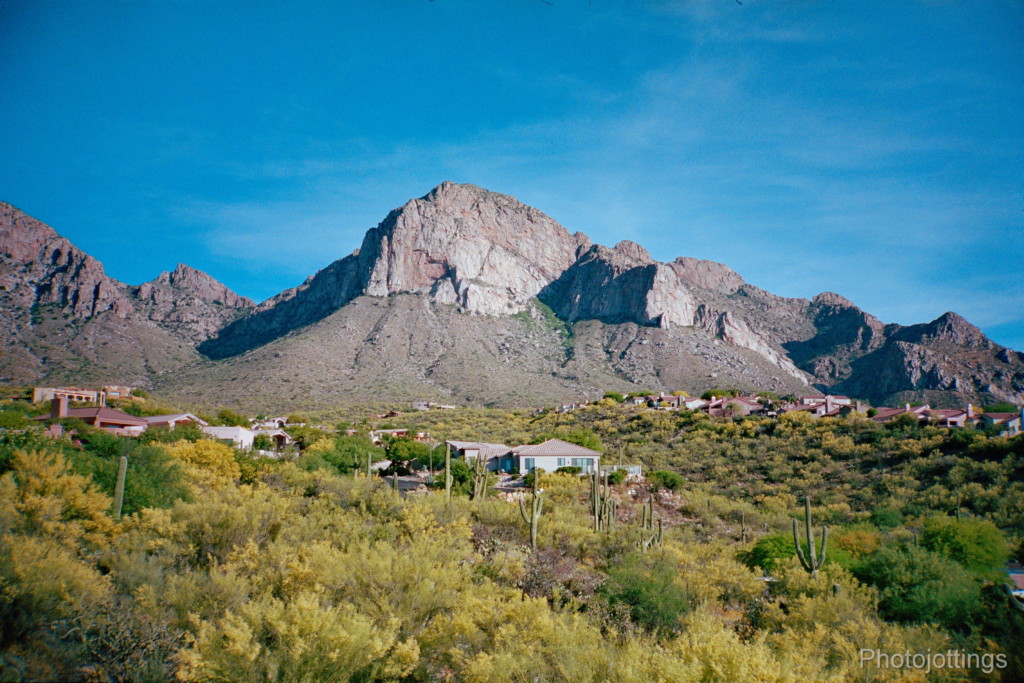 At ISO 400, or approximately F/16, the images starts to soften a bit from diffraction. 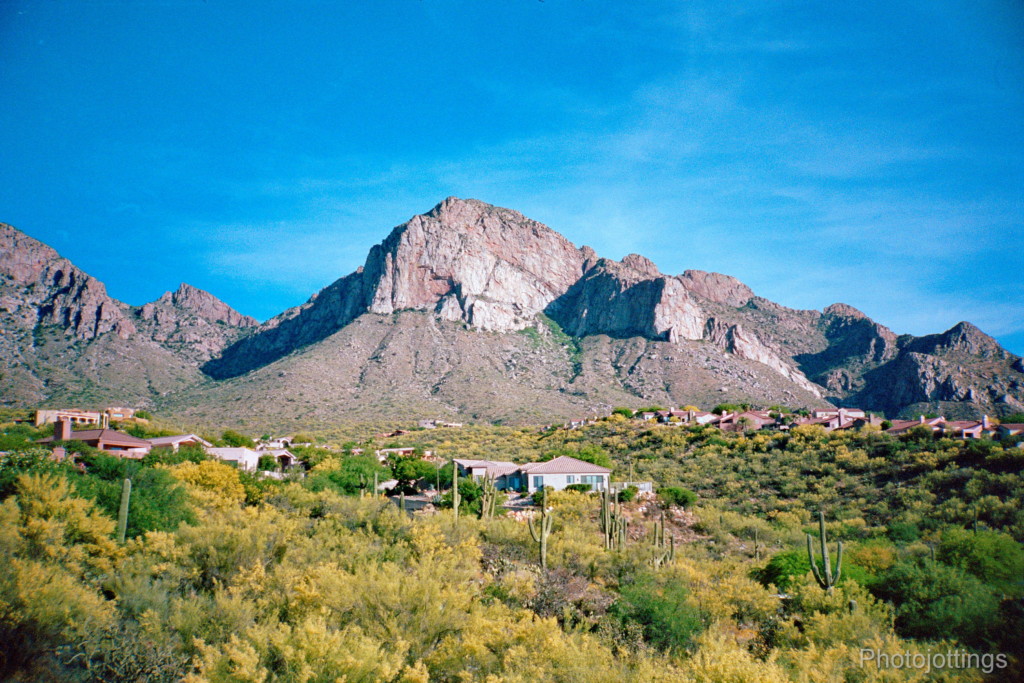 Softening diffraction is noticeable here, especially in the central area, with dark shadows from the very small aperture and 1/200s shutter speed; ISO 1000, or approximately F/22.

I’m continuously looking for that perfect always-ready, no-fuss compact camera, one that won’t miss focus, under or over expose, and uses common AA’s for the flash, and motorized drive; so is the Ricoh YF-20 Super the one?

First off, when we describe a typical compact fixed focus camera from the 1980s, it usually means that it has no focus adjustments, and maybe two aperture or ISO (100/200-400) settings, along with a flash and motorized drive; any additional features and we get into the ‘high end’ fixed focus category, which I think the Ricoh YF-20 Super is in.  However, with that said, the Ricoh isn’t really a fixed focus model, but it can be if you don’t want to fool with the infinity focus slider.

Most fixed focus cameras have the focus point at less than 10′ (3m), this is because the manufacturer figures you’ll mostly be taking pictures of family and friends and using the flash, so that short distance makes sense; but what if you want to take some shots of distant mountains, or anything more than 20′ (6m) away?  Well tough luck at wide apertures, your shots will be quite blurry when you look closely, but at small print sizes you might be ok.  In order to get sharp shots from these cameras you have to stop down the aperture for a greater depth of field.  You do that by using the ISO settings on the camera, the higher the number, the smaller the aperture.  I usually recommend the ISO 400-800/1000 setting, and using ISO 800 speed film, which is getting quite expensive now, darn it.

Thankfully, the Ricoh YF-20 Super has a slider that allows you to hold the focus out to infinity while you take the shot, thus eliminated the problem of having to stop down the lens to a tiny aperture, (just to get sharp shots), that you lose the ability to capture enough light for the beautiful early morning or late afternoon outdoor scenes.  The Ricoh YF-20 Super is very impressive when taking landscape pictures at F/4.5 at infinity focus, and at that aperture you can use inexpensive ISO 100 and 200 film.  But you do have the option of not fooling with the focus, and just shooting with the lens in the ‘fixed’ position, just like the Canon Snappy 30, or Kodak Breeze that I tested, and both are quite sharp stopped down hard.  Of course the lenses on these cameras are inexpensive; the color and contrast are not the greatest, but that’s expected in this category, and the only real negative aspect in my opinion.

In the end, the Ricoh is the best by a wide margin out of all the fixed focus compacts that I’ve tested so far at wide apertures, thanks to the infinity switch.