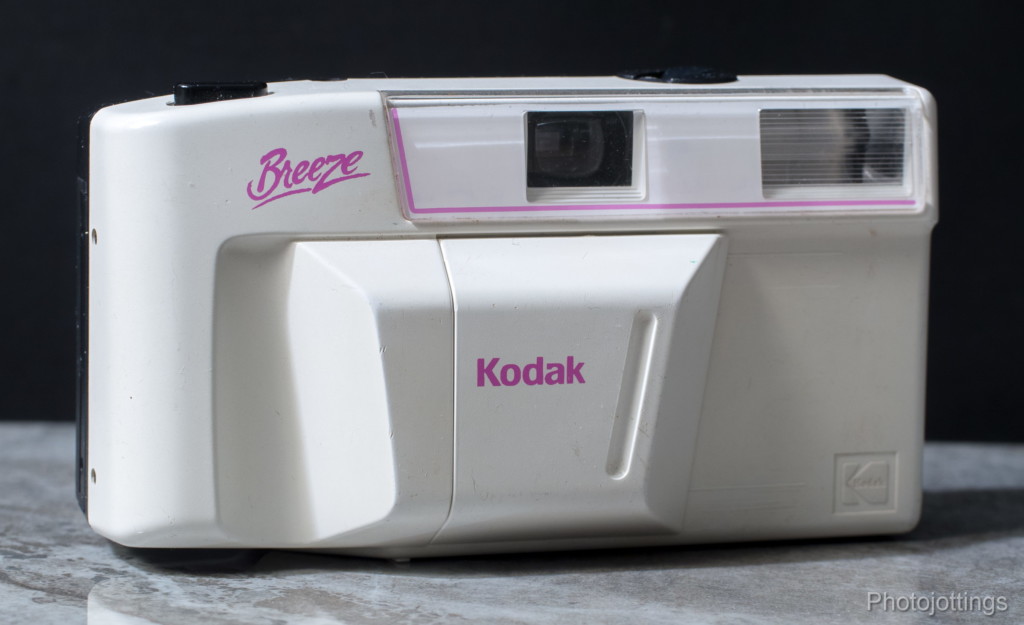 Snapshots are a breeze, with the Kodak Breeze!

The Kodak Breeze, (S100EF or Euro-35) was a budget friendly camera that used bold color schemes and simplicity to attract customers, and probably sold by the millions at K-Mart and Walmart back in the very late 1980s into the early 1990s.  There are more color combinations for this particular camera than you can imagine; white, black, blue, and red bodies, some with different colored buttons.  Our review model is white with pink accents, and is often referred to online as the ‘Hello Kitty’ camera.  Kodak wasn’t satisfied with just a bunch of goofy colored cameras, so they tried to advance the status a bit from our cartoonish model, to evoking Parisian sophistication and grandeur in another model using the name ‘Élysées,‘ with an elegant cursive font, and faux mother-of-pearl finish.

The picture quality, operating characteristics, and dimensions of the Kodak Breeze are similar to the Canon Snappy 30, except the Breeze has no winding motor, it’s all manual, so you don’t need any batteries unless you want to use the flash. The Kodak Breeze is a very inexpensive model, but it’s capable of taking good pictures with the right film and settings.  I really appreciate the small size; it’ll actually fit in a shirt pocket without sagging, (like a pack of smokes) as it’s so light-weight, especially without batteries.

This popular snapshot camera from three decades ago set me back about $2, and it still works just fine.

If you’re bored at work, and looking to goof off for a few minutes, scroll on down for the review; and pretend you’re ‘somewhere in time.’

Price; Kodak site says the retail price was $59.95; but street price was probably less, maybe $49.95.  Current eBay prices range anywhere from $5 to $15 and even less at garage sales.

Build material; appears to be mostly plastic, with a build quality slightly better than a disposable camera.

Box contents; Camera, Kodacolor film, ASA 200 24 exposures, two Kodak ‘Supralife’ AA batteries, wrist strap, warranty card and instruction manual in multiple languages.  Some may have been sold in a blister pack, and if so, probably came with the same contents as the box.

Focusing distance; Kodak recommends 4′ (1.2m) to infinity, but I’d stay about 8′ from the subject for best results.  Fixed focused at about 10′ (3.5m) based on the sharpness distance from the images below.

Viewfinder; reverse galilean type; no frame lines; about the same as a disposable camera.

Approximate resolution; will make excellent 4×6″ prints at all settings, and good 8×10 pictures with 800 speed film set at ISO 400.  See sample images farther down the page.

Accessories for this model;  none.

Good features; no batteries required, sliding lens cover, and it’s easy to use. 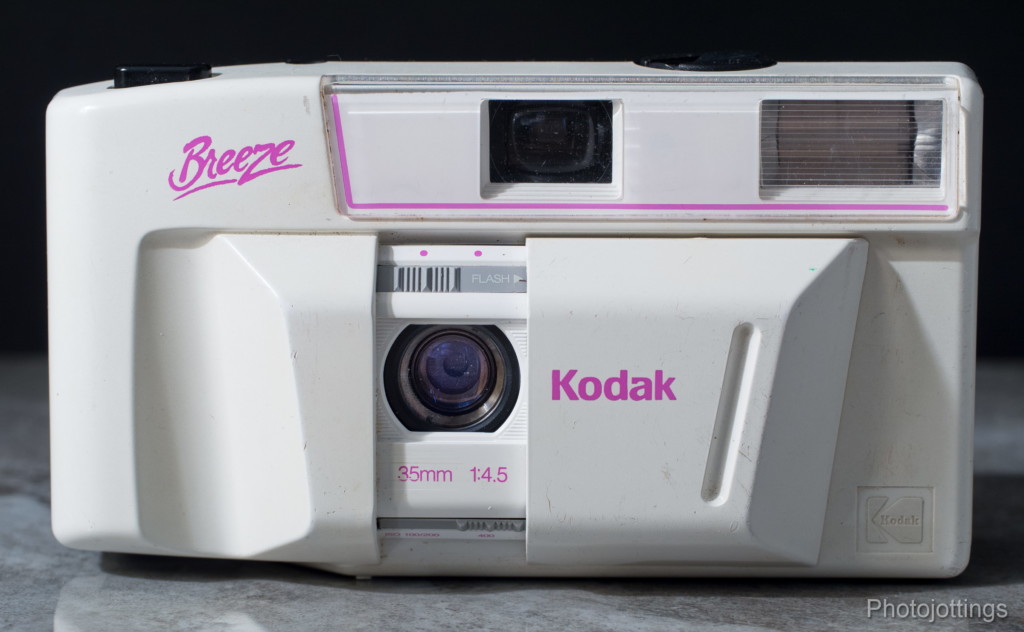 The camera front features a sliding lens cover, a flash, two ISO settings below the lens, (click pic for larger view), and a viewfinder that’s actually pretty bright and easy to see through.

The manual rewind lever is on the left. The little round counter shows the number of shots, but only even numbers beyond 1,and it stops counting at 36; dots fill in the odd numbers.  On the right is a stadium shaped shutter button.

With the back opened, you can see the film pressure plate, a light seal around the reminder window, and the film compartment.  The silver metal rectangle is the film take-up spool tensioner.  There is no DX coding, so you have to set the ISO manually from a switch below the lens on the front of the camera.  In this view you can see the thumb wheel film advance, flash ready light, and the reverse Galilean viewfinder.

From the left are; wrist strap holder; rewind button, and the battery compartment that holds two AA batteries for the flash. 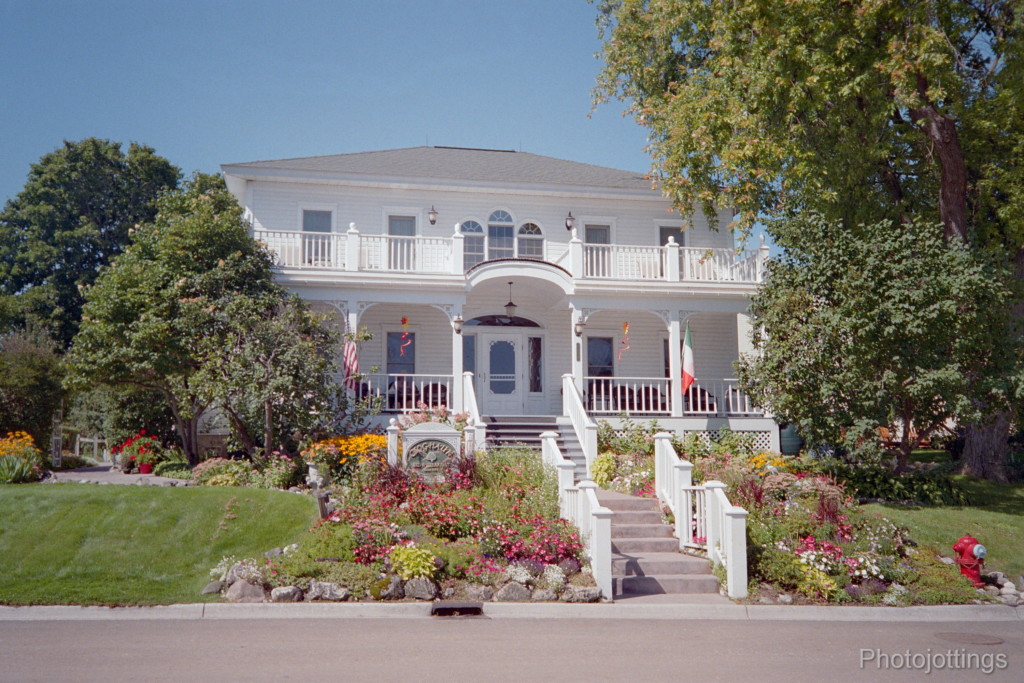 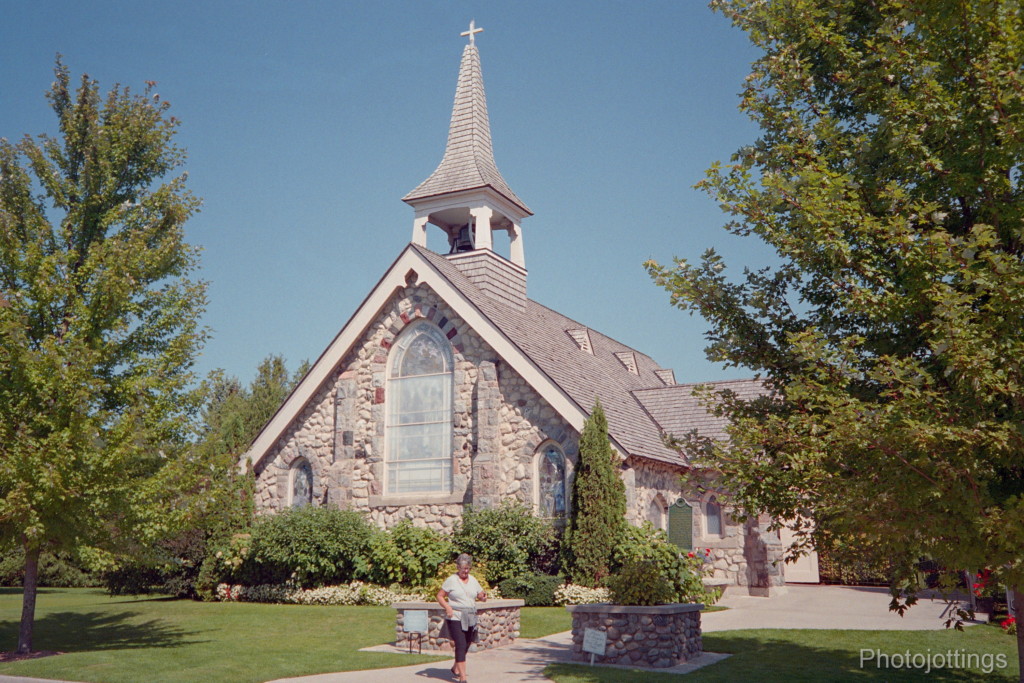 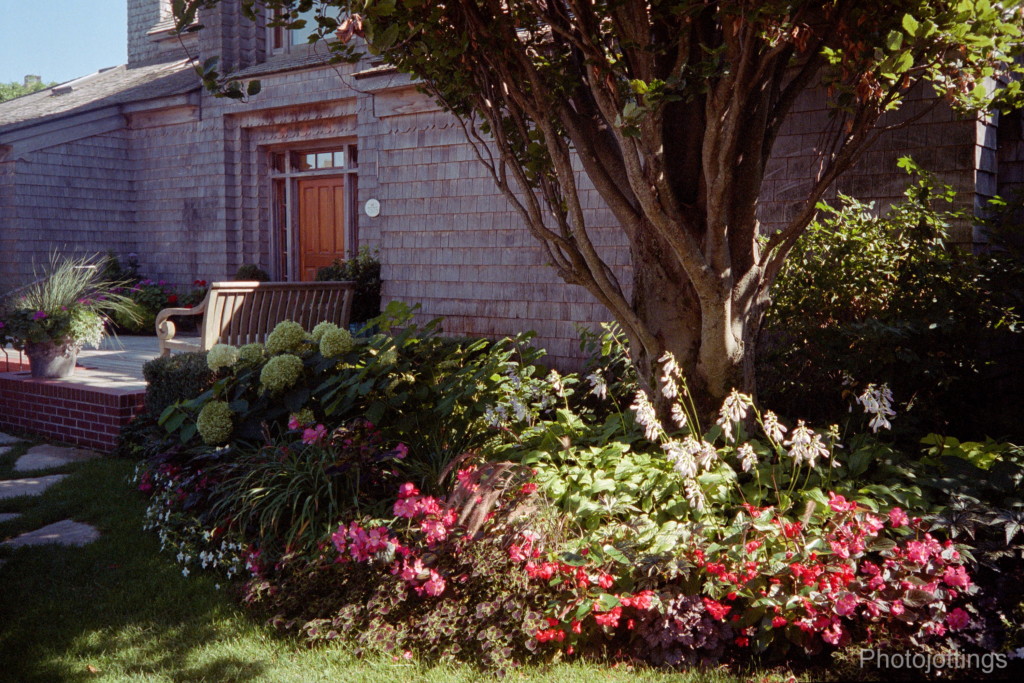 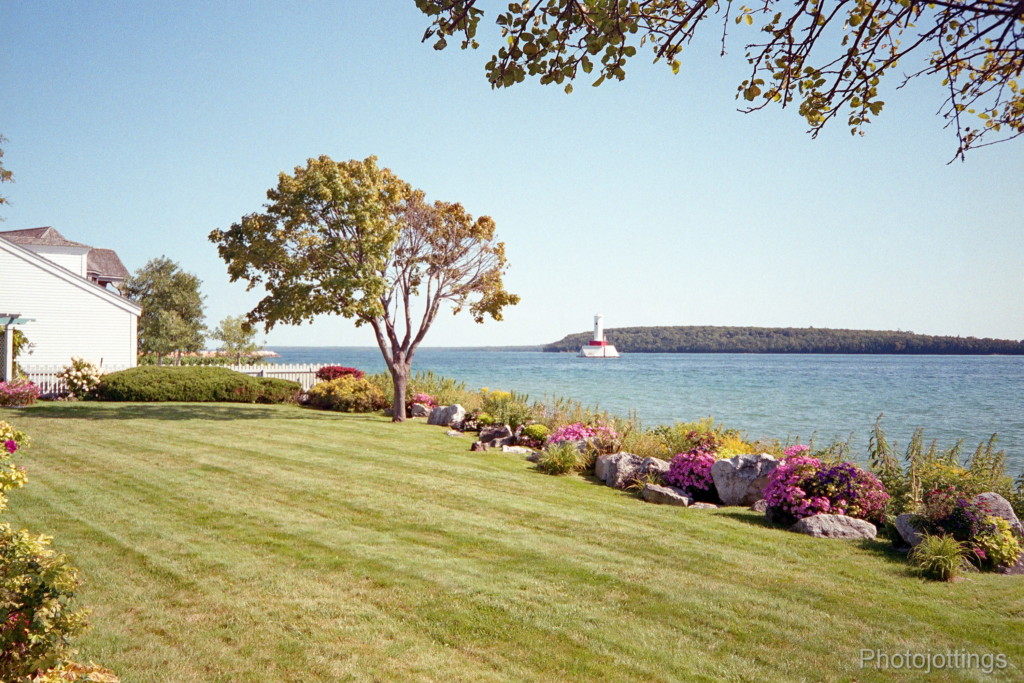 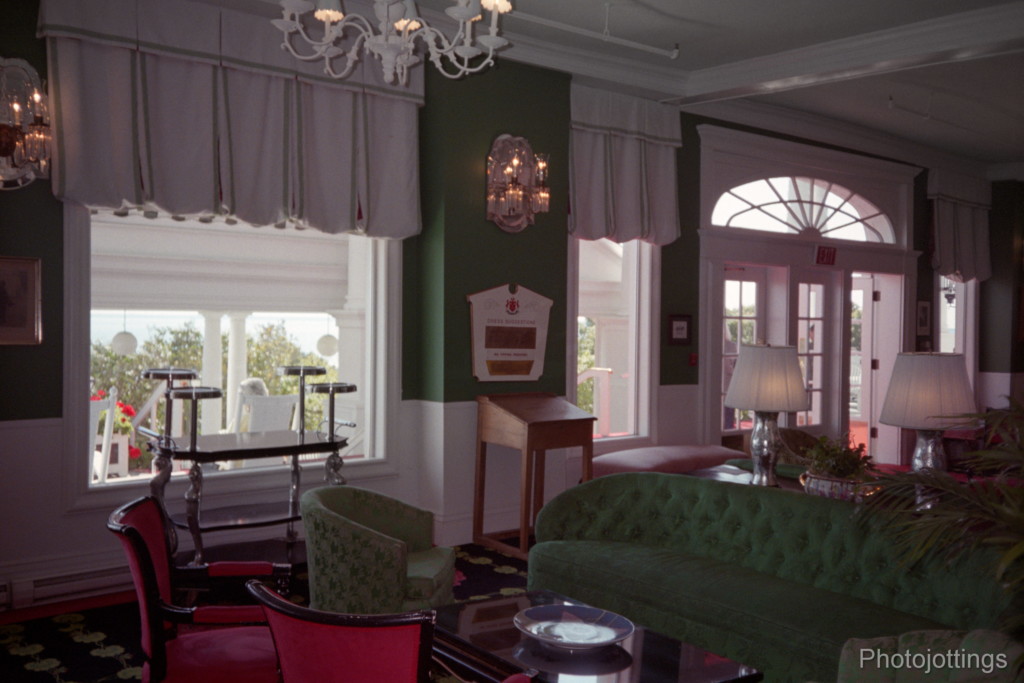 The Geranium room; flash used here at F/4.5.  Look out the windows and you can see the blur; it’s only focusing at around 10 feet, so the depth of field is limited, otherwise the interior is reasonably sharp, although the flash in not very powerful, even with ISO 800 film. 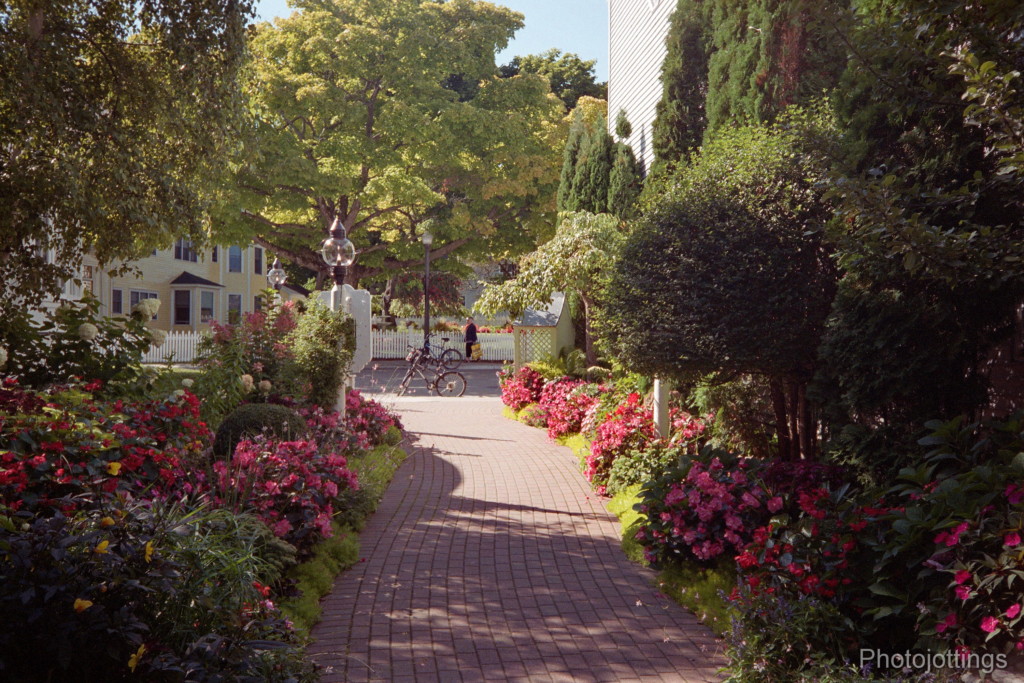 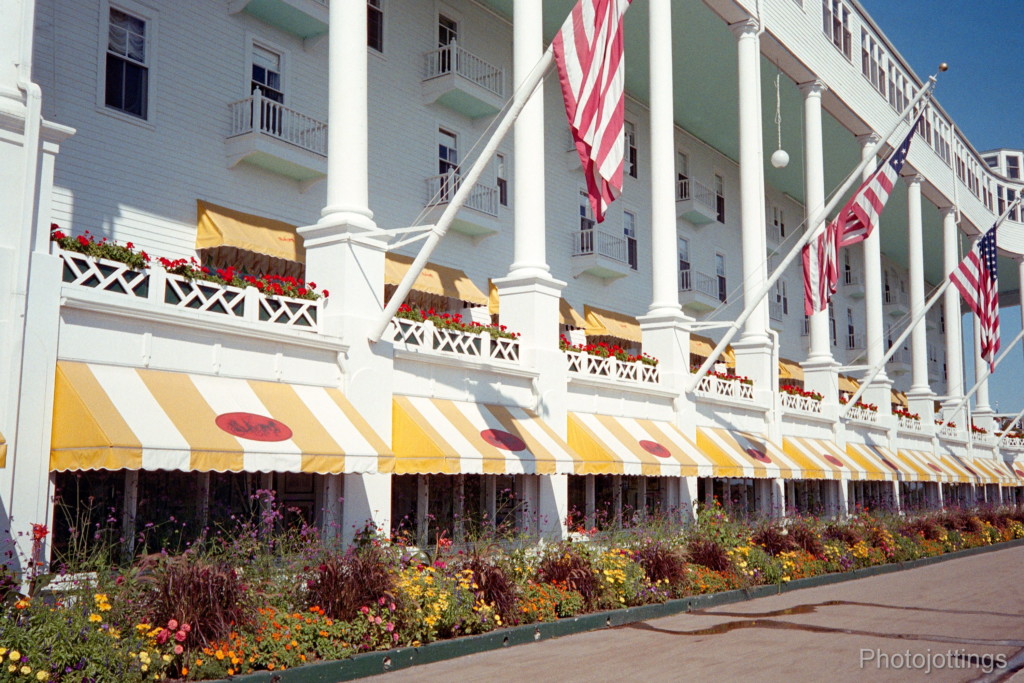 The Kodak Breeze is a fun camera to take snaps with, just point and shoot; no worrying about aperture settings, shutter speeds or focusing; it’s super fast, and it’ll take a picture as fast as you can put it up to your eye and press the shutter button; don’t forget to wind it for the next shot!

The camera is very easy to operate, and the lens is reasonably good for snaps, although typical for cheap lenses the color and contrast are lacking.  I don’t see much in the way of distortion or color fringing, but don’t get the bright sun inside the shot or you’ll get some bad blow-outs and rainbow flare.

The camera has three aperture settings; there’s a single switch with two settings below the lens; on the left is ISO 100/200, where the small hole is F/8.  When switched to the right for ISO 400, the slightly smaller hole is F/11. The top switch above the lens is for turning on the flash; moving the switch mechanically swings the aperture disks out of the way for an effective aperture of F/4.5; even when there are no batteries and the flash doesn’t fire.

For best results when making large prints, or scanning and viewing on a computer screen, use inexpensive ISO 800 film, and set the ISO switch to 400; doing that stops down the aperture and makes the image sharper.  Don’t worry about over-exposure with 800 speed film in bright light; color print film will be able to handle the additional stop of light.  Also, don’t worry about using expensive film like Kodak Portra 800; the lackluster lens performance won’t show any benefits of good quality film.

So two thumbs up for the Kodak Breeze camera; it’s quintessential Kodak, you press the button, and they do the rest!