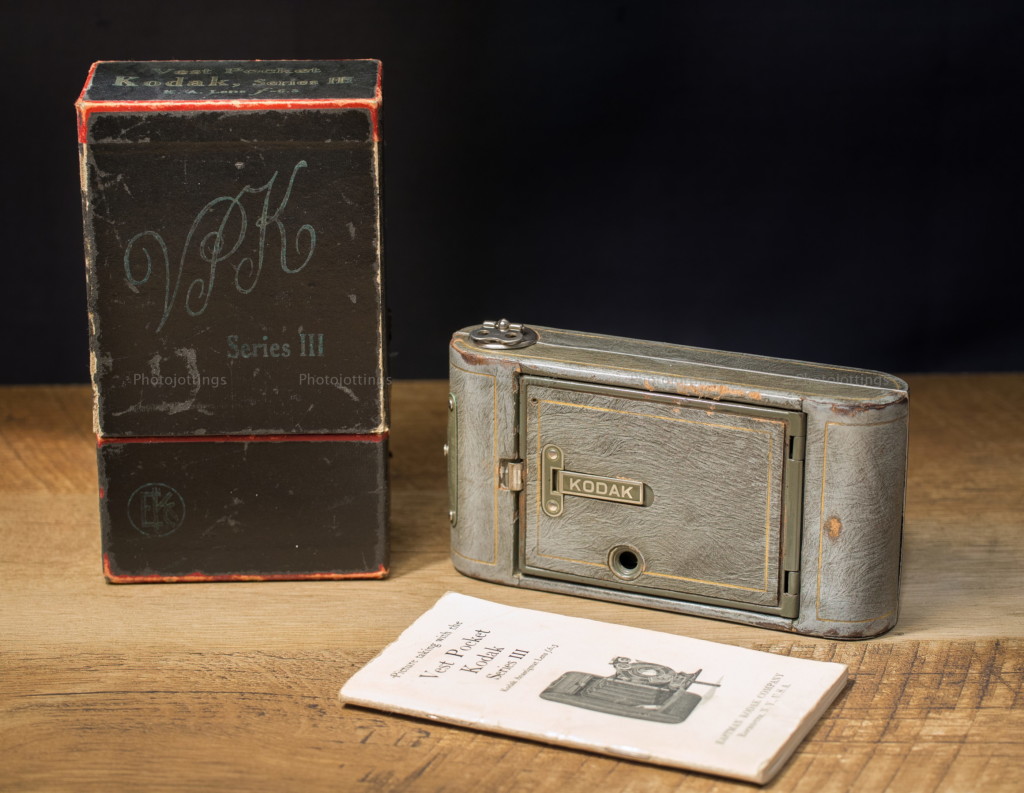 The ‘Vest Pocket’ Kodak models were produced for several decades between the teens and the thirties, and featured numerous lens and shutter combinations, along with some neat colors and coverings, like the ‘Sea Gull’ finish you see here.

Vest Pocket Kodak Series III models are very small as the name suggests, and they’ll easily fit in a ‘vest’ pocket, or in the back pocket of your jeans.  Of course they’re ‘folders,’ meaning they must be opened up and the lens extended before taking pictures, which makes them a bit larger and more cumbersome when you’re actually taking pictures.

Our ca1932 review model has a good Kodak Anastigmat F/6.3 lens, along with a decent four speed Diomatic shutter, and thumb screw focusing.  Surprisingly, the shutter works properly, and the original cloth bellows (that are always full of holes) has been replaced at some point in time with a leather one, so there are no light leaks to hinder our test pictures. The only drawback to using this camera today is the availability of 127 film; sometimes you can get fresh B&W or even color film, and other times you can’t.  Check for fresh 127 film here. and here.

In the early 1930s Kodak was still producing ‘Autographic’ cameras and film, but not for long; the 1931 dated owner’s manual with my copy only briefly mentions the benefits of recording your picture details on Autographic film, and in a couple of years they would drop the ‘Autographic feature altogether.

With the introduction out of the way, let’s check out the specifications of the diminutive Vest Pocket Kodak.

Price; price on box says $8.50.  Current eBay prices range anywhere from $25 to $150 for a good working copy; and much more depending on condition and accessories.

Prints; originally about the same size as the negative, 1-5/8 x 2-1/2, all black & white of course with a white border.  Good film and proper technique today will make very sharp 5×7″ or larger prints.

Shutter and speed; Eastman Kodak Diomatic No. 0, with 9 aperture blades and speeds of; 1/10, 1/25, 1/50, and 1/100, with ‘T’ time mode, and ‘B’ bulb mode.  After cocking the shutter; time mode works by pressing and releasing the shutter button once to open, and a second time to close. Bulb mode works by pressing down and holding the button, and then releasing to close.  Cable release socket is factory covered with a chrome screw; take the screw out for access.

Features; two tripod sockets, and a vertical stand for keeping the camera level on a flat surface.  Viewfinder has two masks, one for viewing horizontally, and one for vertical orientation.  Autographic film compatible using sliding door on back of camera, and stylus stored along side the lens, see picture above.

Crippling features and omissions; rough shutter release makes it hard to hold steady, even at the top speed.  The cheap, but cool matching color cloth bellows didn’t last long, and were full of holes in a few years. I’ve never seen an original cloth bellows that was still good today, but many leather type bellows hold up well, and are still usable today.

Good features; very small, and yes you really can put it in your vest pocket; it’s about the same size as a small 35mm camera with the lens retracted.  I like the bulb, time and cable release options. 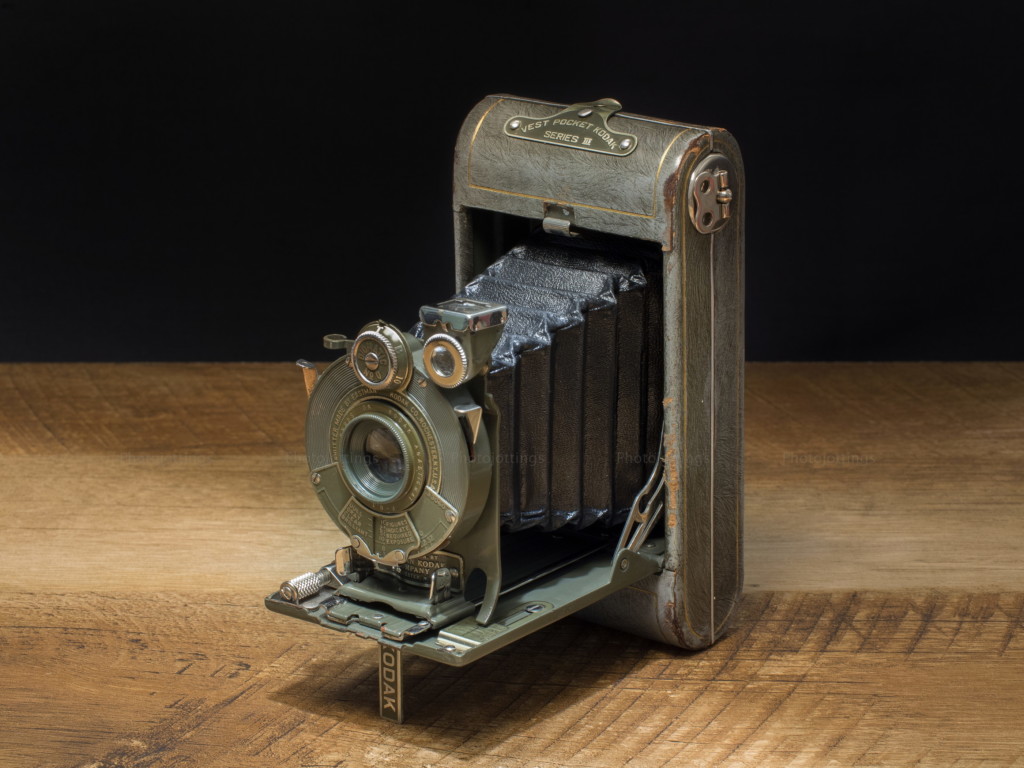 Folded out and ready to shoot.  The vertical leveling foot is employed here for table top use. 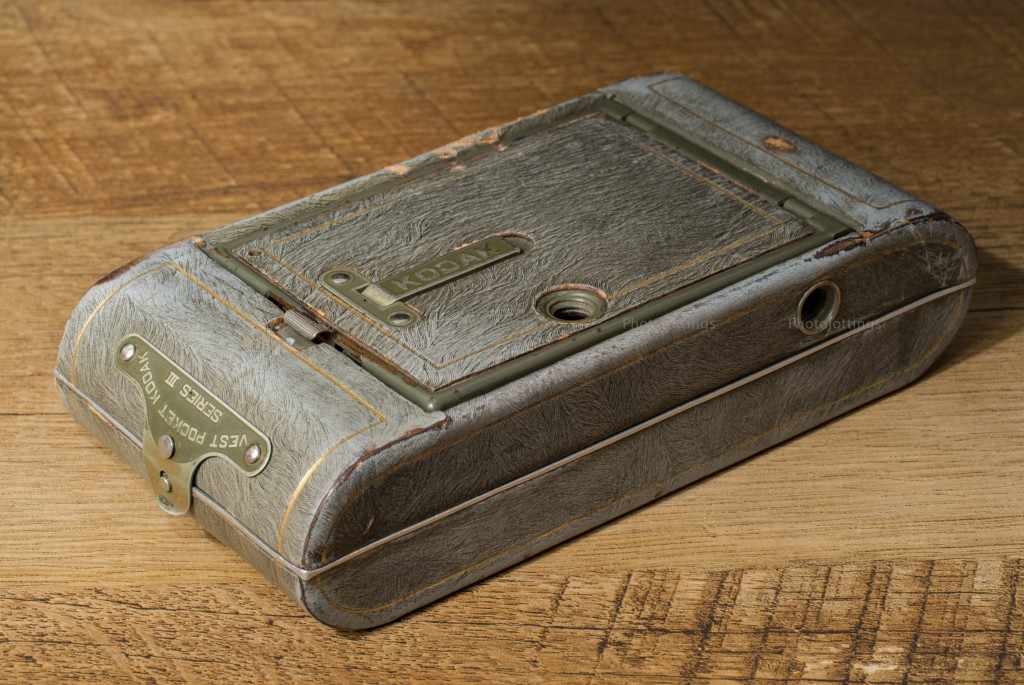 The front when folded up, and showing off a few bruises here and there.  Notice the two tripod sockets on the front and bottom of the camera.  The spring loaded opening latch is on the left end next to the leveler. 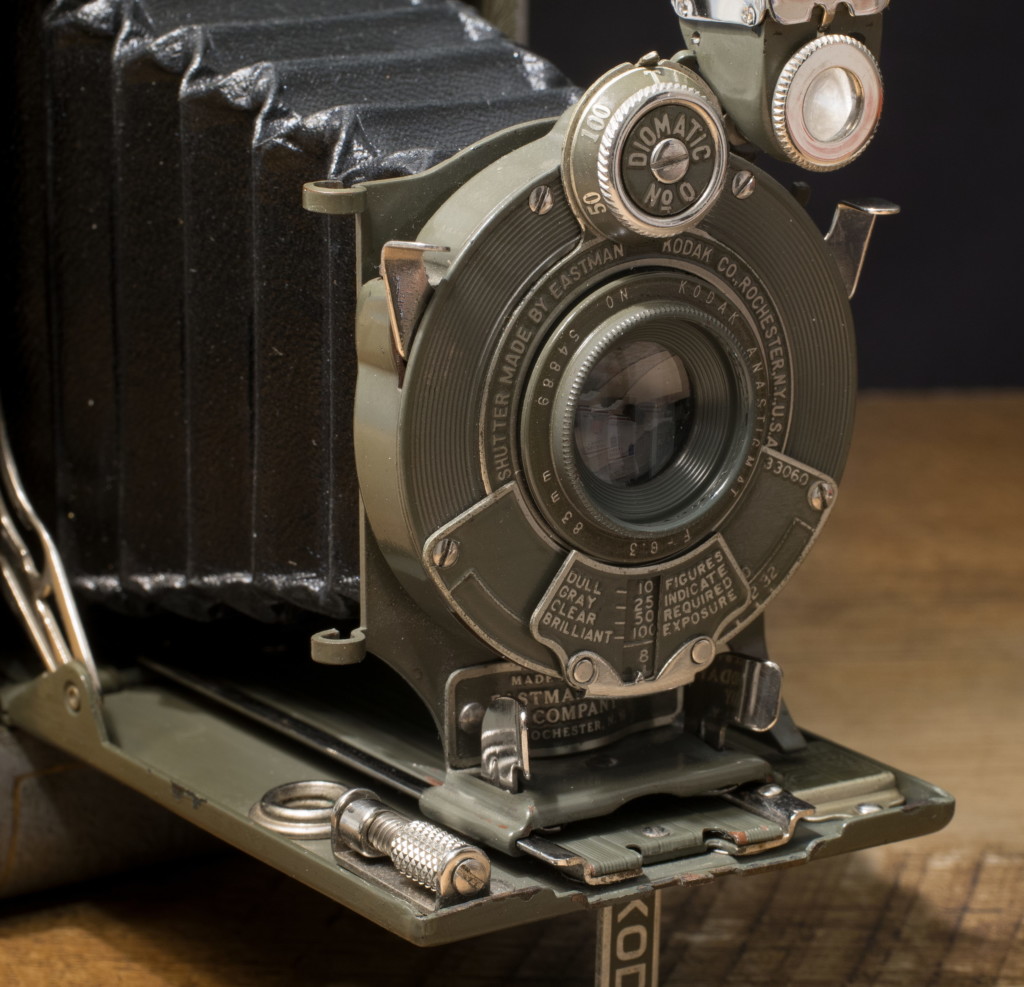 Draw out the lens standard by pushing the two levers together located under the lens aperture scale; is should lock after releasing; if it doesn’t, make sure you have a way to keep it stationary as you take your pictures, otherwise the focus will be screwed up.

The front lens element will unscrew counter-clockwise for cleaning; be careful when doing this as to not bend the front standard back towards the bellows.

The knurled thumb screw in the foreground is for focusing; turning to the right as you hold the camera moves the lens forward for closer distances.

The little loops on the left side of the shutter are for holding the metal stylus which is used for marking on the Autographic film.

The small round dial on top is for adjusting the shutter speed.

The push-down lever on the right side of the shutter/lens combo is for cocking, the left one is for taking the picture. 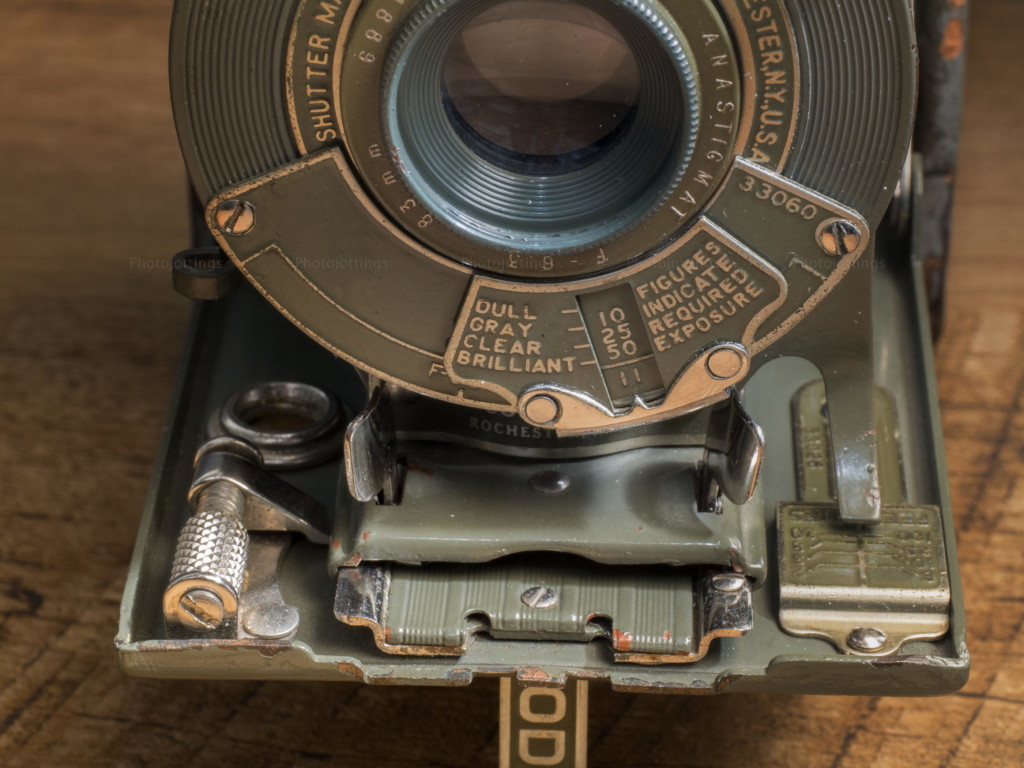 The aperture scale is still useful today.  Although the scale is probably set for ASA 40 film and the ‘sunny 16’ rule, you can use the bottom ‘Brilliant’ setting for average lighting with modern ASA 50-100 B&W, and ASA 100-400 color print film.

The little pointer tab on the lower right in the picture is for setting the focusing distance on the scale. 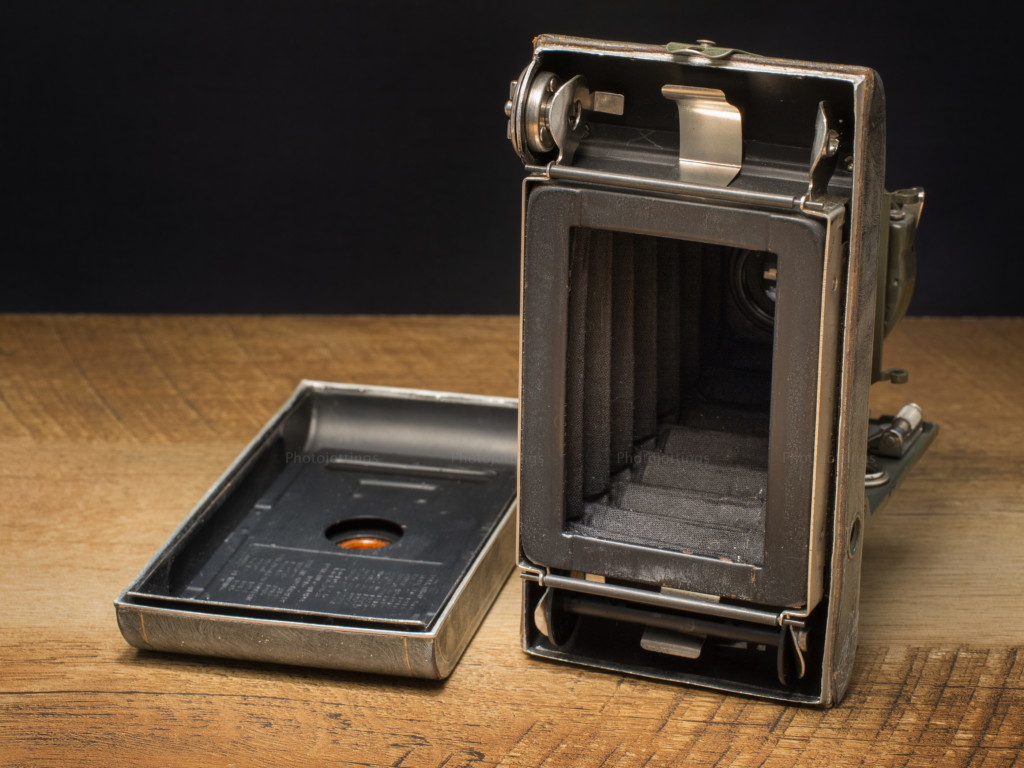 The camera comes apart using a spring metal tab on top. Here you can see the film gate and inside the bellows.  Incidentally, the film gate measures 65mm by 42mm.

The fresh roll of film goes where the current empty spool is, and the empty spool goes on top.  Once you get the paper film tab secured appropriately on the take up spool, you can re-install the back cover. 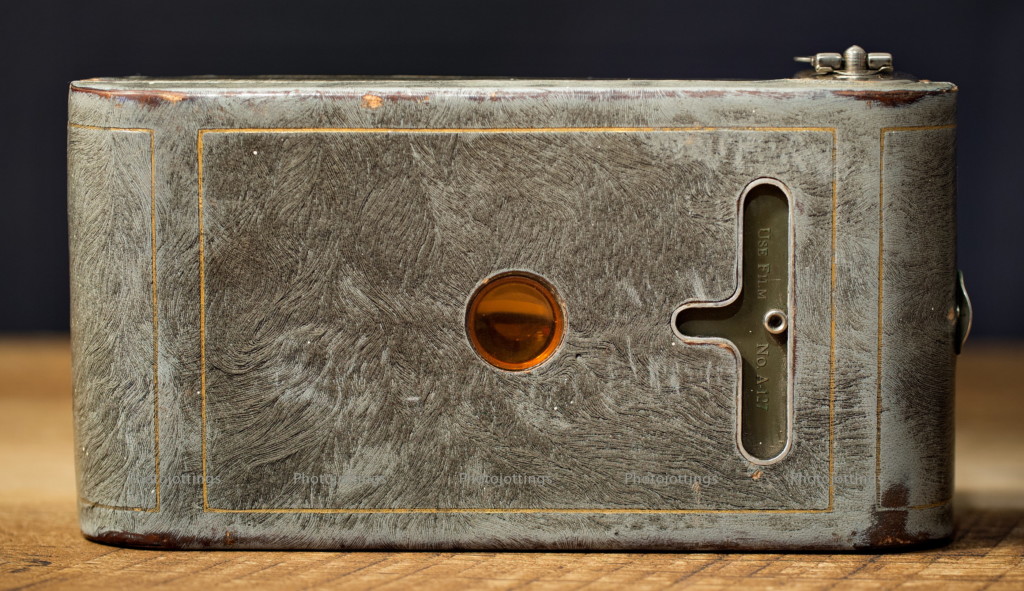 Here is the back of the camera, showing the ‘Autographic’ sliding cover.  The metal stylus point would be inserted into the little hole in the middle, and pulled down.  You record your information or message, hold it up to a light for a few seconds, and then pull the cover closed.  The red window is used for observing the printed shot number on the backing paper, and correctly advancing the film so you don’t get overlapping pictures. 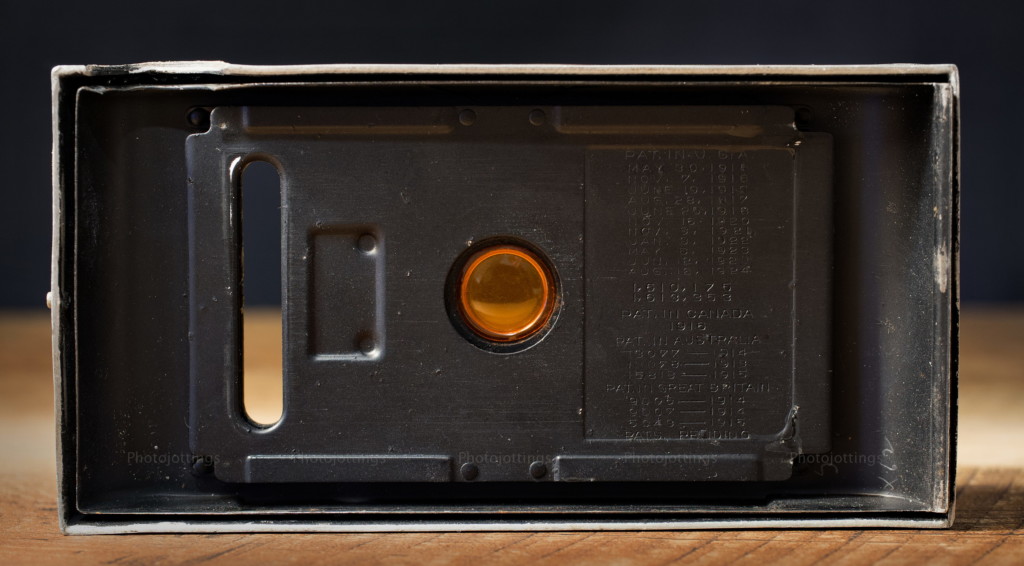 This is what the inside of the back cover looks like with the ‘Autographic’ window open.  Don’t open it with modern high speed film in bright light, otherwise you may fog the picture.

The latest patent date etched on the metal pressure plate reveals August 12th, 1924.  This is not the date of manufacture as many people think, it’s only a patent date, and has nothing to do with when the camera was made.  Additionally, you could change out the backs between the same camera models; so if that particular model was made for ten years, the dates become meaningless.

The Vest Pocket Kodak is about the same size folded up as a little 35mm camera.

Here are a few samples for your viewing pleasure.  They’re 3000 pixels on the long end, so click image for a larger version.  Scanned on a Nikon Coolscan 9000 ED.

Rerapan 100 used for all test shots.  Rerapan has been discontinued by most outlets, and no one really cares; it has poor grain structure and limited resolution. 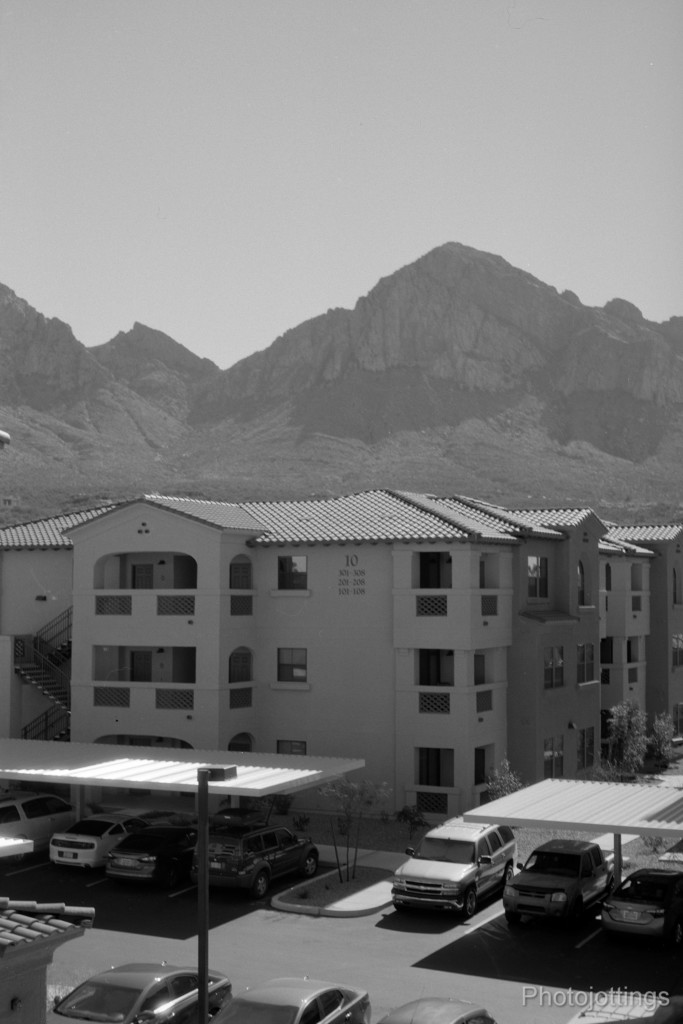 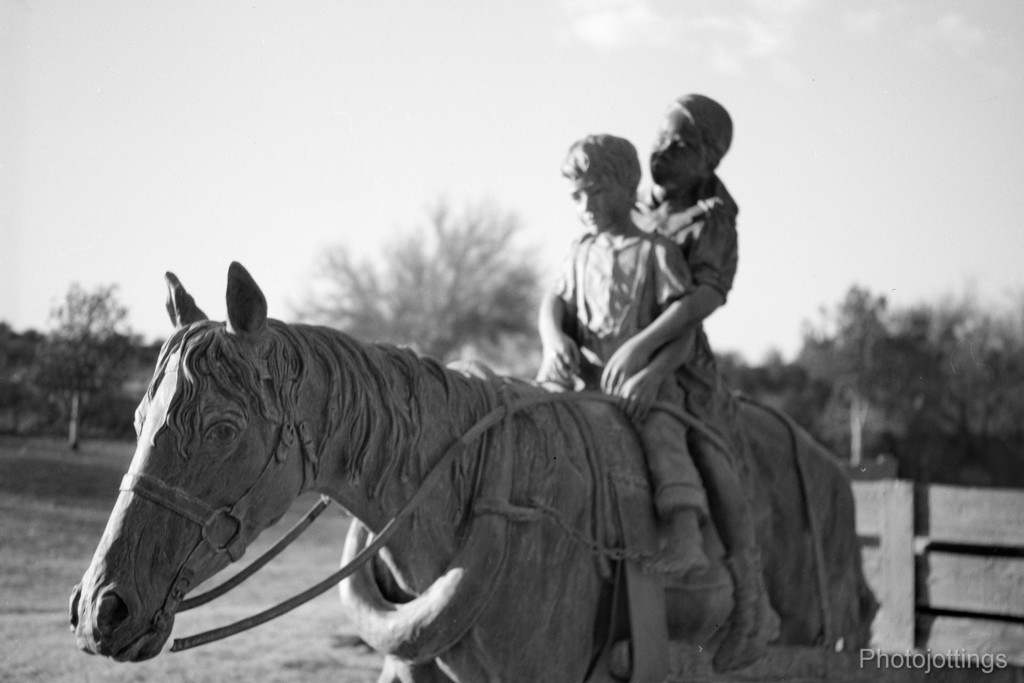 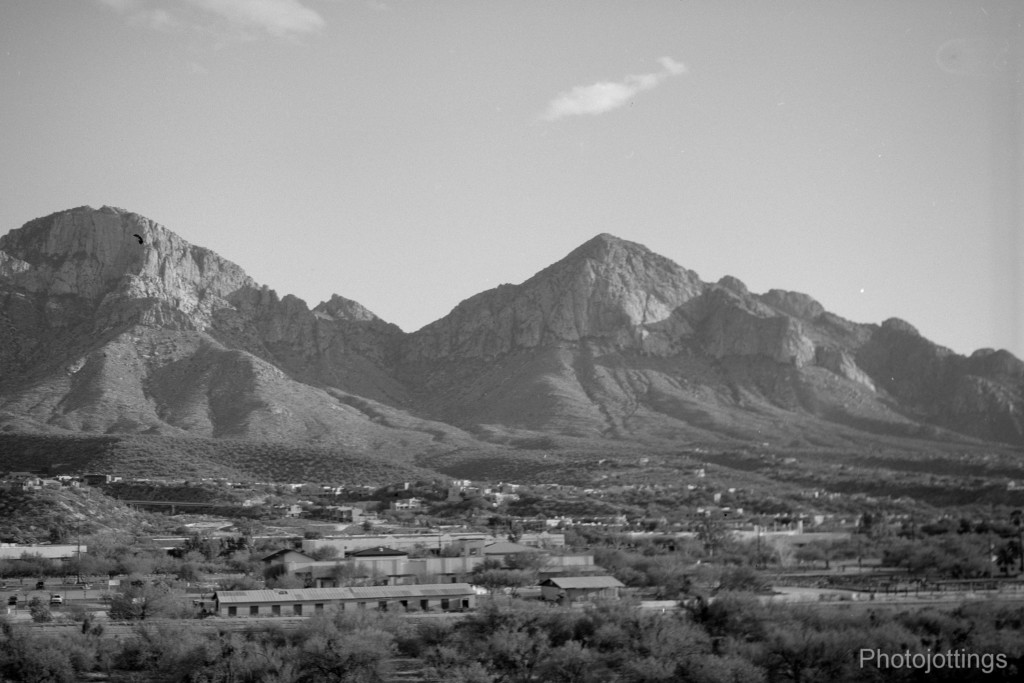 Quite soft all over, especially along the right side.  F/8, 1/100s.  Noticeable camera movement here. 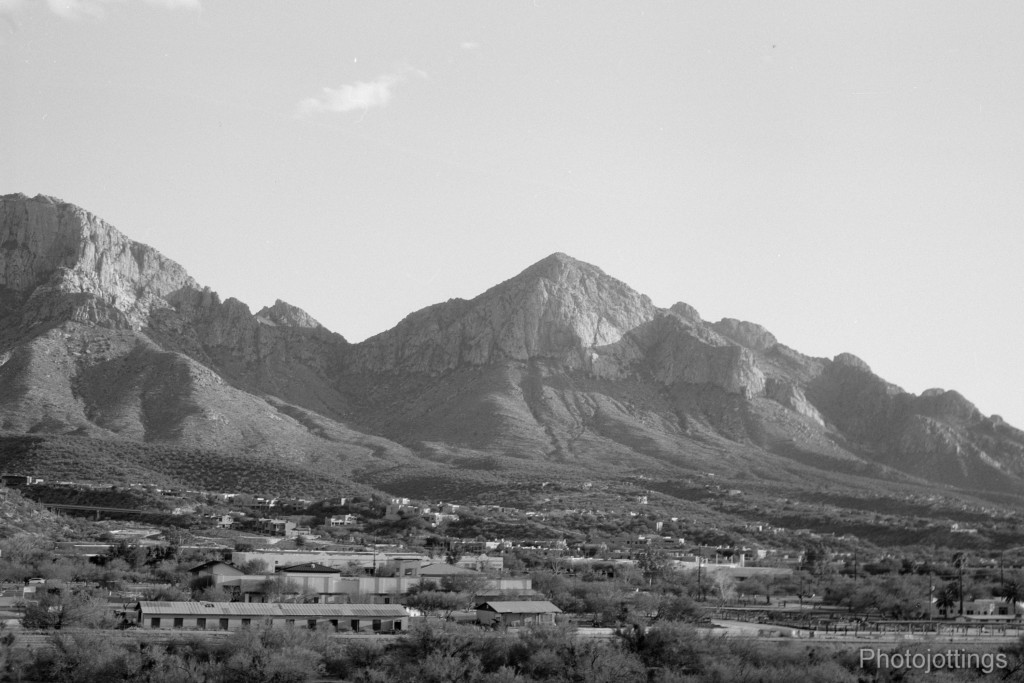 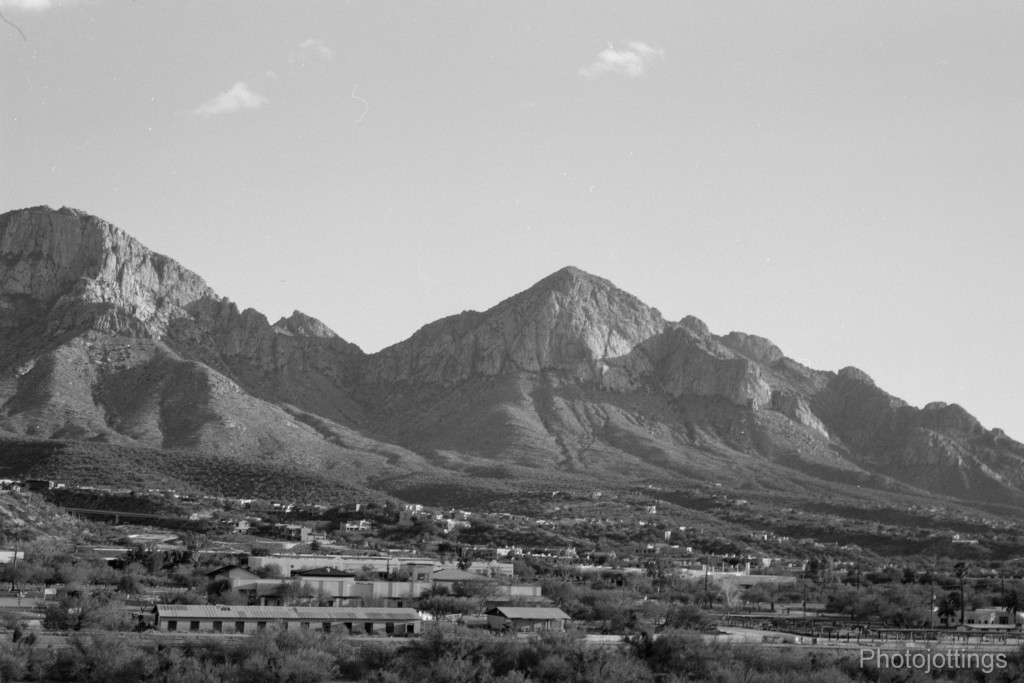 After I scanned these images I was a bit disappointed on the right side softness, so I looked more closely at the lens alignment and noticed it was bent back and tilted up slightly, which would explain the soft right side in the horizontal orientation.  I fixed that, so maybe I’ll run another roll through the old gal and see what happens.

As of this review I have one roll through the Vest Pocket.  About half the pictures turned out ok, and the other half were awful; mostly because of the lens misalignment issue, but also because I don’t like the Rerapan film, it’s just boring.  I do have some fresh 127 color film, but I’m probably going to use that for a couple of other cameras that I find more interesting.  I’ll continue to tweak the camera until I’m reasonably sure I can get better results than what I got with the first roll.  Another problem is the rough acting shutter pull; it tends to jerk the camera causing movement even with a cable release.  Maybe I’ll use ‘time’ mode and a cloth as a work around for test shots, but you can’t use it that way for those vacation snaps that are so fun.

Overall, the Vest Pocket Kodak ‘Sea Gull’ edition has a lot of potential; the film negative size is three times larger than 135 format film, and even slightly more area than 6×4.5 film, so with a good lens it should be able to produce tack sharp shots at 4000 or more pixels wide after scanning.

Let’s hope for a long term commitment from large scale film suppliers like Kodak or Ilford so we can start using some of the great old 127 cameras that are sitting in our homes collecting dust.  In the meantime, check for fresh 127 film here. and here.

Anyhow, that’s it for the Vest Pocket review, thanks for visiting!

Please consider buying your goodies through my links, that helps support the site!