The compact, inexpensive and easy to operate Agfa Silette-1 was introduced back in the early 1960s, when inexpensive and easy to operate cameras were a dime a dozen.  So why did I buy it, and what makes this camera any different than all the others?  Well, not too much to be honest, but it does have a few nice features that aren’t all that common on cheap cameras, like a good quality lens, full manual controls, and a cable shutter release.

Speaking of ‘easy to operate,’ this camera is almost point and shoot simple; if you drop in a cartridge of ISO 200-400 negative film, set the aperture to F/8-11, the focus to around 15′ (4.5m), and the shutter speed to 1/60-1/125, you can shoot in a variety of situations without changing any settings at all, and the results will still be more than satisfactory.  That’s what I did below for some of the shots except the test samples.  The Agnar lens is pretty sharp stopped down, with good color and contrast.

Are you looking for a very inexpensive 35mm camera for some fun snaps?  Look no further than the Agfa Silette 1!

With the brief introduction out of the way, let’s do a quick walk-around of this compact 35mm camera.

Price; unsure, I’m guessing in the range of $35.00 based on the similar Kodak Pony II price and features.  I paid about $15 plus shipping for our review camera.  Current eBay prices range anywhere from $15 to $40 or more depending on condition and if it comes with the original box etc.

Build material; metal and plastic with a decent fit and finish.

Box contents; camera and manual only.

Aperture;  manually set and marked in one stop increments only, but in-between settings are possible.

Focusing distance; 3.25′ to infinity, or 1.0m to infinity.  Marked in green for feet, and black for meters.

Viewfinder; bright and clear, but flat un-coated glass, and no parallax compensation marks.  The viewfinder doesn’t show anywhere near the whole image, see picture below.

Shutter and speed; Prontor 125, has two ‘V’ shaped aperture blades and two round shutter blades; three speed shutter from 1/30, 1/60, and 1/125 second, plus bulb mode.  The manual advises you not to use ‘intermediate’ shutter values between two settings.

Flash; does not have a built-in flash.

Accessories for this model; a leather like carrying case, and 32mm push-on filters and hood.  I also see an Agfa Natarix 35  supplementary close-up lens along with a tilted accessory shoe.

Crippling features and omissions; no camera strap lugs, so you can’t attach a neck or wrist strap.

Other versions; quite a few similar models out there, go here for a list of all the Agfa Silette models.

The Silette 1 has a simple lens and shutter assembly, with a lever type shutter button on the side.  The lens is mildly coated with a distance scale that features both feet and meters, plus ‘focusing symbols’.  The ‘two heads’ are for portrait distances about 6′ or 1.8m away: the ‘woman, child and man’ symbol is for group shots around 12′ or 3.8m, and the ‘church in front of the mountains’ is at infinity.  Focusing is done by turning the front element.  Notice the absence of any strap lugs on the sides as almost all cameras have.  I guess Agfa wanted you to buy the ‘ever ready’ case instead of just attaching a cheap neck or wrist strap. 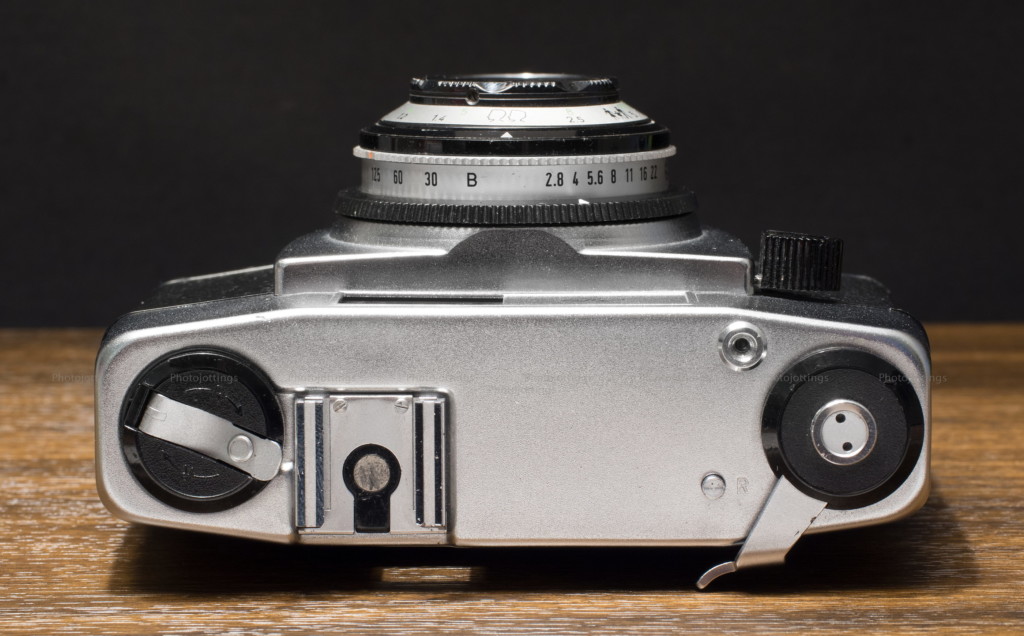 Along the top plate from left to right we have the common flip-out style film rewind lever, then a standard hotshoe, which syncs at all shutter speeds.  Over on the top right side is a cable release socket, but it’s in the same place as a shutter button, and looks like one too.  The little round button at the bottom with the “R” is for releasing the film sprocket forward lock so you can rewind the film back in the spool.  Of course the big black round disc with a lever coming out of the side is the spring loaded film advance lever; it takes about a 120° stroke to simultaneously advance the film and cock the shutter, and snaps back into position after winding.

In this view you can see the marks for the shutter speed and aperture.  Here it’s set for 1/125s, at F/4.  The knurled silver ring is for setting the shutter speed; it has a red index mark.  The aperture settings are changed by turning the black ring (against the camera body), to the desired setting lined up with the white index arrow.  There are only one-stop detents for aperture changes, however, it’s possible to use in-between settings if you want. 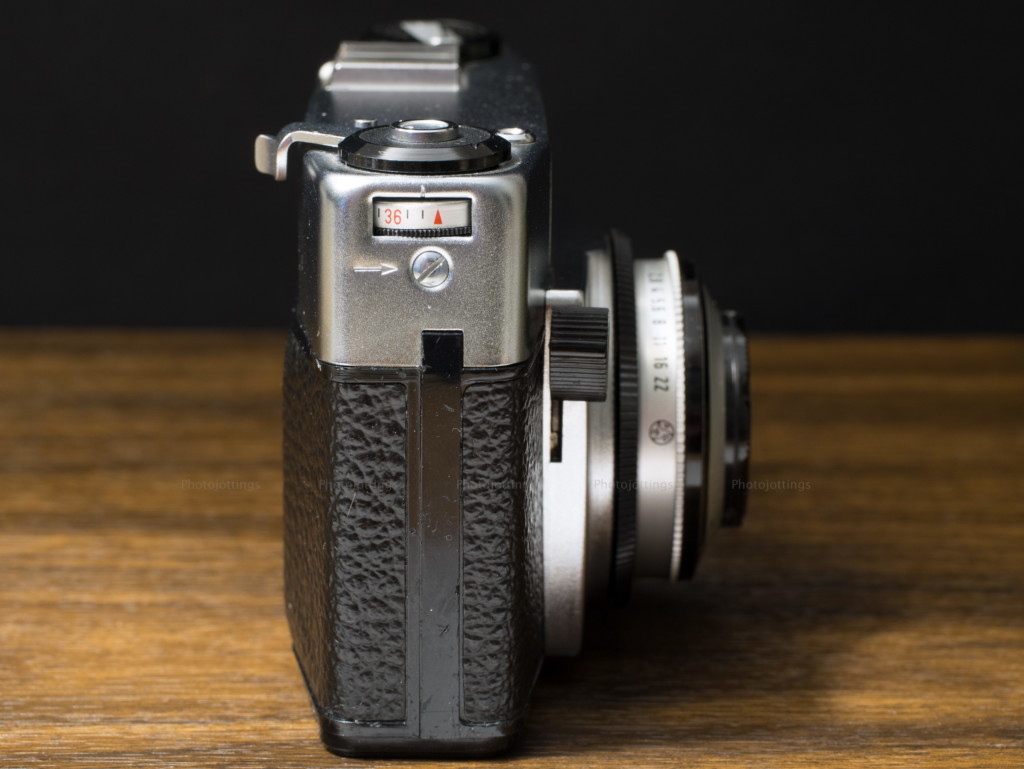 The subtractive shot counter is located on the right side of the camera.  You turn the dial in the direction of the arrow and stop at the red triangle or green triangle depending on the number of shots on your roll.  The picture here shows where you would set it for a roll of 36, with a single wind in a dark room you might get 38 exposures.  There are starting marks for rolls of 36, 20, and 12.  Oddly, the 20 roll indicator mark is in green instead of red.  Incidentally, the camera serial number is burned into the black plastic strip on the other side, not shown. 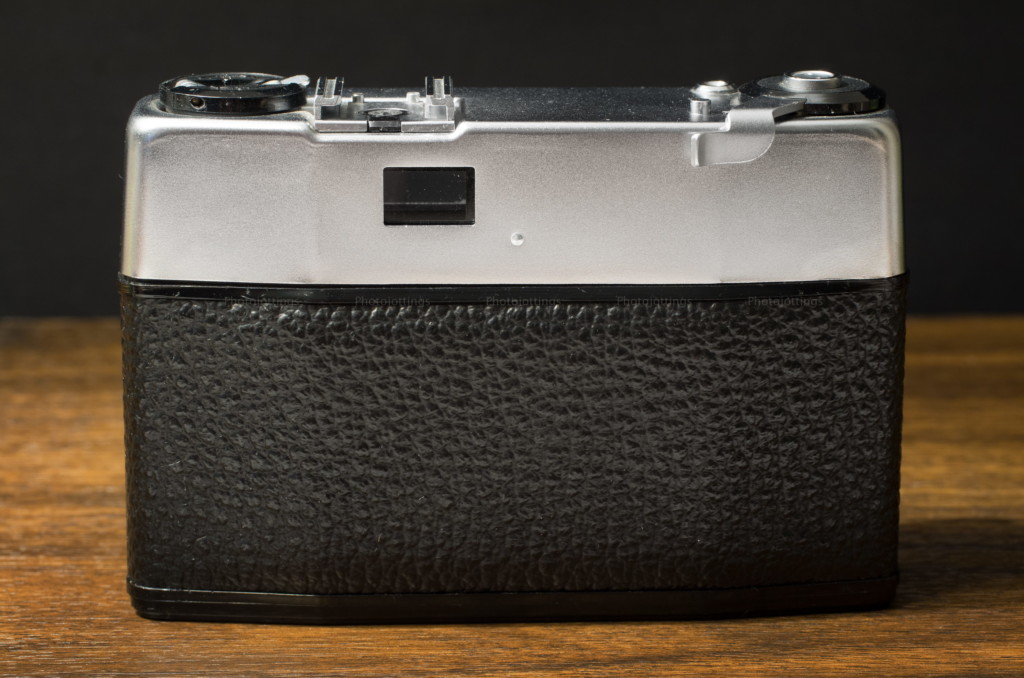 The viewfinder window is the only item on the back; unfortunately the view is heavily cropped and doesn’t show the full coverage area. 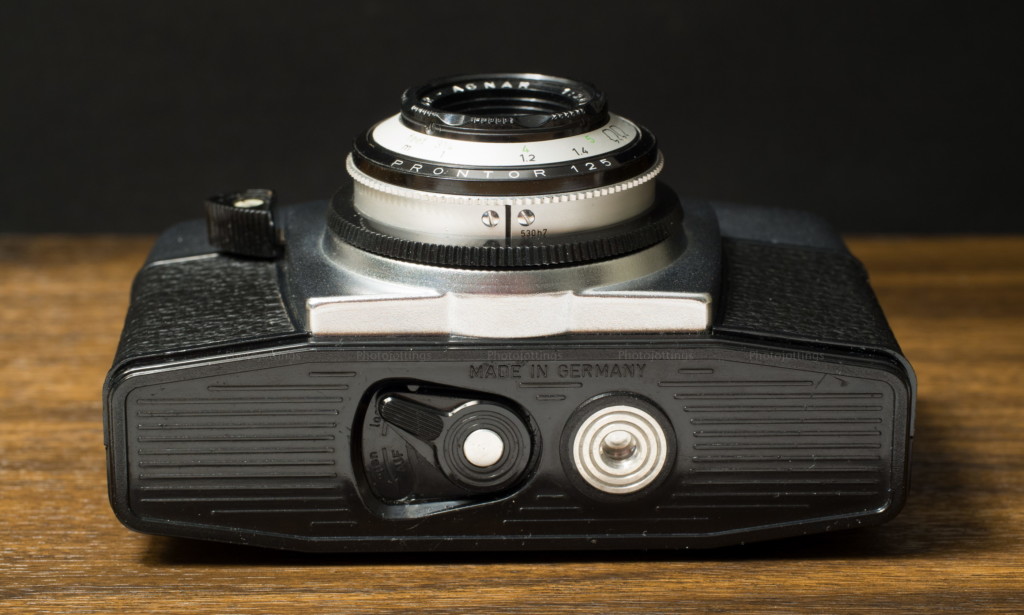 The bottom has an off-center ¼-20 tripod socket, and lever for securing the back of the camera.

The entire back of the camera comes off, which has the film pressure plate attached.  Keep in mind you don’t want to pull on the sides of the back to remove it; pull from the black strips along the sides that are attached to the camera body.

Here are a few samples for your viewing pleasure.  They’re 3500-4000 pixels wide, which shows all the detail present in the negative.  Click image for a larger version.  Scanned on a Nikon Coolscan 9000 ED.  All pictures taken with Kodak Gold 200. 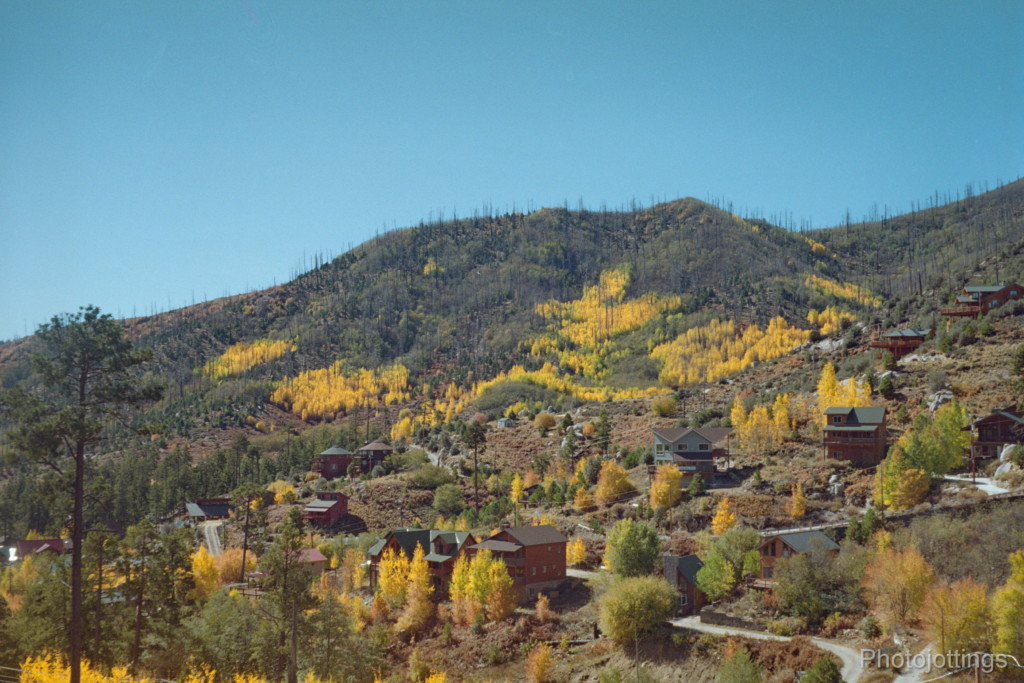 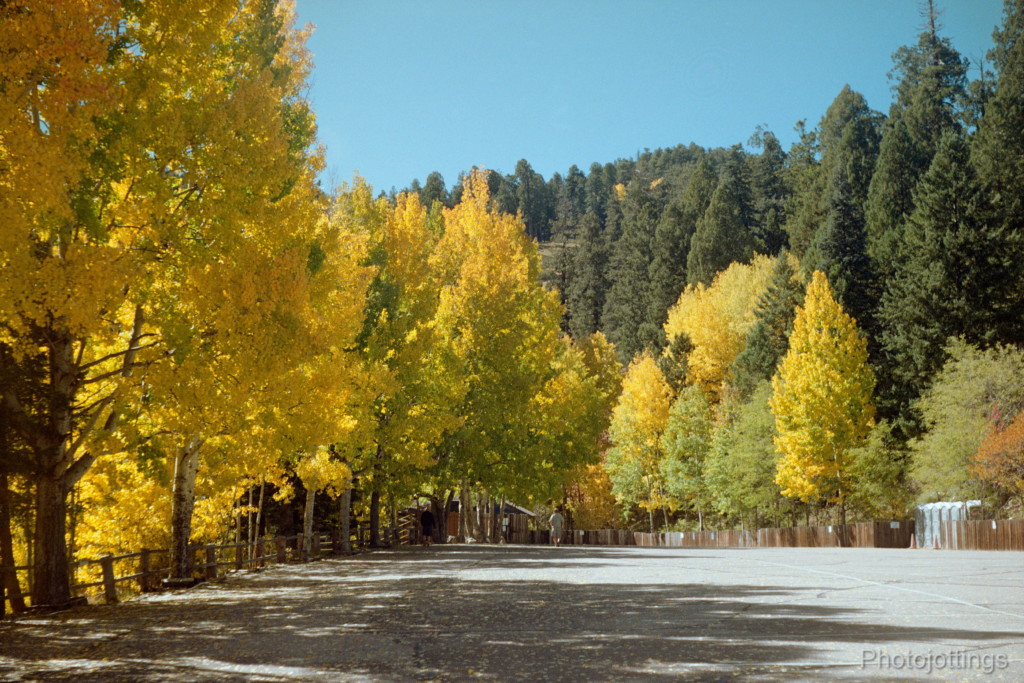 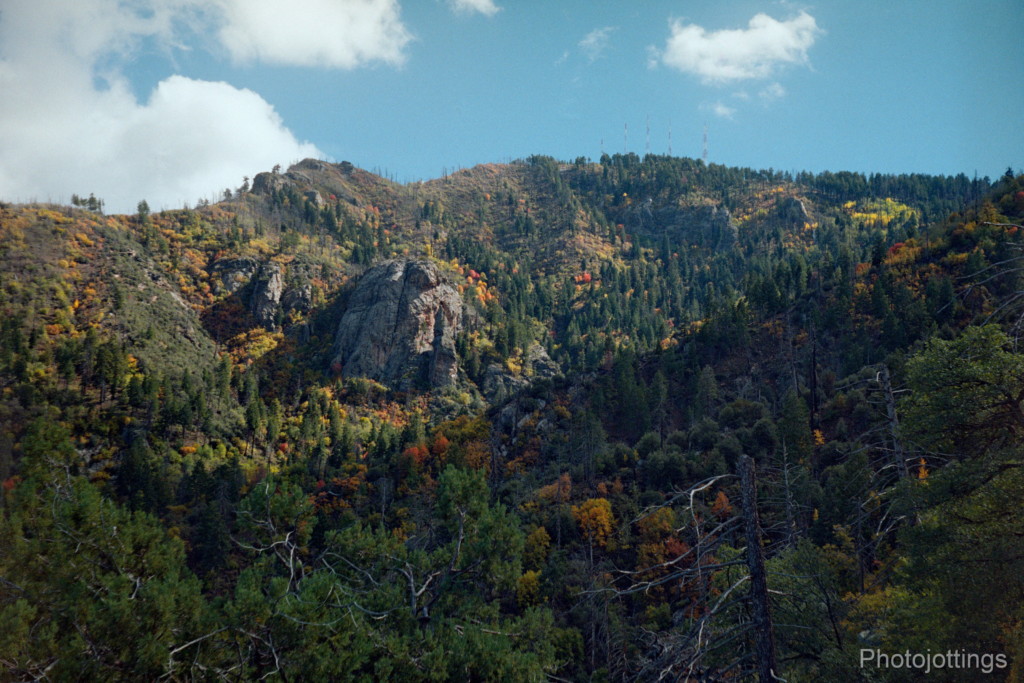 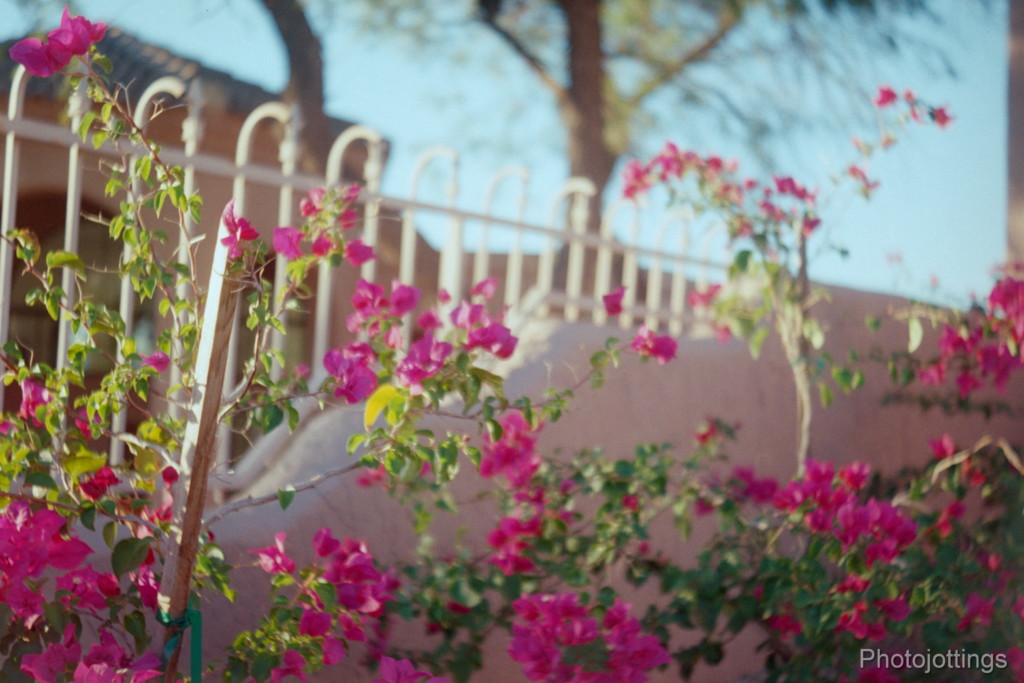 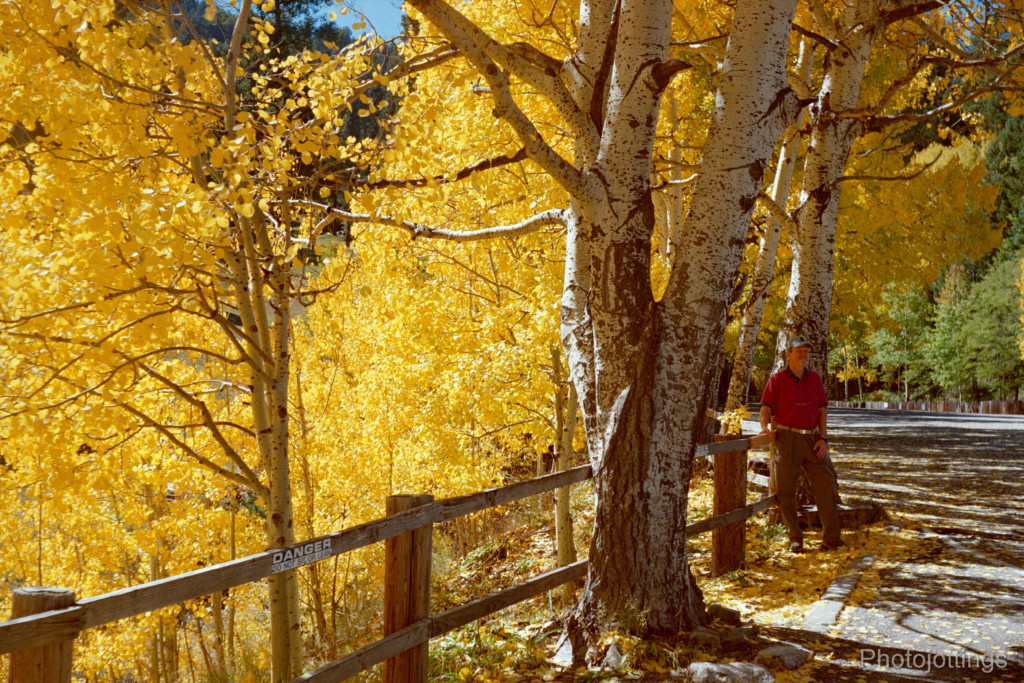 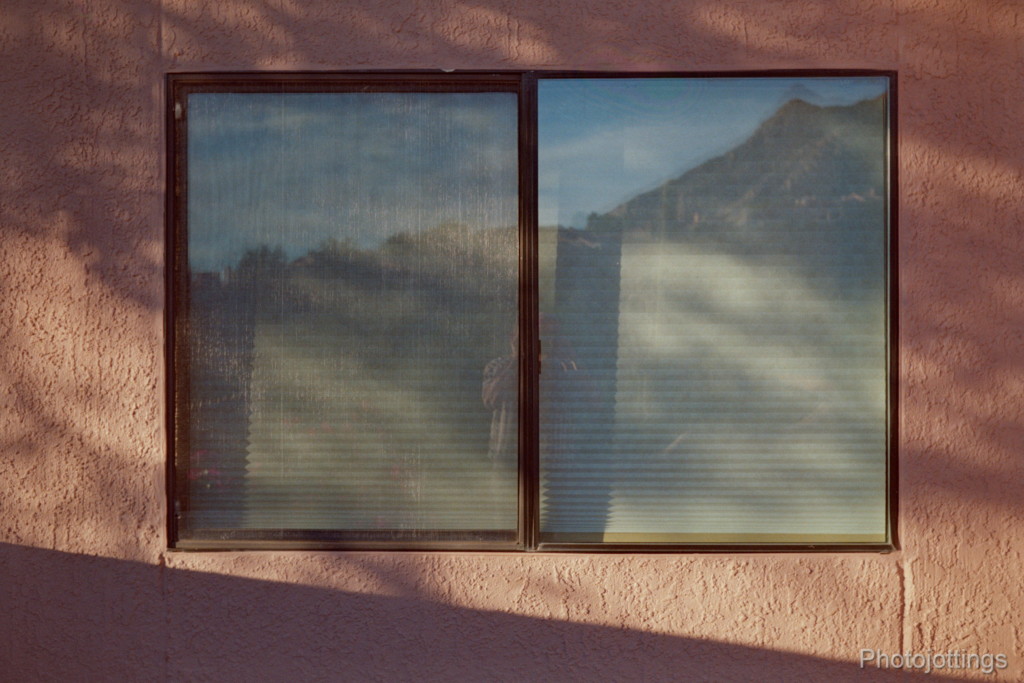 This is the actual coverage you get when you frame just the window as I did here.  The viewfinder coverage matched the window perfectly.

All test shots are displayed at 4000 x 2667 pixels wide when enlarged, and that’s all the resolution included in the film.  Scanned on a Nikon Coolscan 9000 ED.

Note: as I framed the mountains in the viewfinder, It didn’t show the foreground bushes and cholla cacti because of the issue in the shot above, I thought I was only getting the distant mountains, So the bottom part of the image is not within the depth of field for judging the sharpness of the lens. 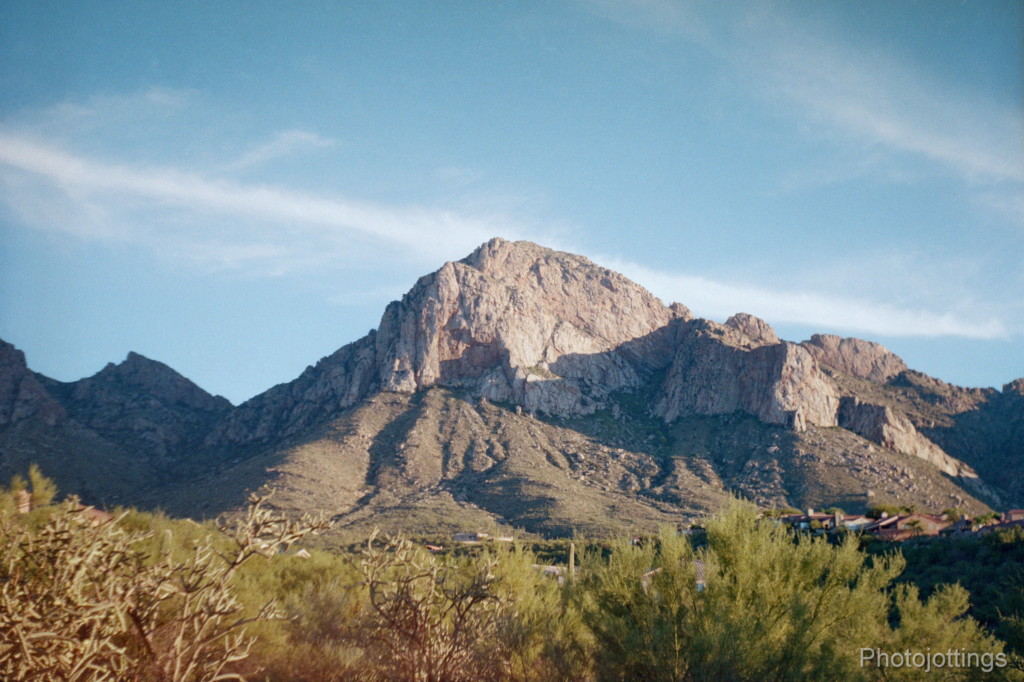 F/2.8.  Decent sharpness in the central area but soft along the sides. I see a lack of contrast all over.  Heavy light fall-off. 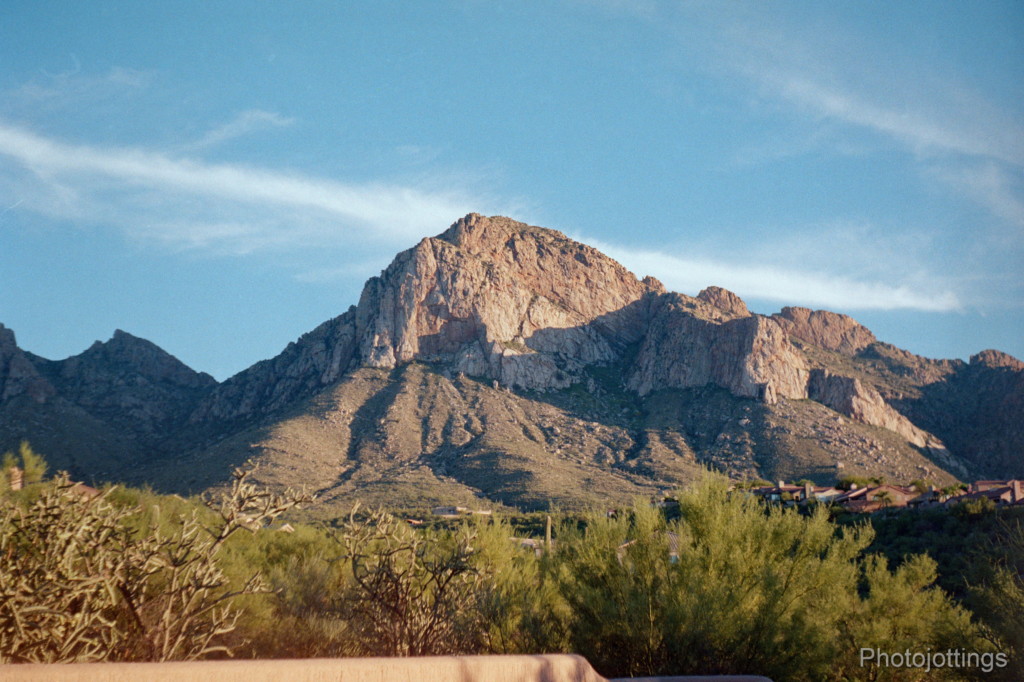 Moving down to F/4 gets rid of the veiling haze and bumps the contrast up, although the sides are still a little soft.  Light fall-off is still noticeable in the corners. 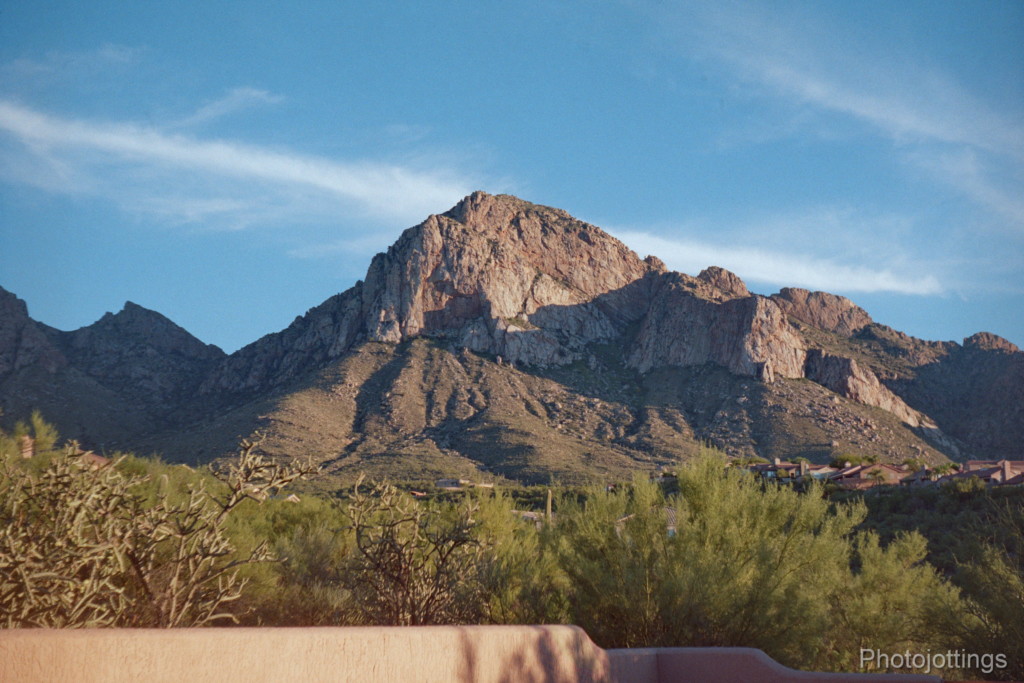 F/5.6.  The sides sharpens up nicely, everything else is about the same. 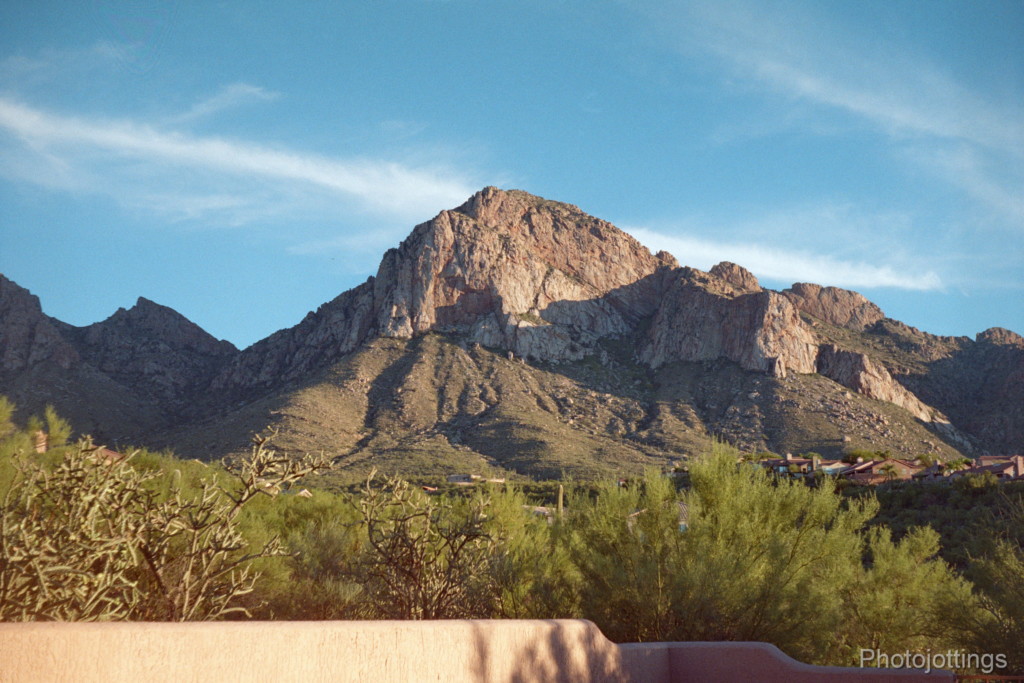 F/8. The whole image is pretty sharp with good contrast. 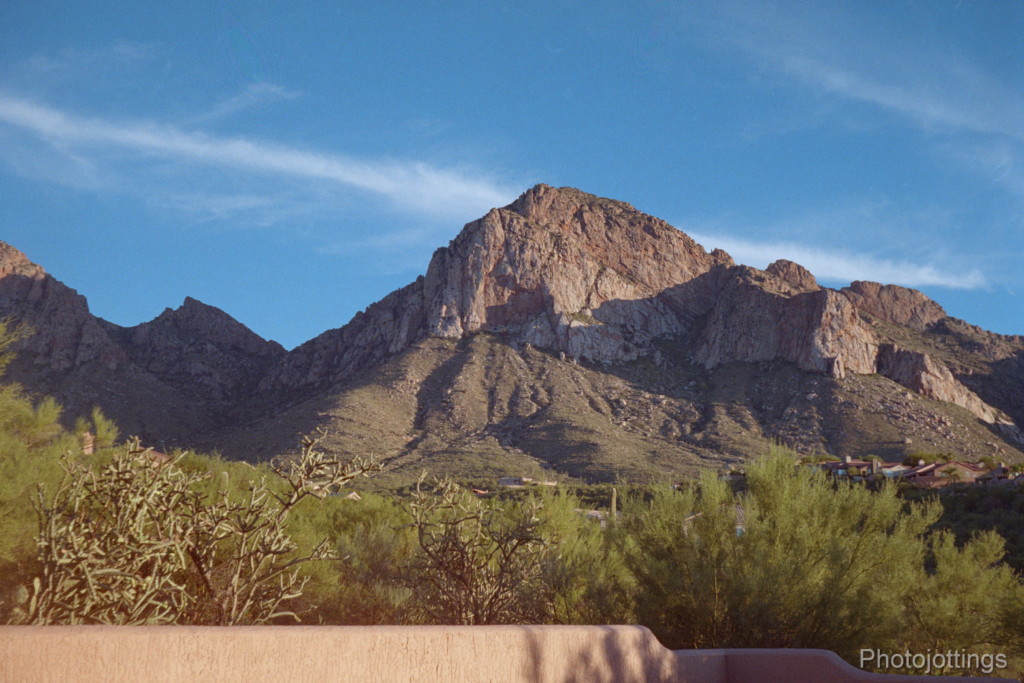 At F/11 I see a little softening due to diffraction.

The Agfa Silette-1 turned in a good review when considering how simple and inexpensive it is.  I was surprised at how well the pictures turned out.  The sharpness, color and contrast of the 45/2.8 Agnar is much better than average for a three element lens. In fact, it seems maybe a little better than the four element Anastar from the Kodak Pony I reviewed a while back.

The little Silette-1 has only the most important features for getting good pictures; a focusing lens, a cable release socket for those occasional long exposures, a three speed shutter, and seven apertures to choose from.

There are a few downers that come with this camera.  The biggest problem is the non matching viewfinder for the lens; the actual capture area is much wider than what you see in the viewfinder so it can sometimes be difficult to carefully frame your subject.  Another problem which is typical for an old camera is the shutter speeds are off by quite a bit.  My copy was slow a full stop or more at each speed, so the only usable speed was 1/125, which clocked in at around 1/80, and 1/60 was actually about 1/30, so that was only for emergencies as I’m a little shaky below 1/50s.

Overall, I like the Agfa Silette-1; it’s easy to use, needs no batteries, and the lens captures enough detail for very nice 8×10″ enlargements with good film and technique.

Anyhow, a thumb and a half up for the nice little Agfa Silette I!  Please consider buying through my links and help support the site. Thanks for visiting!