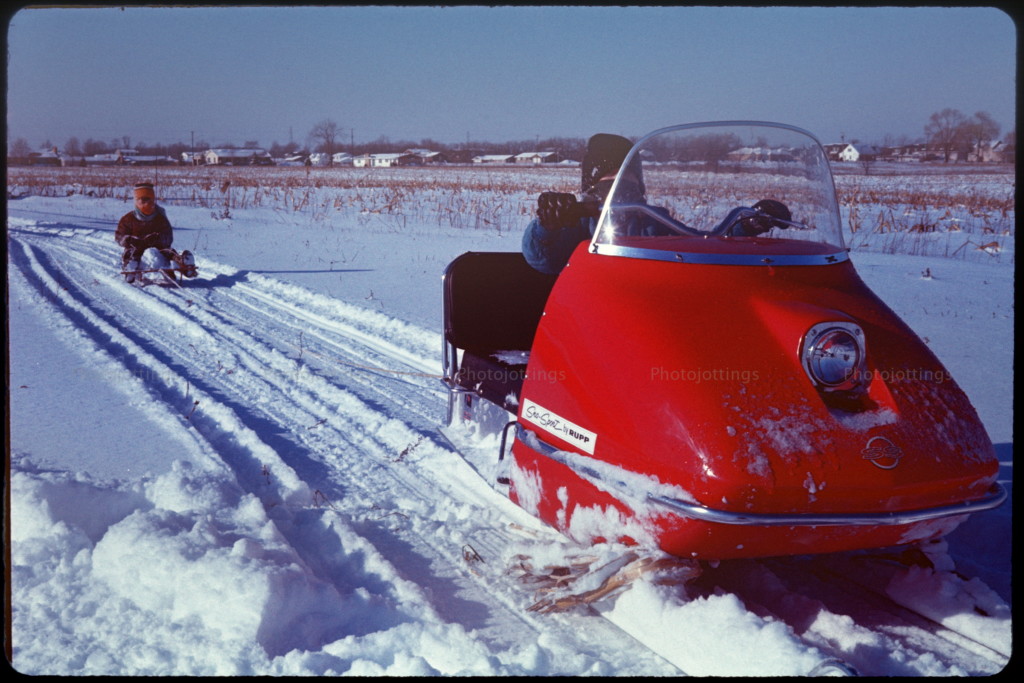 Let’s go for a ride on a Rupp!  In this fresh snowy scene we have my 10 year old brother at the helm of a 1968 Rupp Sno-Sport, and me being pulled along with a rope tied to my Sno-Flyer runner sled.  It was pretty fun until the snowmobile stopped quick, and you slammed into the back of the Rupp; well, that was all just part of growing up in the countryside; void of any sense of safety or caution.  Back then Peoples heads were stronger, and you didn’t need a cumbersome and goofy looking helmet.  Also, at about 15hp, you weren’t able to build up much speed, especially in soft snow and through a cornfield.

Rupp was a big name in Snomobiles in the late 1960s and 1970s.  The Company built everything in Ohio, including Mini bikes and the ‘Ruppster’ mini dune buggy which my grandpa owned too; he bought the stuff at local auctions for next to nothing.  Check out the ‘SS’ emblem below the headlight, it looks like they ripped it off from a 1964 Chevy Impala Super Sport.

This Kodachrome slide was taken by my dad (with this very camera) around 1970 at our Grandparents farm in Kalamazoo Michigan.  Back in the olden days, Grandparents had farms, now days they have townhouses in Florida and Arizona.  Unfortunately this 102 acre farm is gone now, replaced by a school, two huge apartment complexes, and strip malls.  Even in the late 60s the new houses started to surround the property as you can see in the background, and by the 1980s, the encroachment by the city was complete.

Check out more Kodachromes from this farm.

That’s it for this romantic vision of the good old days via photojottings, hope you enjoyed it!