Our review camera for this week is the Minolta Pocket Autopak 460Tx.  This small camera came out around 1979 and was manufactured through the early to mid 1980s. It was pretty expensive for a 110 camera, but it had a lot of features, including manual focusing and a choice of aperture settings, which were rare back then.

The little 110 cameras are still fun, and super cheap from places like eBay.  So put on your members only jacket, your reflecto sunglasses, and let’s take a trip back to the 1980s! Don’t forget to grab yourself a few ‘cartridges’ of 110 film, they’re still available fresh from B&H, Amazon, eBay.  You can get B&W, reversed rolled ‘red scale,’ regular color print, and even E-6 slide film!

With the introduction out of the way, let’s check out the Minolta 460Tx specs.

Price; sticker on box says $72.97; I’m not sure if that was the standard retail price, or a discounted price towards the end of the product run.  Adjusted for inflation, today’s price would be around $250.  Current eBay prices range anywhere from $15 to $40 depending on condition and if it comes with the original box etc.

Build material; appears to be mostly metal with a quality fit and finish.

Viewfinder; tunnel like, but fairly bright with parallax correction lines.  Half pressing the shutter button shows a pulsating red light when the flash is charged, and is continuously red when there is not enough light for a correct exposure.  When sliding the telephoto lens in place the viewfinder shows the change.

Lens; all glass Rokkor 26mm F/3.5; multi-coated 4 elements in 3 groups, probably a tessar type design. I’m not sure if the sliding telephoto lens is included in that count.

Shutter and speed; between the lens 2 bladed, odd shaped aperture.  Claimed 1/200 second single speed shutter.  My copy tests about 1/100 second average.  Maybe the shutter has slowed over the years, or the speed was marketing BS.  1/200 seems awfully fast for a fixed non-electronic shutter.

Features; easy to load and operate. Choice of three aperture settings.  Focusing from 1 meter to infinity; plus the window illuminates when flash is engaged for easy focusing in dark conditions.   Uses inexpensive AA battery.  The camera is functional even without a battery.  Neat telephoto lens that’s actually useful.  Has under exposure warning system that consists of a continuous audible signal and red light in the viewfinder window.

Flash; recharges in about 8 seconds, range of about 13′ (4m) with ISO 100 speed film.  About 180 flashes per battery.  Pulsating orange light on back of camera means the flash is ready.  Red pulsating light in viewfinder shows when the flash is ready also.

Power; uses one ‘AA’ battery for flash and warning signals only; the camera will take pictures with no battery at all.

Accessories for this model;  some kits came with a carrying case, but that seems to be about it.

Crippling features and omissions; no long exposure setting, or tripod socket.  The ‘normal’ lens is really a bit long for my taste.

Good features; no battery needed to use.  Has built-in flash.  User adjustable focusing and three aperture settings to choose from.  Has an audible under exposure warning when half pressing the shutter, and a telephoto lens; pretty good for a 110 camera.

The Camera box top features a pretty mountain scene with a red tourist train running through it, see top picture.  It’s clearly a marketing trick to make you think you can get the same results using this camera; unfortunately, I seriously doubt it was taken with the Minolta Autopak 460Tx; the image is too sharp for what the camera is capable of producing. 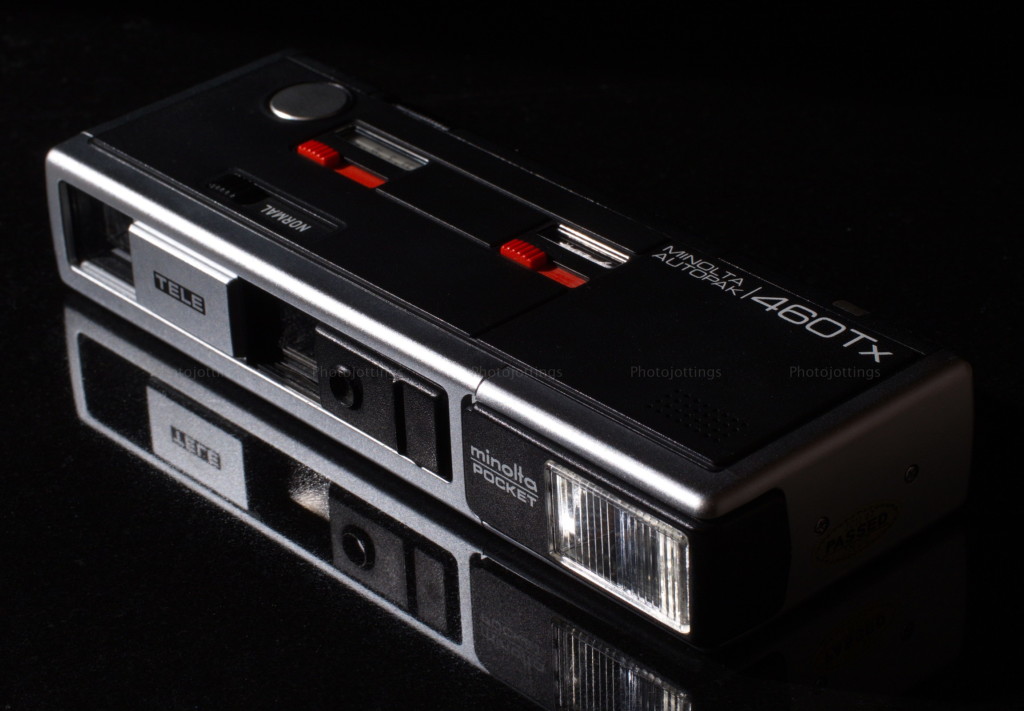 A classic 110 camera in design, but this model is feature rich. 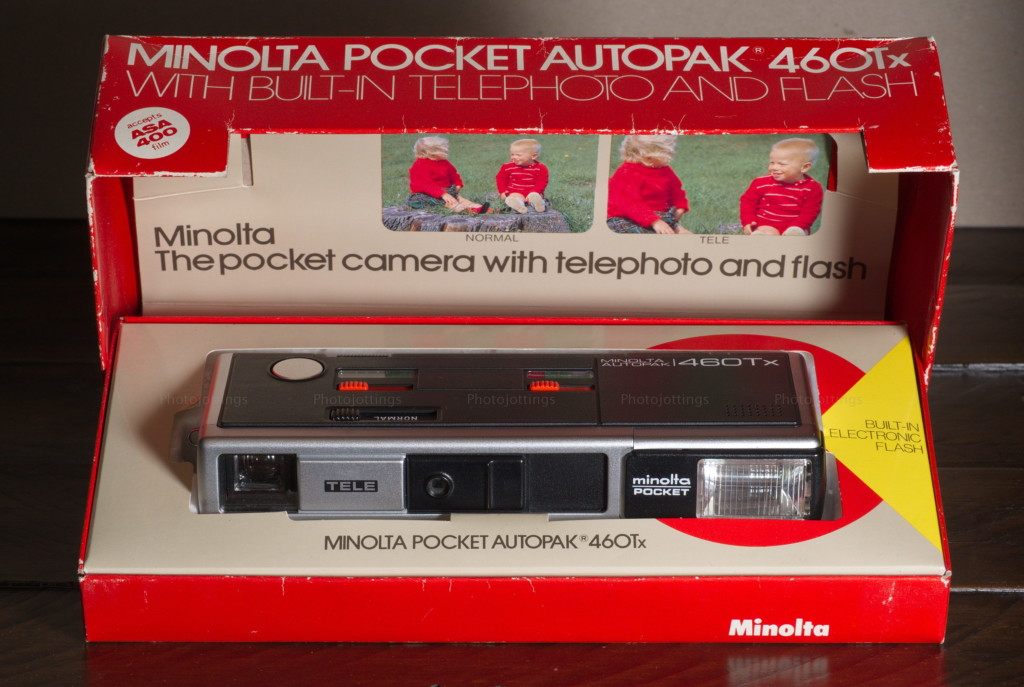 This is the No. 277 kit, which is just a presentation box with the camera and a neck strap. 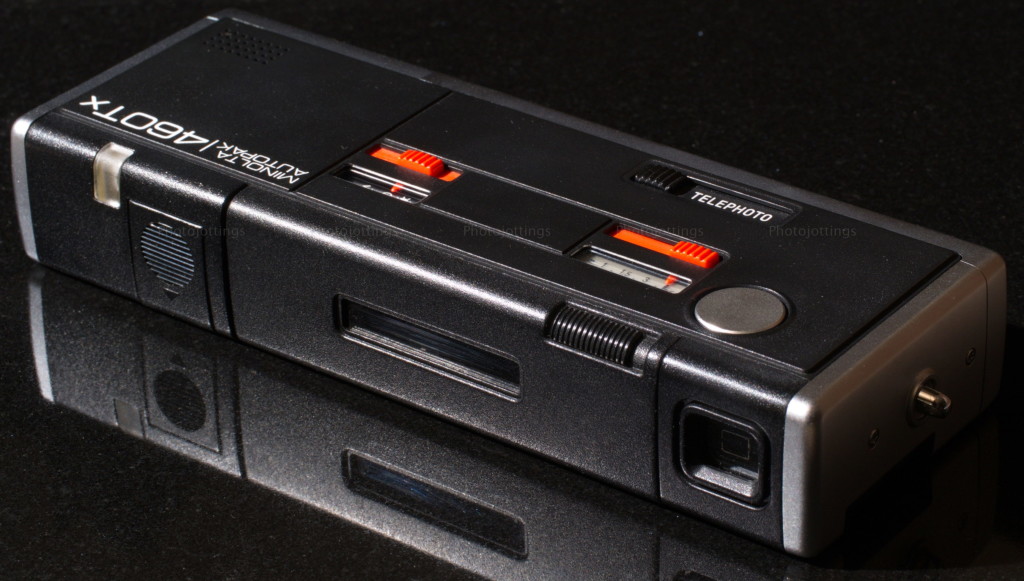 On the back from left to right; the white curved flash indicator pulsates red when the flash is ready, below and to the right is the battery compartment that accepts a single AA.  Next is the film compartment door that swings down by sliding the switch on the top right.  To the far right is the viewfinder window; you can just barely make out the bright framing lines.  The circular silver button on top is the shutter.

On the bottom is a flash range table, and the thumb winder on the right. 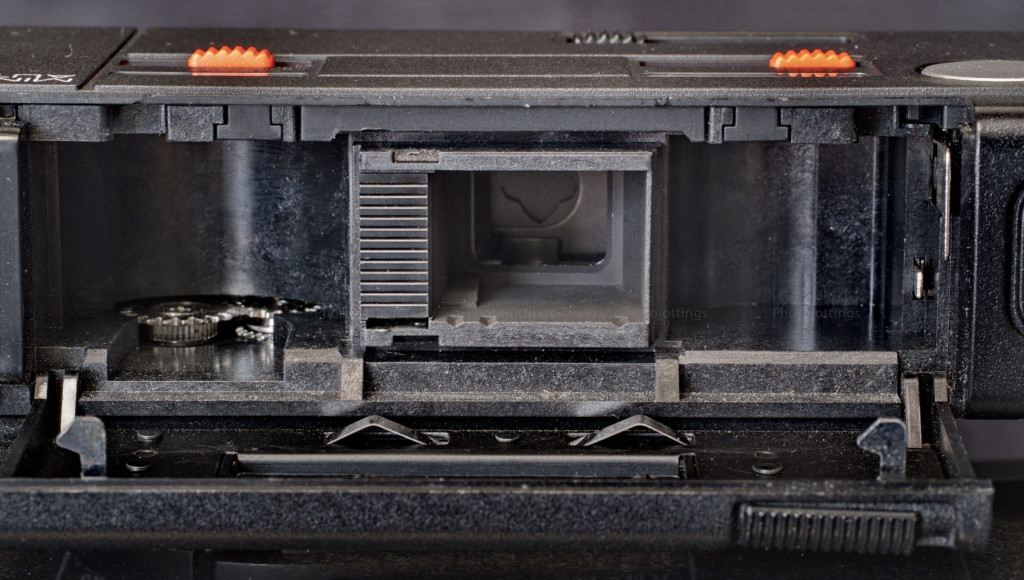 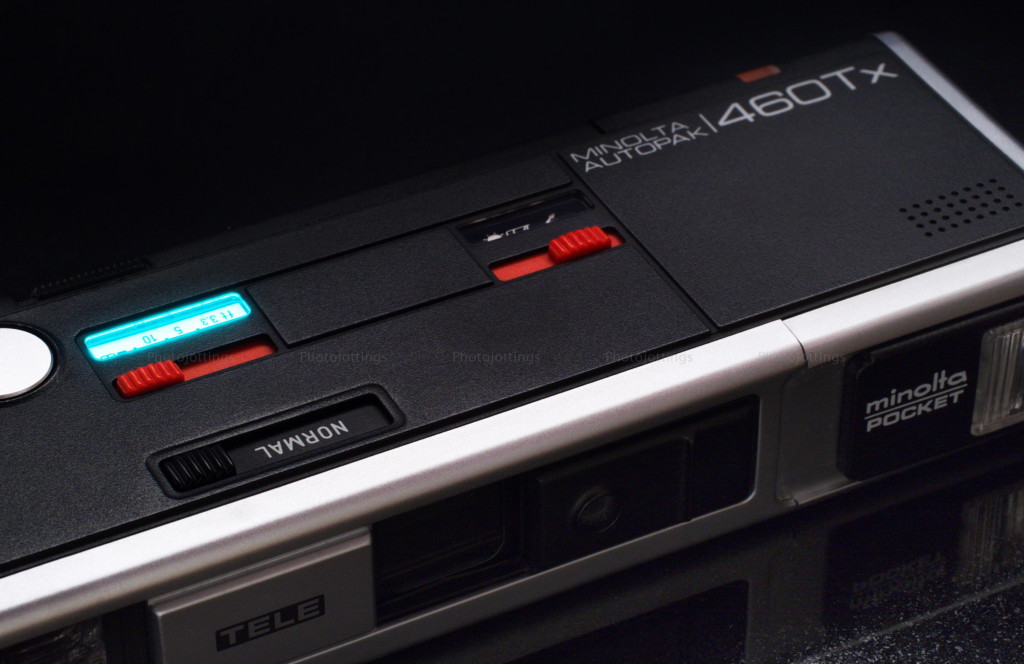 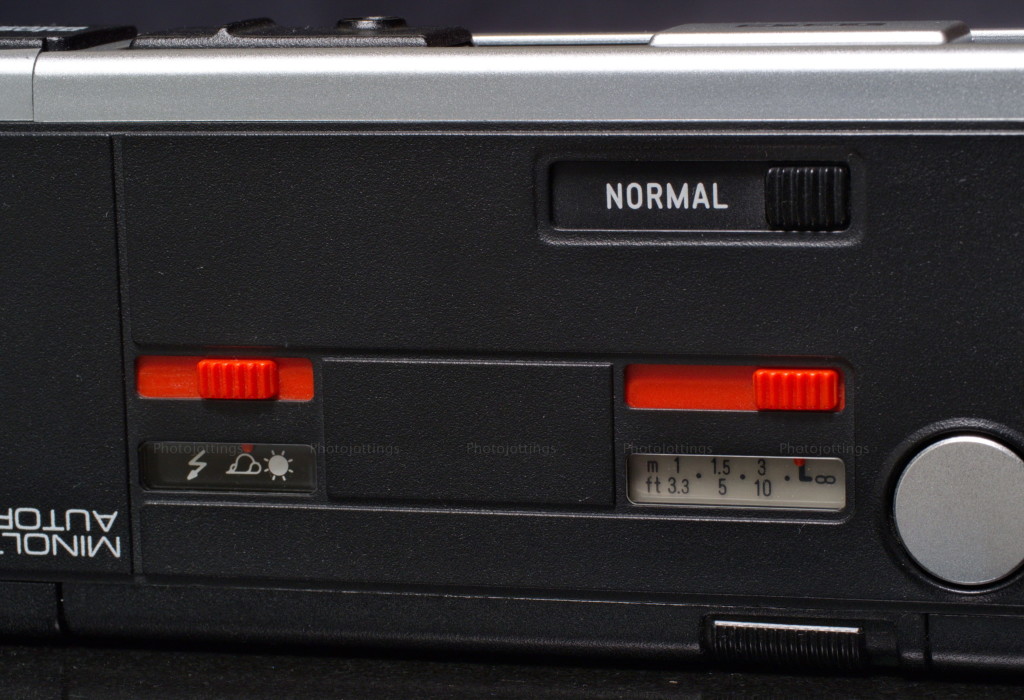 Aperture switch on left, focusing on right.  When using the normal lens, the ‘sun’ symbol on right of window is F/8, the ‘cloudy’ setting is about F/4, and the flash setting opens the aperture all the way to F/3.5.  The telephoto settings are as follows: sun, F/13.2, cloudy, F/5.6, and flash F/4.7.  On the right is the focusing scale in both feet and meters. 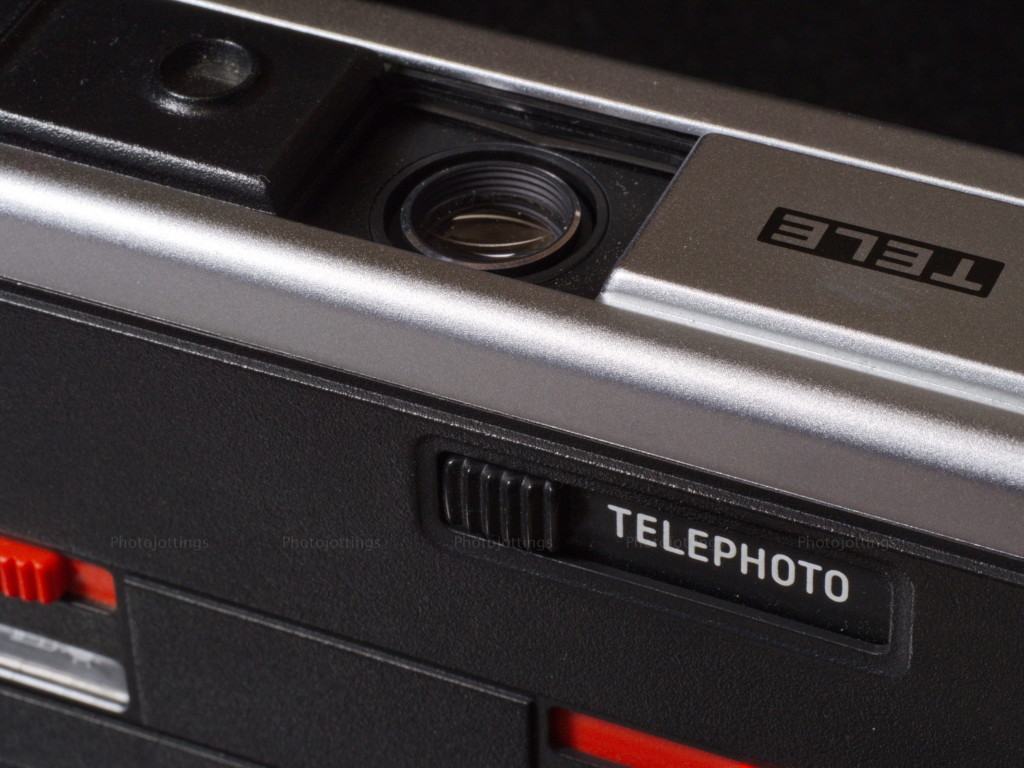 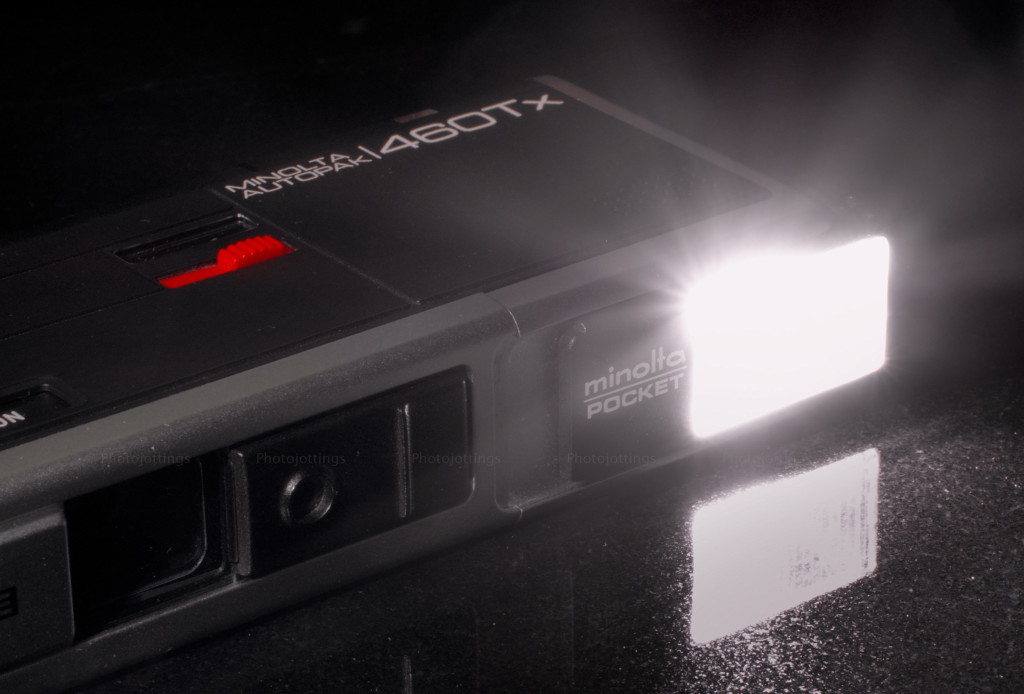 The flash is quite powerful, and there’s no way to control or reduce the output.  With ISO 100 speed film there is no problem with too much flash.

Price sticker says $72.97; I’m not sure if that was the standard retail price, or a discounted price towards the end of the product run.  Adjusted for inflation, today’s price would be around $250. 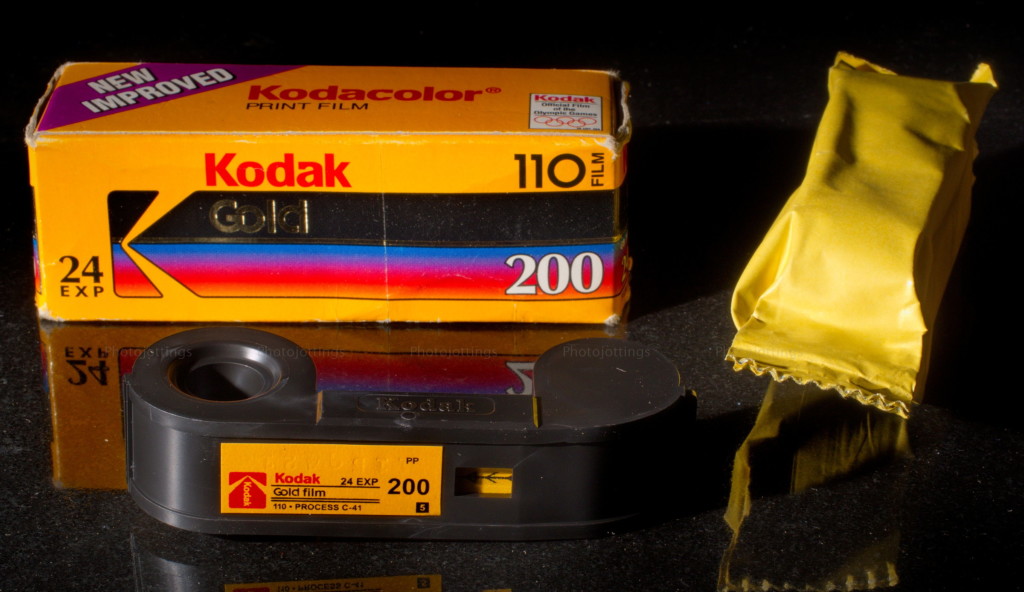 110 film consists of a box, sealed wrapper, and the cartridge.  110 film has backing paper and uses arrows to point you to the first shot while winding. 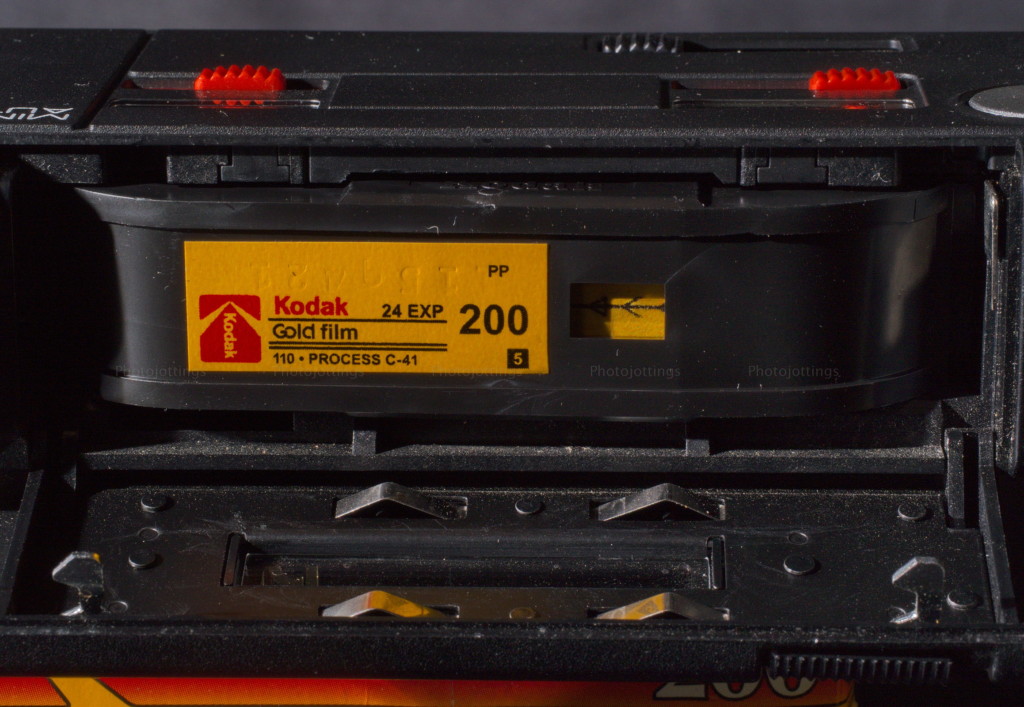 Film cartridge inside camera.  The film information (ISO number, type shot number etc) is visible in the clear plastic window between the two sets of springs on  the door.

The 110 cartridge is actually larger than a roll of 35mm film.  With 35mm film, you had to thread the film leader on to a  take up spool, not so with 110 film, you just plopped it in and closed the door. 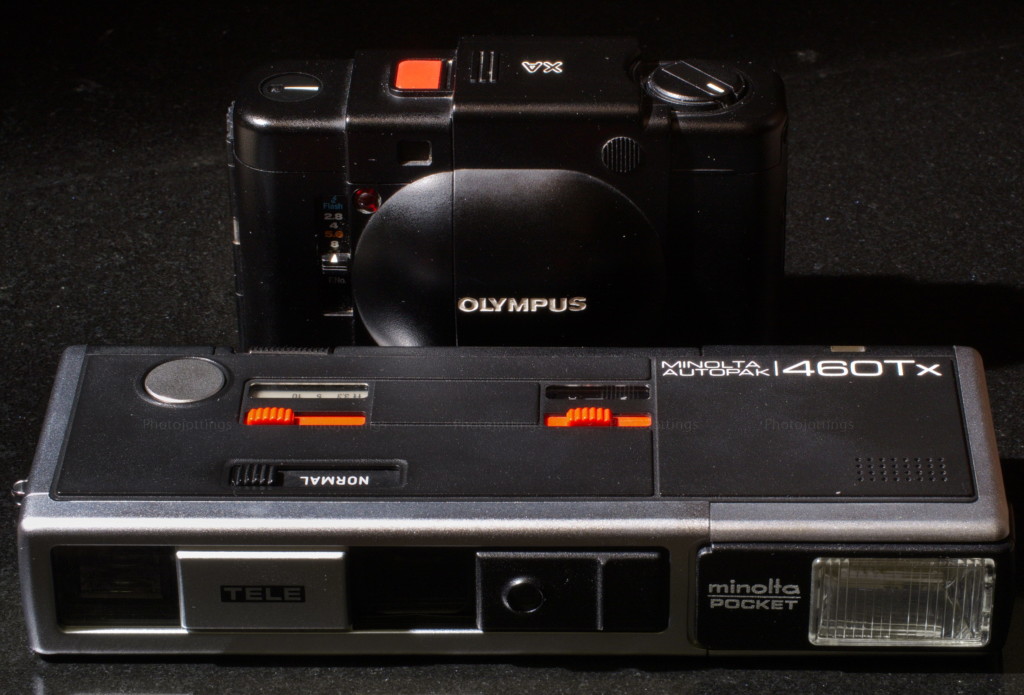 The Minolta 460Tx is noticeably larger than a very small 35mm camera, but with less resolution. 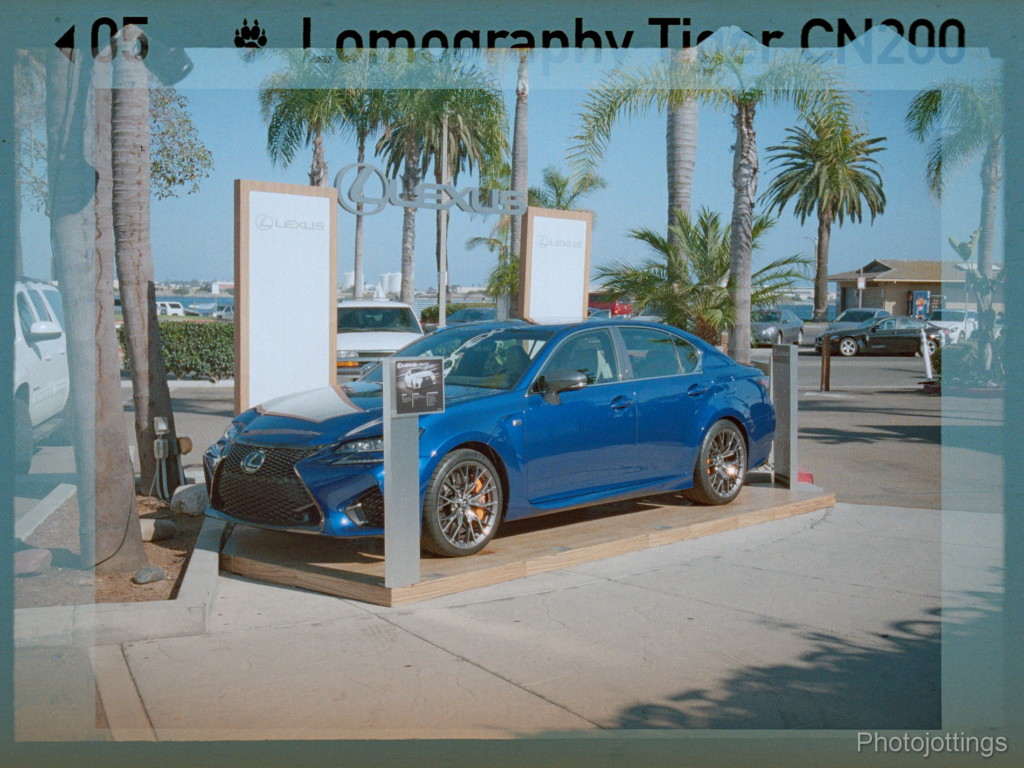 Actual image area on film, it’s quite a bit larger than the usable print area; I’m not sure why they do this.  Lomography Tiger 200. 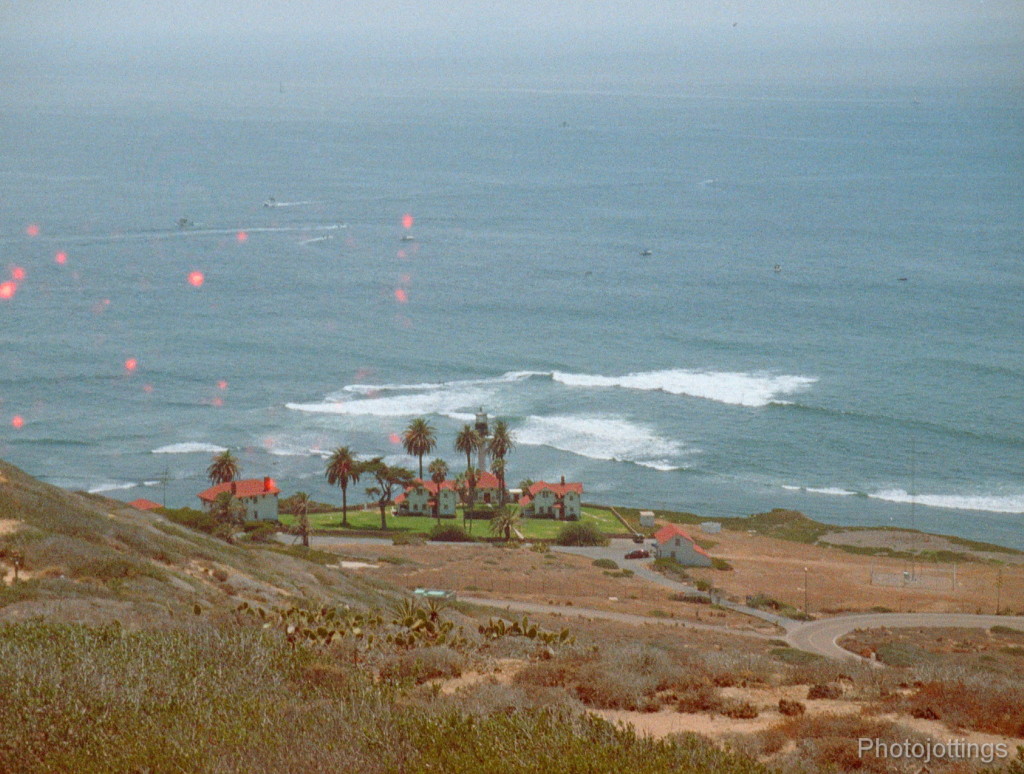 Look at the orange spots; they’re caused by pinholes in the backing paper and are random in nature, sometimes you get them, sometimes you don’t.  Oddly, the spots always seems to show up on the left side of the image.  Rumor is Lomography deliberately does this to create a ‘cool’ effect; I’m guessing it’s a manufacturing problem they can’t seem to solve, and don’t care to anyways.  Whatever the reason, it can be mitigated by putting some black tape over the clear film cartridge window so no light comes in.  You won’t know what shot you’re on, but who cares, it’s just fun to point and shoot.

They filmed part of the movie ‘Top Gun’ at this lighthouse.  Tom Cruise and Tom Skerritt AKA Viper strolled across the grass as they talked about Mavericks future after the accident. 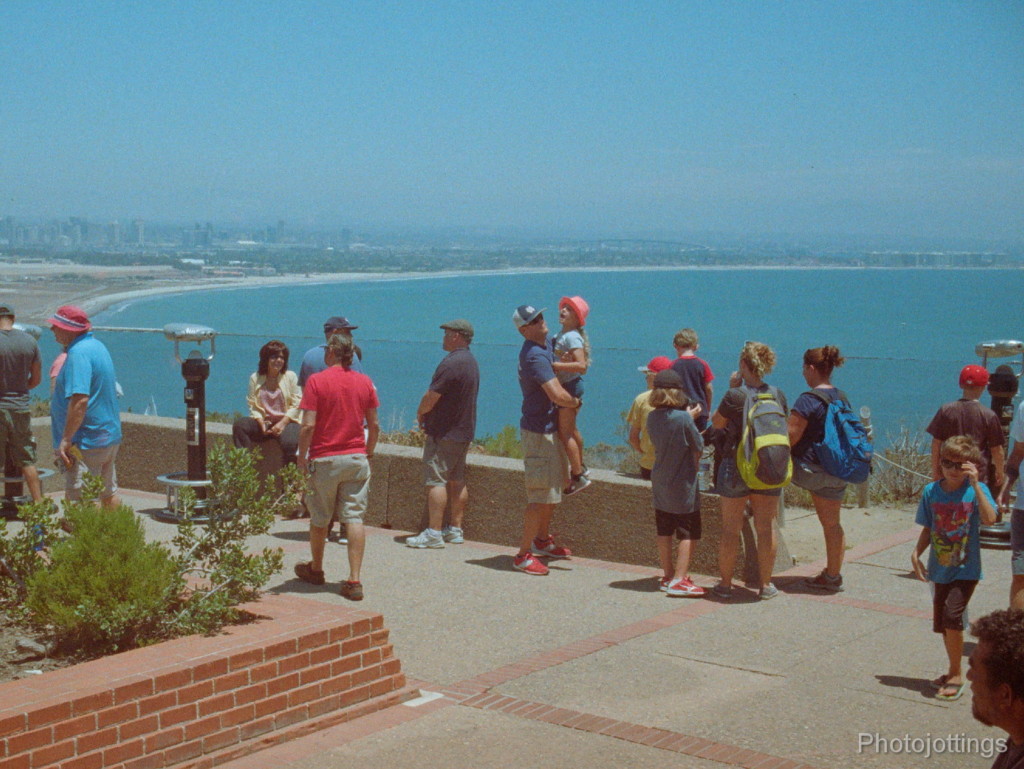 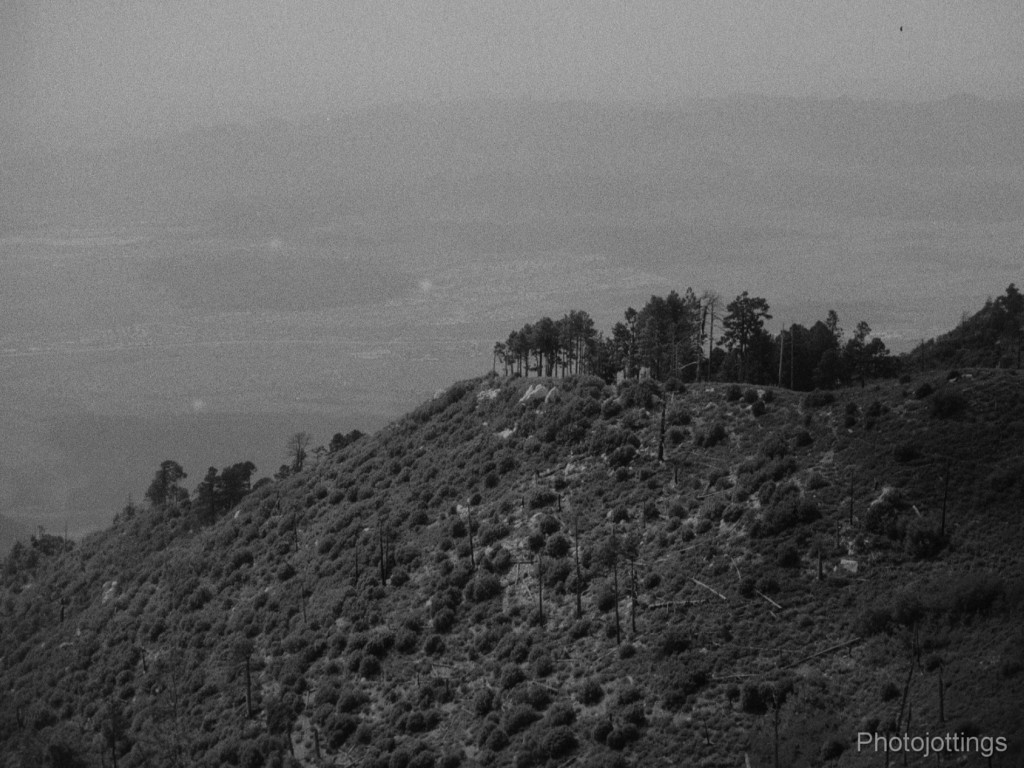 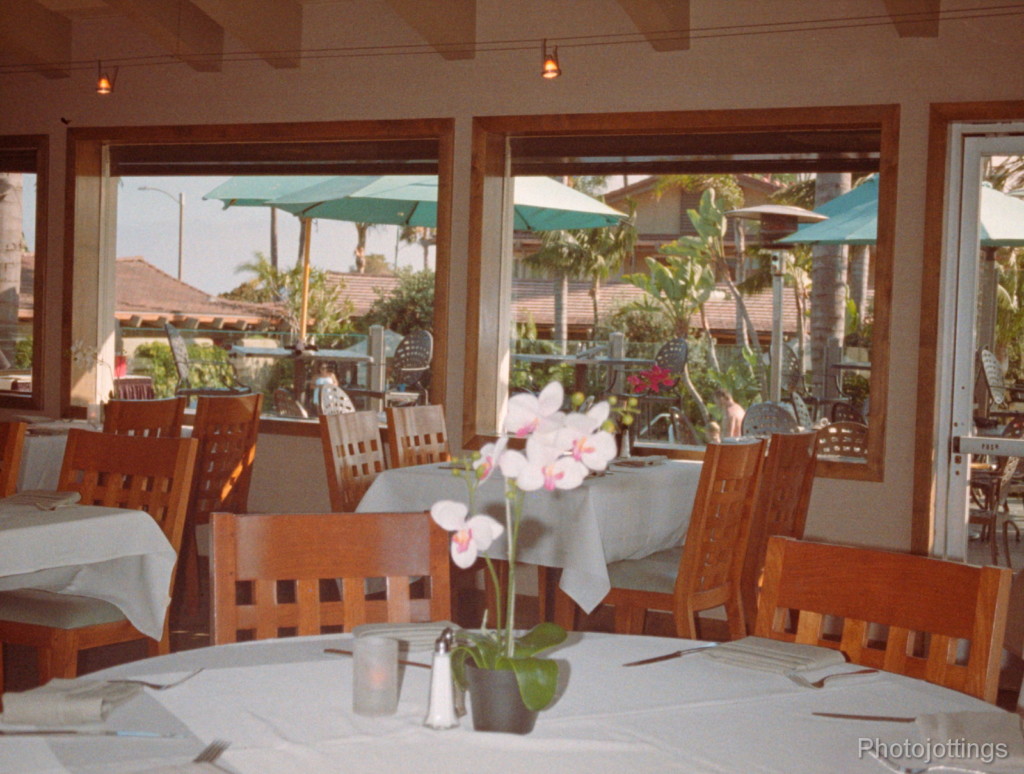 Flash interior scene with normal lens, I missed the focus on the orchid.  Lomography Tiger 200. 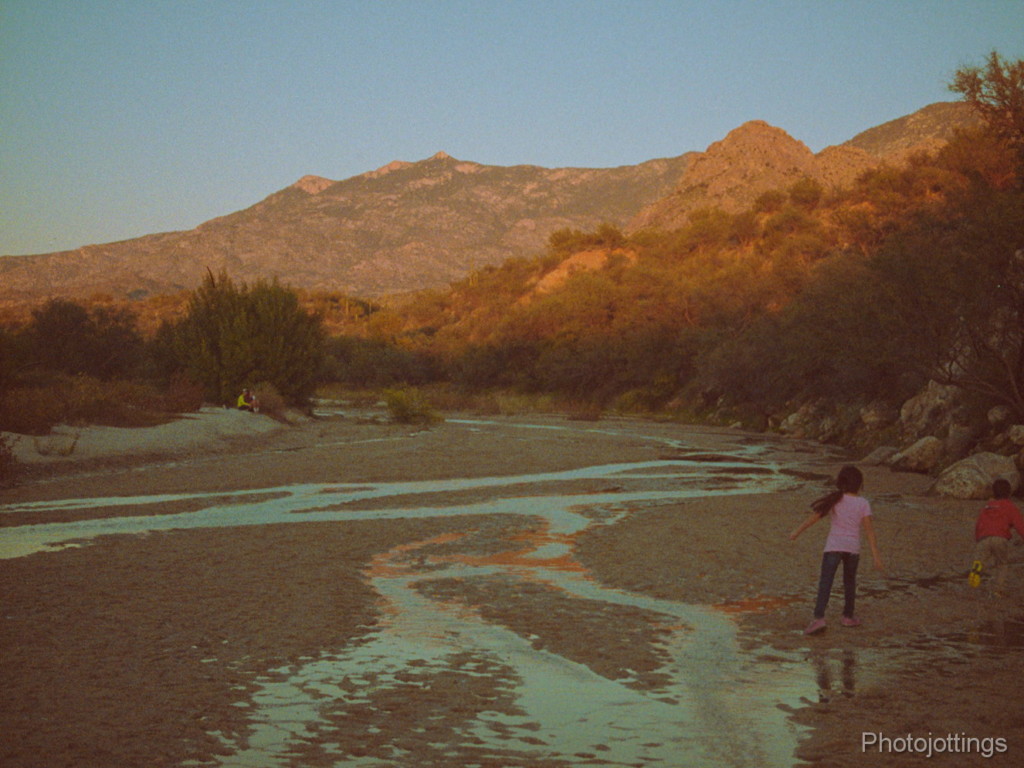 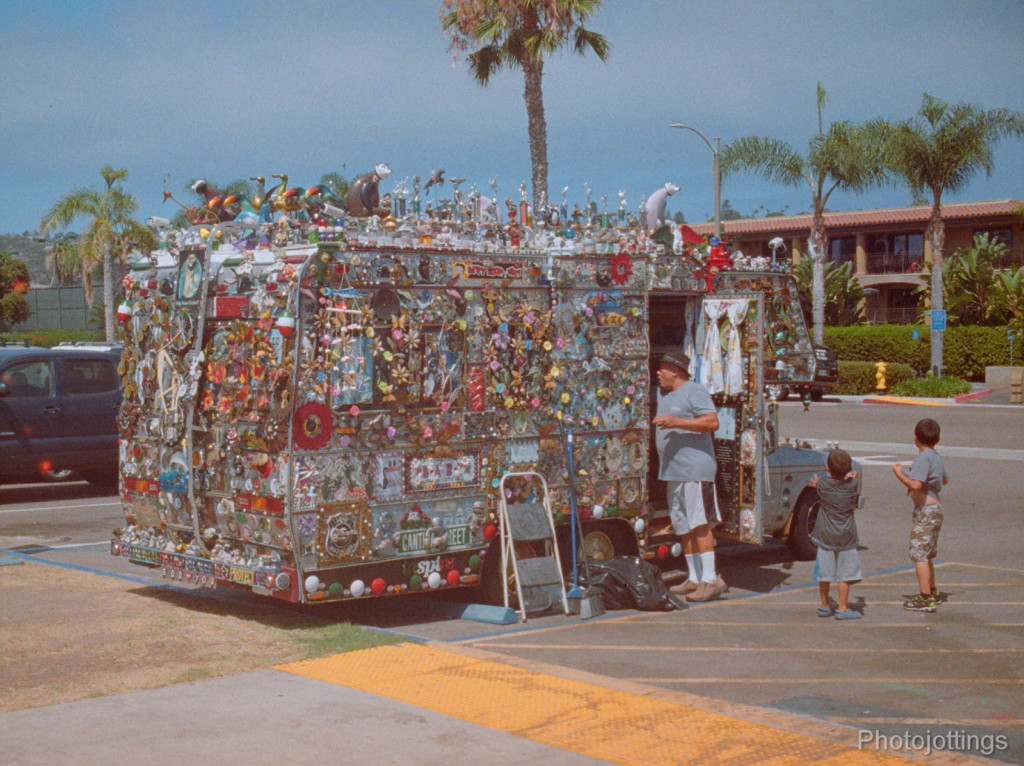 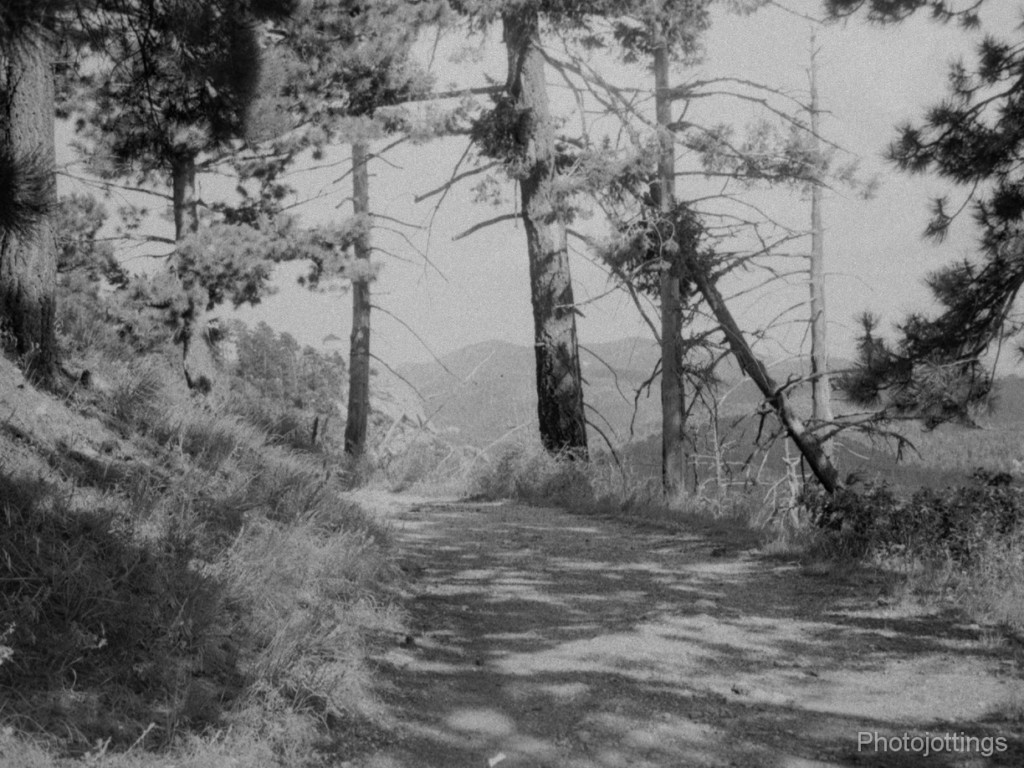 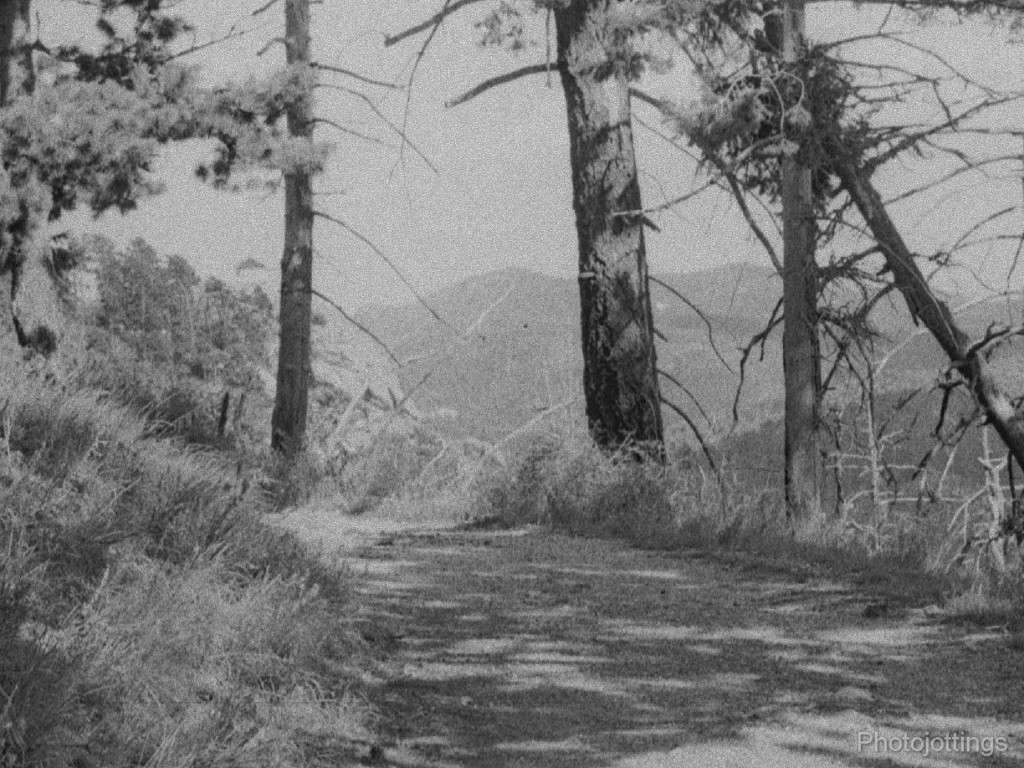 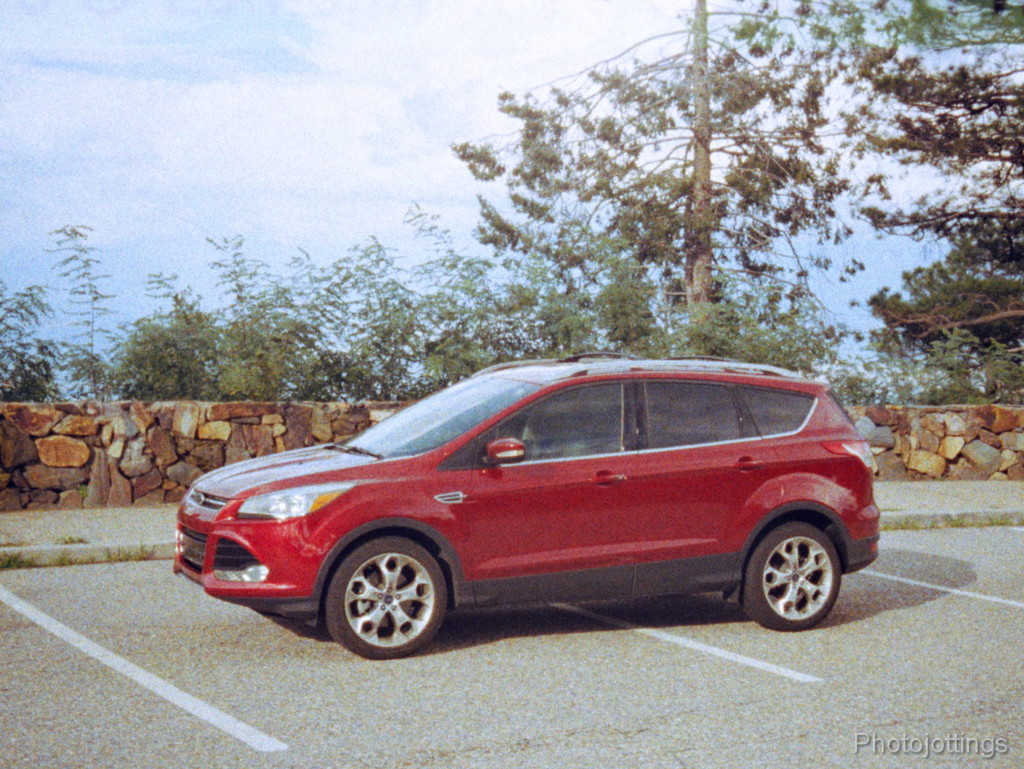 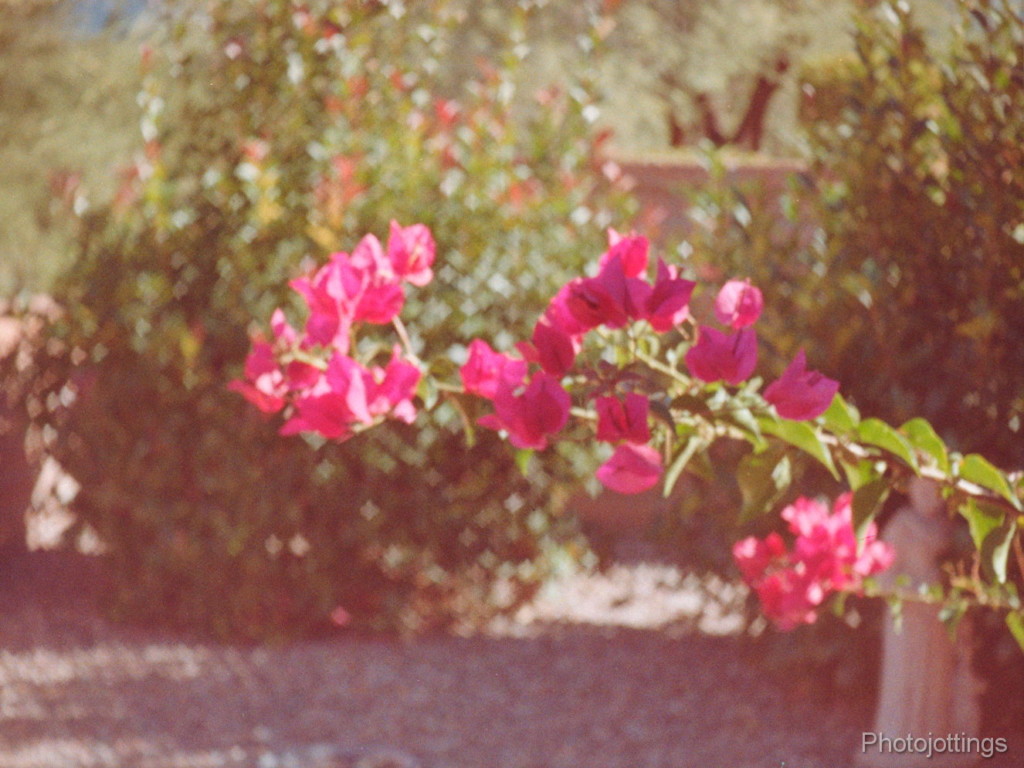 This shot is at F/3.5.  It looks like I just missed the focus on the flowers.  Check out the shape of the background blur, kinda looks like stingrays!! 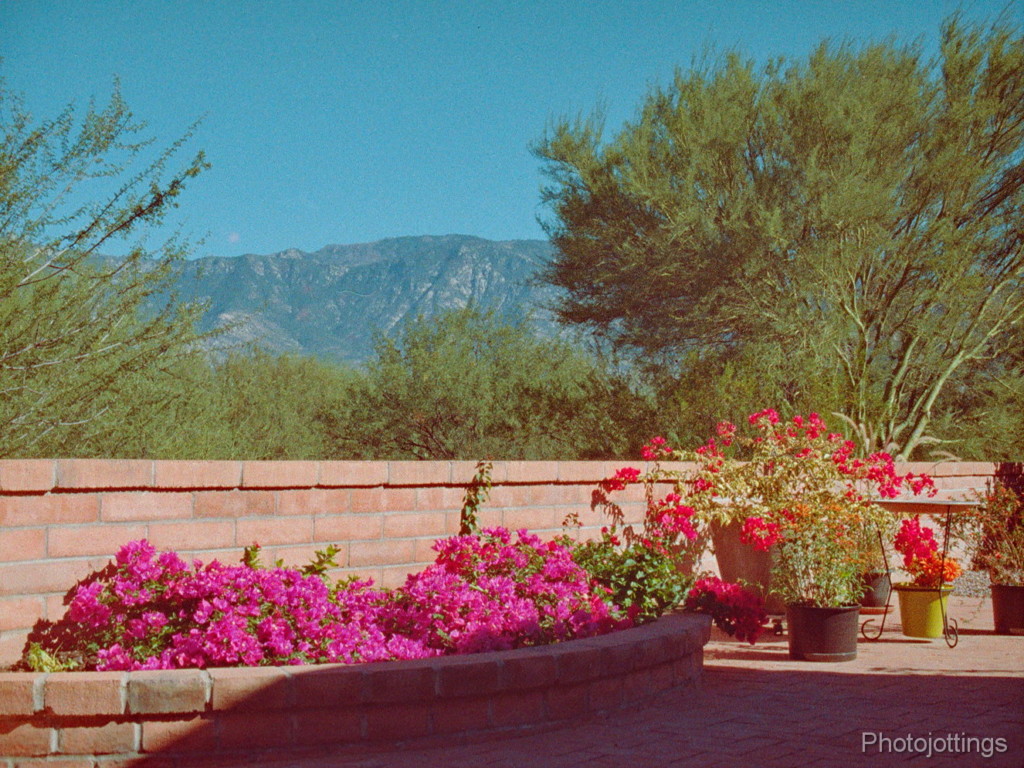 If you’ve read the whole review, you’re probably thinking dear god, why bother, there’s not enough resolution to make a decent print.  Ok, so you won’t be trading your mirrorless camera for this one, but there are some positives to report.  The Minolta 460Tx shutter speed and aperture settings exposes most film properly, especially ASA 200 speed film; the flash is totally adequate for normal fill, and illuminating a small room; the rangefinder focusing works well (and is accurate on my copy), and the camera works without batteries, what more could you want?

Even though 110 cameras won’t win any resolution awards, or the pictures won’t look very good as large prints; just remember; film is fun, especially when you take a few weeks to shoot a roll, or wait a few months to turn it in for developing, and when you get them back, you’re pleasantly surprised by all the pictures you forgot you took!  Additionally; with film, you have an original of your work, and you can hand the negatives down to your children, or sell them decades later on eBay for a few bucks per picture, like so many people do here.  Well, that’s probably not a big positive, but what the hell, it’s still fun to go out and shoot like it’s 1982!

As I’ve stated earlier, there are some choices for film.  I like Lomography Tiger 200, it’s actually quite sharp, and about the same as Kodak film back in the day, I know this as I have a bunch of negatives that I’ve scanned from the 1980s, and those photos are no sharper than today’s film.  Lomography Orca 100 B&W film is ok, but it’s very grainy, and appears to be an ortho type film (not sensitive to red) because the skies are always white with almost no cloud definition.  Lomography Peacock is ‘slide’ or E-6 film, and looks just awful all the way around, avoid this as E-6 is more expensive to develop, and the colors make me want to puke.  I guess it’s made to cross process in standard C-41 chemistry for that cool ‘film gone bad’ look so many people like now days.  Lomography Lobster Redscale is a color print film that has been reversed spooled, so you’re shooting the image opposite of the emulsion side; pardon me, but I’think I’m ready to puke again.

I’ve used the Nikon Super Coolscan 9000 ED at 2400dpi, for everything here; that gets all the info out of them, and with cropping and leveling, you’ll wind up with approximately 1600×1200 very sharp images using Lomography Tiger 200 film.