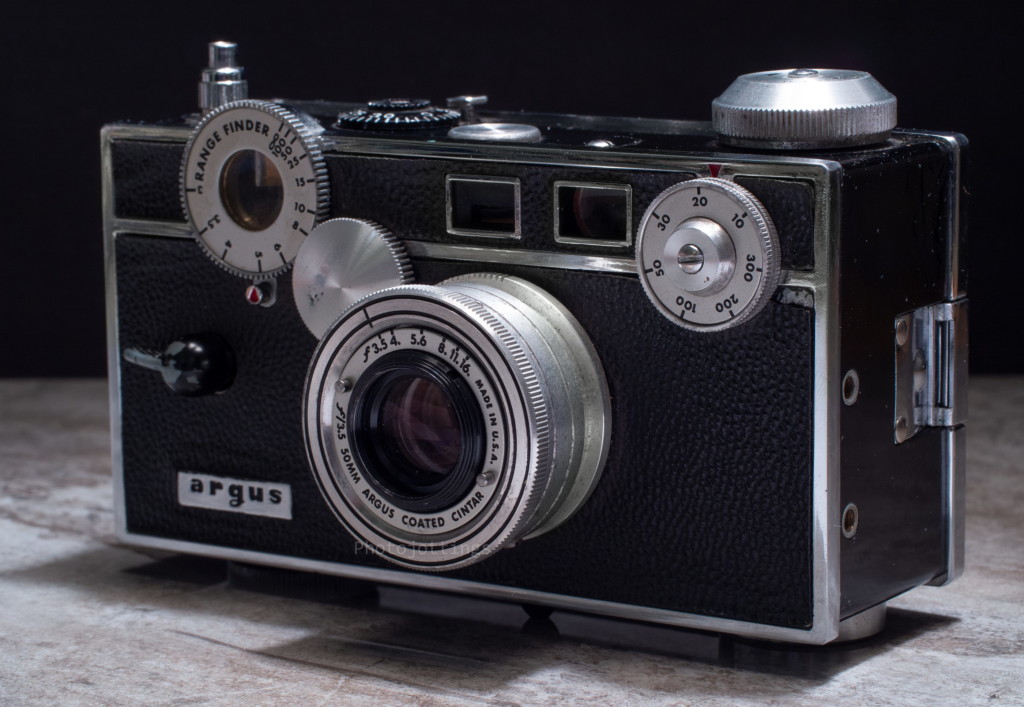 One day last fall a client asked me if I liked cameras, to which I replied yes, (glad I wasn’t a smart aleck that day by saying no…) and she handed over this excellent working Argus C3 with a few accessories.  Actually, I hit the mother load; the very kind Lady ended up giving me a dozen cameras originally purchased new by her late husband, mostly in good to excellent condition, and all working and complete!  So now I have enough material to keep new reviews coming for the next several months and beyond!!

The Argus C3 and variants have been around for a long time, at least since the late 1930s, and literally millions were made.  Thankfully, it seems (by going here) a sizable portion of those cameras are still readily available in working condition; apparently as a result of the simple and robust build quality and easy repair procedures.

The C3 is affectionately called ‘the Brick’ by devout users, (or ‘lunchbox’ in Japan if you believe wikipedia), obviously because of the size, weight and shape.  The exposed gears design feature seems more along the lines of heavy industry as opposed to fine clockwork.  When I look at the front of the C3, I think of this photo.

The ‘brick’ is an interchangeable lens camera, and when purchased new it came with an Argus Cintar 50mm F/3.5 lens, supposably a Leica Elmar clone, but there are also more lenses available from Argus, a 100mm telephoto, and 35mm wide angle, both ‘sandmar’ designated models.

So with the pleasantries aside, let’s head back into the early 1950s, when this particular camera was made, and see if we can get some quality pictures from our ‘brick!’

Made in; Ann Arbor Michigan, USA.

Date of manufacture; approximately 1952 based on the serial number, go here to check yours.

Price; according to period magazines, about $60 in 1955 as a ‘kit’ which included the camera with lens, flash and a carrying case.  Current eBay prices range anywhere from $25 to $100 or more depending on condition and if it comes with the original box etc.

Box contents; the ‘kit’ came with a flash and carrying case.  Some boxes were navy blue in color with white lettering.

Aperture; has ten straight aperture blades and stops down from F/3.5 to F/16 in one stop (marked) increments, but you can use in-between settings also.

ISO; has reminder dial on back.

Viewfinder; small and dark.  Viewfinder image is much tighter that the actual capture area; see pic below.  Additionally, it has a coincidence type rangefinder with a yellow colored (lower) patch that’s fairly easy to see.  The relief is fairly extensive, meaning you don’t need to press your eyeball right up to the glass, and even eyeglass wearers can see the whole image.

Lens; 50mm F/3.5 Cintar, hard coated using magnesium fluoride according to literature that came with the camera when new.  Lens is apparently a four element Cooke Triplet variation, not a Tessar design. Takes Walz #101 series filters that mount directly to the lens ring, and Tiffen series #5 adapter and lens hood.

Shutter and speed; simple diaphragm type with three shutter blades and seven speeds from 1/10 second to 1/300s, plus bulb mode.

Flash; no built-in flash, but it does have contacts on the left side of the camera for a proprietary flash unit.

Accessories for this model; the most popular are; a carrying case, flash, filters and hood.  There are a couple more lenses that are commonly available; a 100mm F/4.5 Tele-Sandmar, and a 35mm F/4.5 wide Sandmar.

Crippling features and omissions; no double exposure prevention, self timer or accessory shoe; and the shutter cocking lever is too close to your fingers when holding it.

Other versions; C2, but has no flash contacts.

Go here to see the owner’s manual, and make sure you tip the site owner. 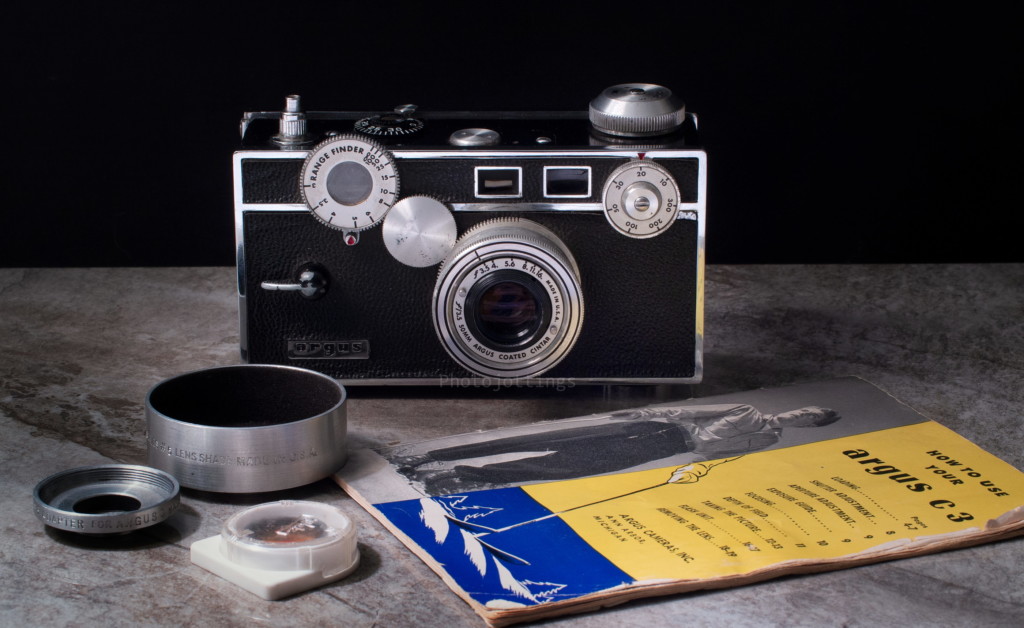 The Argus C-3 has a very distinctive shape, and is called ‘the brick’ and ‘the lunchbox depending on where you live.  Here is the owner’s manual, Tiffen brand aftermarket hood, and adapter.  The small filter in the white case is a ‘Walz’ brand #101, and fits directly to the lens, no adapter needed.

Loosely collected evidence suggests the Argus Cintar lens is  a rigid copy of the collapsable Leica 50/3.5; and with that said, I’m not going to take apart the lens to find out.  In this view you can see the two flash contacts on the left side of camera.  The flash is proprietary, but are easily found here. 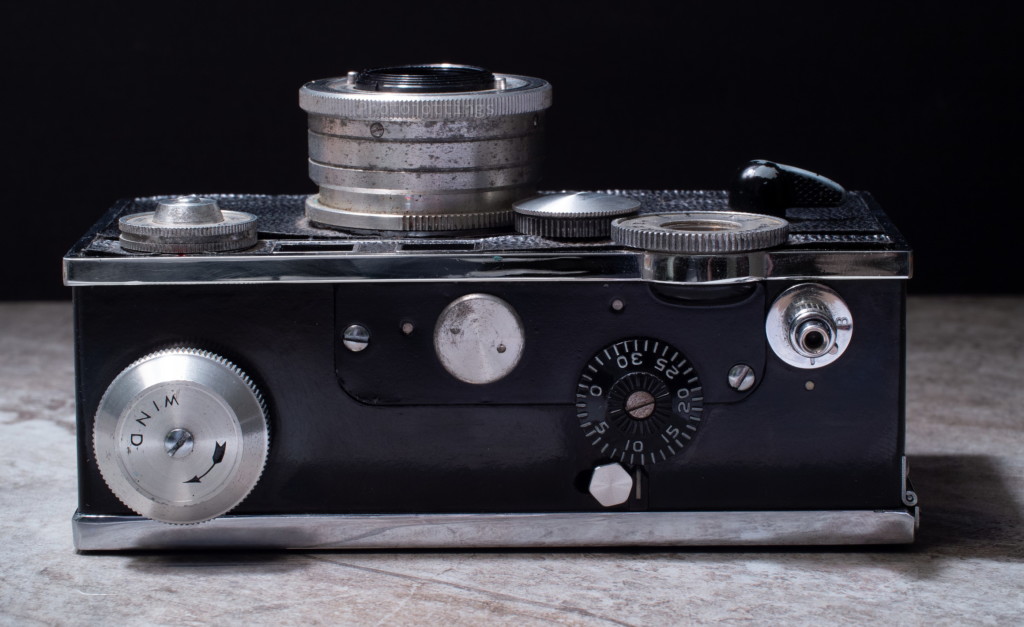 On top of the Argus are several round knobs; the large one on the left is for film winding, this only turns after you slide and hold the hexagonal button below the shot counter.

Next is the rangefinder adjustment cover; it has two spanner pins for aiding removal—note; don’t screw with this adjustment unless you know what you’re doing.

The black dial with numbers is the shot counter.  When you load and advance the film a couple of frames, set the counter to number 1, and you’re ready to go!

The circular plate on the right contains the shutter button (with threads for cable release); you also get either instant or bulb mode by turning the shaft to your selection and lining it up to the white dot. 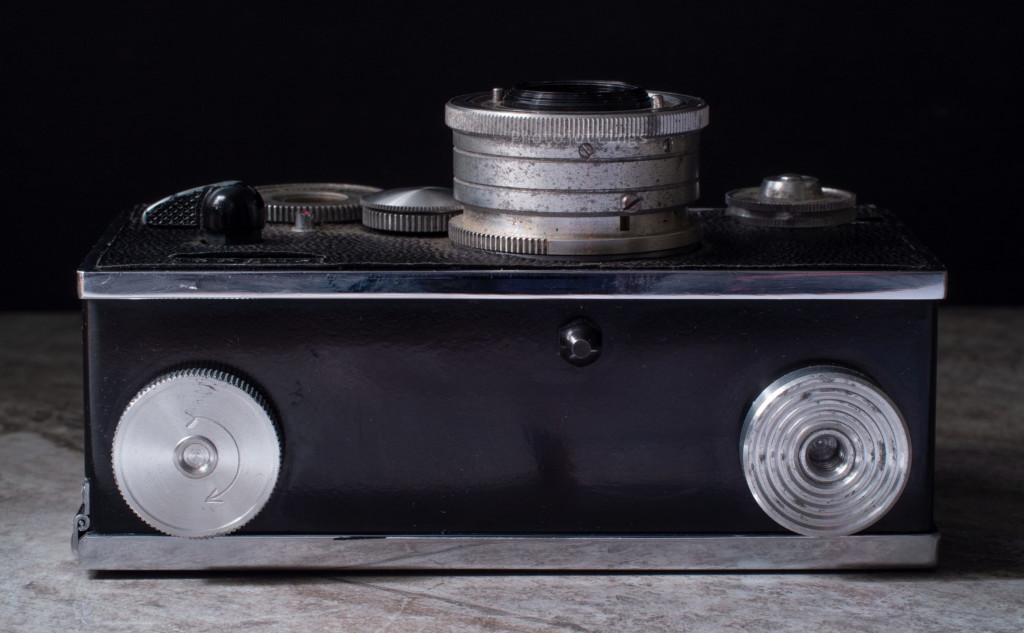 The bottom of the camera reveals the film rewind button on the left, and an off center ¼-20 tripod socket over to the right, and not centered on the lens.  The lens is set at close focus in this view.

You open the back cover by pushing in on the thin metal tab located on the left side, and in back of the flash contacts. With the back open the internals are quite ordinary; a metal film pressure plate and advance sprocket, with the body being plastic, including the film gate. 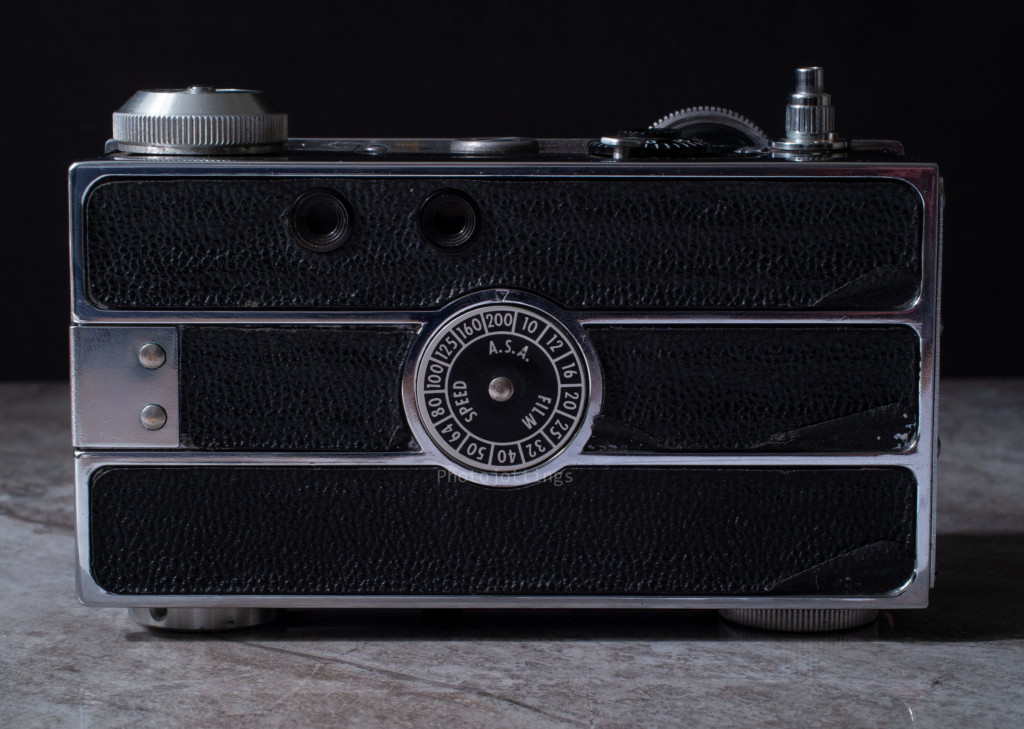 The two black circles above are; the viewfinder (on the left) and the magnified rangefinder on the right.  The rangefinder is magnified for easily seeing the split image, with the lower half having a yellow filter for additional help with correctly aligning the image.  The viewfinder relief is fairly extensive, meaning you don’t need to press your eyeball right up to the glass, and even eyeglass wearers can see the whole image. 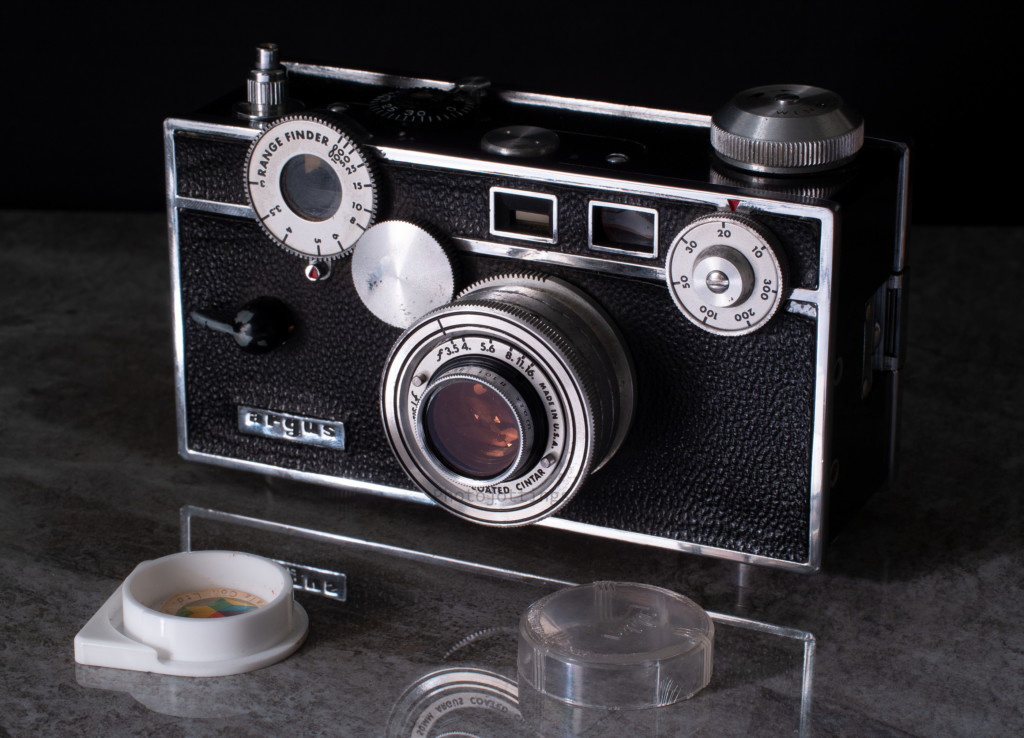 The front of the camera has all the controls for taking the picture.  The shutter speed is set using the dial on the right in the picture, it goes from 1/10 to 1/300 second, but can be set ‘in between’ settings too.  The aperture is set by turning the inner lens ring using the two protruding pins that are positioned opposite each other, you can choose F/3.5 up to F/16, or any setting between those.

Here a Walz series #101 80A filter has been mounted to the lens. These tiny filters have front threads, so you can attach the hood over the filter, a nice feature for this type of camera. 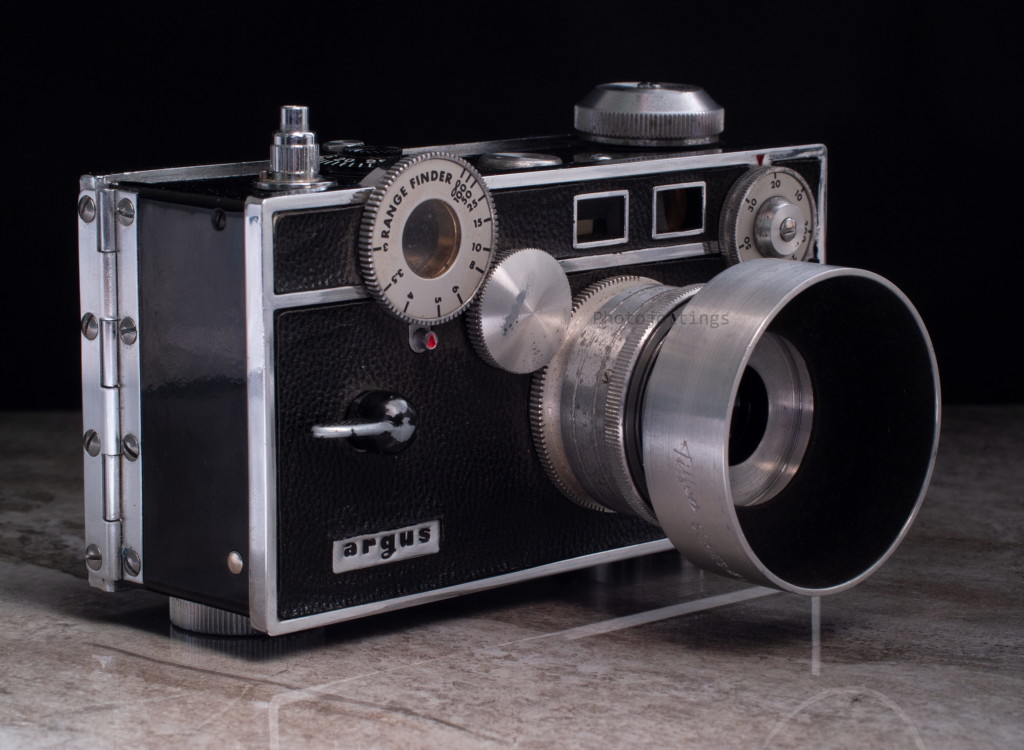 The shutter cocking lever is above the ‘Argus’ plate on the right of the camera.  I think Argus picked a poor spot for this; when holding the camera, my middle finger touches the lever, and makes the shutter stick by not allowing it to go through the full timing motion.  So the middle finger to Argus for this design flaw.

Here are a few samples for your viewing pleasure.  They’re about 3500 pixels wide, which shows all the detail present in the negative.  Click image for a larger version.  Scanned on a Nikon Coolscan 9000 ED.  All pictures taken with Kodak Gold 200. 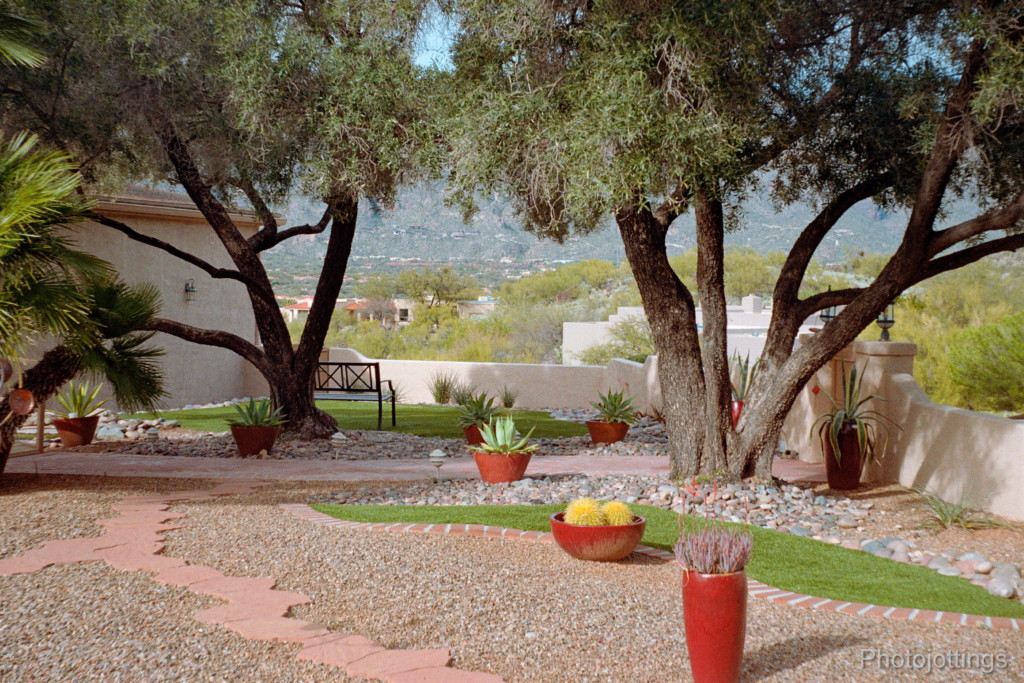 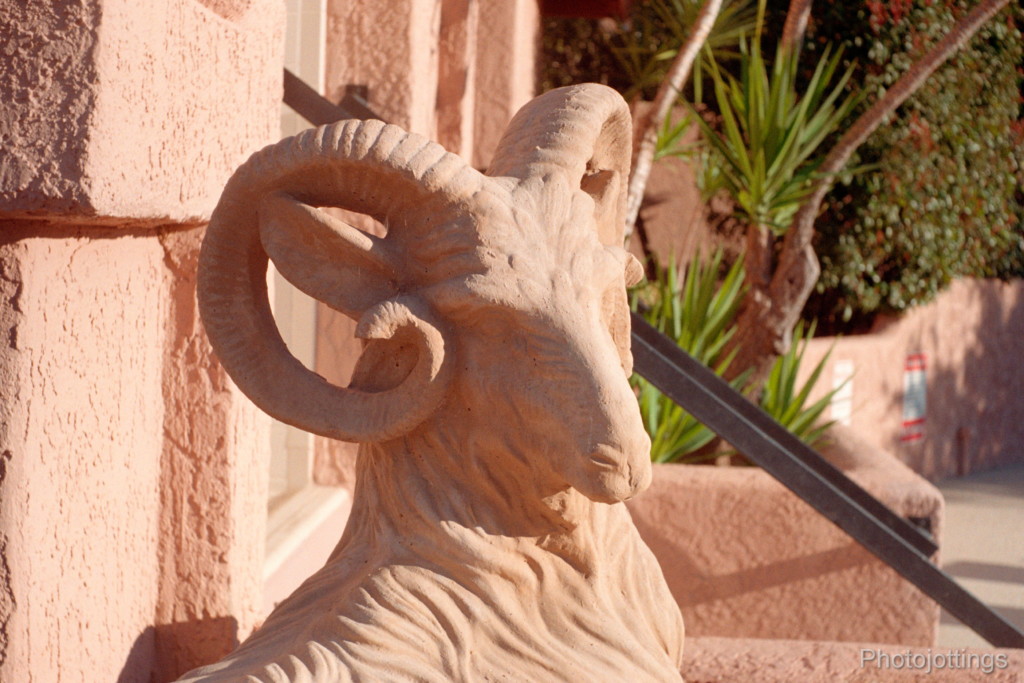 Rams Head, close focus, and the rangefinder is dead-on!! 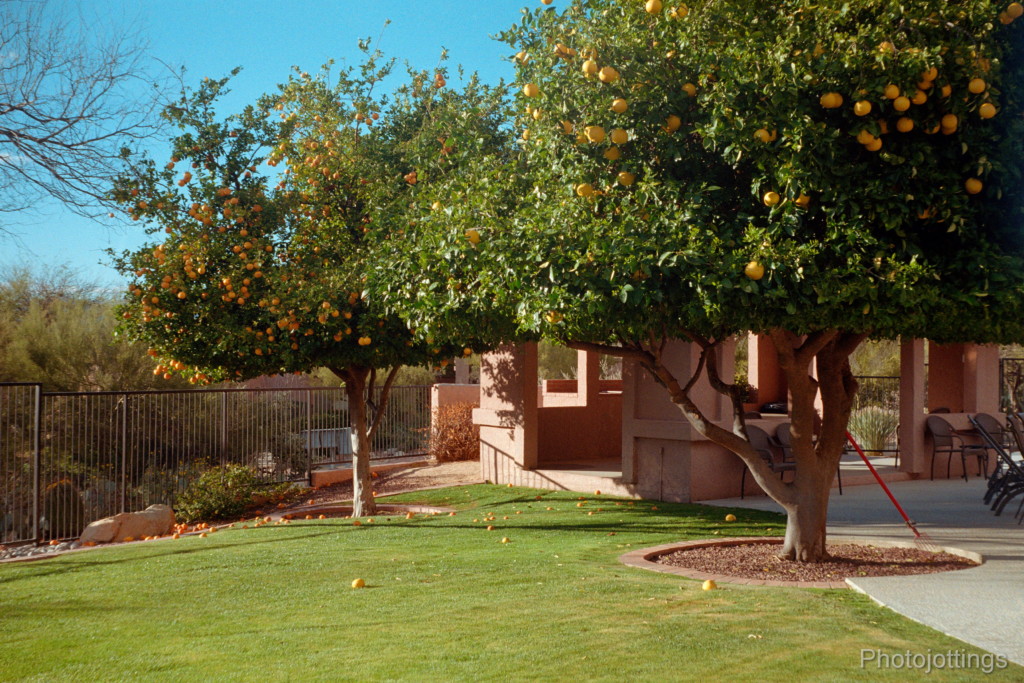 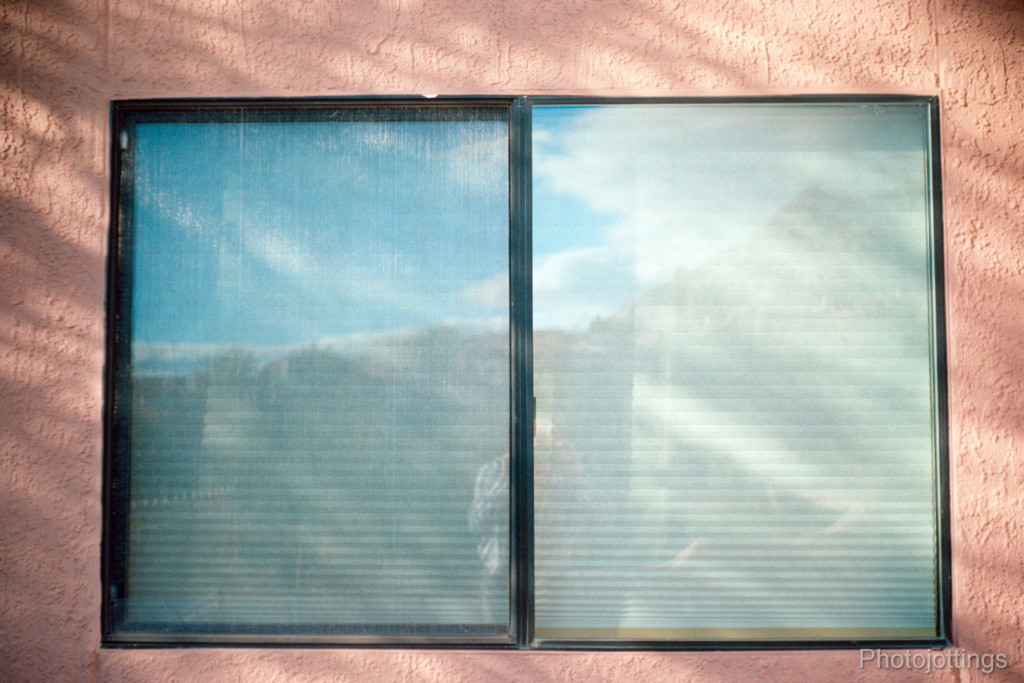 The window took up the entire viewfinder, but the actual coverage is what you see here. 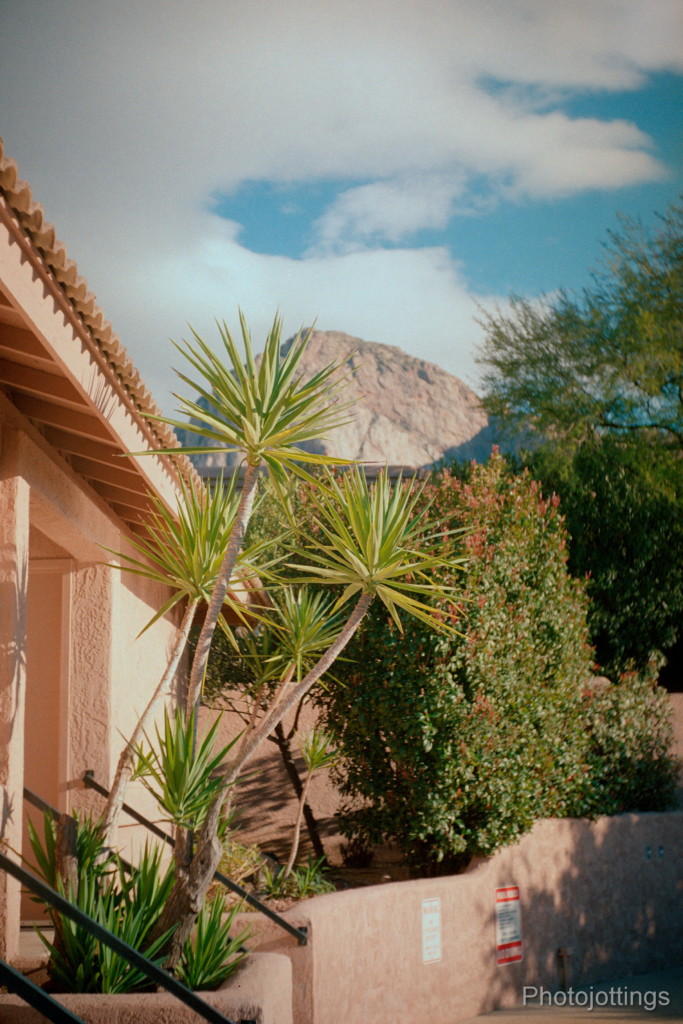 Spineless Yucca; not sure of the aperture.  Excellent rangefinder focusing again.

All test shots are displayed at 3500 x 2334 pixels wide when enlarged, and that’s all the resolution included in the film.  Scanned on a Nikon Coolscan 9000 ED. 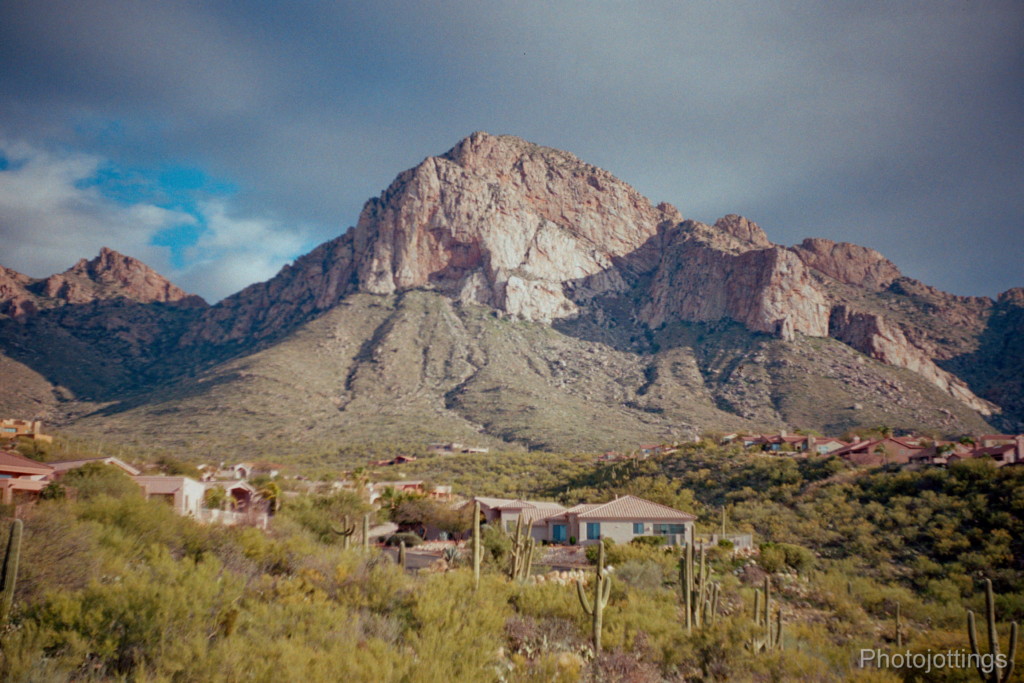 F/3.5.  I see heavy light fall-off, and a lack of resolution and contrast all over, not really unusual characteristics of lenses from this era used wide open. 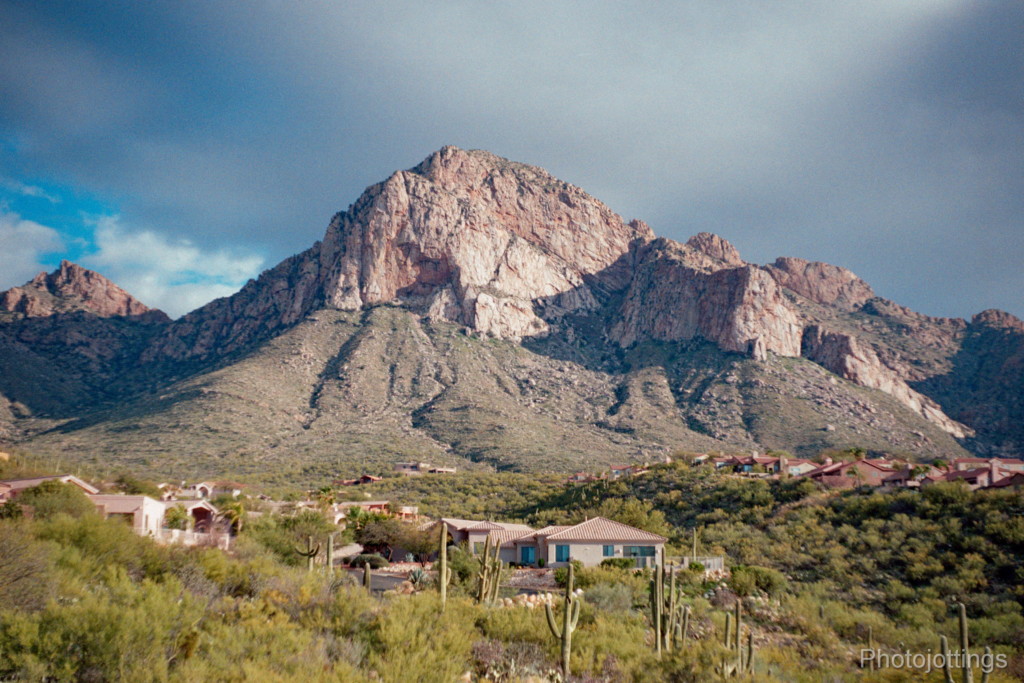 At F/5.6.  A big jump in contrast and resolution, and with less light fall-off. 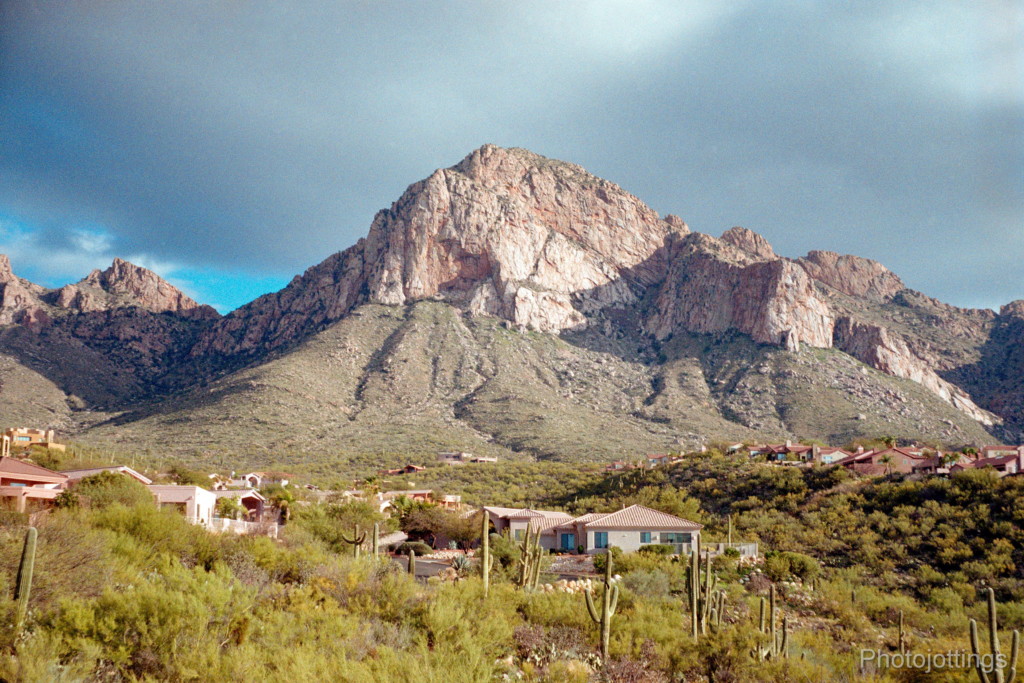 Here we see another big jump in contrast and resolution at F/8, a pretty sharp picture all around.  Unfortunately, there are no F/11-16 shots as they were blurred from camera movement, I’m not sure what happened; I used a tripod with cable release, maybe it was the longer exposure times.

The Argus C3 ‘brick’ turned in a pretty good review, and it was fun to use, it’s a goofy looking camera for sure, but I like it.  The C3 is fairly simple to operate, although there are more steps to go through than a typical rangefinder, it’s basically wind the film, cock the shutter and fire.  The rangefinder on my copy is dead on which really helps with getting sharp shots, especially at closer distances.

The ‘kit’ Cintar 50mm F/3.5 lens is a bit dull wide open, but sharpens up nicely at F/8, with good color and contrast.  Argus thoughtfully added threads to the front lens protrusion so you can mount either filters, a hood, or the combination as you see in the picture above.

As far as ergonomics go, the C3 is near the bottom of the ‘totem’ pole if you will.  The shape is of a brick, and it’s the same as holding a brick, which is not the most comfortable object to hold.  The Viewfinder is small and dark, and it’s hard to compose unless you’re in bright light.  The shutter cocking lever seems to be in the worse place possible, making contact with my finger as I’m holding the camera, which keeps the shutter from snapping closed like it’s supposed to and ruining shots.  Also, the film winding procedure is not the easiest to do; you have to push and release the hexagonal button to the left while turning the winding knob until it stops, then remember to cock the shutter—and don’t forget; there’s no double exposure prevention.

All said and done, the Argus C3 is a fun camera to take with you for informal snap shots, and as a conversation piece, but I’d save the serious stuff for better cameras like the olympus SP 35, or if you like really old cameras, the Kodak Retina.

I’m giving ‘the brick’ one thumb up for use, and two thumbs up for looks!   Please consider buying through my links and help support the site. Thanks for visiting!