Here’s a brief look at the Sony 16mm F/2.8 Fish-eye lens.  Scroll down for the main review.

This is the intentional distortion created by this lens, I just took this standard test shot to show you how much you can expect.

Full frame cameras bring out the best in this lens, and that’s massive distortion, and the 180° field of view.  Notice how the adobe wall seems to “bulge” out.

I wouldn’t bother using this lens on an APS-C camera, such as the A700 used here, the distortion and field of view makes it look like a wide angle lens with bad distortion control.  Both shots from each camera were taken from the same point.
Bokeh crops next.

The F/2.8 crop shows hard edges on the circles, but one stop down to F/4 and things look smoother.  The crops above were taken from the middle of the image.  I wouldn’t worry much about noticing “bokeh” on this lens unless you’re shooting at the minimum focusing distance with a large aperture.

Ghosting control is fairly poor, as seen above.  When the sun is in the image, (plan on it if it’s sunny out), there are magenta blobs clearly visible, but severity depends on angle and aperture.  As you stop down, you’ll see a ring or two around the sun when centered.  Don’t try to use your hand to block stray light, as you will probably get your hand in the image, and won’t notice it until after you download your images to your computer.  Wash-out from the sun seems to be well controlled.
Light fall-off.

Light fall-off is mild to moderate at F/2.8, and is nearly eliminated a stop or two down.  Close focus with a wide open aperture shows less light fall-off than at infinity focus.  The lines at the lower left corners are from the edge of the panel I used for measuring light fall-off.

General use photos below. 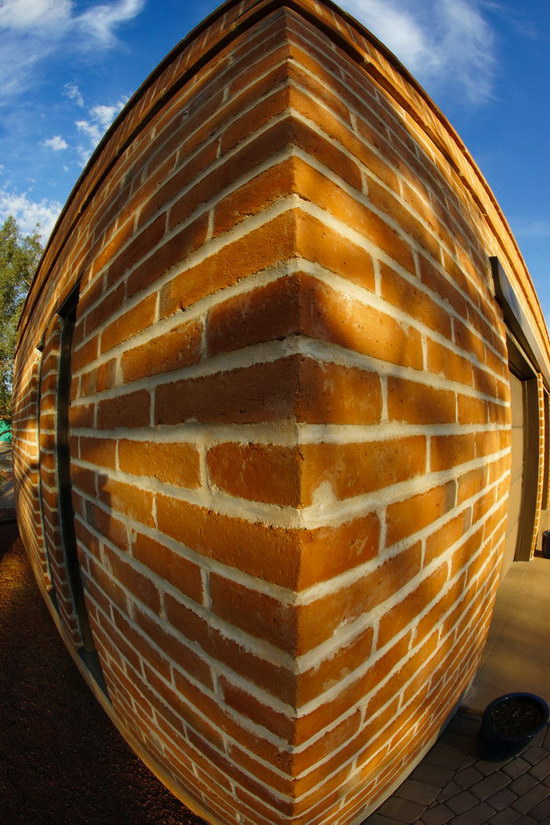 This is a 90° corner from a house, the distortion makes it look like a ship’s prow. 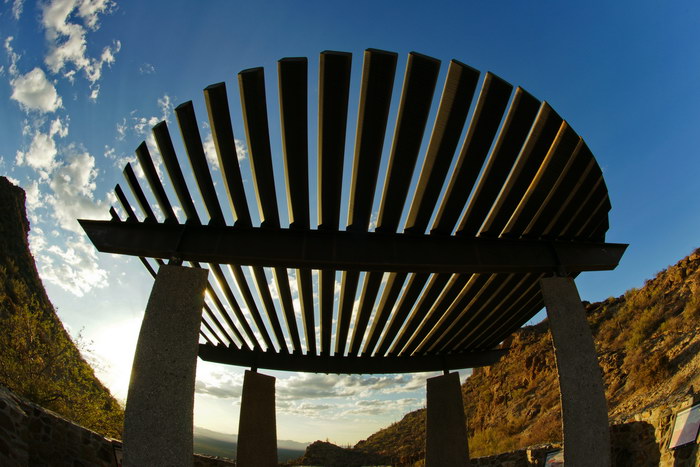 In this picture, the left and right side mountains behind the gazebo appear much steeper than in real life.  Even in this small image, color fringing is noticeable along the outline of the left mountain. 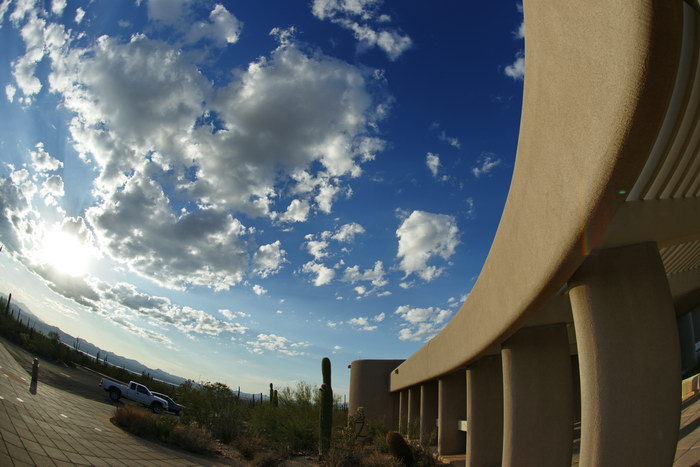 This architectural shot displays what this lens will do to straight lines near the edges.  The roof line of course is straight in real life.  Notice the ghosting at middle right. 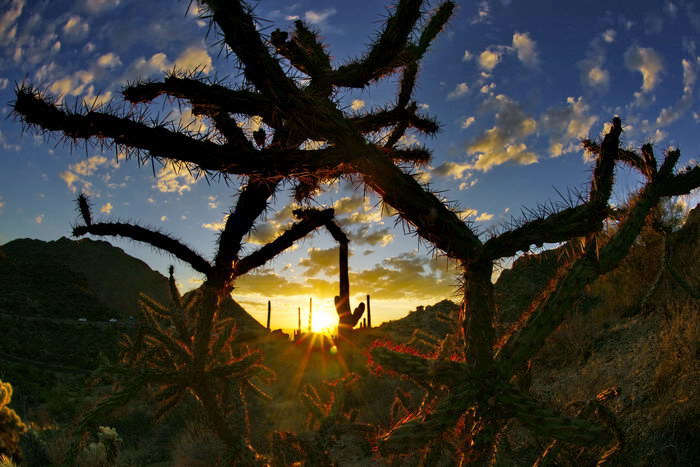 The camera was jammed inside this Cholla cactus, allowing a close cactus and expansive mountain view, F/16. 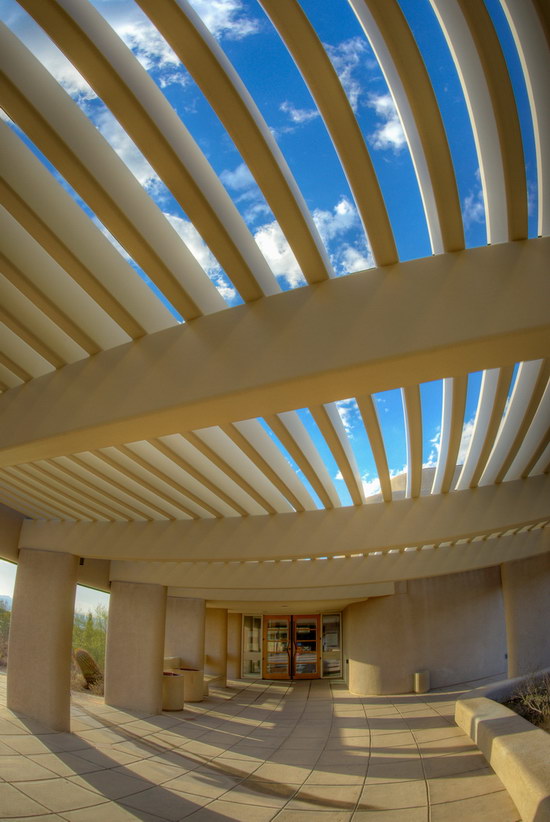 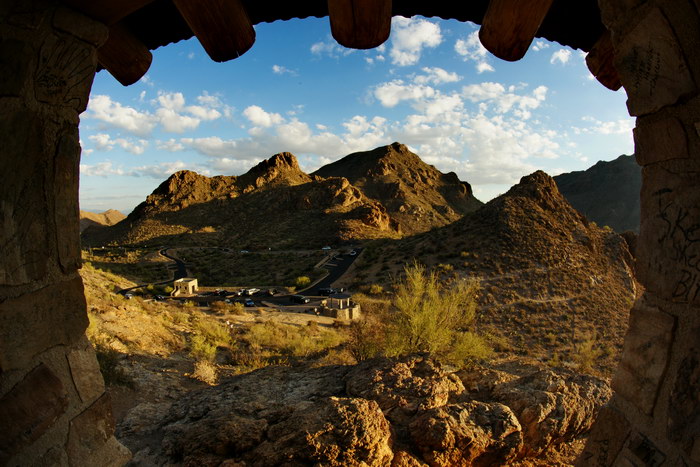 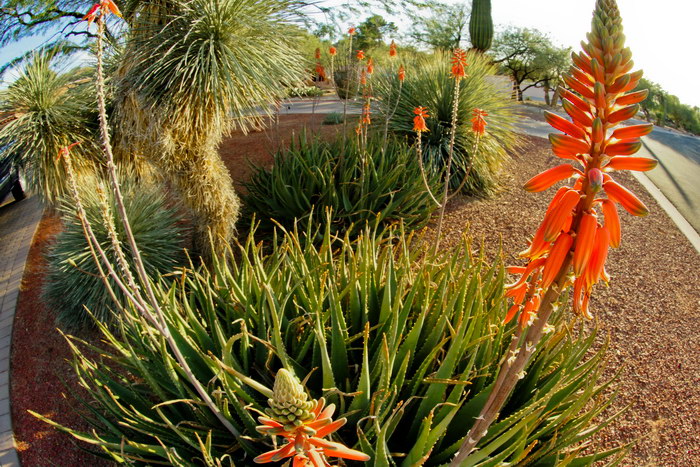 This image was taken a few inches away from the flowers at F/22. 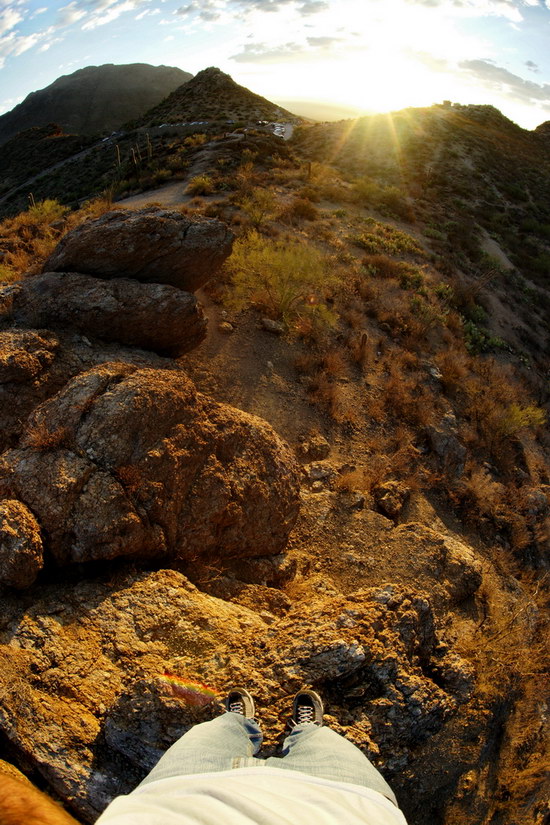 This shot illustrates what will likely happen to you at least once if you’re not paying attention.  Although I deliberately got myself in this shot, there were several shots where I found my shoes somewhere along the bottom edges of the image.
All images above are full, resized images, and are unique to the distortive qualities and 180° coverage of this fish-eye lens, a conventional 16mm lens would not produce anything similar.
Center and corner sharpness.
Below are crops from the image centers and corners.
The centers look good at F/2.8, and don’t seem to sharpen up much by closing the aperture, that’s typical of ultra-wide angle lenses though.  The corners are a different story.  Due to the design of this lens, and the way it’s normally used, the corners don’t look too good until stopped down to F/11.  This lens covers a huge area, and as a consequence, the distances apart for center objects and periphery objects can be enormous, so if you focus on the centers, or infinity, the objects in the corners may be physically much closer, causing them to be out of focus, and stopping down the aperture increases the depth of field, and helps bring everything into focus.

You can also see some lateral color fringing in the corner crops, which doesn’t go away by stopping down, check more out below. 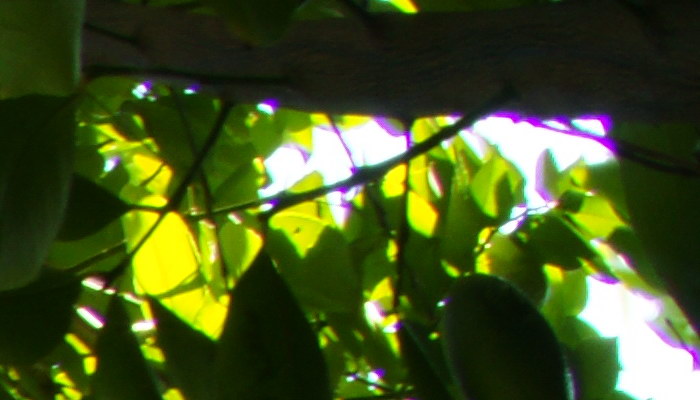 Here’s some good old fashioned purple fringing, like you used to see in some fixed lens camera’s not too long ago.  This crop was taken from the last 700 pixels at the right top of the original image.  This CA is pretty strong, and does show up in smaller, screen size shots.
Coma samples.

Coma is not something to concern yourself with on this lens.  If you’re bothered by stuff like this, then you probably can’t appreciate the intended purpose of this lens.  Exposure differences are from light fall-off. 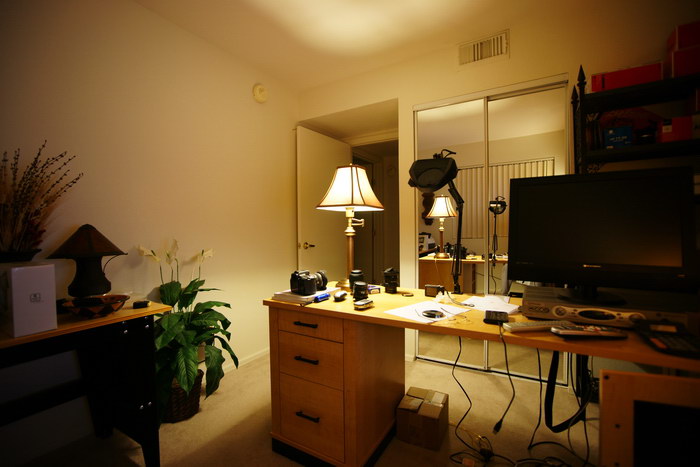 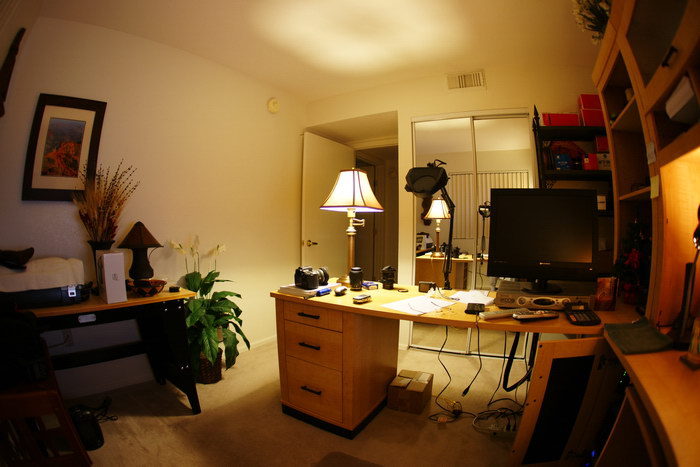 This 16mm fish-eye shot shows the huge coverage difference between a conventional 16mm lens and 16mm fish-eye.  Both images were taken at the same spot, at F/2.8.  You can see some axial color fringing at the lamp shade in the center with the fish-eye lens.  The scene here is my office where this wonderful site is generated, and the entire room measures about 10’x10’or 3.05m x 3.05m.

Initially, I didn’t think I would like this lens, but after a full month of experimentation, I’ve decided I really like it, and may use it instead of my Sigma 12-24mm lens because of the massive coverage, which is my “thing.”   I like the extraordinary perspective you get with this lens, and not so much the distortive effects, but that’s just me.  Because the strongest effects occur at the image periphery with a full frame camera, for which this lens was designed, those same effects are almost lost on an APS-C camera because of the cropped image.

As stated in the beginning of the review, if you’re a technical geek type that likes to annoy people with a disdain for non-perfect lenses, and “improper” shooting methods, do not buy or use this lens.  This fish-eye is meant for fun, there is no right or wrong way to use it, although you may be disappointed if you simply use it to try and “get it all in” or whatever.

This is a pretty easy lens to use, and due to the “fun factor” you don’t have to worry about sharpness, distortion, and all the other stuff that has little to do with making a good picture, just make sure you focus on the intended subject, or manually focus, which I always do when using an ultra-wide lens.  If you’re outdoors, stop it down hard and you won’t have to worry much about focusing.  The only negative thing worth mentioning is the poor color fringing control, but that’s not a deal killer.  You can get rid of the axial type by stopping down, and the lateral type along the sides can be removed in some image editing software.

I tend to want to use this lens jammed up close to something, and stopped down to F/22, that’s probably 90% of my shots, other people may like the massive distortion caused by the lens.  In any case, the Sony 16mm F/2.8 fish-eye is a fun lens to use, and I encourage people to just go out and start shooting, and see what kind of crazy looking images you can generate by the end of the day.

Sony could help the sales of this lens if they re-designed it without the film filters to make it less expensive, while doing a better job at marketing the lens, I don’t think most people are aware of what the lens will do.  Cost conscience people may want to look at Sigma (or other after-market supplier) for this lens, especially if you need one for exclusive use on an APS-C camera.

APS-C users check out the review of the Vivitar 7mm F/3.5 fisheye lens, it’s built specificallly for APS-C cameras, and costs a lot less than the Sony 16mm fisheye.