The left crops show how the image looks by leaving the focus at the infinity mark as the auto-focusing system chose.  The right crops show the sharpness improvements by adjusting the focus point in front of the subject.

Below is a chart I made up (yeah, I know, poor infinity symbol) showing the sharpest focusing points at each aperture for the Sony 20mm F/2.8 lens. 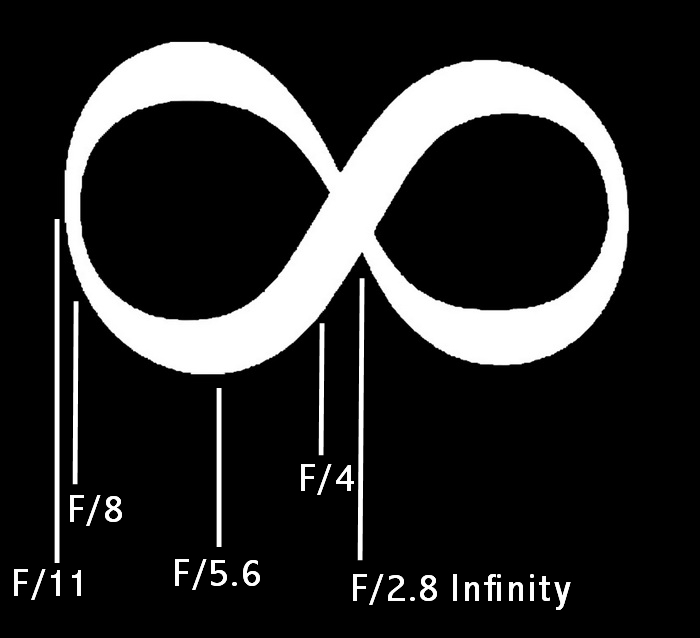 The image above represents the infinity mark on the standard Sony or Minolta lens, and the white lines indicate where the focus index mark should be relative to the infinity mark, at each aperture.  Hopefully I’ve explained that properly!

This image or chart shows where I indexed the focus point at each aperture to get the sharpest shots.  First off, the test subject was taken at infinity focus, and the auto-focus system rolled the focus all the way to the infinity mark.

Let’s start off at F/2.8.  At this aperture, leave the focus at the infinity mark, if you move it just a hair off, the whole shot will be a blurred mess.  At F/4 you should also leave the focusing at the infinity mark, but you may be able to eke out a little extra sharpness by backing it off a tiny bit.  F/5.6 shows a noticeable gain by short focusing to the middle of the first “bow” of the infinity mark.  As you near F/8, focus almost to the start of the first “bow” and you can see obvious improvements in sharpness, and at this aperture, you see the biggest gain by short focusing.  As you move down to F/11, there isn’t quite as much improvement by using this technique, (but still noticeable), and F/16 softens due to diffraction, and shows no sharpness gain.  I noticed no difference in corner sharpness.

Please keep in mind the results above are from the Sony 20mm F/2.8, some other lenses (other than the Sony 20mm) may show much less sharpness gain, or more likely, none at all.  As always, experiment with your own lenses to see if in fact they do respond to short focusing, and by how much, and at what focus point etc.

Again, please don’t use this method unless you’re willing to take the time to ensure proper results, if used recklessly, your pictures will be a blurred mess.