If you own a digital SLR, sooner or later there’ll come a time when you realize the sensor is dirty.  Most often dust shows itself as tiny dark blotches against a bright uniform background.  A major problem area can be macro shots as you stop down the aperture to gain some depth of field.  The reason it tends to show up at higher F-numbers is that the dust is not actually on the sensor itself rather, it rests against the sensor filter, which is a short distance directly in front of the sensor.  So at low F-numbers (large apertures) F/4 to F/8 or more, the light coming in naturally goes around the dust.  At small apertures, such as F/16 on up, light coming in is so restricted it casts the hard shadow and tends to get your attention.

Let’s move on now to some real examples.  Look at the dust particles in the picture below.

The dust specks visible here aren’t too awfully bad in the top shot, F/11, in the middle shot at F/32 it looks bad.  If I would have opened the aperture to less than F/8, it probably wouldn’t be noticeable, especially with the whole image filled with an interesting subject, instead of blank sky .  I used a smooth sky to accentuate the dust for these test photos.  If you are making small prints, dust isn’t a big deal, viewed at 100 percent they are quite unsightly, yet if I wanted to, I could use my photo editing software and get rid of the dust specks quickly.  When I first noticed dust on my sensor, it was 10 times worse than this!

If you want to check your camera for dust, here are a few simple steps to take.  Set the ISO to 100 or the lowest setting.  Set the aperture to at least F/22 or higher.  Turn off the anti-shake or any other image stabilizing feature.  The reason for this is so we can get a nice smooth, uniform exposure.  Make sure you have a good second or so exposure time.  Point the camera at a light colored even surface, a wall or the sky, maybe a gray card.  Move the lens around during the exposure also.  Take a few different shots just to be sure.  Be careful not to over-expose the shot as that will wipe out the dust specks.

Now let’s try to adjust our test pictures using any standard photo editing software, such as what came with your camera.  The simplest way to enhance the pictures to detect dust is to run up the contrast as far as you can.  I desaturated the pictures also.  To really maximize the visibility you can “squeeze” the histogram, but sometimes you can go overboard with this enhancement and make it look really horrible.  If you did this test correctly, and see dust specks at no increase in contrast, or worse yet, you can see dust in the cameras LCD viewing screen, then I would recommend a good cleaning.
Most owner’s manuals will probably recommend using only a blower brush or blower bulb, and, when using the bulb or brush for cleaning, not to extent the blower tip beyond the camera housing.  My new Sony a 100 manual says to use a blower brush, but not to touch the CCD with the brush.  When recommending the brush, they won’t tell you to brush off the sensor.  These recommendations by the manufacturers are to be expected, as these cleaning methods will result in the least possible chance of doing any damage to the camera.  From my experience, these methods will also produce the least possible chance of a successful cleaning.  If you’re the kind of person that doesn’t like to open things up, like your expensive camera, I’d stop at this point and call in a professional.  There’s always a chance you could fail at your attempt.  I’m not the kind of person to “hire” much of anything out, so I’m going to show you how I do my cleaning.
There are many products available for sensor cleaning; swabs, vacuums, fancy brushes and complete kits costing over $200.  I use the brush.  Before I cleaned my first sensor I read everything I could find, either over the internet or in the bookstores.  I came to the conclusion that my safest bet would be the small, cosmetic type brushes available in any drugstore.  You can buy a liquid type cleaner with a swab, but I can picture cleaning my windows in the house and afterwards looking at them with the sun shining through and seeing all the smears and smudges, but that’s just me.  I’ve used the brush method many times and have noticed no issues with scratching, smearing, or any other degradation in picture quality.

One more point to ponder.  If you’re still hesitant about doing this, remember, you will be cleaning the filter that is in front of the sensor, not the sensor itself.   I’ve been told this may be much less expensive to have replaced than the entire unit.  I think I’ve covered all the warnings pretty well, so let’s get started.

To prepare for the cleaning, make sure you fully charge the camera battery.  This will ensure the camera is able to hold the mirror up and out of the way so you can access the sensor.  Also make sure you turn off all dust producing sources, such as fans, and close all open windows in the room.  You do not want to add any more dust than you already have.  Now get out your brand new brush and a blower bulb.  Be sure not to touch the bristles with your fingers.  Caution: don’t use an acid brush from a hardware store, the bristles are too course and there are too many contaminates to deal with.  Only use a very fine bristled brush, mine are all make-up or cosmetic brushes.  You may want to go ahead and purchase a special brush made specifically for cleaning sensors.  If you think it will lower your stress level and give you more confidence, I would suggest buying one at this point.  It will also set you back close to $100 for a good one.  When I started out cleaning my sensor I didn’t have that much money to spend, hence, I chose a less expensive alternative.
When you remove the brush from the packaging, you’ll want to make sure there are no contaminates on it.  To do this, simply swipe the bristles carefully over a clean surface, like on a camera lens or filter.  Look for any smears, smudges or streaks left by the bristles.  If you see none, then you’re ready to proceed.  If you do see leftover residue, stop and attempt to clean the brush with a very light soap and water solution and let dry, then repeat the test.   I’ve never had to clean any brushes, so you may want to try another brand if you’re worried about leaving residue behind.  That’s what I would do.
Now we’ll get the camera ready.  Put the camera in the “clean sensor mode” or whatever your camera tells you to do.  This setting will lock the mirror up as I said before, allowing you plenty of time for the task.  Warning; do not simply set the shutter speed for a long exposure or set to bulb mode, disaster will surely follow.  Look at the picture below.  The sensor is the greenish looking rectangle, not to be confused with the mirror, which is up and out of the way in the picture below.  Remove the lens or body cap.  Next, prepare your brush by blowing air across the bristles using the blower bulb.  The scene should appear similar to the one below. 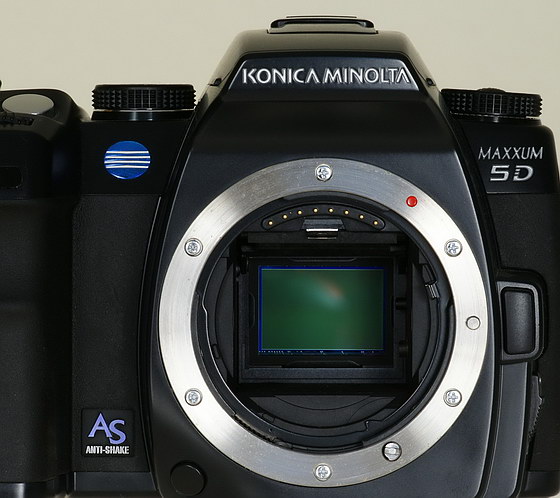 Ever so carefully, stroke the sensor with the bristles while applying very little pressure.  Move in one direction only and make only one pass per area.  My brush was not as big as the sensor so I made two passes, and went in the same direction each time.  The first pass was at the top, from left to right, then followed up by a second pass at the bottom, left to right.  The brush bristles should just be touching the sensor area.  Now, reattach the lens or body cap, turn off the power and perform the initial photographic test again, using the same procedure.  If you have a little too much dust left over for your taste after re-checking, perform the cleaning again.  I’ve never had to do this more than two times.
That second to the bottom shot looks pretty clean to me, so I think I’m done with this session.  There’re a few really tiny spots that show here, but you’ll never see those in any of your real-world photos.  I did the cleaning again and got rid of those two spots in the upper left corner, but you could just leave that little bit and forget it. The bottom shot at F/11 shows the final result.  Look at the test shot below of the brand-new, just hours old Sony a100  for comparison.
My total time for cleaning, including gathering the brush, fresh battery and blower bulb was less than five minutes. It took more time to take the series of test shots than it did for the whole cleaning!
As I said earlier, the procedure described here works well for me, your experience may vary.  Read some articles on sensor cleaning on other websites or ask someone for advice down at your local camera shop before making your final decision. I’m not an authority in the camera world, so if you have some useful information, opinions or comments, please feel free to email me.  Thanks for visiting.