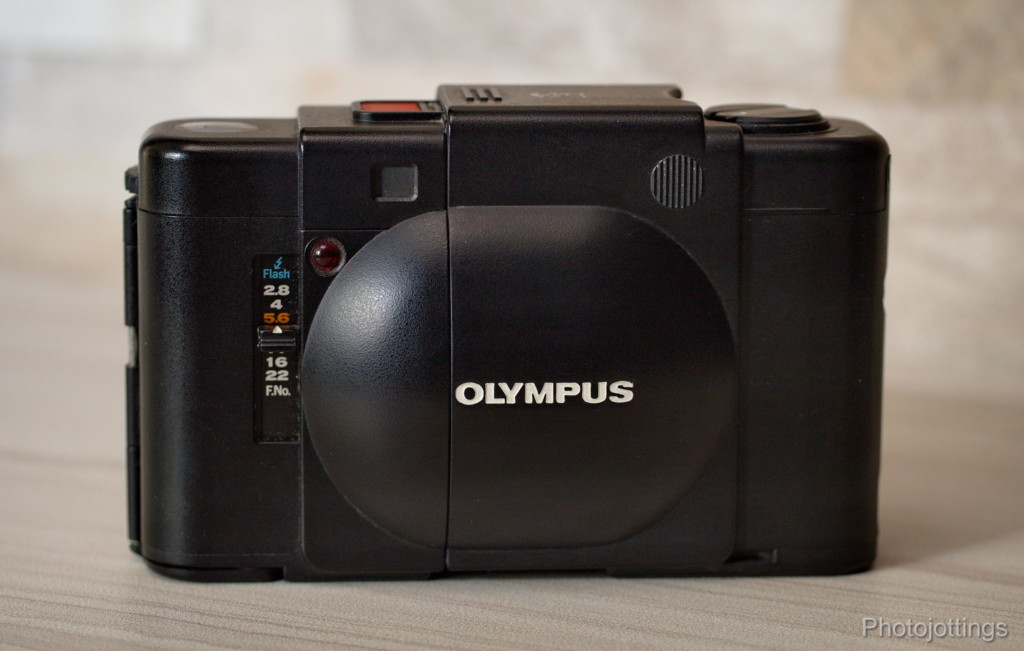 The shirt pocketable Olympus XA rangefinder is a popular favorite among the ‘cool little film camera’ crowd.  I was looking to purchase a small pocketable camera too; and I read the hype, then bought one.  I should have looked at all the pictures on Flickr and the likes, that would’ve saved me a lot of time and money.

It’s not that I don’t like the Olympus XA, it really does have a lot going for it, like coincidence coupled rangefinder focusing, excellent exposure metering, manual aperture control, illegal long exposure mode, user selectable ASA settings, exposure compensation, and a self timer.

The Olympus XA is feature rich for being so small, but it has one big flaw, so read below to find out what it is!  Be sure and scroll down to the full size test pictures to see if this camera will meet your printing or projection requirements.

Price; original list price $233 according to a 1981 photo magazine.  Street prices were less, as well as mail order places like B&H Photo.  Update: several ads in a 1985 Popular Photography magazine listed the XA between $79.95 and $89.95.  Current eBay prices range anywhere from $50 to $300 depending on condition and if it comes with the original box or is refurbished etc.

Build material; appears to be a mixture of metal and plastic, with a quality fit and finish.

Box contents; not sure, at least an instruction manual in multiple languages, and strap.

Viewfinder; bright and clear, with a rather dim rangefinder patch.  Shutter speeds show up along the left side using a moving needle, with an over exposure zone at the top.  Minimum indicated shutter speed is 1 second.  Viewfinder needle indicator is separate from the actual camera metering, so you may not be getting the shutter speed that’s indicated in the viewfinder.

Shutter and speed; between the lens 4 blade aperture; electromagnetic ‘feather touch’ shutter, 10 second to 1/500 sec.  Has a ‘back light’ exposure compensation switch for +1.5 EV.

Accessories for this model; several different electronic flash units that attach to the left side of the camera.

Crippling features and omissions; batteries dead, or no batteries: sorry, the camera won’t work; plus my normal complaints, no filter threads or hood.

Good features; very small and shirt-pocketable.  Excellent exposure metering, even for slide film.  Two ways to adjust exposure, either the +1.5 lever, or use the ASA settings.  Don’t forget the dangerous long exposure mode. 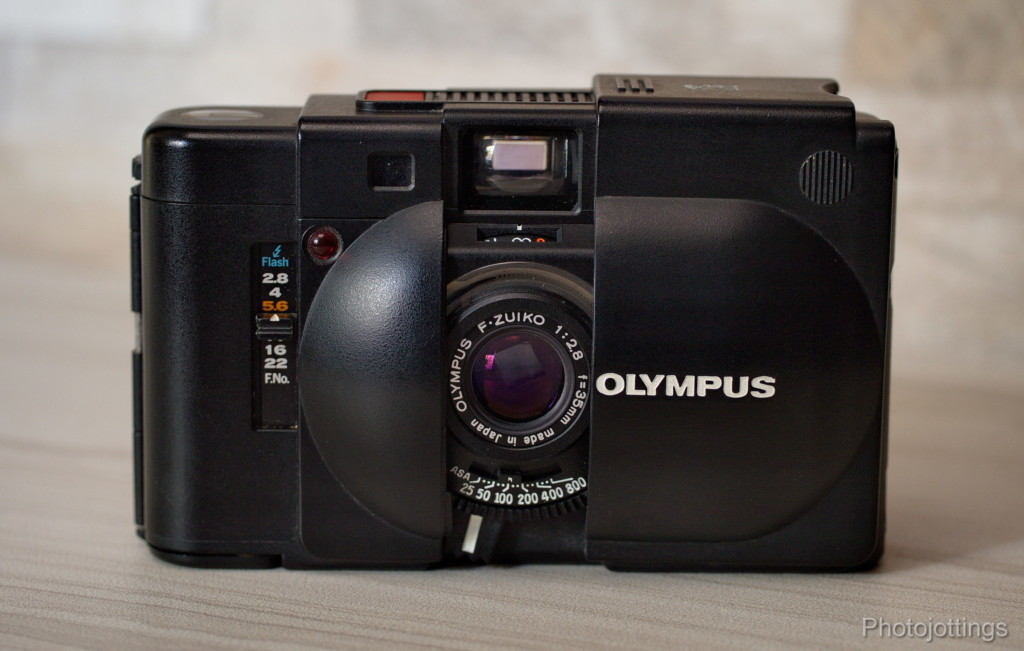 Clamshell lens cover slides to the side, which turns on the power and you’re ready to shoot. Aperture selection is on picture left, and ASA (IS0) switch is at the bottom of the lens.  Red dot in upper left is self timer indicator, (intermittent) and battery check, (continuously lit). 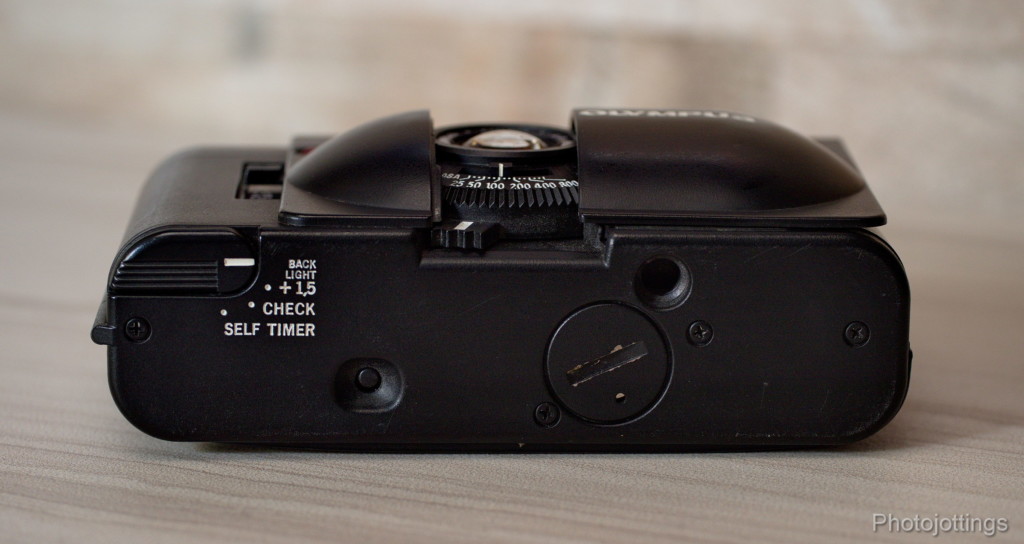 Bottom reveals an off-center tripod socket, film rewind button, and the focus lever visible at top cut-out.  On the left is a lever switch for engaging the back light +1.5 exposure compensation, battery check, and the 12 second self timer.  The big round coin slot cap is where the batteries go in. 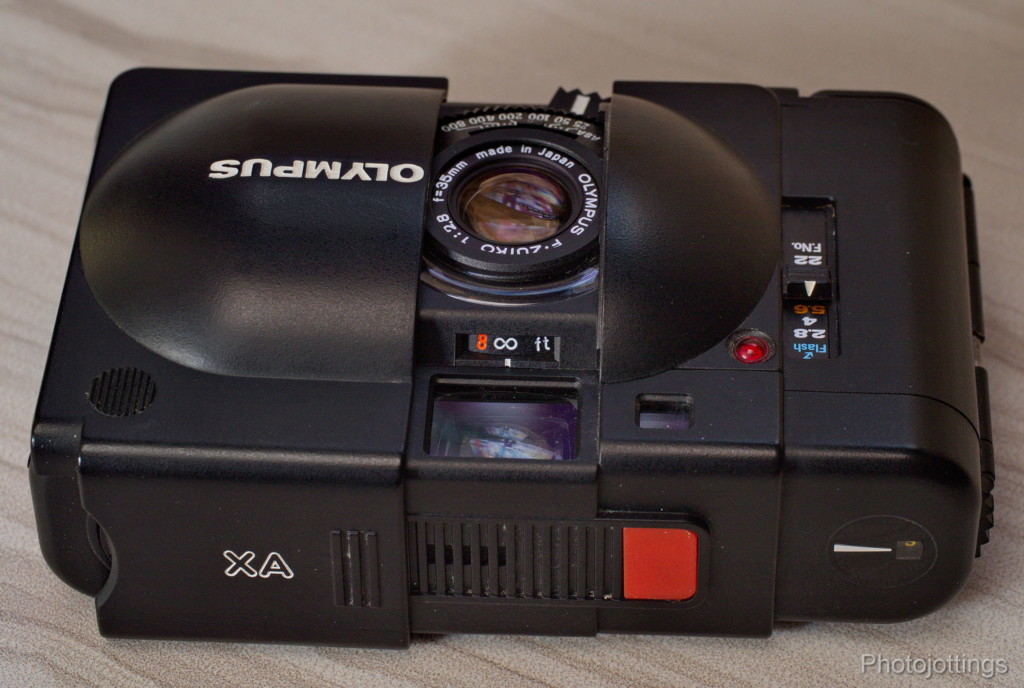 On top is the very sensitive, ‘feather touch’ red shutter button, with the frame count indicator to the right of that. Visible in the shot is the focus scale just above the viewfinder.  The small window beside the viewfinder is the rangefinder window.

Lifting the rewind knob up opens the back cover. Inside we see the large glass element at the back of the lens, and the film take up spool.  Film winding is done by turning the thumb wheel above the take up spool, similar to a disposable camera.

Size comparison between to small cameras. Unfortunately, when you add the flash to the Olympus, it makes it bigger than the Nikon.  The Nikon is a much more refined camera, with a lens that’s light years ahead of the Olympus’. 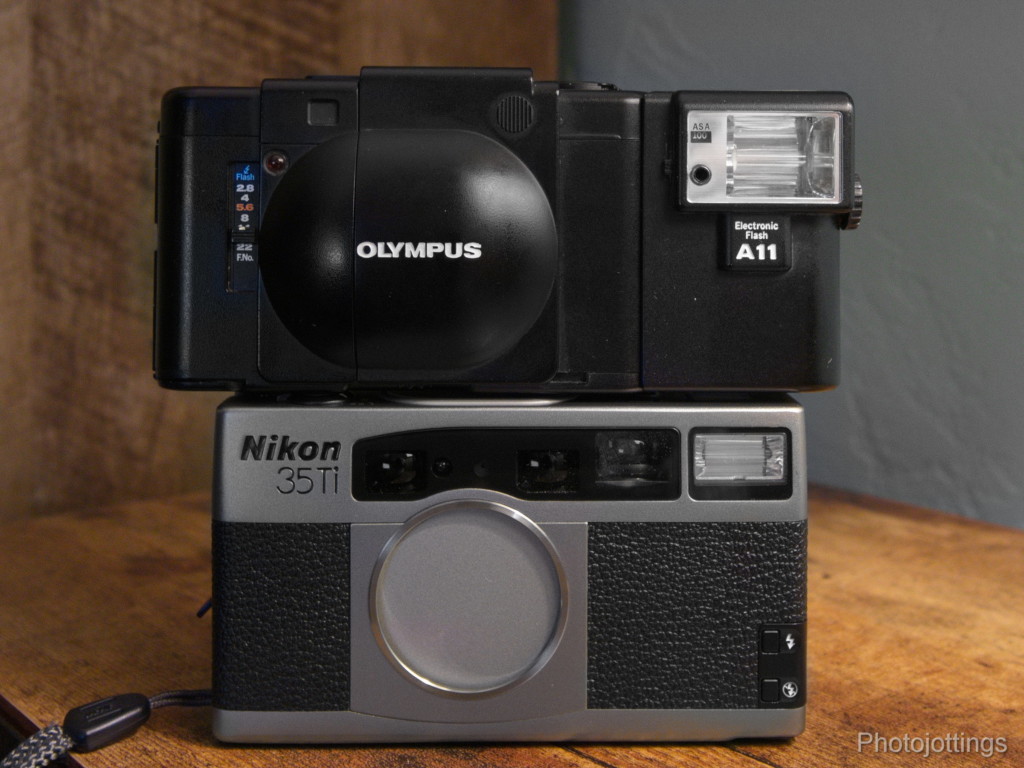 See what I mean…. 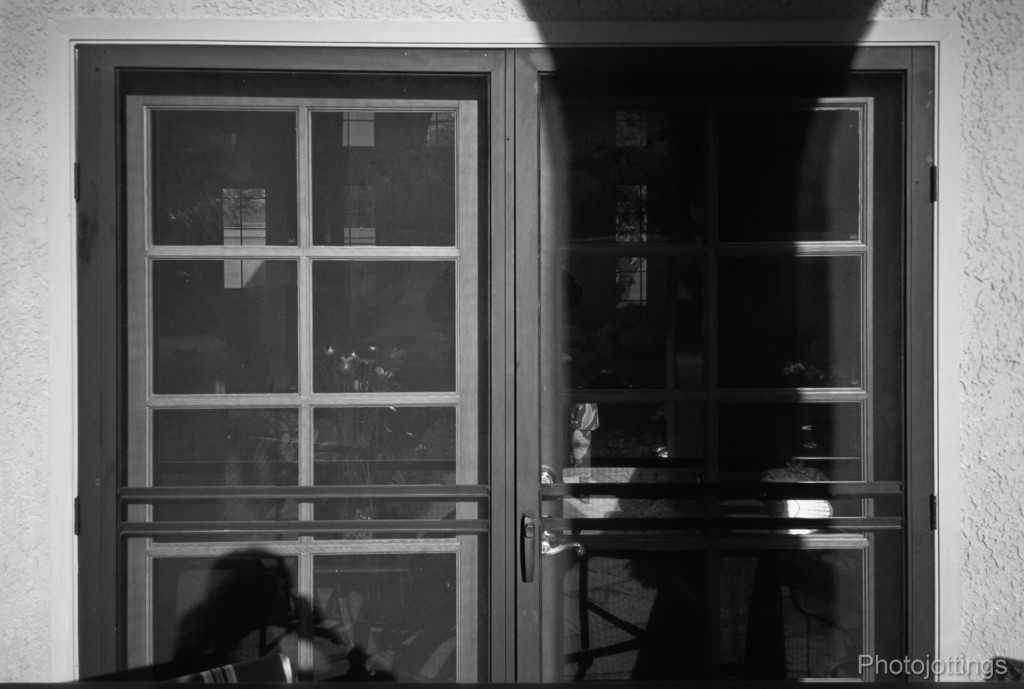 I see pincushion distortion along the door frame in this awful test shot.  If this small amount of distortion bothers you, don’t worry, it can be removed rather easily with simple photo editing distortion sliders. 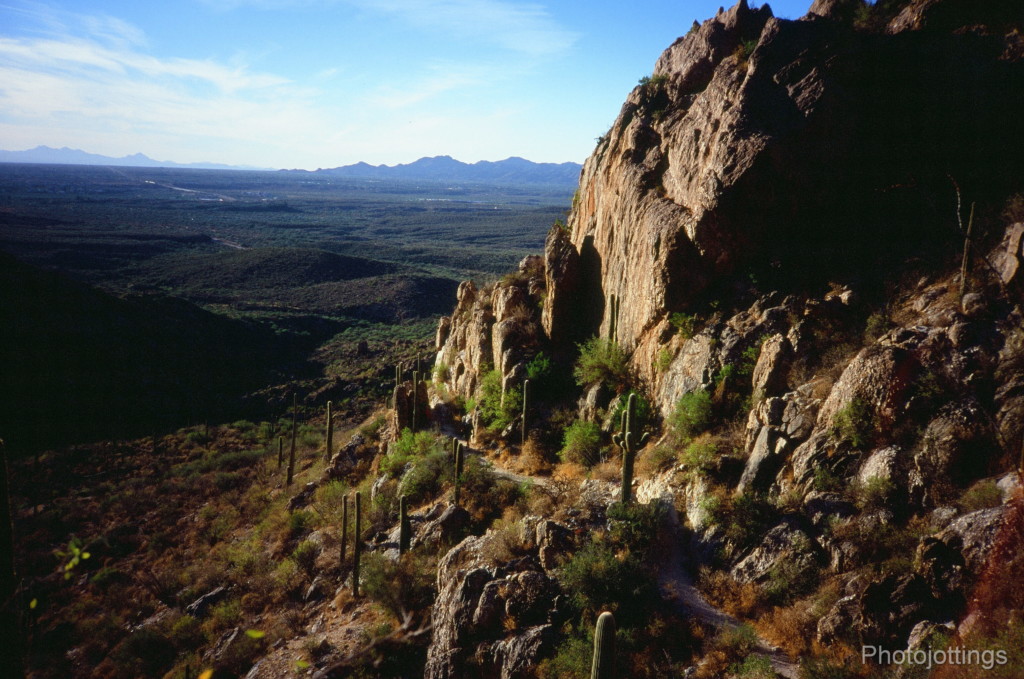 Fuji Velvia 100.  I see a red arc in the lower right corner from the sun hitting the lens. 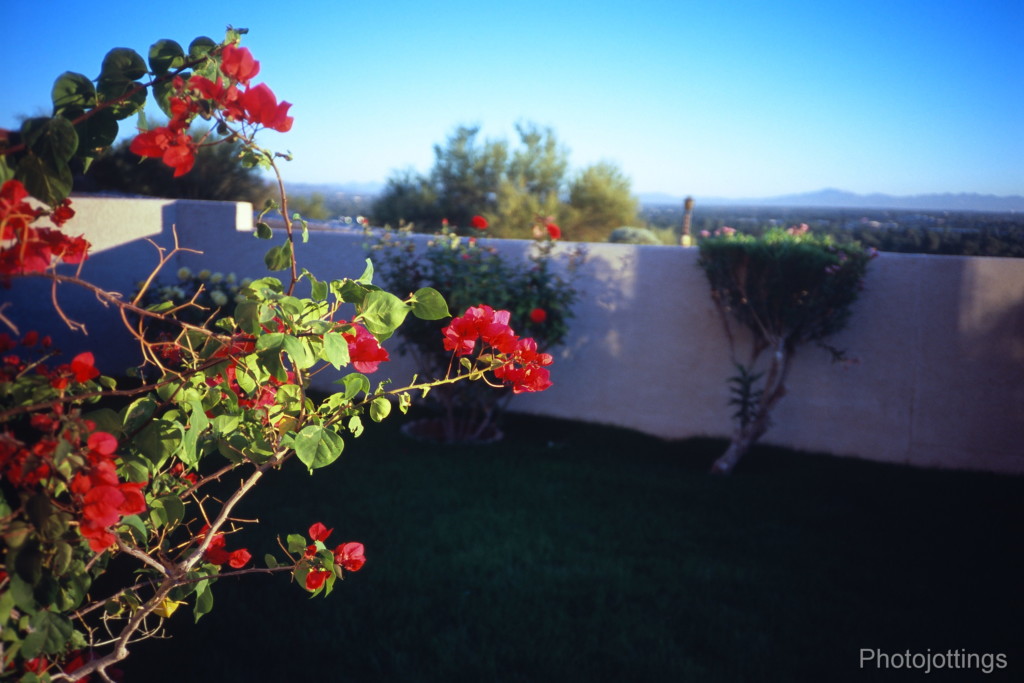 Background blur with the lens set to F/2.8 and focused close to the subject. 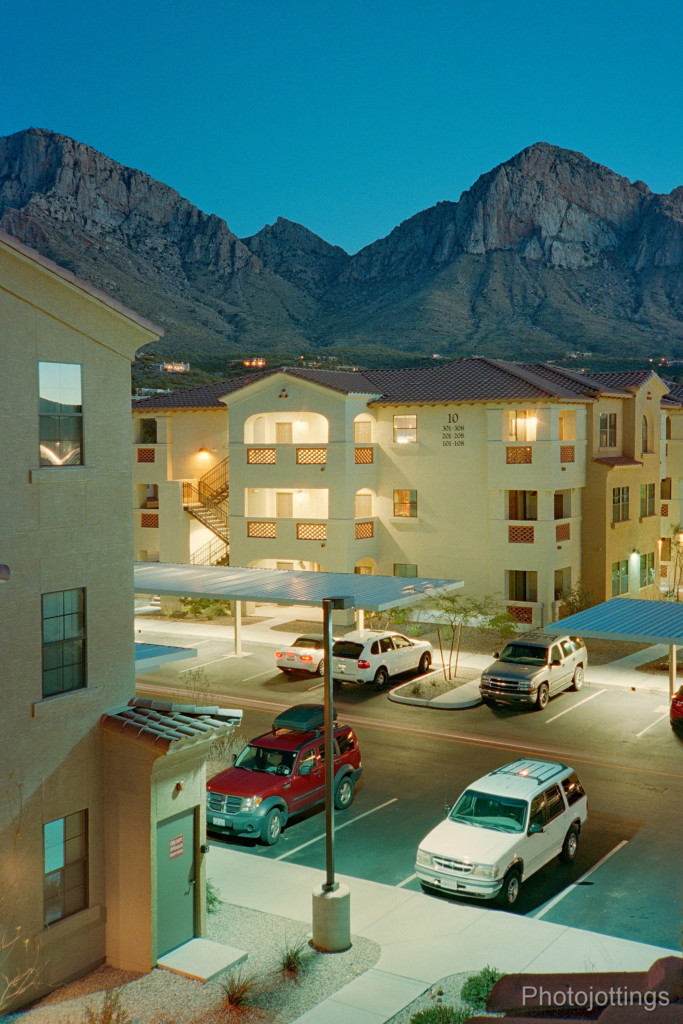 Night shot using the illegal long exposure mode. To do this, set the lever to battery check, put the camera on a tripod, get your composition, and press the shutter button.  An annoying buzzer will go off the whole time the shutter is open.  When you’re done with your exposure, put a black cloth over the lens, and flip the lever back to its original position, and the shutter will close.  I don’t know why Olympus doesn’t mention this trick in the manual, but the manual does mention you should not push the shutter button during a battery check as “it will run the batteries down, leaving the shutter opened,” well that’s kind of the idea for long exposures right?  If the batteries just happen to die during an exposure, simply close the cover, and maybe cover the camera with a black cloth to be safe, and insert new batteries! 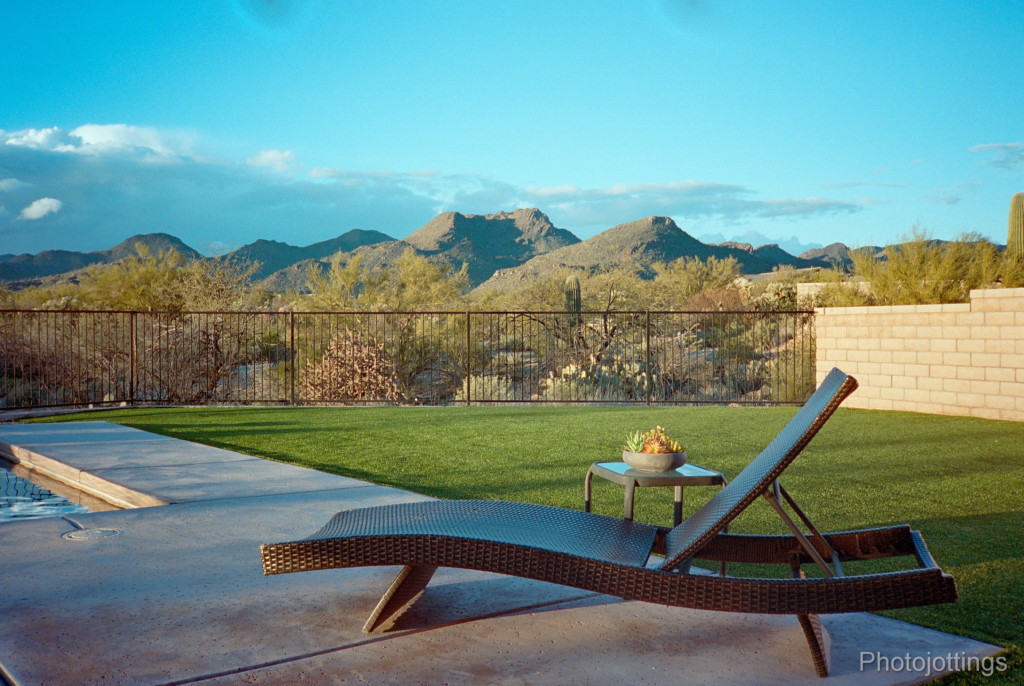 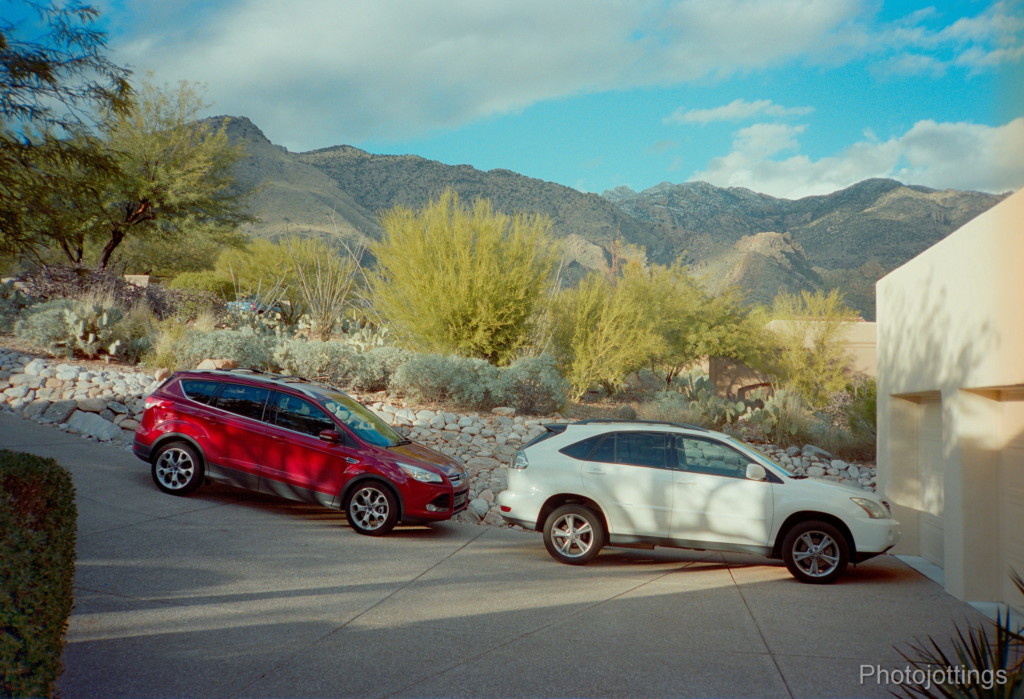 Cars in driveway, around F/8.  I see a colored band along the extreme right side, probably from the scanner.  Kodak Gold 200.

All test shots are displayed at 3000 x 2000 pixels wide when enlarged, and that’s all the resolution included in the film.  Scanned on a Nikon Coolscan 9000 ED. 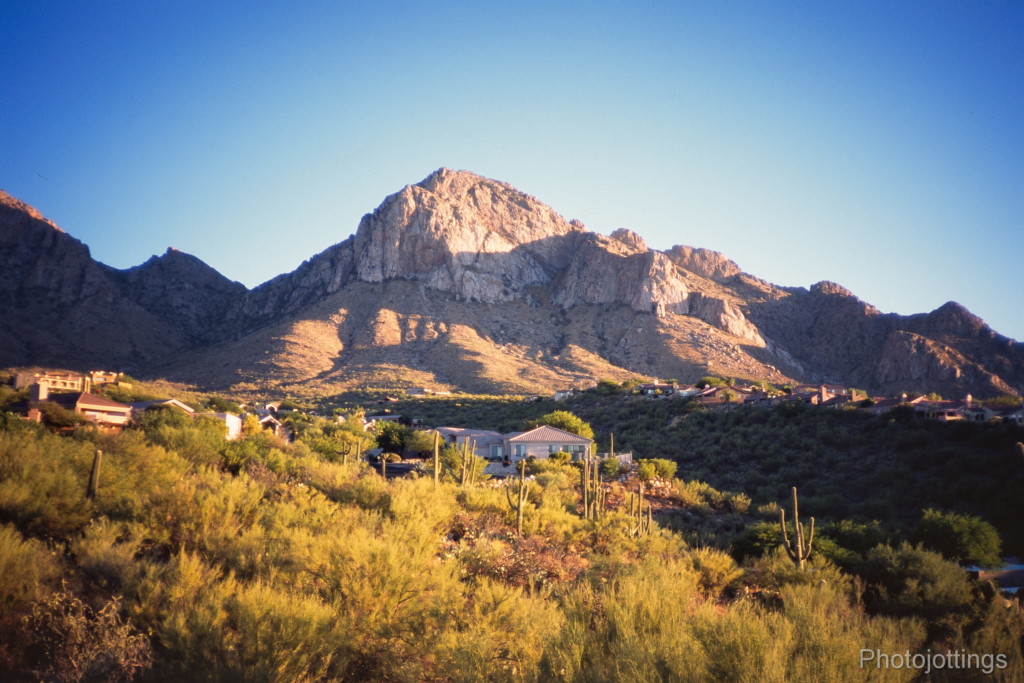 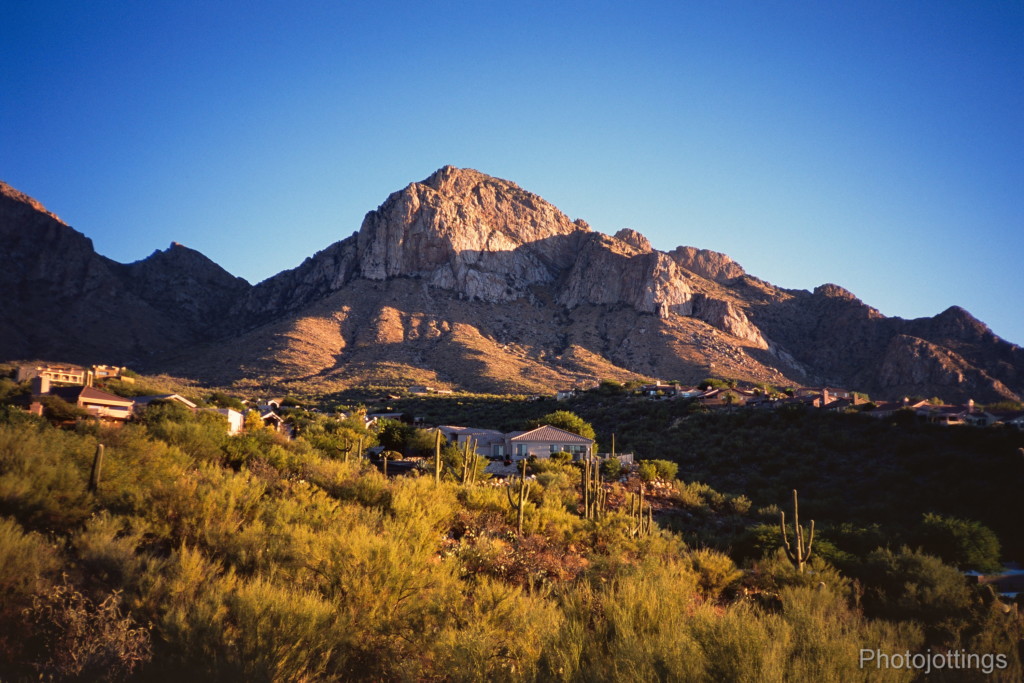 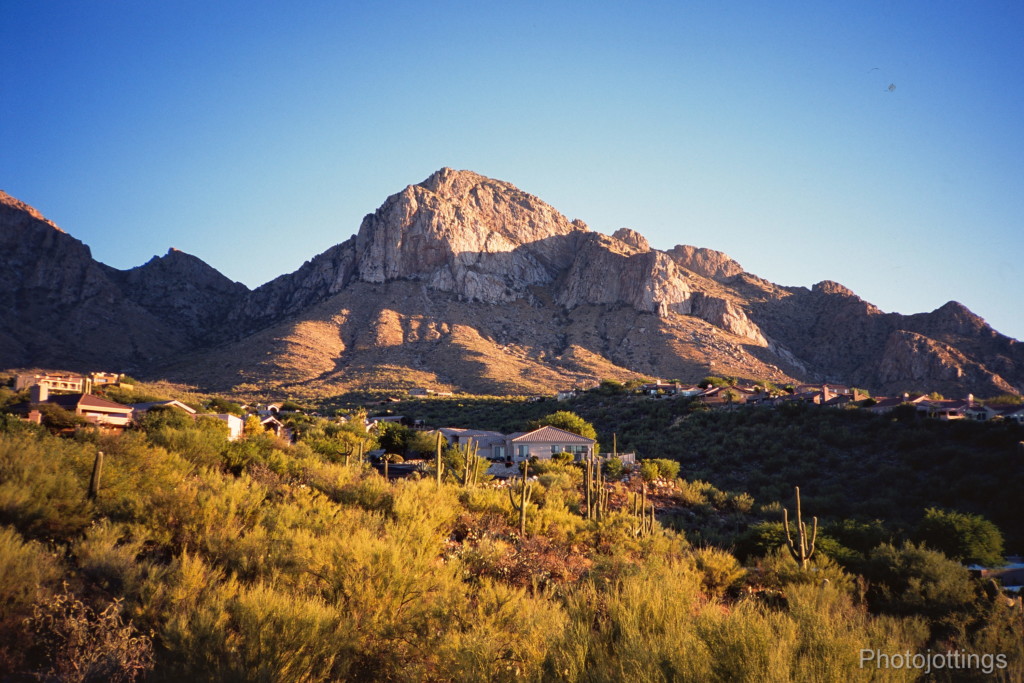 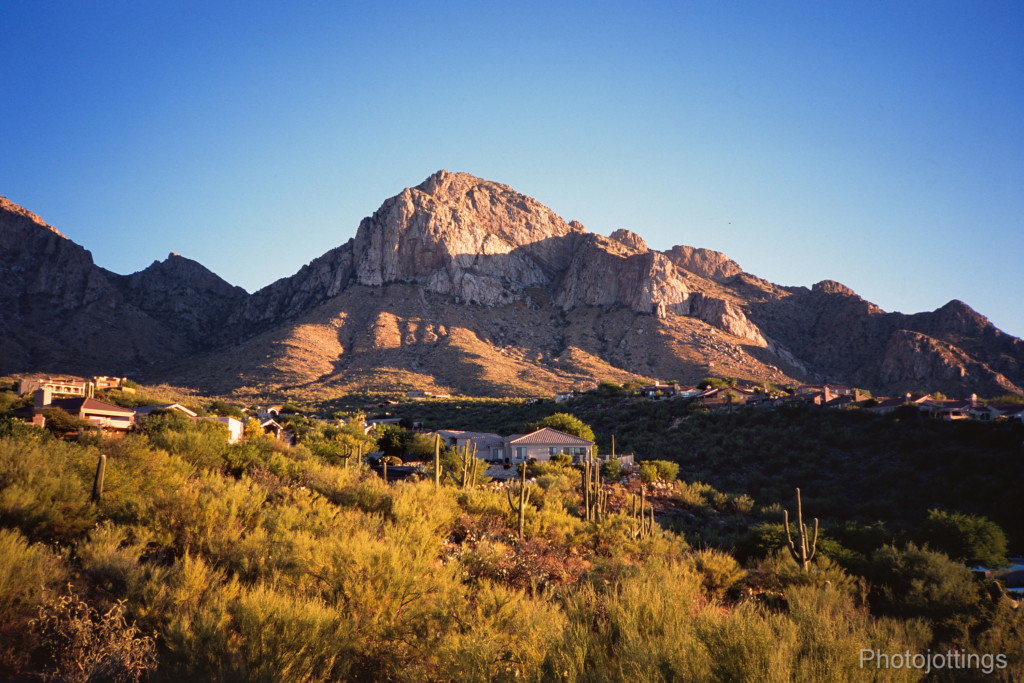 F/8.  The sides are decent, but the centers start to suffer as a result of diffraction. This is the best aperture for landscape scenes.  F/11, (not shown) is about the same as F/8.  Fuji Velvia 100

.  (I’ve softened my view about the quality of the camera after a year or so of contemplation.  At the time, I was also testing the Olympus 35 SP, and the Nikon 35Ti, and of course both of those cameras are top notch, and much more expensive, so the unintentional direct comparison was a bit harsh).  Apparently, Olympus was mostly focused on a super small camera that you could keep in your pocket, and had to sacrifice a good traditional lens design as a result.  Although the lens is a 6 element in 5 group design, it’s overall resolution and contrast is , actually pretty decent at wide apertures for this price range, and quite good as you stop down the aperture. With that said, all is not lost.  Film is for the traditional artist; you do have an ‘original’ of your work to hold in your hand and show off.  So the little XA gets some points there.

I’d gladly sacrifice a little space in my pocket or waist pack for the vastly superior Nikon 35Ti, or Olympus 35 SP.  I figure if I’m going to carry a 35mm camera, it better be a good one; because today’s high end cell phone cameras will produce better quality images than the XA.  I’d choose a film camera that makes high quality and sharp images that I can display in the future and be proud of.    The Olympus XA will make some nice 8×10″ prints, and that’s about the largest size most people will print, do you agree?

There are other versions of this little camera.  The XA1 was a cheap fixed focus model with a different 4 element 35mm lens.  The XA2 uses zone focusing and a 4 element 35mm F/3.5 lens.  The XA3 was mostly the same as the XA2 but with DX coding and the 1.5ev back light button from the original XA.  The XA4 has a five element 28mm F/3.5 lens that focuses down to one foot or .3m.