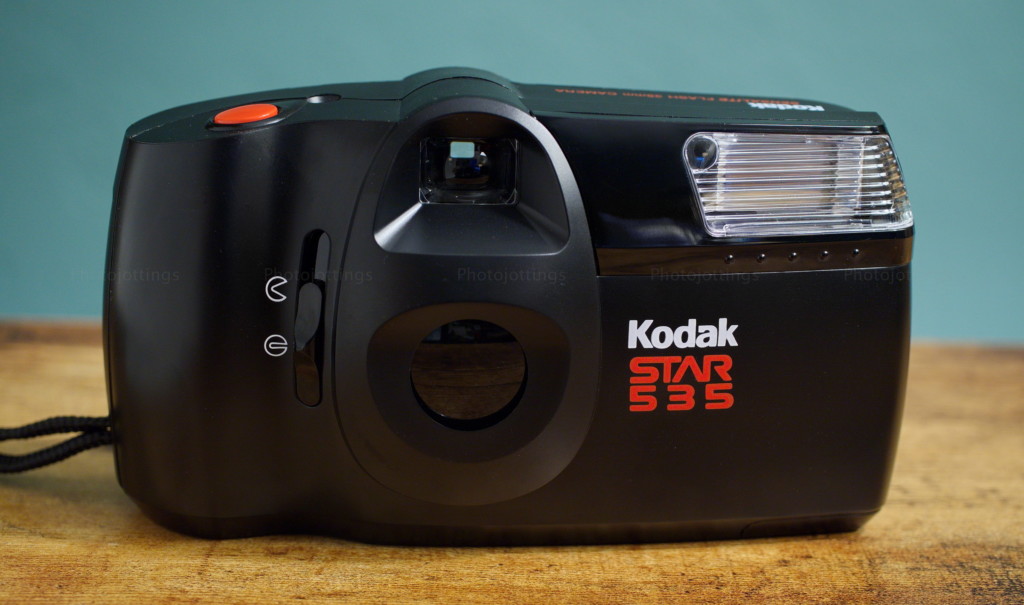 Ever wonder what it’s like to take pictures with a really awful 35mm camera from the early 1990s?  Well wonder no more, and even better, I’ll save you the $5 you would’ve spent finding out!

The Kodak Star 535 was a budget friendly camera, one that you would normally find at K-Mart or Walmart.  Most of the time it came in a blister pack with a roll of film and some batteries.  Unbelievably, the retail price for this thing was $75 back in 1992!  That seems way too high for the image quality of this camera, however it did have some nice automatic features.

If you’re bored at work, and looking to blow five minutes, scroll on down for the review.

Below is the original press release from Kodak in 1992.

The Star 535 camera allows users to take sharp photos in daylight or with flash using film speeds of 100, 200 and 400. It features a built-in flash and a battery warning light that blinks when battery power is low.  A red signal alerts picture-takers in low-light conditions that the flash is needed.  If the flash is needed, it automatically fires when the shutter button is pressed, then recharges in five seconds.

The Star 535 camera outfit contains a 24-exposure roll of Kodak Gold Plus 200 film, two AA-size alkaline batteries, and a booklet of coupon vouchers for future Kodak purchases. It will have a manufacturer’s suggested retail price of $74.95 and is backed by a one-year warranty.

With the introduction out of the way, let’s check out the Kodak Star 535 specs.

Price; Kodak press release says the retail price was $74.95; but street price was probably less, maybe $69.95.  Adjusted for inflation, today’s price would be around $130—way too much for this awful camera.  Current eBay prices range anywhere from $5 to $15. I bought this review camera for $11 brand new in the blister pack.

Build material; appears to be mostly plastic, with a build quality similar to a disposable camera.

Focusing distance; 4′ (1.2m) to infinity, probably focused at about 15′ (5m) based on the sharpness distance from the images below.

Viewfinder; big and bright but no frame lines; about the same as a disposable camera.

Approximate resolution; will make good 4×6″ prints or about 2000 pixel wide one a computer screen.  See sample images farther down the page.

Accessories for this model;  none. 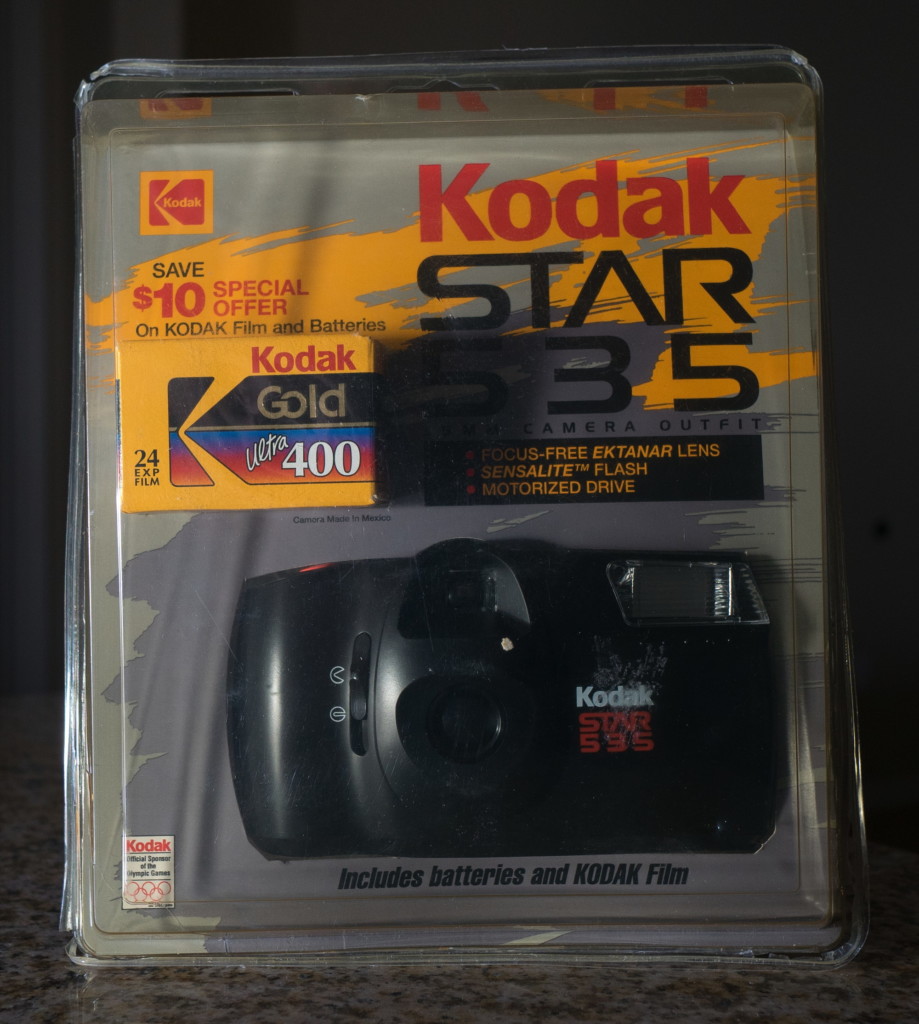 The blister pack with everything you need to get started taking pictures; camera with wrist strap, batteries and a roll of film.  In 1992 the Olympics were being held in Barcelona Spain, and Kodak wants you to know they are ‘Official’ sponsors.

The camera front features a sliding lens cover, auto flash, and a viewfinder that’s actually pretty bright and easy to see through.

The only thing on the back is the film door, and inside you load the film just the way the directions say. When you close the back, the camera automatically winds the film to the first shot if you put the film in correctly.  The film gate is curved with no pressure plate, which is a huge red flag if you’re looking for sharp pictures. 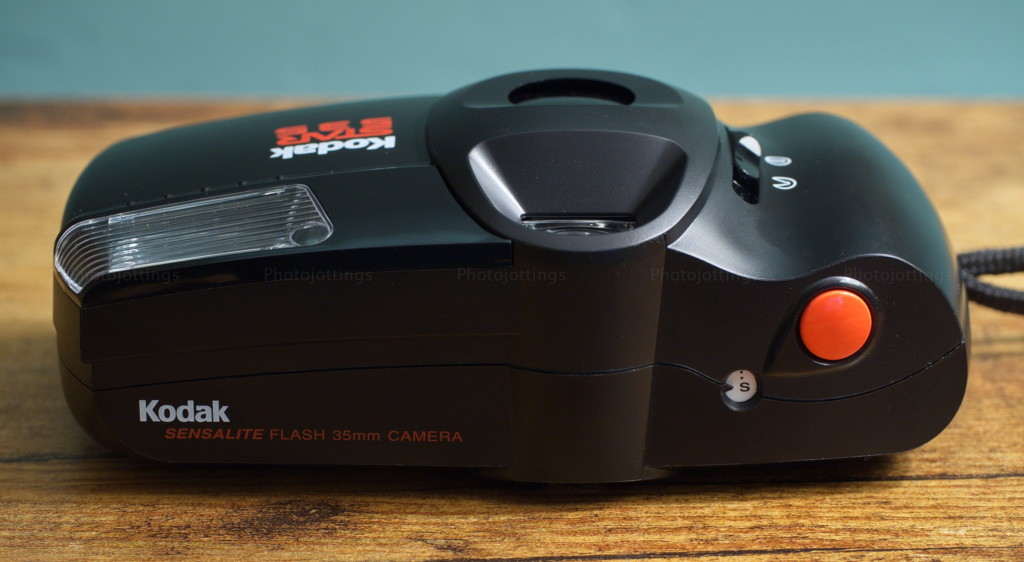 The little round counter shows the number of shots, but only even numbers, dots fill in the odd numbers.  The big red button is the shutter trip. 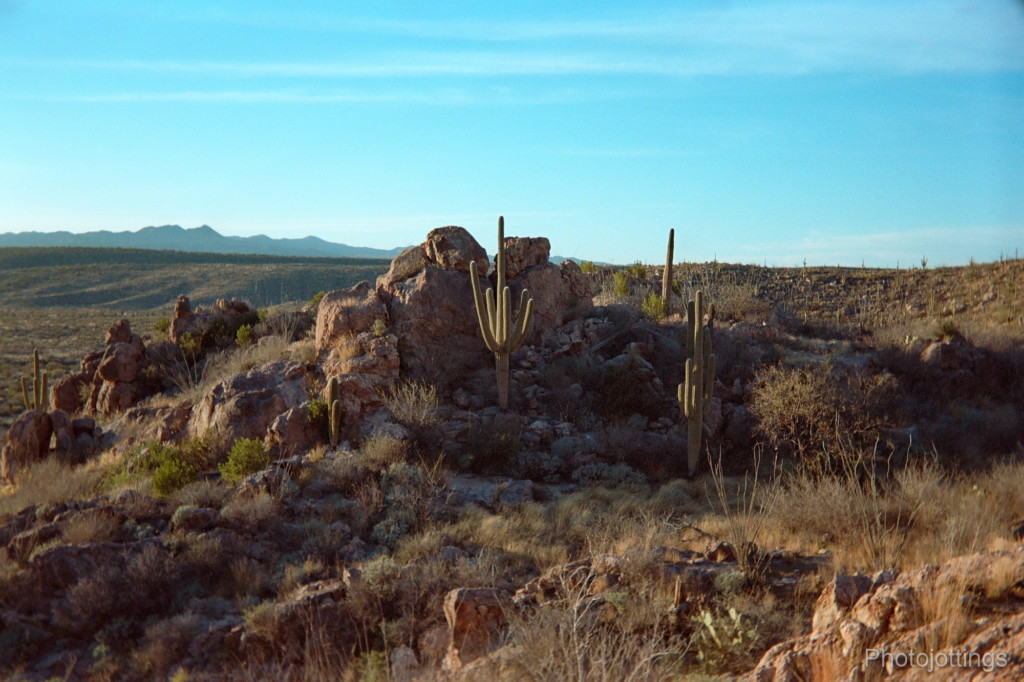 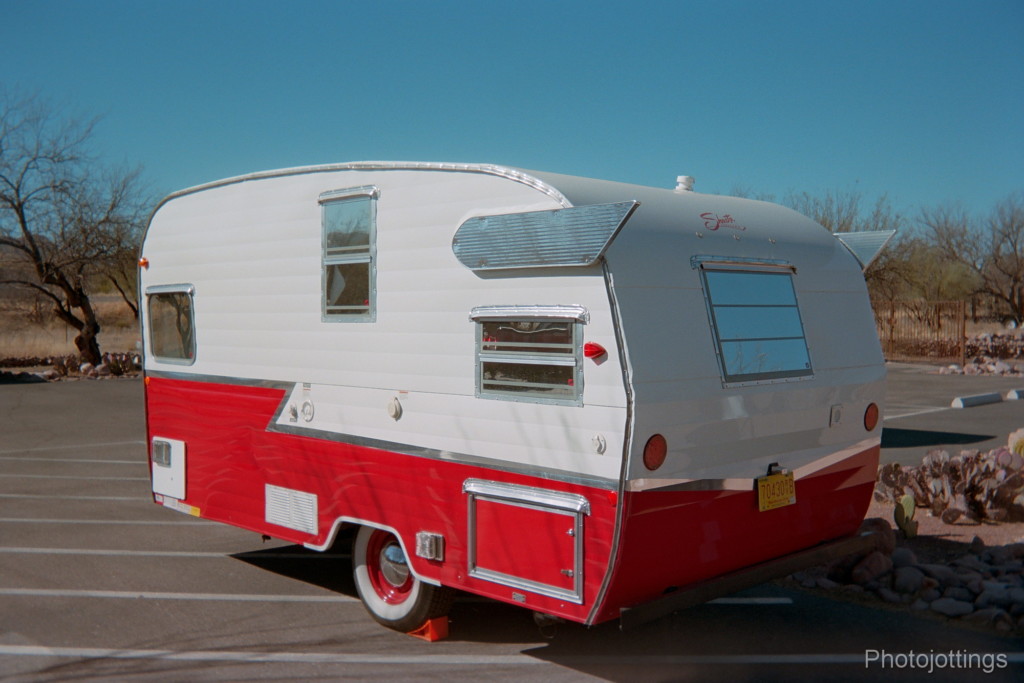 Shasta 15′ Airflyte AKA ‘the flying toaster.’  This shot looks decent with a central subject. 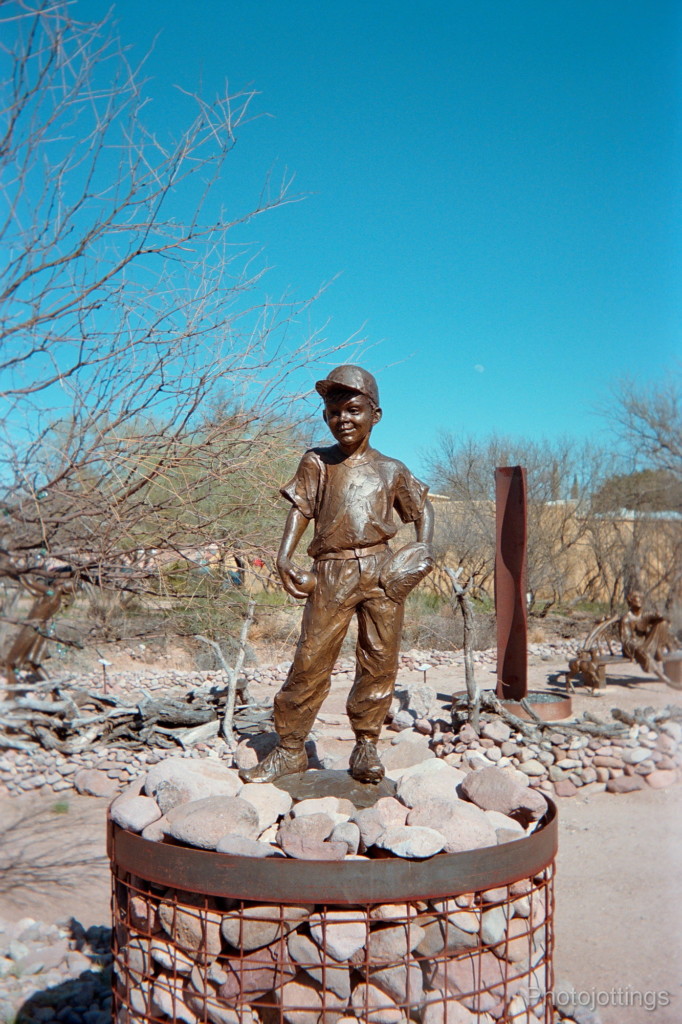 Little leaguer.  The central area is pretty sharp, and this is were the camera does a decent job. 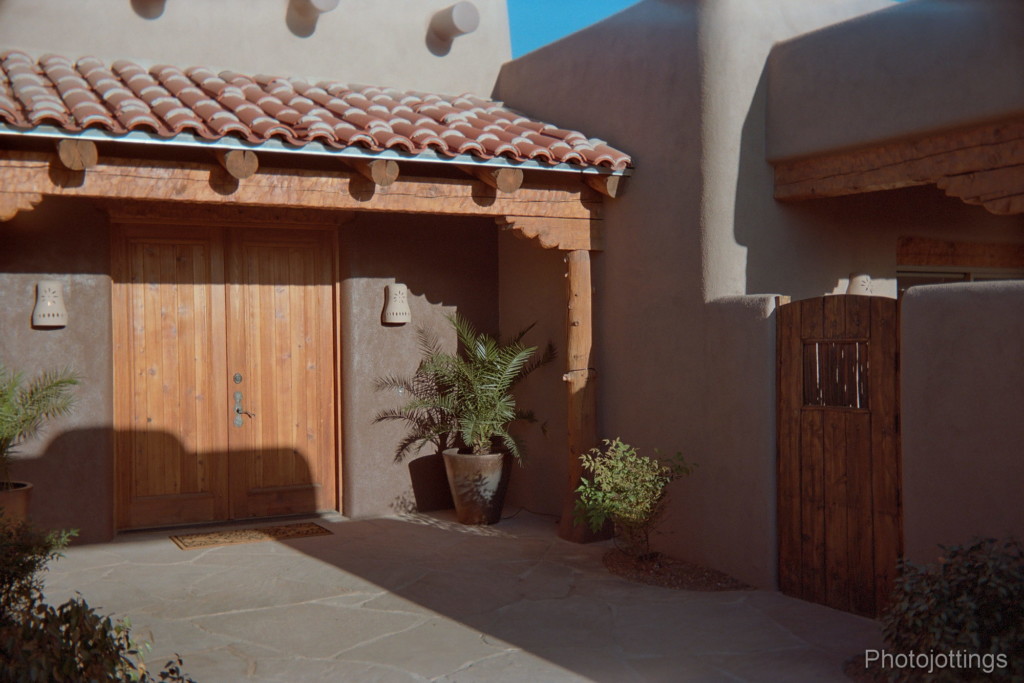 Soft sides here, along with a light leak along the top right edge. 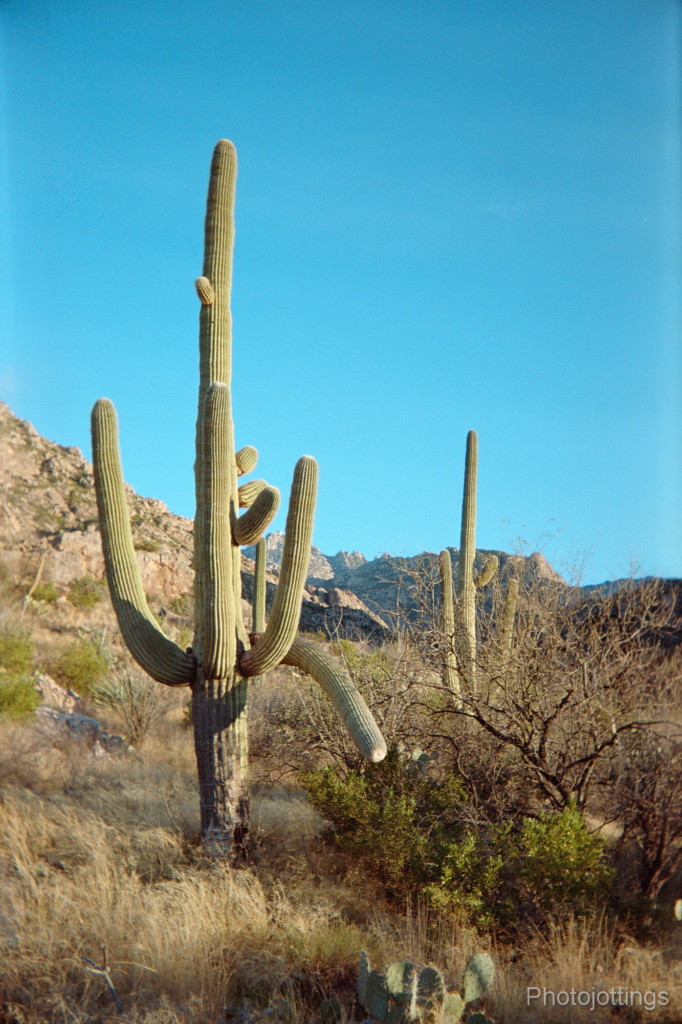 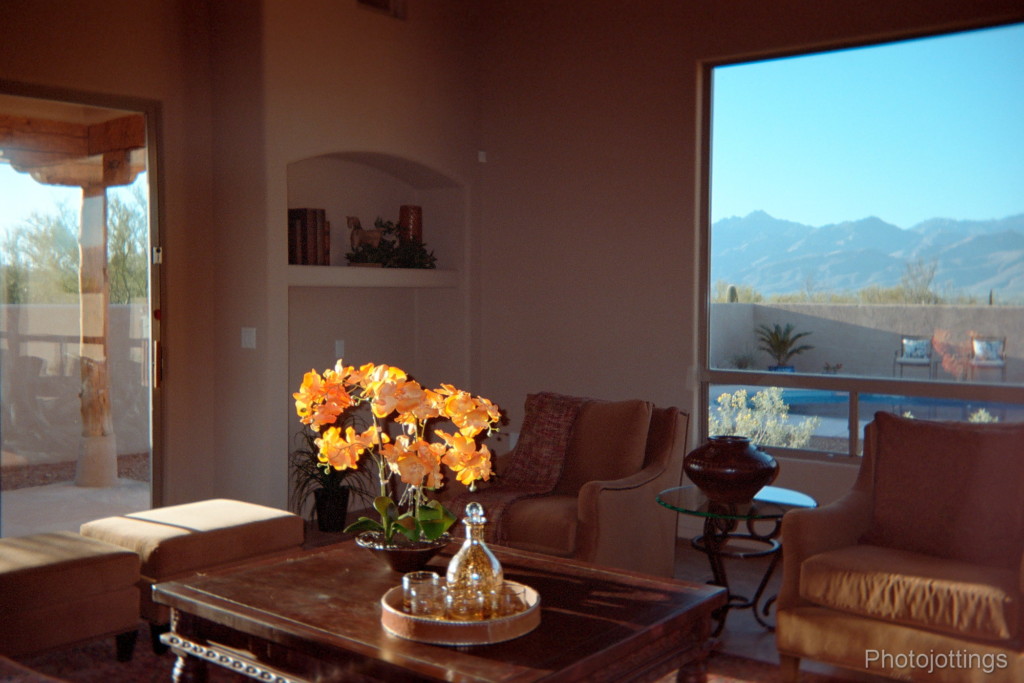 Flash interior shot.  It’s not very powerful or useful in larger rooms like this.  The flowers are about 8′ (2.7m) away, and are a little blurry, but the objects behind the flowers are much sharper.  Keep your subjects about 15′ (4.5m) away from the camera if you can for the sharpest shots.

I ran one roll of film through the camera and decided to throw in the towel, the image quality is just not up to my minimum standards.  With that said, if you compose your subjects in the middle of the frame between 10-15′ like the ball player above, you can actually get some good results.

Ultimately, the lens quality is the limiting factor here, and there are better bargains out there for the same amount of money, like a single use camera reviewed here and here.  I can’t believe Kodak was asking $75 for this thing.  I purchased better cameras back in the early nineties for half this price.

I used the Nikon Super Coolscan 9000 ED at 2000dpi for all images here; that gets all the info out of them, and with cropping and leveling, you’ll wind up with approximately 2000×1334 reasonably sharp images, which is plenty for 4×6″ prints.

Anyhow, I’m a sucker for these little cameras that are still new in the package, that’s why I bought it. I had fun shooting it, but one roll is enough, I’m moving on…..