Today we head back to late 1950s for a review of the Crapsey designed Kodak Pony II.  This rather mundane camera has a simple one speed shutter, zone focusing, multiple apertures to choose from, a good Kodak Anastar four element lens, (supposedly loaded with radioactive thorium dioxide), and uses commonly available 135 type film, so it should be an easy camera to get good pictures from, even in poor shape.

The little black plastic Pony II was produced from 1957-1962 and was one of the simplest and least expensive ‘Pony’ cameras in the series.  A couple of odd features on this version include a tripod socket, even though it has a single speed shutter and no bulb or long exposure modes; and of course the camera uses the dreaded ‘Exposure Value’ system, (popular back then), in which you set the aperture using information from an exposure card on the back of the camera that matches your film type.  It was a confusing way to figure out the proper exposure, but it did work if you followed the instructions.  A step up from the ‘II’ version is the ‘IV,’ which features a four speed shutter with bulb mode, traditional F/stop markings, and an accessory shoe.

The Kodak Pony II cameras are plentiful and relatively inexpensive on ebay, and also at garage sales and flea markets.  The review model here is in excellent condition and working order, so let’s take some snaps and see what happens!

Other versions;  a version IV had a four speed shutter with bulb mode, traditional F/stop markings, and an accessory shoe.  Earlier version called the ‘Pony 135 C’ had the same basic lens with a four speed shutter.  Pony models 135 and 135 B used a tube mounted lens that slid inside the camera when not in use.

Shutter and speed; single speed push-lever type shutter; mine averages 1/30s, I’m not sure if that was the factory speed or not.  Has a four bladed, diamond shaped aperture.  No cable release option.

Distortion; did not check, but looks mild from the pictures I have with straight lines near the edges.

Double exposure prevention; yes, but can be over-ridden using the reset lever on the back.

Flash.  none, but camera supports ‘M’ sync for use with flash bulbs only.

DX coding; none, use the aperture to adjust exposure.

Accessories for this model;  Field case No. 15FC, original MSRP around $9.95.  Kodak Filter Kit No. 1041, which includes several filters and a series 5, 1-1/8″ adapter ring.  Series 5 Portra lenses will apparently work with the adapter ring.   Many flashes are available, including the Kodalite Super M-40, Rotary type 1, and some others.

Crippling features and omissions; shutter speed to slow for me, half my shots show minor camera movement.  No bulb mode, or any other way for long exposures.

Good features; very simple to operate, and all manual controls. 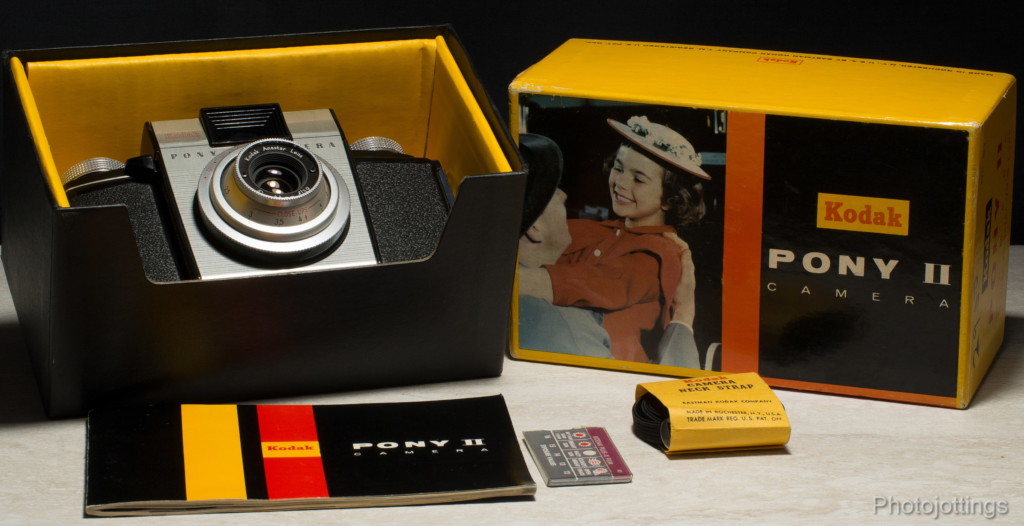 The box contents; camera, owner’s manual, exposure cards for the back of the camera, and a neck strap.  This is box outfit No. 51. 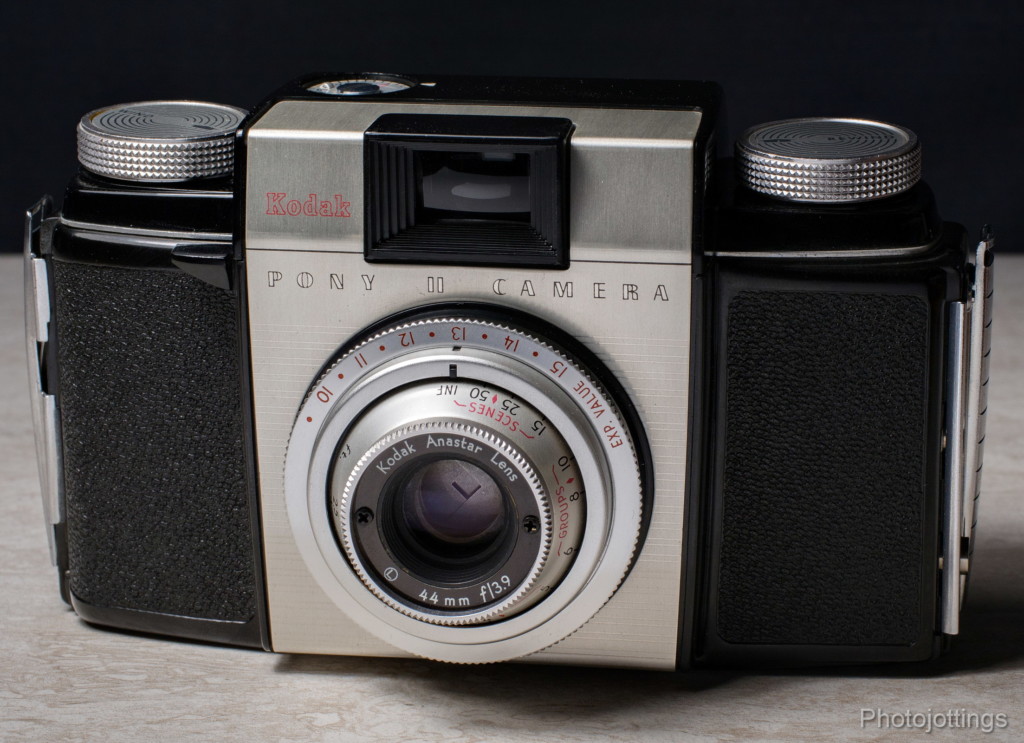 The front shows the Kodak Anastar four element lumenized lens, along with the confusing Exposure Value system that was widely used during this time.  The focusing ring shows three different ‘zones’ to help you achieve sharp shots.  First is Close-up for subjects between 3-5,’ Groups between 6-10,’ and Scenes, 15′ to infinity.  The shutter lever is on the left in the picture; you push it down until it fires.  It isn’t very smooth, and causes a lot of blurry pictures for me. 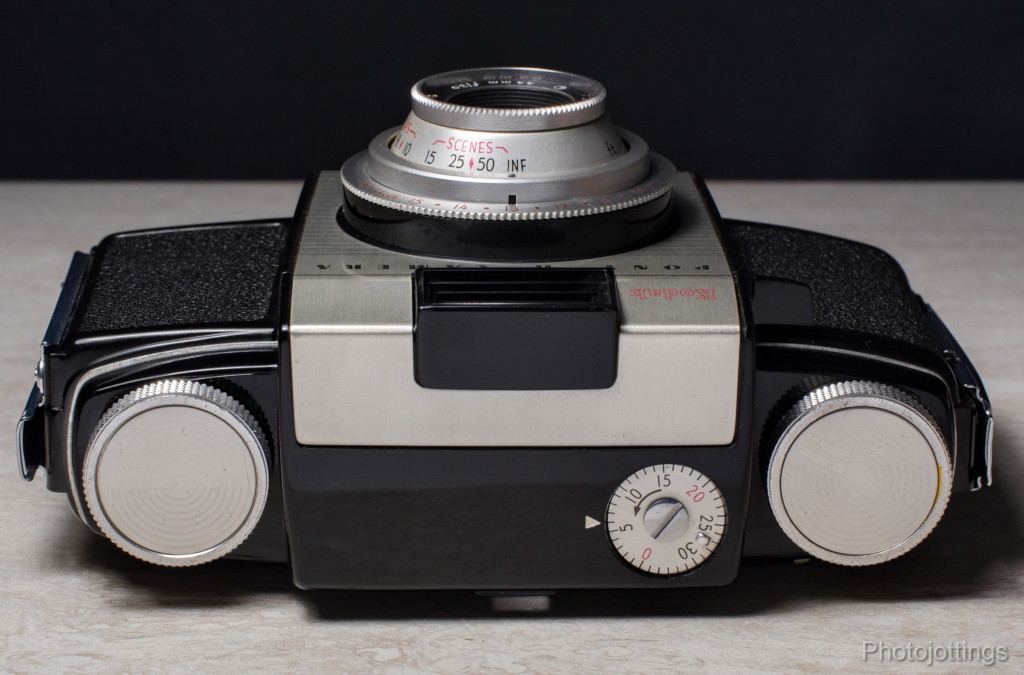 On top we have the rewind knob on the left, and the advance knob on the right, both are marked, but hard to see in this picture.  The count-down shot dial has to be manually set to the number of exposures on the roll of film.  You can’t get a 20 exposure roll now, however, you simply turn the dial to match the number of exposures to the white arrow.  For 36 exposures, turn the dial so the red 0  is at the white arrow, but only after you’ve loaded the camera and are ready to shoot. 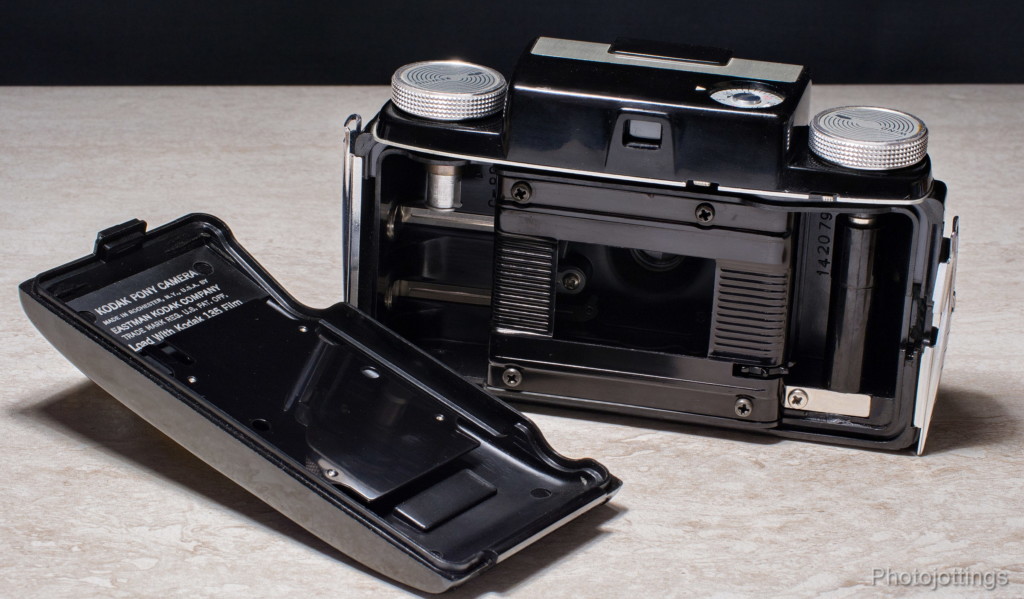 The back comes off completely, separating from the right side with a sliding latch, and by slot and groove on the left side.  It has a spring loaded pressure plate to hold the film firmly against the gate.  In this view you can see the small viewfinder; unfortunately, there are no guidelines.  The camera neck strap goes through the slots in the top of the chrome latches, but only the right side has the latch. 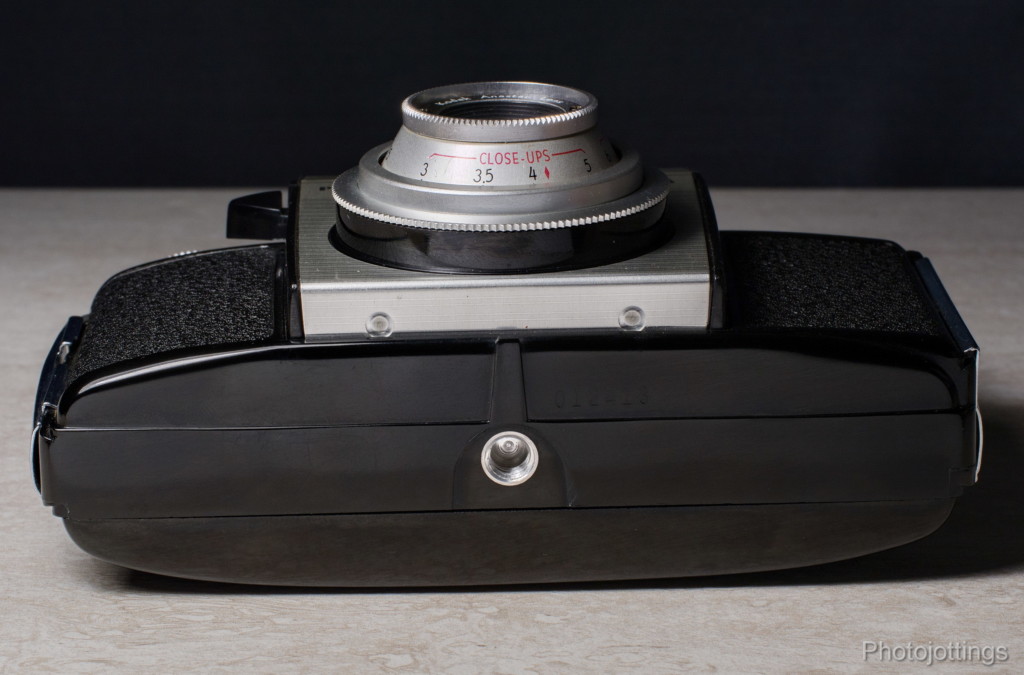 Kodak put a tripod socket on the bottom, but it’s really useless with the fixed shutter speed, and no bulb or long exposure mode, and no cable release option.  The serial number is stamped on the bottom.  The manual recommends you record this number so you can give it to the police in case your camera is ripped off; good luck with that nowadays. 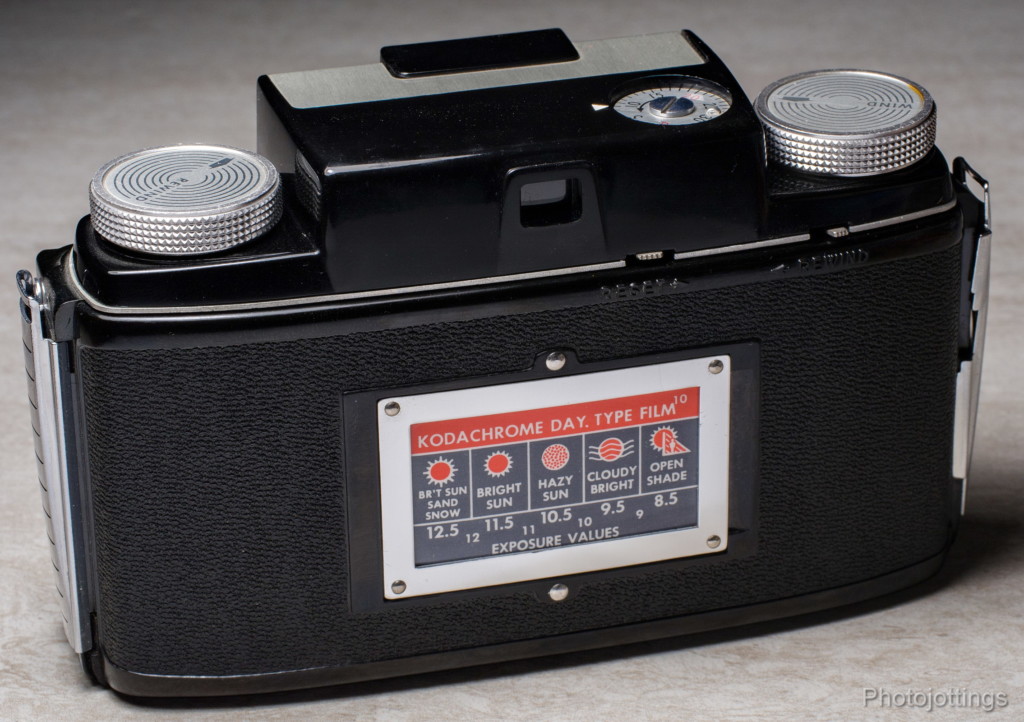 The back reveals the exposure card holder, along with the reset lever beside the little viewfinder, (which allows you to take a double exposure).  Next to the reset lever is the rewind lever. 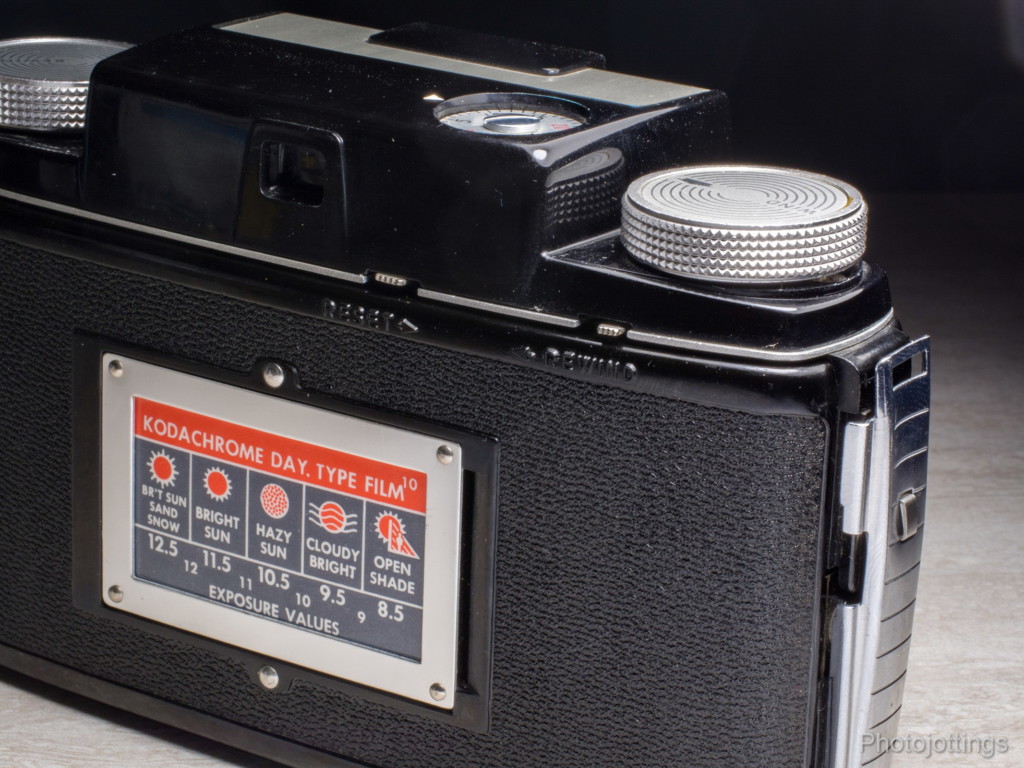 Here’s a better view of the two levers.  When loading the camera with film, you have to keep pushing the reset button after turning the wind knob two or three times so the film is wound safely around the take up spool.  The manual refers to this as ‘lock-up’ and says to do it four times, but that’s wasting a shot or two.

Here are the original 7 exposure cards that come in a plastic sleeve, and are used for each type of film.  On the back is flash information.   Basically you set the lens to the appropriate exposure value for the conditions on the card.  These cards slip in the holder on the back of the camera.  Good grief, how confusing for a novice.  It’s actually quite useful for slide film, but not print film.

The Kodak Pony II is much larger and heavier than the better performing and much handier Canon Sure Shot Zoom 85.  Yes I know it’s much newer, and requires batteries, but at least you won’t get radiation poisoning from the lens.

Here are some bad test images scanned on a Nikon Super Coolscan 9000 ED.  All are 3000 pixels wide; there is no additional resolution from scanning at a higher sample rate.  Kodak Gold 200 used for all shots.  Click for larger images. 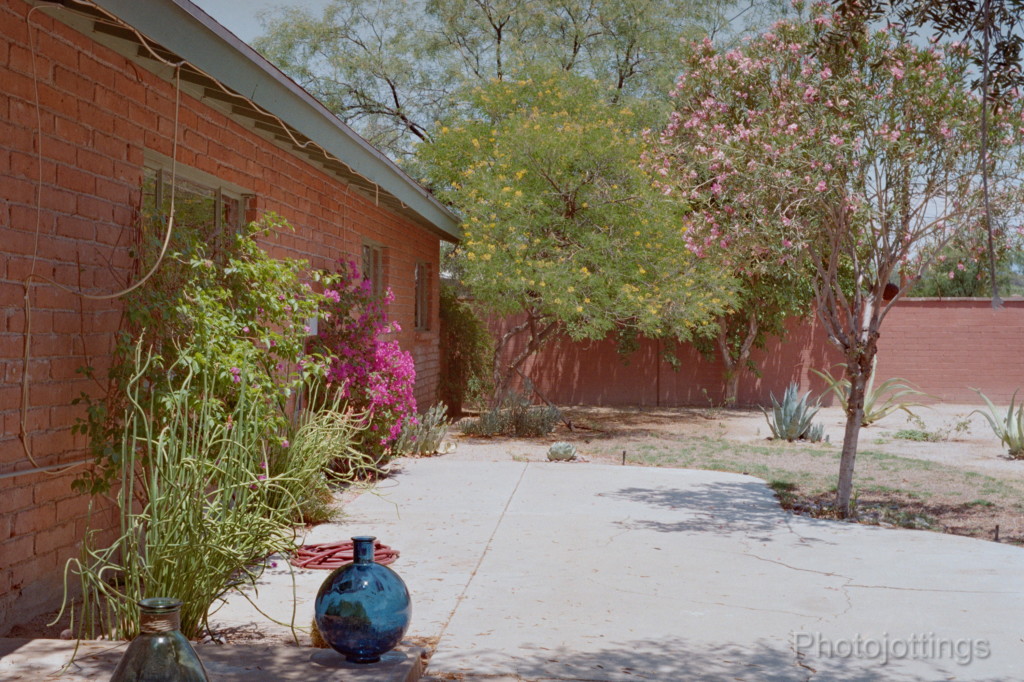 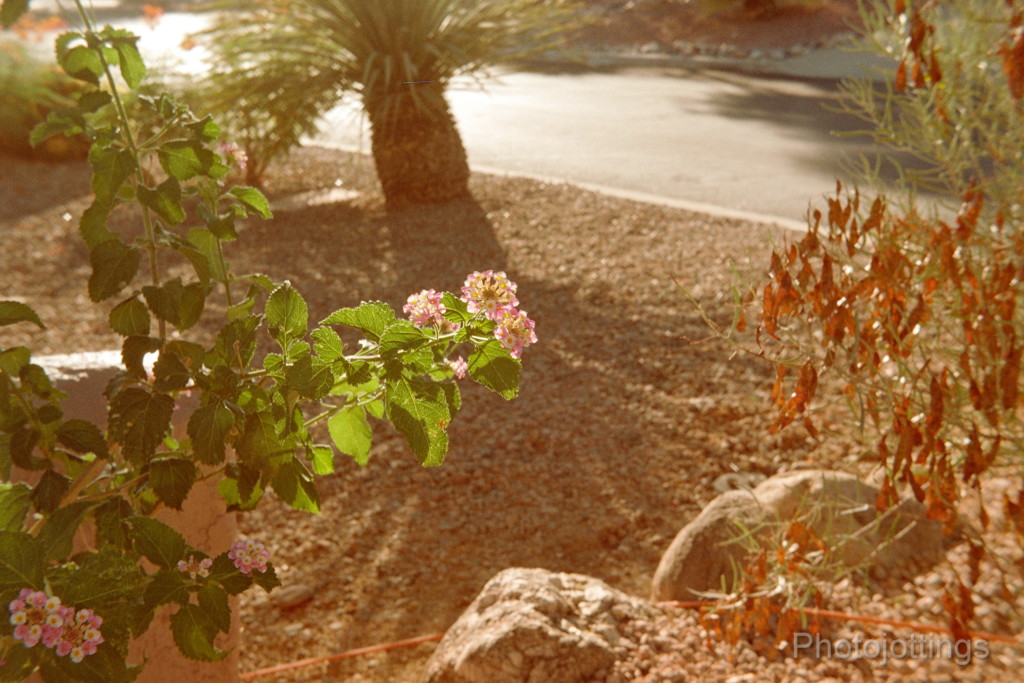 Close focus; I actually got lucky and nailed the focus! Probably around F/11 or EV 12-13.  Check out the diamond shaped background blur. 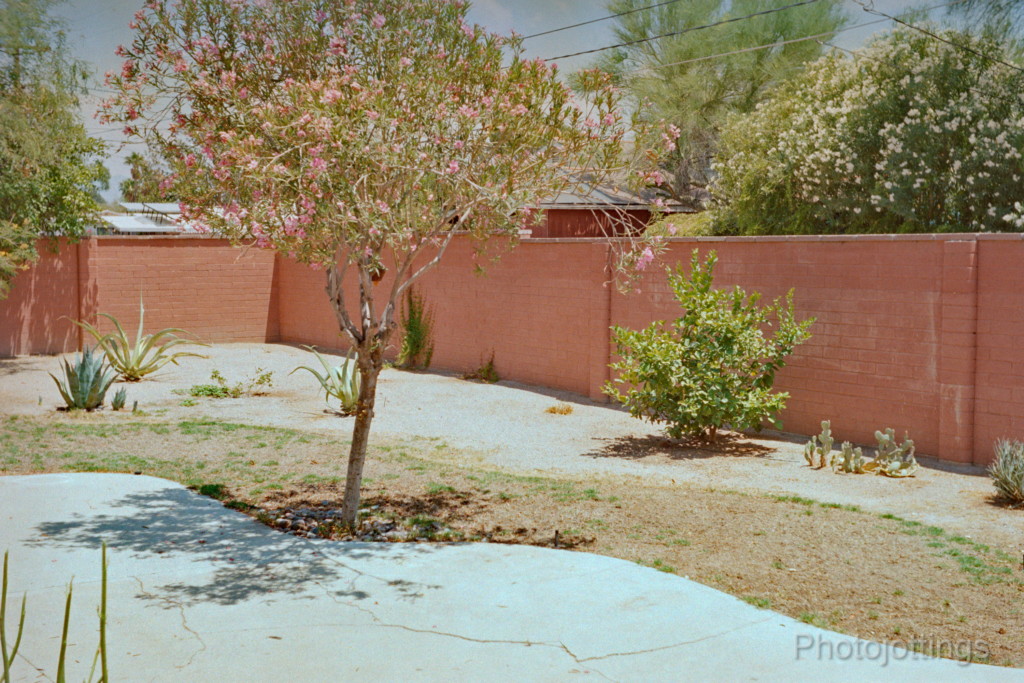 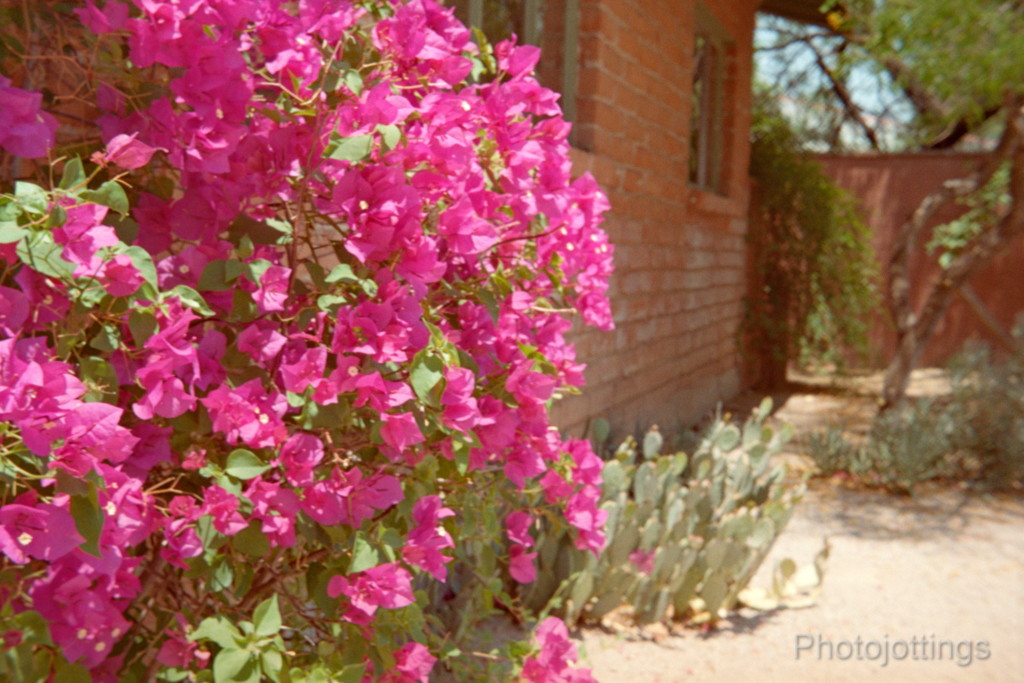 Close focus with a wide open aperture, EV 9.5; it’s a bit on the soft side. 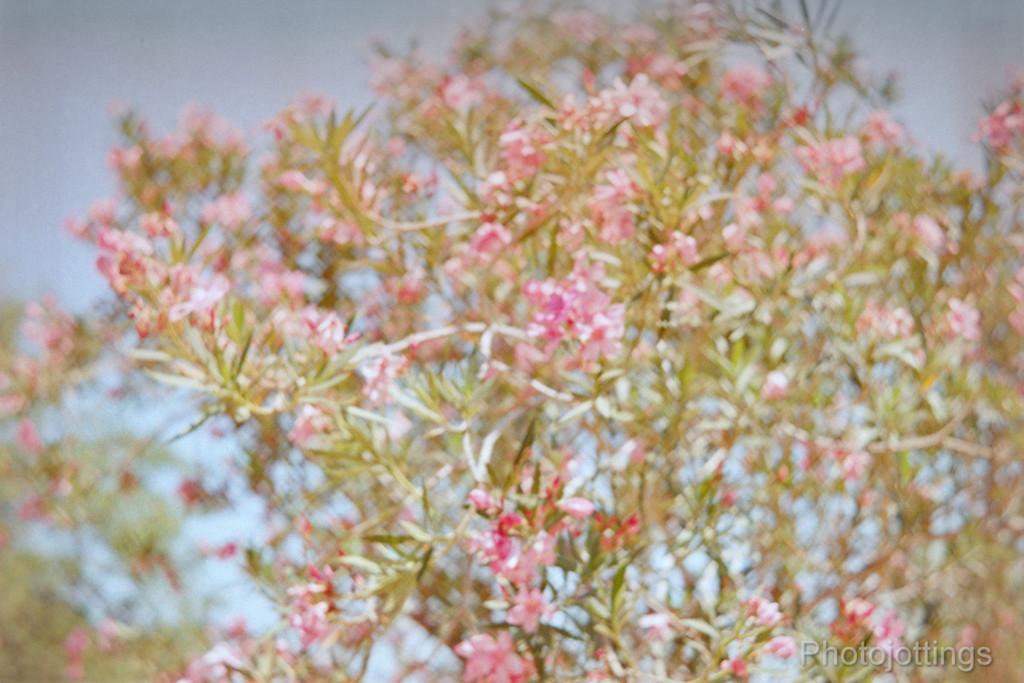 Awful picture, but shows the cross-hatch blur pattern the diamond shaped aperture causes when wide open at F/3.9 or EV 9.5. 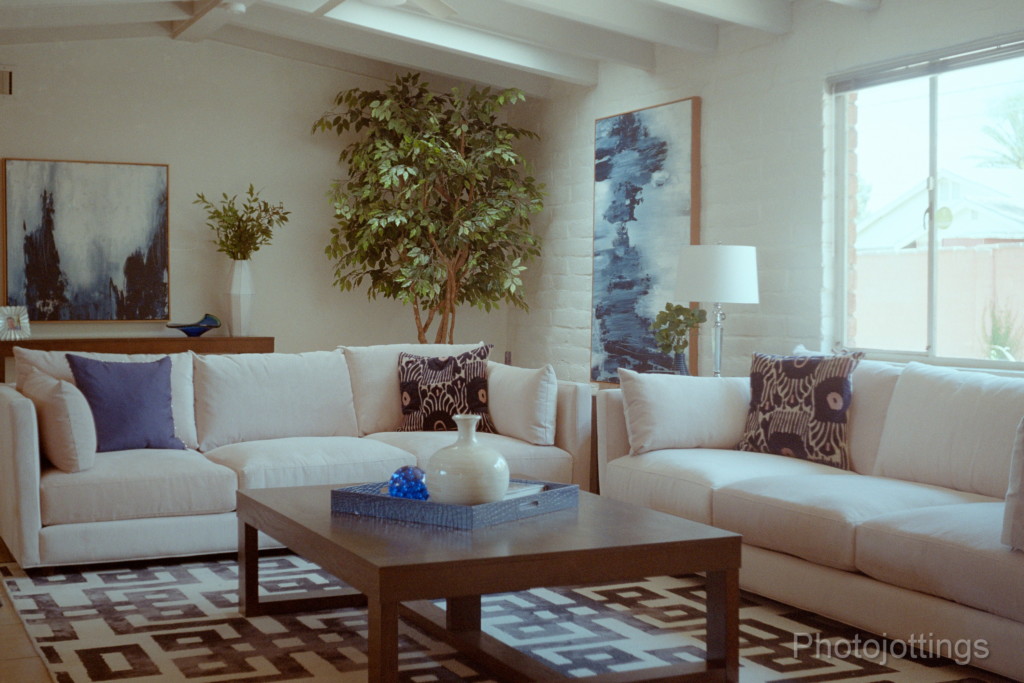 The Kodak Pony II is a fun camera to take out for a day of snap shot making, and it turned in a decent review, but I think it’s one and done for me. The biggest problem is the low shutter speed, it’s about 1/30th second; and causes too many blurry photos, especially when you add in the rough action of the shutter lever.  There’s also no long exposure mode which is surprising as it would be really easy to add on to the single speed shutter, oh well.

Lens performance is mediocre to good.  I see a soft image at wide apertures when focusing close, but at longer distances it’s actually pretty sharp wide open, see the interior shot above.  At small apertures of F/8-11, the lens is pretty sharp across the frame, see the first shot of the backyard.  The colors seems neutral, if not dull, and need a boost in photoshop to look right, at least in my opinion.  Unfortunately, I wasn’t able to hold the camera steady enough for a more thorough lens evaluation, so what you see is from a single roll of cheap film.

With the negatives out of the way, there are a few pluses for the little Pony II.  I do like the manual aperture selections; they’re easy to set once you figure out what the F/stop equivalents are.  Basically, at EV 9.5 the aperture is almost at F/4, and each dot is a full stop thereafter, so the last dot between 14 and 15 would be about F/20, and 15 would be F/22.  The focus ring is marked at nine different distances, with an indicated range from 3′ to 50′ then out to infinity, so if you can guess the distance correctly and transfer that to the focus ring, you should have sharp shots.  My copy seemed pretty accurate using the focus index marks, so when I was able to hold the camera steady, the shots came out pretty sharp. The focus ring is damped appropriately, and stays put when you set it.

All said and done, the Kodak Pony II is a fun camera to take out and shoot some snaps when you get bored.  However, I’d pass on this camera for any serious shooting and stick with a much faster camera in the same price range that takes better pictures, like the Minolta Freedom zoom 160, Canon Snappy 30, or Canon Sure Shot Zoom 85.