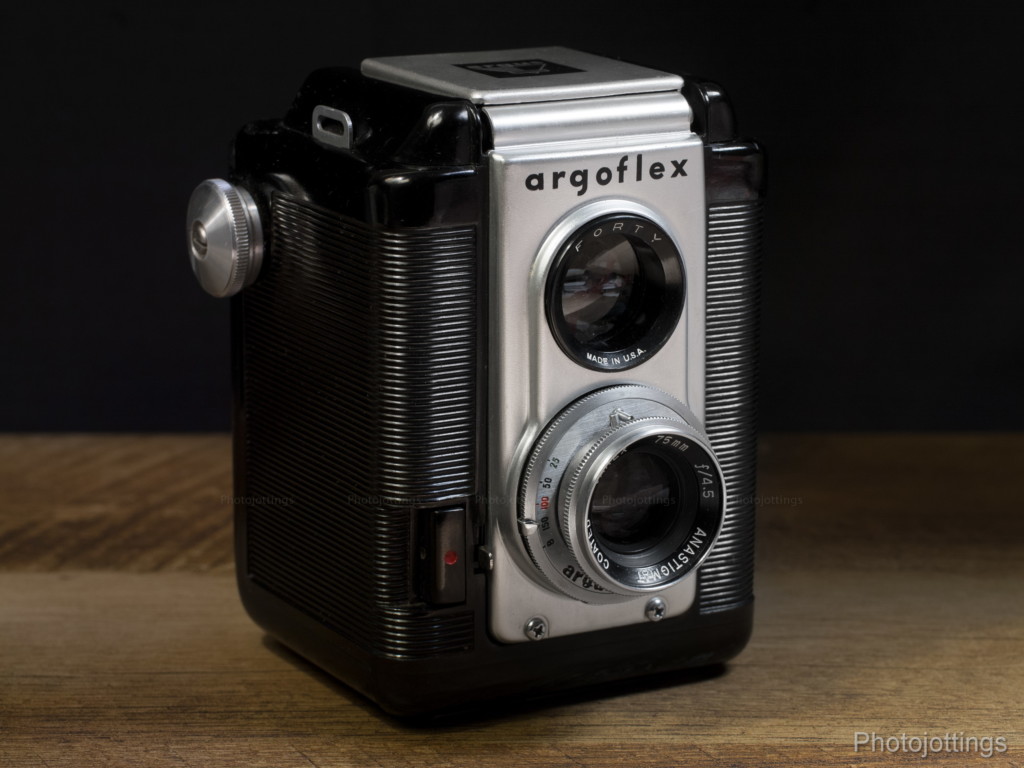 The Argus argoflex Forty is one of the very best of the pseudo TLR 6×6 box cameras, and the best one I’ve used so far.  This little gem is from 1950, and the model production years for the “Forty” ranged from 1950-1954.  Oddly, Argus describes the camera in the owner’s manual as a ‘modified’ twin lens type, with a ‘built-in flash’—a big negatory on both claims.

The argoflex Forty has a lot of useful (and high-end) features such as; focusing lens, nine blade iris with six marked settings, four shutter speeds with bulb, tripod socket, and shutter cable release.  And the best part; it will work just fine with 120 film as long as you use a 620 take-up spool.

This is a ‘fake’ twin lens reflex camera that’s made to look like a real one.  The brilliant plano convex viewfinder is not connected to the taking lens, or viewing lens for that matter, so it’s only used for framing the image, and not determining correct focus as you would on a real TLR.

So how does the little pseudo TLR perform?  Read on, and be sure and check out the test shots and samples below.

Made in; Ann Arbor, Michigan, USA.

Original Price; listed at $39.95 for camera only; that would be north of $400 today.  Originally carried a one year manufacturers guarantee.  Now about $15-$30 in good working condition on ebay.

Box contents; unsure, but probably the camera, instruction manual and neck strap, along with a leather case and flash unit with the deluxe kit or outfit.

Viewfinder; 1-3/8, (34x34mm) square plano convex glass, with flip-up hood.  The viewfinder is not connected to the focusing lens, it’s only for composing the image.  The angle of view is poor, so you must view it dead-center.

Approximate resolution; good film and technique will make very sharp 16×20″ or larger prints; and about the same as today’s better digital cameras with a good lens.  See sample images farther down the page.

Distortion; none of my images show any discernible distortion, see picture below.

Light fall-off; I see moderate “corner shading” at all apertures, with a harsh transition zone noticeable at F/16-22.

Background blur or “bokeh;” I’m not able to determine this with the pictures I’ve taken so far.

Lens; Argus, coated Varex Anastigmat, 75mm (3″) F/4.5, three element glass lens.  The outer diameter of the lens ring is 30mm; you may be able to use an Argus 30mm adapter and filters, but I haven’t tried any.

Double exposure prevention.  Yes, but has a push lever by the shutter button that over-rides the system for those creative type shots.

Crippling features and omissions; nothing really, it’s loaded with everything you need for professional picture taking.

Quirks; the shutter button must be pushed in deeply to trip; in other words, there’s too much travel for my taste; however, I haven’t yet had a blurry shot.

Problems; none, other than the typical issues from an almost 70 year old camera like minor light leaks, sticky shutter etc.  The shutter speeds on my copy are slow; the top speed of 1/150 is actually about 1/80s, and the slower speeds are less than half that, so the only safe hand held speed is 1/150th.

Other versions; based on the 1949 Argus ’75’ model with single speed shutter and meniscus lens.  Initial 1950 argoflex Forty model had plastic winding knob, and ‘argus 40’ on the face plate for a few months, but later models were called ‘argoflex’ and had a metal winding knob.  Also minor variations in markings.  Don’t confuse the ‘Forty’ with the ‘Super Seventy Five’ that has a focusing 65mm F/8 lens with selectable apertures.

Go here to see the owners manual and make sure you tip the site owner. 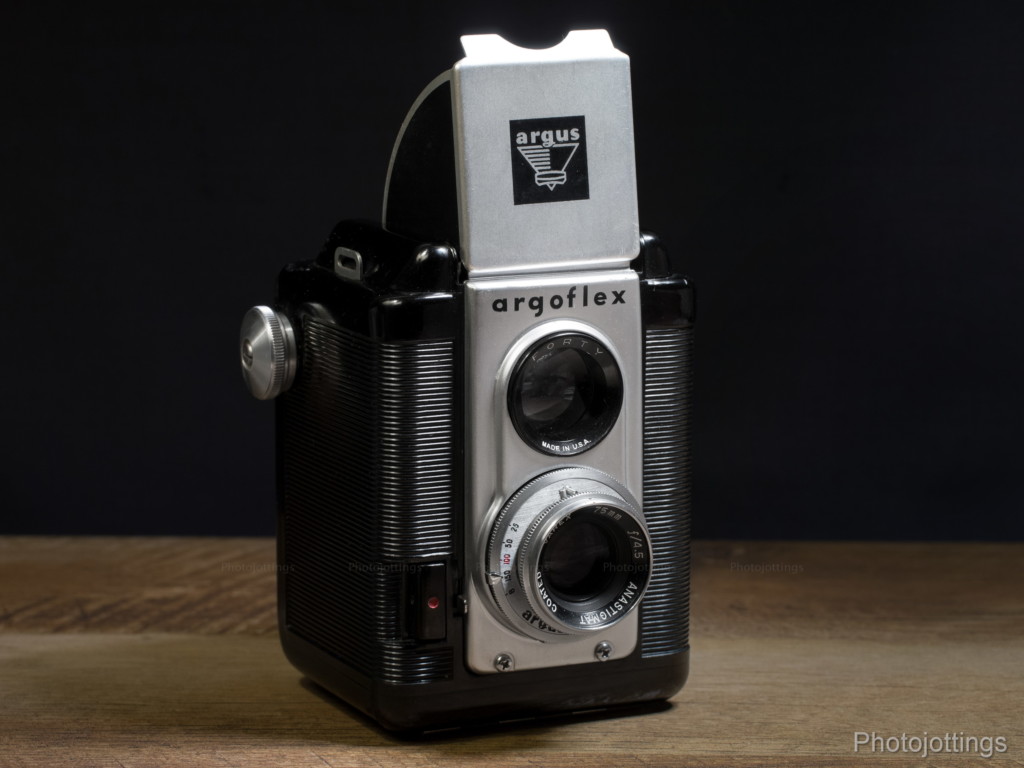 The hood is up, the shutter is cocked, and this handsome camera is ready to take some nice pictures. 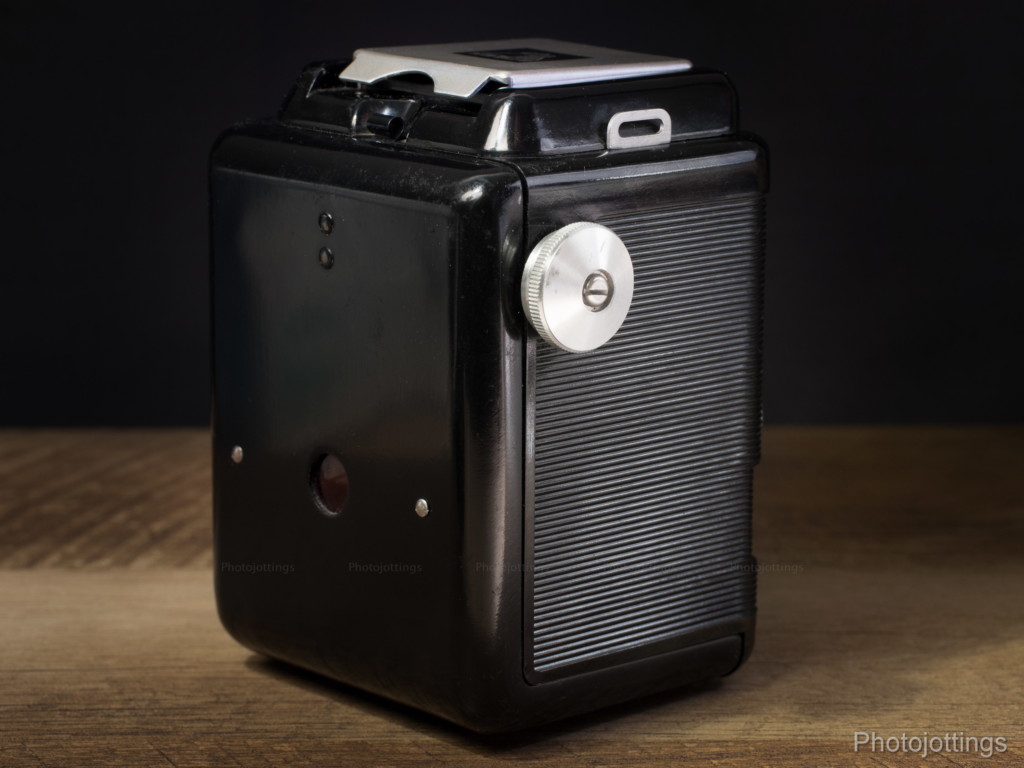 This view shows the bright metal winding knob, neck strap loops, and the red window for setting the film frame number.  The hood flips up by lifting the tab just above the back cover latch. 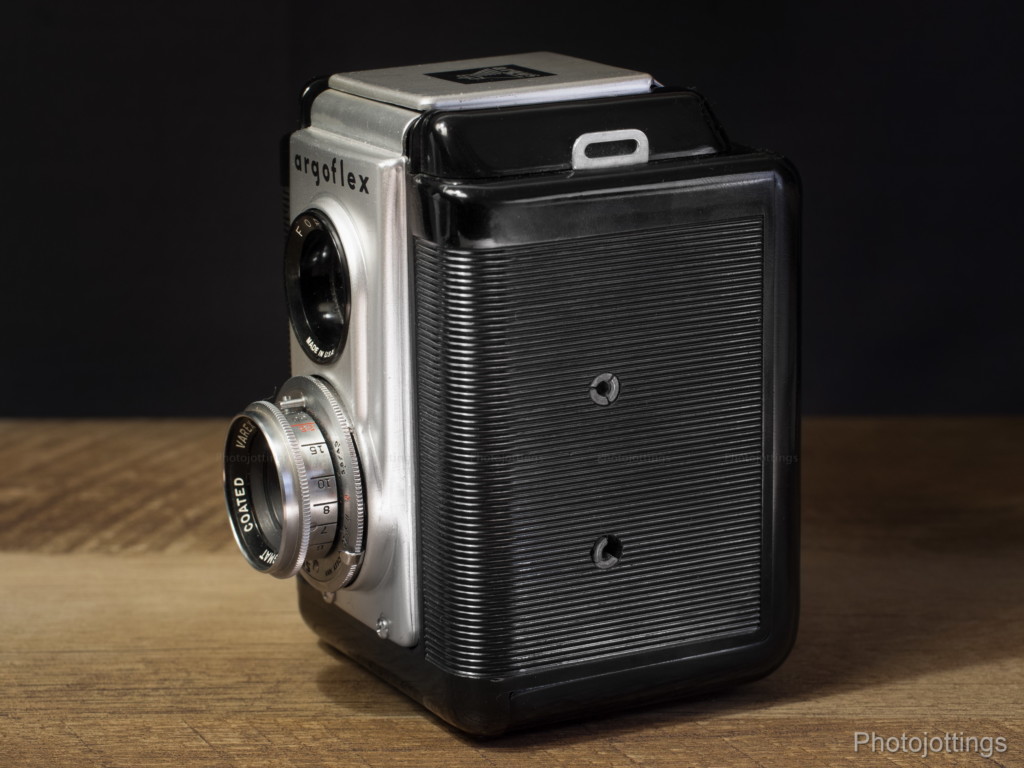 Argus uses sliding pointers for setting the aperture and shutter speed.  The red filled markings of 1/100th speed, aperture of F/8, and distance of 25‘are used for a ‘universal setting’ that will allow you to take ‘average pictures in bright sunlight.’  The shutter speed of 1/25 is filled with light green, so I’m not sure what that’s all about.  Along the left side are the flash contacts, and on this copy they’re dried up and broken. 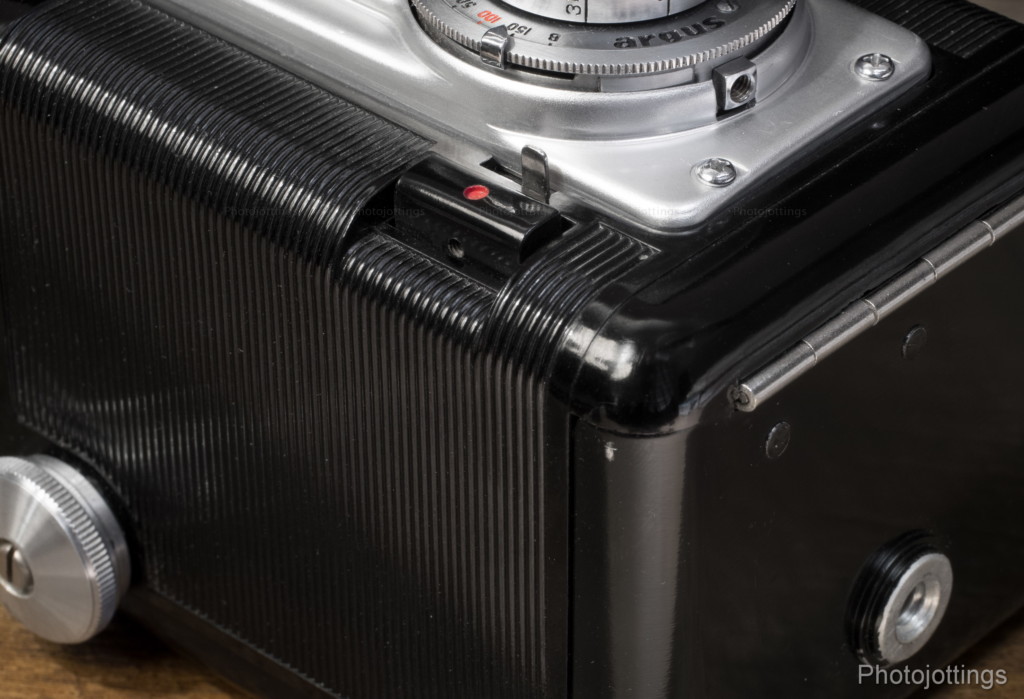 The 1/4-20 tripod socket in on the bottom.  The shutter button has a red dot in the middle, and the silver lever next to it is the double exposure prevention over-ride.  In this view you can see the shutter cable release socket; unfortunately you can’t use this in conjunction with the double exposure over-ride feature. 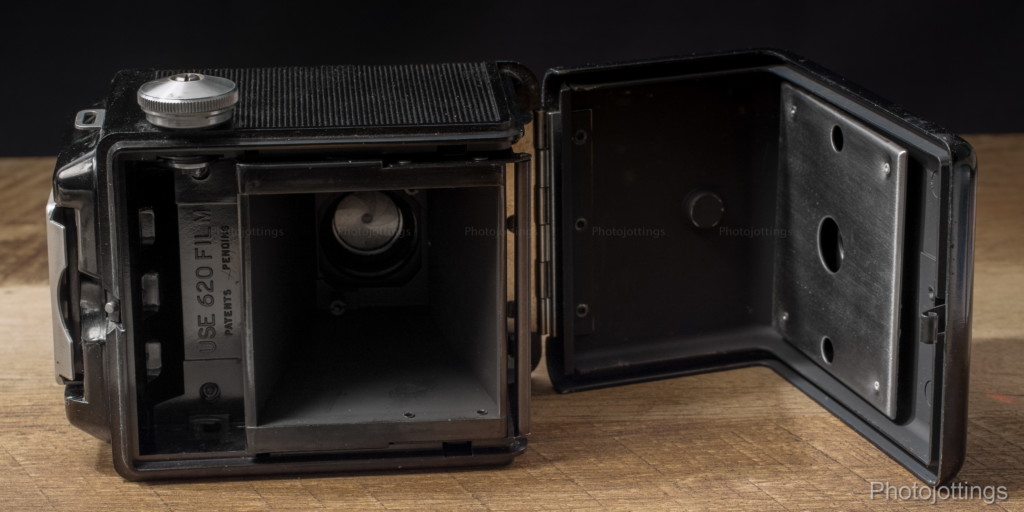 With the back cover open a number of things are visible; the film chamber is covered in flat black paint to avoid reflections.  The take-up spool goes at the top, or left in this picture; if using 120 film, make sure you use a 620 spool here.  The argoflex has a real spring-loaded film pressure plate; visible attached to the back cover.  The back of the lens and aperture blades can be seen inside the film chamber. 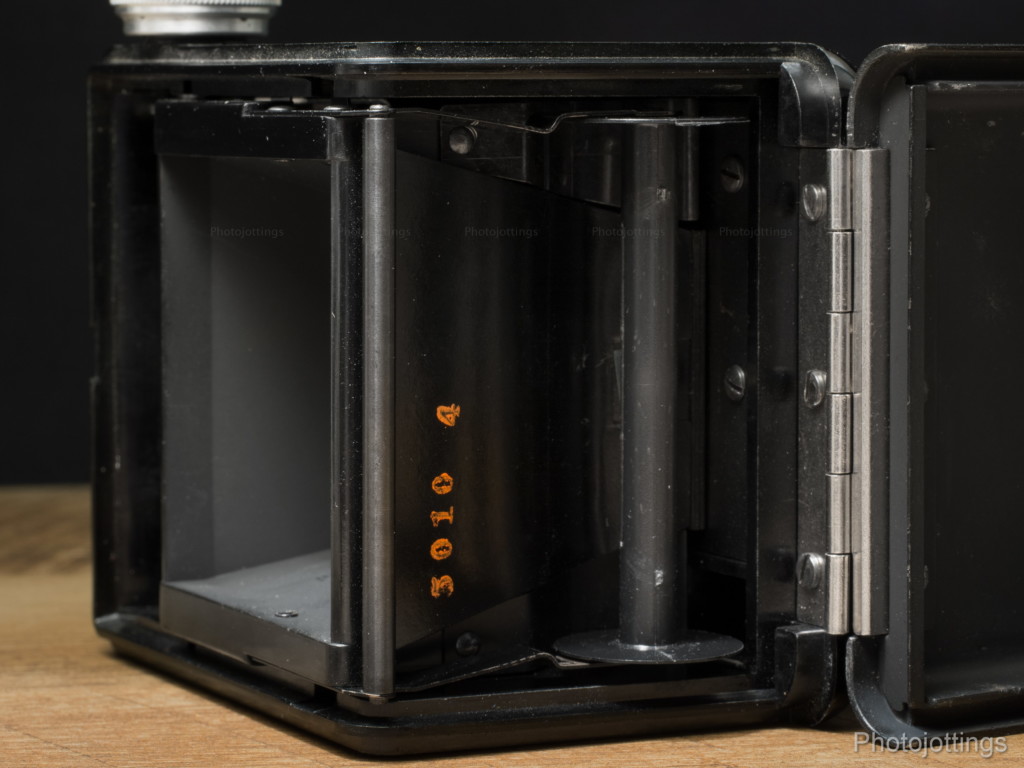 Under the film chamber is where the supply spool goes.  A 620 spool is shown, but you can see there’s enough length for a 120 spool too.  I believe the orange numbers indicate the year and month the camera was made.  5010 means the 10th month of 1950.  Not sure about the 4, maybe the fourth week in October? 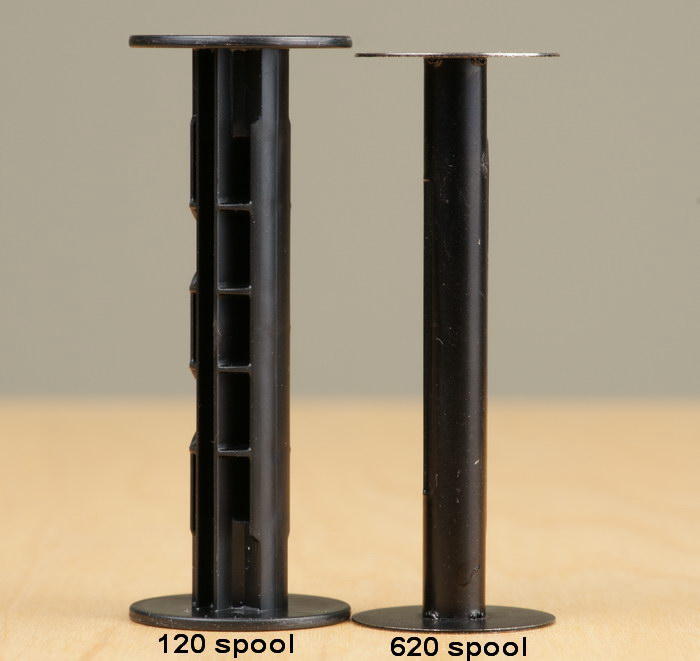 The 620 spool is shorter, but there’s still enough room inside the chamber for the 120 spool, so no modifications needed here. 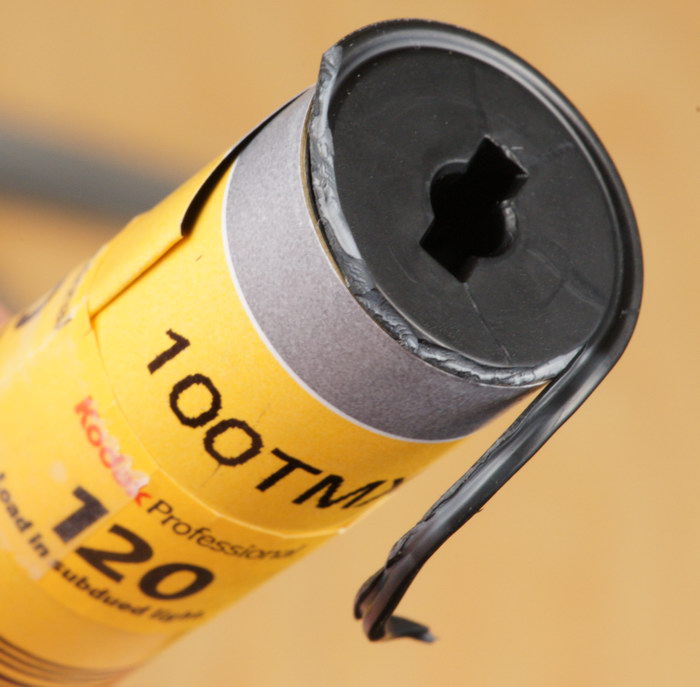 Trim both spool ends with a pair of common household scissors, cutting the outline as you see above.  Use the deepest part of the scissors, towards your hand and make short “cuts” until you’re all the way around.  This image is of a Kodak spool, Fuji uses a slightly different design, but you still trim it the same amount. 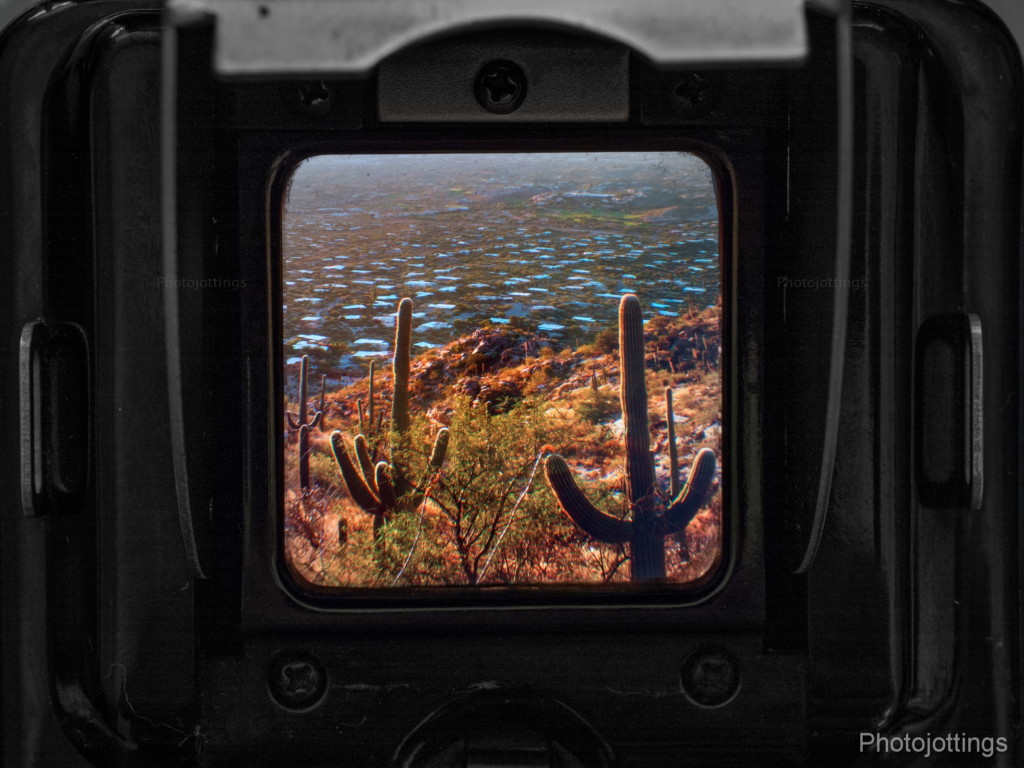 The viewfinder is very bright when looking directly into it, even in low light.  However, don’t judge the focus from this view; it’s always sharp, and used just for framing your shot.  Also, the view in reversed, meaning what’s on the right side in real life shows here on the left side, but you’ll instantly see this when viewing your shot. 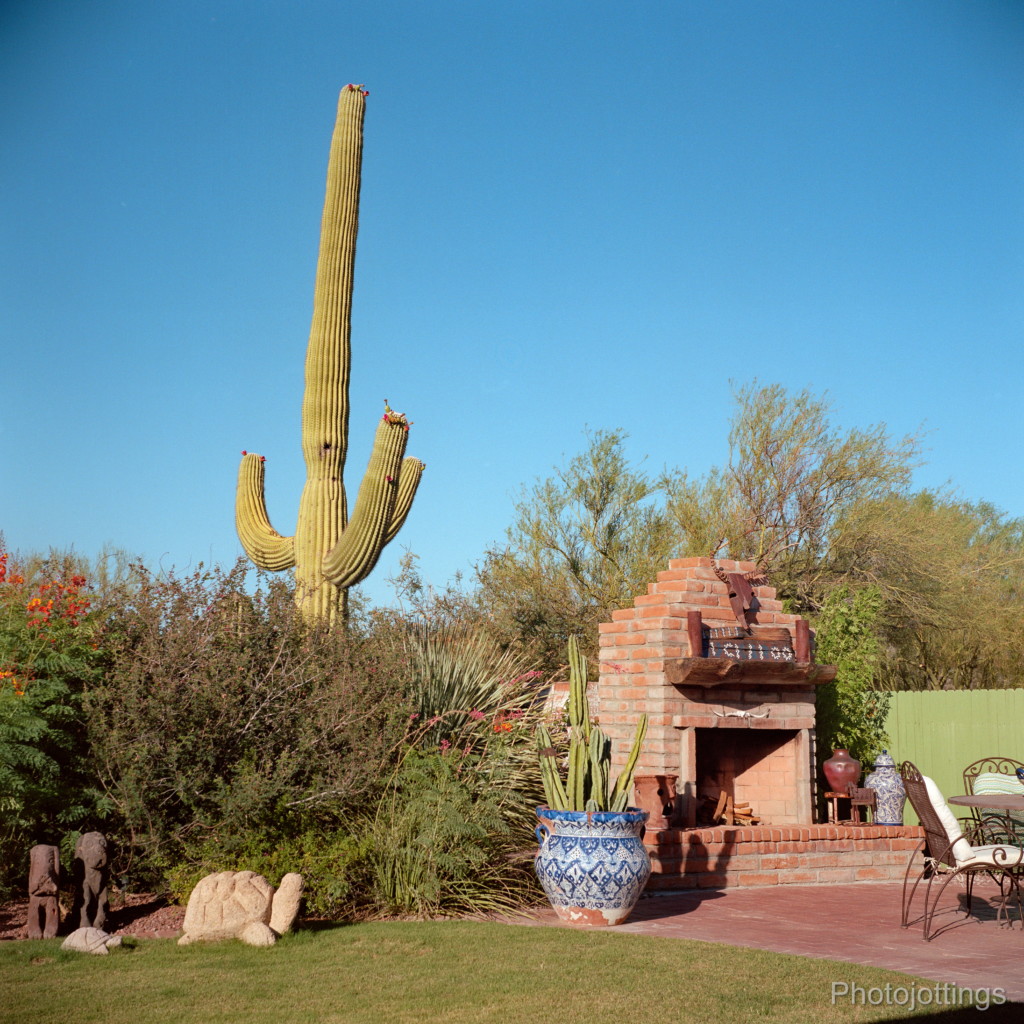 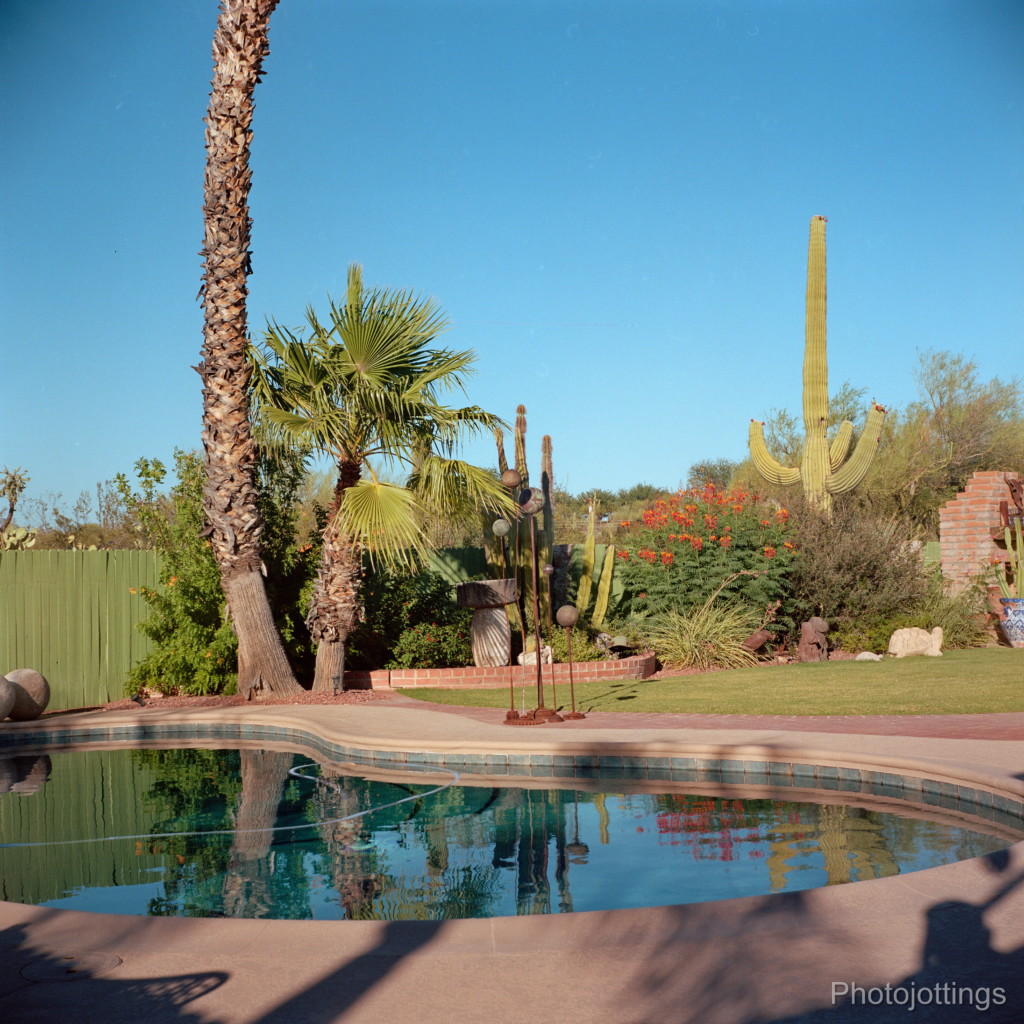 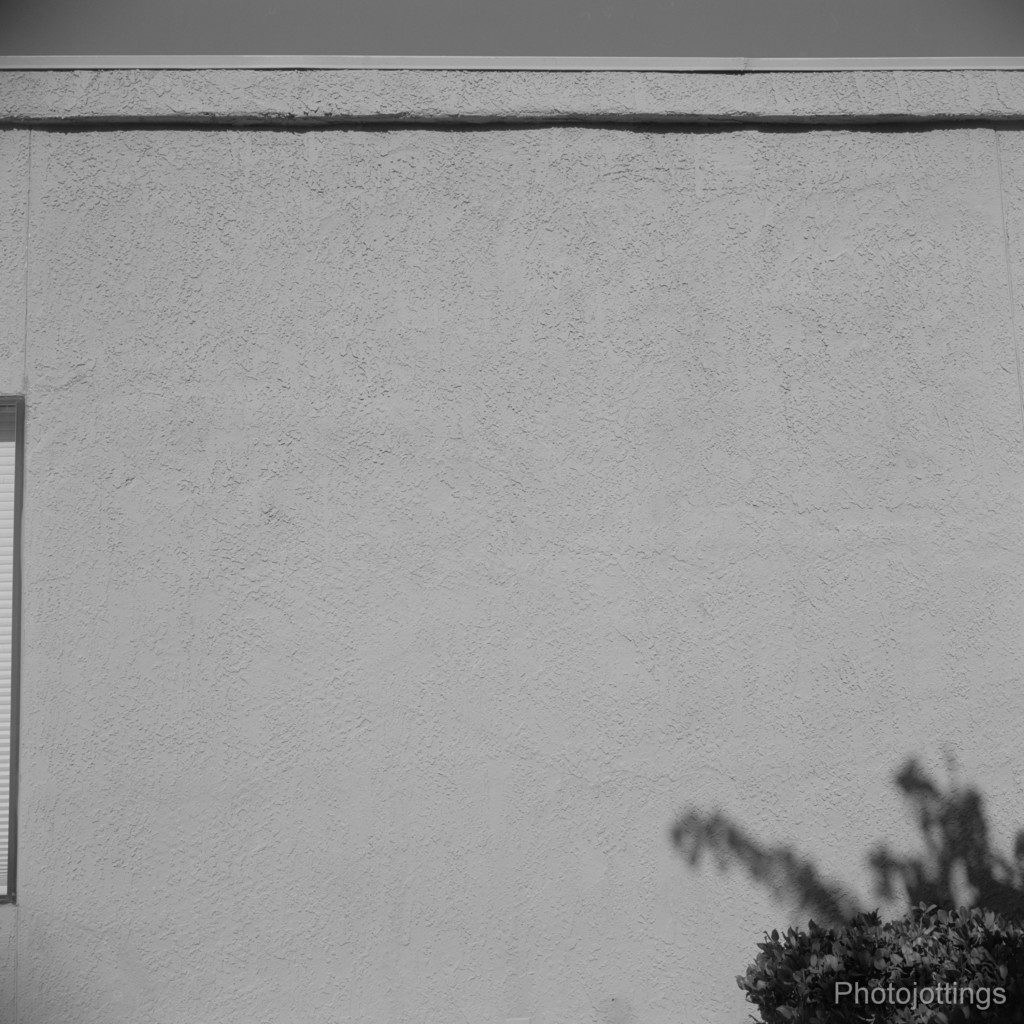 The top of the wall is straight, meaning no distortion.

All test shots are displayed at 6000 x 6000 pixels wide when enlarged, and that’s all the resolution included in the film.  Scanned on a Nikon Coolscan 9000 ED.

Here is our standard Mountain test scene, this time using Kodak Ektar 100 film.  A tripod and cable release were used, but no filters.  Click to enlarge. 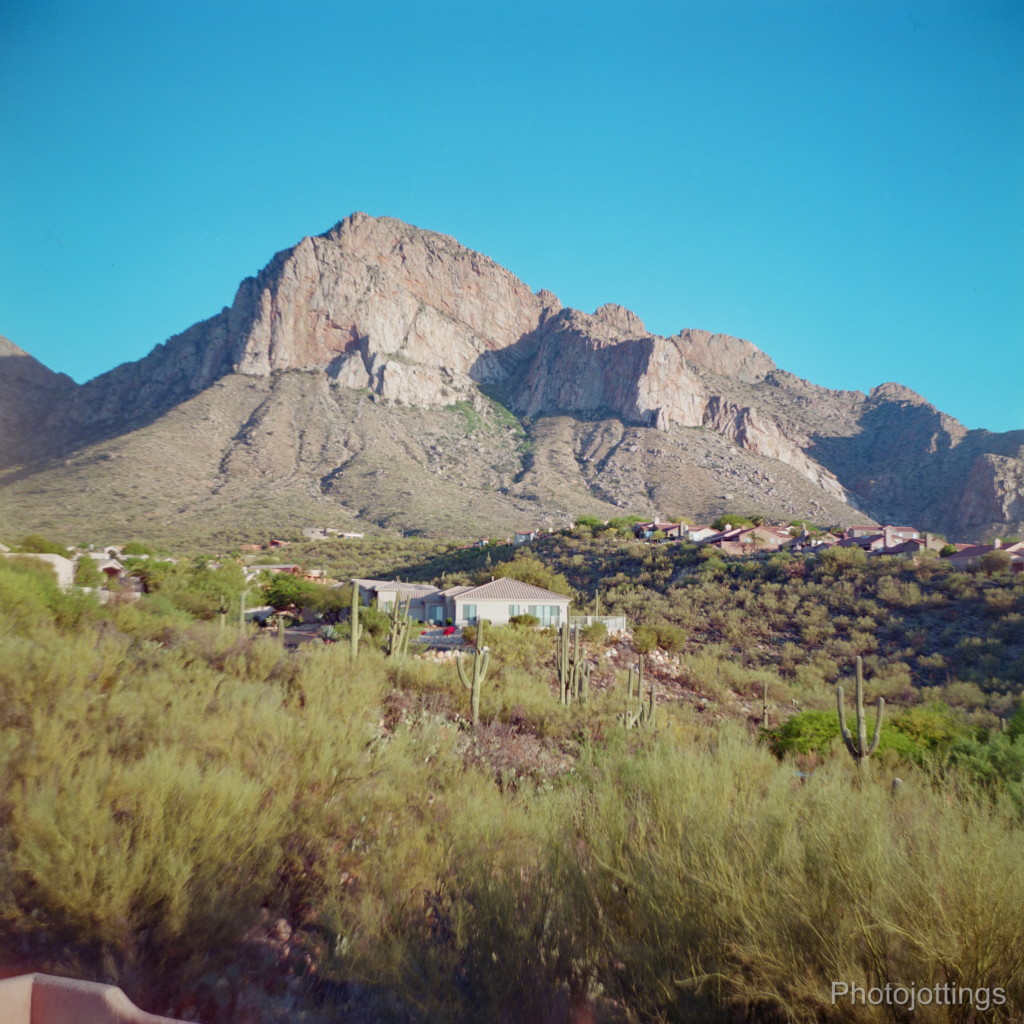 F/4.5.  Quite sharp in the middle, but the sides are soft, especially the left side.  I see a minor light leak along the left side and bottom. 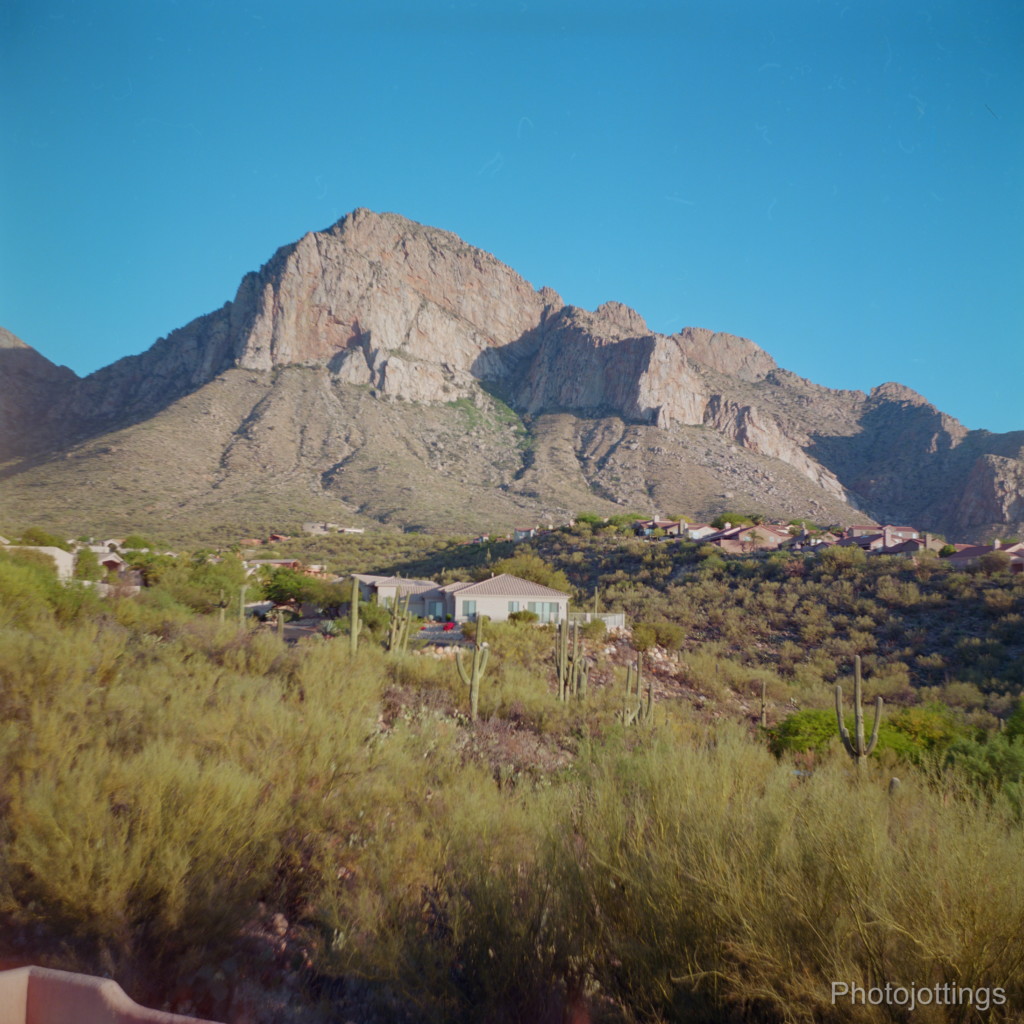 F/5.6, no increase in contrast or sharpness.  I may have jiggled the camera slightly in this shot as the center isn’t as sharp as the F/4.5 shot. 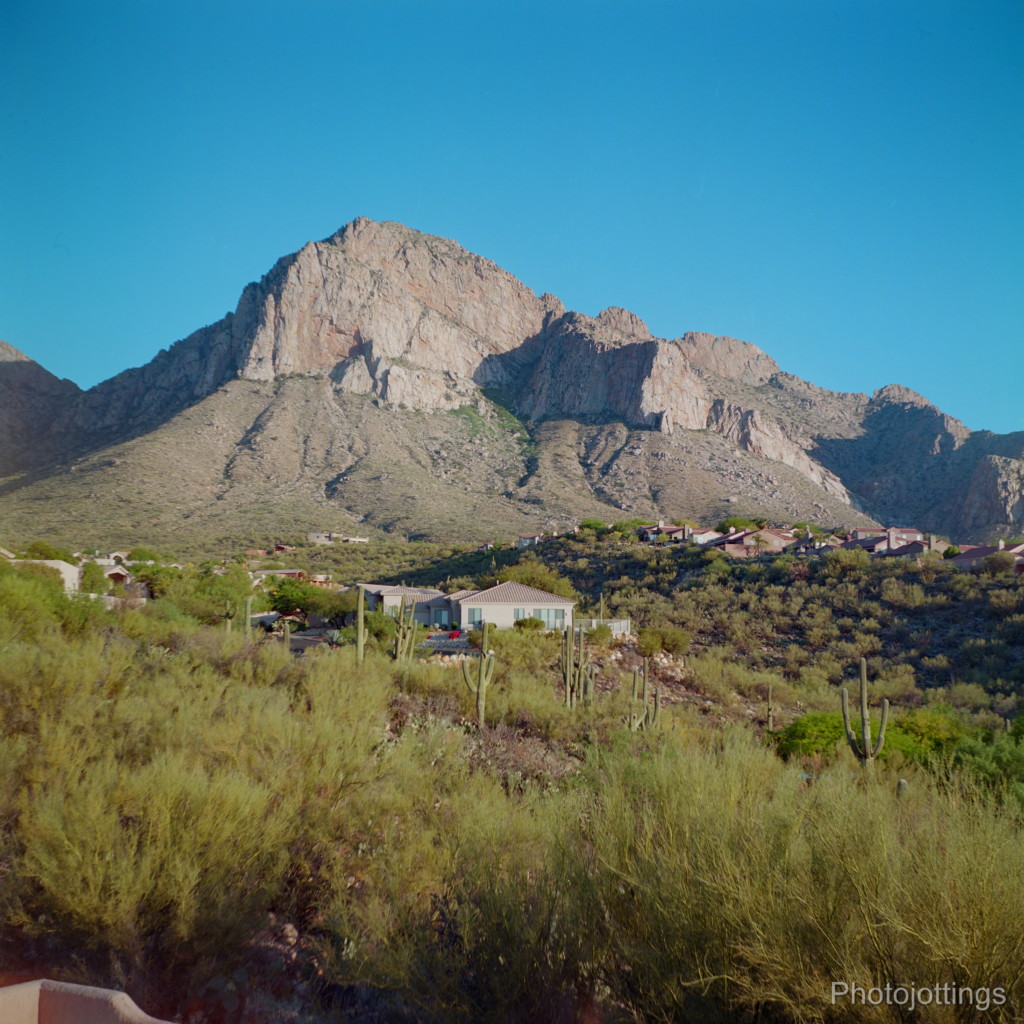 F/8.  A big jump in resolution and contrast over the entire image except for a small portion in the middle, probably from film flatness issues. 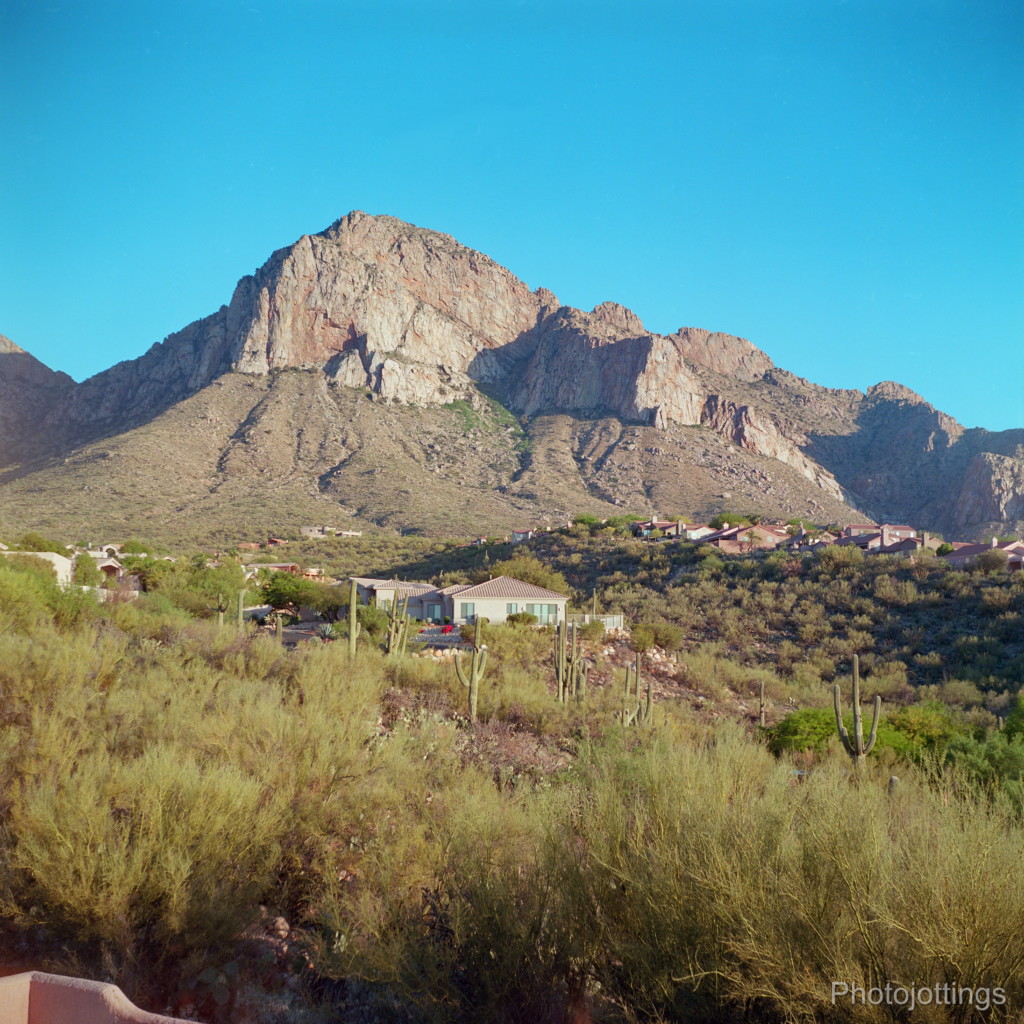 F/11.  Another nice bump in contrast and resolution across the frame, a very usable aperture for large prints. 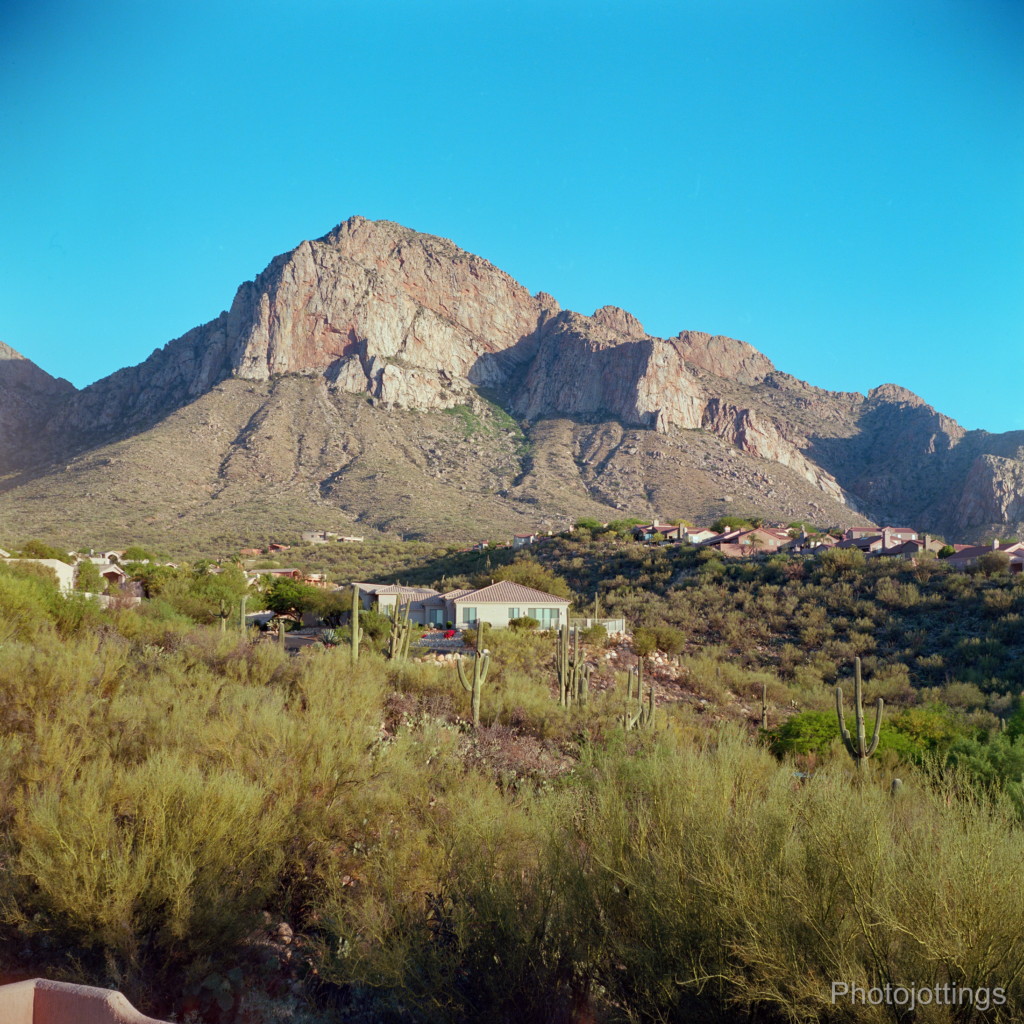 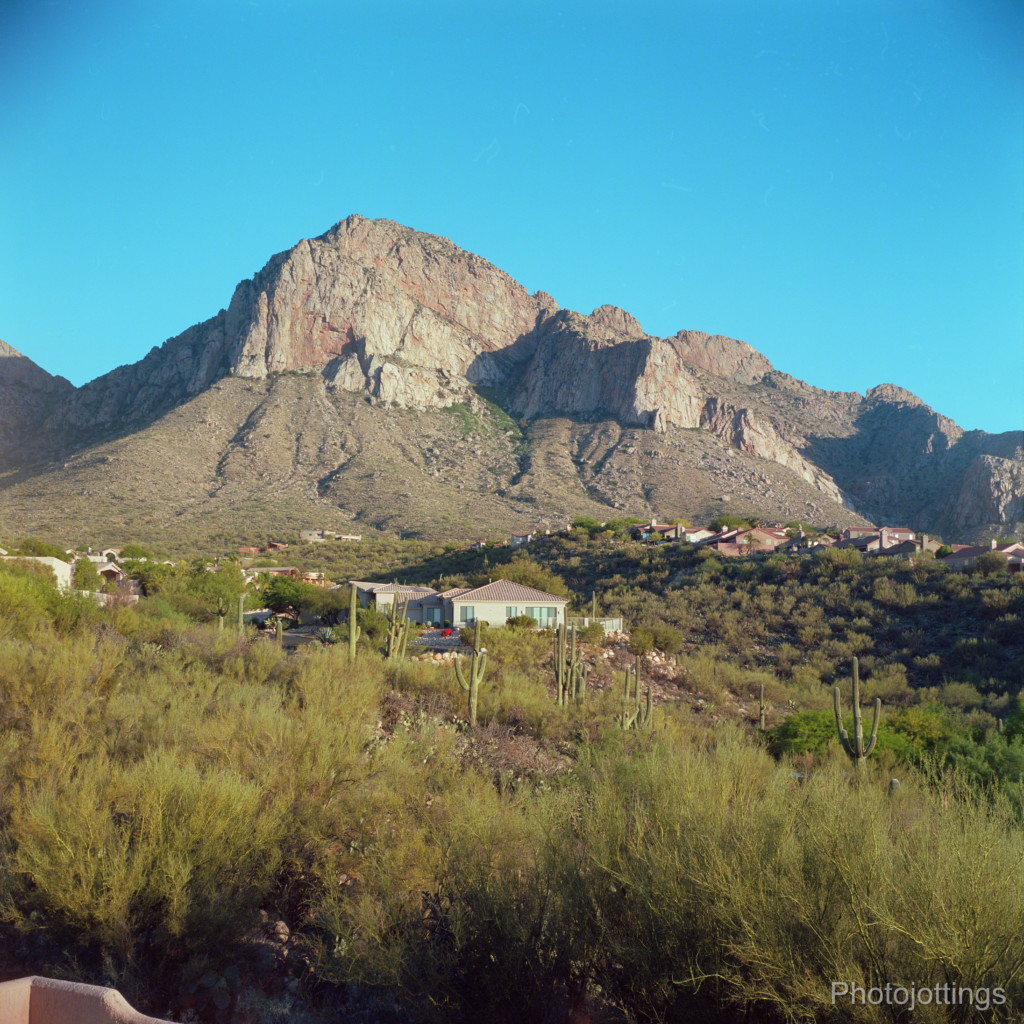 F/22.  I see minor softening from diffraction in the mountains, but the extreme sides and some areas in the center are slightly sharper from F/16; odd performance and probably a result of film flatness issues.

The diminutive Argus argoflex Forty is one of the best box cameras, or pseudo TLR’s from back in the day.  The lens really stands out as something special for this price range; it’s a coated three element anastigmat that’s very sharp when stopped down, and will make some large, highly detailed prints to hang in your home or office.  The four speed shutter is a nice feature if it works properly; unfortunately, my copy, (and probably most others) aren’t going to be anywhere close to the indicated speeds after 70 years, so you’ll have to treat it as a one speed shutter set at the fastest speed.  However, with a little cleaning and use, you might be able to free it up and use at least another speed setting.

There are some other nice features apart from the excellent lens.  I appreciate the tripod socket, cable release, and bulb mode for those long exposure shots.  The viewfinder is very bright and usable even in low light; much brighter than a real TLR, although you can’t check your focus.  The best feature, (and probably not intended by Argus), is the camera can use commonly available 120 film in the supply side by trimming the spool ends; it’s easy and takes a pair of scissors and about two minutes.  The fit is pretty tight, and you have to do a little finagling to get it in correctly, but It can be done; that’s what I do to shoot these cameras.  Make sure you have a 620 take-up spool.  And make sure you get your spool back from the developer!!

Before we go I’d like to mention a couple of minor issues.  My copy has a small light leak along the left side and bottom of the photo, but not really noticeable a small apertures.  I did tape up the top where the latch is on the last roll and that helped the tiny leak at the bottom, which appears as an orange streak along the middle bottom of the image; see the mountain test shots above.  Also, I’d use ISO 400 speed film for best results in all but bright sun conditions.  I used Kodak Ektar 100 and Kodak Portra 160 and had quite a few dark images when stopped down to F/16-22 during late afternoon.

I’m giving this neat looking little camera two thumbs up for the technical quality of the pictures it makes, and of course the fun factor of using it!

That’s it for the Argus argoflex Forty review, get one from ebay, or a garage sale and have some fun!  Please consider buying through my links and help support the site. Thanks for visiting!