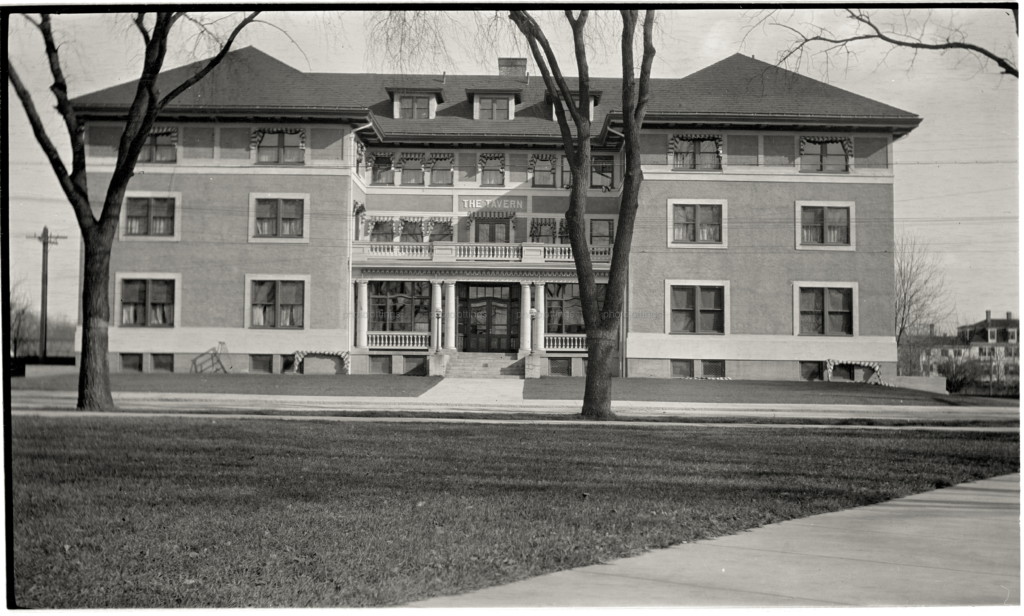 Here’s a sample image from a roll of 122 film, taken in front of ‘The Tavern’ in Mansfield Massachusetts sometime around 1910 according to literature that came with the negative.  ‘The Tavern’ was a Hotel and Restaurant built by Walter Lowney, who years earlier built a chocolate factory down the street, so in this scene the photographer may have been smelling baking brownies while taking the picture!  There isn’t much online information about ‘The Tavern’ in Mansfield, MA, so it’s probably not there anymore; and likely followed a lot of other wood framed buildings from the era and burned to the ground ‘suddenly during the night.’

This picture is a good example of the kind of quality you could get with a simple folding pocket camera over a century ago.

The camera used was probably a Kodak 3A; I have four of them, two with Kodak Anastigmat lenses, and two with Zeiss Tessar lenses from just after the turn of the century, up to the mid teens.  The Kodak 3A produces images 3¼x5½, often called ‘postcard’ format with a focal length of approximately 6¾” or 170mm.  I haven’t reviewed the 3A yet, but I did post a picture using expired film made in the late 1960s, and it turned out great.

Just for fun, let’s guess the time of year and the camera settings.  There are no leaves on the ground, and have probably been raked up; the trees are bare, but the grass looks pre-snow packed, so I’d say late fall or early winter.  Also, the grounds keeper is taking some awnings down for the long winter season, see the ladder and folded up awnings along the front.  I suppose the picture could’ve been taken in the spring, who knows.  I’d guess the lens aperture is set around wide open (F/6.3) for low light, hand held use, because the image is crooked, the depth of field is slim, and the sides are blurry, that’s typical wide aperture performance for the three and four element lenses of the day.

The area of sharpness with the lens wide open is not much more than a slit through the middle from the top to bottom.  However, the Kodak 3a and other cameras that used 122 film could make some super sharp poster sized prints when using a tripod and an aperture of F/22-32.

That’s it for this trip back to the glory days of film!