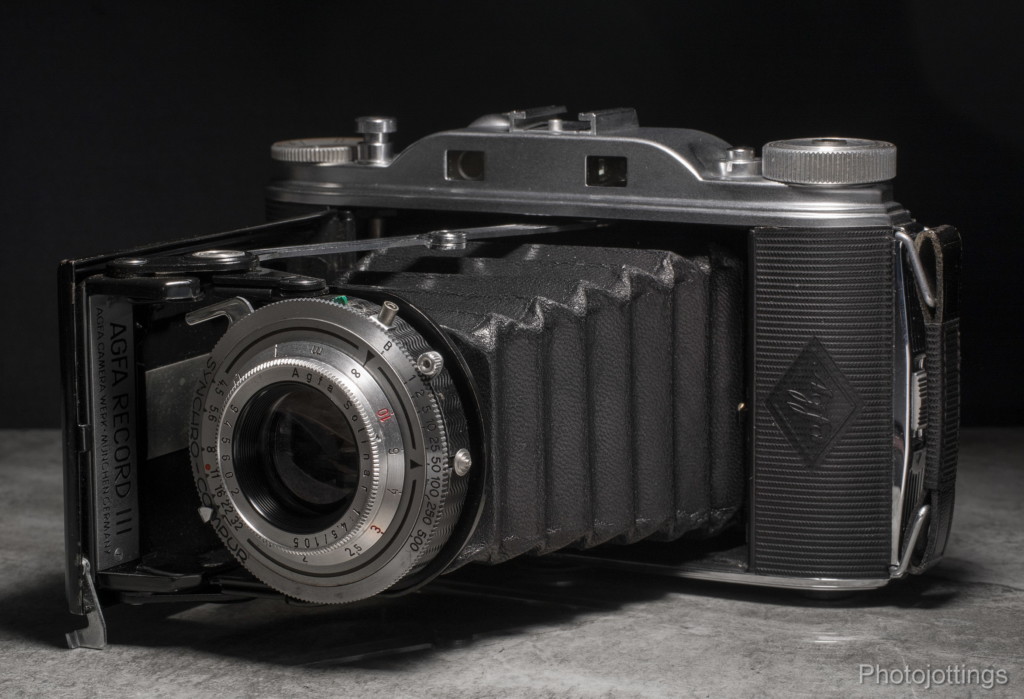 Our review camera for this week is the Agfa Record III; a classic 1950s 6×9 self erecting folder featuring an uncoupled rangefinder, a high speed shutter, and a four element lens.  This is my favorite camera, and I’ve taken more pictures with it than any other camera except maybe my old Canon A-1 I used back in the 1980s.

I really like the fact that it’s very compact when folded; it’ll fit in the back pocket of your jeans, or in a jacket pocket.  These old folders take no batteries, they’re fully manual; you advance the film, focus, set the aperture and shutter speed; then cock and press the shutter and boom, you have a great picture; or maybe just a regular picture!  Thankfully, the camera uses widely available 120 film, and any good photo shop should charge you about the same amount as your 135 film for processing, scanning and printing.

Believe it or not; this Agfa Record III with Solinar lens will come close to the resolution of the Fuji GW690III, and even the Kodak Medalist.  I have dozens of folders, mostly by Kodak and Zeiss Ikon with Tessar lenses, but also a few Voightlander Bessas with Heliar lenses; and this Agfa Record with Solinar lens will out-perform all of them.  How can this be you ask?  I’m not sure, but my copy seems to have the lens centered very well to the film plane, with the lens elements correctly set and the rangefinder nearly perfect.  Unfortunately, based on my experiences, that type of perfection was not normal at all for these folders; in fact, the Zeiss Ikon that my dad bought brand new had the focusing front element incorrectly set, so the images at less than infinity were not even in focus, but the small prints you received looked good!!  It’s not until you look at the film with a 22x loupe, or do a high sample rate scan and view it on your computer screen that you notice the problems.

If you’re wondering what a good folder from the 1950s is really capable of, check out the many sample images below.

Well, that’s enough of a general introduction, let’s look more closely at the specifics of the Agfa Record III with Solinar lens.

Made in; Munich, West Germany.

Price; a few sites are listing the original price as 196 DEM or German Marks, I’m not sure if that’s accurate; it seems a little too cheap; that would be around $46 in 1955 based on the exchange rate of 1=4.2.  Maybe they all copied one person that made an error or just guessed.

Build material; all metal body, with a leather bellows.  Fit and finish are very good.

Box contents; unsure, but probably the camera and instruction manual, or a leather case with the deluxe kit.

ISO; no settings, but back then Agfa recommended an exposure index of ASA 40 in the owner’s manual.

Viewfinder; circular opening, with a magenta hue.  No guide lines or parallax correction marks.  Rangefinder circle is about average in brightness and size, see picture below.

Approximate resolution; good film and technique will make very sharp 16×20″ or larger prints; and about the same as today’s better digital cameras with a good lens.  See sample images farther down the page.

Light fall-off; I see mild to moderate “corner shading” when shooting at F/4.5-8; at other apertures I don’t see much.

Background blur or “bokeh;” looks good when close to the subject at wide apertures, see picture below.

Flash; none, but has cold shoe and 3mm contact nipple with ‘X’ and ‘M’ shutter settings.

Accessories for this model; filters from Agfa include; light-yellow, medium-yellow, yellow-green, and orange-red.  A 37mm slip-on hood is available with a tan/brown leather pouch.

Good features; compact, fits in back pocket of jeans, or larger front pockets.  Rangefinder is very handy, even though it’s uncoupled.  And finally, it has a premium high speed shutter with a sharp lens.

Quirks; you have to keep pushing down the shutter button after the shutter fires for the double exposure prevention to work; although that could be a problem with my copy only.

Problems; many samples may not be ‘perfect’ from the factory, meaning the lens might not be centered, and the focusing might be off.  Older cameras have a host of issues, like holes in the bellows, focusing stiff or stuck  completely, shutter not firing correctly etc.

Other versions; there are models ‘I’ and ‘II’ which did not have rangefinders, and usually had a cheaper shutter and/or lens combination.

Go here to see the owner’s manual and make sure you tip the site owner. 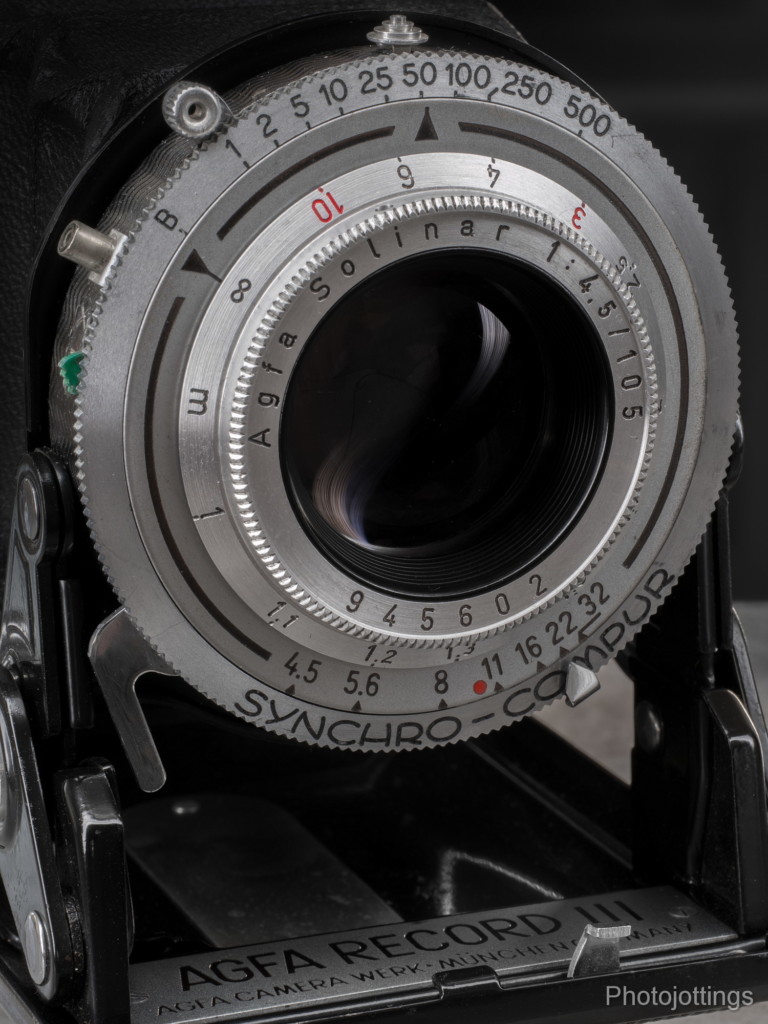 The lens and shutter combination.  Going clockwise, the green lever is for the flash synchronization, next is the 3mm flash contact nipple, then the shutter cocking lever.  On top is the self timer button, you pull it back while pushing the cocking lever all the way over until is stays put.  Press the shutter button and the self timer starts.  Do not use the self timer in ‘B’ mode, or at 1/500, the spring tension is too high.  On the bottom we have the aperture lever and index.  There are no detents, so you can go in-between marks if you want.

The little bent flat tab sticking out at the bottom right is a swing-out leveler for horizontal tabletop shooting.  Funny, but the owner’s manual doesn’t tell you this. 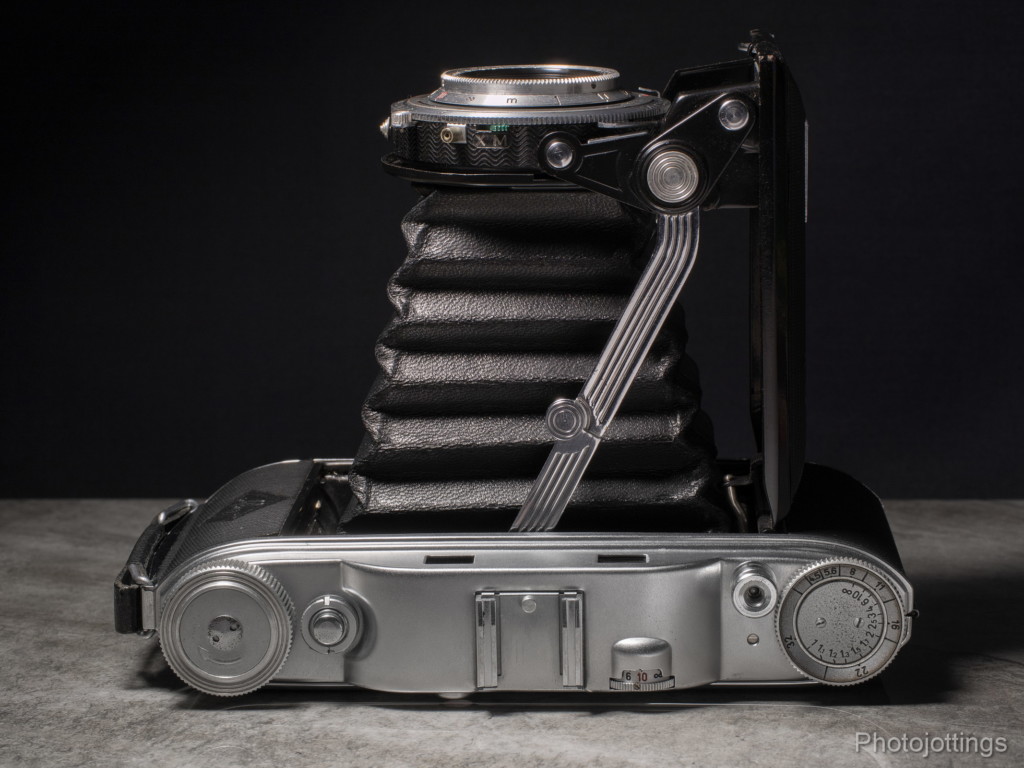 A view of the top.  From the left is the winding knob with the arrow, next is the self erecting release button for popping out the lens.

The cold shoe is for holding a flash, light meter or auxiliary viewfinder.

The milled wheel next to the cold shoe is the rangefinder indicator ring; this is where you get the distance when the two images coincide or merge; from here you take the reading and transfer it to the lens focusing ring.

On the top right we have the shutter button that is threaded for a cable remote.

Just below the shutter button is the little round double exposure indicator window.  If it’s red, the shutter is locked, and you must advance the film winder until you hear an audible ‘click’ and the red dot disappears, now the shutter is ready to operate. 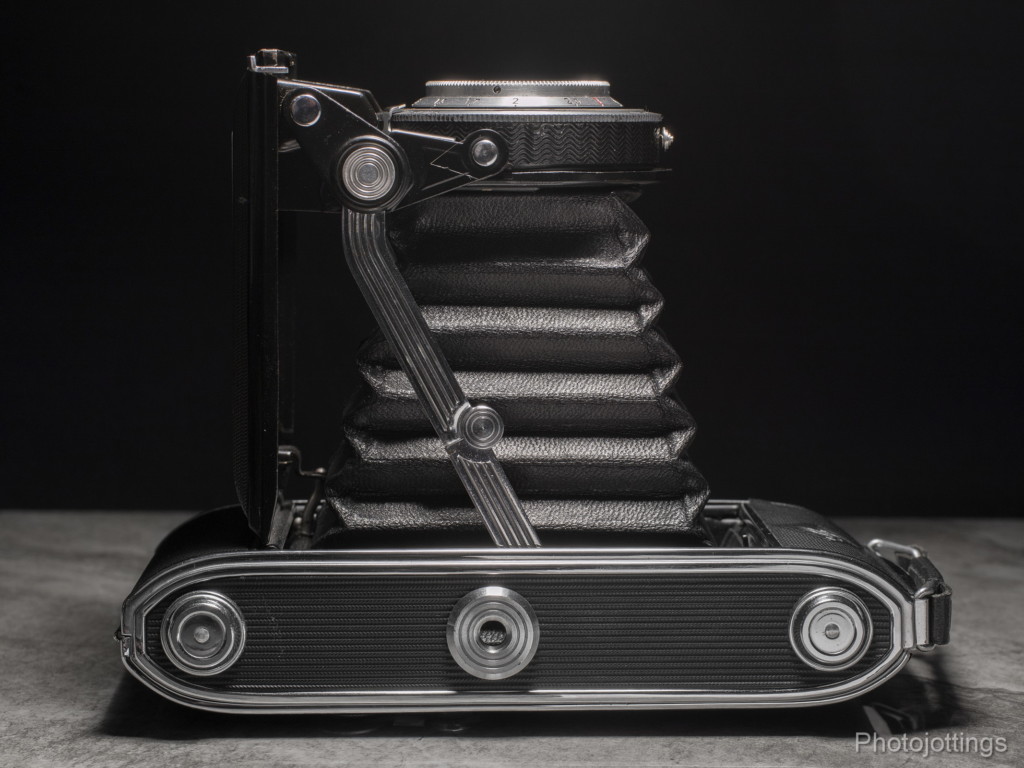 On the bottom we have the ¼-20 tripod socket.  If you’re using a small base tripod, or quick release plate, you might have to shim up the bottom to make it tight because of the protrusion of the film spool holders.  I find a couple of pieces of a paint sticks work well. 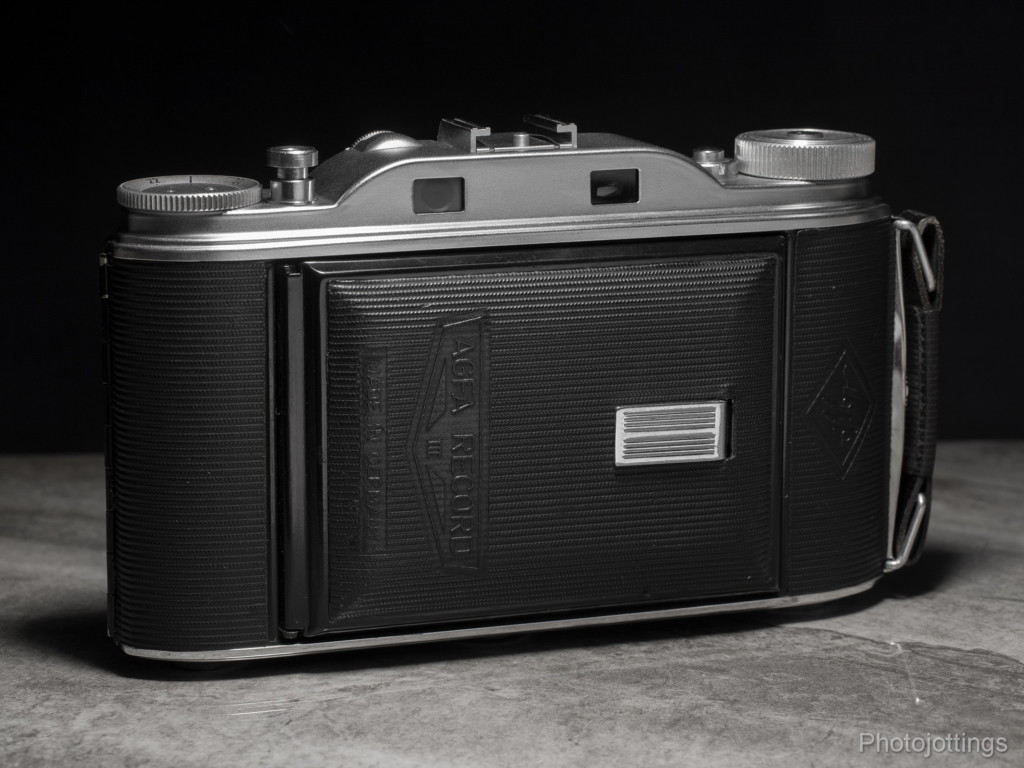 The front of the closed camera shows the chrome vertical leveling foot against the nice faux leather cover with embossed manufactures identification.

The left rectangular window is the rangefinder; it has a circle inside.  The window to the right is the viewfinder. 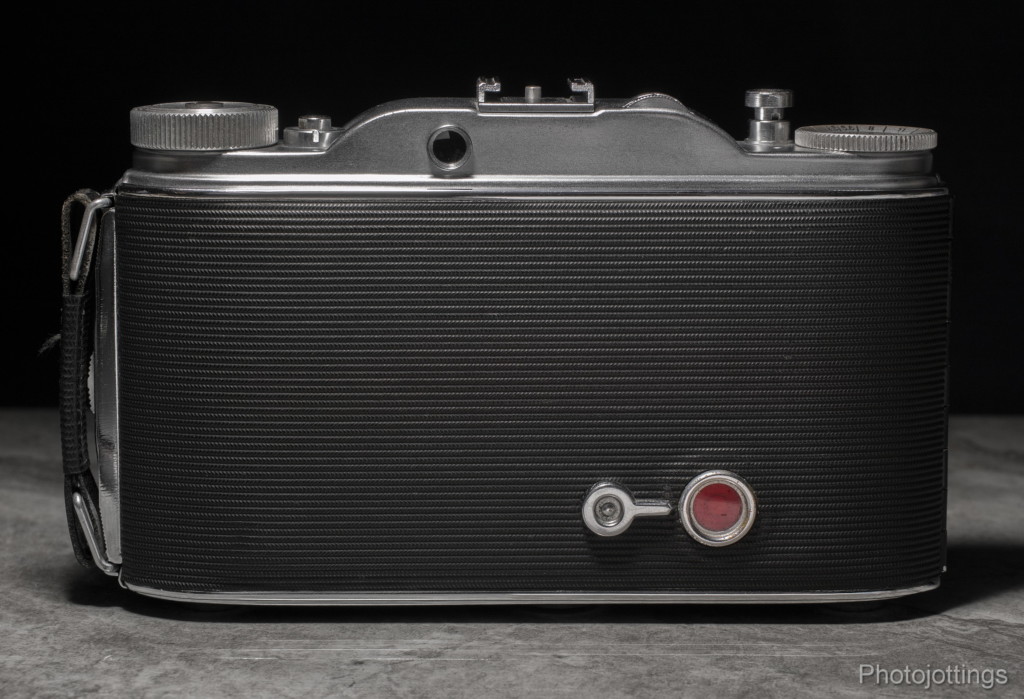 The backside is pretty spartan.  The circular viewfinder opening is quite small, but adequate for framing your shot.  The lever next to the red window operates a cover, you move the lever up to see the frame numbers on the backing paper, and spring tension keeps it closed.  The camera back is opened by the lever on the left side here, just under the leather hand strap. 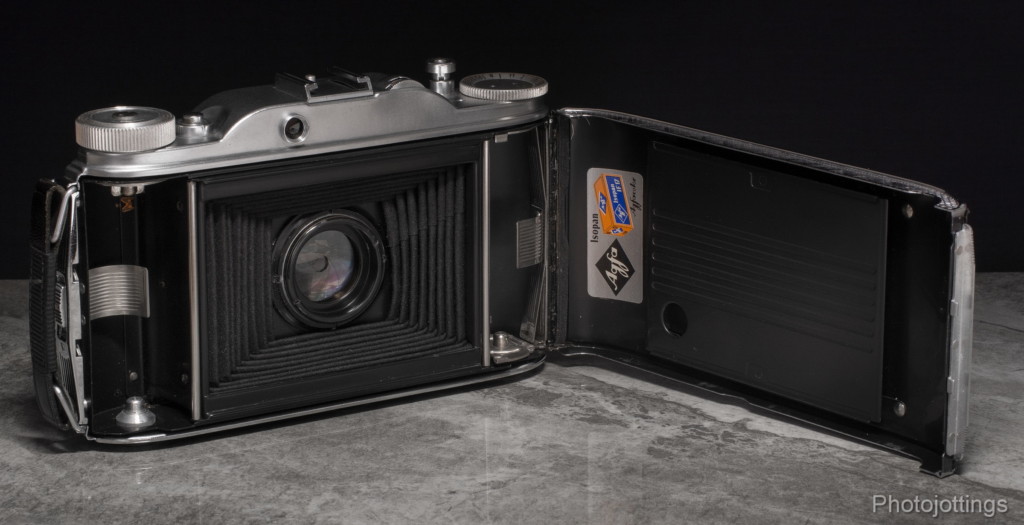 With the back cover opened we can see the lens retaining ring and aperture blades and of course the folded up bellows.  Also visible is the film pressure plate, and the Agfa film sticker recommending Isopan IF 17 B&W film (ASA 40). 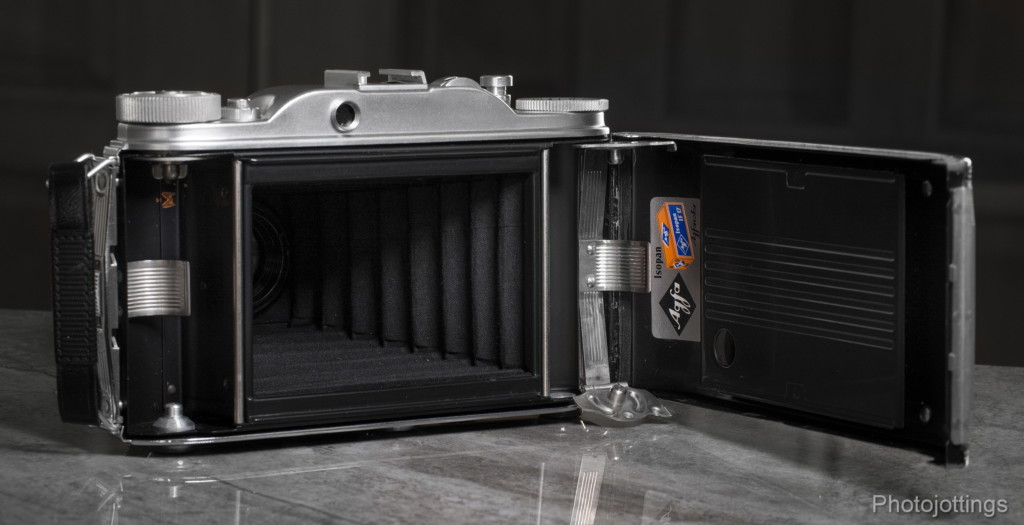 Another view of the interior, this time with the bellows extended.  The roll holder on the right, (supply side) has a nice feature where the entire holder swings out, and the bottom drops out for easier spool insertion.

The original Agfa leather case is still in good shape. 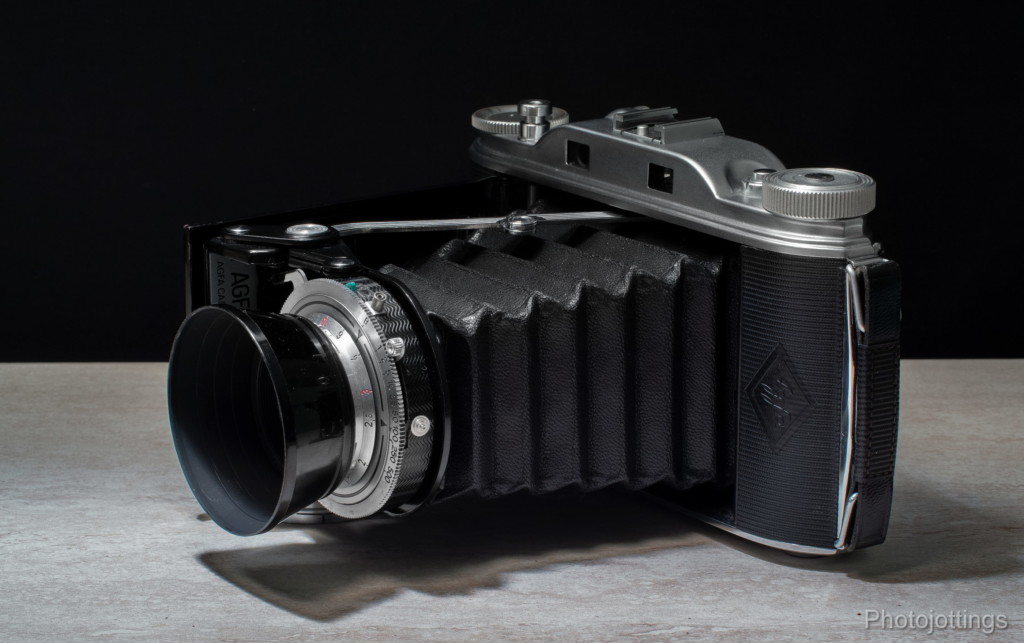 The factory plastic slip-on hood has been mounted.  Obviously, you’ll need to install it after opening the camera, it won’t fit inside when closed. 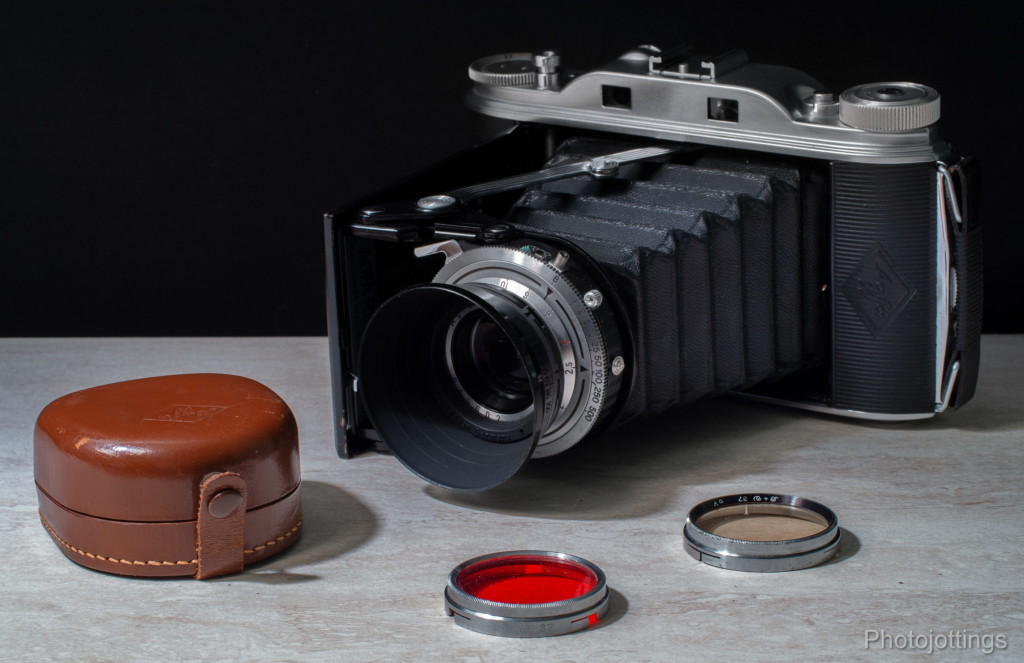 Here is the Agfa leather carrying case for the hood, and a couple of filters.  The Agfa case bottom says; 37mm, 6088, Made in Germany.  The filers pictured here are B&W 37mm slip-on type. 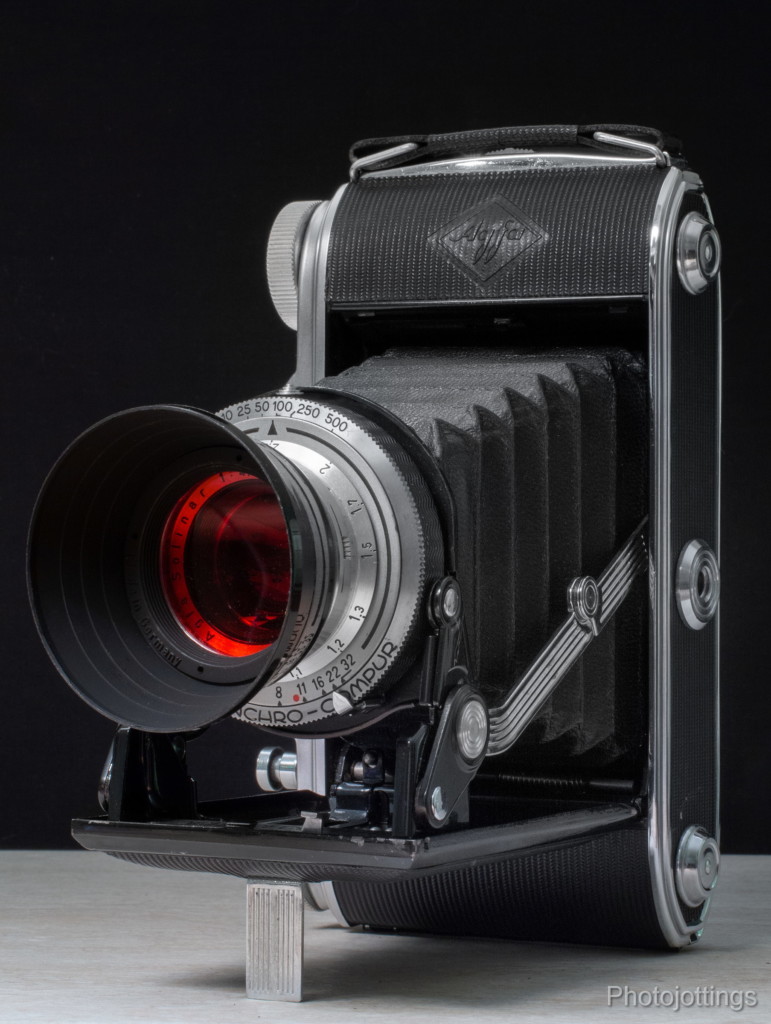 The filters and hood will stack; meaning when the filter is on the lens, the hood will mount to the outside of the filter.  You can even stack filters if you want, although I don’t know at what point you’ll start to get clipping in the picture corners. 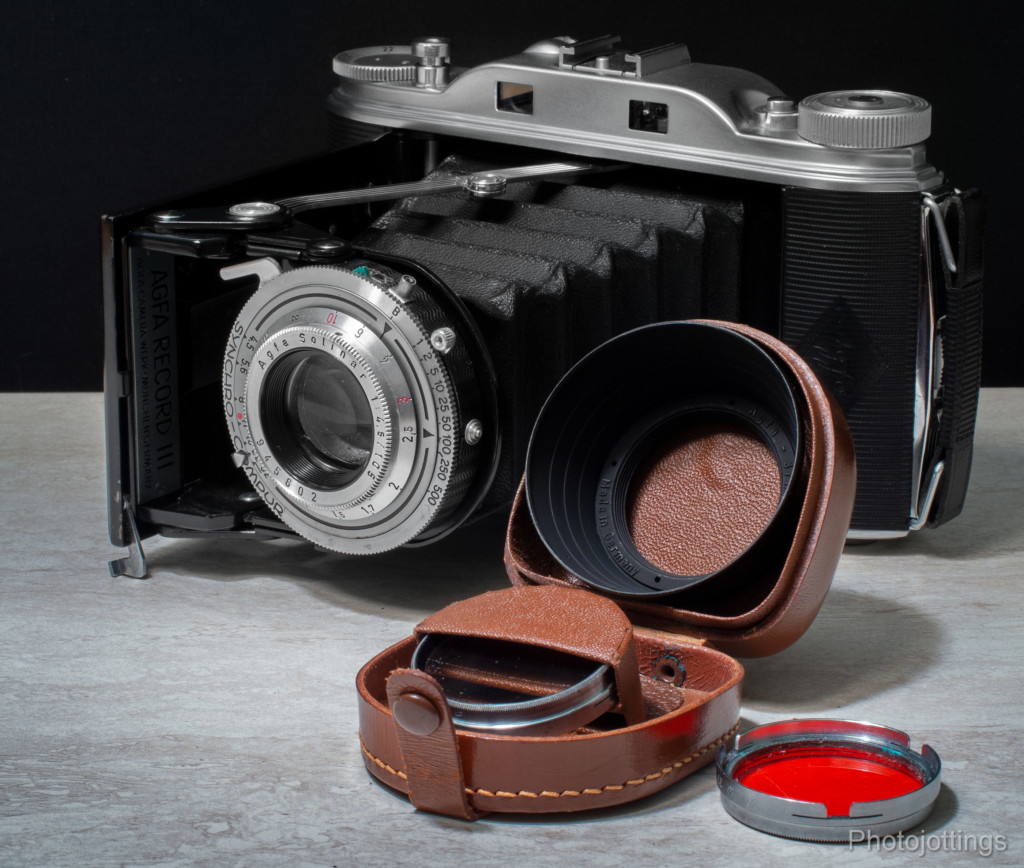 The small case will also hold a filter or two snuggled in a divided pouch in the area under the hood.  The case has a slit in the back for attaching it to the strap of the camera carrying case. 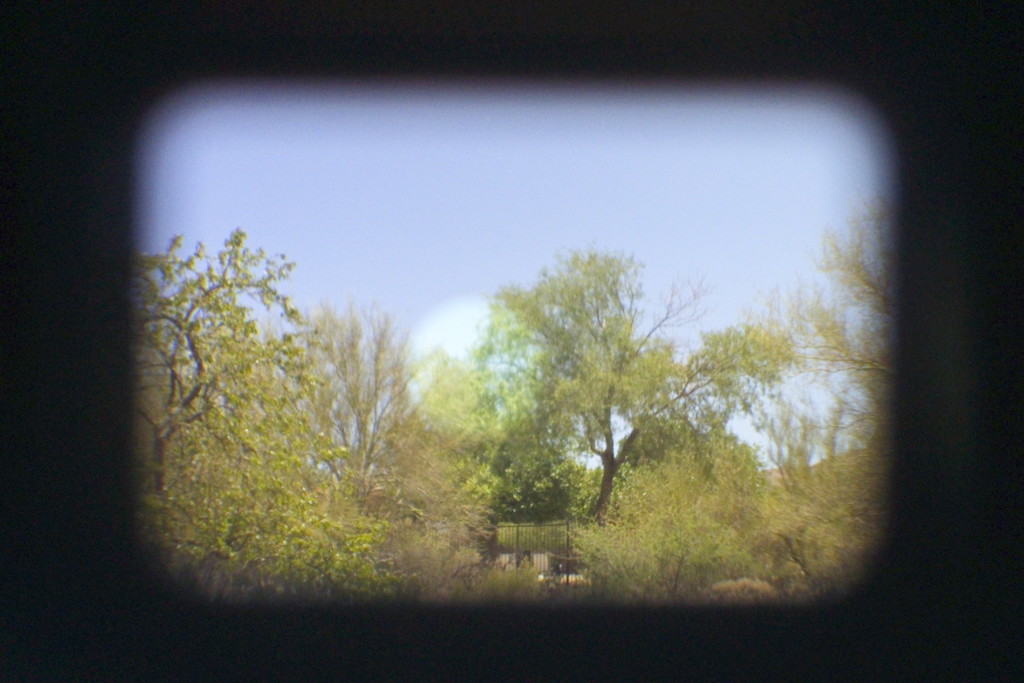 The Agfa Record III is much smaller than the Fuji GA645, but has twice the ‘negative’ size.

Here are a few samples for your viewing pleasure.  They’re about 5000-6000 pixels on the long end.  Click images for a larger version. 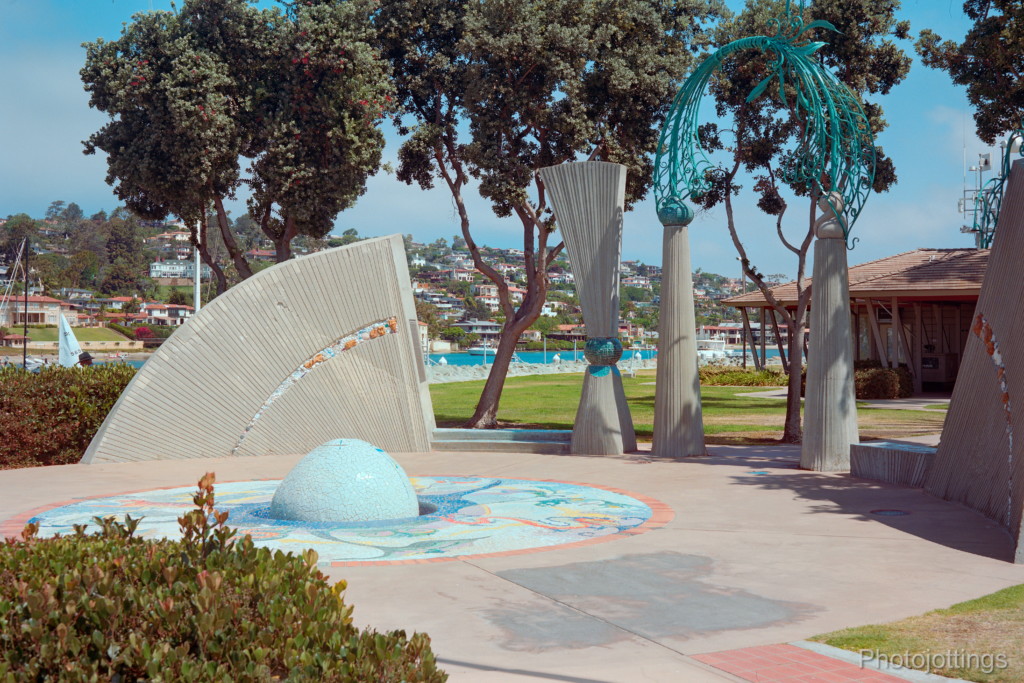 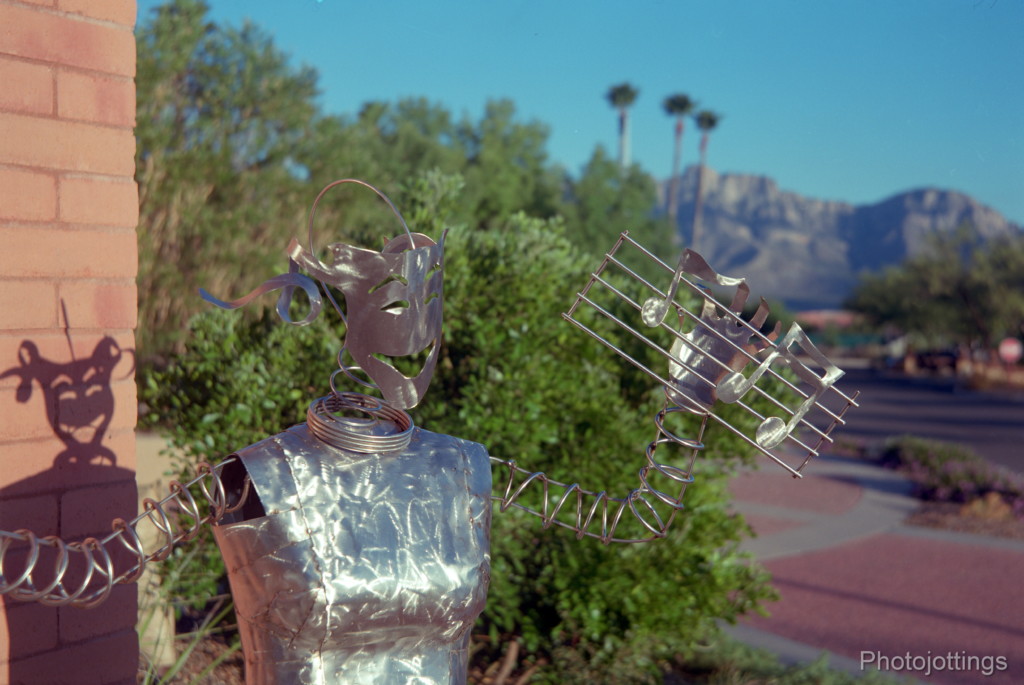 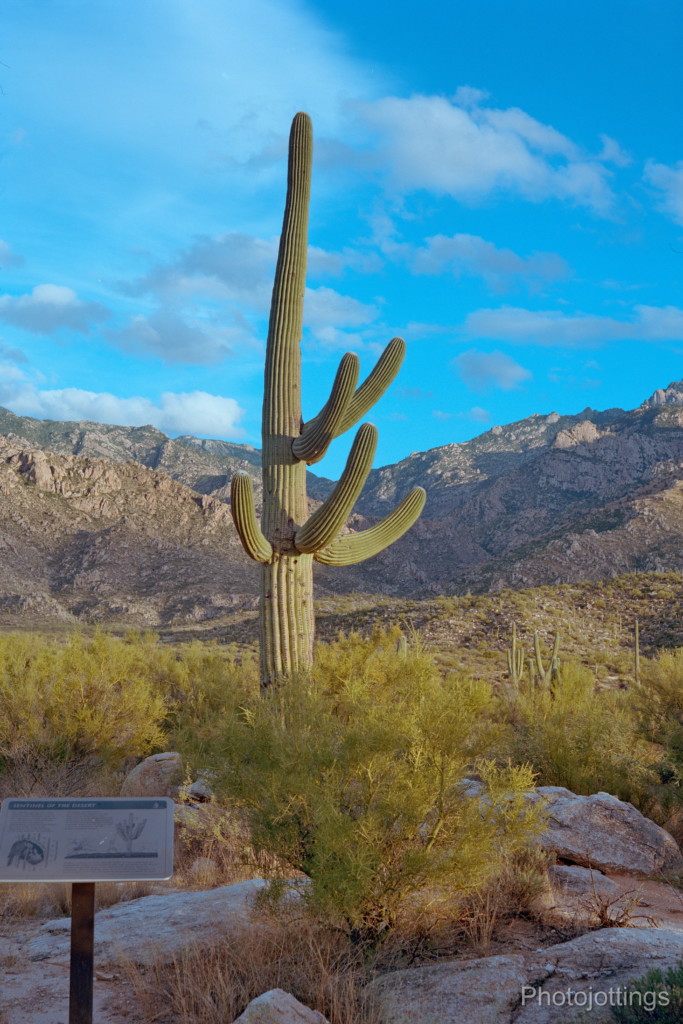 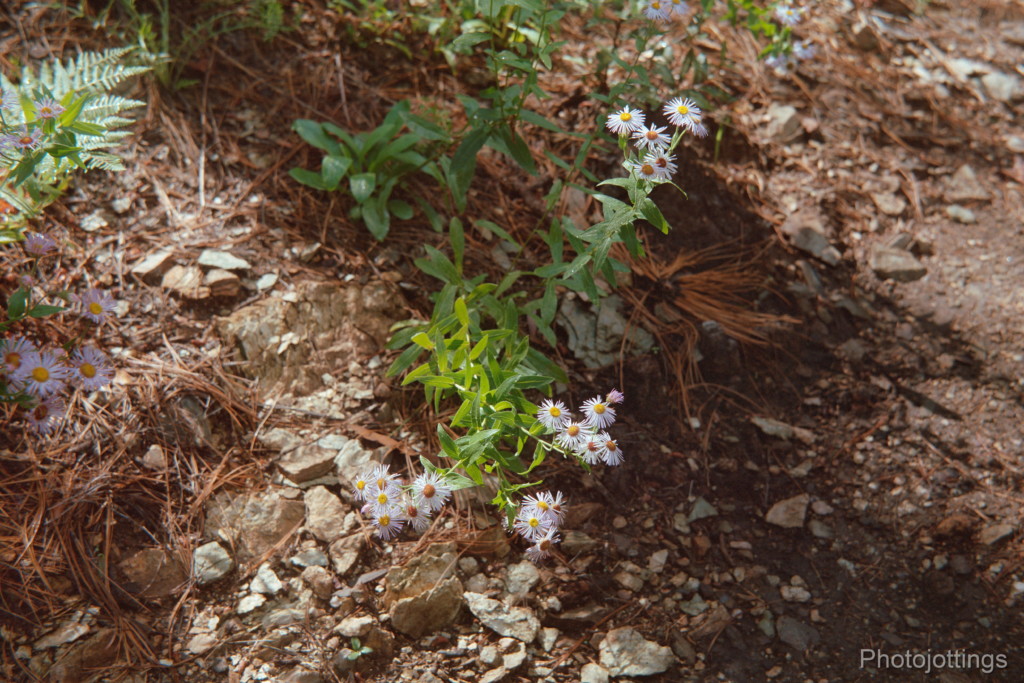 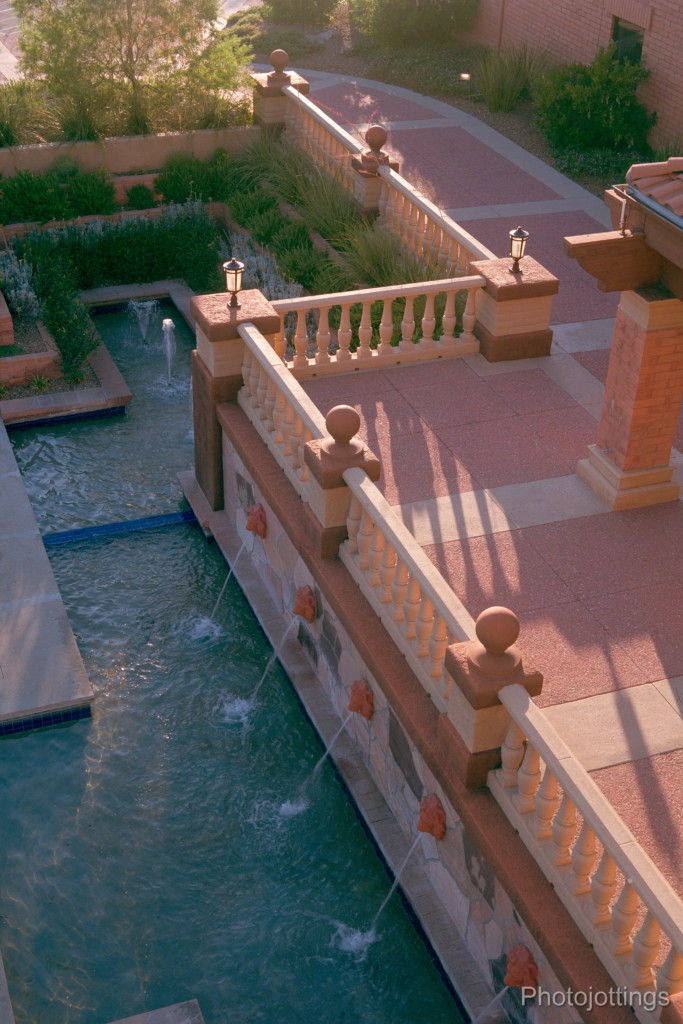 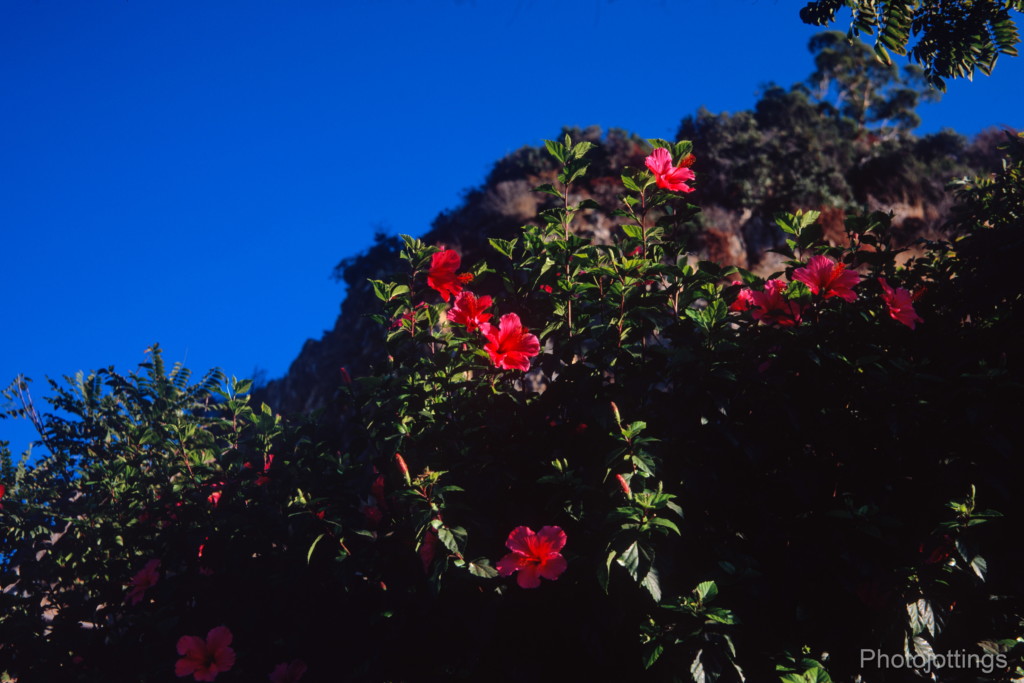 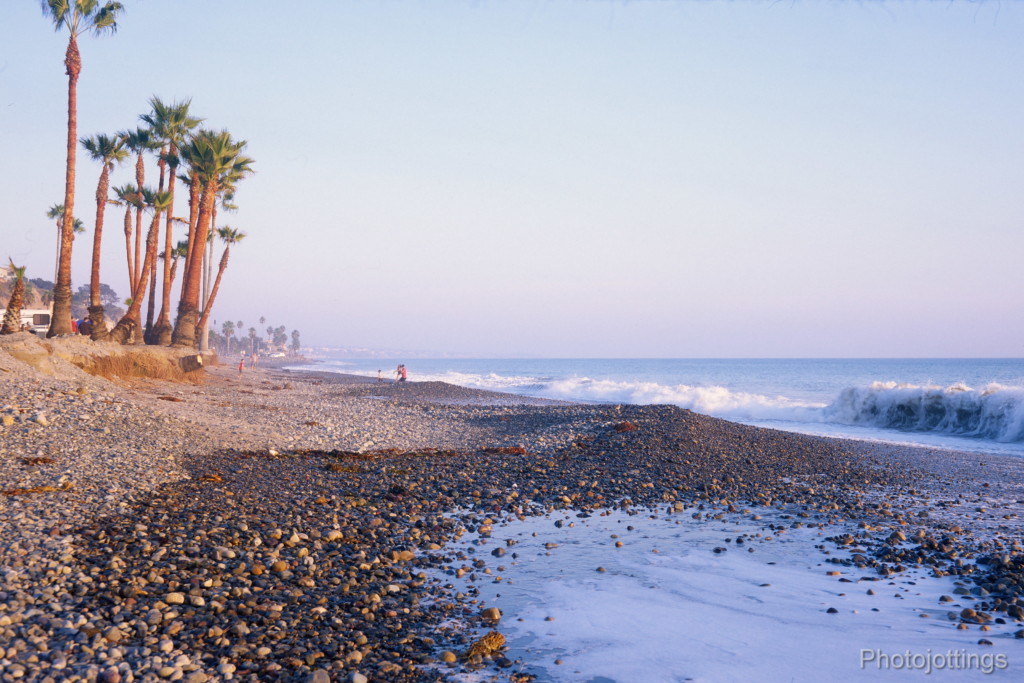 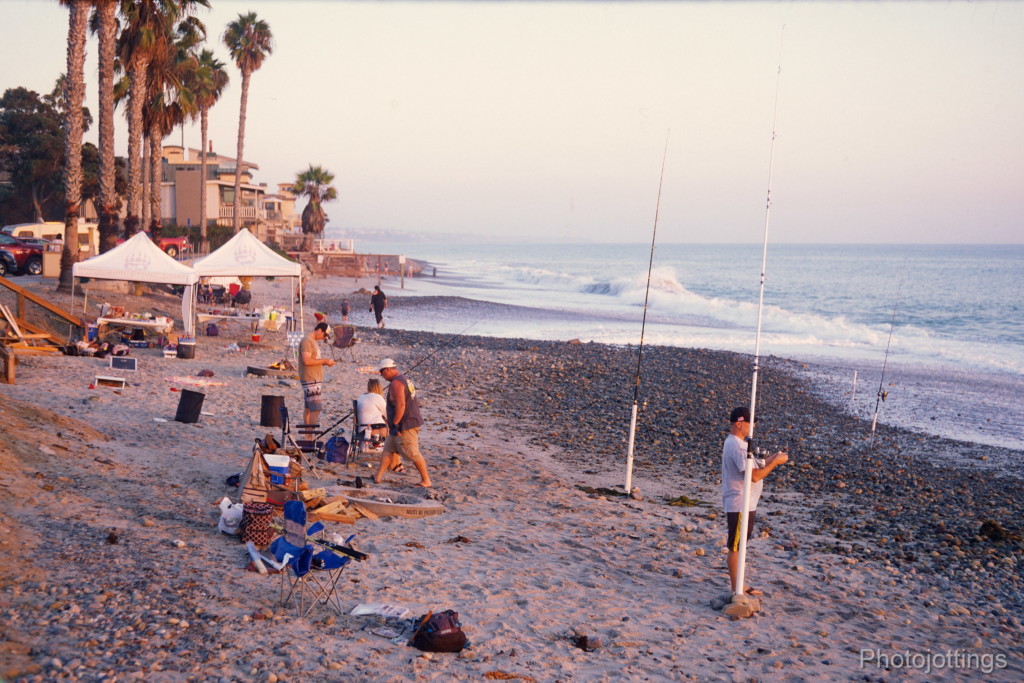 No fish, so they called Olive Garden.  F/5.6, at 1/50s.  Limited depth of field here and focused on the fire pit.  Very sharp in the central part of the picture, and totally usable at this aperture.  Fuji Provia 400X. 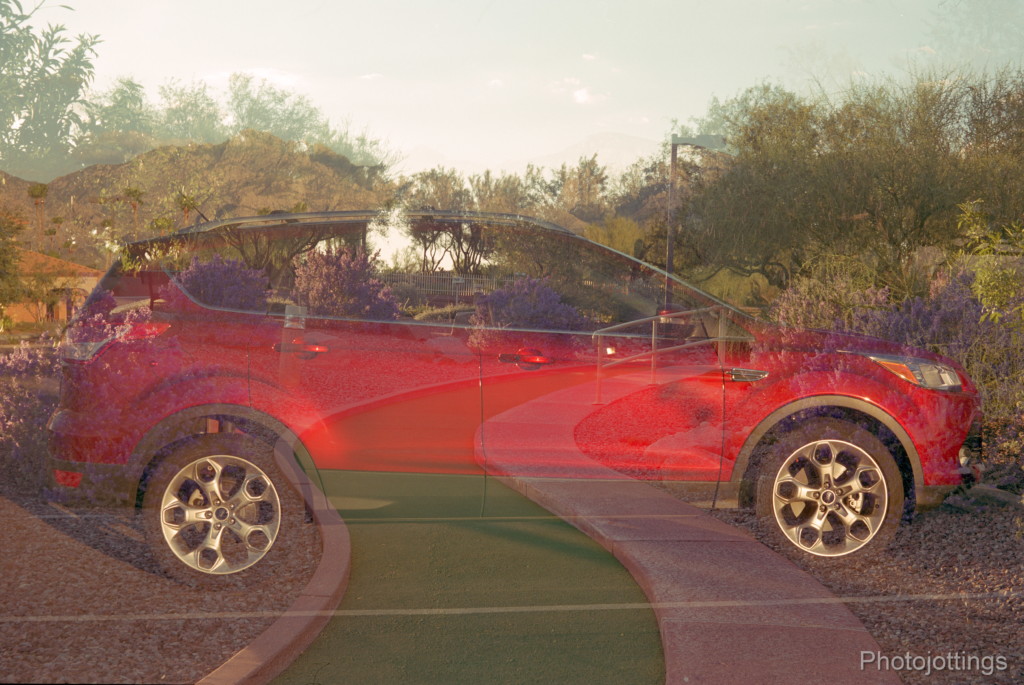 Here’s what you get when you don’t continue pressing the shutter button all the way down after the shutter fires; a double exposure.  Either really neat, or two wasted pictures out of 8. 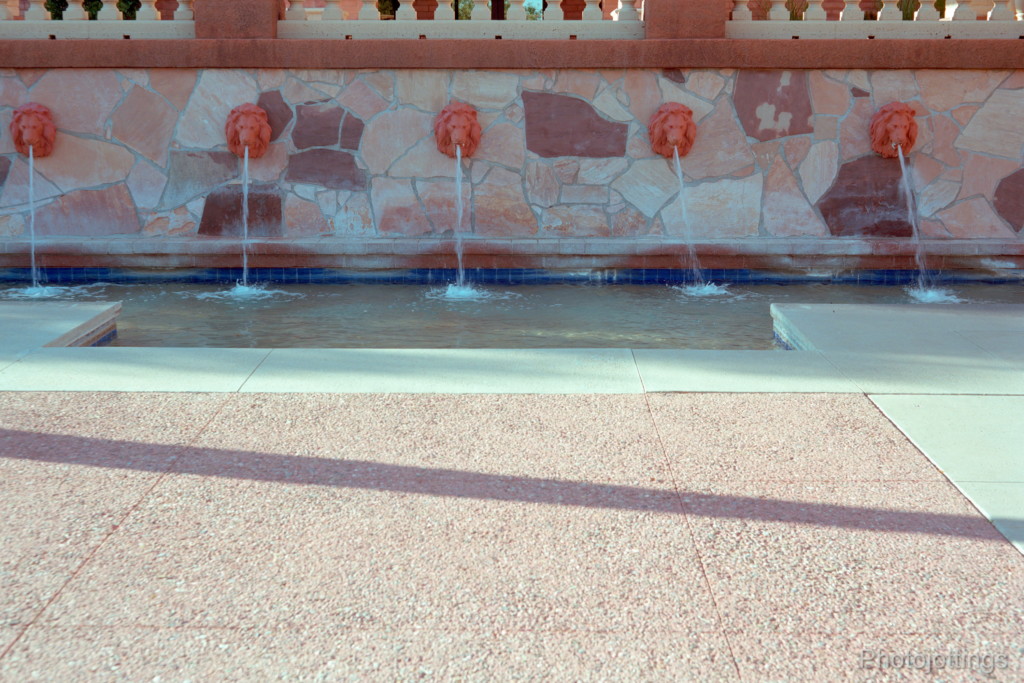 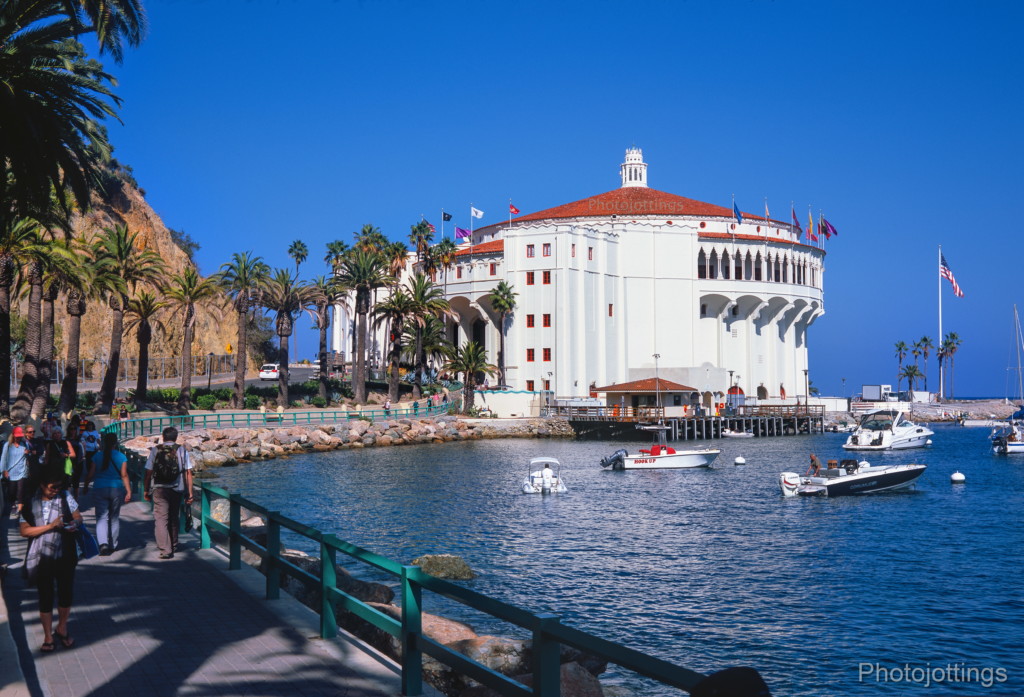 All test shots are displayed at 6000 x 4000 pixels wide when enlarged, and that’s all the resolution included in the film.  Scanned on a Nikon Coolscan 9000 ED.

Here is our standard Mountain test scene, this time using Kodak Ektar 100 film.  A tripod was used, but no filters.  Click to enlarge. 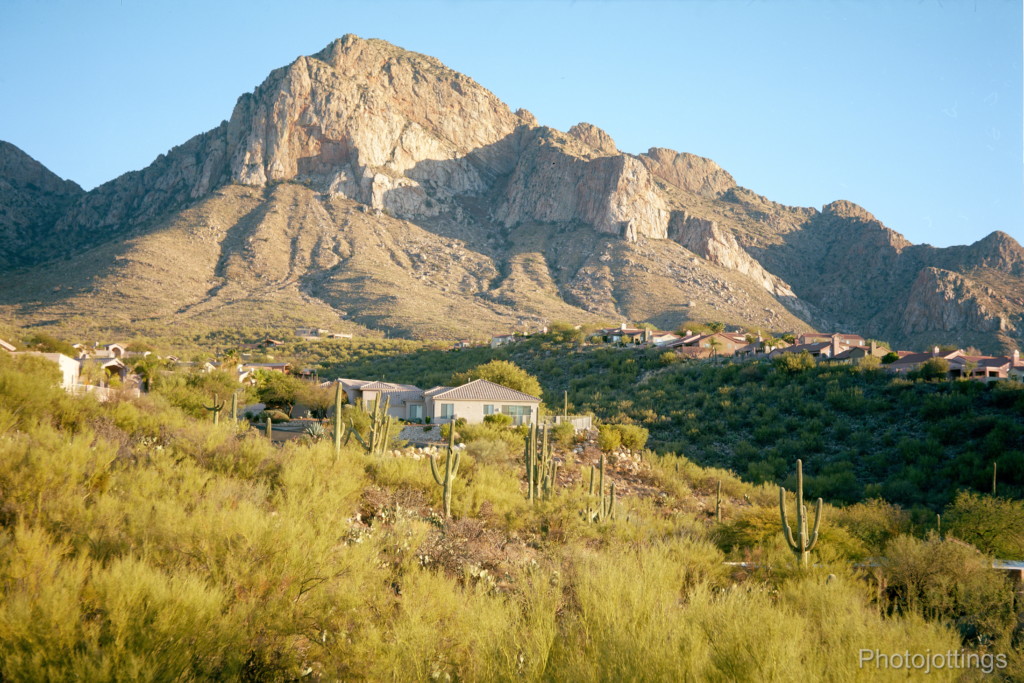 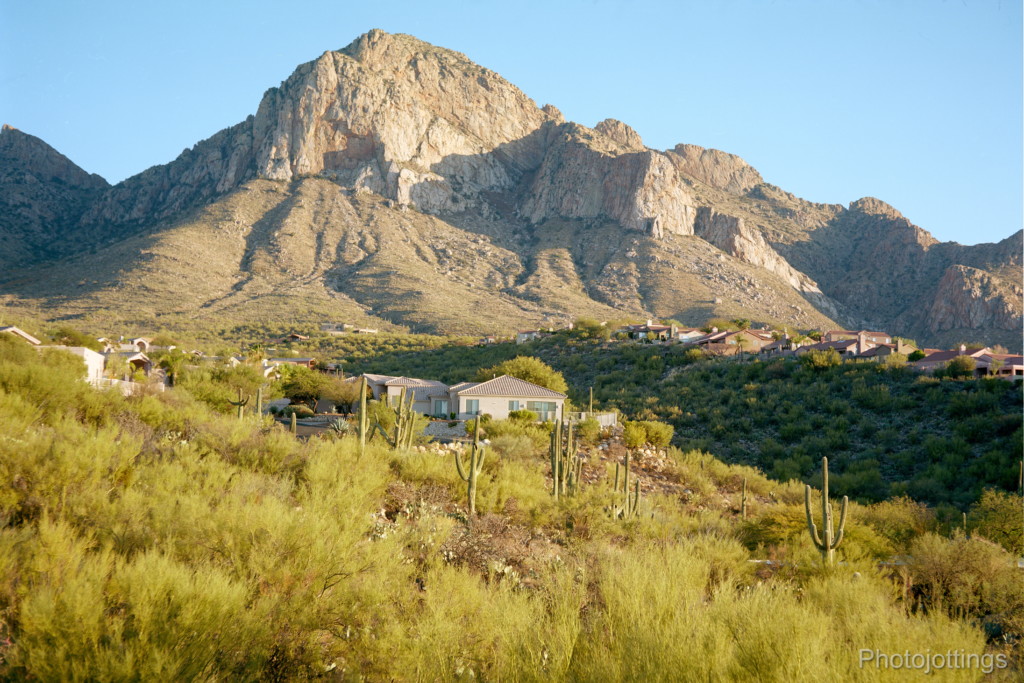 F/5.6, a slight bump in sharpness in the central area. 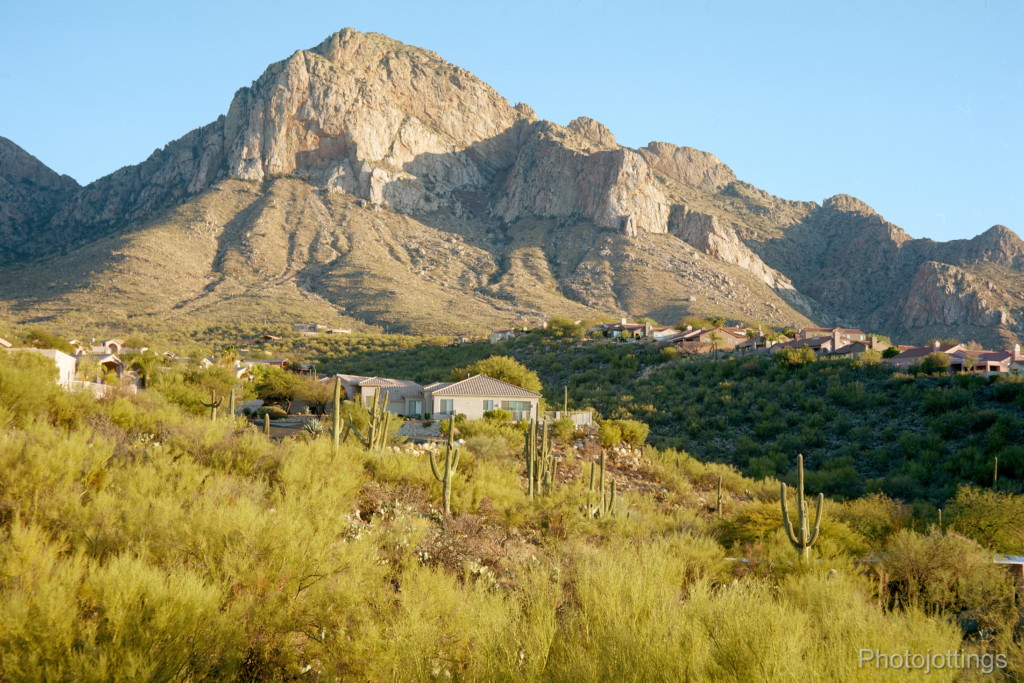 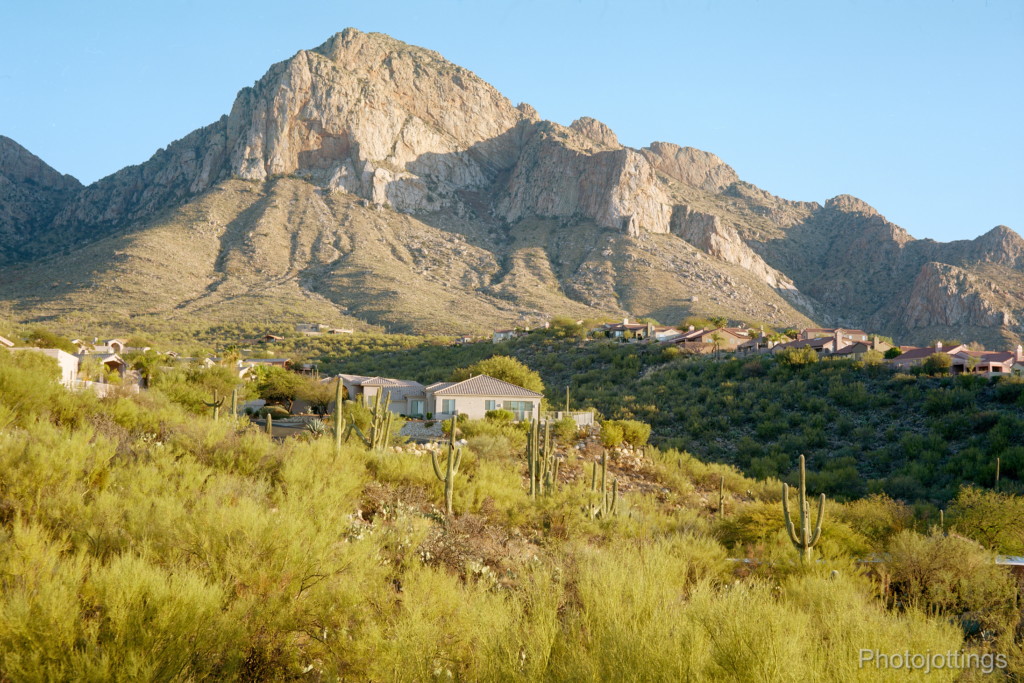 F/11.  The whole image get noticeably sharper, especially along the sides. 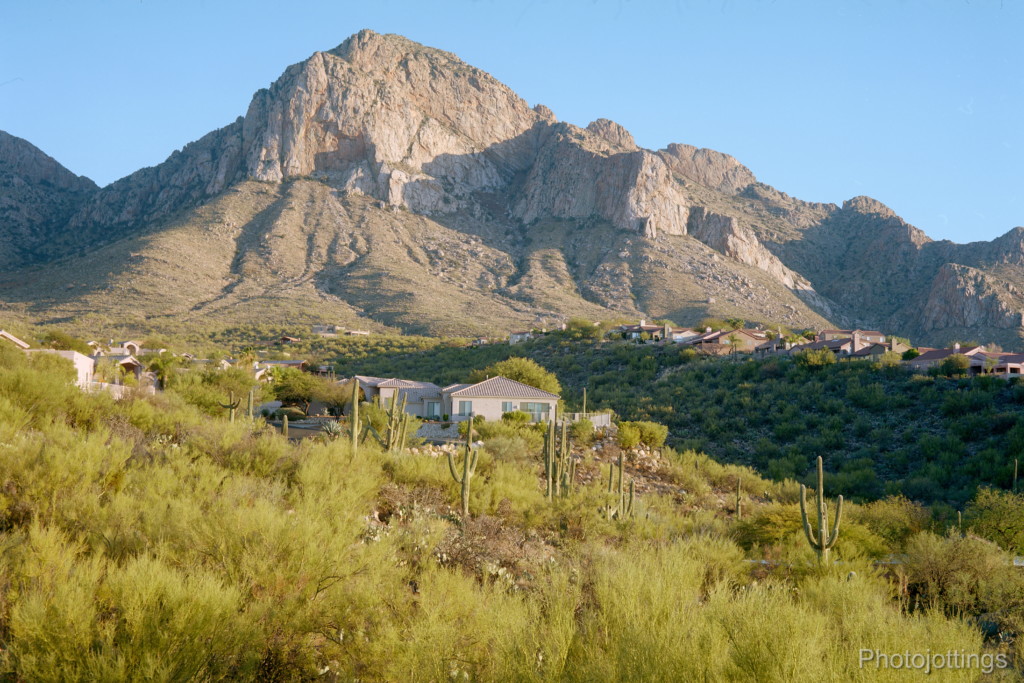 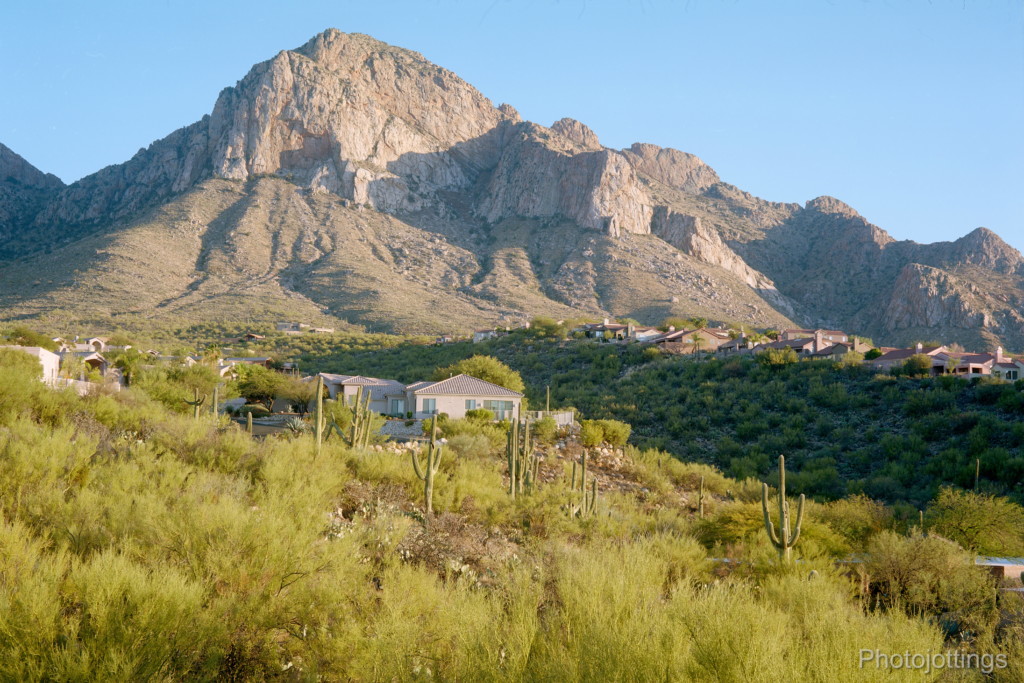 F/22.  Another increase in sharpness from F/16.  F/22 is the best aperture for landscape shooting, the whole image is very sharp here, even along the sides. Diffraction creeps in at F/32 (not shown).

The Agfa Record III is actually just an average 1950s folder on the outside; with front cell focusing, uncoupled rangefinder and pedestrian looks.  The more expensive models of the time like the Zeiss Super Ikontas, and Voightländer Bessas most often had faster lenses, coupled rangefinders and unit focusing like view cameras.  However, what the little Agfa Record III lacks in features is made up with what appears to be a nearly perfect lens and rangefinder system; both seem like they would probably exceed the factory average specifications.  Again, as I said in the introduction, this Agfa Record III appears to produce an overall slightly sharper image than my many other four element Tessar and five element Heliar folders at stopped down apertures.  I’ll post some comparisons in the near future, after I’ve reviewed those cameras.

If you’ve read the whole review, you know now why I like the camera so much.  It gives far more resolution than any ’35mm’ camera, (including the most outrageously expensive Leicas), along with very smooth images as a result of the big negative size.  It’s also about the same size as a typical fixed lens 35mm camera, so why bother carrying around something that produces technically inferior pictures, right?

Even though this camera seems almost perfectly set up, my other folders from the same period produce great results too, and are just as good as the Agfa if you aren’t interested in the very sharpest poster size prints.  In all honesty, I rarely print larger than 8″x 10,” so the extra resolution gets wasted, but the images printed at that size are super smooth and sharp!!

So it’s two thumbs up for the Agfa Record III.