Hop aboard the time travel train and let’s head to Palm City California for a brief visit—in 1938!  Will you join us in Cocktails at our home?

I purchased this group of 18 Kodak nitrate negatives via ebay, mostly 8×10″ size, along with a nice paper invitation for Cocktails after an ‘Ad Club party’ at the San Deigo Country Club.  No year is given, but the date, (Saturday, February 19th) gives us a pretty good clue to the actual year.  According to online sources, the home was built in 1929, and the Cavell’s sold it and moved on in 1939, so 1938 is the only year between those dates that Saturday the 19th in February occurs.

A little history on Ray Cavell: Ray and partner Laurence Klauber were holders of an electrical patent in 1916 for ‘current distributing apparatus’ according to an ‘Electrical World review publication’  and assigned it to San Diego Consolidated Gas and Electric the same year.  I’m guessing this is where Ray made his fortune.  Earlier in life Ray contributed a plan to a 1911 Popular Mechanics Magazine for a quick and easy ‘pen holder’ for holding a ‘beam compass point.’  So It seems Ray was a pretty clever guy.

The beautiful two story Spanish Colonial called ‘Rancho Las Palmas’ is located about 12 miles south of San Diego, California.  According to online records the current property is about five acres, with the home being approximately 9000sf.  However, it looks like that number may be a combination of three different houses on the property, so I’d guess the main home in the pictures below was half that size.  Amazingly, the house and larger outbuildings as pictured in 1938 are still there, skip to the bottom to see!  I’m surprised the place wasn’t torn down and replace with a bunch of inexpensive houses as is the case surrounding the property now.

Unfortunately, I don’t have any information about how these images came to be, so the next best thing would be to do a bit of guess work.  Since they appear to be take by an amateur, (crooked, missed focus, poor compositions, and developing issues), I’m thinking maybe Ray Cavell the homeowner took these himself.  Obviously he had enough money to hire a Professional Photographer, but maybe he didn’t want anyone lurking about the property all day waiting for those decisive moments, especially with the wife and daughter around.  Maybe Ray Cavell already had a basic 5 x 7″ camera, but after reading some photography related magazines of the day he decided to move up to some ‘professional’ equipment and bought an 8×10″ view camera for some official documentation of his Ranch.

As far as exactly when the images were taken, I can only guess that these were made as the Cavell’s were getting ready to sell, and wanted some memories to take with them.  The house sold in 1939, so these pictures were probably taken either in 1938 around the time of the Cocktail gathering, (that’s why the paper invitation is included in the folder with negatives), or possibly just before they moved out.

The scanned (Epson V700) negatives below show the entire area of the image, nothing has been cropped inside from the holder marks.  Many of the negatives have issues from either improper developing or more likely nitrate negative degradation. The pictures are presented at 3000 pixels wide; there is more resolution in the negatives, but I choose to limit the size so they would be more mobile friendly.  Most are 8×10″ Kodak Nitrate Negatives unless otherwise noted. 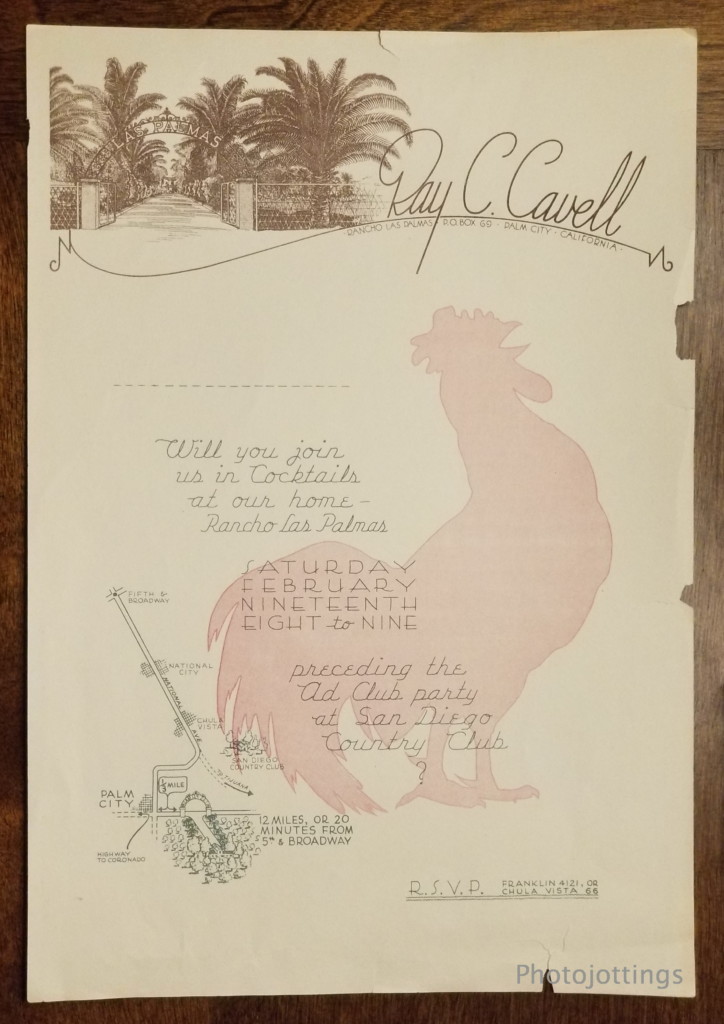 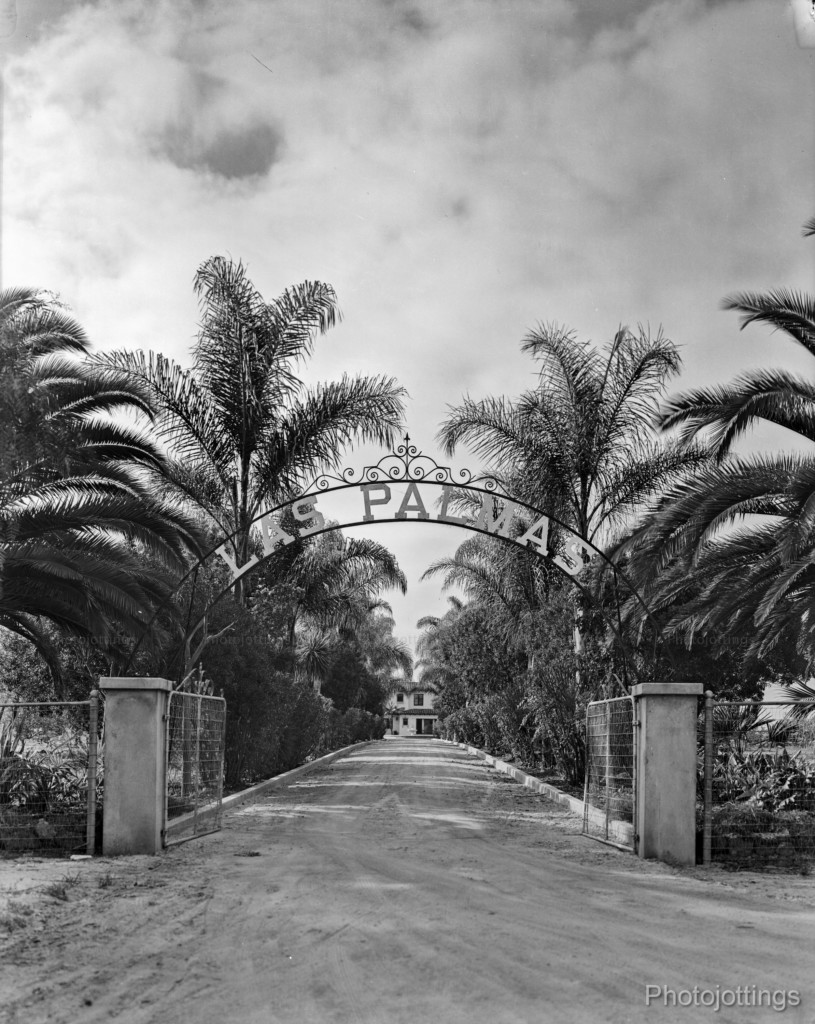 Looking south to the entrance from Palm ave.  Dirt entrance with curbs seems to show a home under construction, but mature landscaping suggests it was taken near the end of their time here. 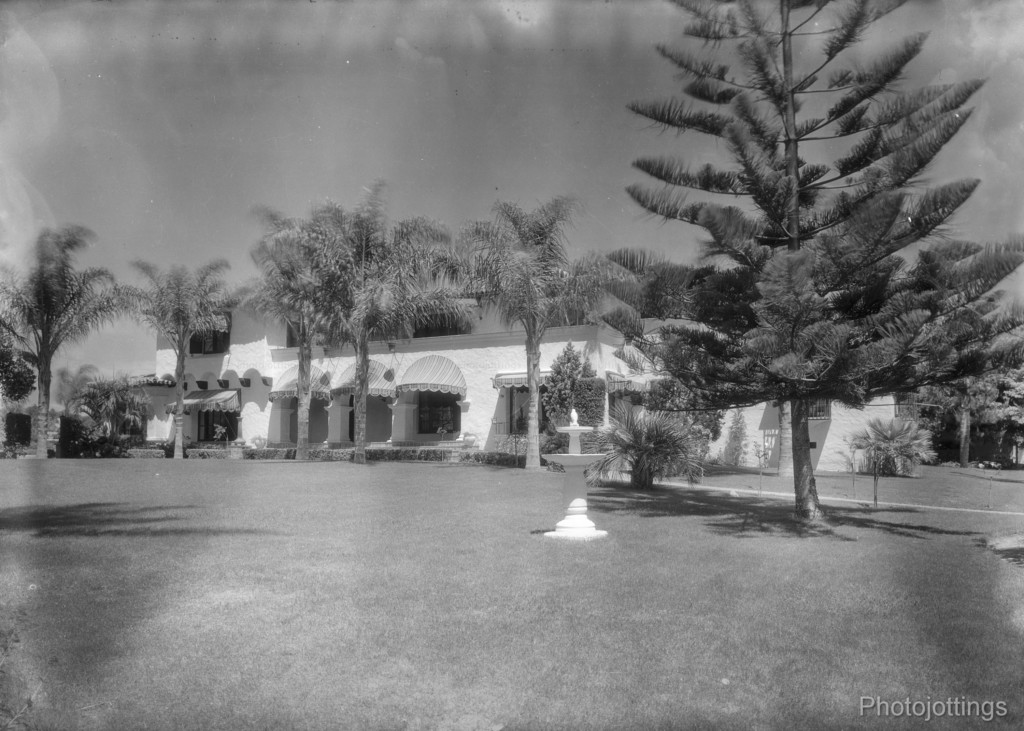 This scene is the west side of the home, using a wide angle lens of around 125mm.  Locally common non-native (Norfolk Island) Star Pine on right.  From a 5×7″ Kodak negative. 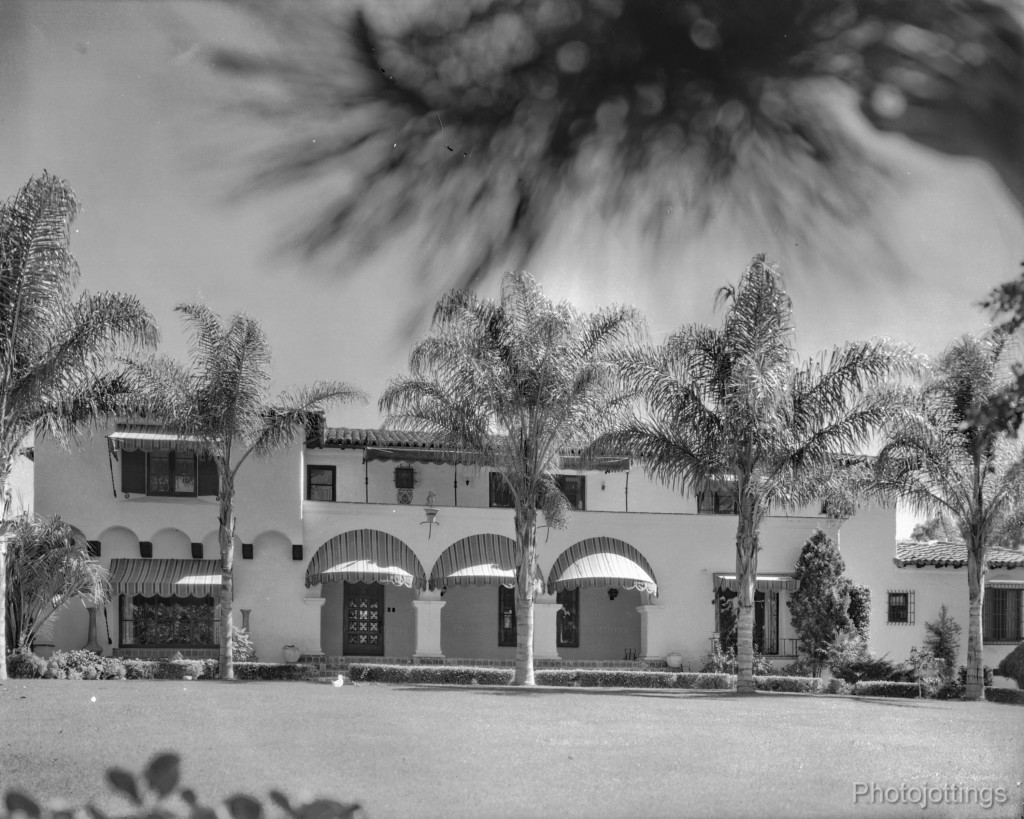 Odd composition here, and not a fan of the foliage in the sky; it’s also crooked; but a cool duck has landed on the lawn to keep our eye from those distractions. 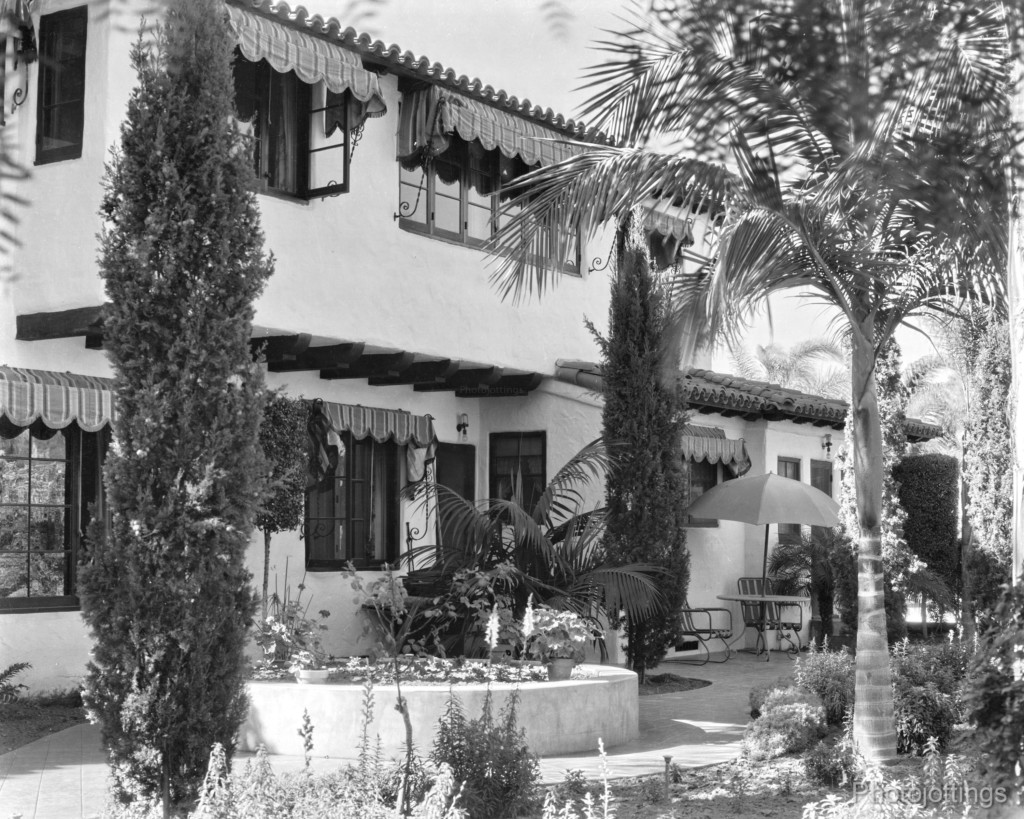 A decent shot here probably using a wide angle lens of around 150mm.  I have a chair almost identical to the two metal strap chairs on the right under the umbrella.  Nice twisted ironwork bracing the fabric awnings.  East or North end of the home. 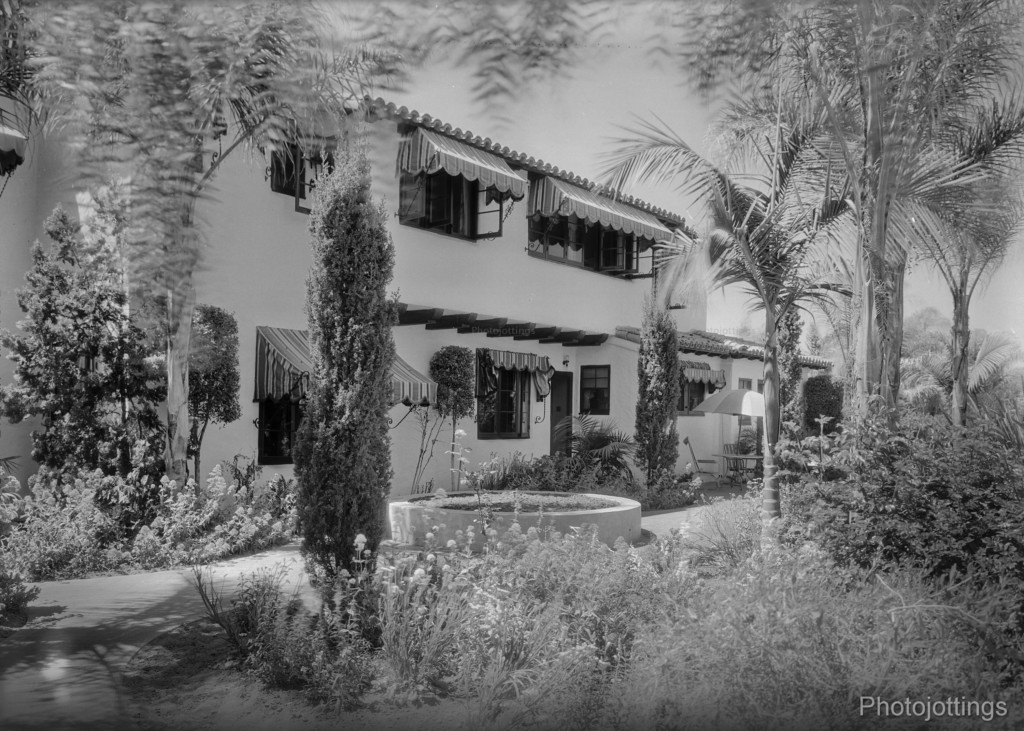 The east or North end of the home.  A wide angle 5×7″ version from the shot above. I like this composition, however, the moving foliage is very distracting, maybe it was windy.  Using the sunny 16 rule, the settings for this shot are probably around F/32, 1/8 second. 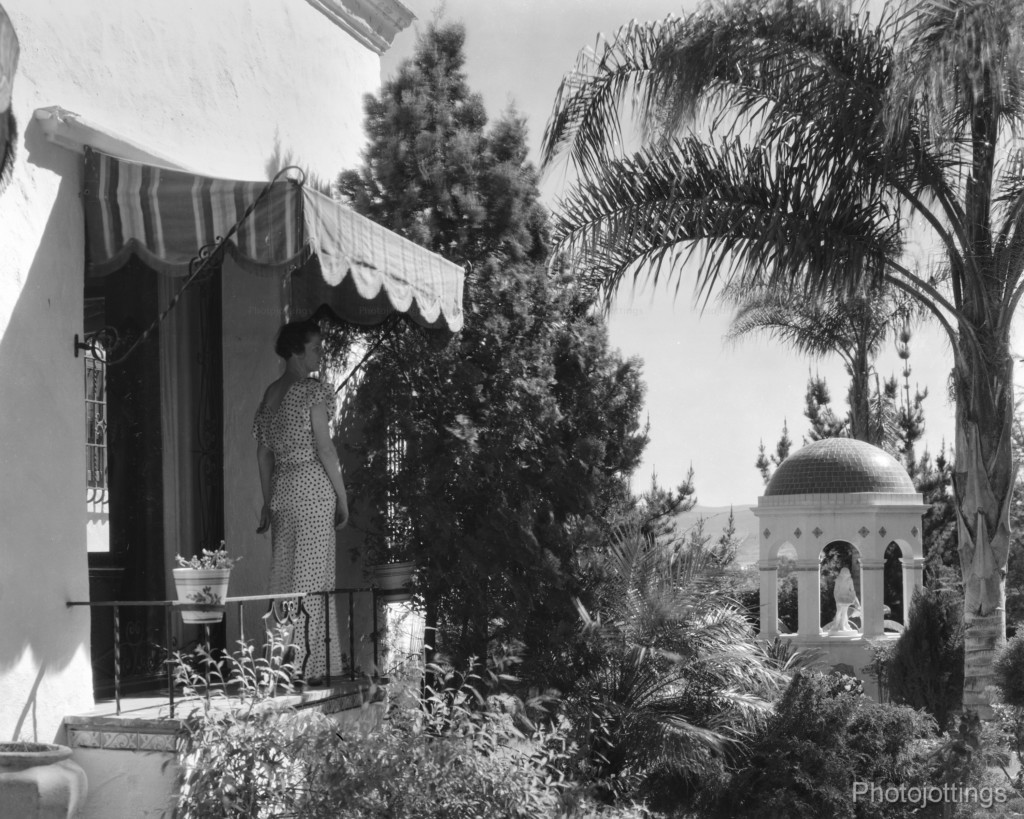 My favorite from the series, and this may be Ray’s wife Myrle; she’d be about 38 here, and apparently was a Real Estate agent for 60 years, and lived to be about 105!  Looks like a ‘normal’ lens of 300mm using an 8×10″ camera.  Background Mountains are in Mexico. 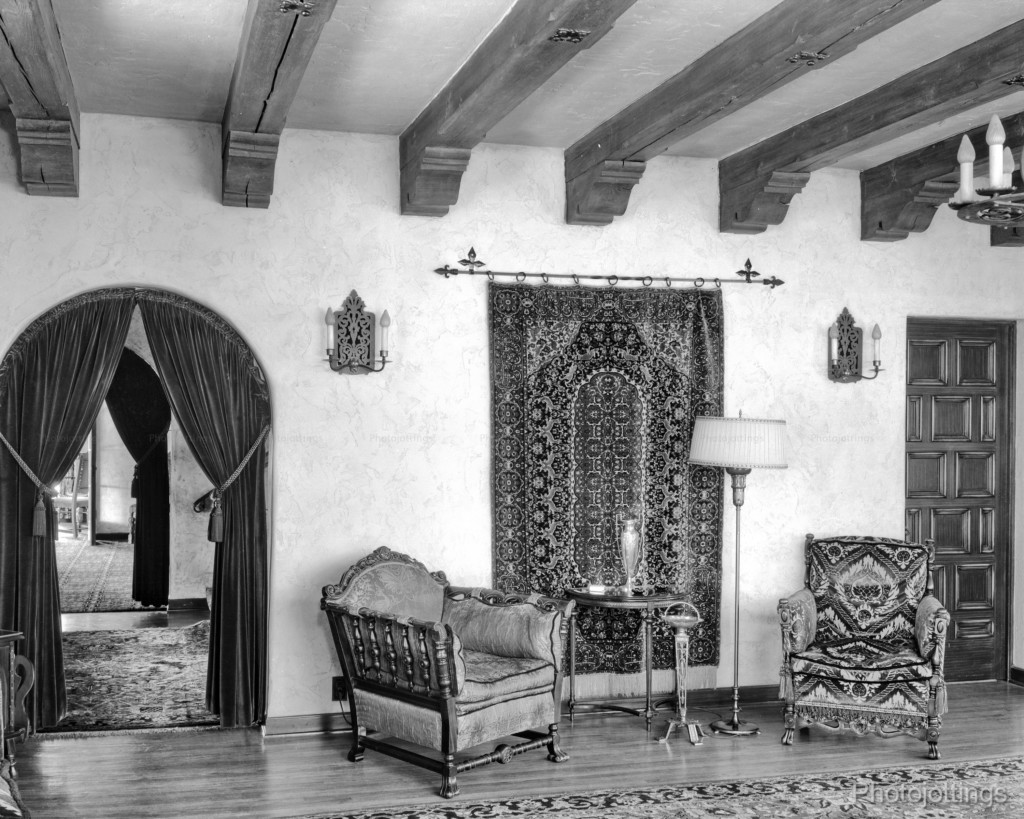 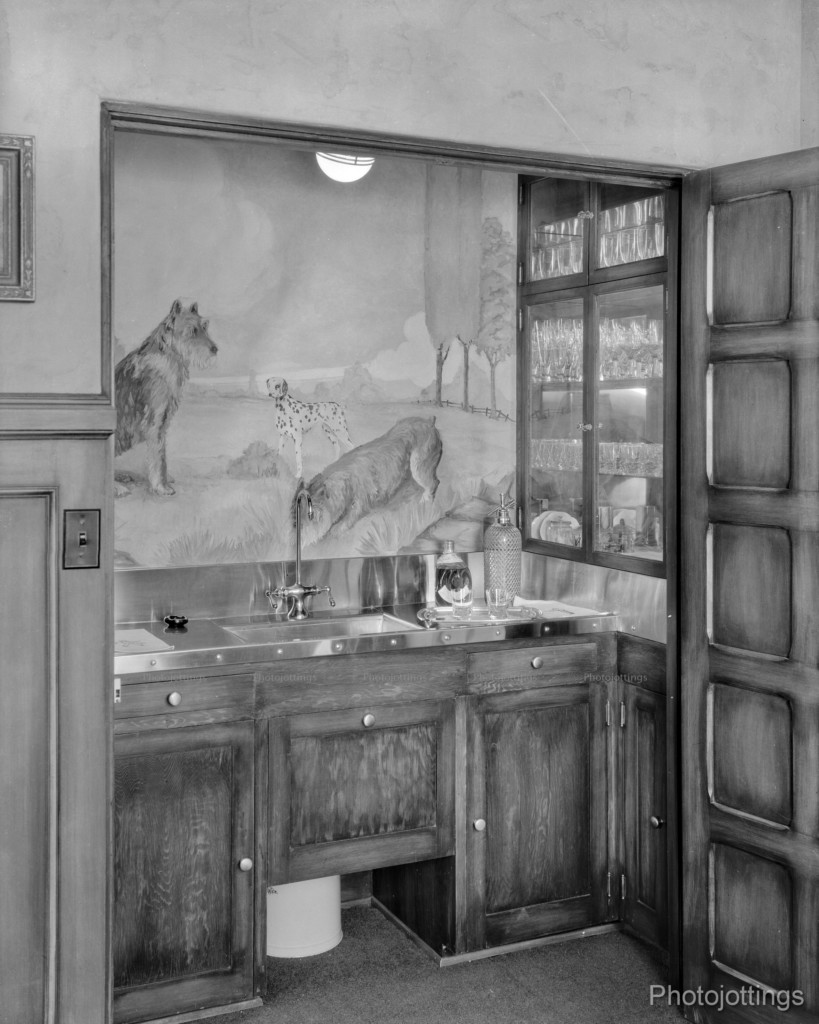 Don’t be vague, ask for Haig!  The bar with what could be a mural of the family pets. 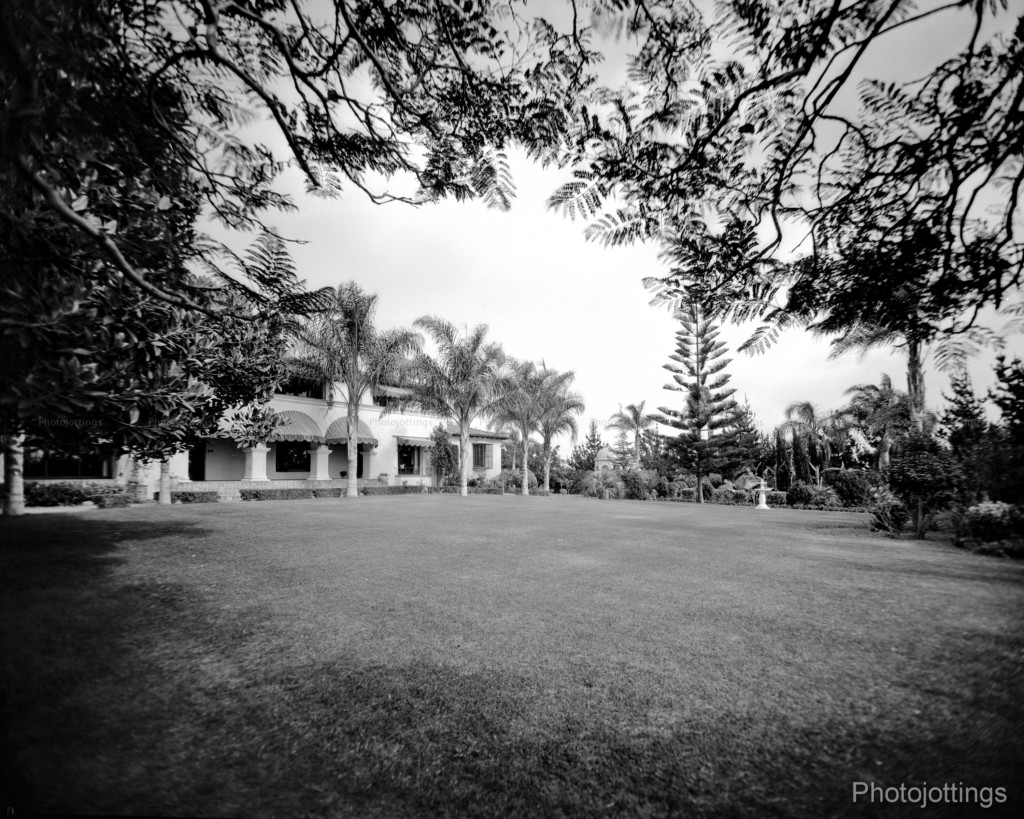 Another shot of the west lawn.  This composition doesn’t work for me, half the entire image is the uninteresting bare lawn. 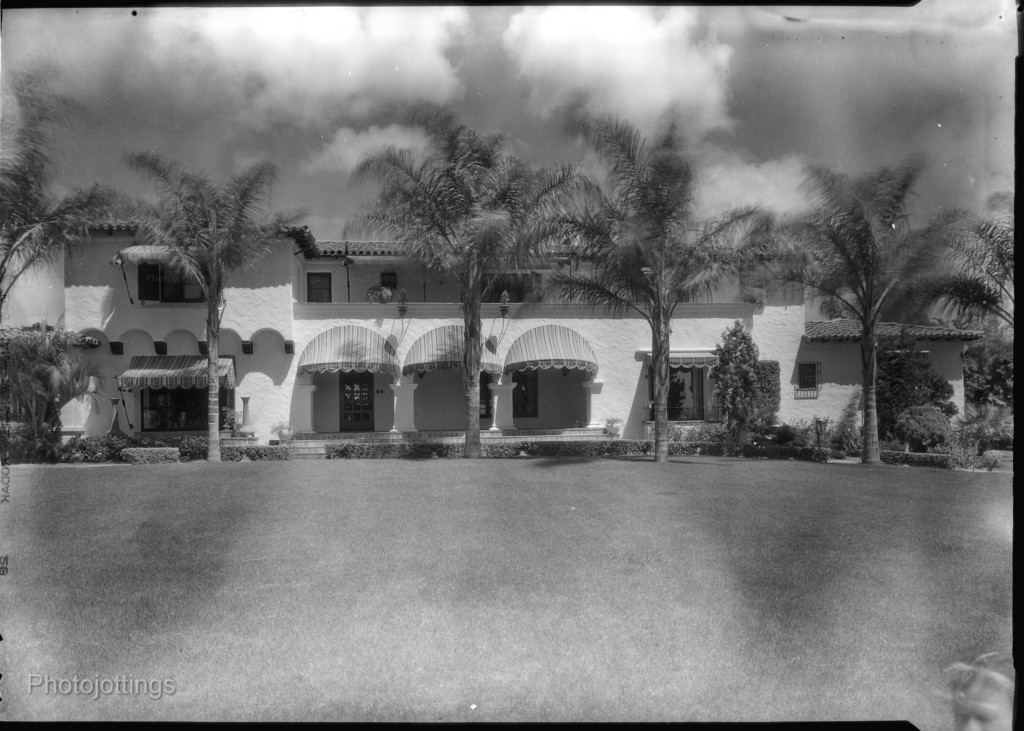 Here I included the margins to show the little photo bomber in the right lower corner, this may be the daughter Sallie. 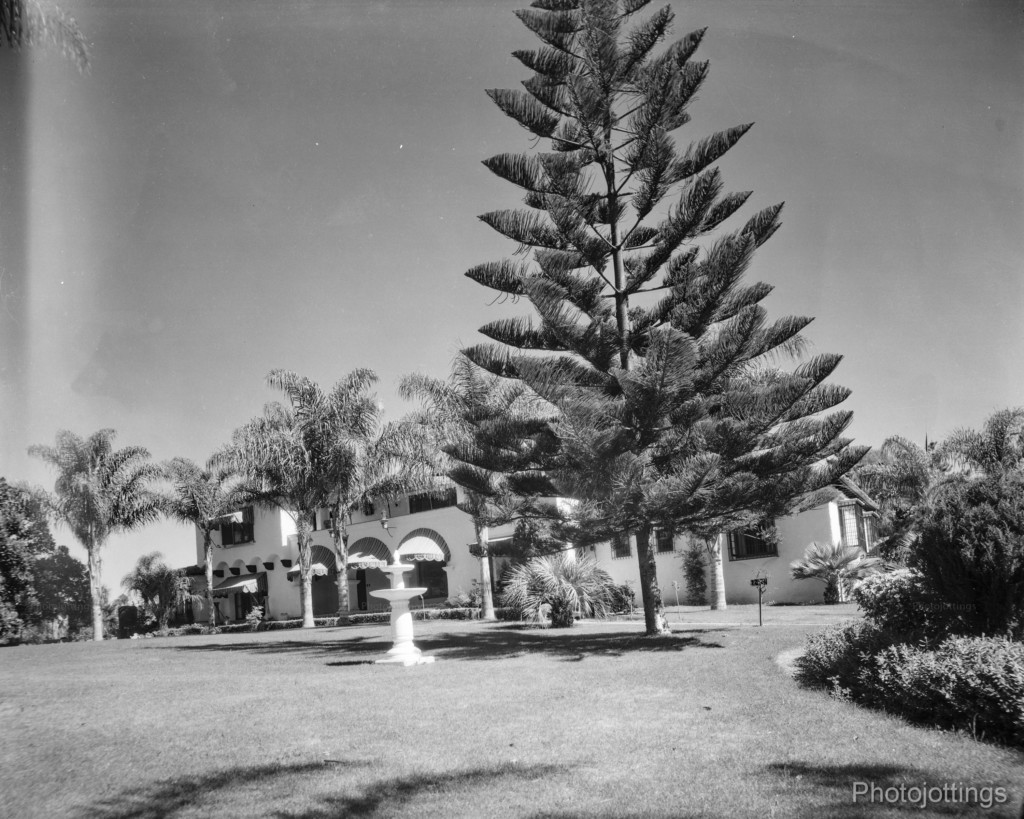 I’m not sure what happen here, an artistic effect, or they just plain forgot to level the camera. 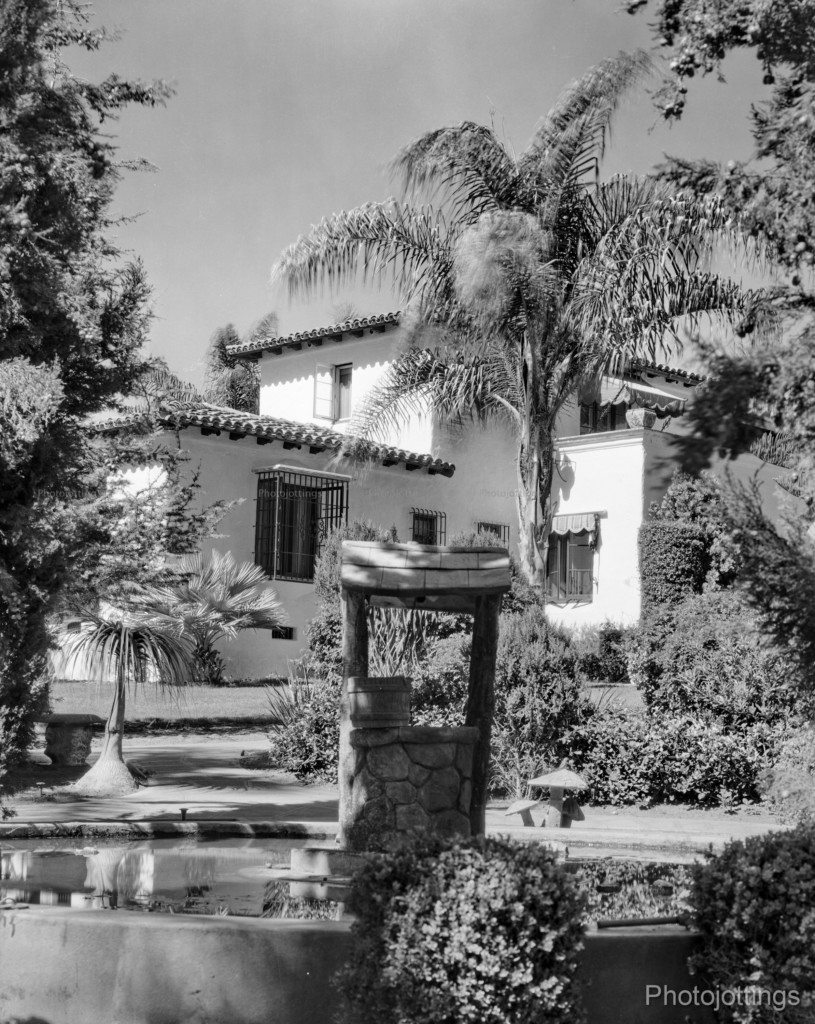 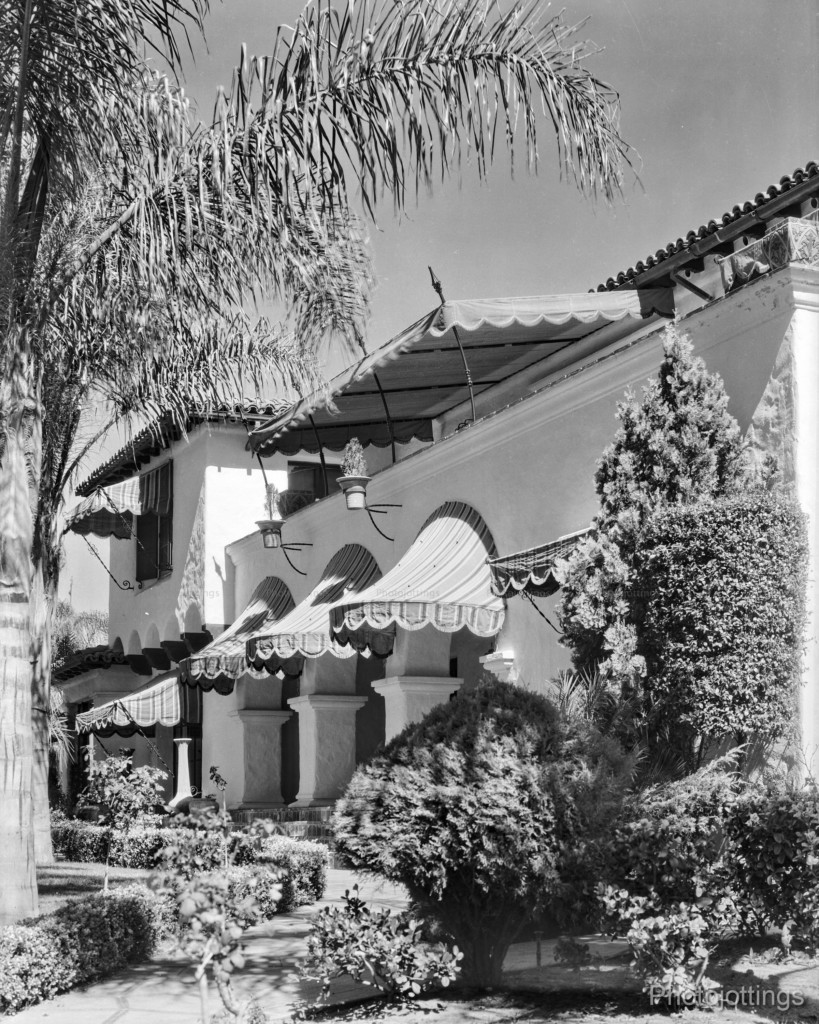 A nice composition here, but again, the blurred foliage is distracting. 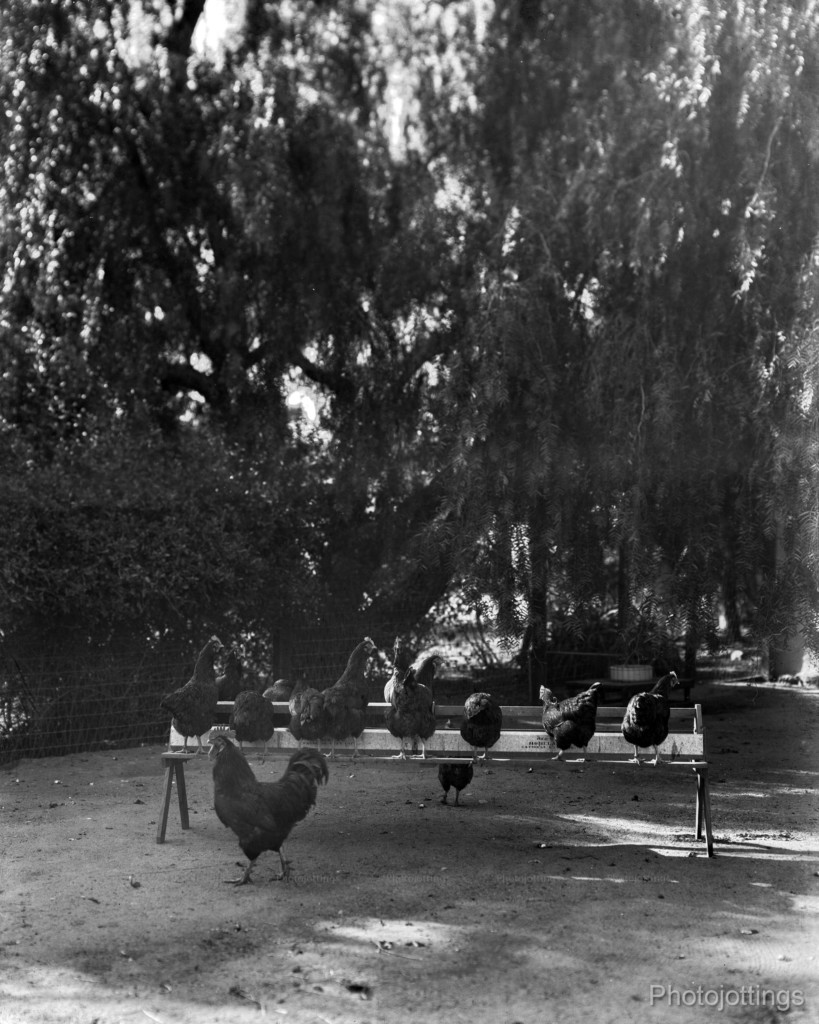 Chickens feeding. Based on the invitation sheet, this may be the main focus of the ranch.  A little under exposed, but to stop movement, they had to keep the  shutter speeds up. 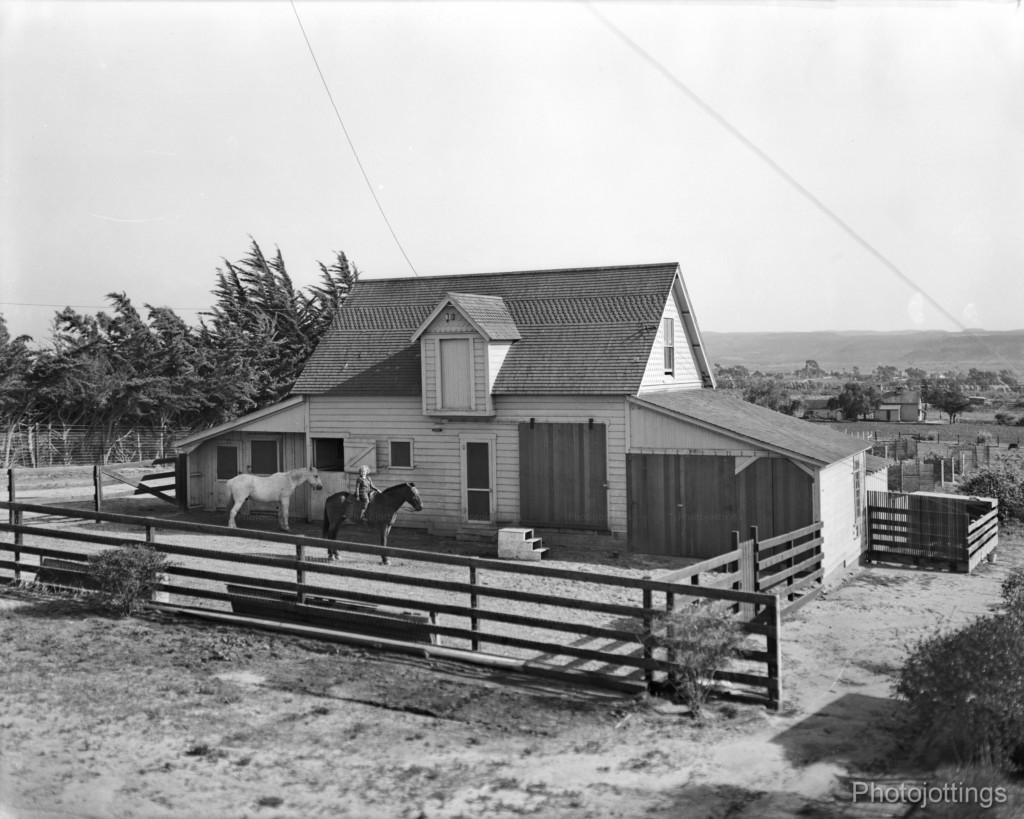 The Barn.  Could that be little Sallie on the horse?  Facing south, and looking into Mexico. 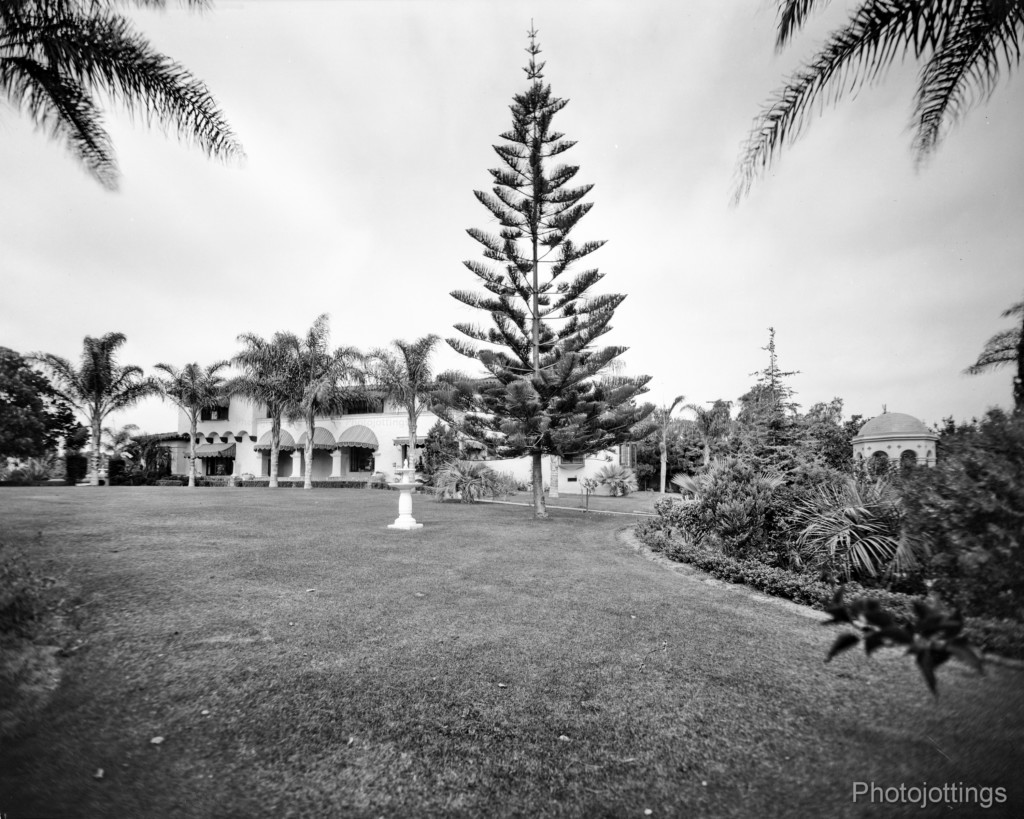 A wider view of the west facing property on a different (and cloudy) day from most of the above shots. 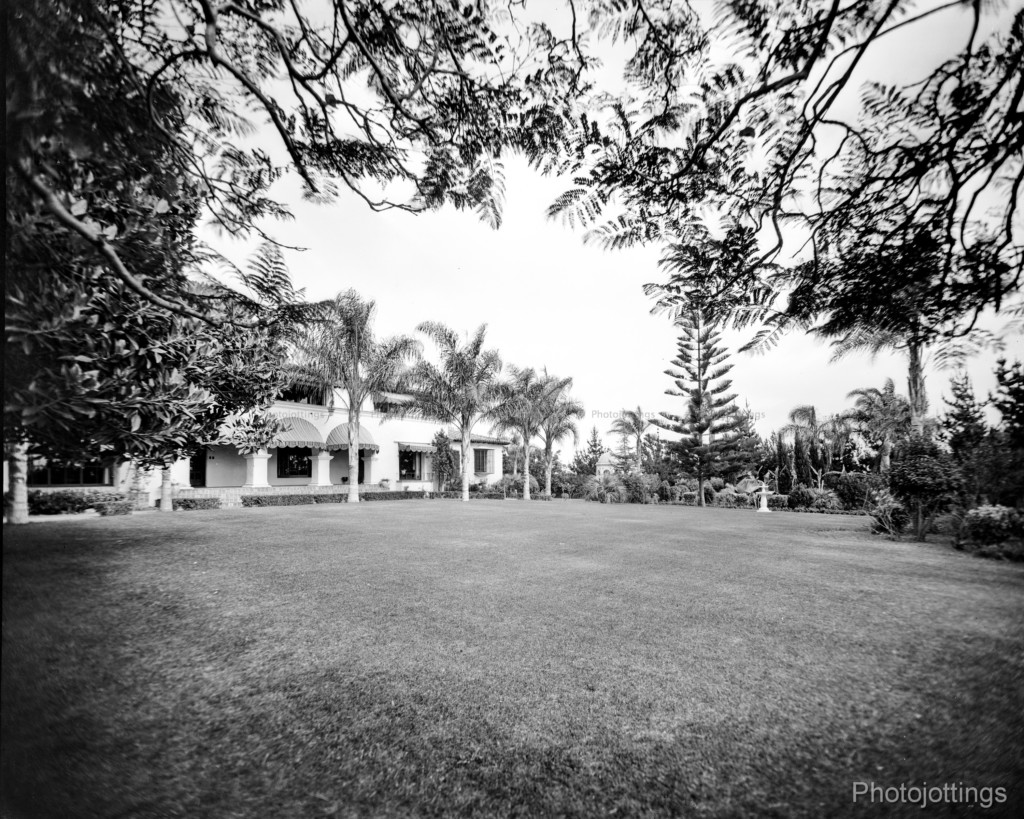 Another cloudy west lawn scene very similar to the one below the bar scene. 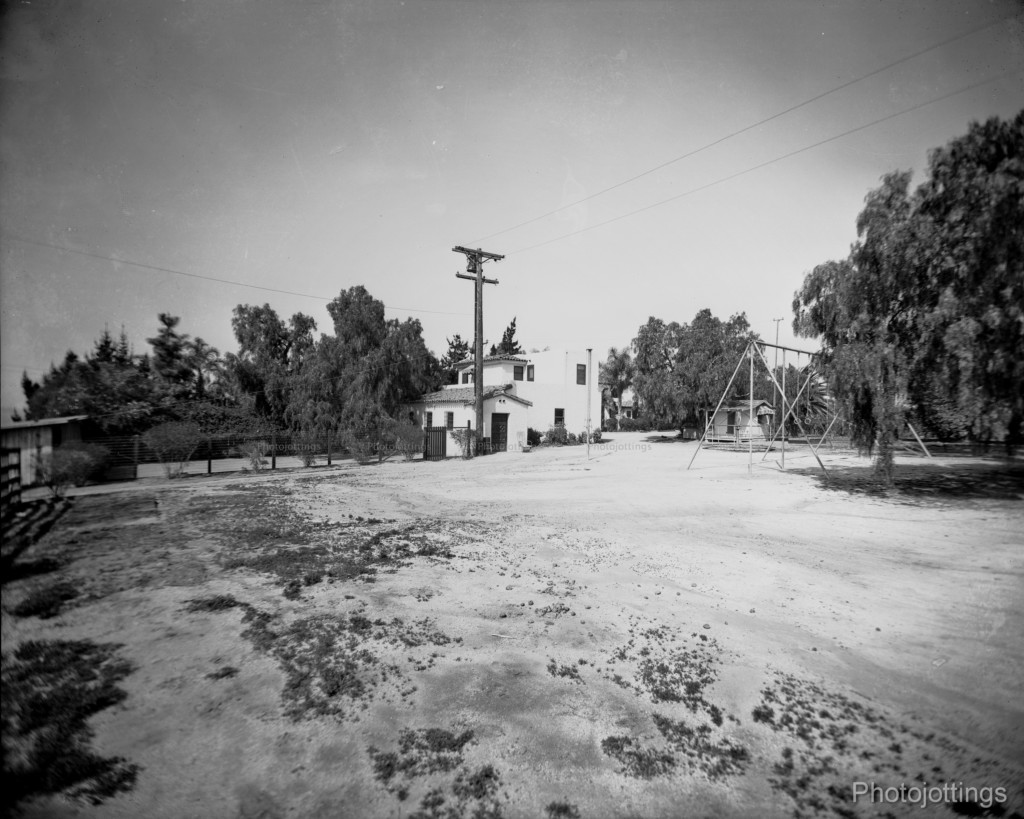 The guest house(?) in center.  The barn is off to the left in this view.  Notice the dog laying in the shade by the dog house.  The small building behind the swing set and merry-go-round looks like a kids playhouse.

That’s it for the whole set.  A very interesting, and expensive home for the time, and the best part, it’s still there!

Here’s the place as it looks from above in 2016, see the Google map view here.  North is to the right.

Thanks for stopping by!