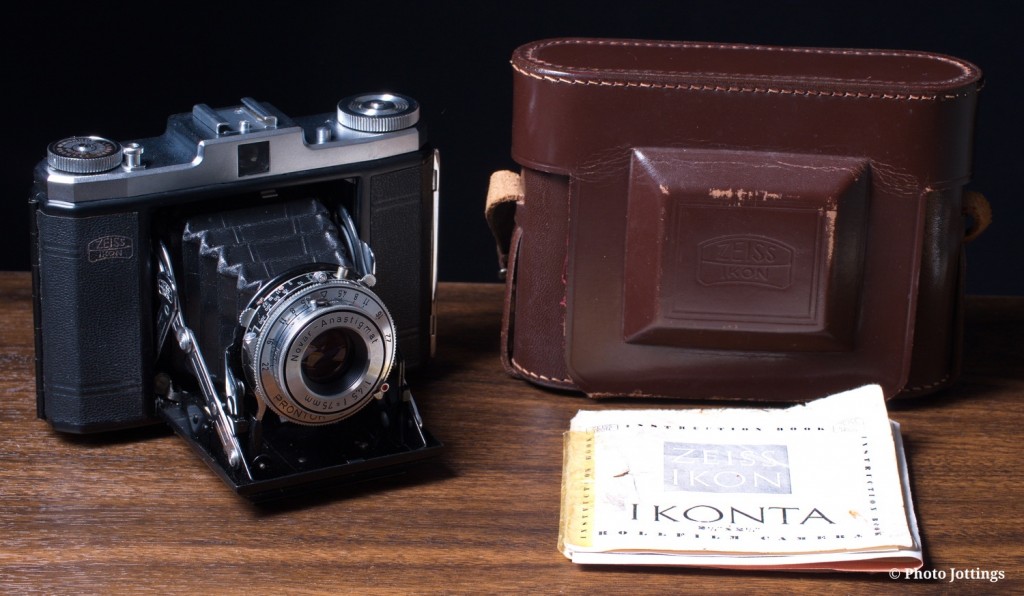 This very Zeiss Ikon Ikonta was purchased by my dad in the summer of 1953 while getting ready to head home from the Korean war.  He bought it at the Post exchange (see picture below) in what was then know as ‘Pusan’ but is now called ‘Busan’ on the maps.  It came with the case and manual as you see in the first photo.  The discounted PX price was probably somewhere between $30-$50.  Note: his previous camera was a Canon IVSB, which is a 35mm rangefinder type.  It was sold so he’d have spending money while on leave in Tokyo, and after returning to Busan, he had some money left over, and bought the Ikonta.  Although the Canon camera was far more expensive and had a much better lens; this Ikonta produced more resolution as the 120 film negative has about 3.5 times the surface area as 35mm.  I noticed this right away as I started scanning the old film from both cameras; however it does depend on film type, meaning if you use Kodachrome with the 35mm, and the standard 120 print film of the day, the differences were not so noticeable.

With the brief summary out of the way, let’s do a walk around of the Zeiss Ikon Ikonta!

Made in; Stuttgart, Germany.

ISO; none, but has an ASA film reminder dial on the right side so you know what film you are using.

Focusing; 4′ to infinity, or 1.2m to infinity.  Focusing is of course manual.  You turn the front element to the required distance.  Marked around the focusing ring is 4, 5, 6, 7, 9, 12, 15, 24, 48, ∞, all based on Feet.  Focusing at long distances doesn’t seem to make a difference either by putting it directly in the middle of the infinity mark, or all the way over which is slightly past the infinity mark.  On modern lenses, that usually makes a huge difference.

Viewfinder; decent, but not great.  My copy is off a bit to the right, and down.  No guide lines or parallax correction.

Light fall-off; I see  only moderate “corner shading” when shooting between F/4.5-11; at other apertures I don’t see any.

Back ground blur or “bokeh;” looks good when close to the subject at wide apertures, see picture below.

Lens; 75mm F/4.5 Novar anastigmat three element front-cell focusing.  Single coated with a magenta hue.  I don’t think Zeiss made this lens, I’ve heard it was Probably made by Rodenstock or Steinhiel.

The are red marks on the shutter, focusing ring and aperture.  This is for making quick snaps off the fly.  It’s called the Zeiss Ikon red dot setting.  It comes out to be about F/10, 1/25 sec at 13′ focusing.  I would not use 1/25 hand held with this lens, you’ll wind up with blurry shots.  Back in the 1950s, nobody scanned a negative at 3000 SPI and put it on their computer screens to zoom in to.  Originally you got small prints, not much bigger than the negative, so slight camera movement did not show up.

The self-timer takes about 6-8 seconds to trip.  Set the flash sync to ‘X’ then push the winder lever to the ‘M’ position.  Note; it won’t work in ‘B’ (bulb) mode.  Be absolutely sure you test the timer out before using it with film.  If it’s all gummed up inside, it’ll stick and the shutter won’t work at all, and then it’s off to the repair shop.  It happened to me on this camera.

Good features; Probably the best feature of all is the folding design.  It will easily fit in the back pocket of jeans, with the size being about the same as a medium to small 35mm film camera with no lens attached.

Quirks; when the camera is folded, you can’t set it down in the upright position because of the pointed spool holder ends and case attachment socket, see third picture below.  You can’t put it on a tripod in the conventional way, (folded up) as it has protrusions at the bottom, so you  have to shim it up around the 1/4-20 socket.  A couple of broken off paint sticks works great; however, with the lens open and a large enough base plate you don’t need to do that.  Also, focusing is not dead-on, meaning if you set the focus to say 15′, and you really are 15′ away, it might focus noticeably in front a little bit, that’s been my only issue with the camera that irks me.

Problems;  none really; but for users that are new to old folders, make sure you check the bellows for light leaks, and the shutter speeds, they’ll most certainly be off, especially at the lower, and highest speeds, my copy has been CLA’d and it only goes to 1/200 at the marked 1/300.  Not a big deal for print film, but for color reversal, you may have to adjust the aperture accordingly to get the right light value. 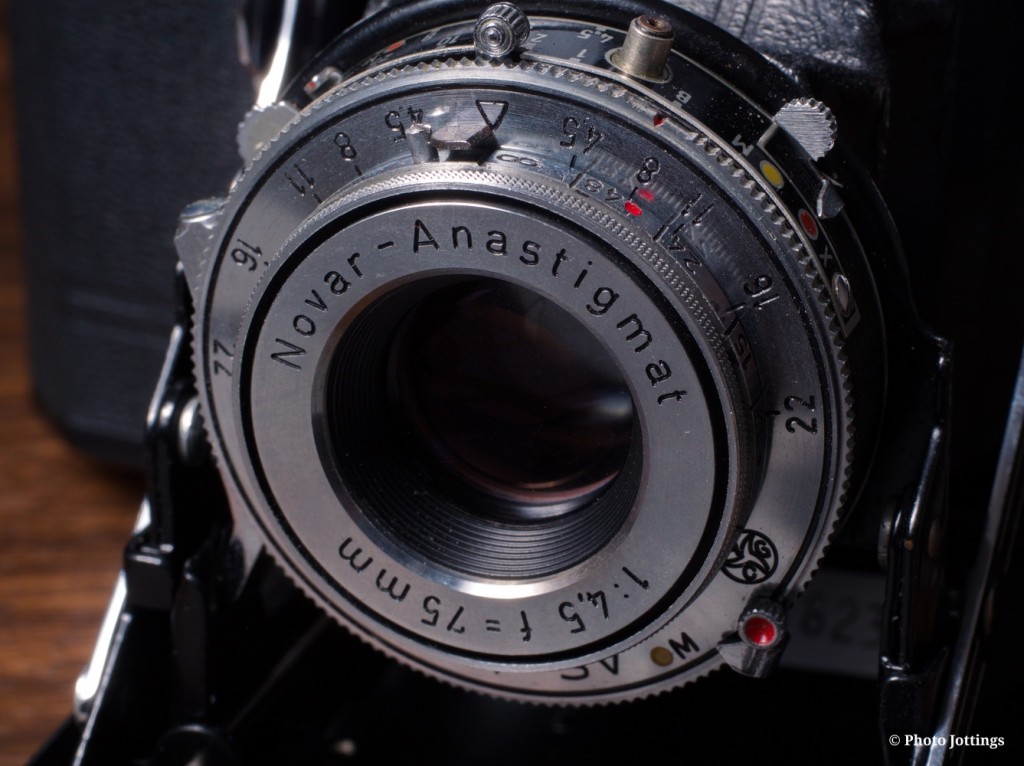 A close-up of the three element front focusing deep-set lens.  You don’t need a hood if you’re not pointing it near the sun.  The lower right red button is for the self-timer, don’t use this unless you’re sure it’s going to work properly, otherwise, you might wind up with a non-working camera; trust me, I did that, and had to have it repaired(!) 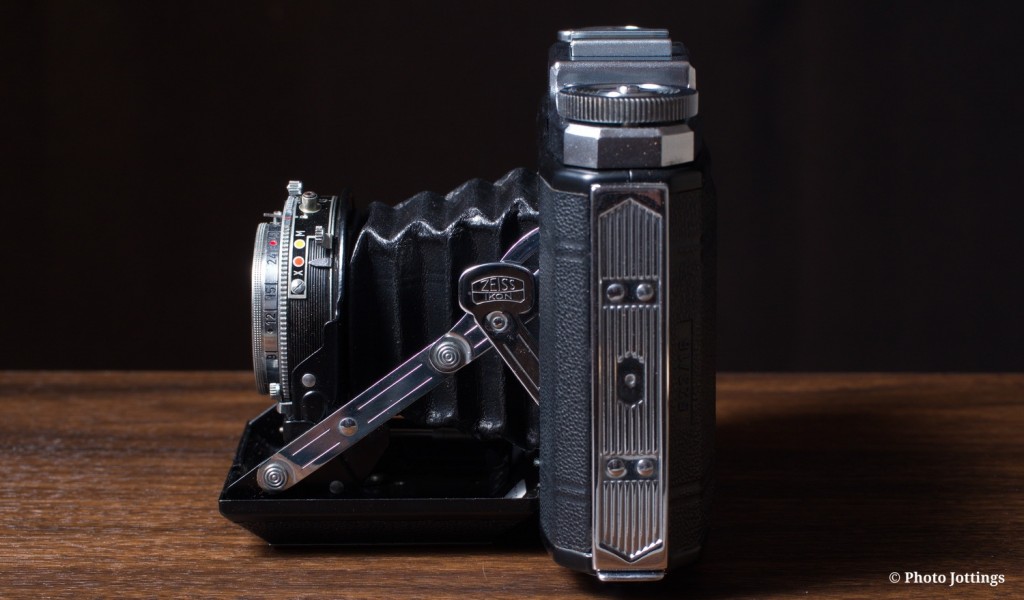 Extended out and ready to shoot.  The silver catch on the bottom of the side rail opens the camera back when pushed down. 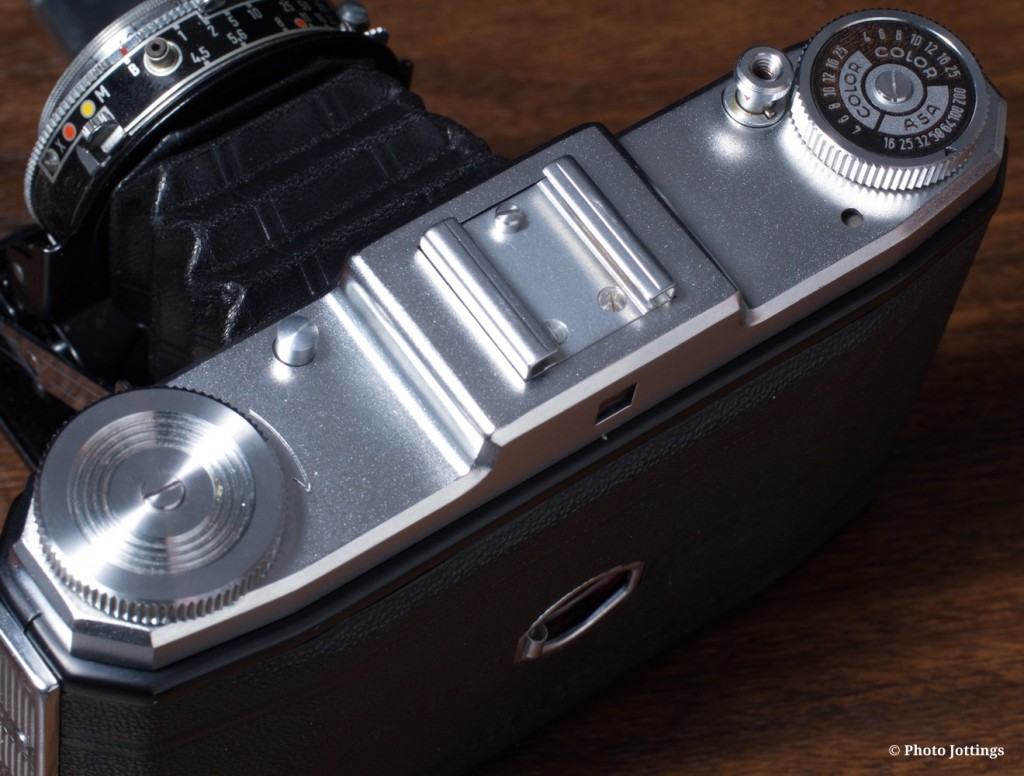 Cold shoe in the middle, winding knob on the left, and the film reminder dial on the right with settings for B&W, color print, and color reversal film.  The tiny circular opening below the film reminder dial is the film winding lock indicator, it turns red if the film has been advanced for the next shot.  The little button on the middle left releases the front bed, and the larger button on the right is the threaded shutter release. 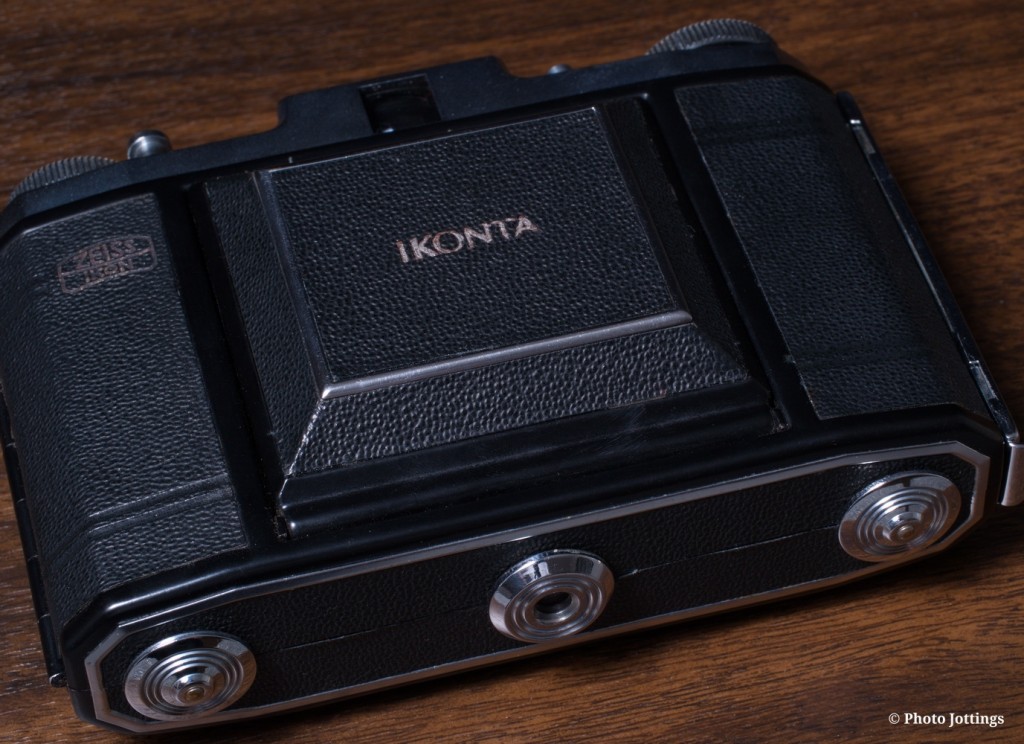 The bottom shows the 1/4-20 tripod socket (for US market) in the middle, and the two film spool pins on either side.  Tripod use requires either a large mounting base plate to support the bed when folded out, or shimming the base plate. 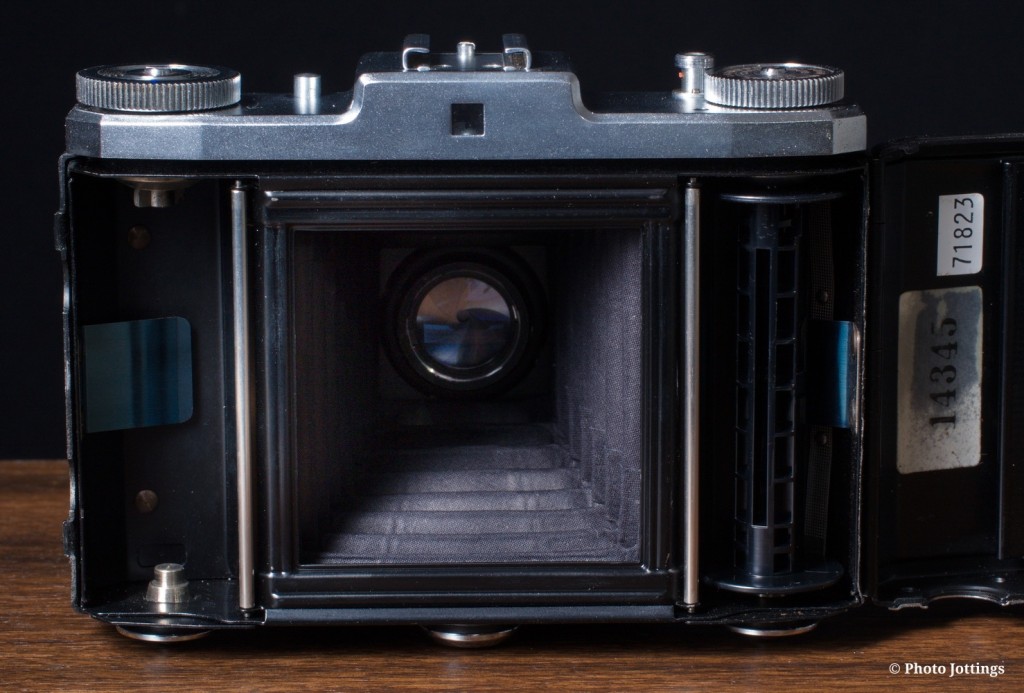 With the back open you can see inside the bellows to the back of the lens, and the film gate advance rollers.  The new film roll goes on the right, with the take-up spool on the left; I forgot to move the old spool over after I finished the roll.  Notice the little viewfinder window, you’ll need to put your eye right up against it to see the complete coverage. 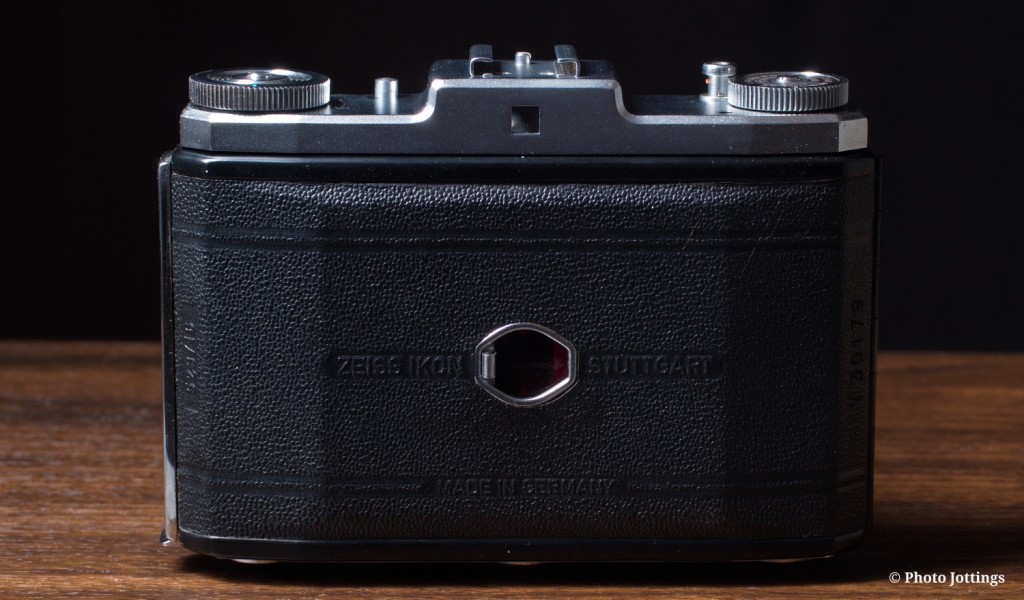 On the back we have the film advance window which has a red filter on the inside.  The little tab is part of the door that slides shuts to keep light out, but you really don’t need to close it, it doesn’t seem to matter.

Parts of the camera from the original instruction manual.

Here are a few samples for your viewing pleasure.  They’re about 3000 to 4000 pixels wide.  Click images for a larger version. 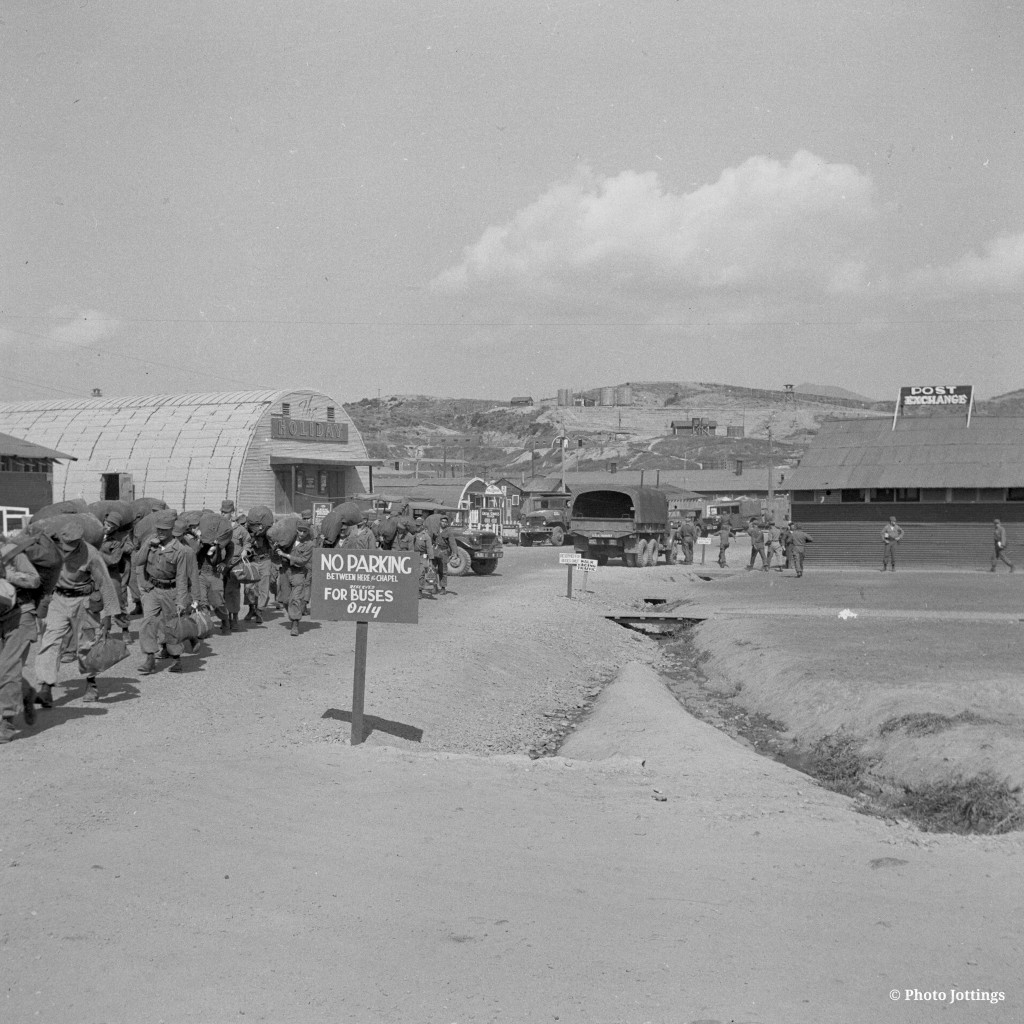 This very camera was purchased just moments before at the Post Exchange building located on the right side of the picture.  Taken in Sept 1953. 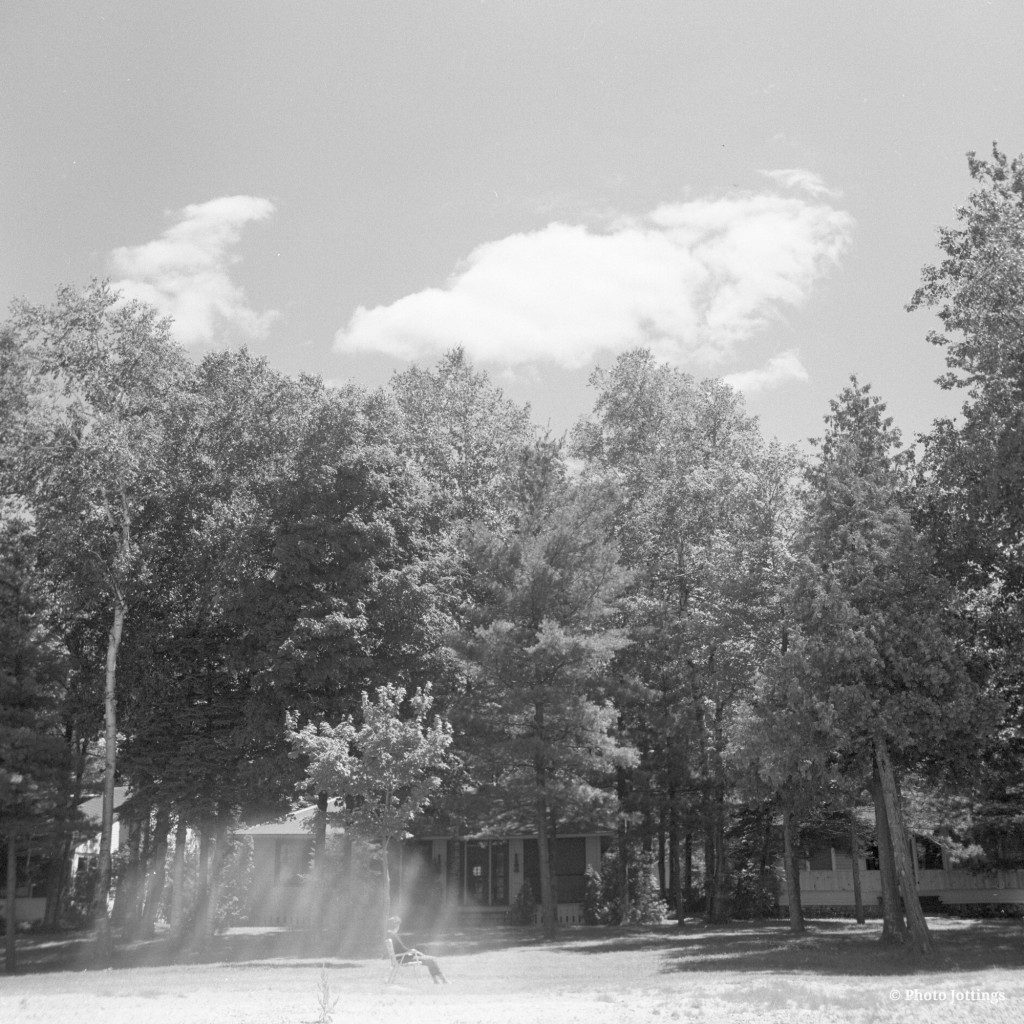 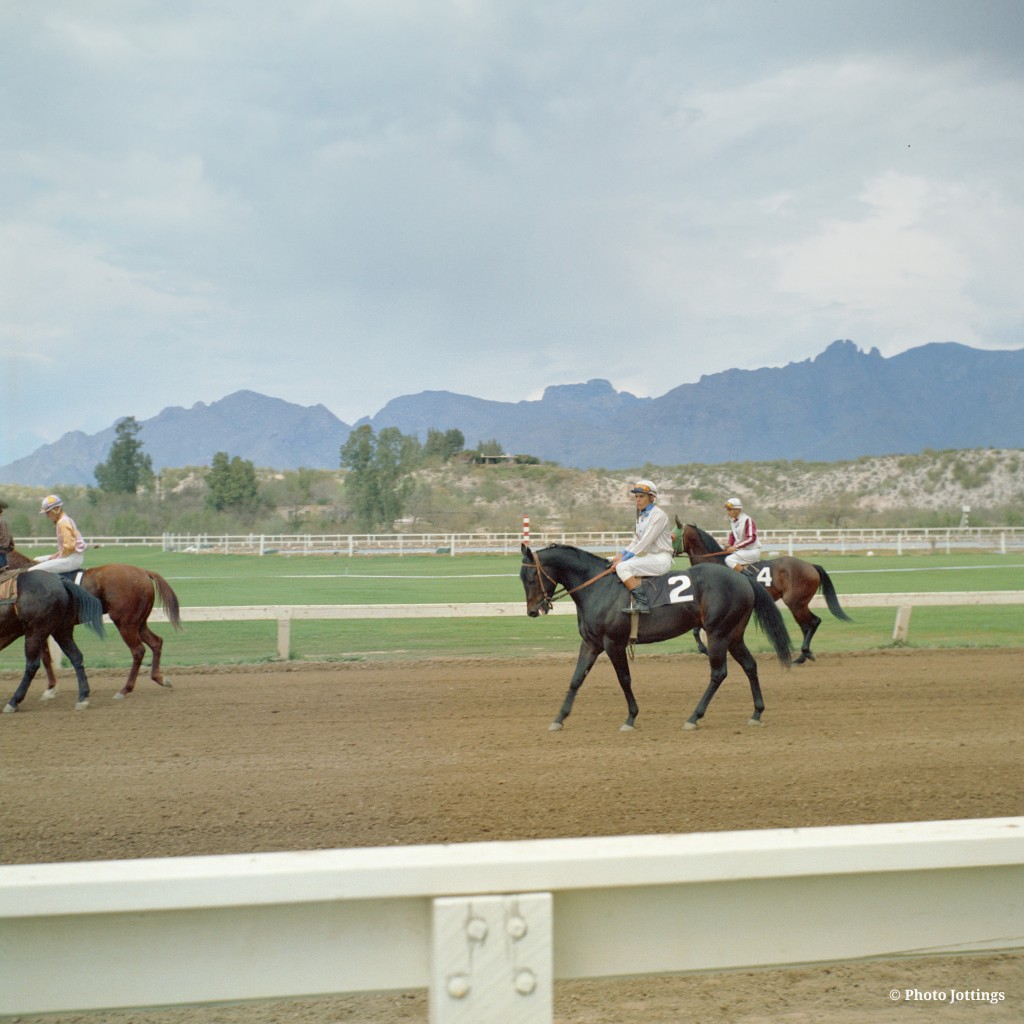 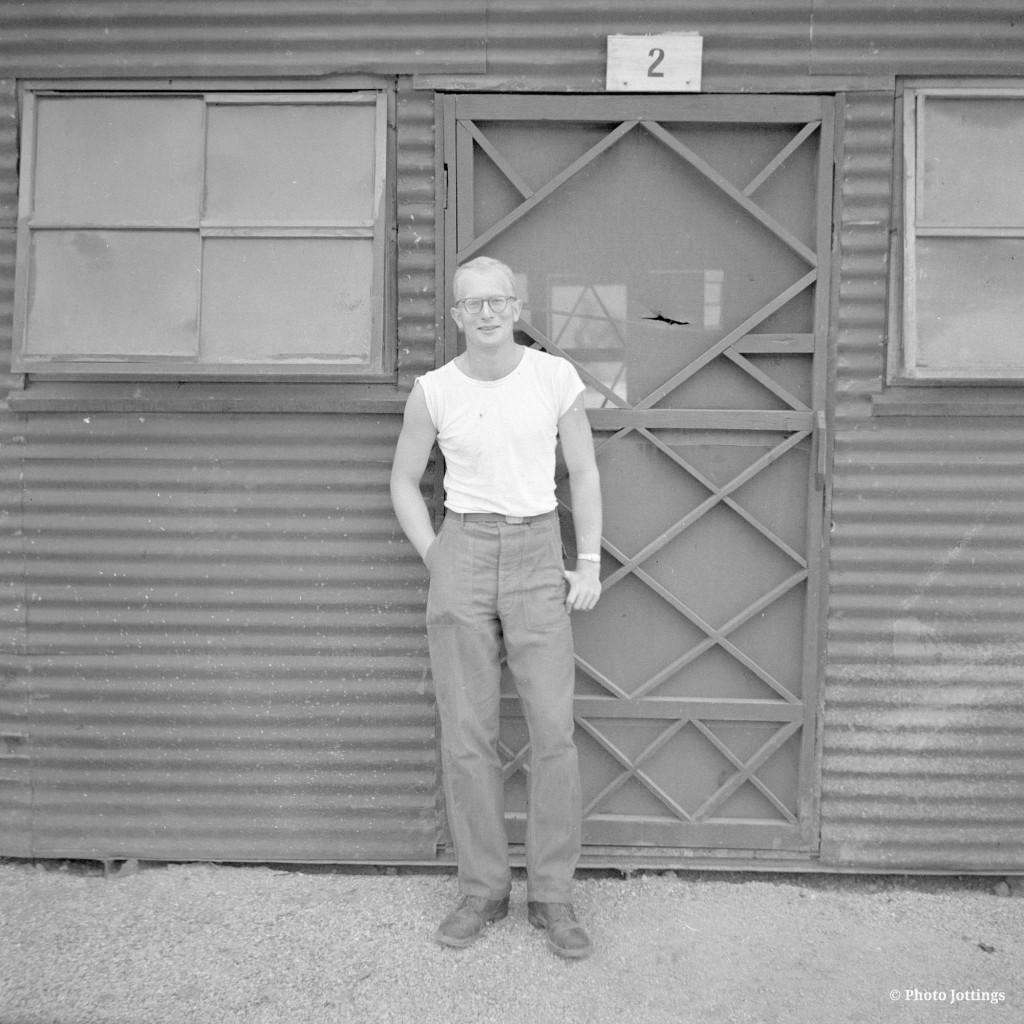 Distortion not really noticeable is you look carefully at the corrugated lines across the top. The young buck is PVT G.M. Ballard, Pusan South Korea, 1953 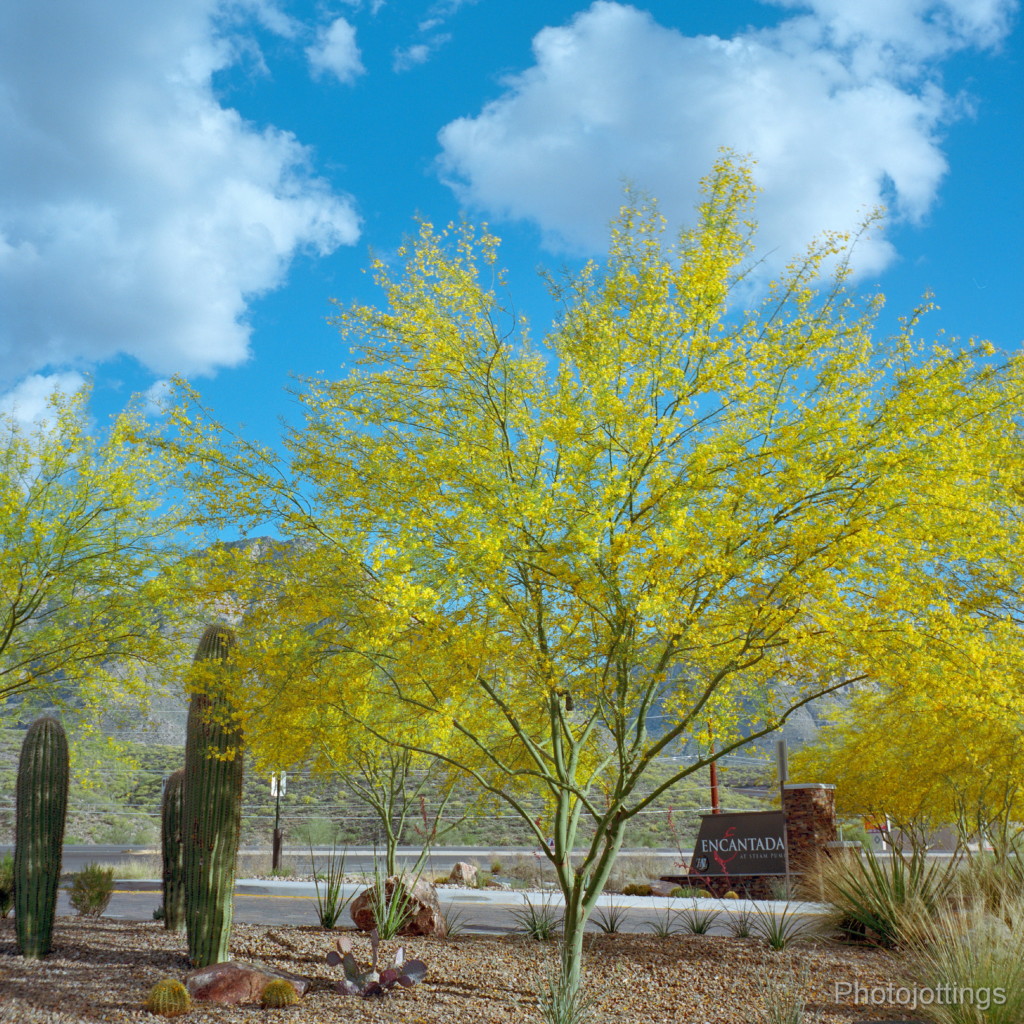 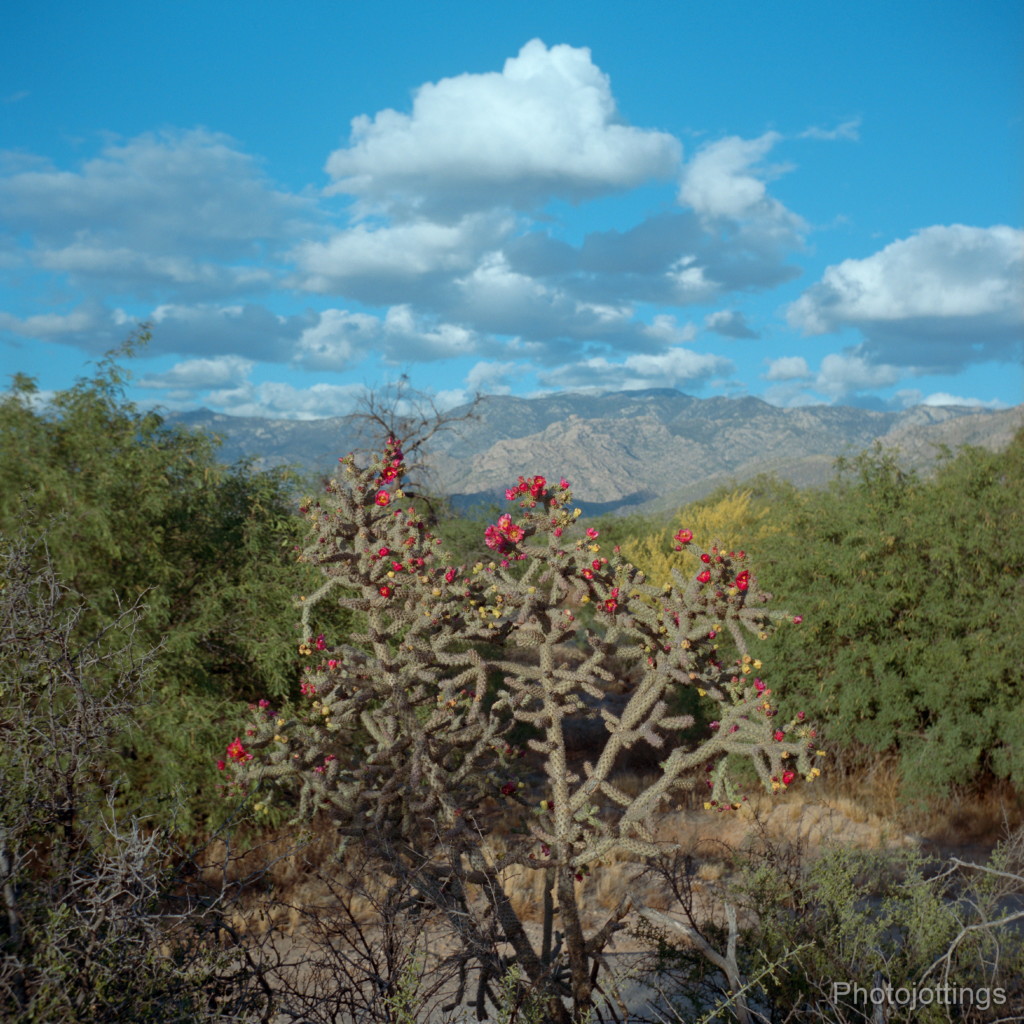 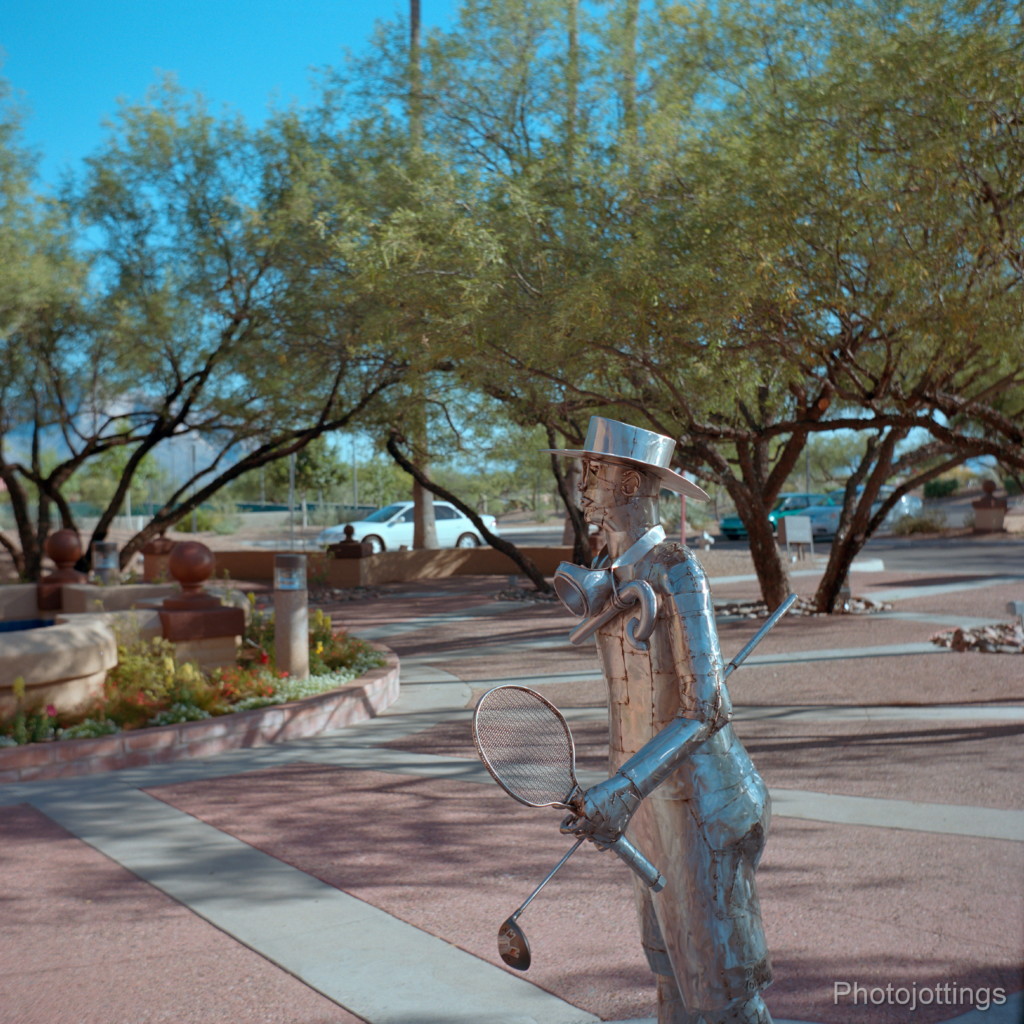 All test shots are displayed at 5000 x 5000 pixels wide when enlarged, and that’s all the resolution included in the film.  Scanned on a Nikon Coolscan 9000 ED.

Here is our standard Mountain test scene, this time using Kodak Ektar 100 film.  A tripod was used, but no filters. 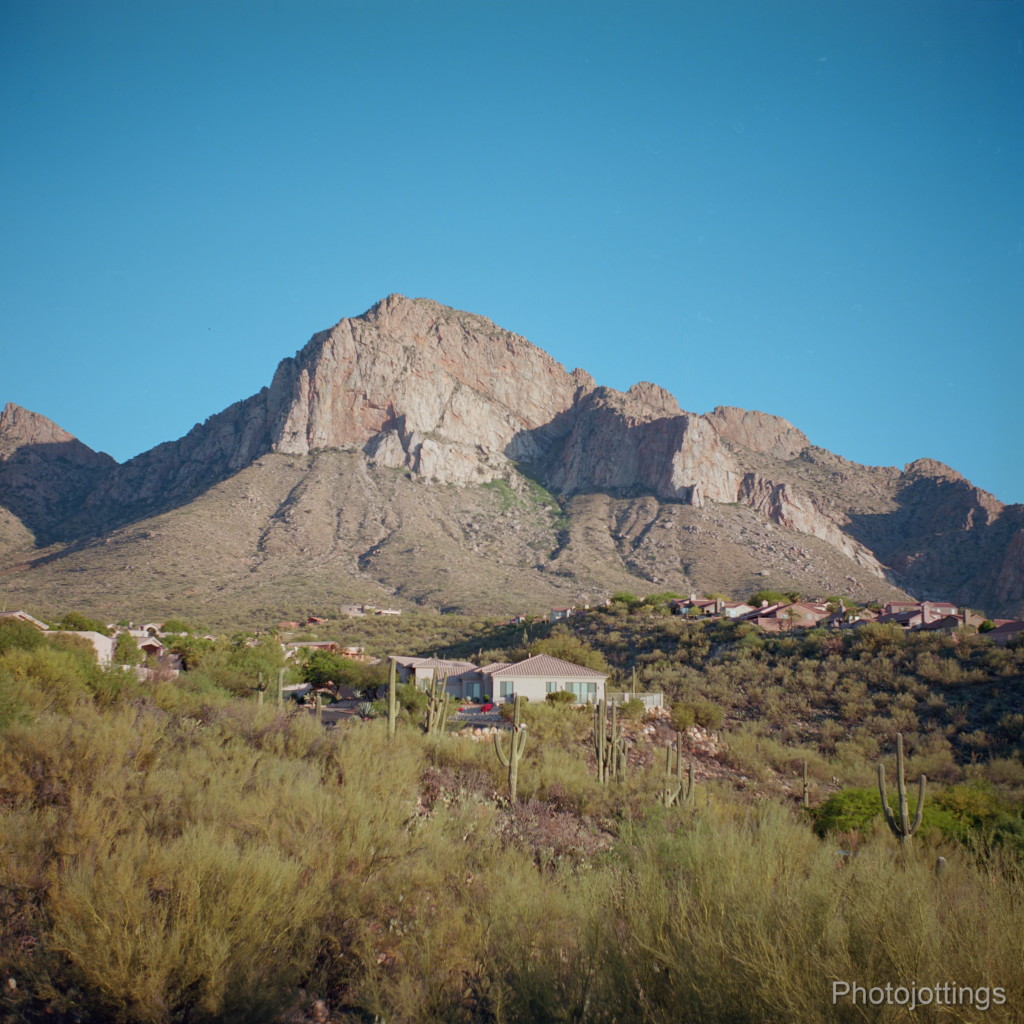 F/4.5.  Decent sharpness in the middle, but soft along the sides and lacking contrast.  Usable for medium to small prints. 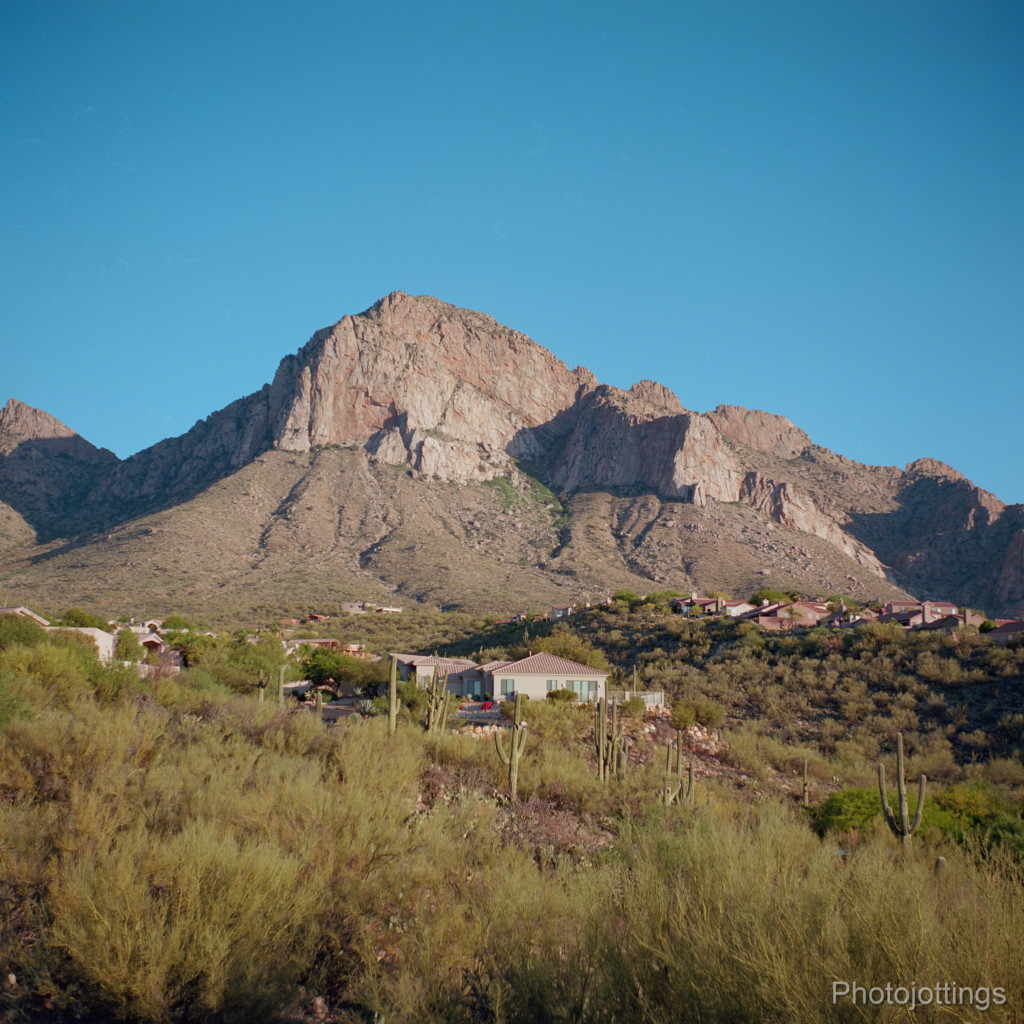 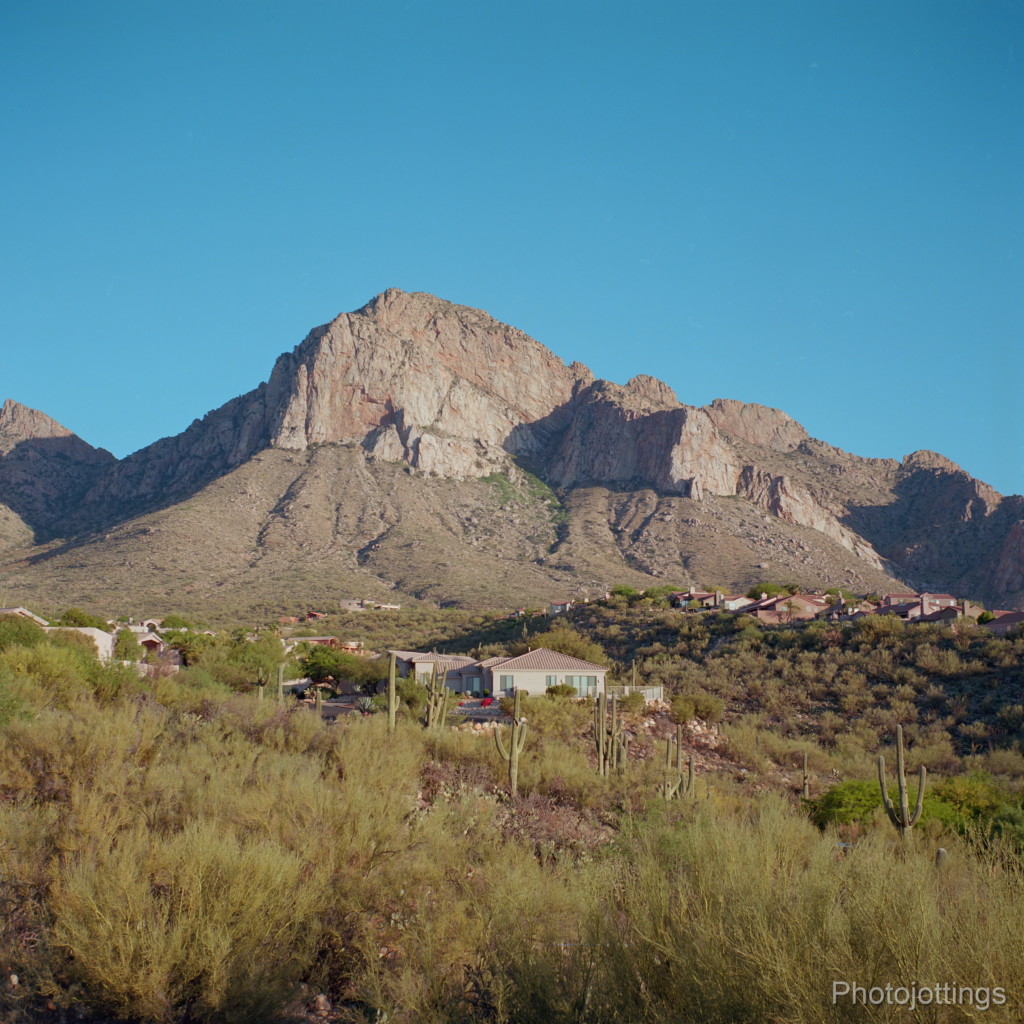 F/8.  Sharpness and contrast  looks better here, but not drastically so. 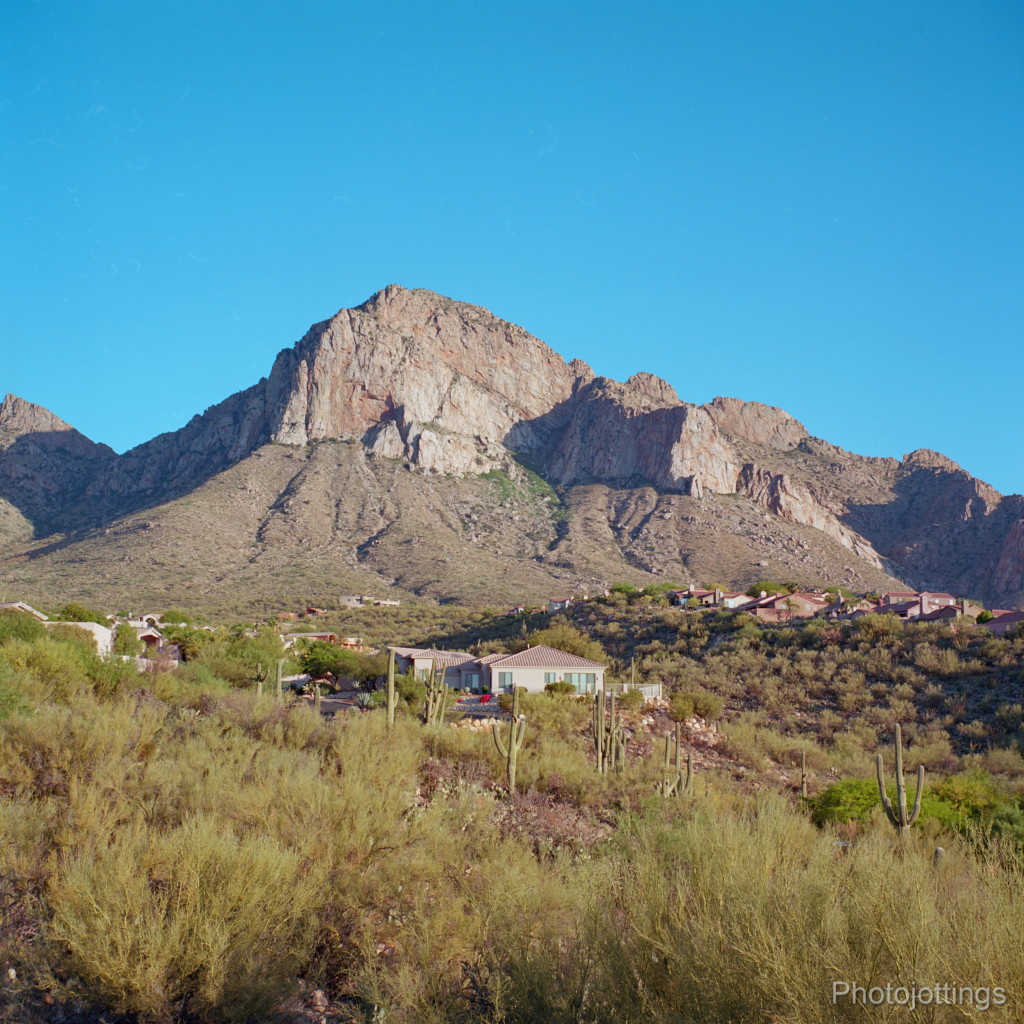 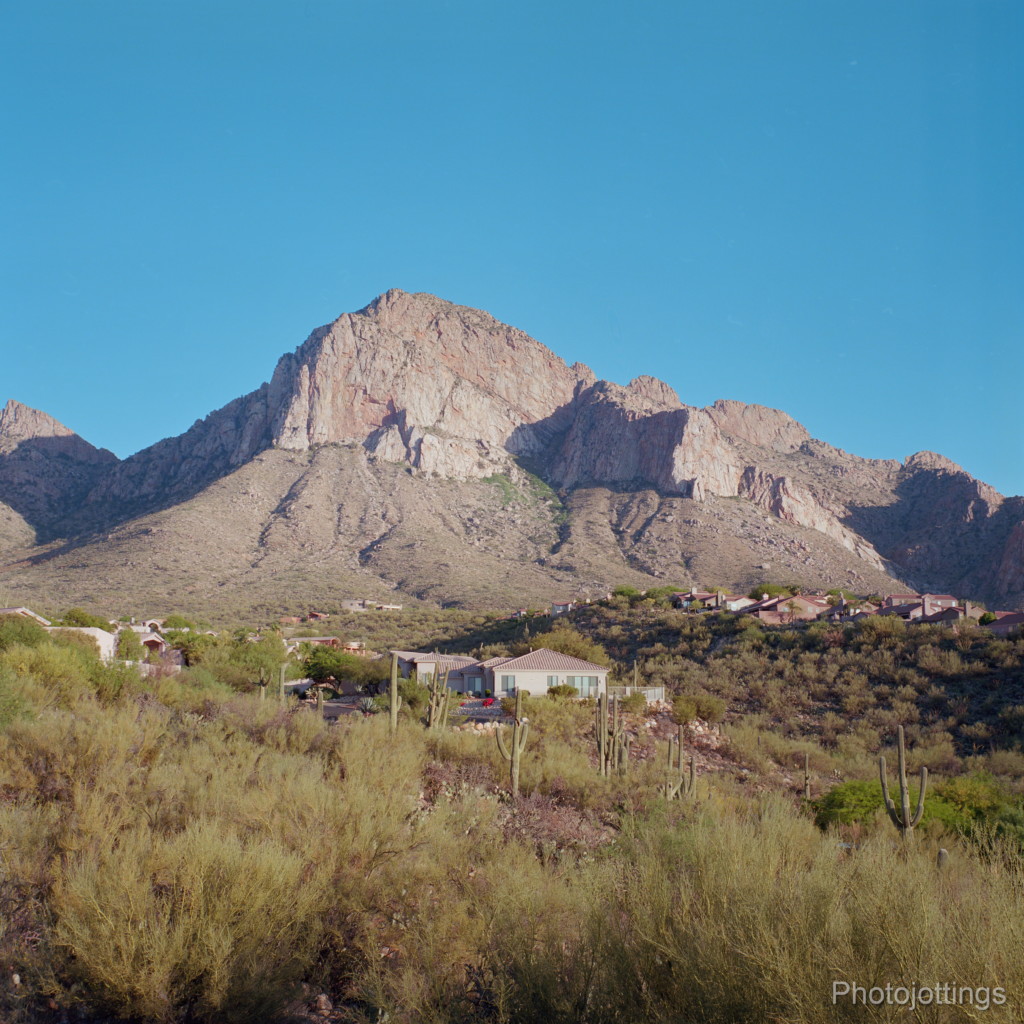 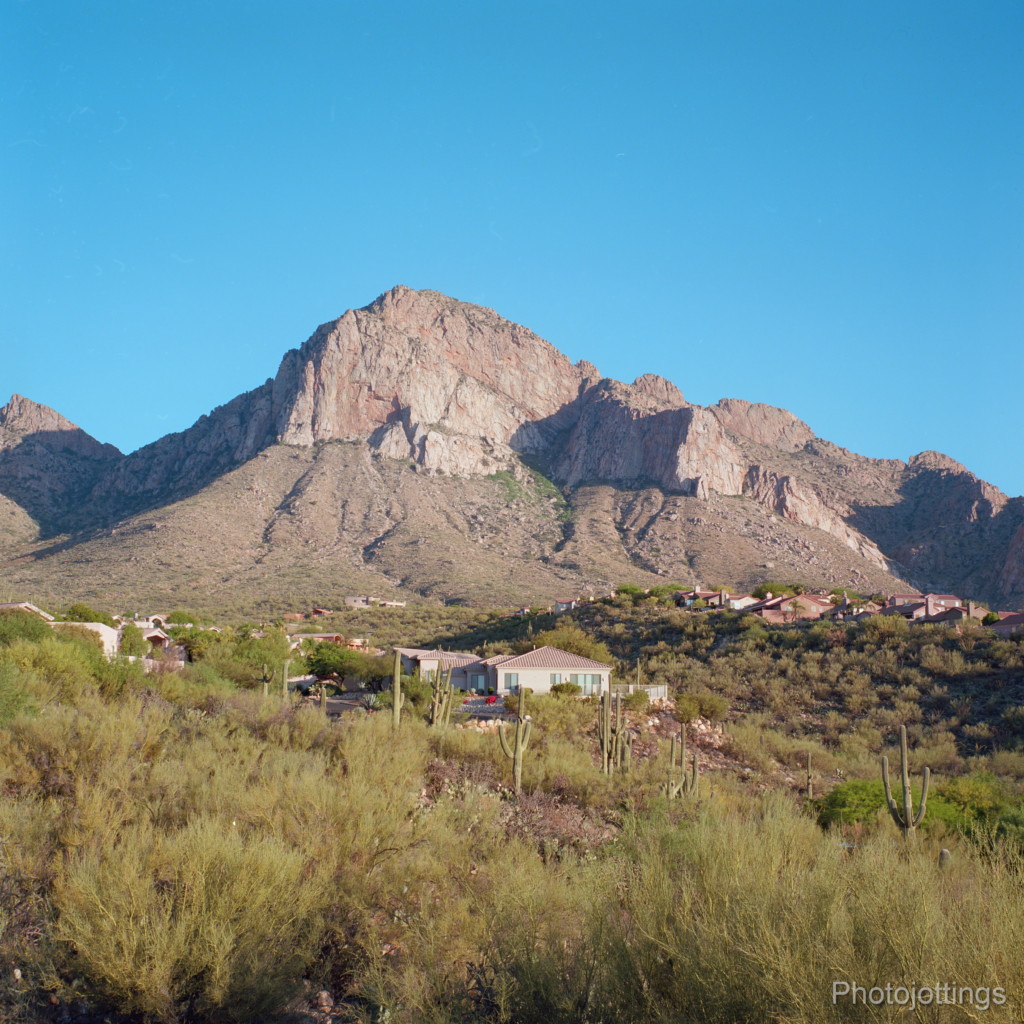 F/22; looks about the same as F/16, but shows slightly sharper along the extreme edges on my camera, mostly on the left side.

The Zeiss Ikon Ikonta 523/16 B is a fun camera, and very handy for hikers or people new to medium format.  The resolution of the images is more than what you’d get with the best 35mm camera and lens combination using the same type of film.  It’s also about the same size as a standard 35mm camera with a small lens, and it’ll fit in a jacket pocket, or the back pocket of your jeans.  So you don’t know how to expose film properly without auto exposure? no problem; if you’re using print film or B&W, you don’t need  to know too much about light values and all that, just use the sunny 16 rule, and go from there.  I often shoot in good light at F/11-16 with ISO 100-200 speed film at 1/100 sec, and the pictures always come out just fine.

Other features that make this an easy and convenient camera to use; it requires no batteries, and takes readily available 120 film,  B&H, Amazon, eBay.

Typically with old cameras, especially ones with bellows, you’ll need to check the shutter speeds for accuracy, and the bellows for holes before you use it, so you don’t wind up paying for a roll of film, and processing, and maybe even scanning only to learn the camera was screwed up: that could easily cost you $15-$20.  I’d pay a premium for one where the seller has had the camera cleaned, lubed and adjusted, and can verify, or hopefully guarantee it’s ready for taking pictures.

Use notes:  the Ikonta with Novar lens is best at F/16-22, the whole picture is sharp, however, that leaves you with a shutter speed of about 1/50 in good light with ISO 100 film.  For best results, use a tripod.  The Novar lens is very sharp stopped down.  Print film shows about the same resolution as transparency, like Fuji Velvia, so don’t bother with the extra developing time and expense hoping for more resolution.  Cameras like these may not work quite right after half a century or more; print film is more forgiving of exposure misses, and offers more dynamic range, especially using modern print film.

The Zeiss Ikon Ikonta with Novar lens and 6×6 area of film are capable of producing super sharp digital scans of around 4000 x 4000, (or more depending on type of film), which equates to at least 16 megapixels; not bad for a cheap early 1950s camera.

Note: this review has been heavily updated from the original to include shots after a professional clean, lube and adjustment of the shutter mechanism and lens group by Jurgen of Certo6.  I think it really helped out a lot!  The shutter speeds are pretty close to indicated except at 1/300, which clocks in at 1/200 sec, and I’d guess that’s about what it did from the factory based on the other two dozen folders that I have.

That’s it for this review; two thumbs up for Pops old camera, I’m going to keep it until I wind up where he is.