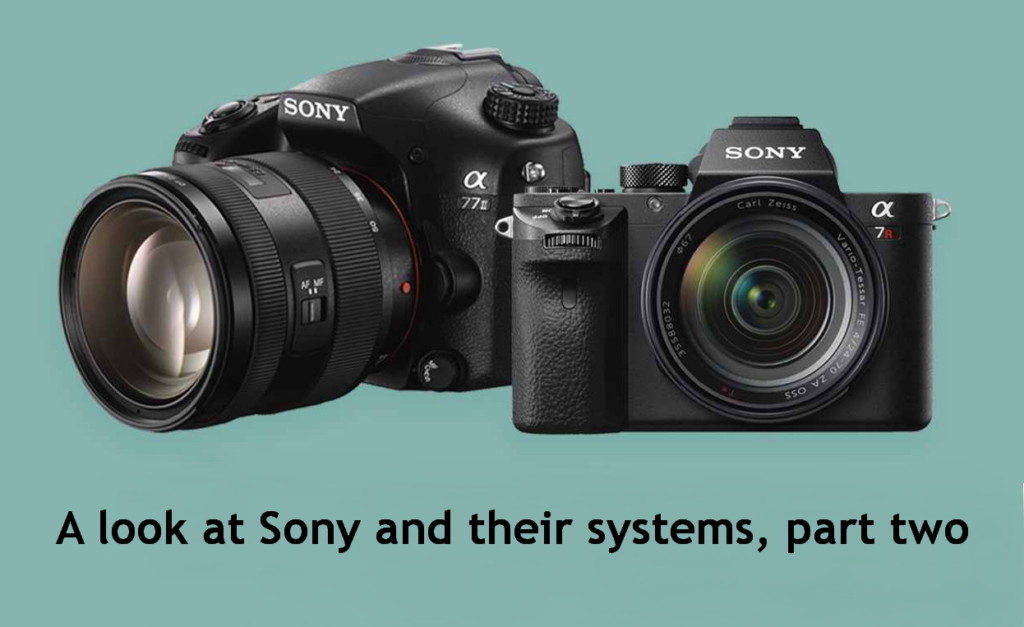 It’s been three years since I wrote a post called ‘Sony and their systems,’ see the old post here. In that article, I covered each system, number of cameras and lenses, and the average retail price.  It was quite an eye opener then, with lens prices coming in higher than expected, and the overall selection of new lenses and accessories was a bit disappointing.  So how are things looking three years later?  Really good, or really bad, depending on what system you bought in to.

Just as a ‘for what it’s worth’ paragraph, I started off with Minolta (Maxxum 7000) in the 1980s with film; then bought in to the Konica Minolta digital ‘DT’ system around 2005, and hoped Sony would improve the selection of cameras, lenses and accessories when they purchased the Konica Minolta camera division in 2006.  Well, Sony most definitely expanded their camera offerings, but lenses and accessories did not seem to be very high on the list of priorities for Sony marketers, and so there were few options to try and expand my creativity.  As a result,  I was somewhat disappointed for a few years, and switched to both Canon and Nikon, but never really gave up with Sony, and actually got re-energized by the NEX system in 2010.  So with that said, let’s get started!

Below, you’ll find information on the number of  cameras and lenses, average prices for each system, and ‘as compared’ to three years ago.

Prices and availability are from Sony’s US retail website as of March, 2017.  There are older products still available from retailers, but if Sony is not advertising them on their site, I do not consider it a ‘current’ product.

Full Frame ‘a’ mount system.  Called ‘alpha’ and goes all the way back to 1985 using 35mm film.  Sony is currently offering this mount with two cameras, the original A99 SLT, and the A99II SLT.  The A99xx are top notch cameras, but good luck getting a top notch lens; almost half the current selections were designed in the 1980s or 90s for film cameras, not digital.  Funny, but Sony still offers the Minolta mid 1980s 16mm fisheye lens with color filters!!  Sony has designed only one prime telephoto lens, and it’s a great one, the 135/1.8.  Don’t forget Sony’s only super telephoto lens, the 500/4, unfortunately, it’ll cost you almost as much as a new car; oh well, tough luck for us normal folk.

As I said three years ago, move away from this system for any serious work, it’s effectively dead.  Yes, Sony will continue to make a new camera body every couple of years for ‘a’ users, and you might get a couple of new lenses from the likes of Sigma or Tamron, but other than that, good luck.

I just noticed during my prep work for this article; it appears Sony has discontinued the two teleconverters for this mount, but they’re still widely available from retailers with new old stock as of this post.

Current full frame cameras available; 2, the A99 and A99II.

Current full frame lenses available; 21, among those, 9 are Minolta Designed, and 11 are Sony/Tamron produced from 2006.  Eight lenses use the very outdated slot/screw focusing system with motor that’s inside the camera body, not the lens.

New full frame lenses for the last three years; 0.  Note; 4 zoom lenses were ‘upgraded’ which usually means minor improvements to coatings and/or AF systems, and are designated with a ‘II’ at the end of the lens name, or ‘2’ at the end of the product ID.

Current cameras available; 2, the A77II (almost 3 years old),and the A68. May still list the A58, but it’s discontinued with most retailers.

Current lenses available; 12, all are Konica Minolta and Sony/Tamron produced for aps-c sensors.  Most produce good quality images, especially the 35/1.8 and CZ 16-80mm (at longer lengths), some not so good, like the dated 11-18mm, and 18-250mm for example.  Four lenses use the very outdated slot/screw focusing system with a motor that’s inside the camera body, not the lens.

E (formerly NEX) system.  Includes, aps-c, and full frame sensors, which are known as ‘FE.’  and is Sony’s newest system.  Since the debut of the NEX system in early 2010, Sony has come out with 20 total cameras (both ff, and aps-c) and 43 lenses, not including adapters and teleconverters.  I’m not including aftermarket stuff from Sigma and Zeiss Touit etc, some of their lenses are really good, but are not from Sony.

Sony FE system.  This is Sony’s ticket to the big time, and your ticket to bankruptcy if you’re careless and not well-off financially; this system can be very expensive!!  Initially this line was sold as being lightweight and portable, but the new lenses are bigger and heavier than the ‘a’ mount stuff, so expect the camera bodies to get bigger in the near future.  There are still no telephoto or super telephoto prime lenses seven years in.  A new GM or ‘G’ Master lens line (big, heavy and expensive) offers excellent resolution and technical image quality.  There are some great lenses by Zeiss and others that really make this system stand out.  Go here for a thorough lens list for the FE system.

Current  full frame lenses available; 20, most primes are very good to great, the zooms vary from decent to great.

Total number of full frame lenses produced; 20, or 22 if you count the new teleconverters.

Let’s check out the average prices for 2017.

To sum up my thoughts on Sony’s four different systems; ‘a’ mount is gone, forget it unless you like screwing around with old film era lenses. Both aps-c systems are done for still photographers, there’s been nothing from Sony to indicate any new meaningful products unless you’re in to video.  It does appear Sony is going for the aps-c/super35 video market based on the newest camera and a new 18-110mm zoom lens.

The center of the still photography universe is the FE system; this is the gear to get, even if it’s expensive. Thankfully, there are a whole lot of aftermarket manufacturers that are producing great lenses, and it can be affordable if you buy the older camera models, like the A7, and get a couple of manual focus lenses to start out with, see the complete guide here.

I’ve been using Sony FE gear daily for over three years now for business, and I plan on sticking with it, I really like the quality and direction of the system.  Most of my equipment consists of wide angle lenses like the the 16-35mm, and 24-70 for interior, RE, and architectural photography, and the A7R camera. I do own and use the little 35/2.8, it’s a compact lens with very good quality; also the 55/1.8 and 90mm macro occasionally, both are excellent lenses.

So that’s it, thanks for reading!