Sony 135mm F/2.8 T4.5 STF Review - Photo Jottings
Here’s a brief look at the Sony 135mm F/2.8 [T4.5] Smooth trans focus lens.  Scroll down for the review.
Requisite product shots.
All testing done with the Sony A700, and Sony A900.  For full frame results, go to the bottom of the page.   For a better understanding of the terms and methods used for this review, go here.

The Sony 135mm F/2.8 [T4.5] Smooth trans focus (made in Japan) is a pricey specialty lens aimed at advanced amateurs and professional photographers (with loads of cash) who demand the very smoothest Bokeh, or blur.  Bokeh is a fancy word for how the lens renders out-of-focus highlights, in the foreground or background.  Connoisseurs will love the blur this produces when looking at their images fully enlarged on their computer screens.  This lens is a real F/2.8, but the use of an “apodization” element causes the actual light gathering ability to be reduced to an equivalent of F4.5, or what Sony calls “T equivalent,” or “transmissive brightness.”  You won’t see F/2.8 on your camera LCD, it starts at F/4.5.  This “apodization” element is similar to a neutral density filter, but different in the fact that this element is thicker (and darker) towards the periphery, and very thin in the center.  There’re actually two elements that form one group to make up this feature, and is included in the elements/groups count.  The apodization group, and the 10 blade stepless aperture work together to give superior “bokeh” results.  More on this subject later.  This is a re-badged Minolta from 1999 I believe.  Box contents include a plastic hood, and a black vinyl-type carrying pouch.

The Sony 135mm F/2.8 [T4.5] STF is the only black colored lens from Sony that will accept a Sony tele-converter.  For a couple of comparison crops, go below.
Build quality is very good.  Fit and finish are indicative of other high-end Sony lenses.  It has a satin black finish that matches the A900 better than the A700.  The lens has a focus distance scale with ft and m in different colors along with DOF hash marks at F/32.  It also has a ring to move the 10 bladed aperture from F/4.5-F/6.7, but more on this farther down the page.
Focusing.  This lens is manual focus only.  When going through the entire focus range, you’ll need to rotate the ring about 120°, or 1/3 of a turn. Focusing is damped well, and seems to stay put.  The lens focuses by extending the front, which adds a maximum of 37mm or 1.5″ when focused up close.  For people using this lens for real work, I’d suggest a type “M” focusing screen ($49) to make manual focusing at large apertures easier.
The lens is multi-coated and resists flare and ghosting with average results, and similar to other primes in this range.  It seems to have a pesky yellow/orange blob somewhere whenever the sun is in the image, except when the sun is dead-center, then things look just fine.  See samples below.  Veiling glare is about average, and similar to the CZ 135mm F/1.8 lens.  The lens comes with a plastic hood with some soft, felt-like material lining the inside to help reduce reflections.  Don’t lose the hood, or it’ll cost you $80 to replace (!)
Filter size is 72mm.  Sharing this size in the Sony lineup are the 20mm F/2.8, CZ 24mm F/2, and CZ 85mm F/1.4.
Normal filters, cause no additional vignetting on either full frame or APS-C systems.
Coma None.
Color shifts green at F/4.5, but looks like other Sony lenses at F/5.6 and beyond.  I’m not sure what causes this.
Bokeh is super smooth, even stopped down, but looks best wide open in my opinion, see shots below.
Color fringing.   Look for moderate amounts of axial color fringing at F/4.5-F/5.6.  This type goes away as you stop down.  I see mostly blue/purple.  Check out the crops farther down to see what I’m talking about.  Lateral color fringing is controlled well, but some does exist for pixel peepers to sneer at.
Aperture shots below.

This shot gives us a look at the two apertures built into the lens, though remember, the rear, or normal aperture will be wide open, and not visible when mounted on the camera.  The one in back is the normal aperture, and works just like a normal, automatic aperture.  In front is the 10 bladed stepless aperture, and is controlled manually.  The two do not work together, it’s either one or the other.

The second row shows the green color shift I mentioned earlier.  It’s not bad, but is noticeable at F/4.5.  It disappears at F/5.6.  I used F/6.3 in the sample because it was part of a set.

The bokeh samples in this set are comparisons to the Sony 70-200mm F/2.8 lens, which is generally considered to have a pleasing bokeh.  As you can see, the 135mm STF clearly looks smoother than the zoom lens shots, even when that lens is set to F/2.8, but this is when the background is busy and very close.  Look below for the next set which has more distance behind the subject, and is not quite as busy.  The focusing distance from the (1950s Kodak filter) subject to the busy (purple lantana) background is about 6 feet, or 2 meters.

This is the set with the longer distance background.  You’ll quickly notice there isn’t so much difference between the two lenses when compared with the 70-200mm set at F/2.8, but the 135mm STF is still the smoothest.  I show the last two shots in a larger size to give you a better idea of the bokeh characteristics, at 100%.  The Purple Bougainvillea shrub is about 12 feet (4m) behind the subject, which is the brown post, ya, a little boring, but still relevant.  I find very little difference (if any) between foreground and background blur.  Usually the foreground blur is not as good as the background blur on most lenses.

I see a small amount of pincushion distortion at close focus, which lessens slightly as you focus towards infinity.

Light fall-off or corner darkening is non-existent with APS-C cameras.

The top row at F/4.5 looks soft, but things sharpen up about a stop and a half down.  Remember, the real aperture is F/2.8 wide open, and you should keep that in mind when calculating depth of field.  The centers and corners are very close in sharpness with an APS-C camera.  The above shots were taken at infinity, and are clearly different than the center crops in the first set.  Note; before you send hate mail, yes I did take multiple sets, with focus bracketing, and the images above represent the best samples.  The hard stop at infinity focus gave the sharpest results.

How well do the tele-converters work with this lens? 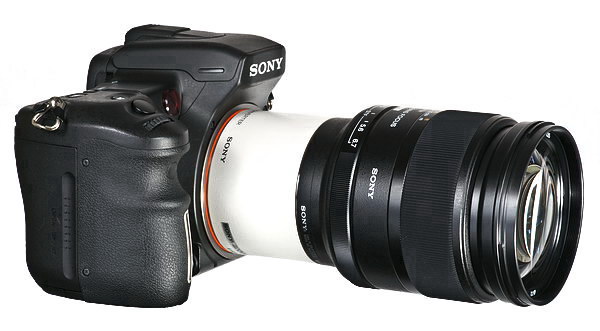 Tele-converter center crop results.
Above, I used just the Sony 135mm F/2.8 [T4.5] STF on the left, and then mounted the Tele-converters, took the shots and displayed the cropped samples on the right.  It looks like The TCs work well, showing much higher detail than the upsampled shots.  I see more axial color fringing (mostly purple/blue) when used wide open, which is F/6.3(7) with the 1.4x, and F/9(9.5) with the 2.0x.  I also see a color shift to green at the widest aperture, which was used for the TC shots on the right.  The left shots without the TCs were taken at F/8.  I’m not sure this is the best lens for using the TCs, but they obviously work.  On a side note; I find the bokeh to be relatively unchanged.
Close focus sample.
Below, click to check out the close focus shot, a 100% cropped portion (327kb) of the full image.  The sample shot was taken with the Sony A 700 12.2mp camera.  The subject is a standard US stamp, 1″x 3/4″ or 25.4mm x 19mm.  Also, note the macro shot was taken as close to the subject as focusing allowed; In this case, 26.75″ or 680mm, measured from the front of the lens barrel to the subject.
This maximum magnification shot is sharp, and has a good reproduction size of 0.25x.  There is little change in sharpness between F/4.5-11, but F/5.6-F/8 seemed the absolute sharpest apertures at close focus, so use those apertures for test charts.
My final thoughts.
The Sony 135mm F/2.8 [T4.5] STF is an expensive special purpose lens.  It has a superb build quality, and feels very nice in the hand.  It’s also manual focus only, and really doesn’t have all that much light gathering power when you consider the transmissive brightness factor.
The main purpose of this lens is to produce beautifully smooth, out of focus highlights, or “bokeh.”  It does that like no other lens I’ve ever had the pleasure of using.  I think if I bought one I’d be using it at close to medium distances, with static subjects, and using the stepless aperture at all times.  In my opinion, this lens only makes sense when used in this way.  If you want a fast medium telephoto lens, this isn’t going to be fast, as the actual brightness value is F/4.5 wide open.  It also doesn’t have AF, which is important for fast action, hand held shooting.  For an excellent medium telephoto lens get the much faster (almost 3 stops) Sony CZ 135mm F/1.8.
As I said above, if you demand an extremely pleasing bokeh, and look at your images at large sizes, this lens is worth the price.  There’re a few issues to note though; like the green color cast at F/4.5.  I don’t know what causes this, maybe the special apodization element is causing an automatic white balance issue, or is somehow causing an image processing problem.  It’s not a big deal, but is noticeable in regular screen sized shots, especially with light tones present.  The soft corners wide open with a full frame camera are a little surprising, but look fine at F/8.  There is some axial color fringing present, and can be a little strong at F/4.5.  Luckily, this kind of color fringing lessens in severity as you stop down.  The Sony TCs work well on this lens, (as far as sharpness is concerned) but you’ll be starving for light as the maximum apertures go down to F/6.3 for the 1.4x, and F/9 for the 2.0x.
With a little extra distance from subject to background, such as the second set of bokeh shots, the Sony 70-200mm F/2.8 G, and Sony CZ 135mm F/1.8 also have appealing bokeh when used wide open, and are obviously more useful in everyday situations.