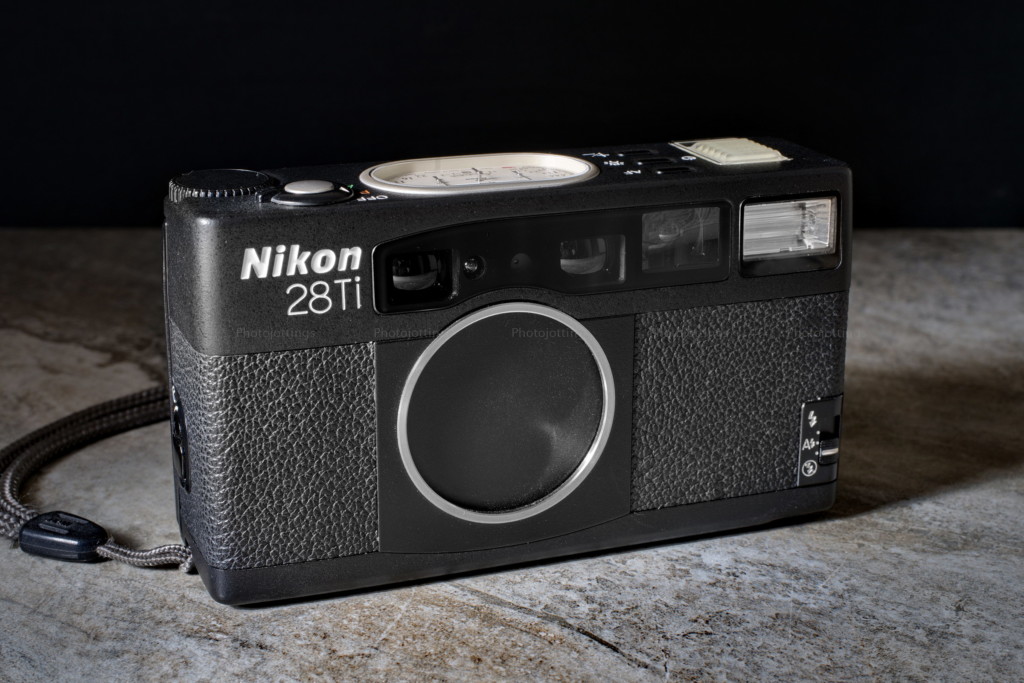 The Nikon 28Ti is a handsome, and high quality compact 35mm point and shoot camera, and the younger sister to the excellent Nikon 35Ti.  As the name would suggest, the Nikon 28Ti has a 28mm F/2.8 wide angle lens, with the ‘Ti’ indicating it’s made out of titanium, and as far as I know, all are finished in matte black.  This wide angle version came out in 1994, and just like the 35Ti, was very expensive for back in the mid 1990s.  In a 1995 Popular Photography magazine ad, the suggested list price was a whopping $1220, or almost $2000 today!

The Nikon Ti’s, along with Minolta’s TC-1, the Contax T range, Leica Minilux and to a lesser extent the Fuji Klasse and Ricoh’s were ’boutique’ type cameras marketed towards the affluent novice and traveler.  Common features included excellent build quality (the use of titanium was prevalent), smaller size, along with a premium autofocusing lens, program mode, aperture priority mode and exposure compensation.  Unfortunately, being compact with retractable lenses, there was no easy way to add filter threads and a hood to the lens, so that was left out, at least on the Nikon Ti’s.  (If you really need to use filters, check out the Contax T3).  Maybe the designers thought no one would care about those things with a pocket camera, who knows?  These battery powered cameras are loaded with circuit boards, electric motors and switches that help the novice take correctly exposed and focused images; unfortunately, when these things go bad now, your cool little pocket camera becomes an expensive paper-weight, so be careful before deciding to buy a camera like this.

If you’ve read the 35Ti review, or already own one, the 28Ti is basically the same, in fact, the lenses are the only real differences between the two models; so with that said, I’m going to use some portions from the 35Ti review for the 28Ti, and fill in the differences where appropriate.

With the introduction out of the way, let’s check out the Nikon 28Ti specs.

Price; according to a 1995 Popular Photography magazine article; the original suggested retail price was $1220, and street prices were around $950-1000.  Current eBay prices range anywhere from $400 to $800 for a good working model, or even more if it’s ‘mint’ and comes with the original box etc.

Build material; appears to be mostly metal (titanium) with a quality fit and finish.

Viewfinder; bright and clear, but frame lines are hard to see unless you’re in bright light; however, a red light comes on in low light when you half press the shutter button.  It also has auto parallax correction using different frame lines for close focus, slightly longer focus, and longer distances; plus panorama mode too; all appearing magically when you focus within those distances.  More items in the viewfinder are the shutter speed, metering mode, EV compensation active only, not set value, flash indicator, and ‘H’ for too bright warning, or ‘L’ for not enough light.  You can customize the viewfinder to your heart’s desire if you feel like screwing around with the tiny buttons all day.

Power; uses one CR123a 3V lithium battery.  Expensive in the grocery store, but about $2-3 a piece at these shops; B&H, Amazon, eBay.  Manual states the battery will last for up to 18 rolls of 36 exposure film with half the shots using flash.

Accessories for this model;  -1 diopter built in the camera, but +0.5 eyepiece is available according to the manual; rarely listed on eBay.

Crippling features and omissions; buttons are too small, and are almost useless for people with large hands.  No filter threads or hood.

Go here to see the owners manual for the 35Ti, which is mostly the same as far as operation is concerned.  Make sure you tip the webmaster.

Product shots with descriptions. Click pictures for larger versions.  Note: new product shots added 12/1/18; I didn’t like the blue background on the old ones. 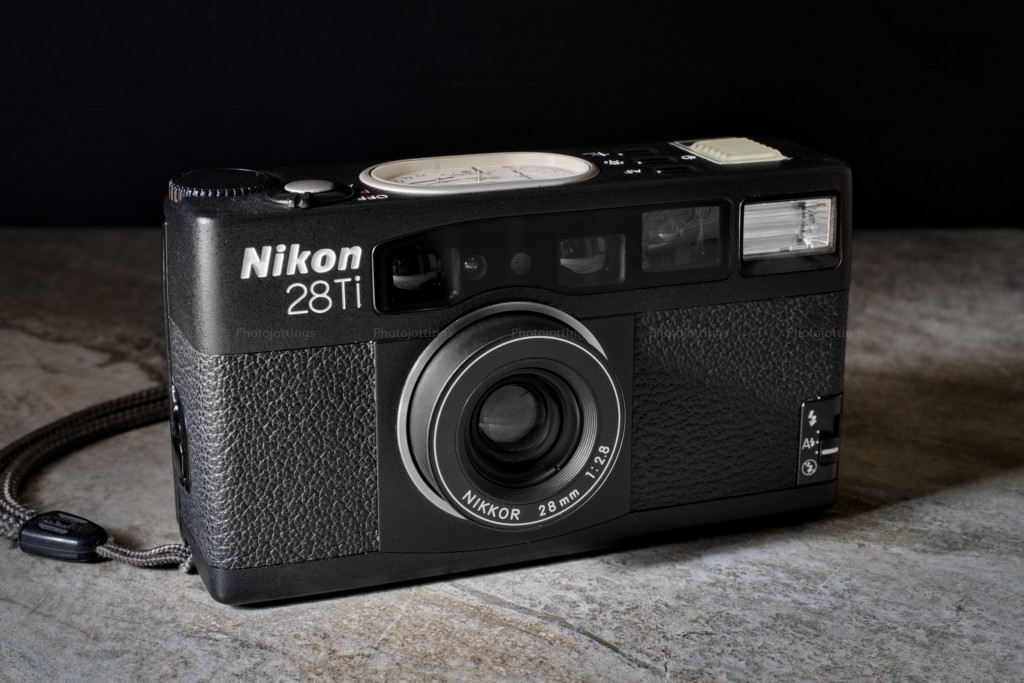 Lens extended and ready to shoot.  Tiny flash on and off button on right side in picture. 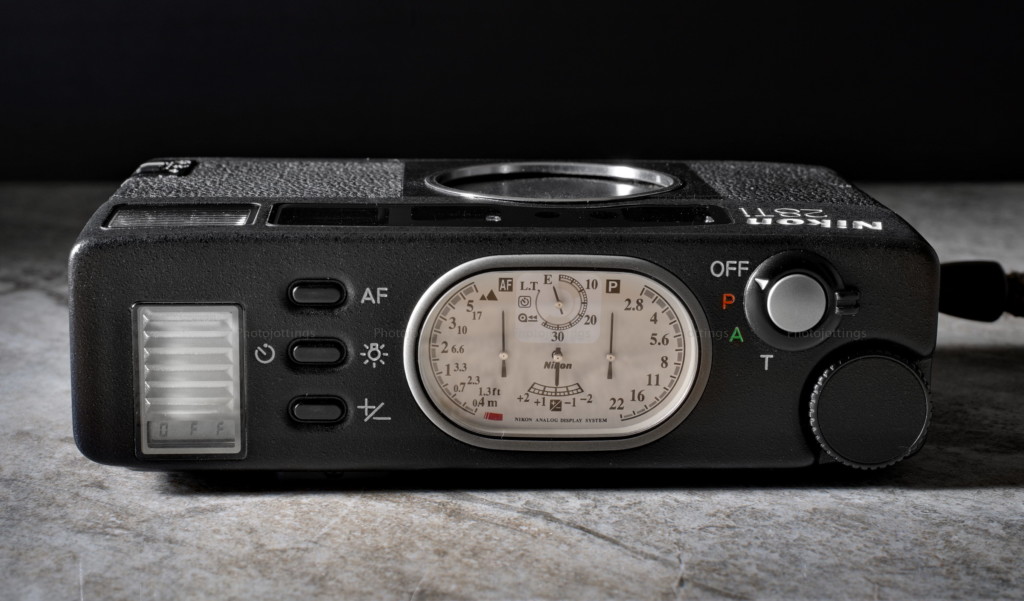 Top cover with lots of buttons. Tiny LCD on left, above that is the grooved window for illuminating the viewfinder info.  Next are the AF, timer/dial light, and exposure compensation buttons, analog dials for focus distance, aperture timer and exposure compensation. Shutter button surrounded by switch for ‘P‘ program mode, ‘A‘ aperture priority mode, and ‘T’ time mode. Wheel on lower right is for adjusting dials. 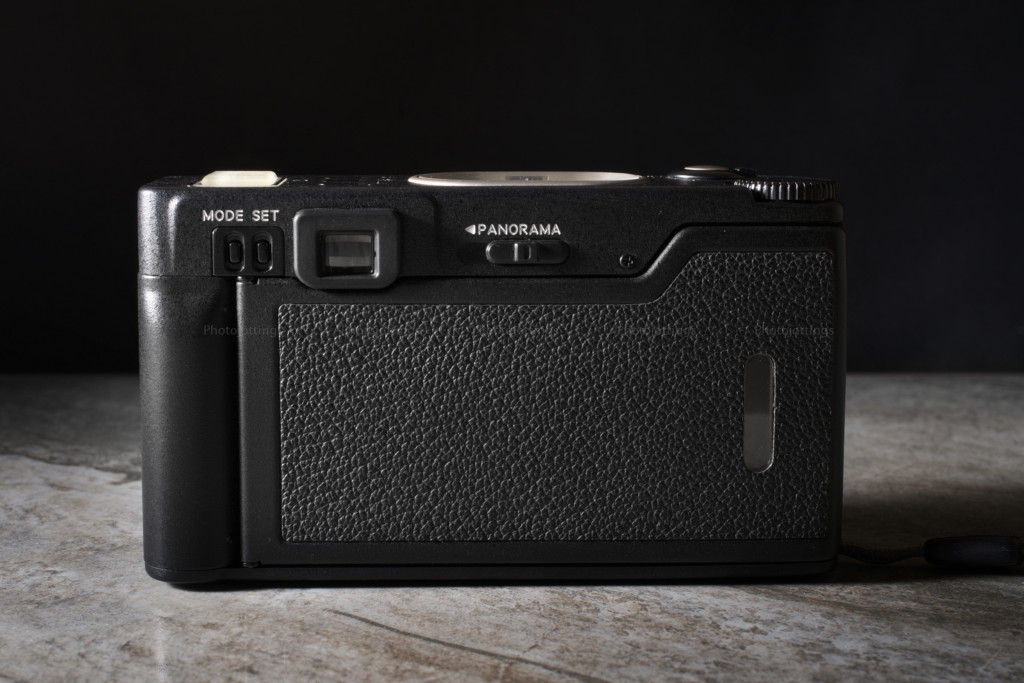 Tiny mode and set buttons that are hard to push, good luck setting things up, I gave up after the first hour of fooling with it. Next is the viewfinder, which is bright and easy to see through. To the right of that is the dumb panorama button that chops off the upper and lower parts of the image, tape this over when in the ‘off’ setting to the right.  The window to the right on the back is for seeing the type of film you have loaded; much like a film reminder slot. 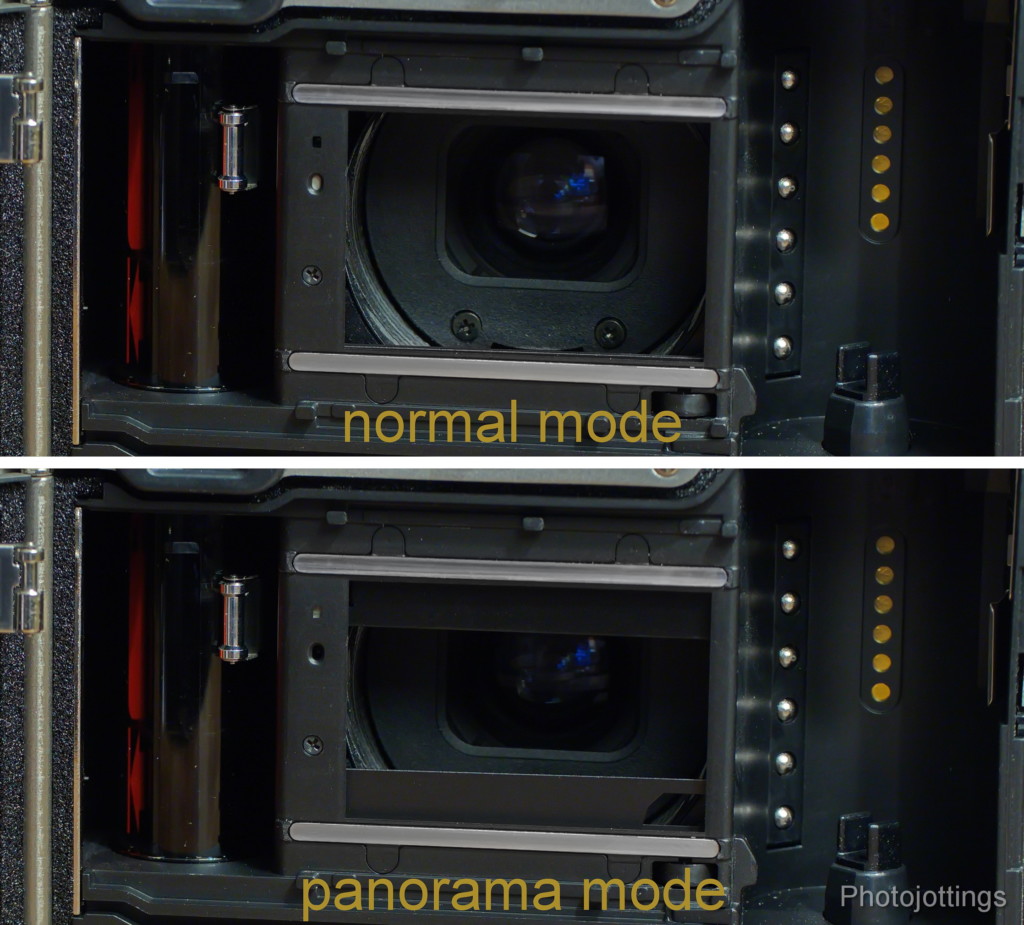 Panorama mode: metal curtains extend inward when you move the switch to the left.

Film goes in upside down (right side) as compared to most 35mm cameras; back opening tab on right side. 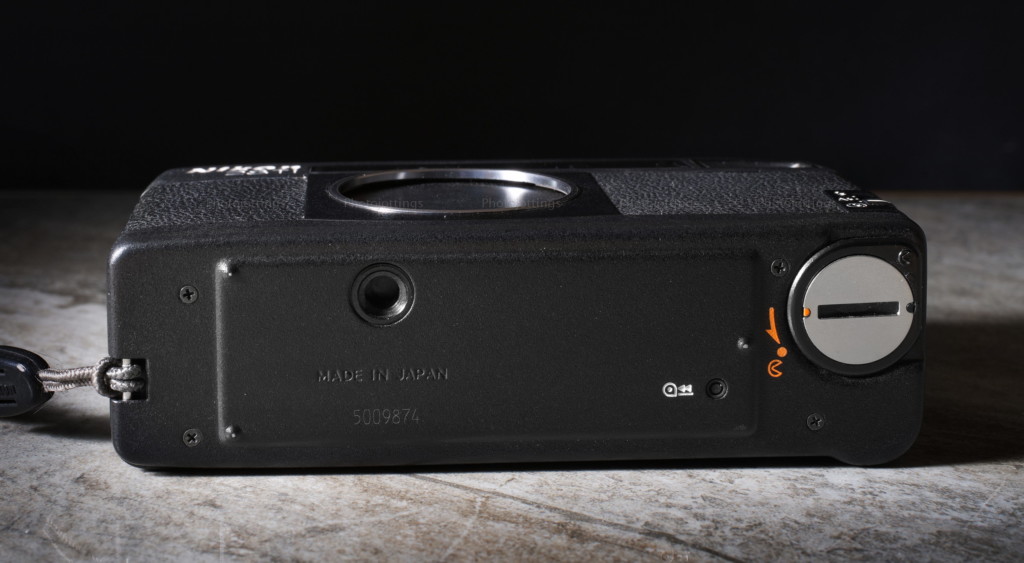 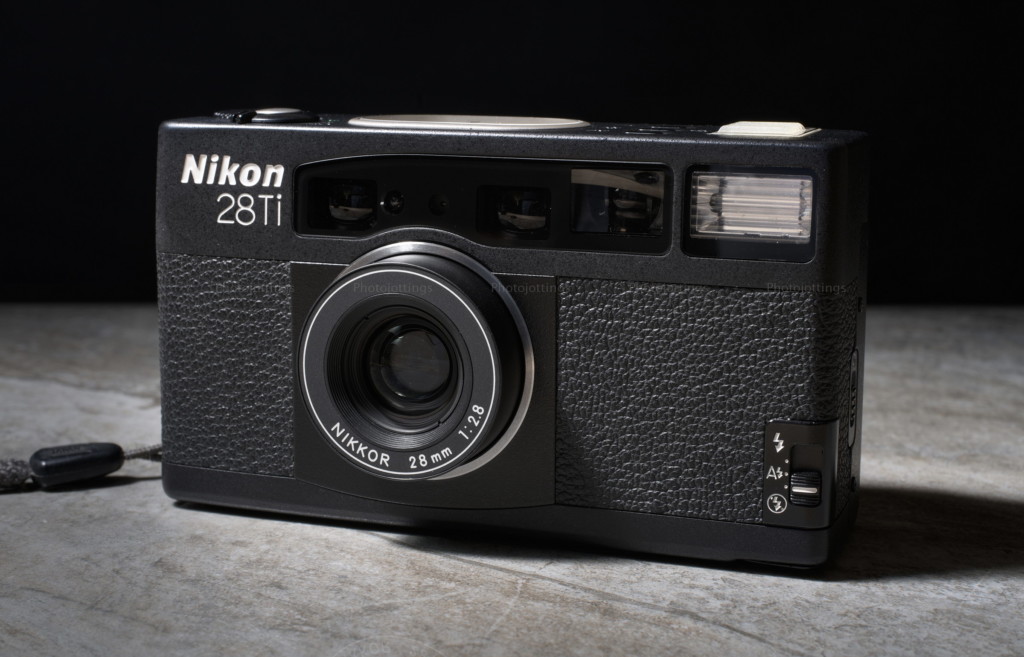 The flash switch is much improved on the 28Ti; you get a single sliding switch which can be set for flash on, off, or auto mode.  Red-eye reduction sliding switch (just visible in this view) around the corner from the flash on-off switches.

All samples below are 4000 pixel on the long end.  Scanned on Nikon Coolscan ED 9000 unless otherwise stated. 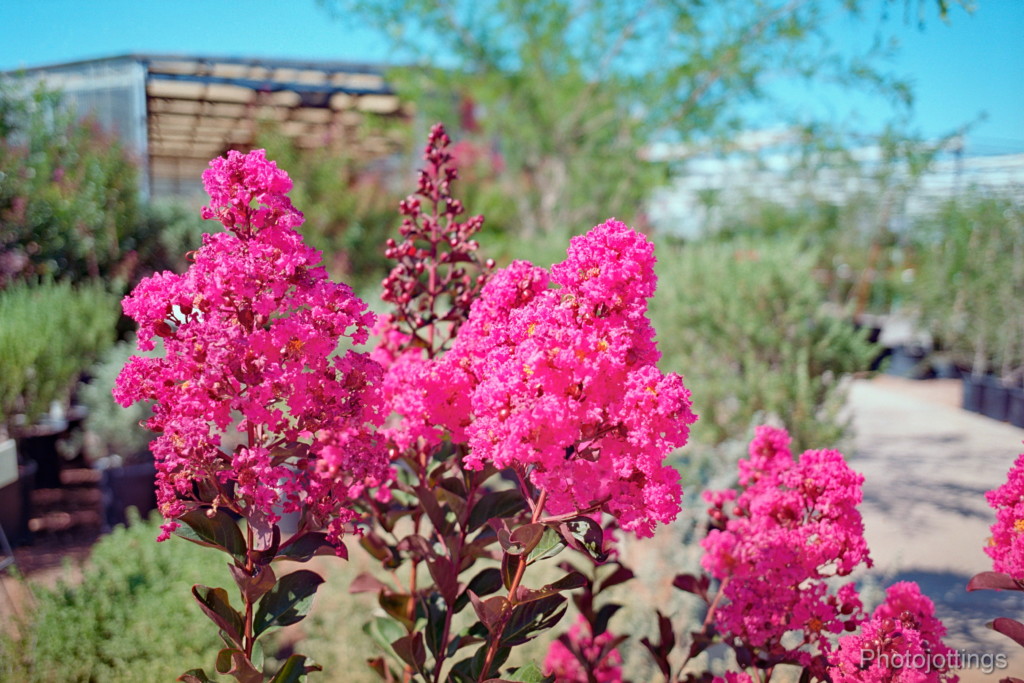 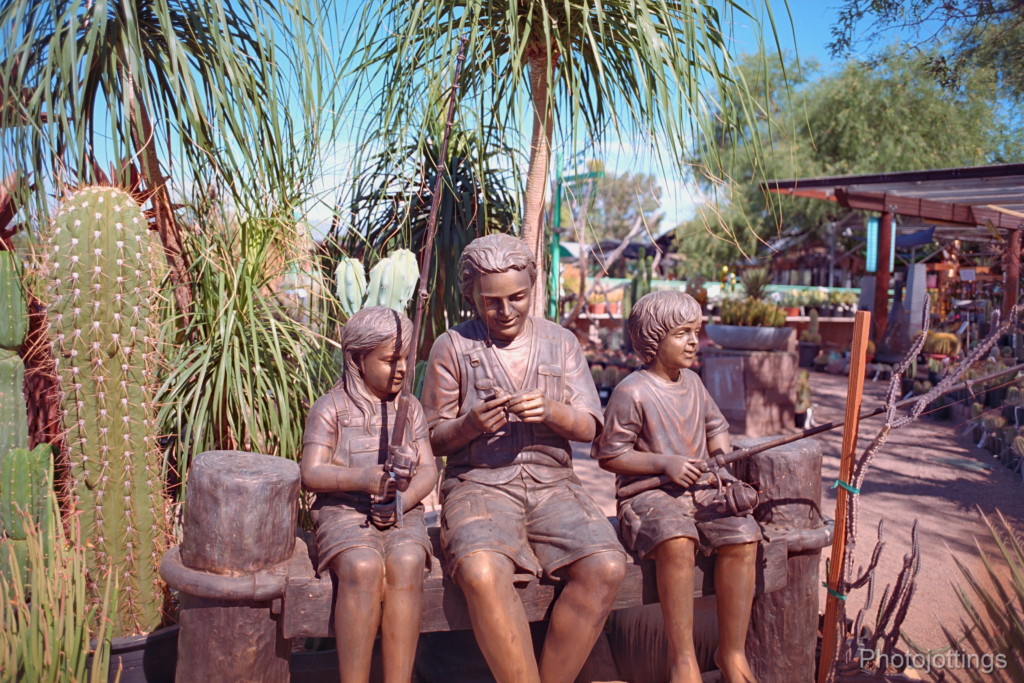 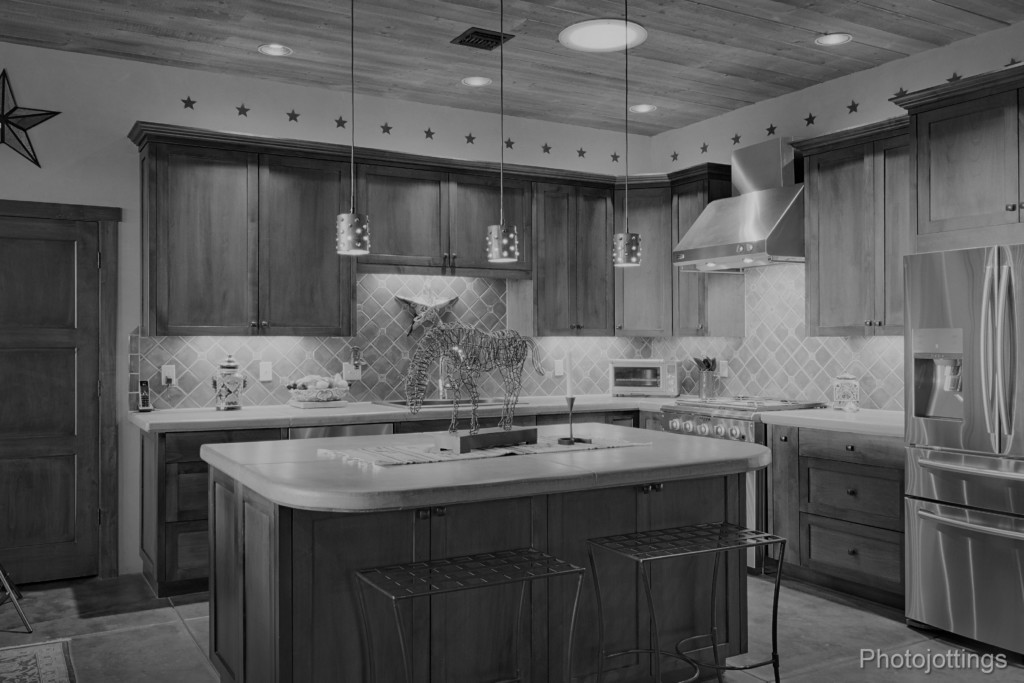 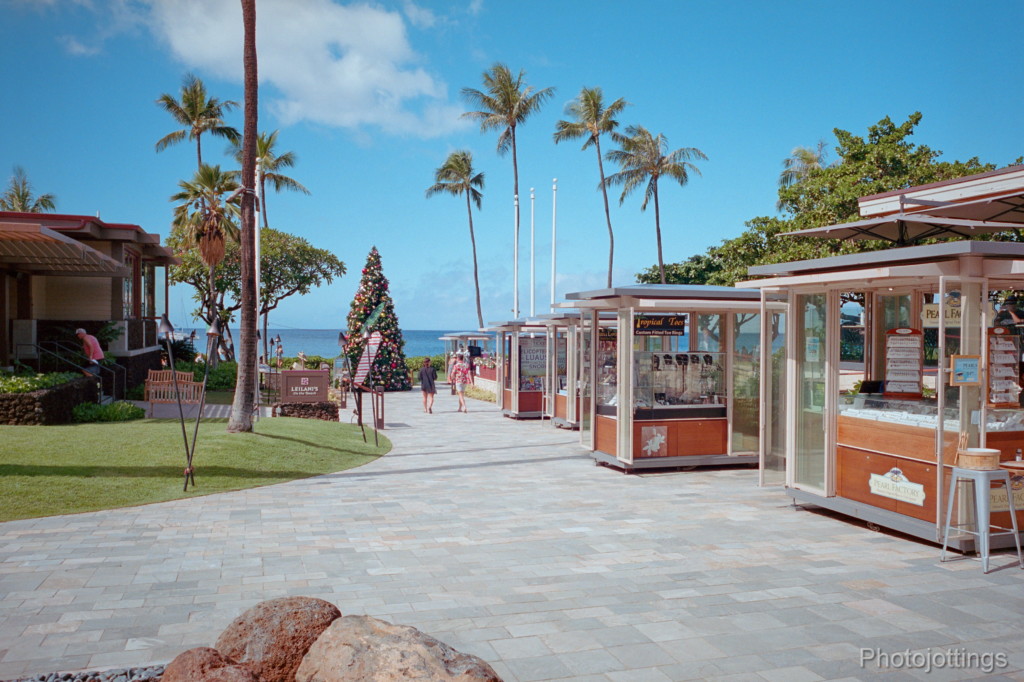 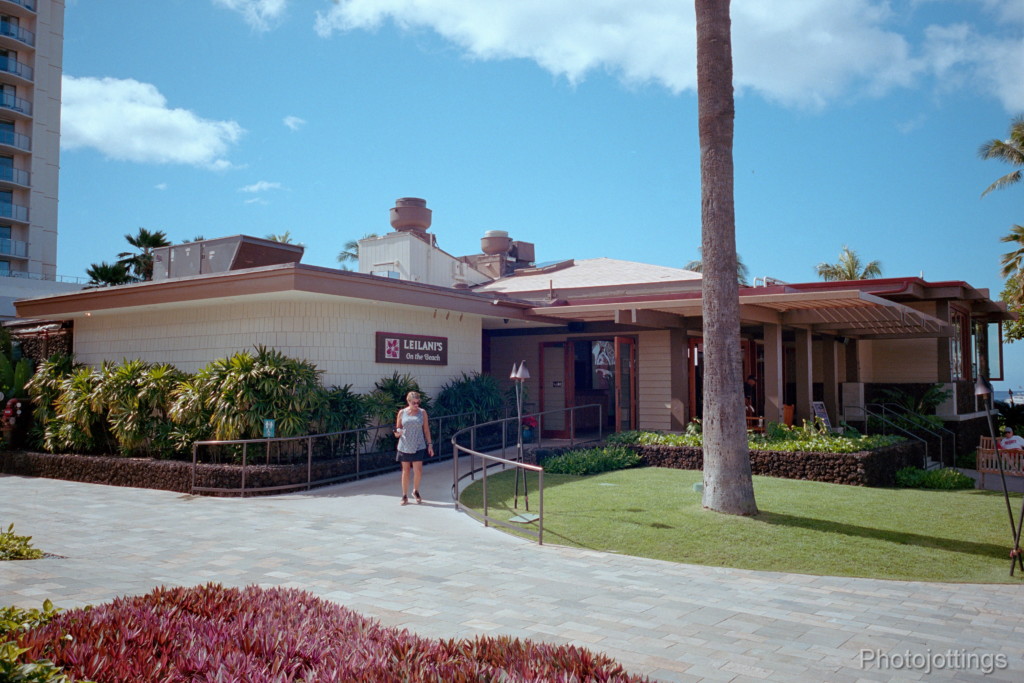 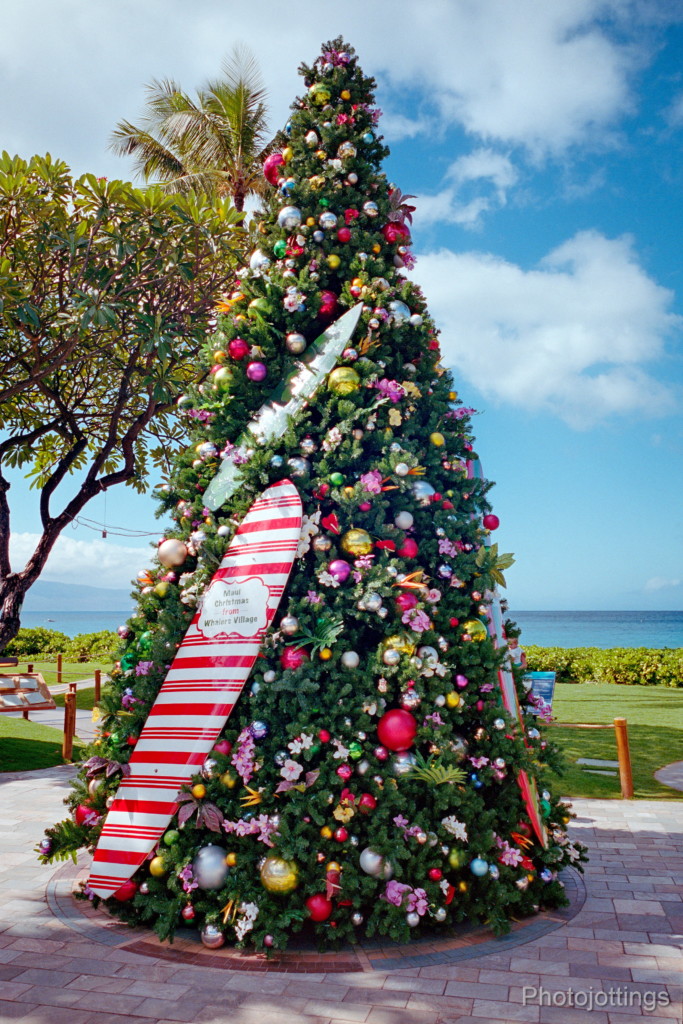 It’s beginning to look a lot like Christmas—no it doesn’t, not with Candy cane surfboards and tropical flowers on the tree.  F/8.  Kodak Portra 400. 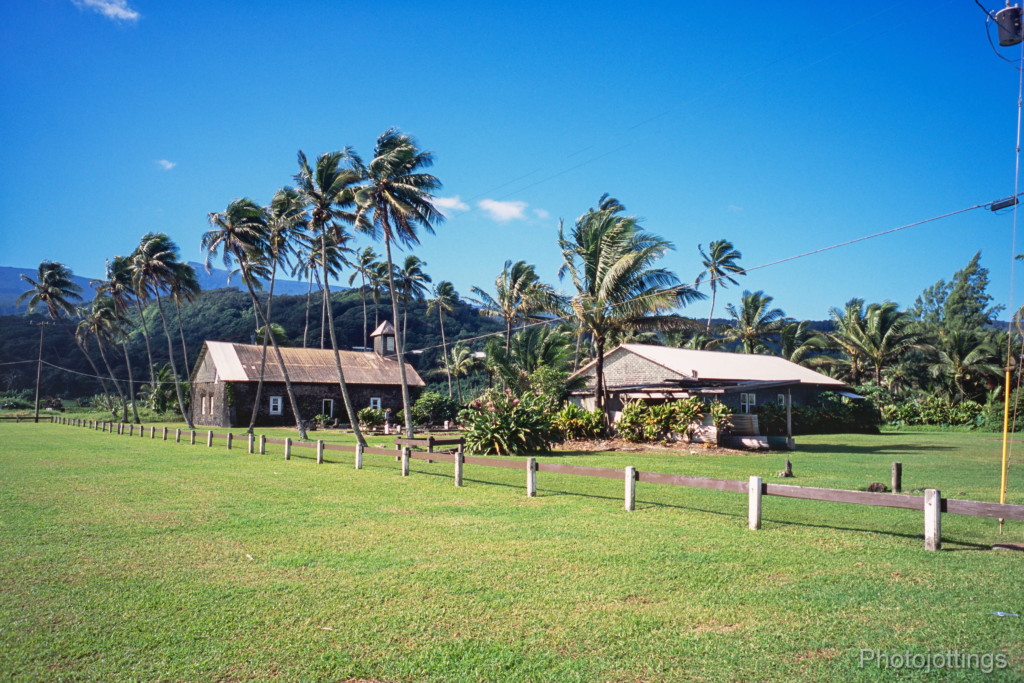 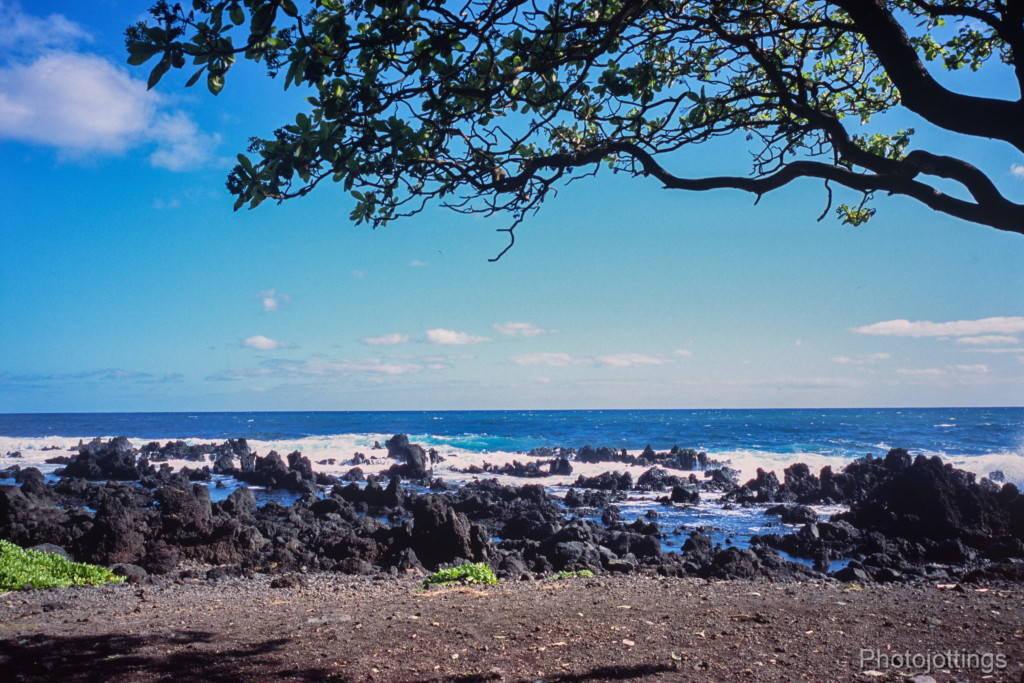 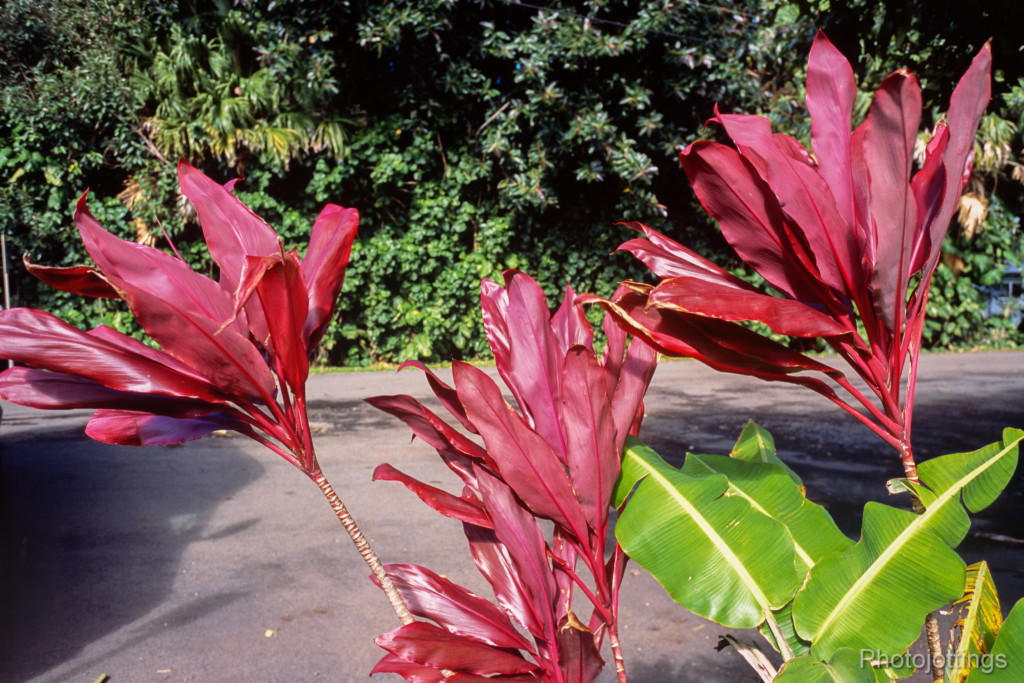 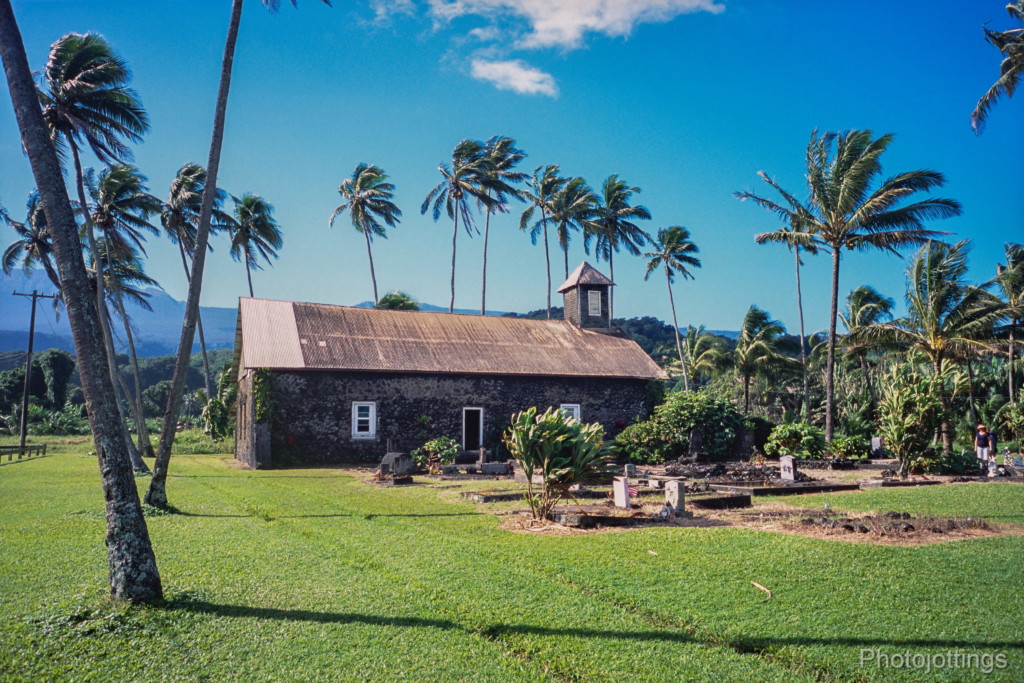 Use notes, and conclusion.

The following paragraphs are similar to the 35Ti review, but the performance of the 28Ti applies here to.

When first checking out your Nikon 28Ti or 35Ti, take note: when I received my camera from halfway around the world, I noticed the aperture dial could not be manually set all the way to F/2.8.  It would go from F/5.6 to past F/22.  The camera worked fine in program mode, but when I set the aperture manually in ‘A’ mode, the shutter speeds seemed way to slow for the indicated aperture.  It took me a while to figure out the problem, and here’s what happened; during shipping the box probably got dropped or was roughly handled and the shock caused the dial to relocate to a position other than its original; it was actually two stops off the reading, when set to F/8, it was actually at F/16!!  So I needed to reset the aperture dial using the ‘analog display reset’ code.  Go here to see the owners manual, page 83 will tell you how to do it.  Make sure you tip the site owner.

One other issue I’ve run across: the camera won’t power on, but the battery is definitely good; it might be that the battery cover needs to be turned very slightly back after turning it all the way over to the closed position.  Maybe the contacts need to be re-sprung back into the proper position?

The Nikon 28Ti exposes very accurately with 3D matrix metering, and focuses dead-on with the 541 step IR focus system.  Although the camera can easily get perfect results using print film, many cameras have trouble metering for transparency or ‘slide’ film.  Fortunately, the Nikon 28Ti exposes slide film with a high degree of accuracy, and that’s the type of film I use most of the time, however, I usually dial in -1/3EV or -2/3EV, depending on the situation to protect the highlights.

To sum up the lens performance; sharp across the frame at F/2.8, with good contrast along the sides.  Not much difference at F/4.  At F/5.6 the lens is very sharp, even on the extreme edges, with F/8 about the same.  As you stop down to F/11, dulling diffraction comes into play.  Light fall-off is strong in the corners, but the transition is very gradual towards the central area, and is not so noticeable.  Color fringing is well controlled, but I do see some magenta tinges around extreme high contrast areas at all apertures.  Background blur or ‘bokeh’ is a bit busy, especially along the sides, although at 28mm there isn’t much blur visible when stopped down unless you’re close to the subject, see the samples at F/2.8 above.

With a wide angle 28mm lens, you’re covering a lot of area, and there is only so much information that can be extracted from a small 24x36mm piece of film; so if you’re used to a 35mm or 50mm lens, you might conclude the 28mm lens is a bit dull, but that’s not the case, it’s just the nature of the beast.  Try using a 16mm, or even worse, a fisheye lens and see how much sharp detail you get out of those—and it’s not much!   Real resolution depends on the type of film and scanner.  I’ve used the Nikon Super Coolscan 9000 ED at 3000dpi, for everything here; that gets all the info out of them, and with cropping and leveling, you’ll wind up with approximately 4000×2667 very sharp images, which is plenty for standard magazine covers or even 11×14 or larger prints.  You’ll do much better with high contrast, high resolution film,  such as Adox CMS 20 II, but that’s a really slow film and tough to shoot, even worse than slide film.

The only real ‘downer’ about this camera is that it won’t take filters (or a hood, but I can live without a hood and just use my hand to shade the sun).  Trying to hold up a small filter to the lens doesn’t work, trust me, I blew a roll of film trying. It was a graduated neutral density filter, and I was hoping to get some big puffy cloud detail without under exposing the landscape.  Switch to print film for that type of situation.  Oh well, one can’t have everything in a pocket camera right?

So two thumbs up for the Nikon 28Ti, I really like it, maybe more than the 35Ti just because of the wider coverage.

That’s it for this review, check out the Nikon 28Ti here, and thanks for visiting!