Konica Minolta AF 17-35mm F/2.8-4 (D) Review - Photo Jottings
Here’s a brief look at the Konica Minolta AF 17-35mm F/2.8-4 (D) lens.  Scroll down for the review.
Requisite product shots.
The Sony A700 and Sony A900 were used for this review.  Go to the bottom of the page for full frame results.  For a better understanding of my review methods and terminology, go here.
Check out the comparison review which includes this lens.
The Konica Minolta 17-35mm F/2.8-4 (D) is very similar to the KM/Sony DT 11-18mm F/4.5-5.6.  They’re both about the same size, same weight, same basic front element and filter, and they perform alike.  The barrel extends out 1/4″ (6mm) when zooming.  This lens can be used on a full frame or film camera, unlike the 11-18mm which is for APS-C cameras only.  The focal length scale is marked at 17mm, 20mm, 24mm, 28mm and 35mm.  The lens is matte black, and looks to be made of a mixture of metal and plastic, with a good build quality.  It has no focus distance window but has the distance scale in FT/M.  It has a metal mount.  The lens says Japan so I assume it’s made in Japan.  The “D” means it has a distance encoder for ADI flash metering, most Sony lenses have this, but not all.  Konica Minolta claims the use of aspherical and AD glass in the lens, no word on how many each.  I believe Tamron made this lens for Konica Minolta.
Filter size is 77mm, which is the same as the Sony 70-200mm, 24-70mm, CZ 135mm, and 11-18mm.

Zooming.  Nice and easy, just right.  The focal length marks don’t correspond exactly to the index marks in the EXIF data.  If the lens marks read close to 29mm-30mm, the EXIF data would show 28mm etc.  No big deal.

Focusing.  Auto-focusing is pretty quick and accurate, manual focusing is OK to good.  These less-expensive lenses aren’t really made to be manually focused, especially on a wide angle.  There is sufficient rotational movement (1/4 turn) for an accurate focus though.

Coma.  Moderate to strong with the aperture wide open, at both ends.  Not really noticeable at F/5.6.
Color looks the same as the newer Sony lineup.
Lateral color fringing.  Control here ok, not great, very similar to, and slightly better than the KM/Sony 11-18 DT lens.  Stopping down does nothing.  Pretty common results among super-wide zoom lenses.
Bokeh.   Not too bad in the centers, but on the image periphery it can be harsh.  I prefer the stopped down look as it is more consistent throughout the image.  Overall, smoother towards wide angle.  See crops below.
Aperture/focal length guide for the Konica Minolta 17-35mm F/2.8-4 (D)
The numbers above are pretty normal, the overlapping 28mm on the end is also normal and depends on tiny rotational movements of the zoom ring.
Lens distortion below.

Distortion.  Moderate to strong barrel distortion at 17mm, by 22mm it’s flat, then pincushion starting at 26mm, though pretty mild to 35mm.  Very good from 20-30mm.

Example of ghosting below

Lens Flare/Ghosting.  The KM 17-35mm F/2.8-4 does a decent job with flare, but ghosting can be strong at times around 17mm, with a long line of green blobs from the sun.  The F/8 shot above was taken in the morning, with the sun just out of the frame.  Veiling flare is controlled well.  F/2.8 shots were very similar to F/8, except the green blobs are more diffused as you open the aperture.  The lens comes with a plastic petal type hood, but doesn’t help with the problem above.  Use your hand for much better control.  Do not use this lens if you like to take pictures with the sun close to the center of the image.  Dead center shots look terrible, see below.  Things look marginally better as you zoom in.
Random samples. 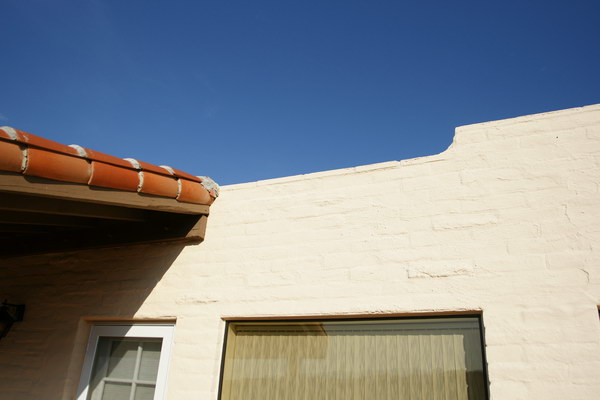 When you look at the 17mm test charts above, light fall-off appears moderate, stopping the lens down a stop or two eliminates most of the issue.  There’s an overall darkening of the frame at 35mm and F/4, but one stop down and it’s mostly gone.  You can also see by the real picture directly above that Light fall-off is not really noticeable, a good reason not to trust test charts.
Next we’ll check out the center sharpness.

The centers using the usual US stamp.

The 17mm centers on the Konica Minolta AF 17-35mm F/2.8-4 are pretty sharp wide open, but there are slight benefits to stopping down.  F/5.6-8 is the peak of sharpness when focusing close.  F/8 up -close doesn’t show any sharper than F/5.6 in my opinion.  The real centers at infinity focus appear sharpest at F/8.  The postal stamp shows little difference between F/2.8 to F/5.6.
Corner sharpness.

US stamp corners.
The US stamp corners show a big improvement at smaller apertures, peaking at F/8-11, but real shots are a bit less dramatic, but worth noting anyhow.

Next we’ll check out the 35mm center sharpness.


The centers using the usual US stamp.
The 35mm centers are nice and sharp wide open at F/4, actually falling off at one stop down, but not by much as you can ascertain from the image crops above.  Very good performance here.  The real centers showing no difference except DOF, but the cactus is the subject, not the wall in the background.  The stamp crop sharpness difference is tough to make out too.  Again, that’s good.

Below, check out the maximum magnification sample.  This shot is a 100% cropped portion of the full size picture.  The sample shot was taken with the Sony A 700 12.2MP camera.  The subject is a standard US stamp, 1″x 3/4″ or 25.4mm x 19mm.  Also, note the macro shot was taken as close to the subject as focusing allowed; In this case 6″ (152mm), measured from the front of the lens barrel to the subject.

This isn’t the best lens for close-up type shots, but it actually produces a decent reproduction ratio, and a sharp one too.

Now for the conclusion.

The Konica Minolta AF 17-35mm super wide angle lens turned in a pretty good performance, especially for $300.  It’s really more appropriate for a full frame camera.  The APS-C equivalent is 25.5-52.5mm.  Let’s look at the high points.  It’s fast wide open, and pretty sharp, and the corners look good a couple stops down.  Cranked out to 35mm, the centers are sharp even at F/4, though the corners benefit from closing the aperture by two stops.  A couple of downers are; distortion is about average for a super wide on an APS-C camera, and color and contrast are lacking compared to other full frame super-wide zooms, though you’ll only see this by comparing other lenses using 100% crops—see comparison review.  CA is a about average for a super-wide zoom, but only noticeable is you’re looking very close.

Full frame users; this lens is very inexpensive for a super-wide, and will perform nearly as good as much more expensive lenses.  See the super-wide zoom comparison page.
So who would buy this lens?  This might be a very economical super-wide choice for people with a film or full frame digital camera, it performs similarly to the Sony 16-35mm F/2.8 when stopped down some and viewed at normal sizes.  If you have an APS-C Sony, and don’t plan on upgrading to a full frame, I’d just get the more useful 11-18mm F/4.5-5.6, or the Sigma 10-20mm F/4-5.6, both reviewed here.