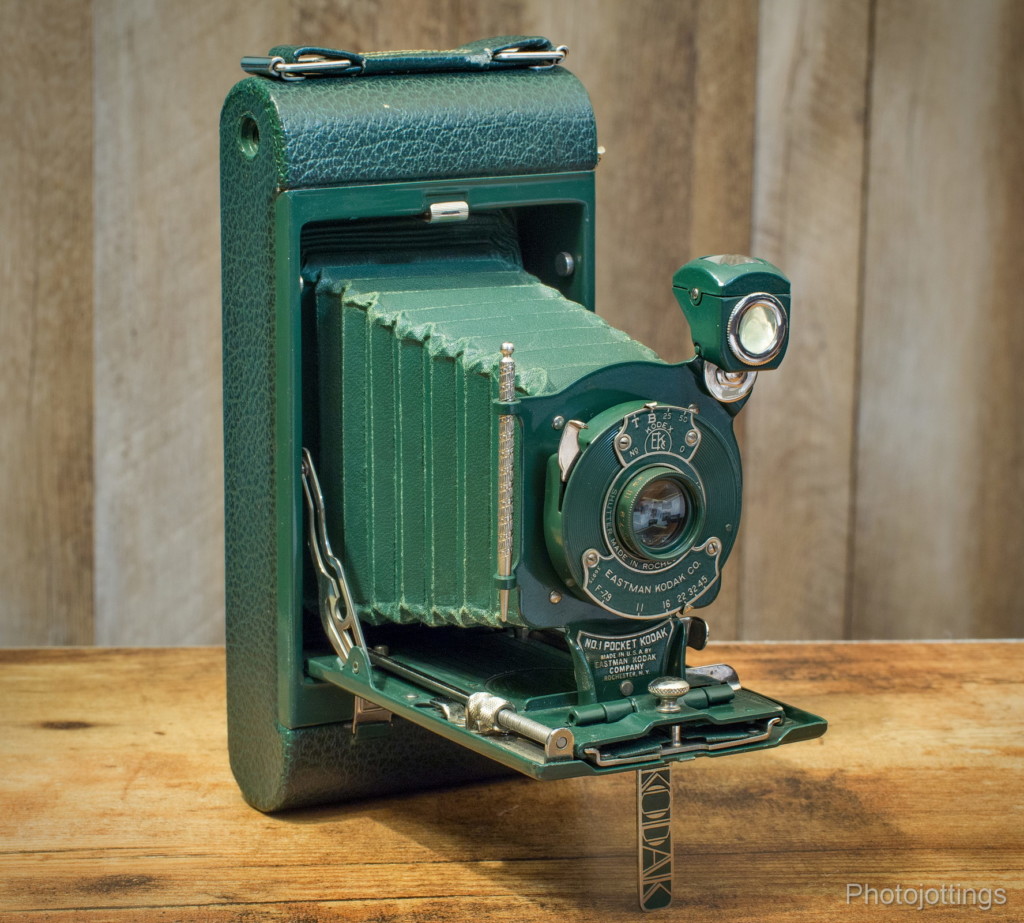 Check out the little No.1 Pocket Kodak, this model is triple green; metal trim, bellows, and outer cover.  Not only is the camera green, so is the box and carrying case!  If you don’t fancy this John Deere green hue, you could also choose brown, blue or gray.   This camera was marketed towards people that wanted a bit more than the mundane black on black camera that millions of others already had, but didn’t want to spend a lot of money, and had little experience in taking pictures.

Our colorful review camera for today was manufactured around 1930, give or take a year, during the waning period of the Kodak ‘Autographic’ film era that ended about 1932.  It’s a small camera, but not really lightweight, and certainly not something that you would put in your shirt pocket.  Kodak made ‘pocket’ cameras that were quite a bit smaller than this one, and others that were huge, and would not fit in any clothing pocket that I’ve ever seen!

The old No. 1 Kodak takes 120 film, which is still widely available today.  Other features include adjustable aperture and shutter speeds, thumb screw slide focusing, plus ‘time’ and ‘bulb’ mode.

Due to the bad bellows on this camera, I only was able to take a couple of shots by bagging it, (see picture below); so I’m short on actual test shots. I could replace the bellows, but it would destroy the look of the camera, and lower the value too.  BTW, if you see one of these colored cameras with a black bellows, it means it has been replaced.

Would you like to see what’s possible with a camera manufactured during the era of prohibition?  Read on!

Price; originally around $18.00 new.  Current eBay prices range anywhere from $75 to $350 for the green model  depending on condition.  My camera is in very good condition, and has the achromatic lens, which was an upgrade, along with the two speed shutter. I think I paid $200+ for it a few years ago.

Prints; originally about the same size as the negative, 2¼ x 3¼, all black & white of course with a white border.  Good film and proper technique today will make very sharp 12×18″ or larger prints.

Lens; Kodar F/7.9, glass achromatic triplet.  Focusing is done by moving the thumbscrew, which in turn moves the entire lens and shutter combination.

Features; two tripod sockets, a vertical and horizontal stand for keeping the camera level on a flat surface.  Viewfinder has two masks, one for viewing horizontally, and one for vertical orientation.  Autographic film compatible using door on back of camera, and stylus stored along side the lens, see picture above.

Accessories for this model;  most likely a yellow filter, and maybe a portrait and close-up filter; I’m not sure what size was advertised.

Crippling features and omissions; this was a budget model, and the shutter speed only goes to 1/50 second; that was ok for back in the day of slow film and small prints, but that may be too slow to avoid camera shake, especially when scanning and viewing your images on a computer screen.  Also, the cheap, but cool matching color cloth bellows didn’t last long, and were full of holes in a few years. I’ve never seen an original cloth bellows that was still good today, but many leather type bellows hold up well, and are still usable today.

Good features; Two 1/4″-20 tripod sockets that you’ll need if you shoot at small apertures; and a cable shutter release for the same reason; low shutter speeds. 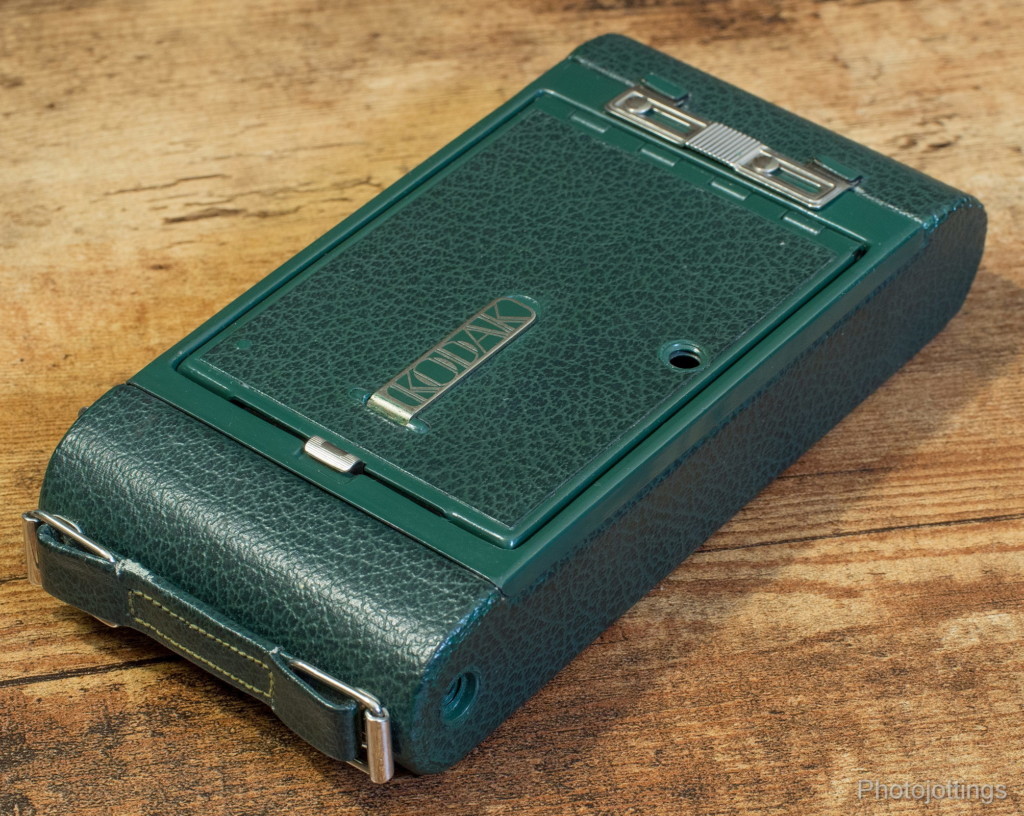 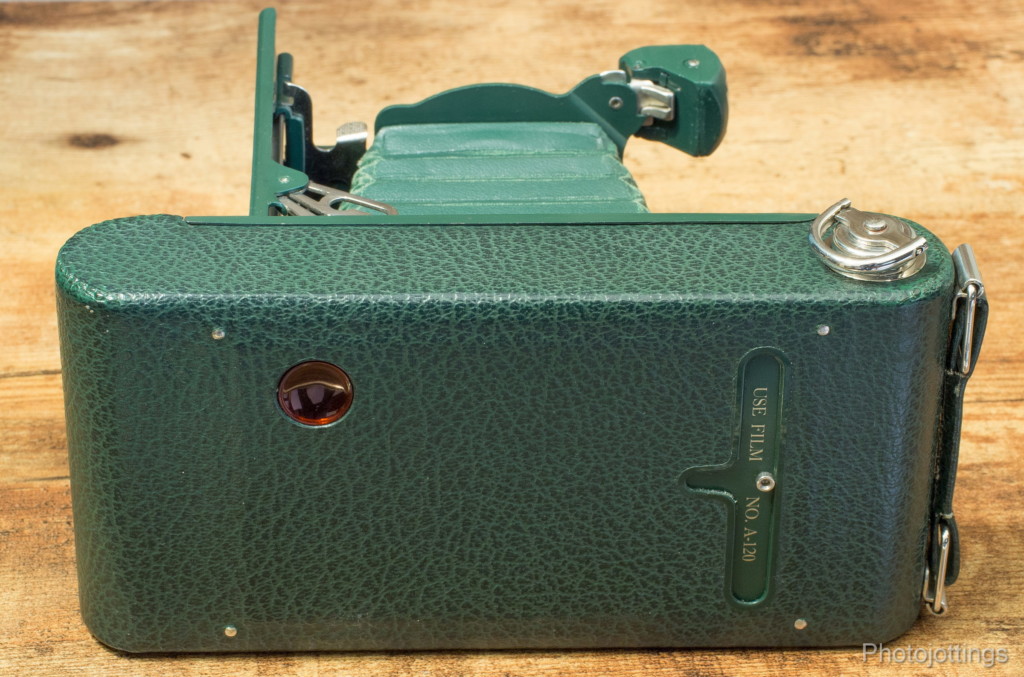 The back of the camera shows the red window for seeing the shot number on the film backing paper.  The long slot is for recording information on Kodak’s special Autographic film: to do that you use the included stylus to move the ‘door’ down and out of the way, and write your message or shooting data in the area of the slot; and then hold it up to the light for a moment and allow it to ‘burn’ in.  The chrome winding knob is on the top right; it should only turn one way, if it turns both ways, the gears are stripped, but it should still be usable. 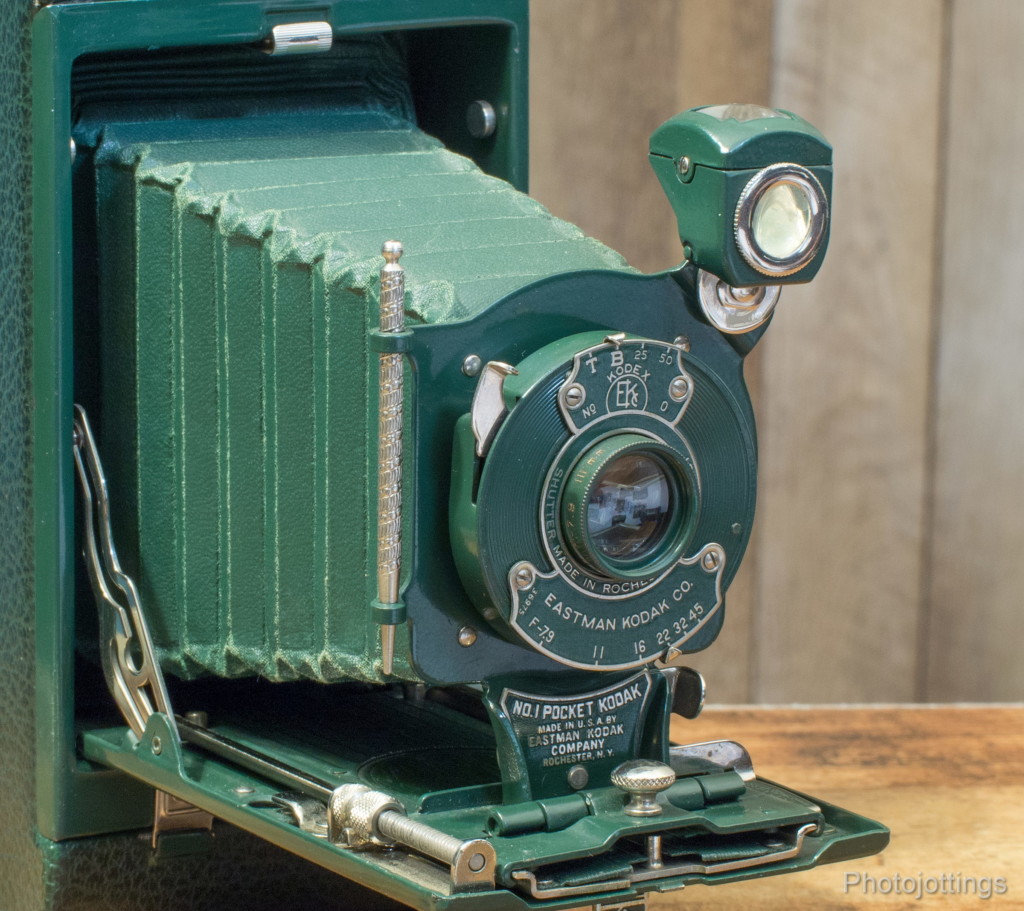 The silver pencil shaped stylus is stored in the front standard through two rings.  The shutter button is the flat silver lever at 10 o’clock; it operates from a simple press and release action.  Thumb screw focusing on the right as you hold it, the focusing scale (not seen) is on the left side marked in both feet and meters.  The viewfinder can be rotated to match the shooting position.

The camera comes apart using a slide lock. The film is loaded at either ends of the back 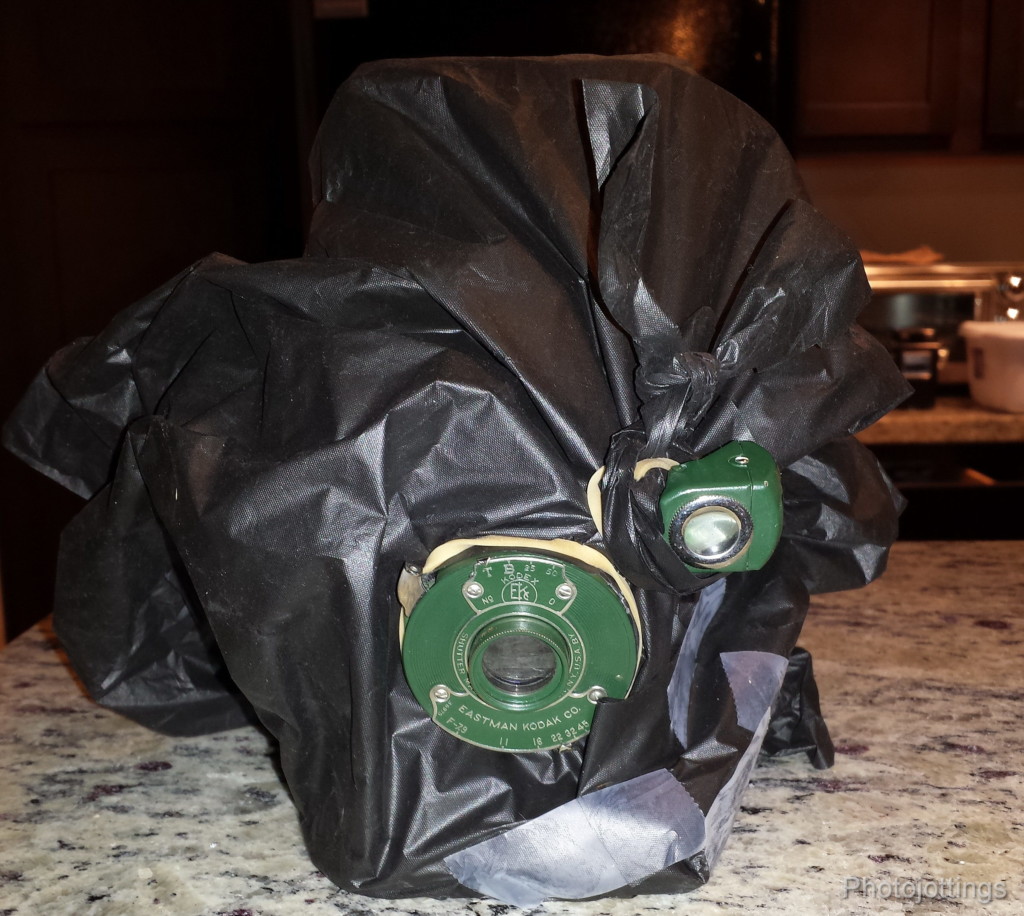 Since the bellows was full of holes, I had to test it out by bagging the whole camera, and it’s really hard to shoot in this condition, but it does work. 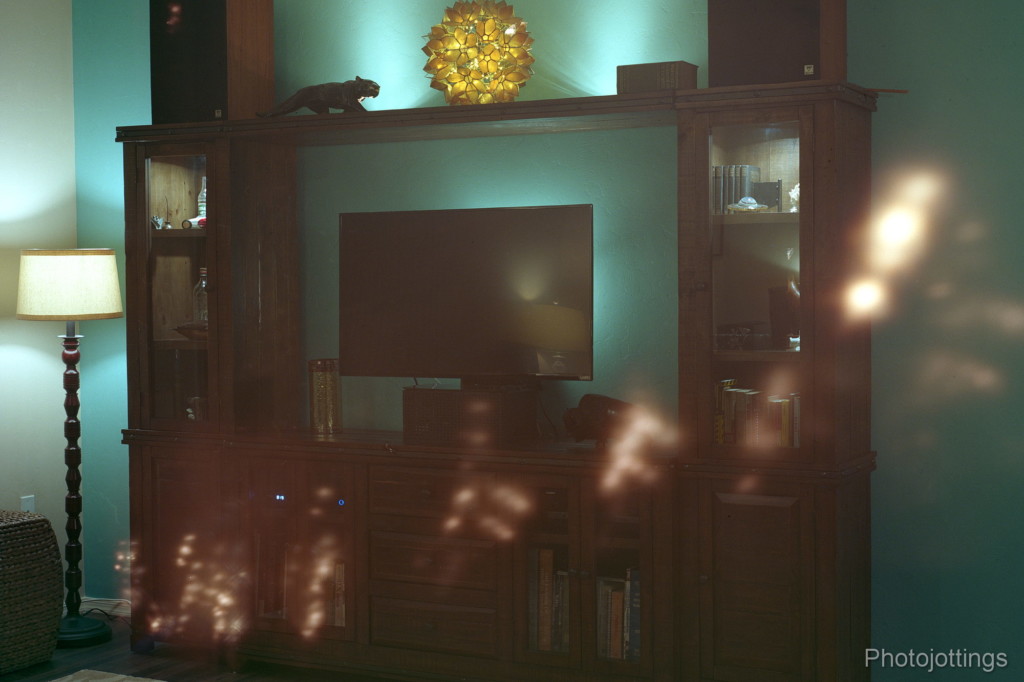 This is what you get when you take pictures with a bad bellows; it shows far worse outside in bright light. 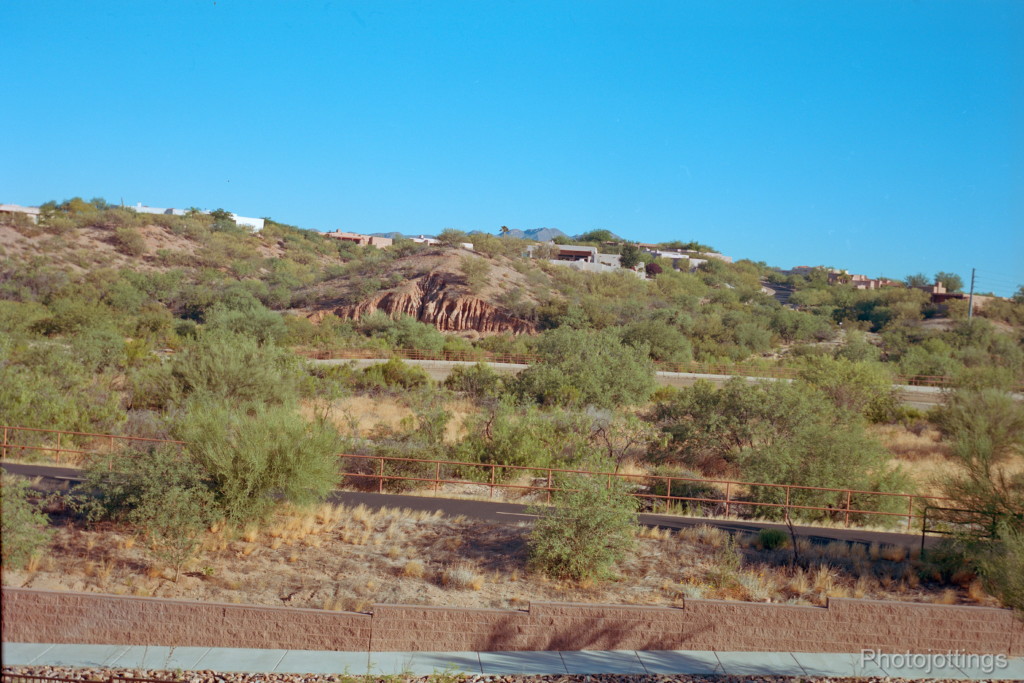 Boring test shot at F/16. The center is sharp, but the sides, (especially the right side), is soft.  Click for large version 5500 pixels wide. 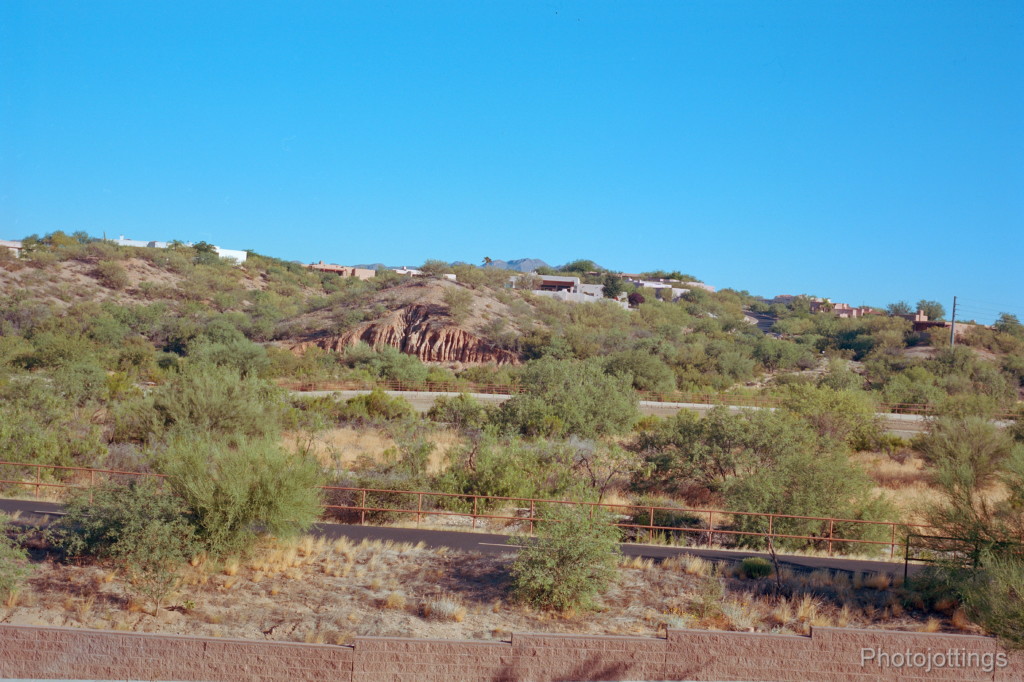 Great central sharpness at F/32 and the sides are quite sharp too. Click for large version, 5500 pixels wide.

Unfortunately, this is all I have for test pics. I did take quite a few shots, but they were not really usable, or comparable at different apertures, so I’ll try to sum up the quality as best I can.  I did test F/11, where the centers are very sharp, but the sides are soft.  Stopping down to F/16, (similar at F/22) makes the sides a little sharper, and will be good for smaller to medium sized prints.  At F/32, the whole image shows a lot of resolution, even the sides.  For very sharp sides, stop down to F/45, however, that may mean using a tripod.

I’m really surprised by the quality of the achromatic triplet type lens; it’s super sharp stopped down hard, and the contrast is pretty good, but not up to the higher quality Kodak anastigmat lenses of the day.

If you’re going to buy one of these for taking snaps, you’re best bet for good photos would be Tri-X 400,  T-max 400 for B&W, or for color try Kodak Porta 800, shoot both at 1/50 second shutter speed.  Hopefully, the shutter speed is correct, and that’s another problem with an old camera; most are not!!  Look through the viewfinder, compose, hold steady and push the shutter button ever so gently!  Oh, and don’t forget, there’s no double exposure prevention, so make sure to advance the film after each shot.  Good luck!