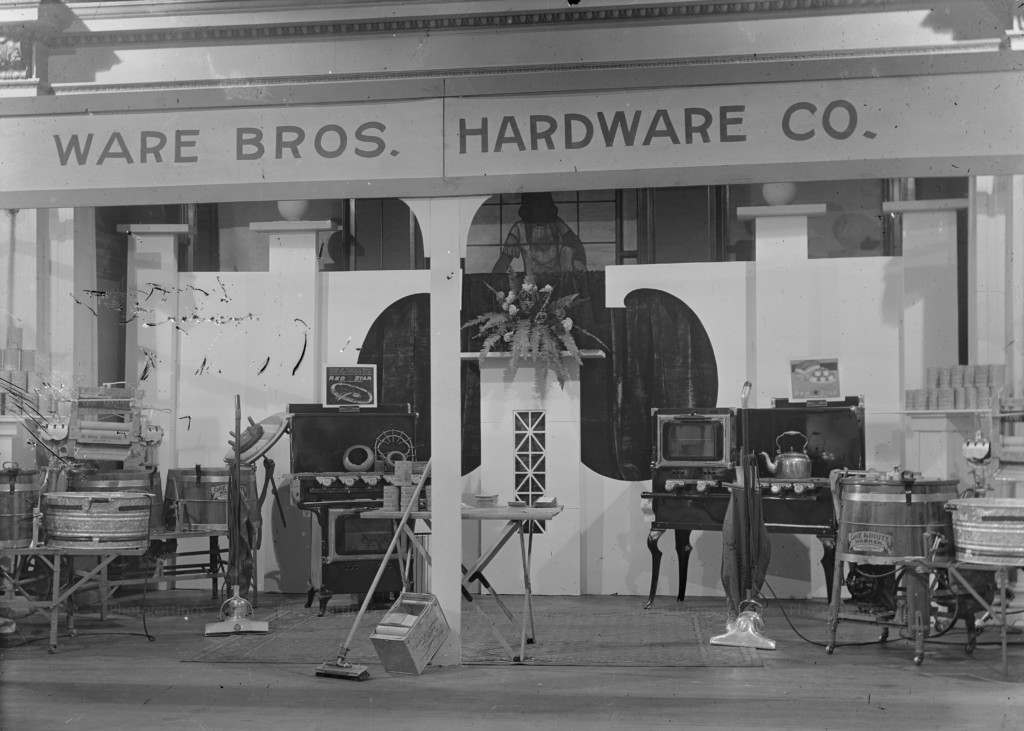 It’s April, (in 1918), and time for some spring cleaning, and maybe to replace your worn out stove with a new Detroit Red Star that can fry a thick steak in just 20 minutes!!  How about a One Minute washing maching, bench or floor model, (see it in color here), and some One Minute Cleanser?  The two electric sweepers brands look to be “America” and maybe “Hoover” although it’s hard to tell.  I see a couple of clothes wringers at the sides of the image, and a floor scrubber too.

This image comes to us as a 5×7 glass plate negative, and one of about fourteen I purchased as a set recently, all from Ware Brothers Sporting Goods and Hardware store in Spokane Washington, and 125 Howard St might be the address of our store at the time of these photographs.  We can date the image to around 1917-1919 as other pictures in this set have a 1917 wartime Marine recruiting poster, with Red Cross blood donation info, and certain items that were only made until 1919.

This picture, and the others were probably taken by an amateur, as many are crooked, along with incorrect exposures, or simply not very sharp, either from missed focus or camera jitter.  This image suffers from soft sides, probably from using an aperture that was too wide, (or from a cheap three element lens), although maybe the photographer got tired of waiting a half hour or more for each exposure; stopping down the aperture for sharper sides and you wind up with hours long exposures(!)

Who took these pictures?  Was it the store owners Son, Daughter or Wife, or friend trying their luck as a photographer?  We’ll probably never know, but that person left us with an interesting ‘window’ into the past!

Check out another image from this set with a golf theme here.