The subject for today’s large format negative post is the lovely Grace Moore.  Mary Willie Grace Moore was born in Del Rio, Tennessee, where she was nicknamed ‘The Tennessee Nightingale’ due to her wonderful operatic soprano voice.  She made her first Broadway appearance in 1920 and her operatic debut at the Metropolitan Theatre in New York City in 1928.  In the 1930s and 1940s she gave concert performances throughout the United States and Europe and was active in the USO shows during World War II.  Tragically, she died in a plane crash near the Copenhagen, Denmark airport in 1947.

This image was taken around 1935, which was the time of her academy award nomination for best actress for her performance in the 1934 smash hit ‘one night of love.’  Go to her wikipedia page if you’d like more info.

Unfortunately the beautiful Grace Moore is no longer with us; however, through the magicalness of YouTube, and mysteriousness of the internet, you can see her alive, and performing a duet with Lawrence Tibbett called ‘wanting you.’  Extra points for anyone that watches the entire clip!  Well rats; I just can’t get past the guys mustache; apparently it worked back in the day.

I purchased this 8×10″ Kodak nitrate negative via eBay.  The detail in this (almost 8000 pixels long ) image is pretty incredible for the 1930s, even though the photographer may have focused slightly behind her face by about 3-4″ or so, or maybe she swayed forwards that much.  I like the pose, soft lighting from high right, the use of the mirror, and the gladiolus plucked from the bouquet and inserted in her waist cincher.  A closer look reveals a piece of luggage on the ottoman to the right, perhaps she’s ready to leave, or maybe she just got dressed, and is ready for a performance; I’d guess the latter as she looks pretty fresh, and is sporting some serious jewelry. No doubt this was a colorful scene back then; although I still like B&W when photographing people. She would’ve been about 36 years old at the time of this photo.

Most likely the picture was taken in 1935, at the Exposition Auditorium in San Francisco CA; note the name on the mirror bottom rail. 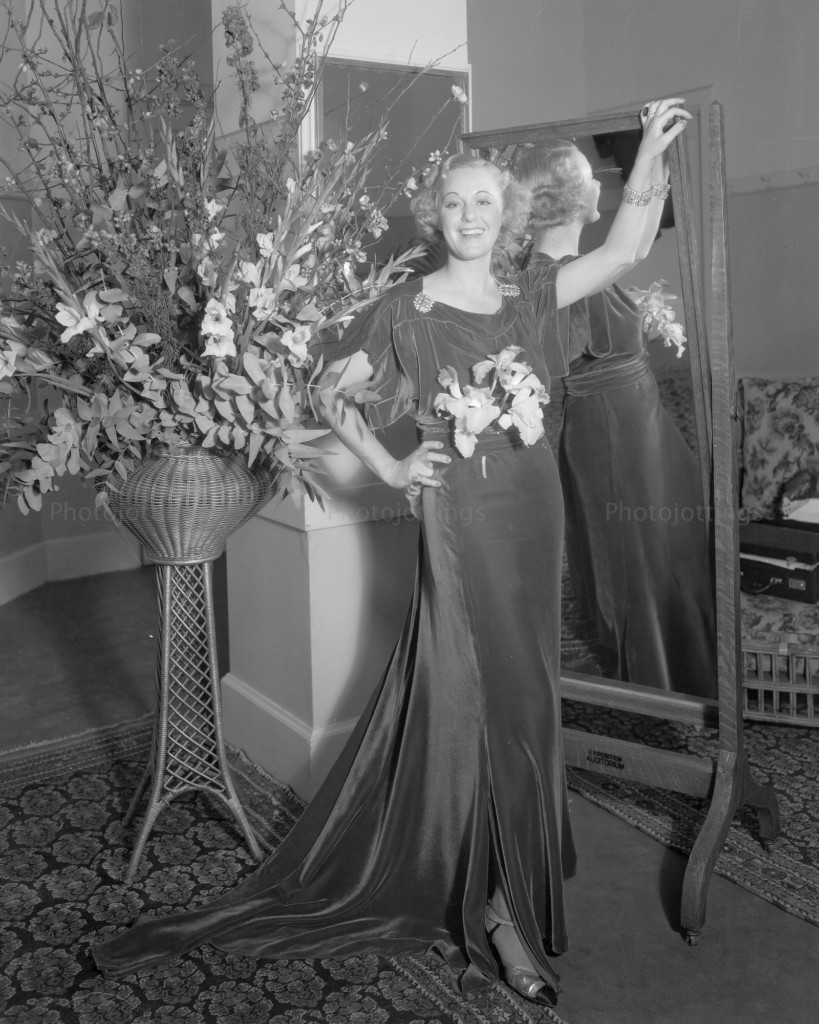 That’s it for our brief visit with Grace Moore in 1935!