I purchased this roll of CineStill 800T Xpro quite a while back, and finally found a good time to use it, which is at night with a lot of lights.  It’s tungsten balanced film, with a color of 3200k, (same as incandescent light bulbs), so if you use it in daylight without a filter, you’ll wind up with very bluish images.  It has an odd characteristic of forming red halos and tinged borders around dark to bright transitions; check out the shots below to see what I’m talking about.

CineStill 800T Xpro is actually Kodak Vision3 500T 5219 color negative film, which has a coating called ‘remjet’ for use in motion picture cameras; however, Cinestill has removed the coating so it can be developed in standard color print C-41 chemicals, see the info below from CineStill.

All images below were taken with the Olympus 35 SP, hand-held with an aperture at F/1.7, and around 1/15 second.  Scanned on a Nikon Coolscan 9000 ED.  Pictures are sized at 3000×2000, that’s large enough so you can see all the resolution from the negative.  Remember, these were taken hand-held with a wide open aperture at a slow shutter speed, so they aren’t super sharp.  If you want to use a tripod for the ultimate in night time and low light image quality, there are better films for that.

The roll I purchased late in 2017 is non-DX coded, so you have to dial in your own ISO rating, but I didn’t do that for this roll, I just shot at the maximum aperture and at the slowest shutter speed I though I could hold steady with any degree of reliability.  The information from CineStill is that 135 cassettes are now DX coded, so I’m guessing all new 135 rolls have this.

The film you get has ‘Eastman 5219’ written on the negative edges along with a bunch of other codes.  The film is very flat, and scans well.  CineStill 800T is pricey at close to $11 per 135 roll.

This post is not a review; I’ve only shot one roll of 135, I just thought I’d show how the roll turned out.  I have a 120 roll in the fridge, and will use it when the opportunity comes up.

With all the incidentals out of the way, let’s move on to some samples.  I like the film; it has a fine grain and is quite sharp, even more so than this film, and one of the few tungsten balanced films that you can buy fresh.  With that said, you can use any daylight balanced film with an 80A filter and get the same color balance, but with a two stop light loss.

“Brighton” up your day, or night!  This brightly lit scene, with no direct harsh bulbs, shows very little in the way of the red color halos and transitions.

See if you can knock your buddy out cold in this neat bar; using boxing gloves of course.  Plenty of locker room talk and horrific fighting.  Here we start to see the red tinging of bright bulbs and transitions areas from bright to dark.  It’s not quite dark out, but the overall color actually looks natural from my memory, except for the red. 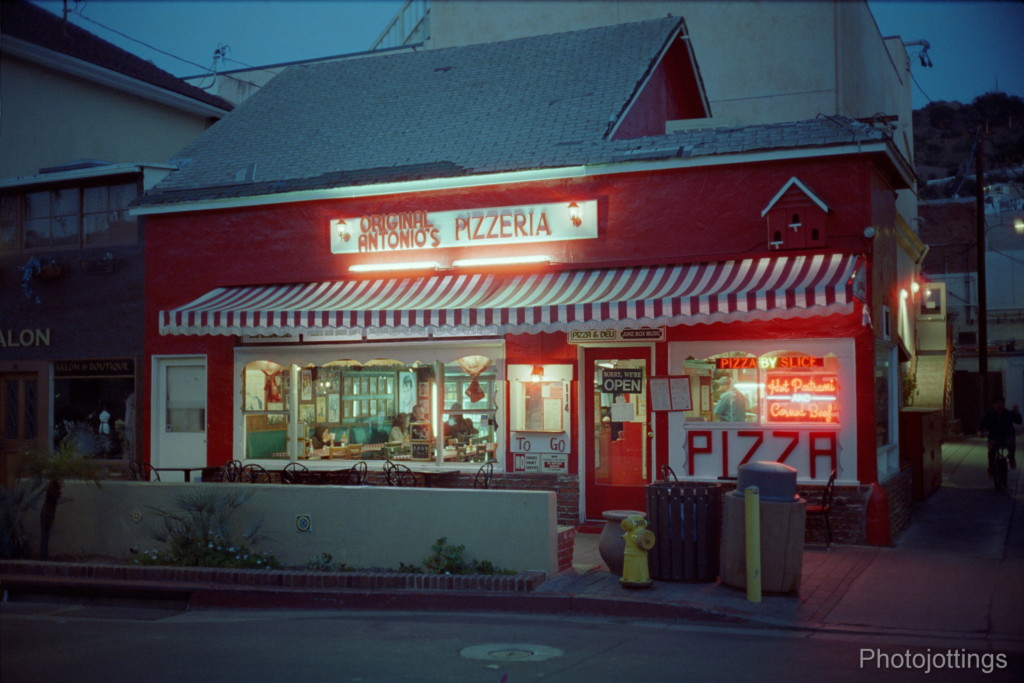 Sorry, we’re open.  You’ll be sorry if you eat inside this dirty restaurant, but the Pizza was great at a good price, use the “to go” window to the right to save your clothes from dirt and cigarette smoke.  Notice the purple martin house above the awning.  You don’t notice the red halos because the building is red. 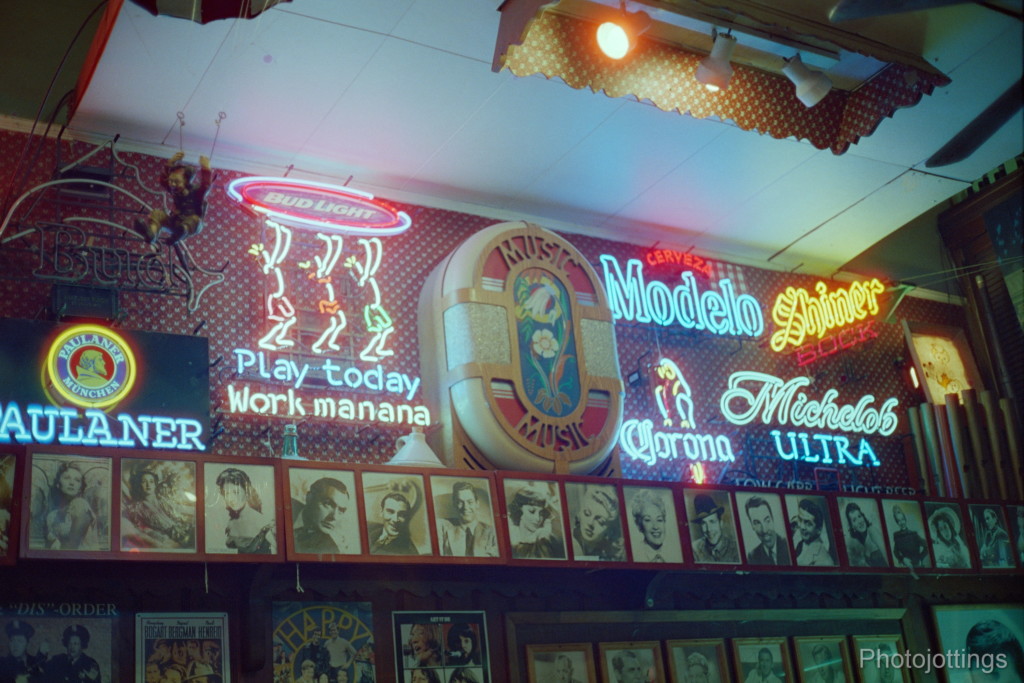 Inside the dumpy Pizza joint.  It looks like Raggedy Ann and Andy are up to no good, check out the lighted picture on the extreme right side.

And we’ll leave the light on for ya.  Here’s a good example of the red tinging along bright to dark transitions, look at the mountain ridge line and palm trunks.

On the waterfront, this picture really defines the look for this film. 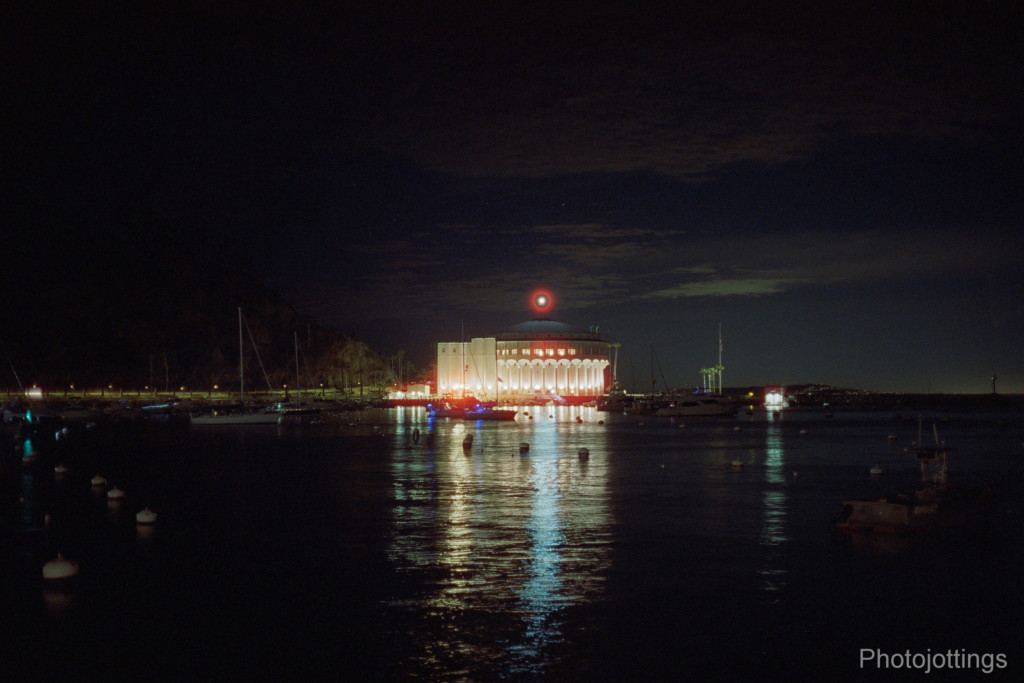 Beacon of hope; closed for the season.  The red halo on top is very noticeable, you’ll either like it, or you won’t.  A B&W conversion might look better.  Here I rested the camera on a hand rail for about 5 seconds at F/1.7.  Enlarge and check out the city lights (right side) from Los Angeles/Long Beach over 22 miles away. 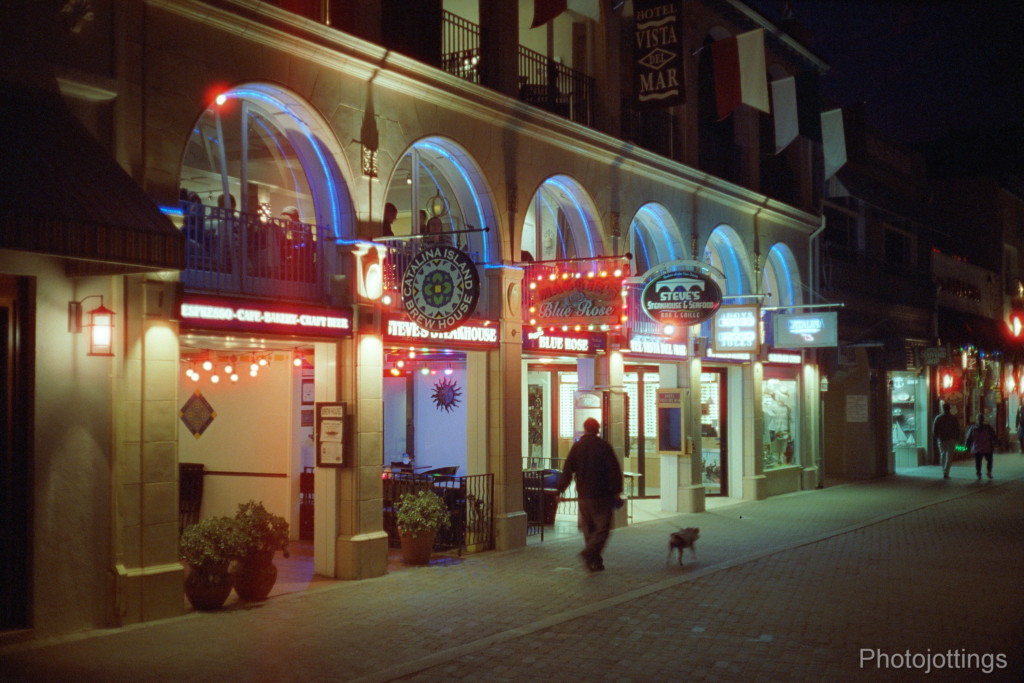 View of the Sea, with a view of the Sea.  A lot of mixed lighting here, with a predominately red bias.  The green colors towards the right are from fluorescent lighting.

So in the end, I do like the potential of this film; it’s very smooth and sharp for 800 speed, but the red halos are just a bit much sometimes, so I’m not sure I’ll use it on a regular basis.  Or, I’ll get the original Kodak Vision3 500T film with the remjet coating intact, and develop it myself using ECN-2 chemistry, and avoid the red issues.

I think for low light shooting, I prefer a more traditional look to my pictures using Fuji Superia 1600.

That’s it for a quick look at CineStill 800 T film.  Help support the site by getting your goodies, and this film here.  B&H, Amazon, ebay.  Note; current Amazon and ebay prices for this film are way too high, get it at B&H photo.