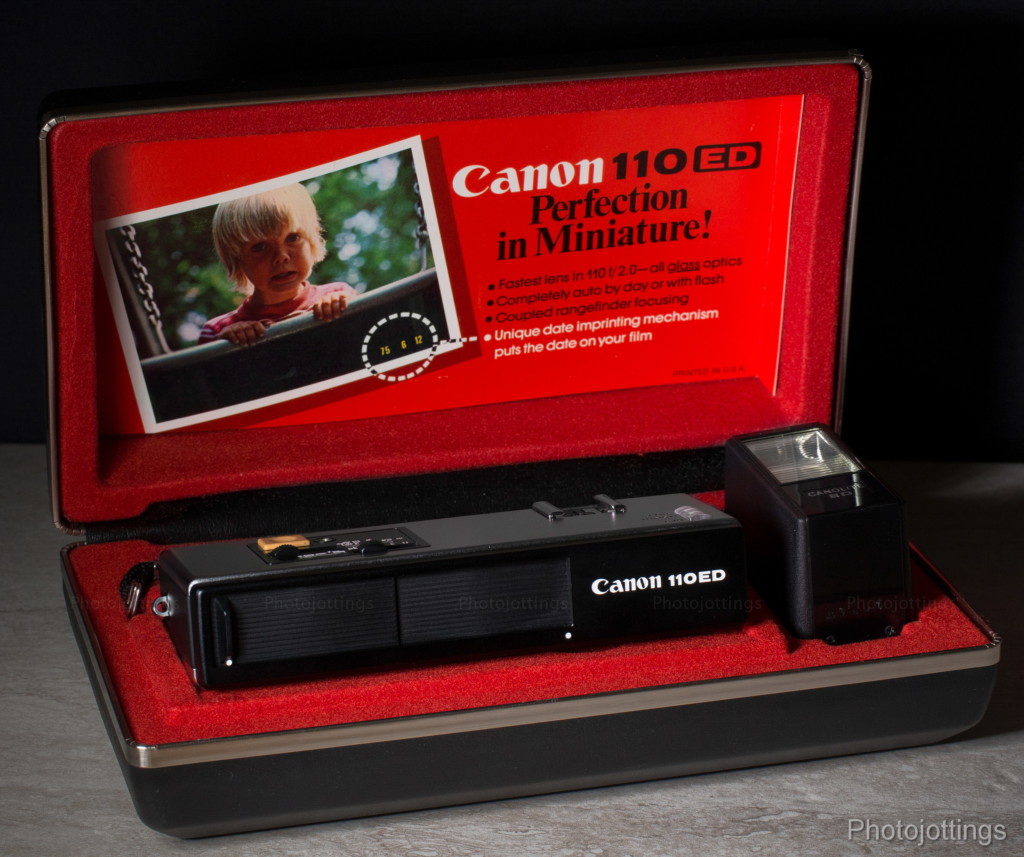 The Canon 110 ED was one of the very best 110 cameras of the day.  It had the fastest lens for a while (F/2), until Michael Landon of little house on the prairie started hawking the Kodak Ektramax a couple of years later with a F/1.9 design.  The camera outfit you see above was expensive, and cost about as much as a good 35mm camera, but it did have some advanced features that were missing on most of the 110’s, like a tripod socket, a shutter cable release, flash hotshoe, rangefinder focusing, manual aperture adjustments, and an excellent five element lens!

We’re going to take a mid 1970s trip down memory lane for this review, so head to the closet or basement and dust off your old 110; it’s probably under your bell bottoms and peace sign jewelry.  But before your sentimental photo outing, make sure you grab yourself a few ‘cartridges’ of 110 film, they’re still available fresh from B&H, Amazon, eBay.  You can get B&W, reversed rolled ‘red scale,’ regular color print, and even E-6 slide film!

With the introduction out of the way, let’s check out the Canon 110 ED specs.

Price; prices from period magazine ads in 1976; $125 at discount mail order stores, so probably a bit more at  your local camera shop.  Adjusted for inflation, today’s price would be around $538.  Current eBay prices range anywhere from $25 to $60 depending on condition and if it comes with the original box etc.  I paid about $45 total for the pristine outfit above.

Build material; the body appears to be mostly metal, and black parts are plastic, but it has an overall quality fit and finish.

Shutter and speed; between the lens 2 bladed, diamond shaped aperture.  Manual states up to (or longer than) 8 seconds at F/2, with a maximum of 1/500 at F/16.  Camera reverts to 1/30s if anything is inserted into the hotshoe.

Apertures; set by the blue colored slider. The ‘window’ and flash symbol on the very left side of the window is F/2, the odd shaped ‘cloud’ setting is F/4, , the ‘sun’ symbol is F/8, and the dot on the extreme right is F/16.

Flash; External Canolite ED flash recharges in about 5 seconds, guide number of 14m at ASO 100.  About 180 flashes per battery.  Orange light on back of flash means the flash is ready.  This outfit comes with a flash and extender to raise the flash above the camera.

Accessories for this model; a soft case, ‘deluxe’ soft case, shutter cable release, ’30’ and ’50,’ a self timer and a close-up lens.

Crippling features and omissions; no battery, no working camera.  Later, the updated Canon 110 ED 20 had a mechanical shutter speed of 1/125 if the battery was not inserted.

Good features; real rangefinder focusing and four aperture settings to choose from; small, will fit in a shirt pocket.

Other models; the newer Canon 110 ED 20 had several different features, such as a fixed mechanical shutter speed with no battery, a higher shutter speed of 1/1000, and will accomodate ASA 400 film. 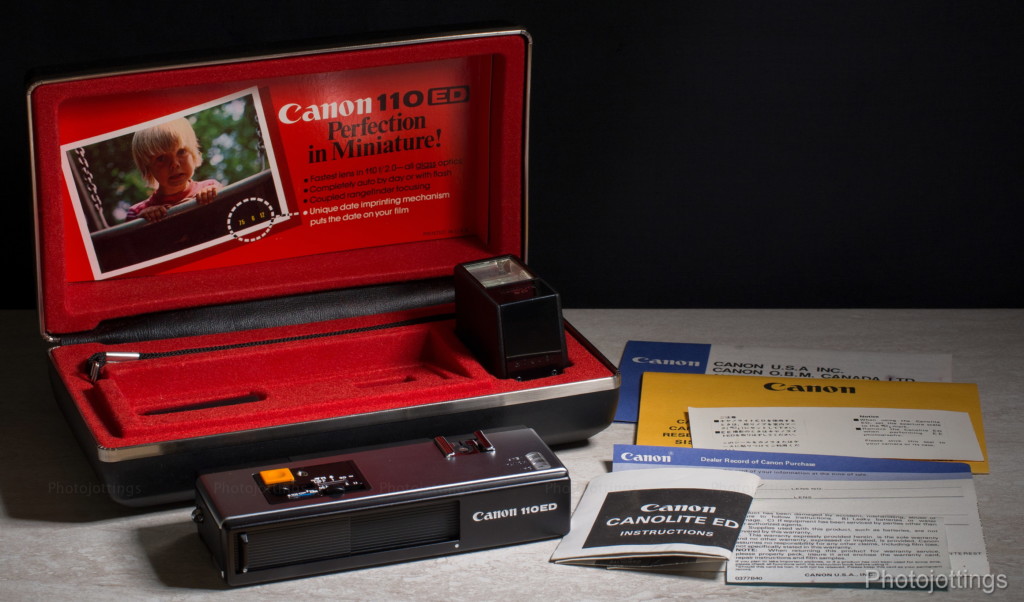 A nice sample with all the paperwork in place.  Under the camera are spaces for a battery, and flash extender.  Behind the camera resting spot is a slot for the wrist strap, and the main flash unit is on the right side.  Instructions include owners manual, Canolite ED flash manual, warranty and service cards etc. 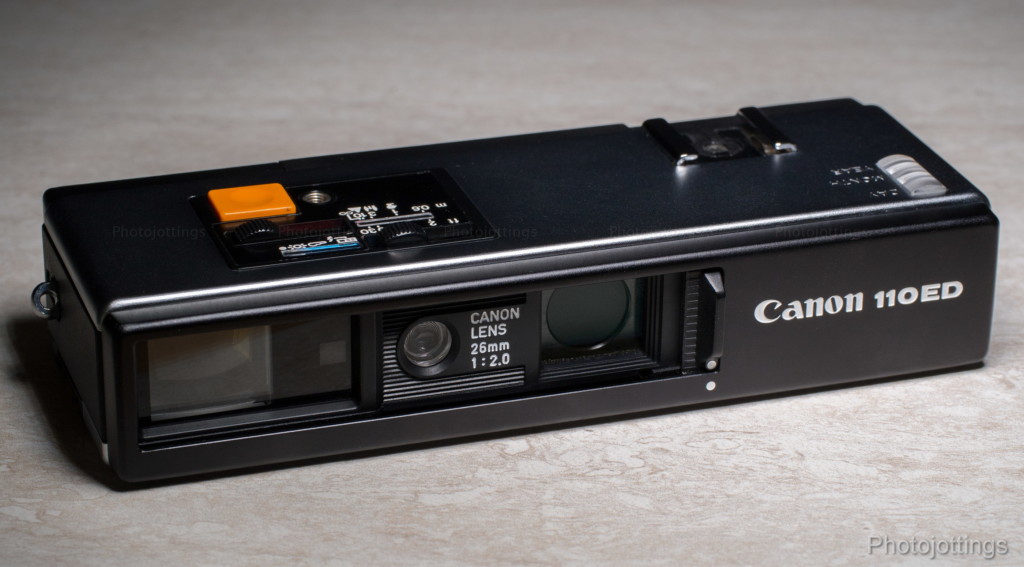 A view of the front with the lens cover open.  The viewfinder is on the left, and right next to it is the rangefinder window.  Moving mid-camera, the small circular lens is actually the light measuring cell, and the camera lens is the large circular opening next to it.  Make sure the lens cover is all the way open and the white dots are aligned, otherwise the camera won’t work. 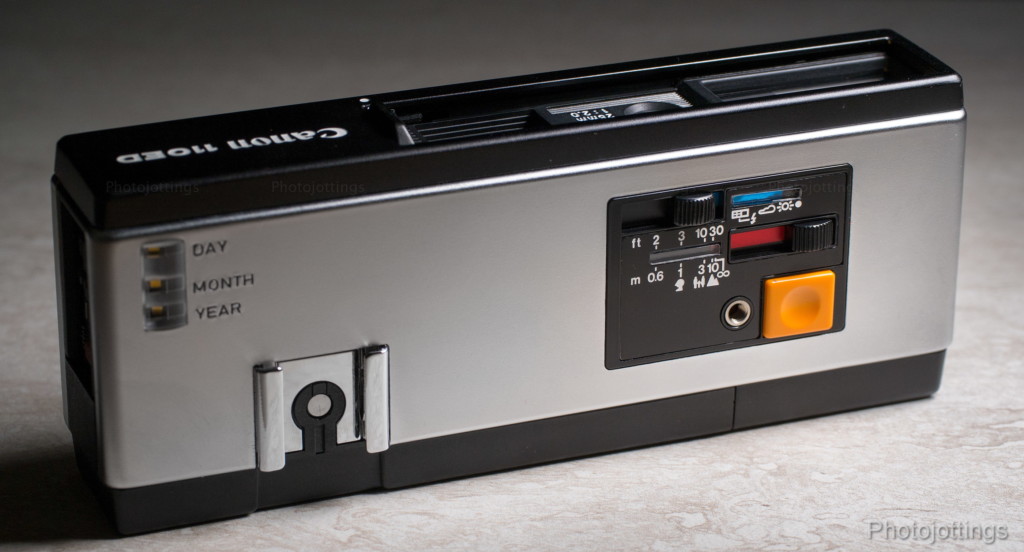 On the top is the date set window; I don’t want that crap ruining my pictures, so all are set to blank.  Hotshoe use sets the shutter speed to 1/30 second, but you don’t need a flash unit mounted to get that shutter speed, anything pushed in the mount will set that speed, like a little plastic flash mount adapter.  This feature is handy if you’re shooting in low light, and don’t want shutter speeds that are lower, or higher than 1/30s.

On the rightside is the aperture and rangefinder sliders, we’ll get to that in a moment.

The back is simply for loading film, and looking through the viewfinder.

With the film loading door open, you can see the battery compartment on the left side, it’s the square with a circle in the middle.  The lens light chamber is felt lined.  The finder with parallax lines can be seen in this view. 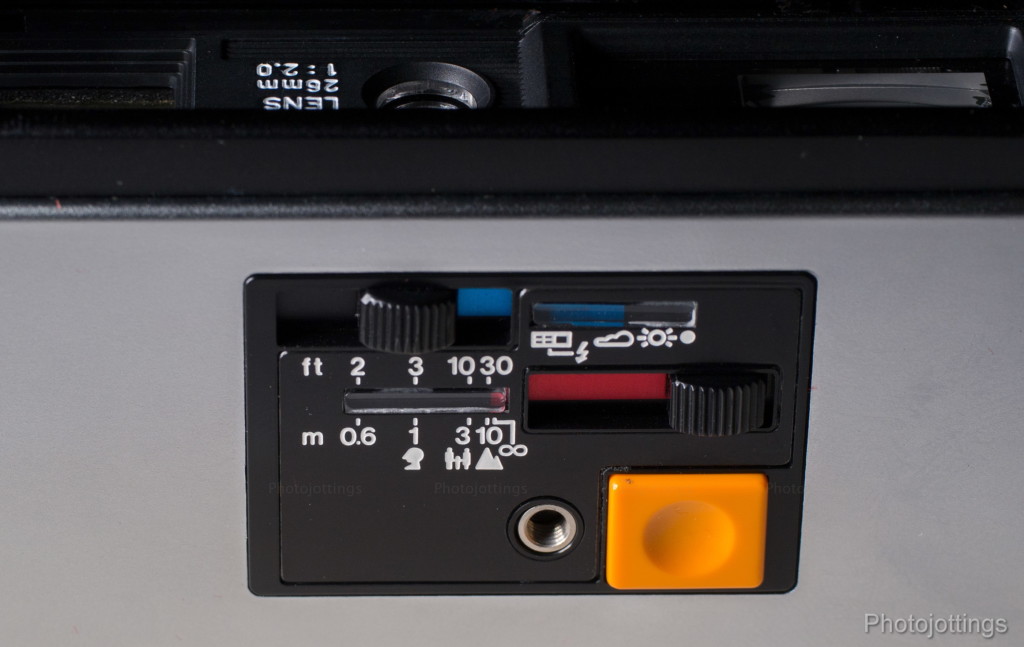 Here is the main control panel for the camera.  The red slider is for focusing; you move the slider until the rangefinder patch subject coincides; you don’t really need to use the scale. The top blue colored slider is for setting the aperture, and are as follows: the white outlined ‘window’ and ‘flash’ symbol on the very left side is F/2, the odd shaped ‘cloud’ setting is F/4, , the ‘sun’ symbol is F/8, and the dot on the extreme right is F/16.

At the bottom right are the shutter button, and the cable release socket; no, that’s not a tripod mount! 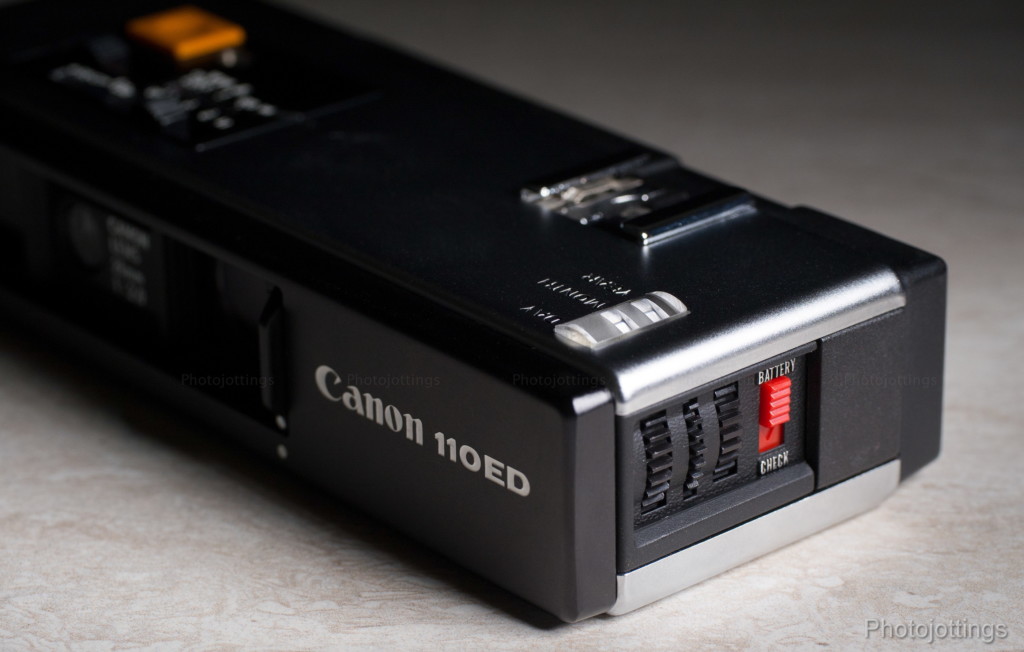 The geared wheels are where you set the date for imprinting on your pictures; it ends at 12-31-’86 so Canon figured the camera would last about 10 years.  The red switch is for checking the battery; when pressed, it triggers a orange light in the viewfinder if the battery has a sufficient charge.

Underneath we have the film advance on the left, and a 1/4-20 tripod socket on the right. 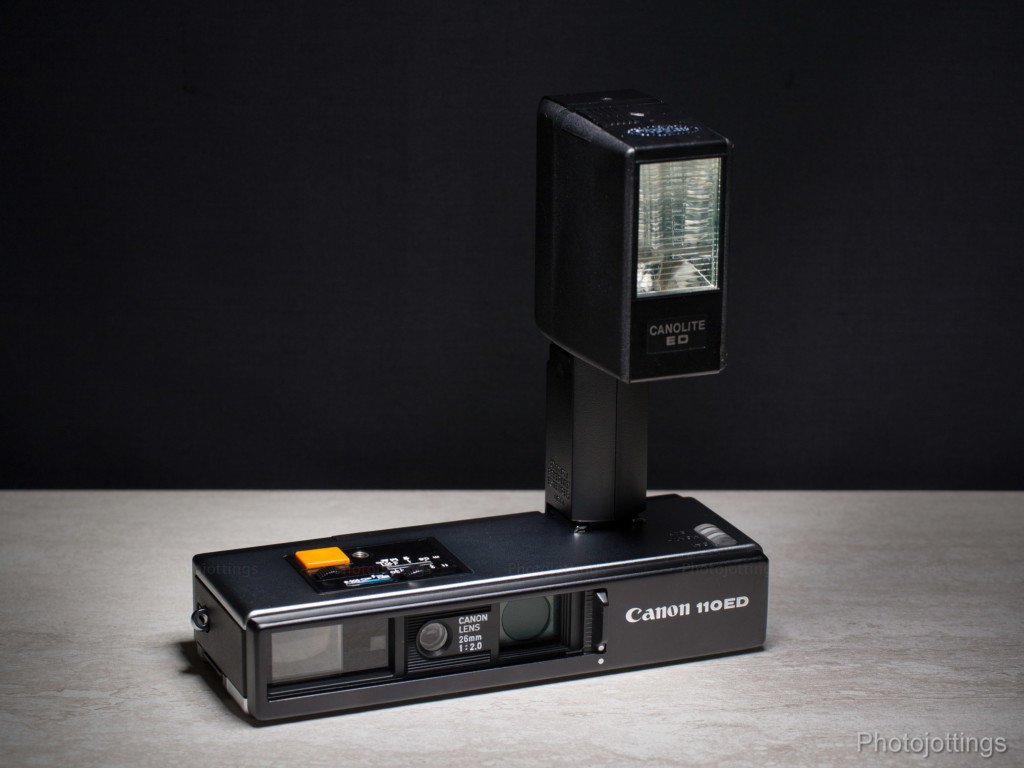 Canon 110 ED with Canolite ED flash and extender attached.  The flash is quite powerful, but not very useful or handy for what’s supposed to be a pocket camera.  The flash takes two ‘AA’ batteries. 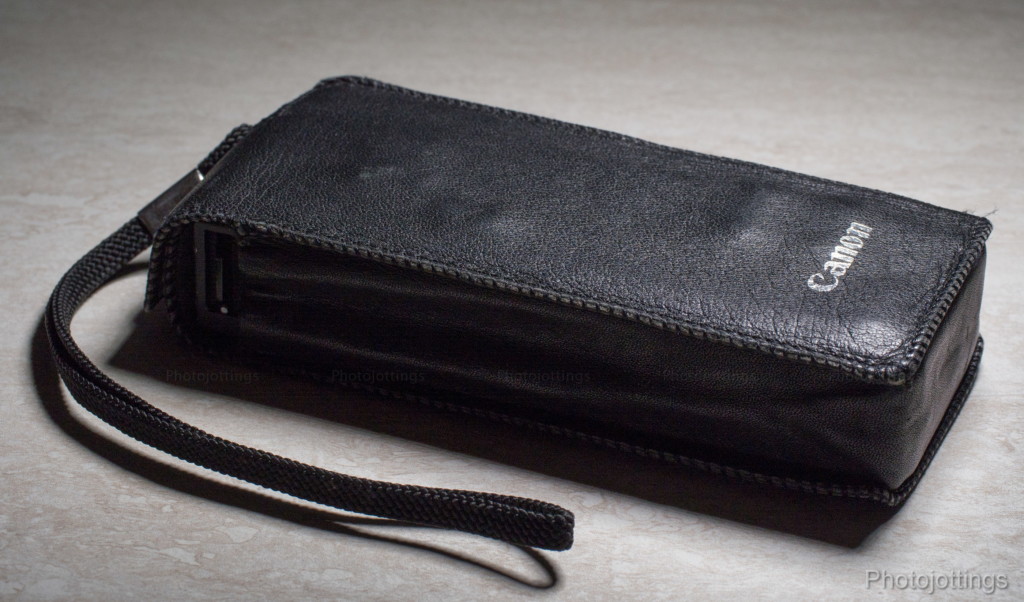 This is the ‘Soft Case’ and wrist strap that was probably included when purchasing the camera only. 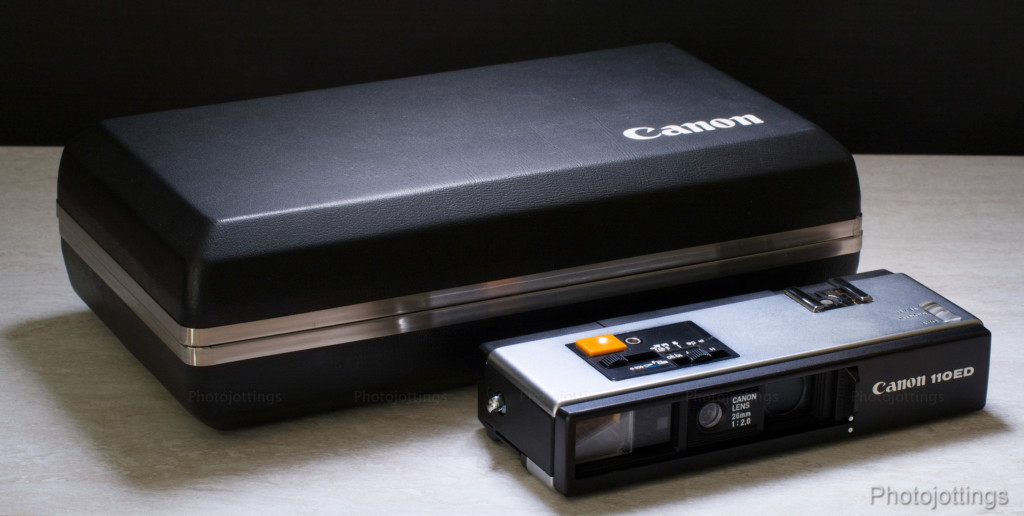 This is the presentation case that included the flash; I don’t think you could purchase it separately. 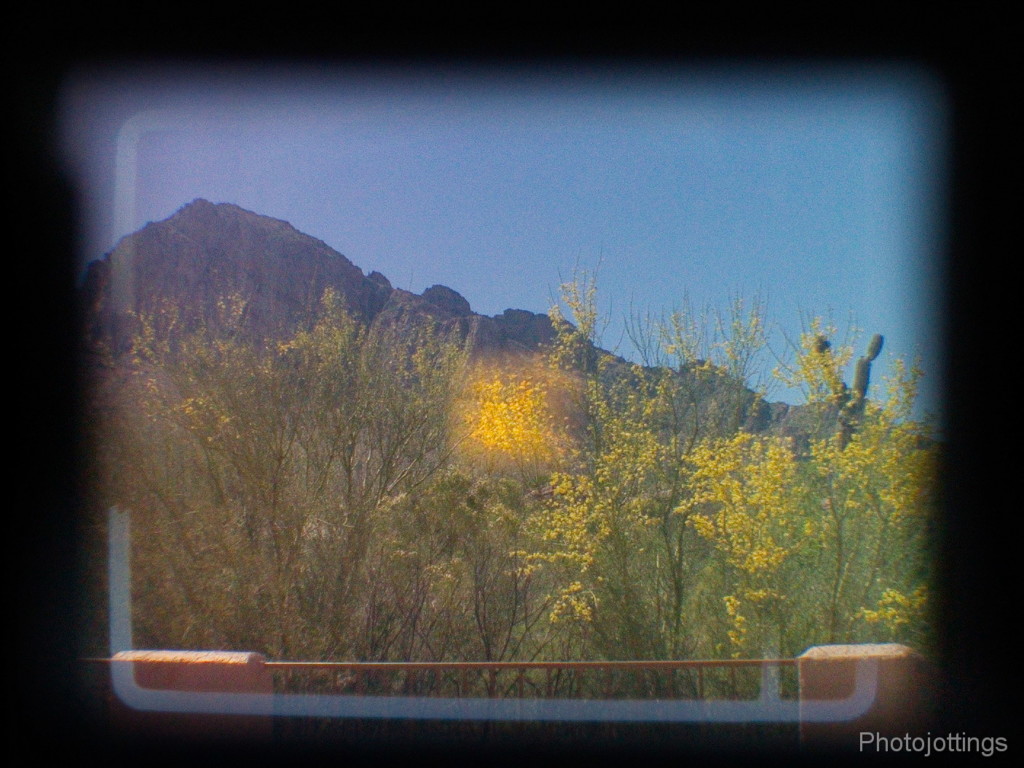 A view through the finder.  The yellowish rangefinder patch is visible in the center; it’s not focused properly here.

The 110 cartridge is actually larger than a roll of 35mm film.  With 35mm film, you had to thread the film leader on to a  take up spool, not so with 110 film, you just plopped it in and closed the door.

Sample images below.  All were scanned on a Nikon 9000 ED, and sized to just south of 2000 pixels on the long end.  There is no more resolution than what you see here.

A note on the samples: the images below show a very soft left side, especially at F/2-4.  I initially thought the lens was somehow messed up on my camera, so I bought another one hoping it would be better.  Unfortunately, both show the same problem.  I’m guessing it’s the way the film cartridge sites inside the chamber.  Lomography is apparently manufacturing their own 110 cassettes, and they must not be exactly the same as the original ones.  However, this problem did not show up in the Minolta Autopak 460 Tx review.  I did run 2 rolls through each camera from different film batches, so I don’t think I received some bad, or defective cassettes.  When I get a spare moment, I may try an original Kodak 110 cassette and see how that works. 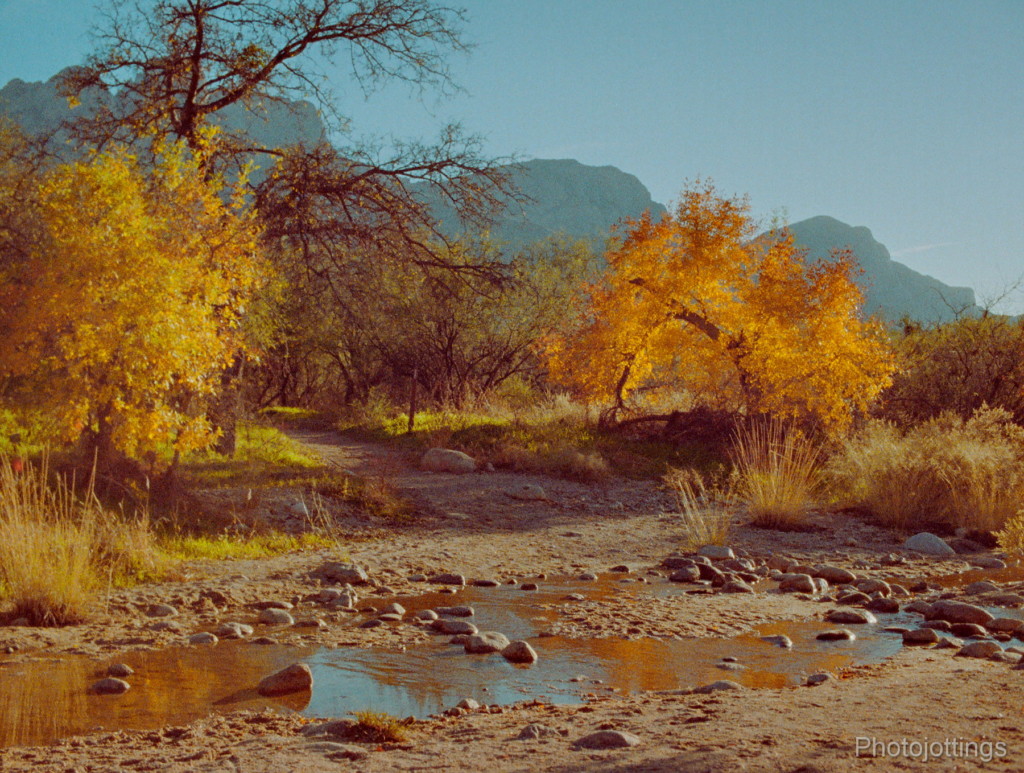 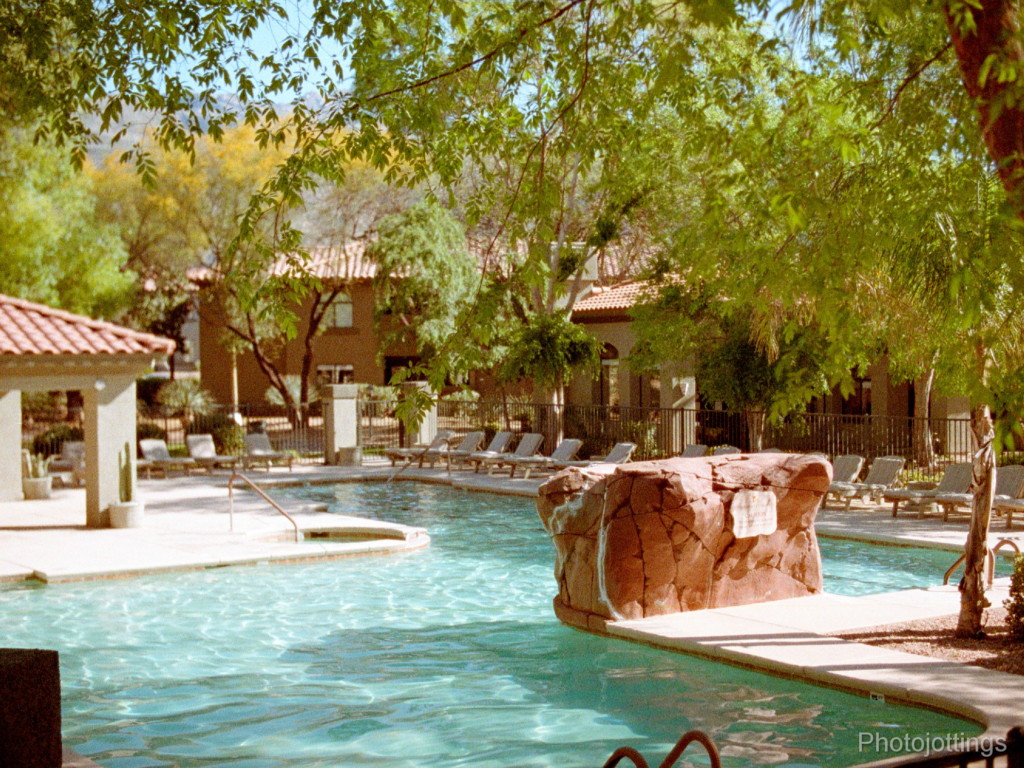 Resort life.  Notice the blurry background on the left side, this must’ve been taken at F/2-4.  Focusing was correct for this shot. 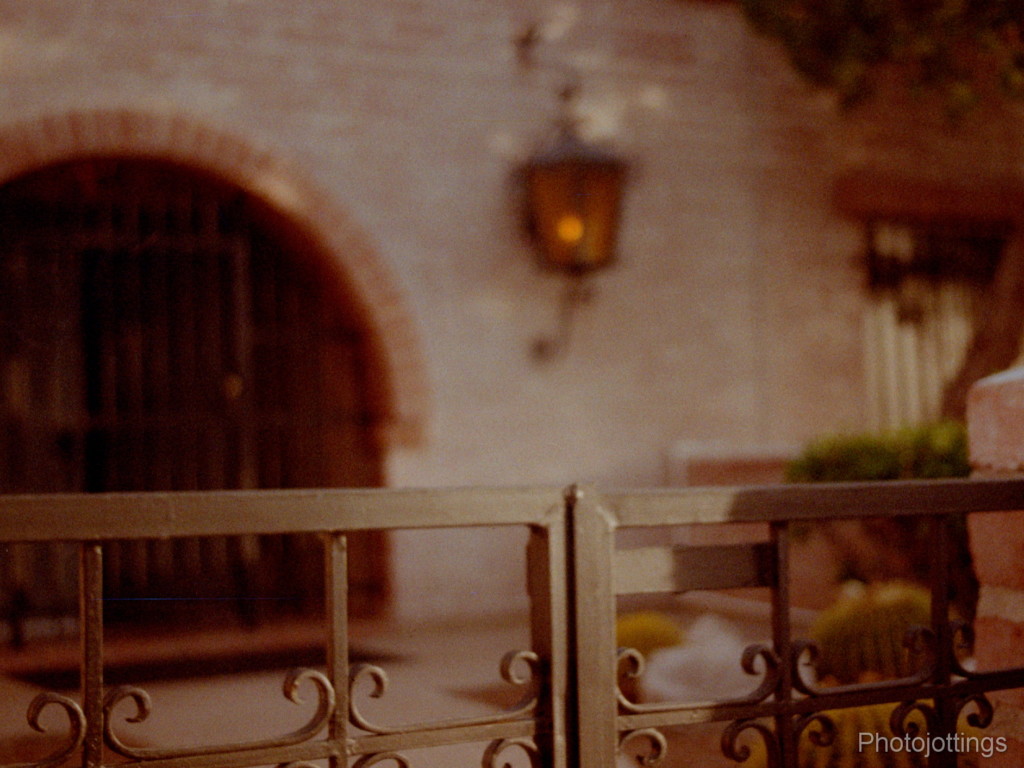 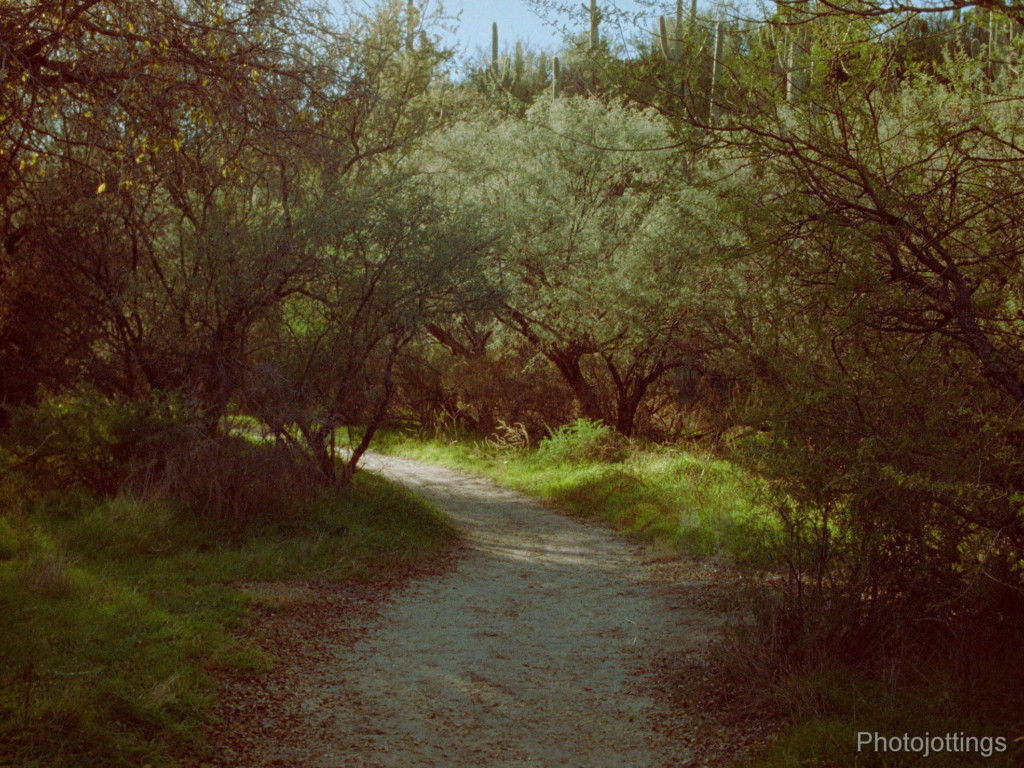 The Sonoran Forest in Spring; I think at F/8. 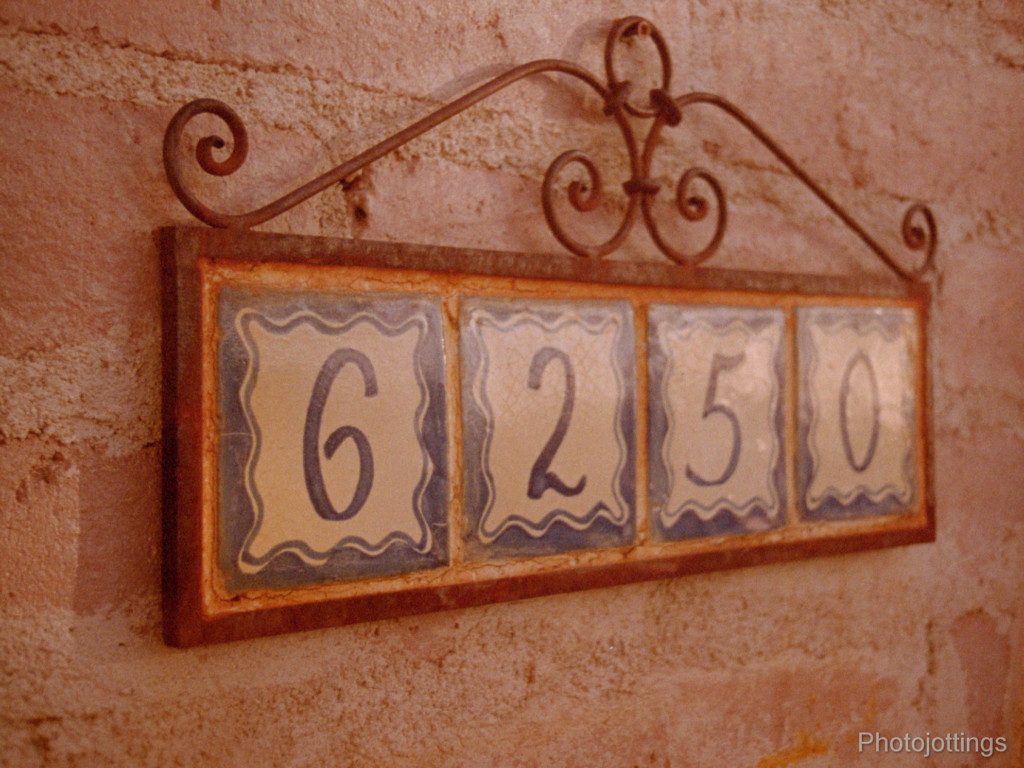 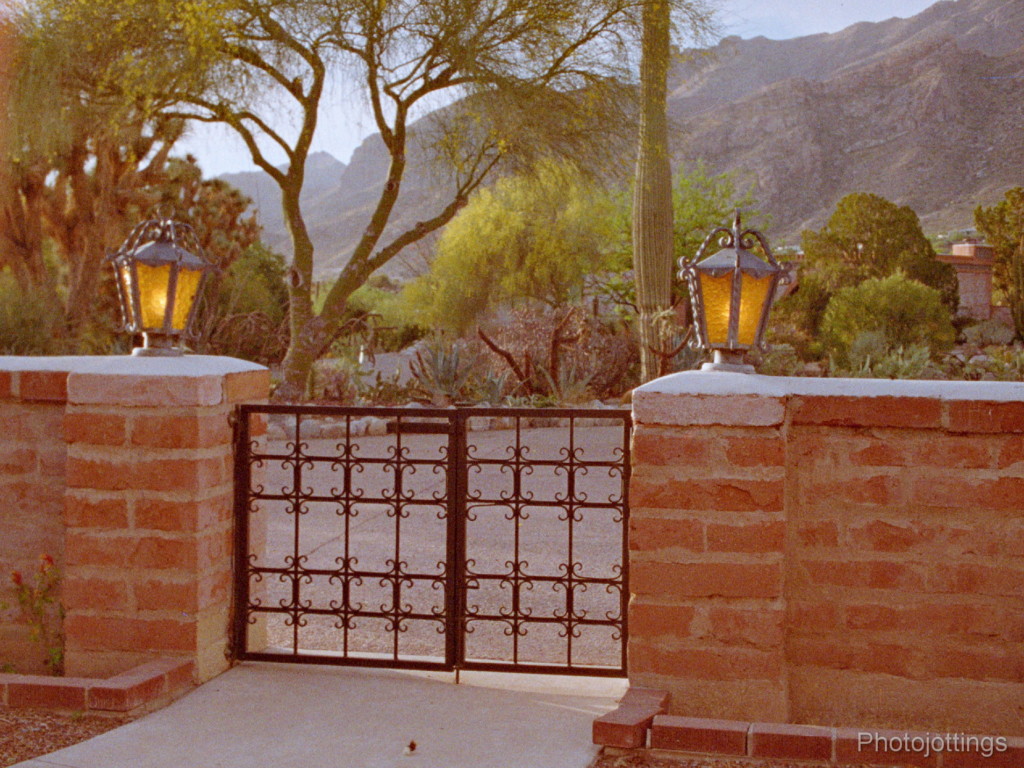 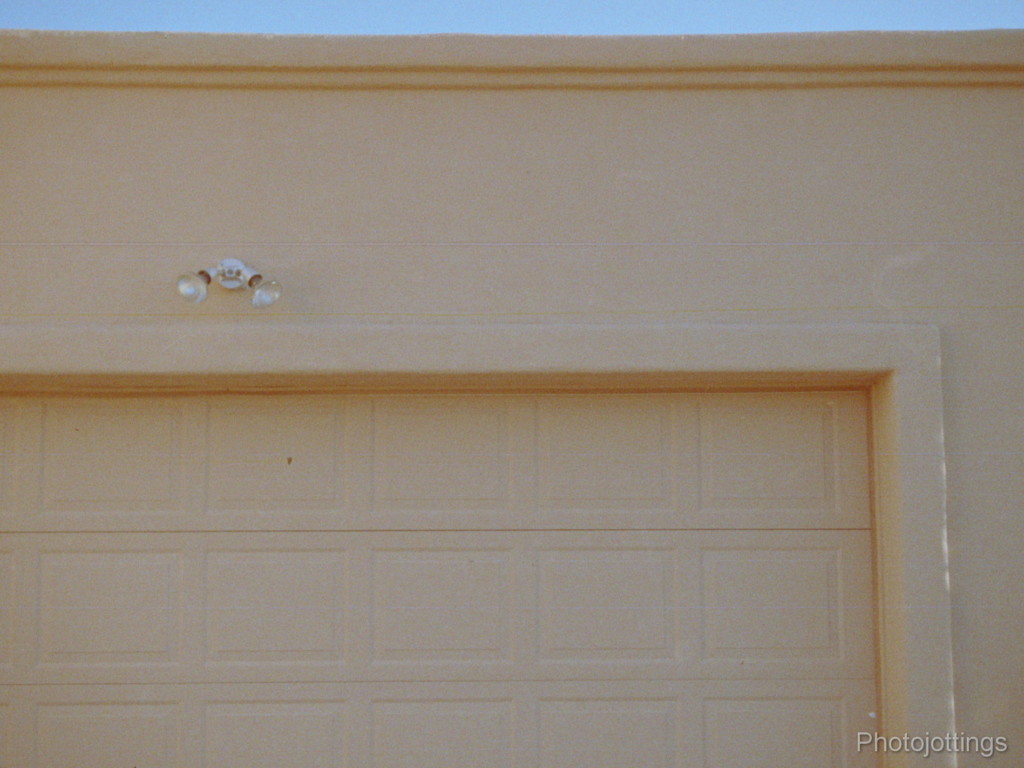 I see a small amount of pincushion distortion alone the garage roof line. 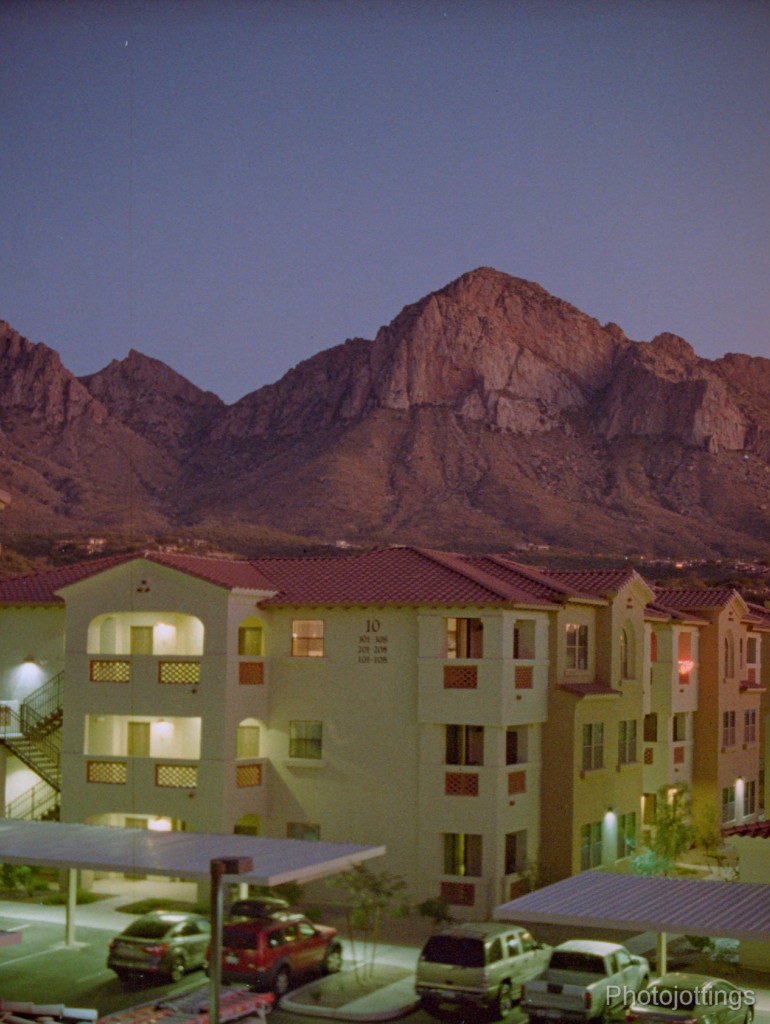 Long exposure at F/2; I think this ended up being about 20+ seconds long; much more than the rated 8 seconds in the owner’s manual.

Test shots from four different apertures.  All are 1984 pixels wide on the long end. 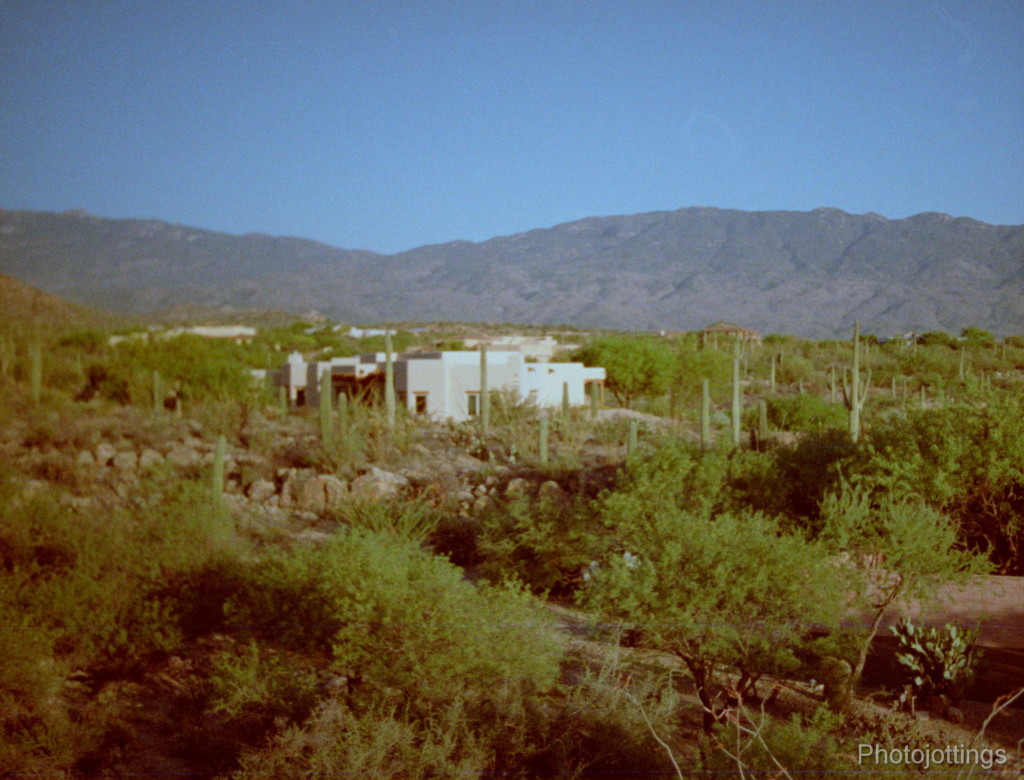 This shot is at F/2, and we can clearly see the soft left side. 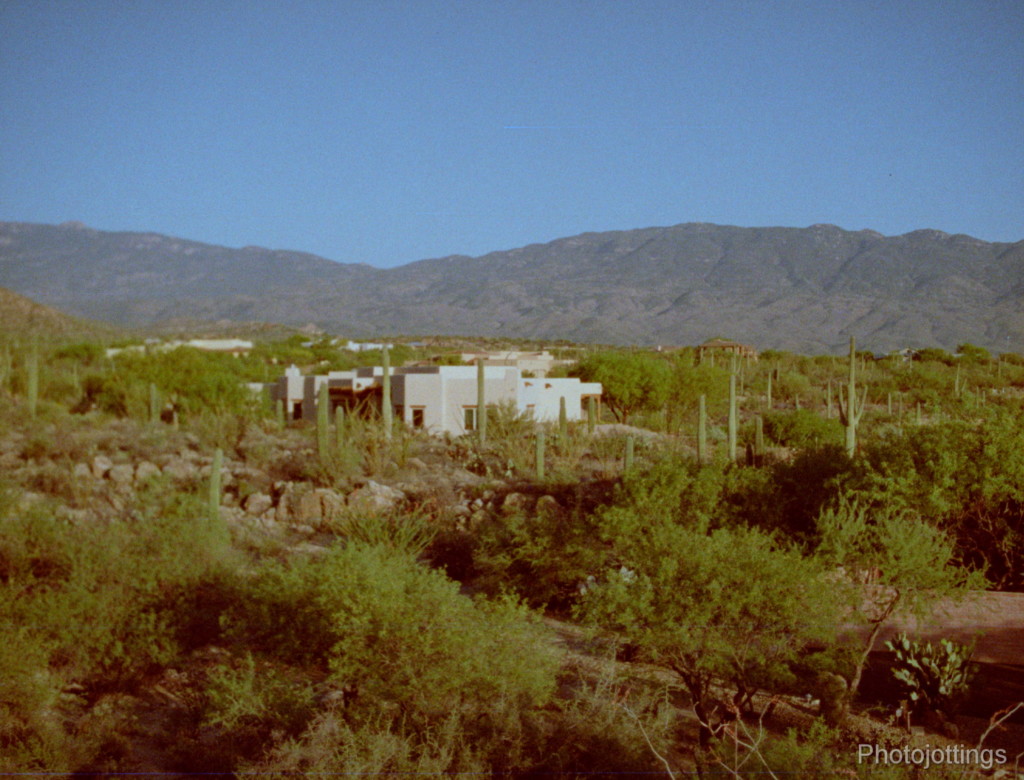 Moving to F/4 provides a little more sharpness along the whole image, especially the left side. 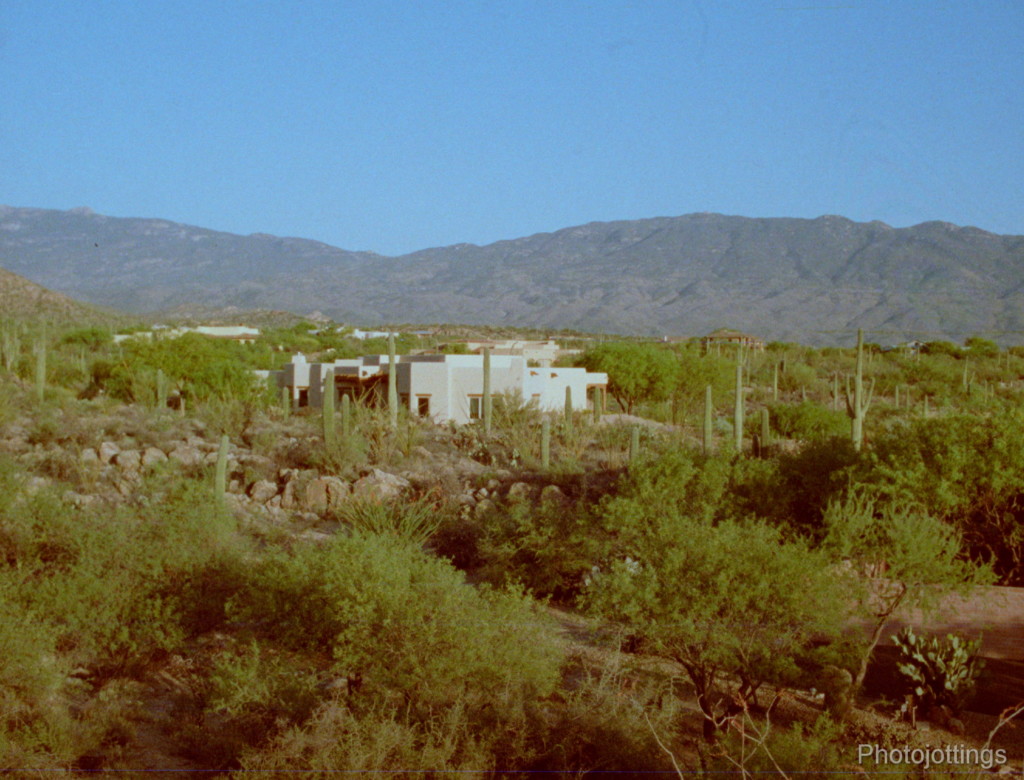 Stopped down to F/8 the image looks pretty good, but the softness on the left continues. 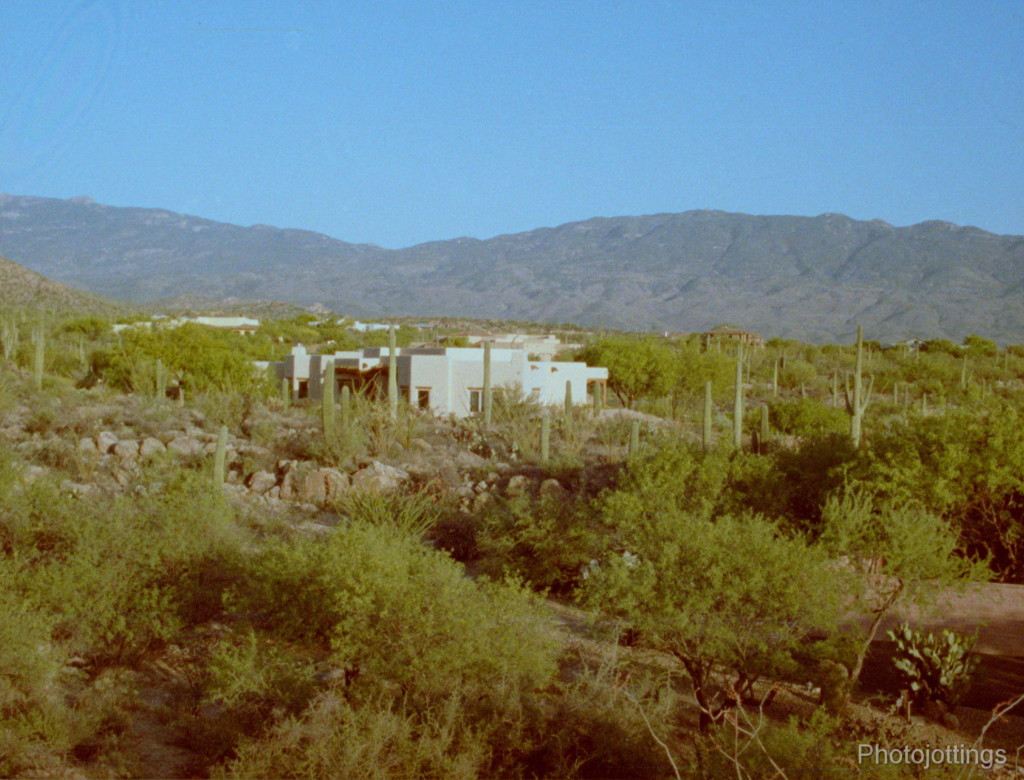 Finally at F/16 the whole image is sharp.  Lomography Tiger 200.

The Canon 110 ED turned in a good review, even with the soft side issue, as I think it’s not with the camera, but the newly manufactured cartridges from Lomography.  Those new cartridges don’t have exactly the same protrusion dimensions as the original Kodak cartridges, and the tiny differences are enough to keep the cartridge from correctly positioning itself inside the chamber.  Both types of cartridges seem to fit in the chamber properly, but the Kodak is easy to insert and remove.  Maybe if I have some time in the future, I’ll test out an old cartridge of Kodak 110 film and see what happens.

With the problems aside, I think the Canon 110 ED was (and is), a very good camera, and using an original film cartridge from Kodak the lens is probably quite sharp even at F/2, just look at the right side of the F/2 shots above and you can see it’s sharp.  The rangefinder focusing works well and seems very accurate on my copy.  I also like the tripod socket and cable release for night shots.  One thing that I wish this model had is a built-in flash; the included add-on just isn’t very handy, and when the flash is on the camera, it’s no longer small and pocketable, and that’s the whole point of this camera system isn’t it?

For right now, I’m recommending the Minolta Autopak 460Tx over the Canon 110 ED.  The pictures look better at larger apertures, you get a flash and telephoto lens too, plus the Minolta works without batteries.

Even though 110 film doesn’t have as much resolution as a mediocre cell phone, remember: film is fun, especially when you take a few weeks to shoot a roll, or wait a few months to turn it in for developing, and when you get them back, you’re pleasantly surprised by all the pictures you forgot you took!  Number two; with film, you have an original of your work, and you can hand the negatives down to your children, or sell them decades later on eBay for a few bucks per picture, like so many people do here.  Well, that’s probably not a big positive, but what the hell, it’s still fun to go out and shoot like it’s 1975!

As I’ve stated earlier, there are some choices for film.  I like Lomography Tiger 200, it’s actually quite sharp, and about the same as Kodak film back in the day, I know this as I have a bunch of negatives that I’ve scanned from the 1980s, and those photos are no sharper than today’s film.  Lomography Orca 100 B&W film is ok, but it’s very grainy, and appears to be an ortho type film (not sensitive to red) because the skies are always white with almost no cloud definition.  Lomography Peacock is ‘slide’ or E-6 film, and looks just awful all the way around, avoid this as E-6 is more expensive to develop, and the colors make me want to puke.  I guess it’s made to cross process in standard C-41 chemistry for that cool ‘film gone bad’ look so many people like now days.  Lomography Lobster Redscale is a color print film that has been reversed spooled, so you’re shooting the image opposite of the emulsion side; pardon me, but I’think I’m ready to puke again.