This image is one of several that I took featuring the design details and decorating of an expensive custom home to be used for a promotional website.  I took nine shots in about three hours, and that wasn’t enough time, I felt rushed.  The weather didn’t cooperate as you can see through the doors, but it really doesn’t take anything away from the house.   For this shot I used a very simple lighting set-up.  A flash with umbrella is just to my right (placed so the reflection wouldn’t show in the doors), and was used for general fill, especially up high.  A second flash to the left was used with a tight grid to highlight the green plant in the corner.  One more flash was placed to the left and pointed at the table to show off the details.  The shadows point to the location of the lights.

The iron door inserts wanted to blow out too easily, even with a relatively fast shutter speed.  I  wanted to over-expose the outside because there’s an empty dirt lot across the street (which doesn’t make the image stronger), but I really wasn’t able to without losing the door details.
Specs for the shot. Since the images are for a website, resolution is irrelevant, so I used the Sony A580, and Sigma 10-20mm lens at 20mm (30mm equiv), ISO 200, F/8, 1/50sec.  I rotated and slightly cropped the image, that’s about it.
I’ll post more shots of this beautiful home in the near future. 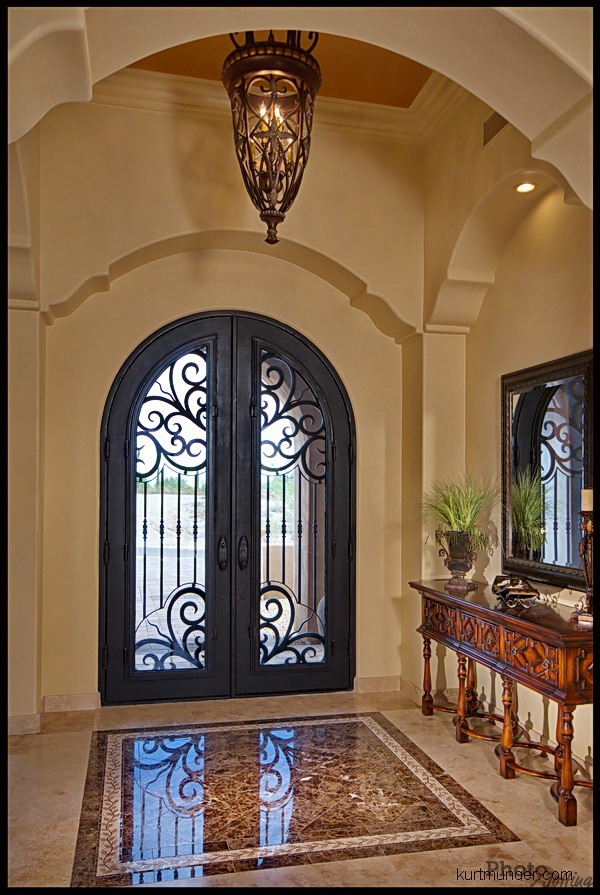