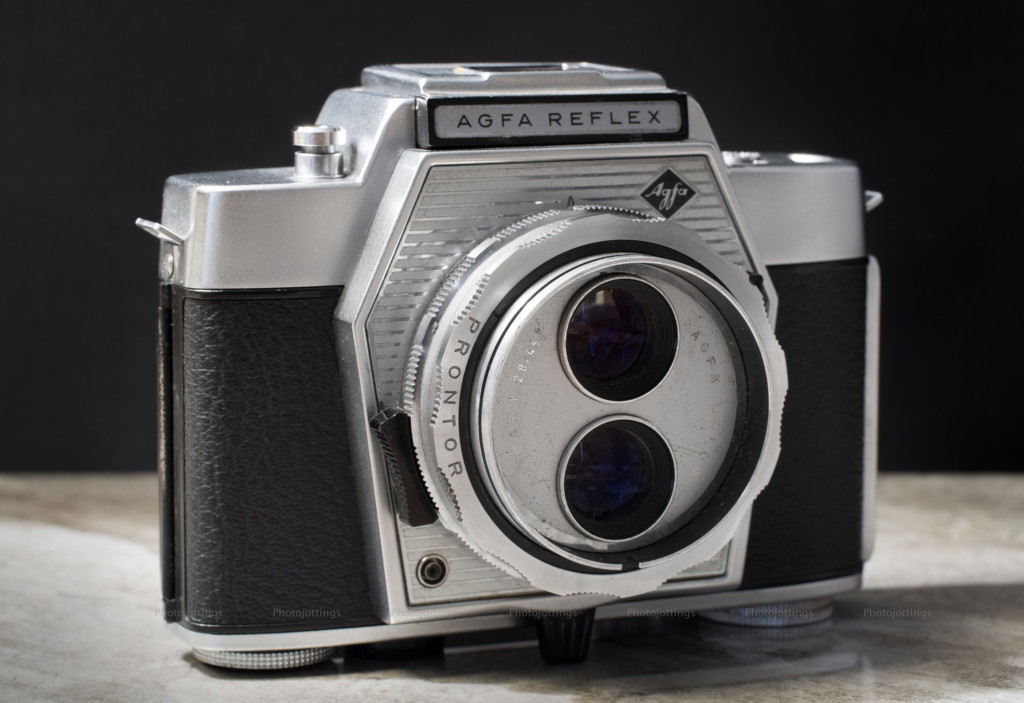 This odd looking beast is known as an Agfa Reflex in the Americas, or Flexilette in Europe and surrounding areas.  It’s quite large and heavy for a 135 (35mm) format camera, and one of the few TLR ‘twin lens reflex’ 35mm cameras made.  This was an impulse ebay purchase, and thankfully it showed up in good overall shape, and works correctly.

The gigantic circular front protrusion houses two lenses, one for taking the picture, and one for setting the composition and focus.   The taking lens is an Agfa Color Apotar 45mm F/2.8 three element type, and is surprisingly sharp with a smooth background blur, see pictures below.

The real oddity here is not just the two lenses in front, it’s the viewfinder that springs up and allows you to see a bright ground glass reversed image, along with the split image rangefinder patch in the middle.  The viewfinder even comes with a handy swing-up focus magnifier, which makes precise focusing easy.  The owner’s manual suggests different shooting situations where this type of viewfinder would come in handy; such as holding it over your head upside down to shoot over a crowd or fence, or at ground level while in a crouch position, or even sneaking shots around a corner so no one can see you!

The Agfa Reflex-Flexilette is not your average boring fixed lens 35mm camera, it’s really pretty neat, and quite different.  So with the intro out of the way, let’s start off with some specs and pictures!

Build material; mostly metal with a good fit and finish.

Aperture;  manually set and marked in one stop increments only, and there are no ‘detents,’ so in-between settings are possible.

Viewfinder; waist level type with ground glass and split image rangefinder; ; has a magnifier that flips up for critical focus, and it works well.  Eye level ‘sports finder’ has bright coated glass facing the front, and what looks like flat uncoated glass at the rear where you look through.  No parallax correction needed as the two lenses are so close together.

Shutter and speed; Prontor 500, has five straight aperture blades and stops down from F/2.8 to F/22, but doesn’t seem to close much at all from F/16 to F/22.  Has five shutter blades and a ten speed Prontor shutter from 1 second to 1/500s, plus bulb mode.

Flash; does not have a built-in flash or cold shoe, but has a PC socket for flash use.

Accessories for this model; an Ever-Ready carrying case, and a close up attachment, good for between 15-32″.

Other versions; there is an ‘Optima’ Reflex that looks similar, but it has a different body and a light meter. 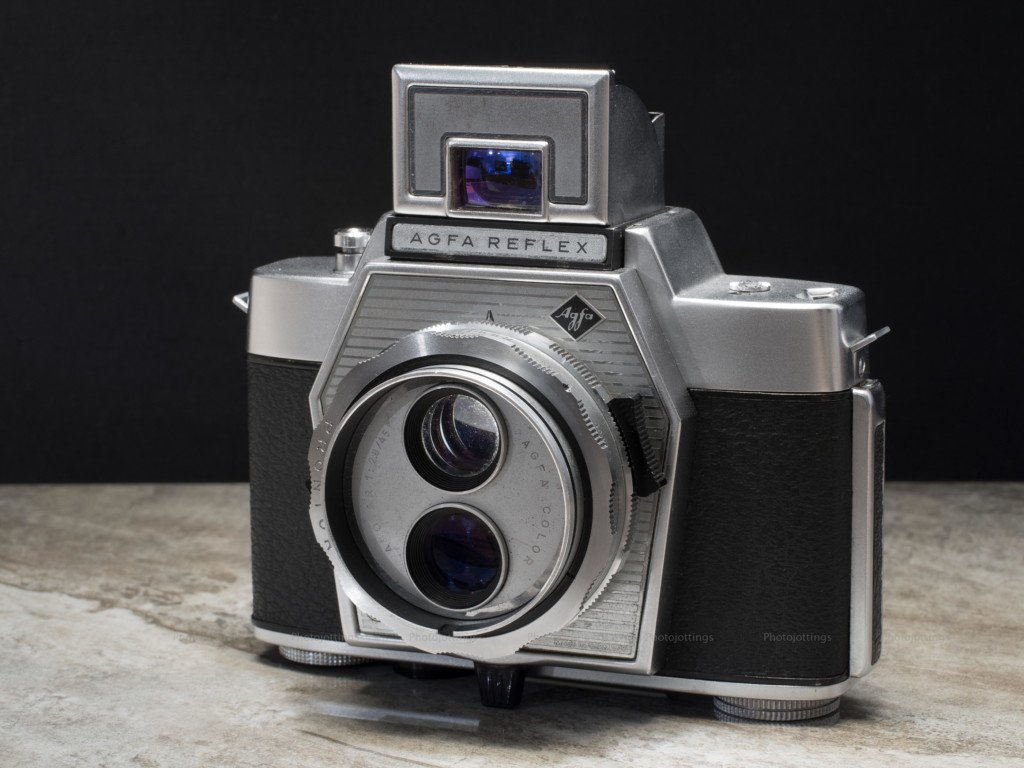 The Reflex with the waist level finder extended and ready to use; looks pretty neat right?   The top lens is used for the the viewfinder, and the bottom for taking pictures.  The neck strap lugs are stationary and do stick out a bit from the sides. 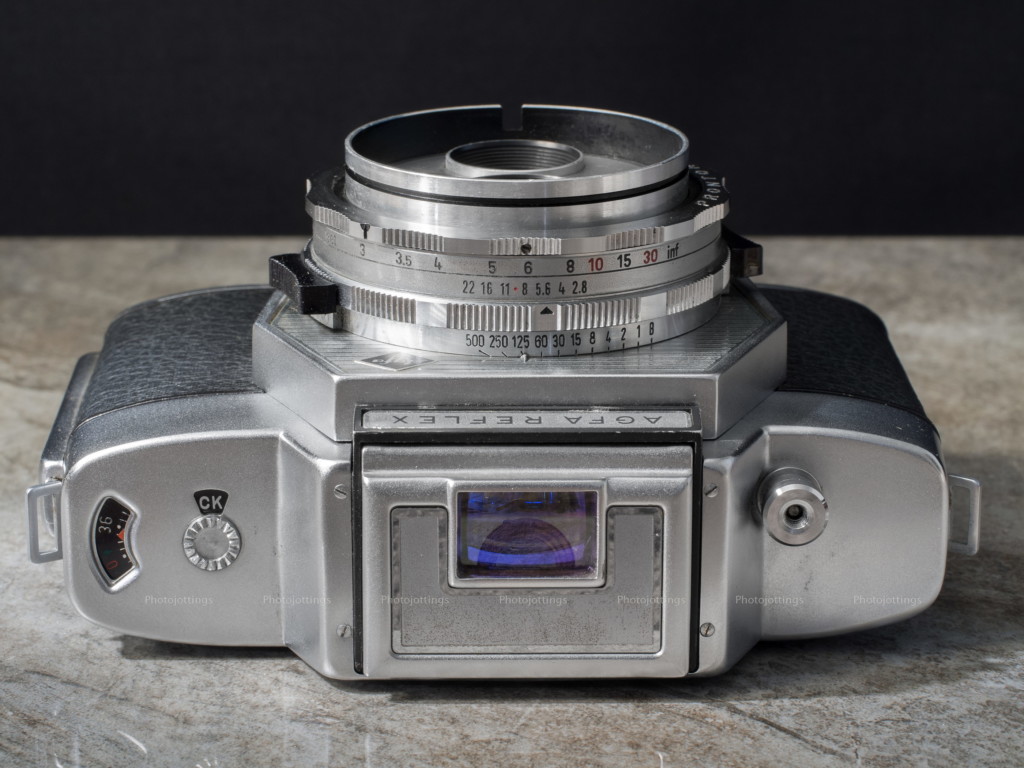 Moving to the lens settings we have; the inner ring closest to the body with black plastic finger pads controls the shutter speeds, the index mark is the tiny protrusion in the center of the lens board, here it’s set at 1/125s.  The middle ring with the black triangle index mark is for adjusting the aperture; this ring must be turned by gripping only the silver part, and without using the black pads that you see for the shutter speeds.  The outer ring is for setting the focus distance.  The index mark is a black line, and here it’s adjusted to about 3′ on the scale.

Notice the viewfinder top cover (with glass) has the same finish as the top plate, but I think originally it may have had a black cover, the same as the body coverings, and came off over the years. 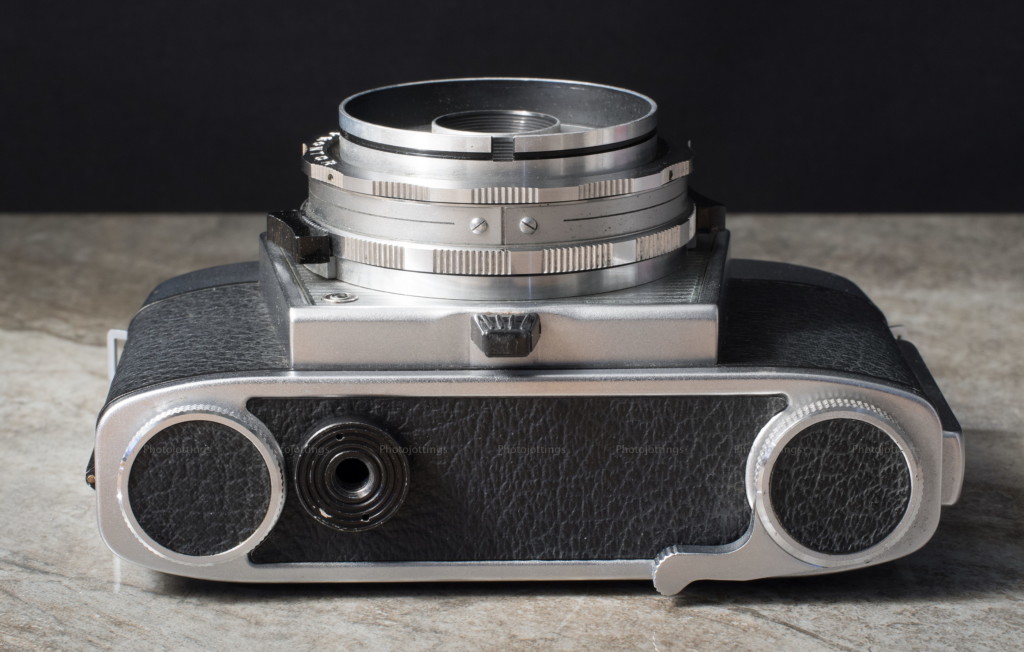 The bottom of the camera reveals the film rewind wheel on the left, an off center ¼-20 tripod socket, and the film advance lever on the right side as pictured; but will be on your left when holding the camera, so you’ll use your left thumb for advancing the film.  In the center, underneath the lens is a black plastic leveling foot so the camera will sit flat on a table or tripod.

Another feature not visible in other shots is the PC socket that’s just visible on the lens board, below the finger pad on the left in the picture.  There’s a slot cut in the lens ring visible top center, but I have no idea why it’s there other than maybe for centering a slip-on filter.  Also, there are no filter threads around the lens ring, so a slip-on type is your only option, although I haven’t see any for sale.  For those that want to scour the internet for such a filter; the outer diameter of the lens ring is 51mm, (2″).

There’s no coldshoe for holding a flash, so you’ll have to use a flash attachment bracket that mounts to the tripod socket, or one that’s off-camera on a stand. 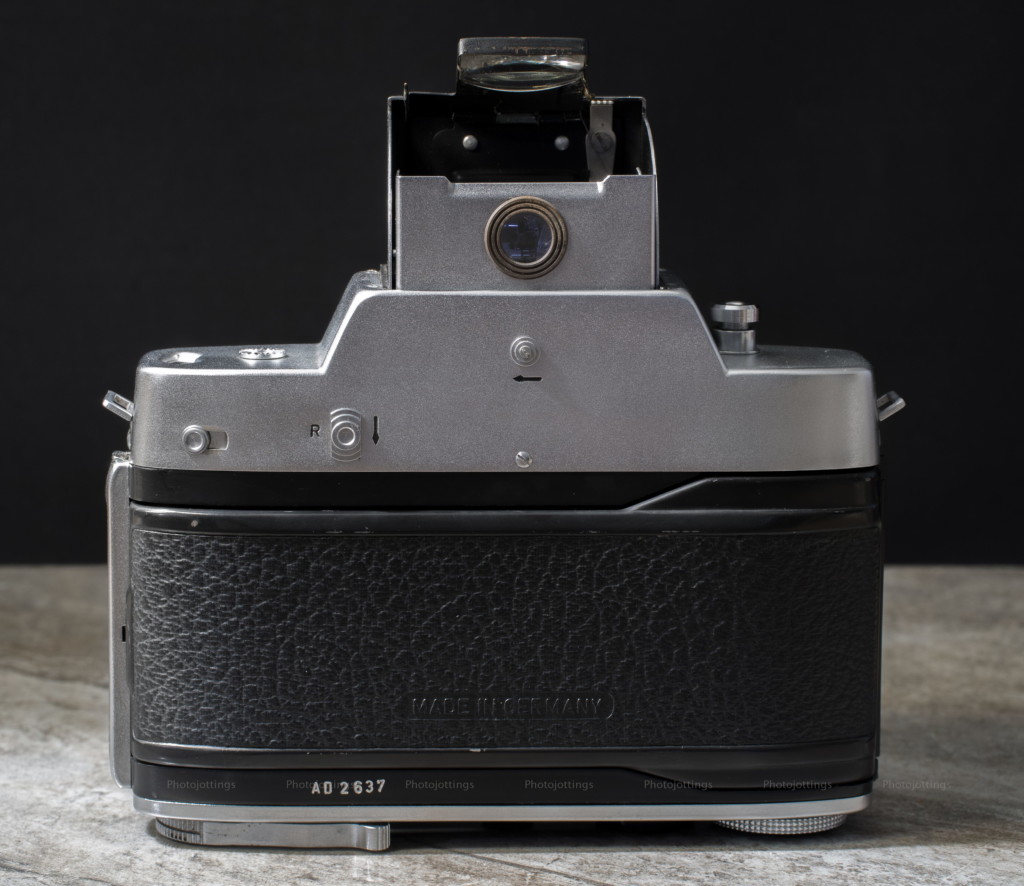 The back of the camera is rather sparse, but it does have a few important items worth mentioning.  The button with the slot is for advancing the film counter and setting the correct number of exposures for your roll.  You push the button to the right and the counter moves a couple of exposures at a time, so it might take 15 strokes to set it to 36 exposures.  The sectioned button with the ‘R’ and arrow are for rewinding the film back in the cartridge.  You push down on the button while simultaneously turning the (slightly pulled out) rewind wheel until you feel no more resistance, then it’s safe to open the back and remove the film cartridge.

The little button in the middle with the arrow pointing to the left is for opening the spring-loaded viewfinder apparatus.  Once the main viewfinder is open, we can see the notched lever that when pushed to the left extends the focus magnifier into the upright position. 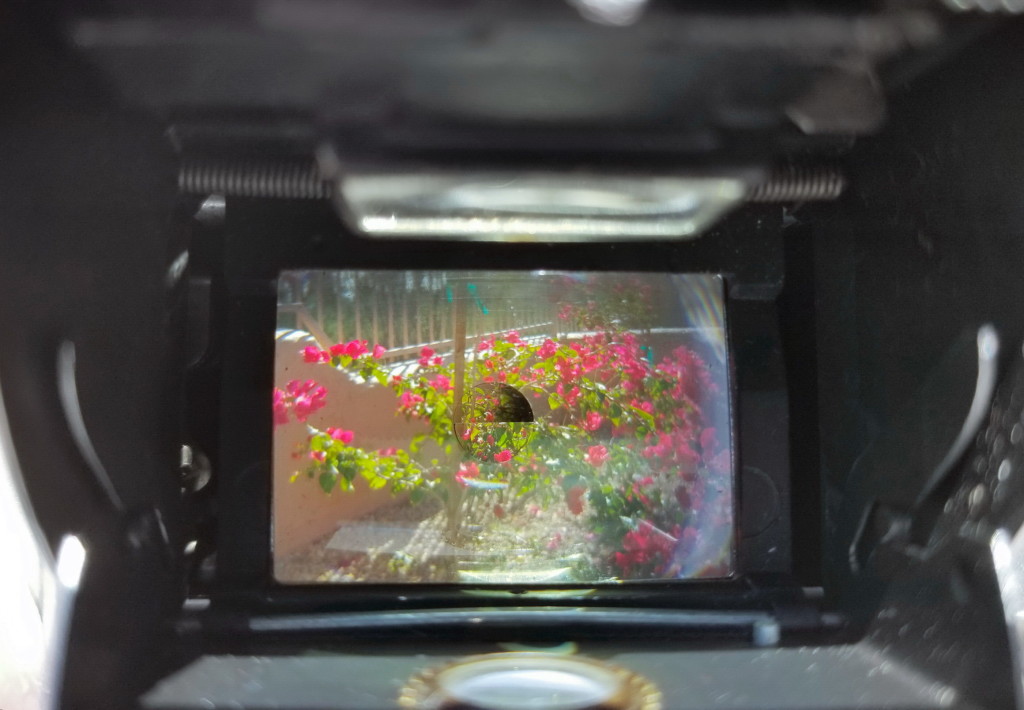 Looking down at the ground glass and split image patch.  The reversed view is actually quite bright and easy to set focus, especially when using the magnifier, which is in the stored position here. 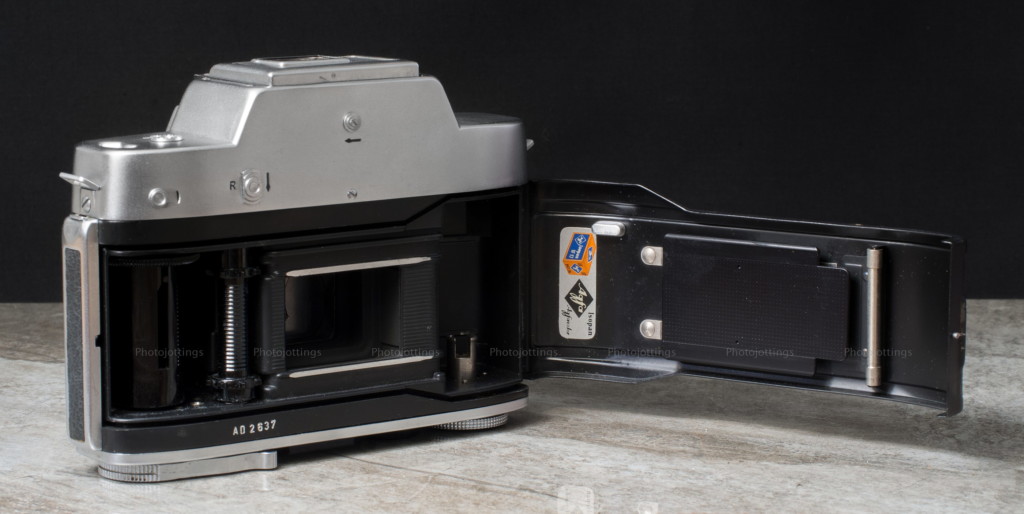 You open the back cover by pulling up the thin metal tab located under the left side strap lug.  With the back open the internals are quite ordinary; a metal film pressure plate, film tensioner and advance sprocket.  The take-up spool is made of plastic.  The sticker on the back of the cover recommends Agfacolor and Isopan film for your Agfa camera.

The Agfa Reflex is a large and somewhat heavy camera.  In fact, it’s about the same size and weight as a typical 6×6 folder, such as the one on the right.  As far as focusing is concerned, the Agfa Reflex is worlds better than the typical ‘guess’ type focusing of most folding cameras.  However, the 6×6 has over 3.5 times the area of 135 format film, and produces more detailed and less grainy images using the same film.

Here are a few samples for your viewing pleasure.  They’re 3800 pixels wide, which shows all the detail present in the negative.  Click image for a larger version.  Scanned on a Nikon Coolscan 9000 ED.  All pictures taken with Kodak Gold 200. 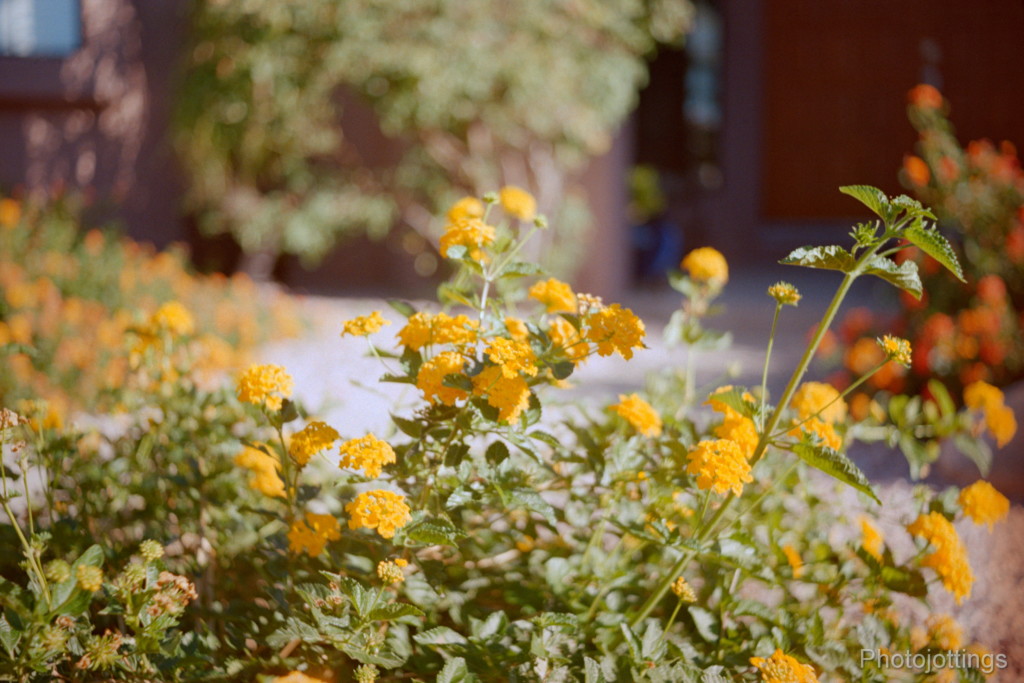 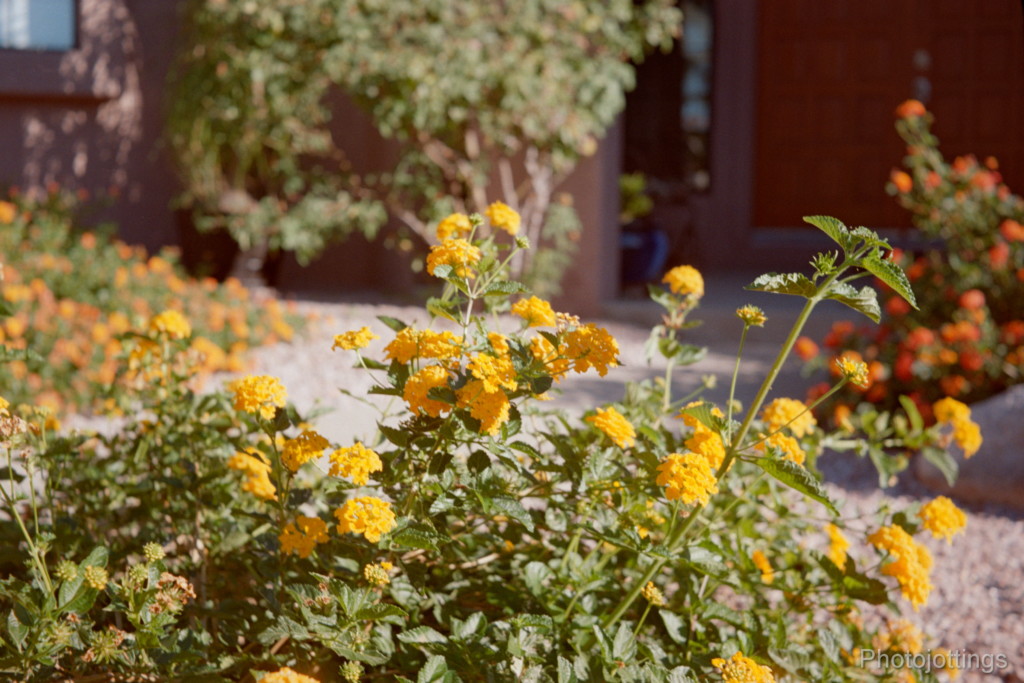 F/5.6-8.  Very smooth background blur or ‘bokeh.’ The Agfa Apotar 45/2.8 is one of the best lenses I’ve tested for this.  The pentagon aperture shape is more noticeable when stopped down. 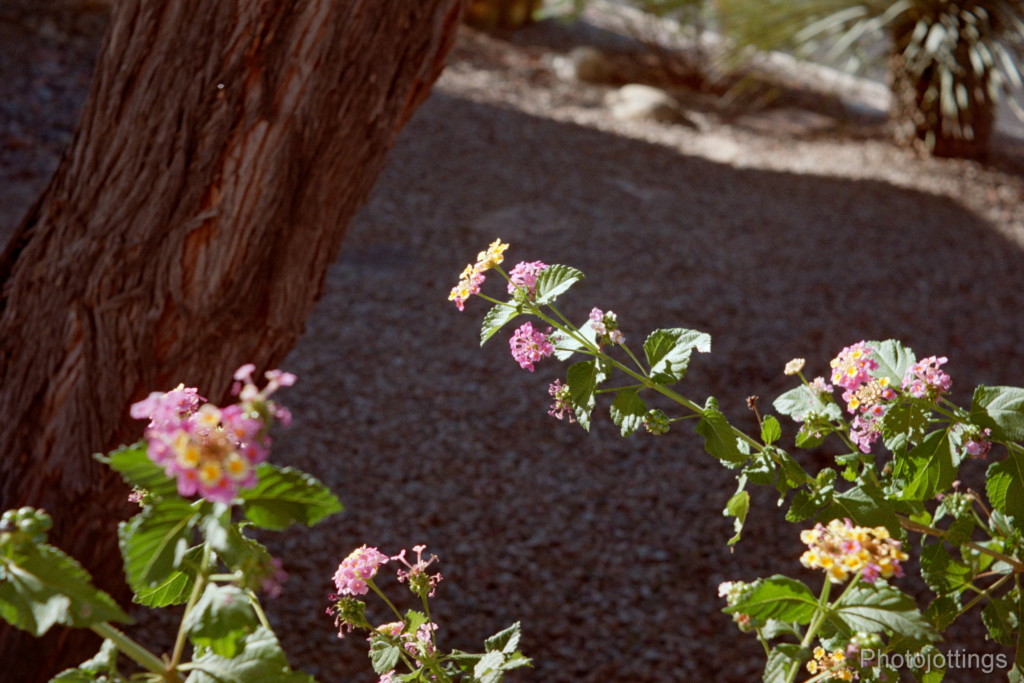 F/8.  It’s easy to get precise focus like this when using the magnifier for focusing.  Focus is on the center branch. 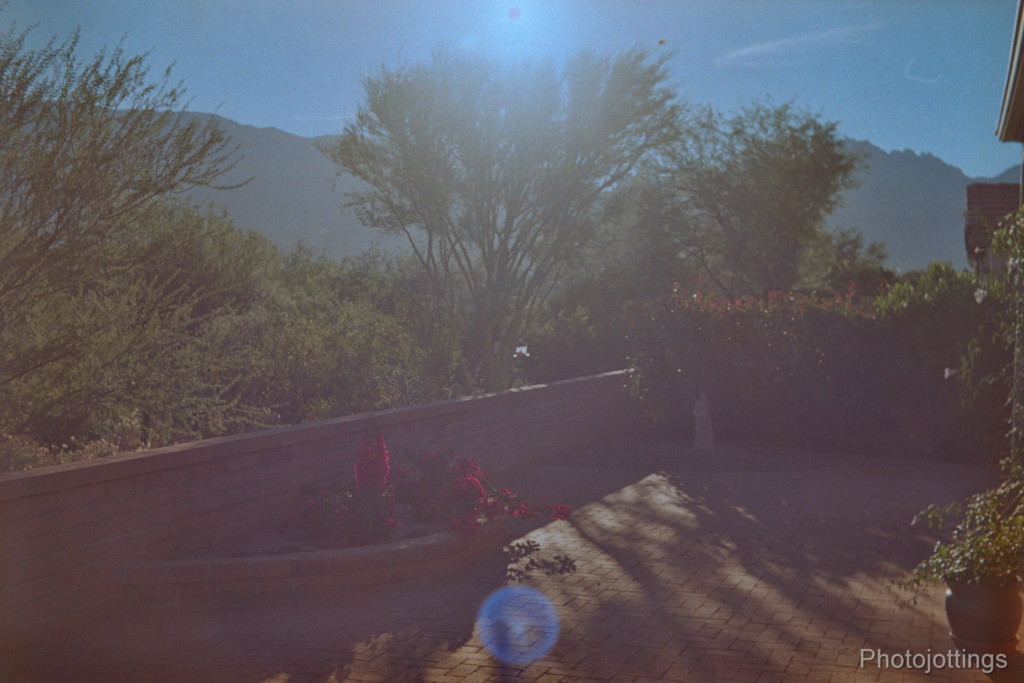 F/8.  The sun causes some ghosts, and an overall loss of contrast.  I under-exposed this shot, should’ve added another stop or two.

All test shots are displayed at 3800 x 2534 pixels wide when enlarged, and that’s about all the resolution included in the film.  Scanned on a Nikon Coolscan 9000 ED. 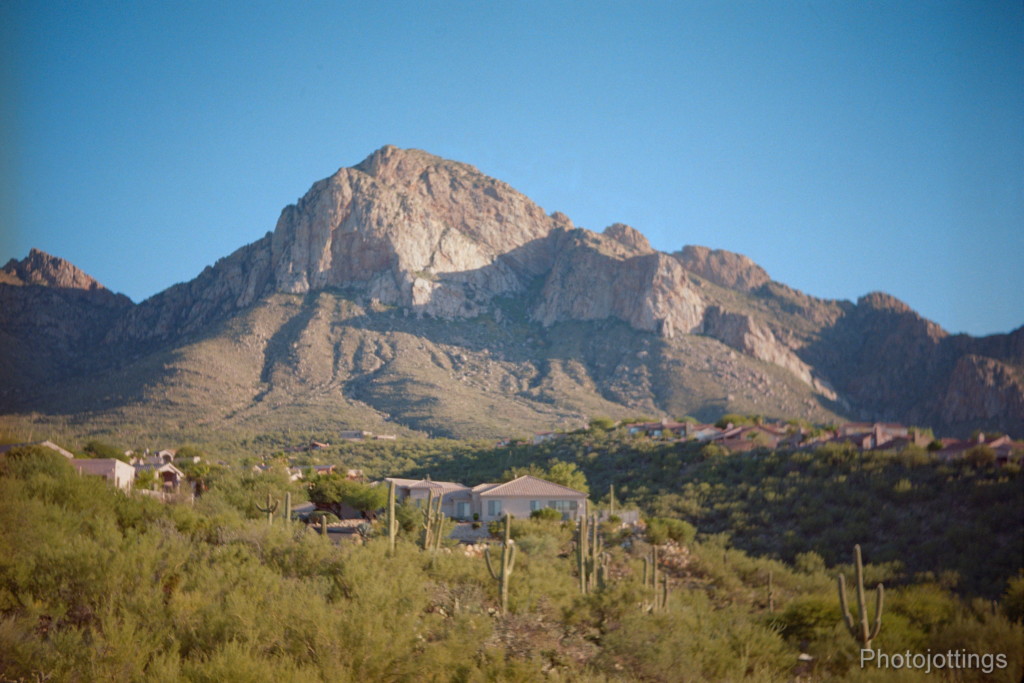 F/2.8.  I see a lack of resolution and contrast all over, mostly because I apparently jiggled the camera—even on a tripod?  This is not the only shot that shows movement when set at 1/500s shutter speed, (which I used here), it makes me think the fast shutter action is causing some issues, although that has not happened in all the other shutters I have like this, so it’s weird.  Heavy light fall-off in the corners. 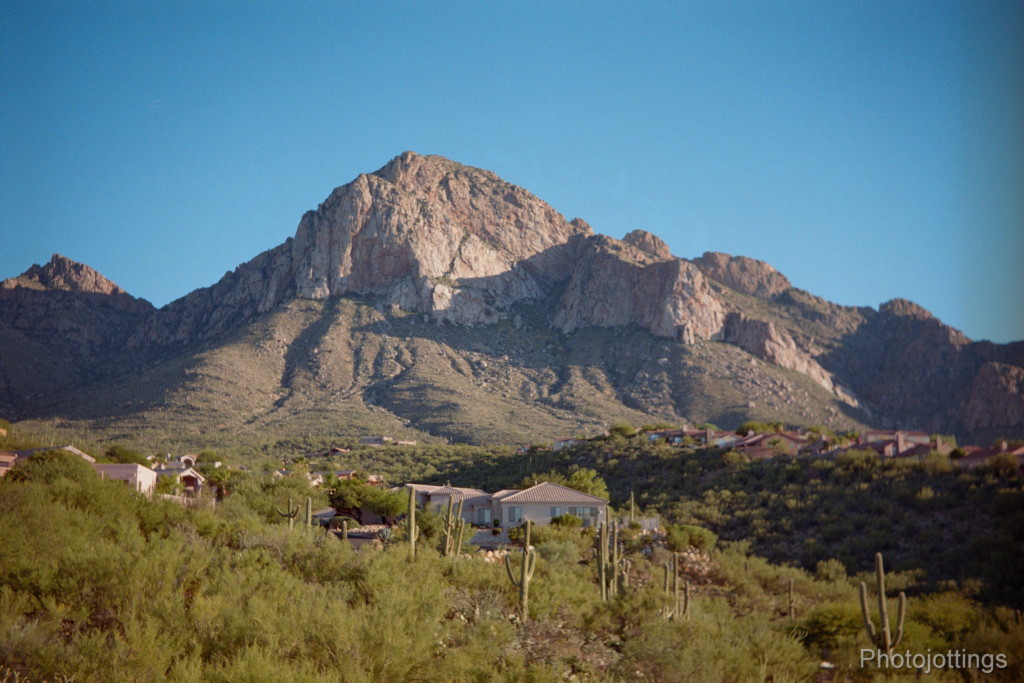 Moving down to F/4 seems to add quite a bit of contrast and resolution, and eliminates problems with movement.  The sides are still soft. 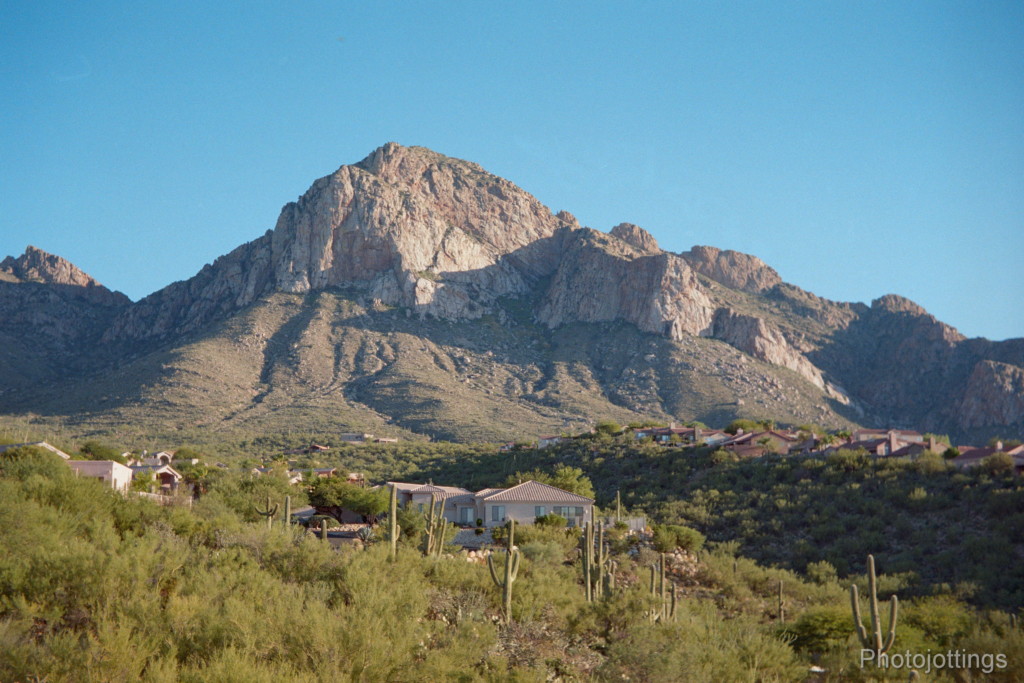 F/5.6.  The sides sharpens up nicely, and light fall-off is greatly diminished. 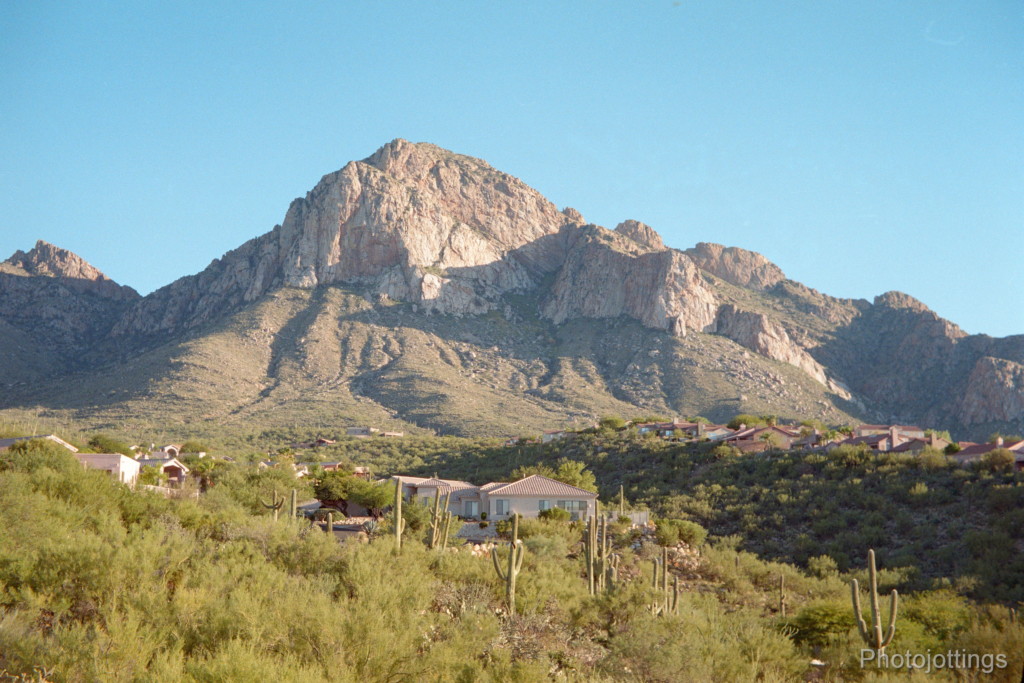 F/8. The whole image is sharp with good contrast. 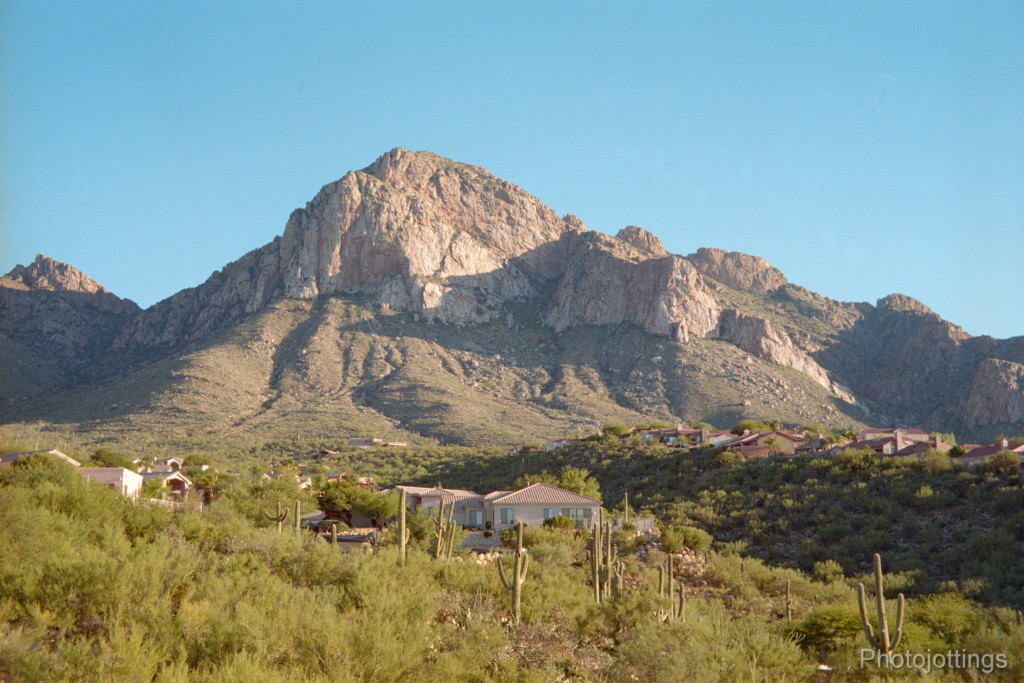 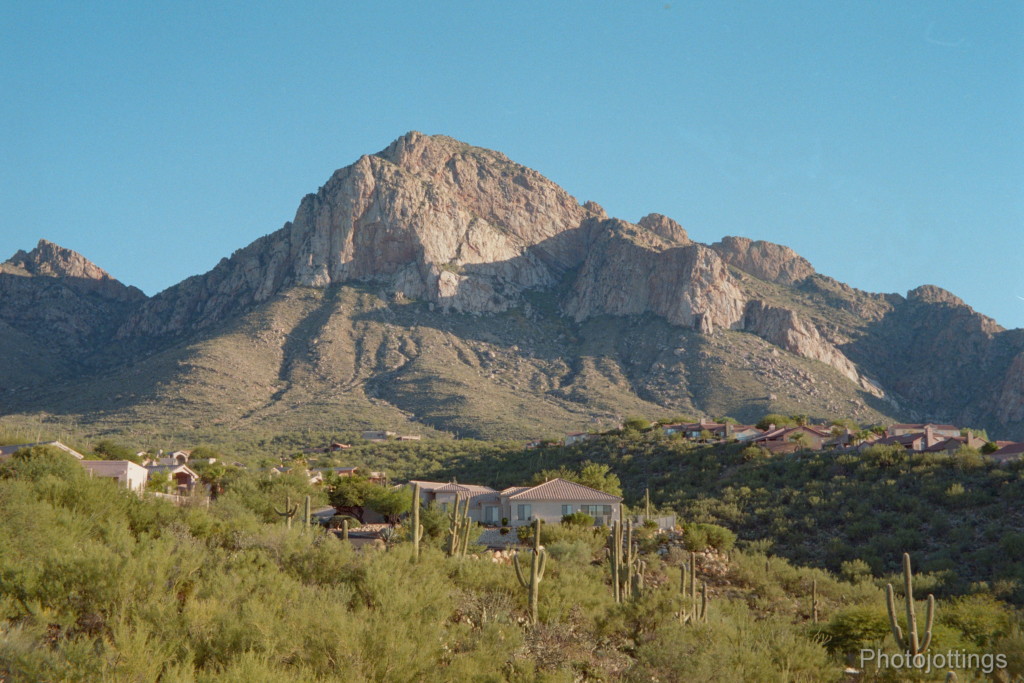 F/16.  Dulling diffraction shows up here, but not bad.

The Agfa Reflex or Flexilette is a unique, and pretty fun camera to take with you to those boring parties with family or friends; you’ll spend time explaining the camera features, and how it works, and then it’s time to go home, yay!!!

The are a few positives and negatives to report.  I do like the lens, it’s quite sharp, with good contrast and color, but not great.  The waist level finder with magnifier is very helpful in getting precise focus, even without glasses if your eyesight is not poor.  The shutter speed and aperture settings are pretty straight forward, no partial stops and silly exposure values for you to figure out.  With that said, there are a couple of downers when using the camera; first, it’s quite large and heavy, about double the weight of a traditional viewfinder camera with a similar lens and features.  Additionally, the cool viewfinder adds to the time it takes to snap a good picture.  By the time you pop-up the viewfinder and magnifier, then set the focus via rangefinder, set the appropriate aperture and shutter speed, you’ve lost the light, or the ‘decisive’ moment.  Oh well, although it’s probably a little quicker than using an uncoupled rangefinder camera.

Anyhow, I do like the Agfa Reflex or Flexilette; it was fun to run some film though it, and thankfully my copy worked well, even the shutter speeds were accurate.  Would I take this one on vacation for those once in a lifetime shots?  No, it’s just too slow for me, but I’d take this one or this one as a secondary camera.

A thumb and a half up for the odd-ball Agfa Reflex!  Please consider buying through my links and help support the site. Thanks for visiting!