The Sony DT 16-105mm makes a good “kit” lens offered by Sony on the latest camera bodies.  With a 6.6x zoom and focal length equivalent of 24-157mm, You’re covering a nice range, and a very similar range to the Sony Carl Zeiss 16-80mm.  Which one should you buy?  Which one do you really need?  Read on, or go directly to the bottom of the page for instant gratification.
Let’s talk about performance.  Both lenses focus quickly and accurately, especially with the A700.  The focus rings have a nice wide grip area and make it easy to focus manually, although it’s very quick, with some slop.  Zooming is about right on each lens, (the CZ seems a little sticky), less than a quarter turn is needed from wide to full zoom, that’s very common for Sony lenses though.  They’re also tight enough so you won’t get lens creep when walking about with the lens hanging down.  Neither have a  zoom lock.  Both lenses have two aspheric elements and the 16-105mm has an ED glass element according to the SonyStyle website.  The CZ 16-80 isn’t listed as having any ED glass.
The Carl Zeiss 16-80mm is actually a bit lighter than the Sony 16-105mm, a little surprising.  Both are nearly identical in dimensions and outward appearance, though the Carl Zeiss has a more “flat” matte black finish than the 16-105mm.  The similarities end at the front element.  The surround is totally different on the Carl Zeiss model, even looking beyond the front element you can tell the glass/construction is different inside.   Also, the CZ 16-80mm has a one piece extension barrel, the 16-105mm has a two piece extension barrel, see product shots above.
Sony DT 16-105mm F/3.5-5.6 aperture/focal length guide below.

Bokeh.  The Sony DT 16-105mm and Carl Zeiss 16-80mm have the same basic bokeh,  but the Carl Zeiss is better at 80mm and F/4.5,  which the 16-105mm can’t do at that length, see guide above.  See photo comparisons towards the bottom of the page.Distortion.
Distortion on both lenses is strong to moderate at 16mm, and moderate at full zoom.  The Sony Carl Zeiss is a little better at distortion correction than the Sony 16-105mm, but not by much.  The top image on each set is the Sony 16-105mm, below that is the CZ 16-80mm, then the very bottom image is the full telephoto 105mm which is not available on the CZ lens.  Look at the text below the image for a description, hopefully this isn’t too confusing.Lateral color fringing.  fairly good control.  In normal situations and conditions, there isn’t much to be found.  It’s mostly along the edges of the frame, red/purple dominate.  The CZ 16-80mm has a little better control of CA, see cropped images farther down the page.
Color is the same, like the other Sony lenses.
Lens flare/Ghosting is not much of a problem, though at wide angle both exhibit strong ghosting, but only when the sun is very close or in the picture.  The CZ 16-80mm has a bit of flare also.  I think the Sony 16-105mm is actually able to control ghosting and flare a little better than the CZ 16-80mm.  See photos below.  In this case, I’ve deliberately taken the shot with the sun just in the corner of the frame (at 16mm) to try and make a mess of everything.  If this were a normal landscape type shot, you probably wouldn’t notice the lower right hand reflections, and the upper left hand blobs would be pretty easy to clean up in Photo editing software.  Sometimes, the ghosting like this can add interest to an image, I think.  On the telephoto end, the image is mostly clean on both lenses.  The included petal hoods do a good job at protecting the front element from ghosting, but use your hand for the best control.
Light fall-off.As you can see below, light fall-off or corner shading is moderate on both lenses wide open at F/3.5, and it shows up in pictures, see below.   At F/8, things look better, though light fall-off doesn’t disappear completely on test charts, it’s not visible in real shots at F/8.  Towards the telephoto end, there is none to be found on both lenses.  Some people like the look of dark corners, I’m not one of them.  It just bugs me.
Examples of dark corners or light fall-off, whatever you want to call it, in actual shot. 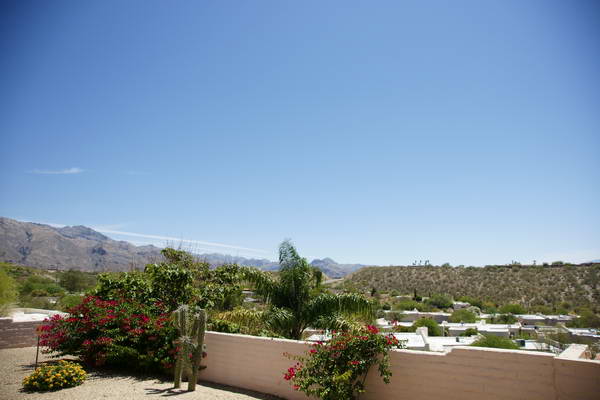 Some people like it , some people don’t.  16mm @ F/3.5.  The same for both lenses.  You wouldn’t use F/3.5 in full daylight anyways, so this is the worst case on the two lenses.  This is also the actual full scene of the yellow flower corner shots below.

These are wide angle 16mm corner crops.
The Carl Zeiss 16-80mm has sharper extreme corners wide open, but you can see it doesn’t cover too much area, look at the left side of the shot, then at the right side.  The difference isn’t so noticeable on the right side of the shot.  Full scene above.Telephoto corners below. 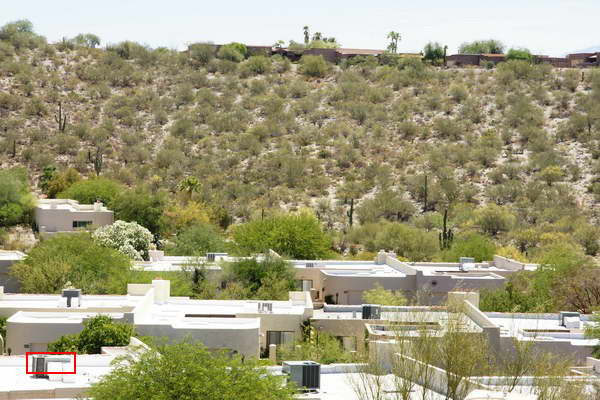 This is the general scene for the corner crops below.

These two crops illustrate the difference in 80mm and 105mm, or 120mm and 157mm equivalent.  Also, you can see CA is more plentiful in the 16-105mm.  Both telephoto corner shots were pretty sharp at their maximum aperture, varying little stopped down.
Center crops.  Just for fun I thought I’d compare the two lenses at 80mm, the max for the CZ.  The EXIF data is identical for each shot, (80mm F/8 1/640s -0.7ev) but you can see the focal length and exposure comes up different for the 16-105mm, or vice versa.  I have a feeling the CZ is accurate at 80mm, since it is at full zoom.  The data for the 16-105mm is more likely to be off since it still has additional focal lengths to record and the index marks might be a hair off.  It’s no big deal.  I like the 16-105mm shot better, but that doesn’t make the CZ bad, just different, maybe because it’s farther away and appears under-exposed–but that’s at -0.7ev, at neutral exposures the Carl Zeiss shot is more accurate for the image in my opinion.  This is a direct comparison and wouldn’t matter in actual use.The Carl Zeiss is pretty sharp wide open at all apertures and focal lengths, though at 16mm, you have the best sharpness when you stop down to F/5-5.6.  The Sony 16-105mm needs about a full stop down or so to be nice and sharp in the centers, throughout the zoom range, one stop down also helps the corners.  At F/8 you can’t see any difference between the two lenses.

Bokeh cropped examples from both lenses at 80mm.

The bokeh of the CZ lens is a little better, mainly due to the fact that you have F/4.5 available at 80mm, not so with the 16-105mm.  At 105mm and F/5.6, it still isn’t as good as the CZ at 80mm F/4.5.  The both looked very similar at 80mm and F/5.6.  Look at the lower right area in the images for noticeably smoother results from the CZ lens.  Some people like smooth backgrounds and feel it’s important to the image.  I’m one of them.  Both images are 100% crops from the original.Let’s check out the macro capabilities of the two lenses.

Both macros are sharp, there was very little difference between F/5.6 and F/11, this is good news.  The macros looked their very sharpest at F/8, from both lenses.

This is a 100% crop from the original macro image taken with the Sony A700.  The CZ has a slightly larger macro, .24x, but the 16-105mm image is slightly sharper and more detailed at .23x.  You have to pixel peep to notice it.  Disregard the white dirt spot on the CZ crop.Below we have the standard macro crops.

Click images below for the full cropped images.  Average file size: 285k.  You’re getting the same thing with the two crops above though.

To sum up the two lenses: The Sony 16-105mm has more CA than the Carl Zeiss 16-80mm, but only under harsh contrast.  The colors and contrast are similar.  Barrel distortion is about the same at wide angle, and the 16-105mm has a bit more pincushion at the long end than the CZ.  Light fall-off is about the same on both.In the end, you have the more expensive ($120) Carl Zeiss 16-80mm F/3.5-4.5 performing a little better in the corners, and in CA.  It’s also pretty sharp in the centers wide open, the 16-105mm benefits by stopping down just a hair, though the 16-105mm macro shot is a tad sharper than the CZ.  Do some of those deficiencies make the Sony 16-105mm unattractive?  If you don’t really need the extra focal length, and need a little extra speed, and, like to look at your pictures at 100% screen size, just go out and buy the Carl Zeiss 16-80mm.  For all others, get the less expensive Sony 16-105mm F/3.5-5.6.

Here’s some quick observations about the two lenses: