Did you ever wish you could have a better, and bigger main LCD on your camera, one that makes it easier to focus and compose on?  The Sony CLM-V55 is one such product.  This screen is great for old folks that can’t see too well anymore, or anybody else that has problems seeing the standard 2.5″ or 3″ camera LCDs.  Even if your current camera screen is VGA quality, like most Sony DSLR, SLT and NEX cameras screens are now, the Sony 5.0″ portable monitor is a big step up. 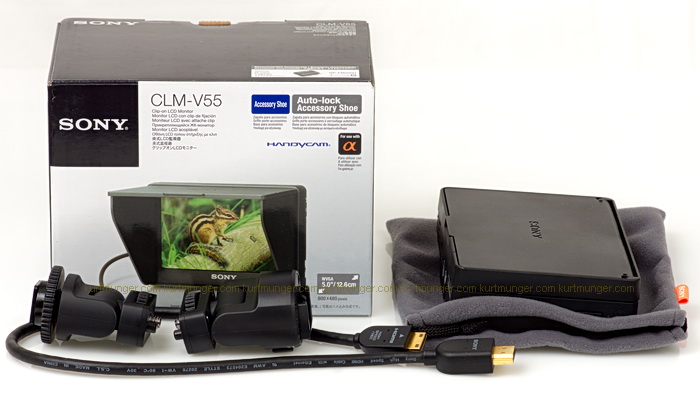 Inside the box is the monitor, folding hood, accessory shoe for Sony, and shoe adapter for other brands,  gray carrying pouch,  18″ (450mm) HDMI cable and owner’s manual.   Funny, the pouch has an orange tag stitched at the seam with “Sony” printed on it, a rip-off of the “levi’s” tag.

You don’t need to have a Sony camera to use this item, any camera or camcorder that supports HDMI output will work.

This is a quick review of the Sony CLM-V55 monitor, covering box contents, use on still cameras, with, and without live view.
When you open the box and take out the monitor, it looks a little small and disappointing, but after you use it for a while, then go back to the small camera screen, you really miss it.  The screen quality is very good, with excellent contrast and colors, although the camera screen seems a little more colorful for some reason.  However, the CLM-V55 screen can be adjusted for brightness, contrast, color tone and color temp, plus other stuff.  There is also a “pixel-by-pixel” magnification feature which uses the whole screen, but if you’re using it to focus with, live view focus check (on some Sony cameras) does the same thing.
The entire screen (aspect ratio 15:9) is not used unless pixel magnification is selected, all other use has very narrow black bands at the top and bottom, or along the sides depending on the display selection.
Viewing angle is very wide, if you have the shade on, the screen looks the same from all viewable angles.
The screen is light-weight and small enough when folded up to fit in a back pocket comfortably, but don’t sit on it!  You really don’t notice the weight when mounted on a mid-size to large camera.
Thoughts from my somewhat limited use on still cameras; for cameras without live view and video, like the A700/900 etc—still worth a hard look.  If you have trouble seeing everything in the camera screen, or your camera screen doesn’t tilt, this LCD would solve those problems.  For live view cameras with tilt screens; it would be a nice accessory as you can see the focus point much easier, and shooting and watching video is more enjoyable.
The Sony CLM-V55 is pretty expensive, especially if you buy a battery for it, (there is no battery included).  You can get a cheap laptop for the price of those items, but a laptop is not very handy, and cheap laptops have awful screens.  If you don’t use a tripod much or shoot video, it doesn’t make much sense to get this.  But….if you do use a tripod often for indoor photography, or shoot a lot of videos, this monitor is very addictive. 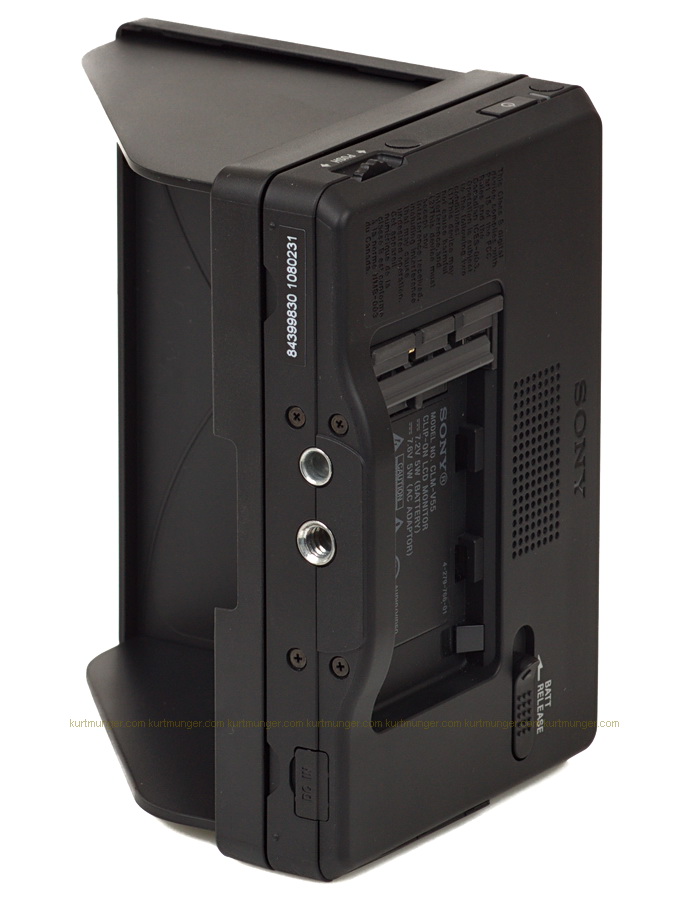 This is the back of the monitor showing the battery compartment and sun shade (hood) extended, this device just snaps on the monitor and folds up when you don’t need it.  A battery is not included, but takes the same one (NP-FM500H) as most intermediate and pro Sony DSLRs.  It also takes some big video camera batteries, like the NP-QM71D or NP-QM91D.  Note; the battery level for the CLM-V55 is not indicated on the LCD, the little light by the power button turns green when the batter has power, and red when it’s low.  It’s supposed to turn white in AC mode, but I couldn’t confirm that because I don’t have the AC adapter.

The speaker (monaural) is on the back under all the holes.  It also has a 3.5 stereo mini jack for head phones, and the monitor has a sound level adjustment.

The monitor has a standard 1/4″-20 tripod socket, with the other hole being a plug receptacle to stop rotation.  There is no need to mount the LCD to the camera’s hotshoe, it uses no power or signal, the hotshoe is just providing a place to mount the screen.  You can put it on a tripod beside the camera if you want.  There’s a bracket made by Sony for mounting the screen and camera together using the camera’s tripod socket. 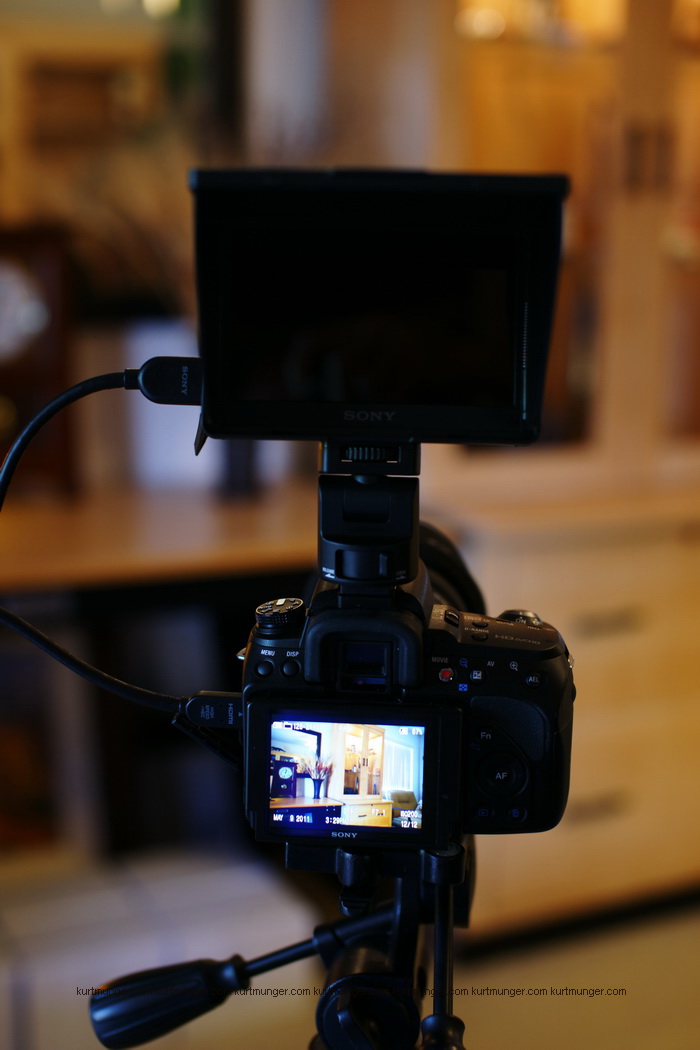 Mounted on the Sony proprietary hotshoe and plugged in with included HDMI cable.  You can only view one screen at a time, if you turn on the CLM-V55 monitor, the camera screen turns off automatically.  There may be a way to keep both screens on, depending on camera HDMI control.

On the Sony A900/700, when you turn off the CLM-V55 power, both screens are blank, you need to unplug the HDMI cable to get the camera screen to power up.  Again, there could be a work-around, but I’m not aware of any at this time. 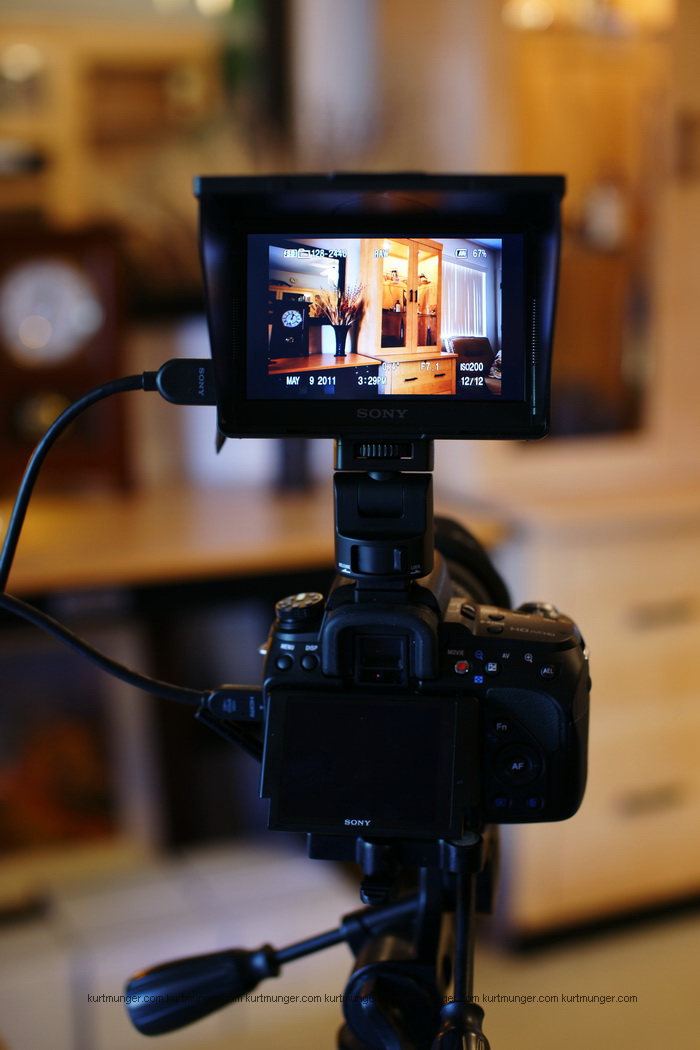 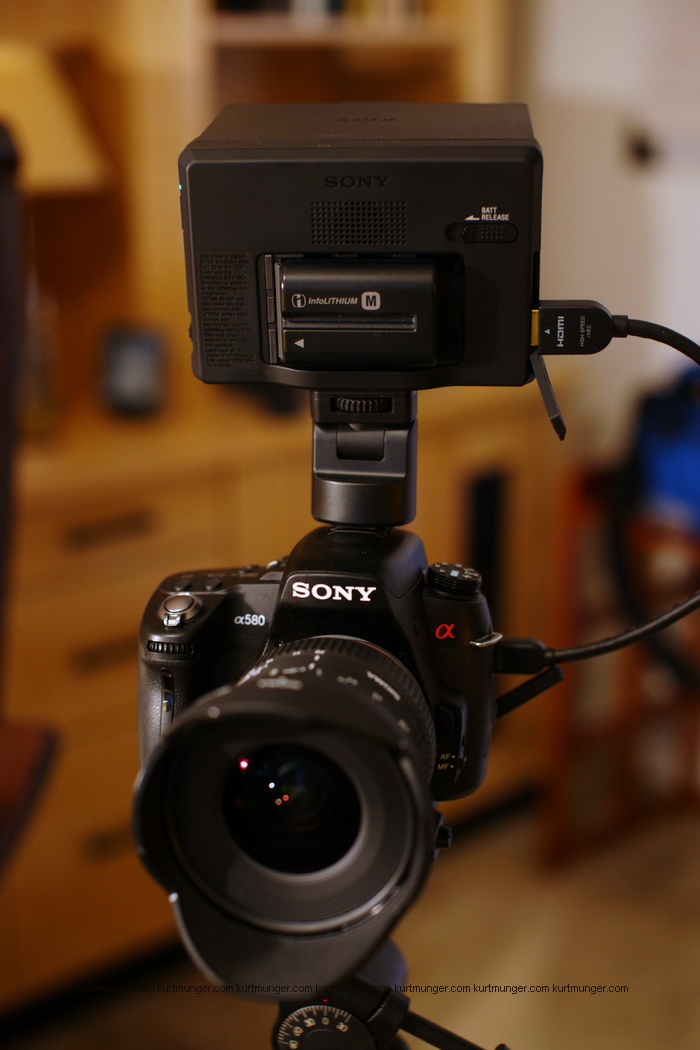 This is the front view, showing the battery mounted in place.  The LCD swings around to the front if you want, and back and forth 90°. 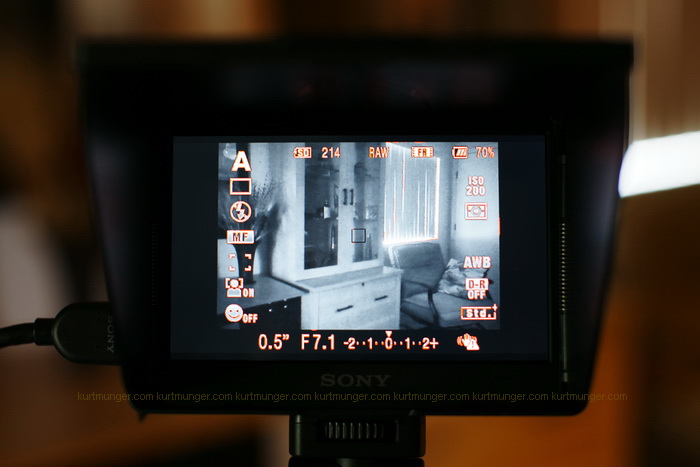 This is the “peaking” screen, it turns black and white in this mode, with the “peak” in-focus areas in color.  Even the normal display data is rendered as as “peak.”  This feature isn’t very handy in my opinion, it shows areas that are supposed to be in focus, but really aren’t.  There seems to be a broad focusing range for being “peak” and you’ll wind up with an out of focus shot if you strictly go by this feature.  I’d rather just check the screen.  In this shot, the window blinds are showing “peak” but everything in the image is sharp, not just the blinds.  I was focusing on the curio cabinet.

That’s it for this review, if you’d like to support the site, check out the Sony CLM-V55 clip-on monitor by using the link, thanks!