The unique (or goofy) Pilot ‘Super’ 6×6 SLR was only produced for a very short period of time, (between 1939-41), and is not widely known even among camera collectors.  I just happened to be perusing ebay’s film camera category late one evening and came across this model in excellent condition.  One word of caution here; alcohol and ebay’s ‘buy it now’ option don’t mix well, and you might be surprised at what shows up in your parcel box or front door a few days later.

The Pilot ‘Super’ (not to be confused with the Michelin tire of the same name), was a big upgrade to the simple, (and earlier) Pilot ‘6’ and was produced by KW or ‘Kamera Werkstätten’ out of Neidersedlitz, near Dresden Germany.  Neat features include: a cubic form, (preceding the Hassleblad design by quite a few years), single lens reflex design, a guillotine type four speed shutter, eye level finder, extinction meter and at least four lenses to choose from.  The lenses from least to most expensive are; F/4.5, F/3.5, F/2.9, and a ‘long focus’ lens for an extra $20.  Go here for possibly a more thorough list of the lenses.

With the introduction out of the way, let’s head back to the early days of WWII and see what the Pilot ‘Super’ Kamera has to offer!

Viewfinder; viewing ground glass with focus magnifier.  No Fresnel screen, so the view is dark, especially when the aperture is stopped down past F/5.6.  Has an ‘eye level’ direct viewfinder for framing subjects without using the ground glass.

Distortion; none of my images show any discernible distortion, but I did not get a good straight line near the edge for a good test.

Light fall-off; heavy “corner shading” when shooting wide open at F/2.9; it gets much less noticeable as you stop down.

Back ground blur or “bokeh;” looks so-so when close to the subject at wide apertures; see image below.

Lens; 75mm F/2.9 KW anastigmat uncoated either three or four elements in three groups; front-cell focusing.  The collector that I bought this from claimed it had a four element ‘tessar’ type lens.  I took the lens apart but could not determine with any certainty whether or not is contained two cemented elements in the rear group.  Judging by the prices for the lenses in the ad below, It could well be a 4/3 design.  The KW F/2.9 Anastigmat was about 38% more expensive than the lowest priced lens, which is substantial; $52.50 was a lot of money in the late 1930s; and it would buy a Rolliecord with Ziess lens.  With all that said, the lens seems to perform like a mediocre three element.

Flash; no, does not have flash synchronization.

Accessories for this model; different lenses and a leather carrying case and neck strap.

Crippling features and omissions; mirror whip is a problem,causing movement, even on a tripod.  Dim view on ground glass.

Problems;  minor light leaks at wide apertures on my copy.

Instruction manual here.  Be sure and tip the site owner for this thoughtful service.

The price for the F/2.9 lens is a big jump from the entry level F/4.5 offering, and a lot of money back then.  The camera pictured in the ad matches mine perfectly.  There were slight variations of the Pilot Super noticeable only if you look at all the images available online. 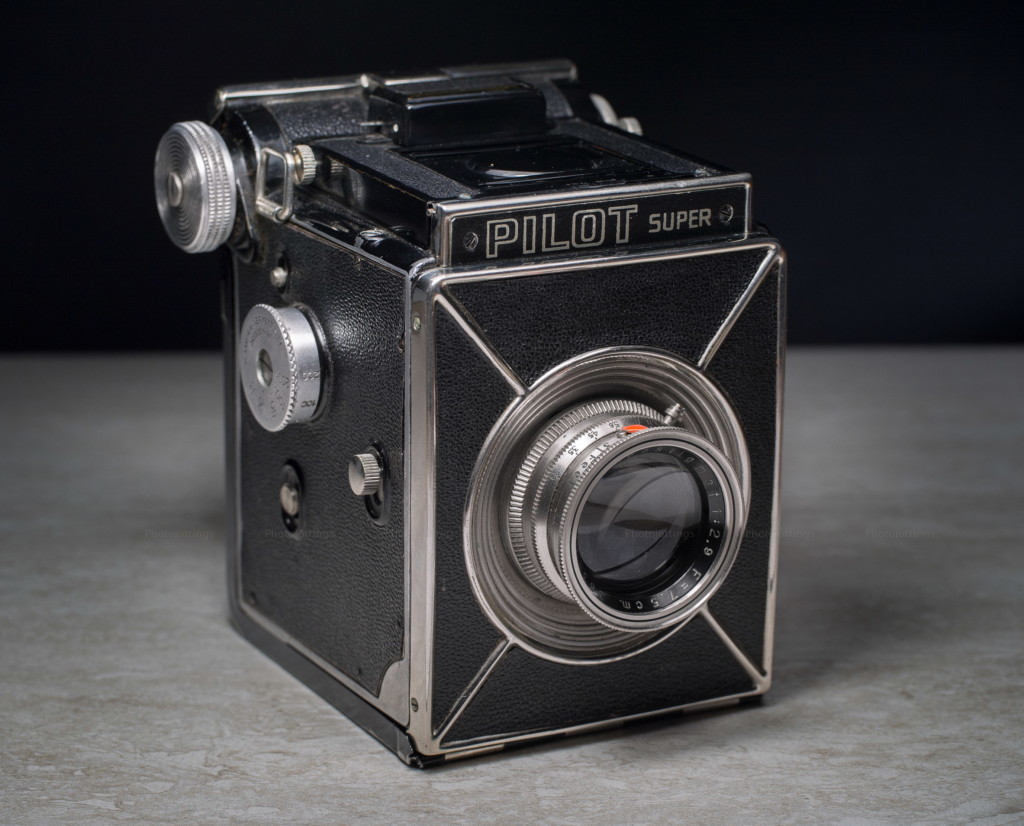 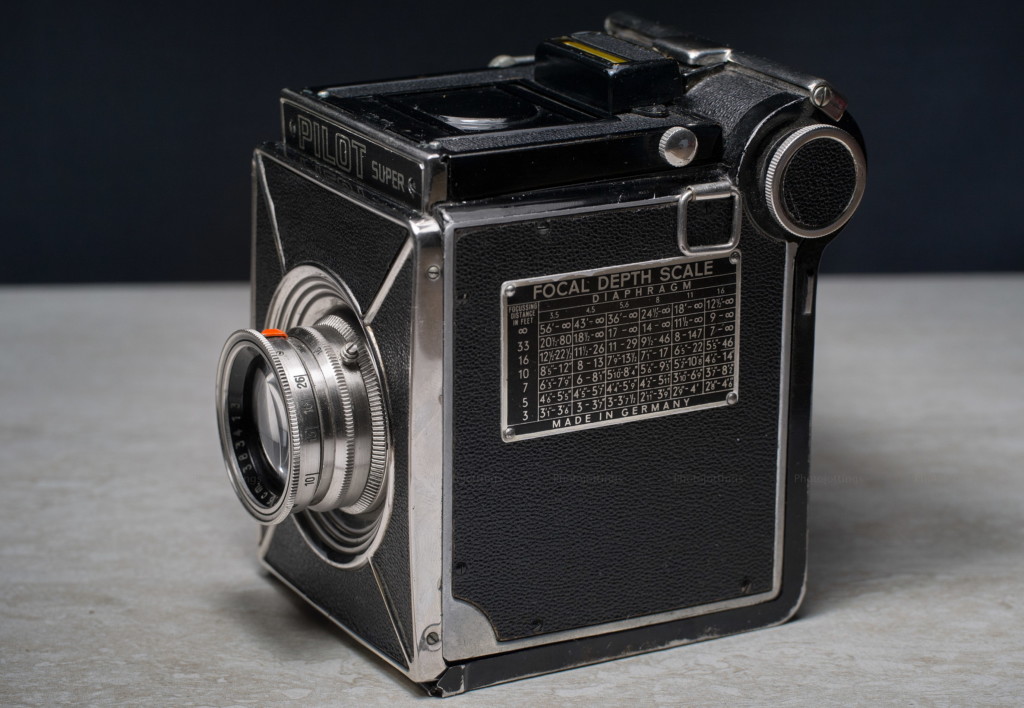 A ‘focal depth scale’ adorns the left side of the body; however, the aperture on the scale only goes to F/3.5 for some reason, and the distance of 33′ is not marked on the camera lens. 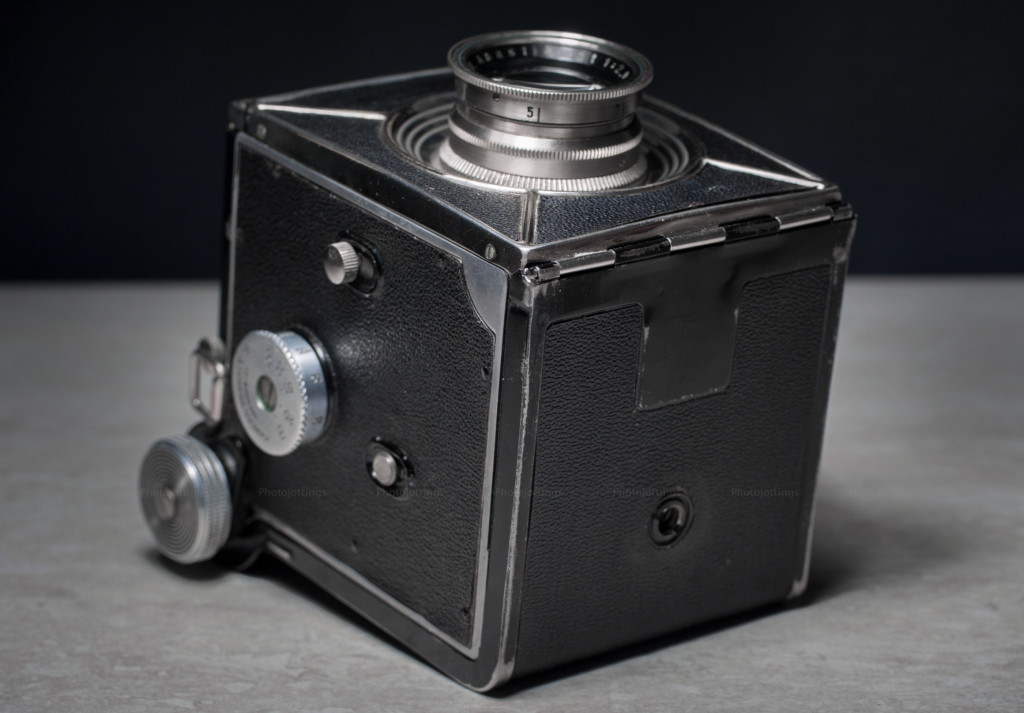 The 1/4-20 tripod socket is centered on the lens, but it’s located towards the back of the camera. 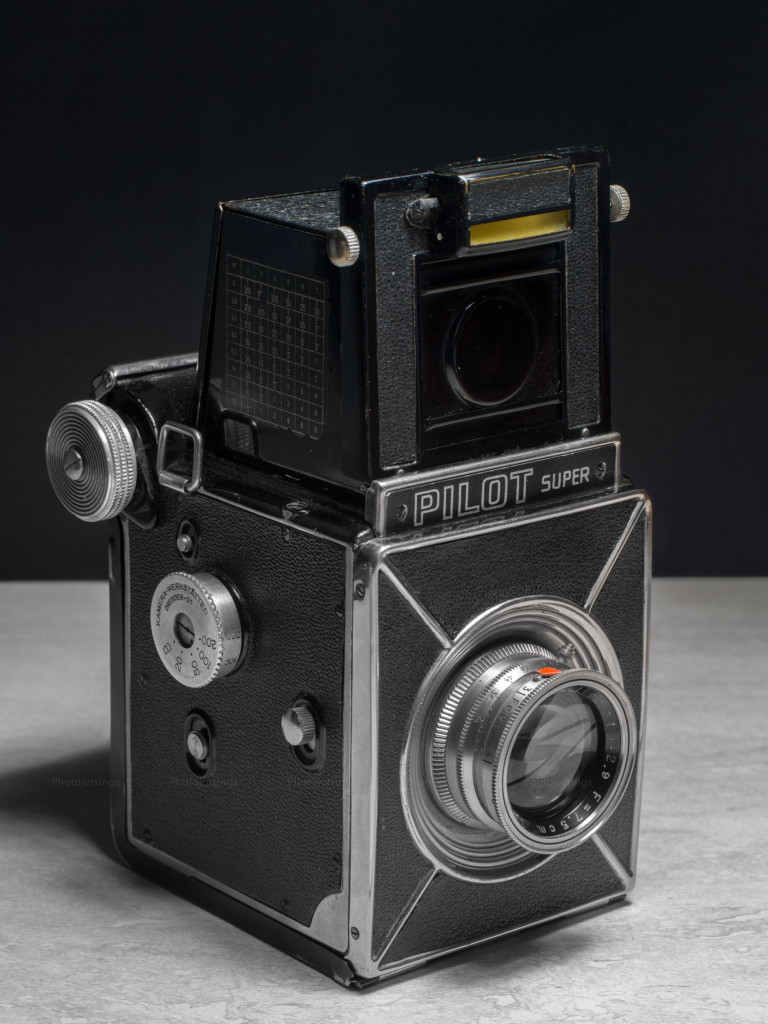 Here the hood is raised and the camera is ready to shoot.  The shot shows the knobs and switches needed for taking pictures on the right side of the camera.  The large round knob in the rear is for winding the film.  The speed setting and shutter cocking knob is below that.  The little switch between the two is for overriding the double exposure prevention system.  The round chrome shutter button is at the middle front.  The little switch below the speed dial is for time exposures; push up for long exposures. 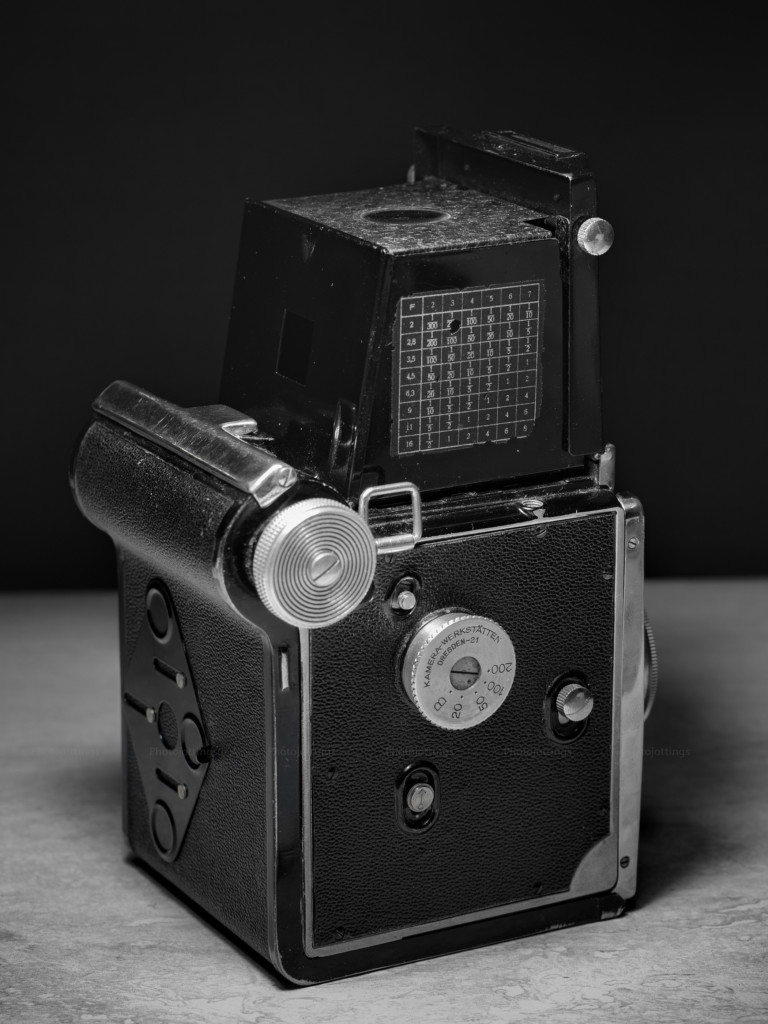 A good view of the shutter speed and cocking knob.  You set the speed to the dot in the center, not the slot; so here it is set at 1/50s.  At the rear of the camera you can see the three red windows, (covered here with the black shield), for properly advancing the film.  The middle window is for 6×6 exposures, and the top and bottom are for 6×4.5.  Back then there were no markings on the backing paper for 6×4.5, so you had to use the 6×9 markings and align the number at the bottom first, take your shot, then align the same number at the top for correct spacing for the next shot.

The extinction meter table is located on the right side viewing hood flap on this copy, (but not all copies).  Here you determine the correct exposure from your reading, see picture below.

The cable release socket sits on top of the body at the edge, and to the right of the strap lug, and under the extinction meter table. 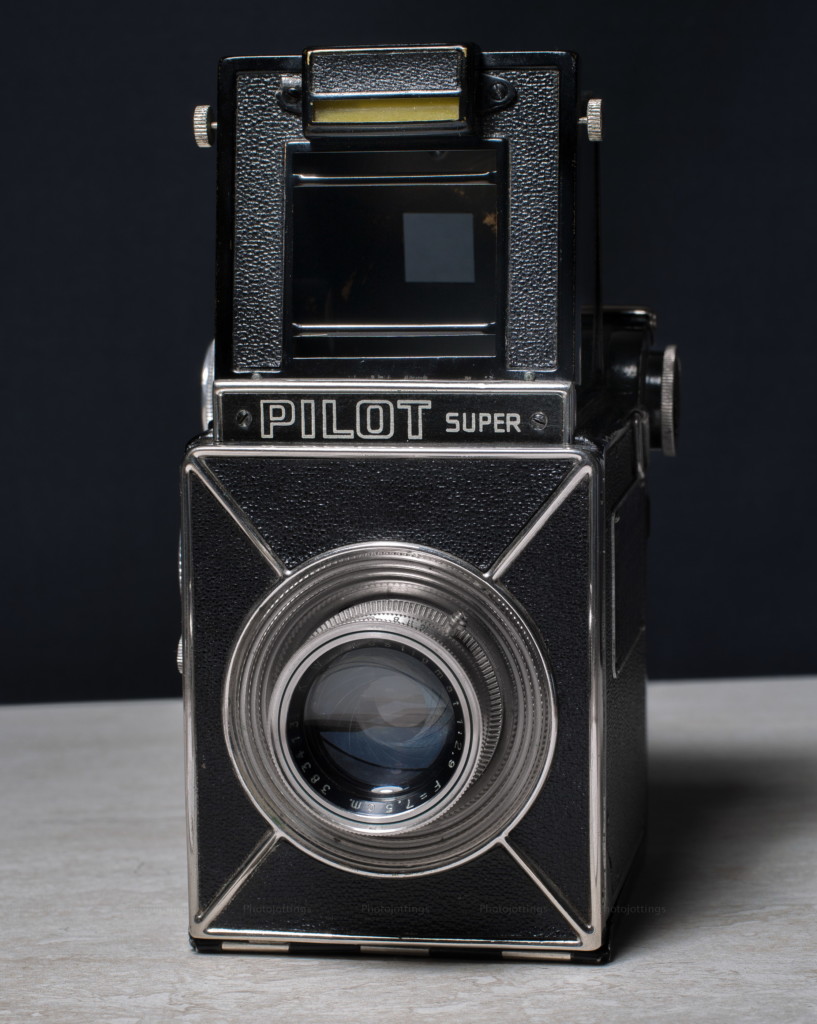 To use the ‘eye level’ direct viewfinder, you flip up part of the top of the hood which tucks under the focus magnifier, and you have a choice of two capture areas; the entire square for 6×6, or between the two bars for 6×4.5. 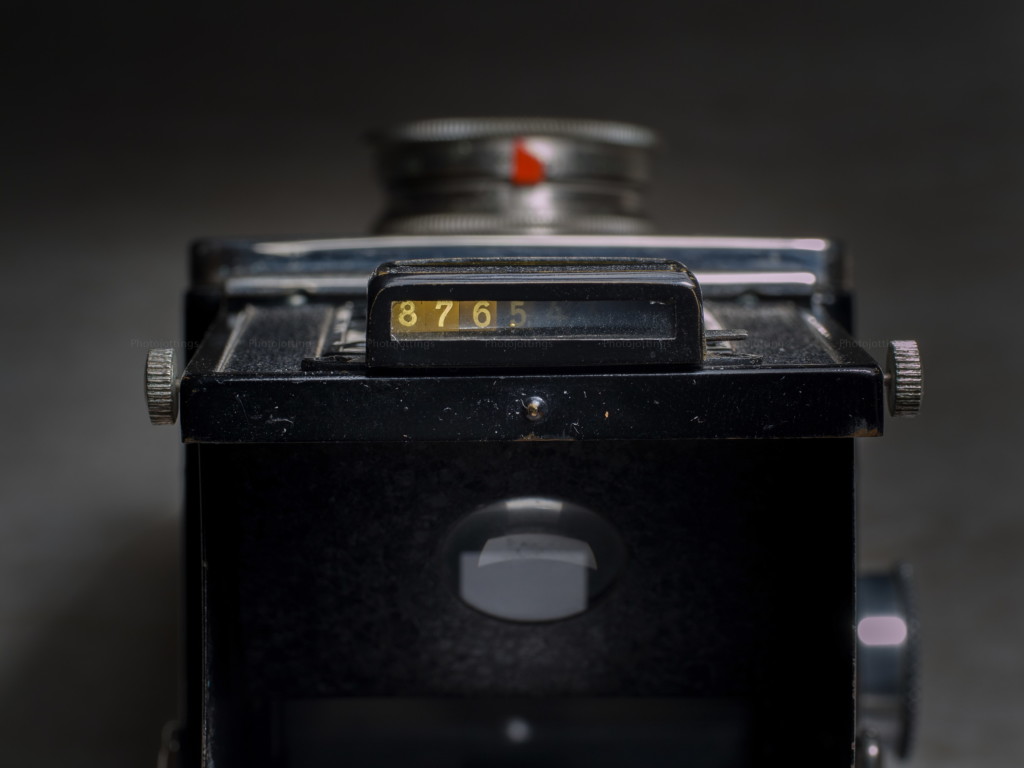 A view of the extinction meter.  You determine the correct value by the number that is just visible.  Here is would be about 4, or maybe 5.  Film sensitivity ratings were probably near ASA 50 in the late 1930s.  This extinction meter has a darkening filter that flips up via flat lever on the right side; it’s the only one I’ve seen like this, all others have a little lever with thumb-wheel on the left side.

With the back open you can see the film chamber with guide rollers, metal pressure plate, supply spool compartment in the middle, (with the previous owners name penciled in between the rollers), and take-up spool holder on the right side. 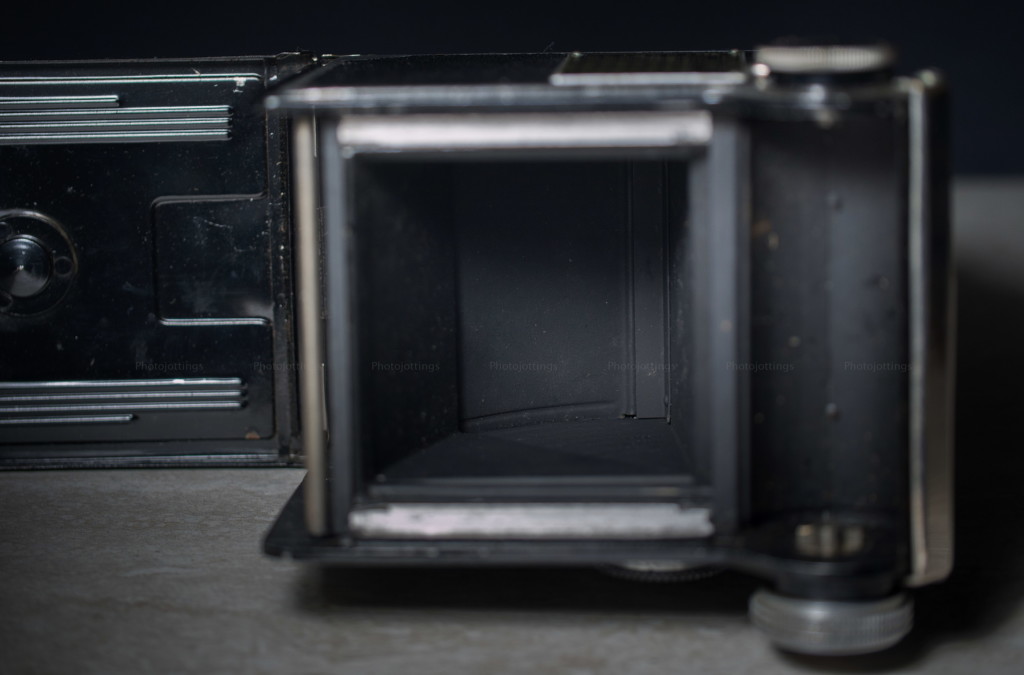 Inside the film chamber; nothing really to see here.  Access to the other side of the mirror is by unscrewing the lens, or using the time exposure to keep the shutter open. 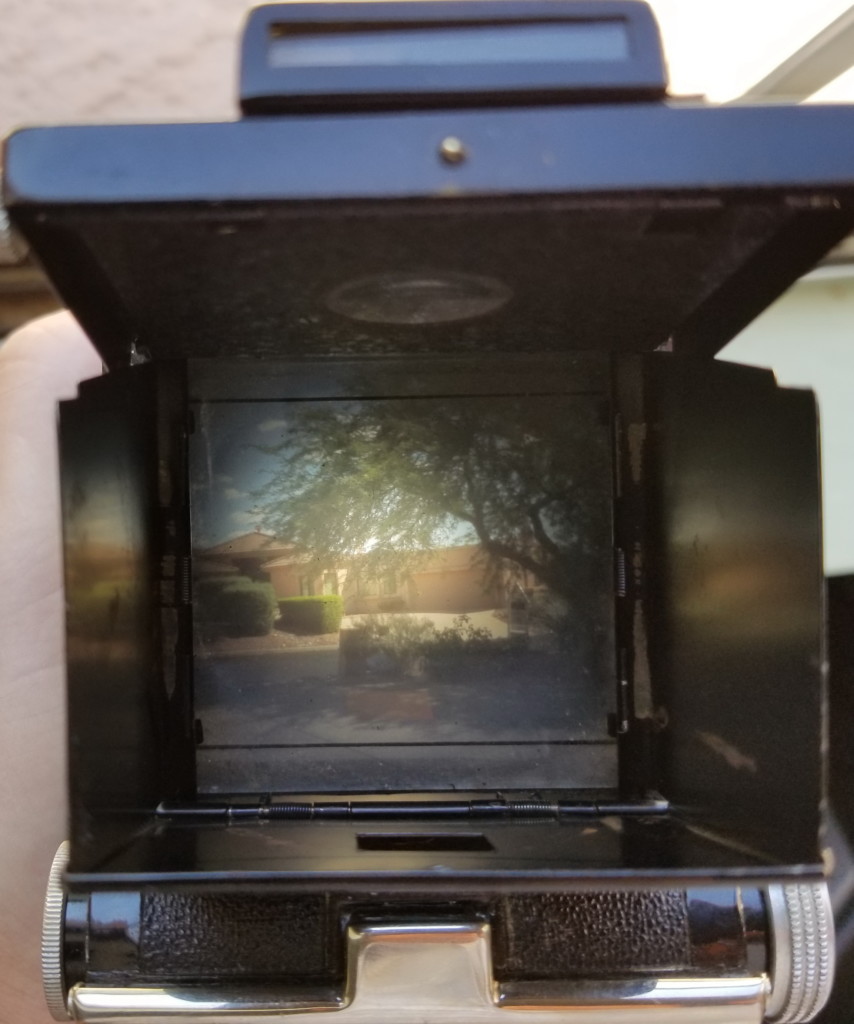 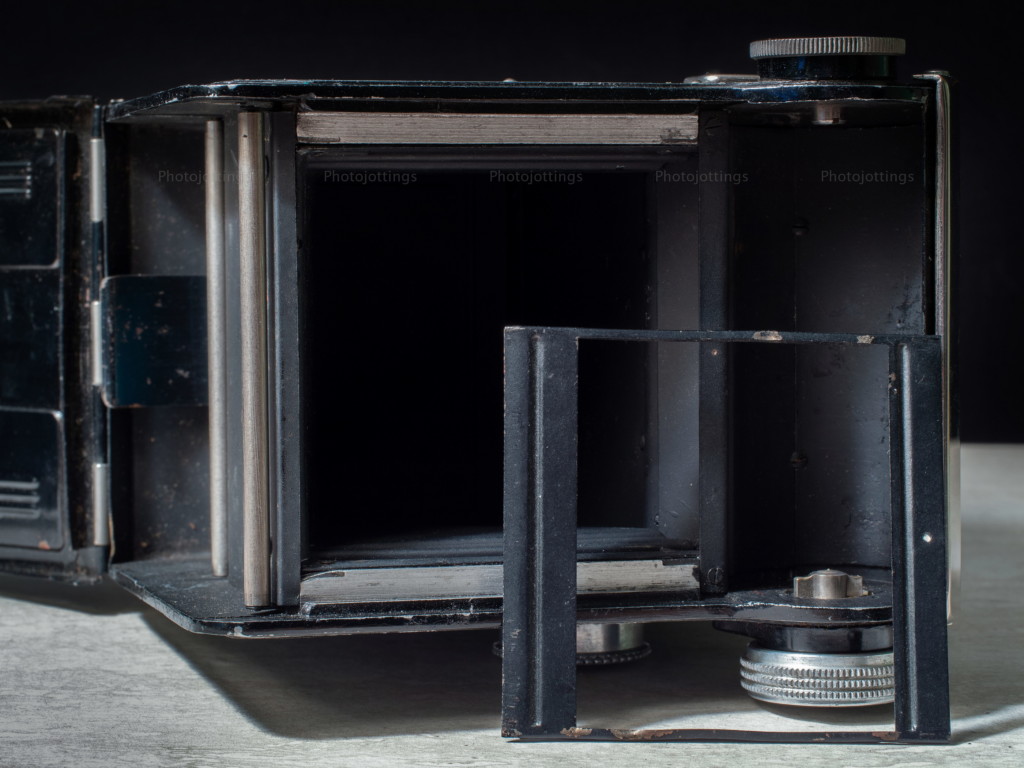 The rare 6×4.5cm mask is made of very thin metal, so be careful when installing. 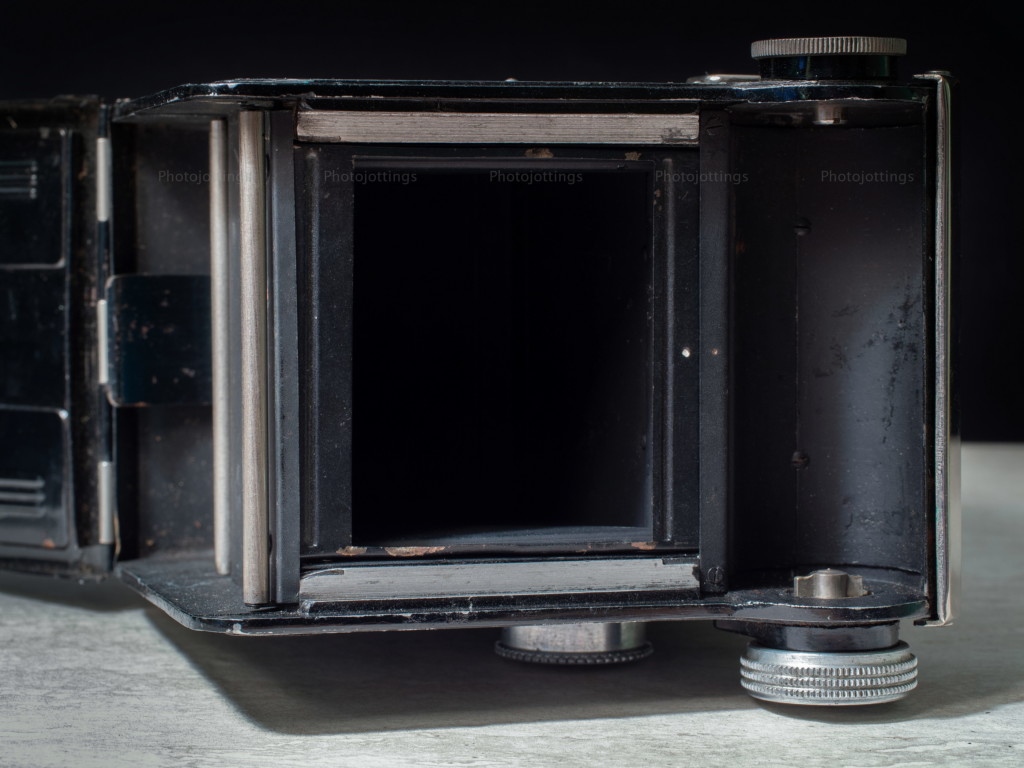 When installing the mast, you slip the end with the white dot under the top of the film guide (with corresponding white dot), and then pull it back slightly and insert the bottom so both ends are secure. 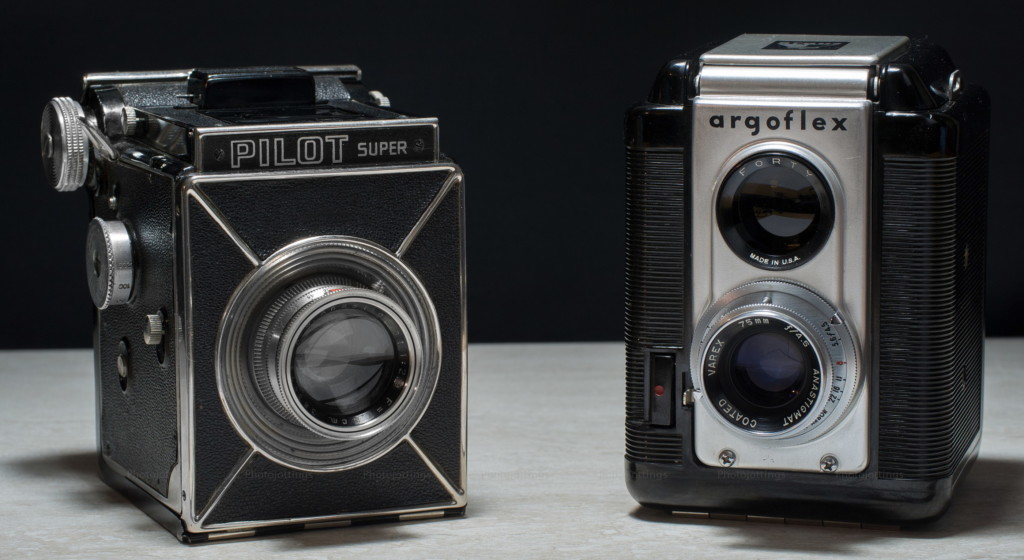 The Pilot Super is a bit smaller than the already diminutive Argoflex Forty.  Just between you and me, I’d rather have the Argoflex for taking serious pictures. 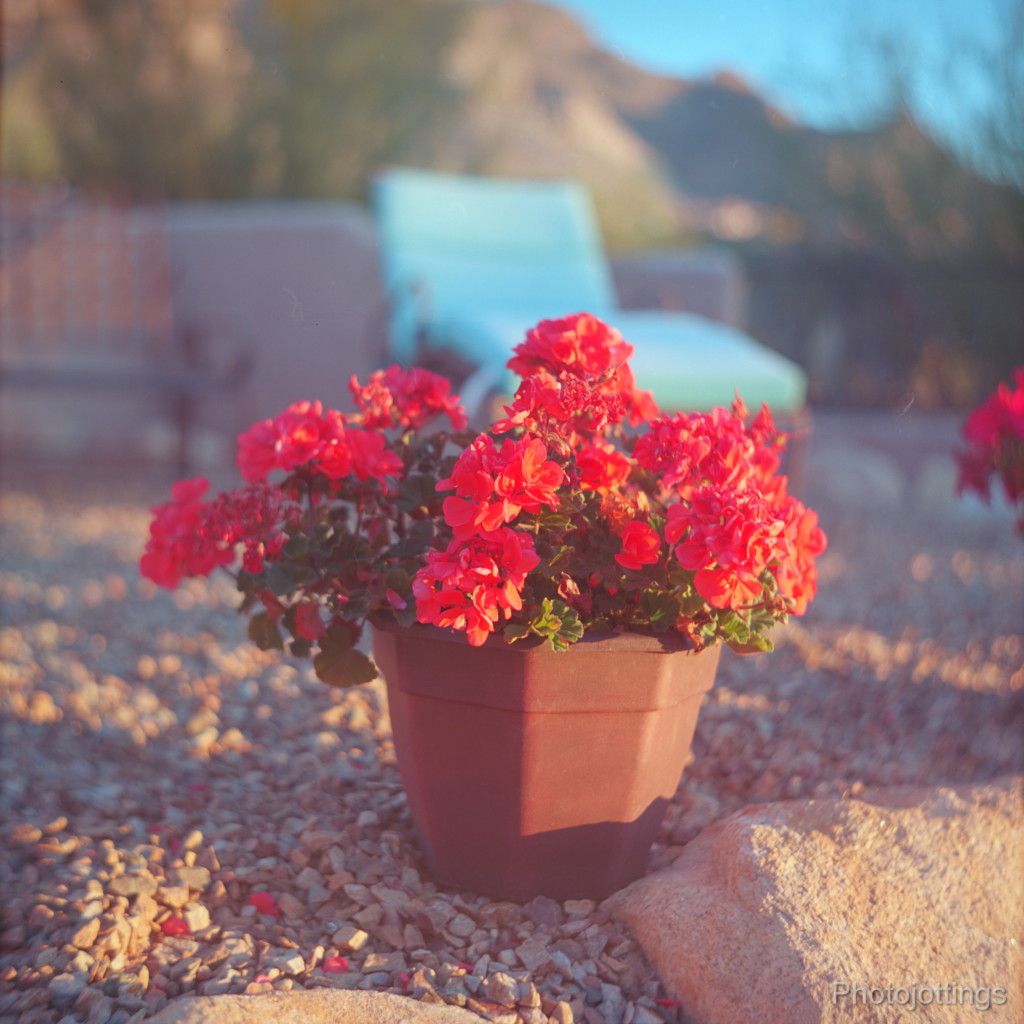 F/2.9.  The bokeh, or background highlight blur is a little harsh wide open, which is normal for most lenses; even modern ones.  I’m guessing it gets a little smoother as you stop down, but I ran out of film before I could check that out.

Here are some test images scanned on a Nikon Super Coolscan 9000 ED.  All are 4000×4000 pixels wide; there is no additional resolution from scanning at a higher sample rate.  Kodak Ektar 100 used for all shots.  Click for larger images. 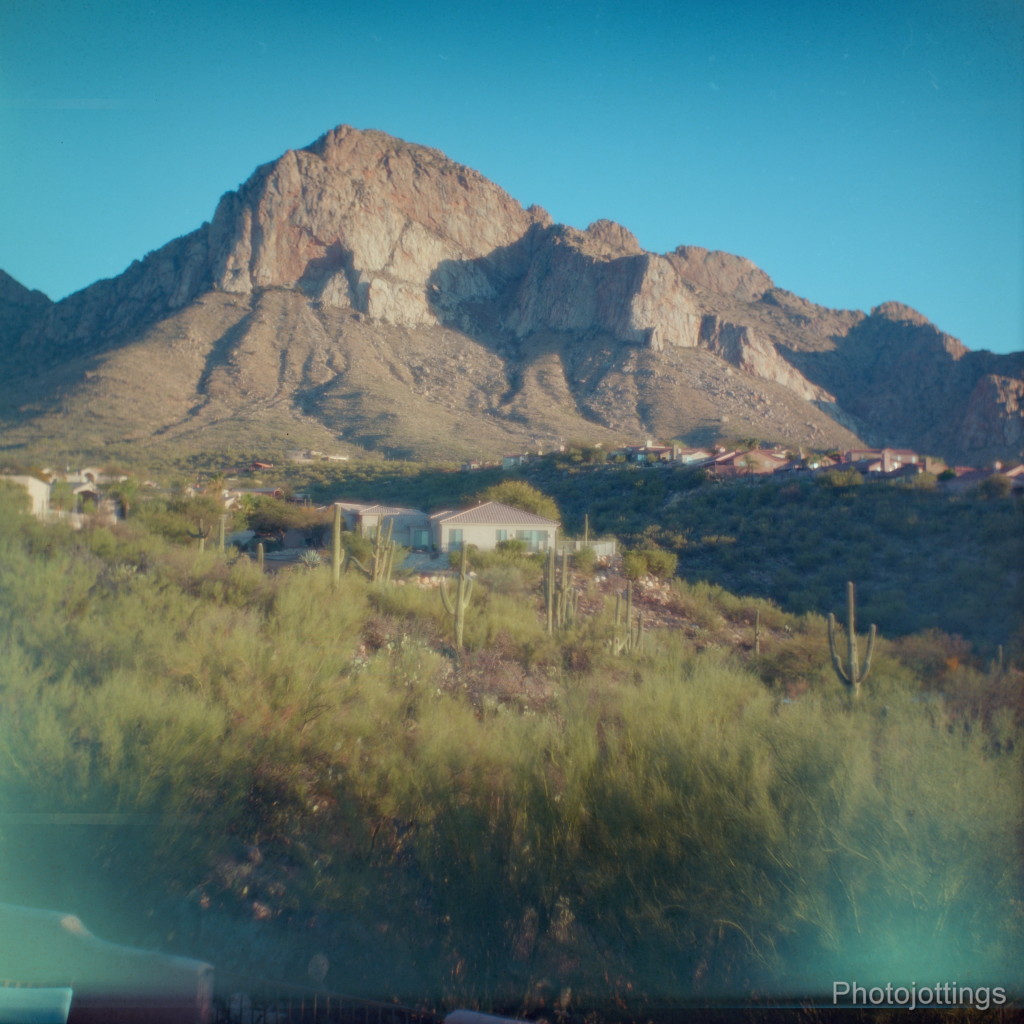 F/2.9.  A ‘dreamy’ look from a lack of contrast.  Usable for small prints, although for some reason I actually like this look.  Light leak blobs at the bottom corners.  There is a surprising amount of detail present in the central area. 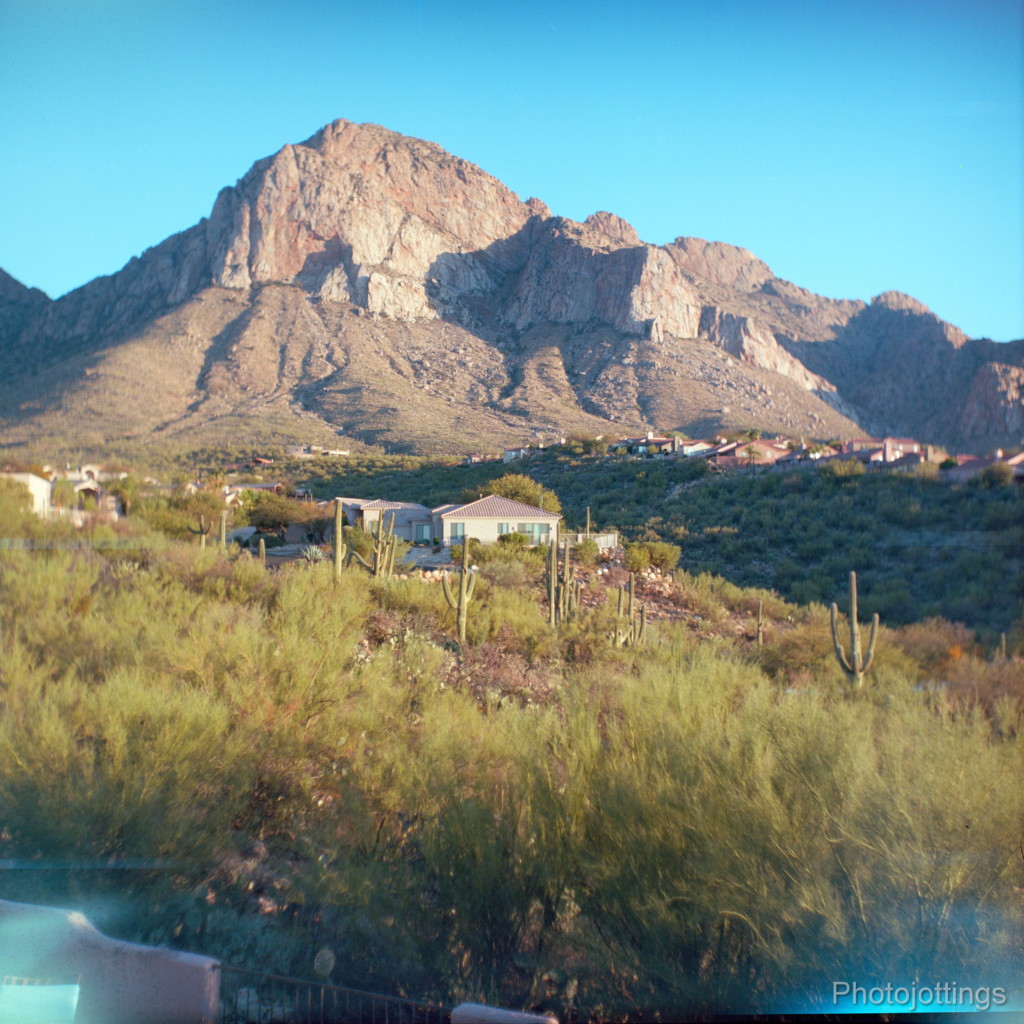 F/4.  A nice bump in contrast in the central area, but the sides are about the same. 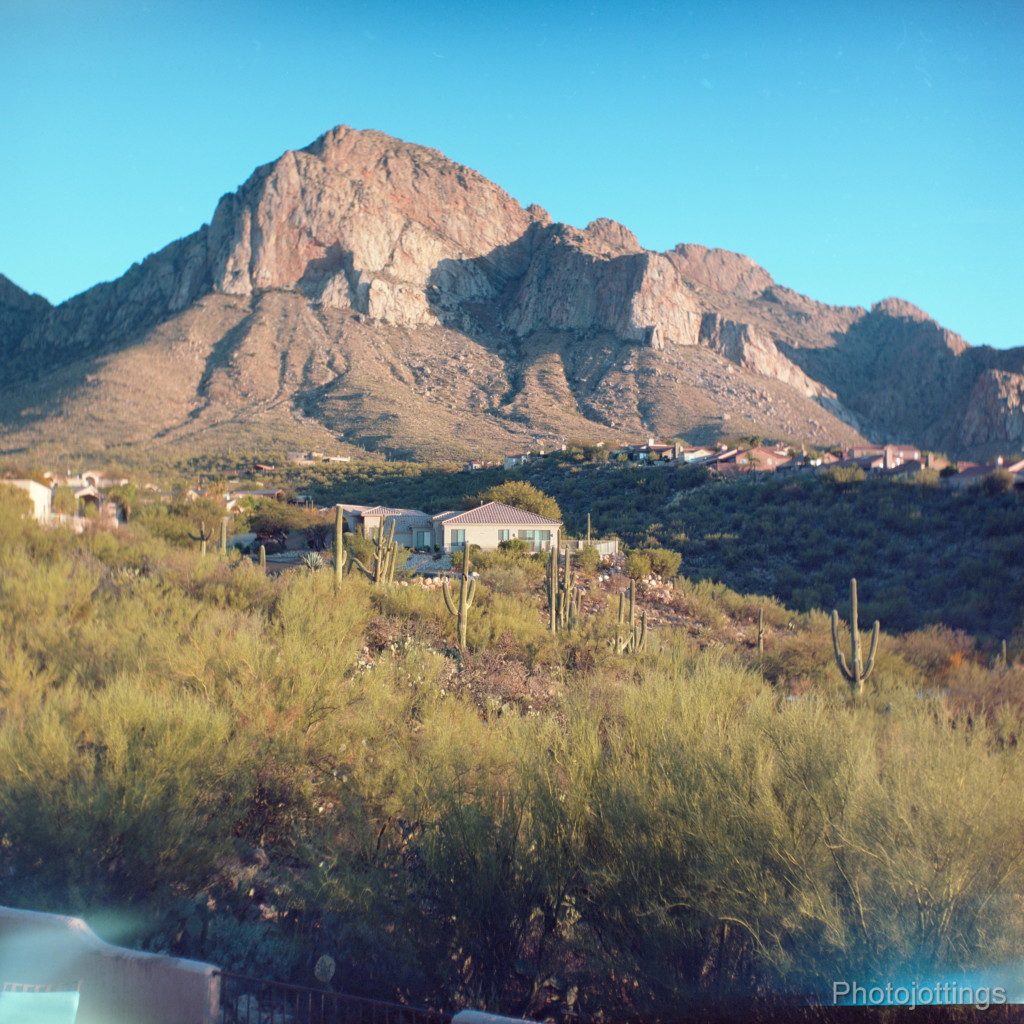 F/5.6.  Sharpness and contrast look better over the entire frame. 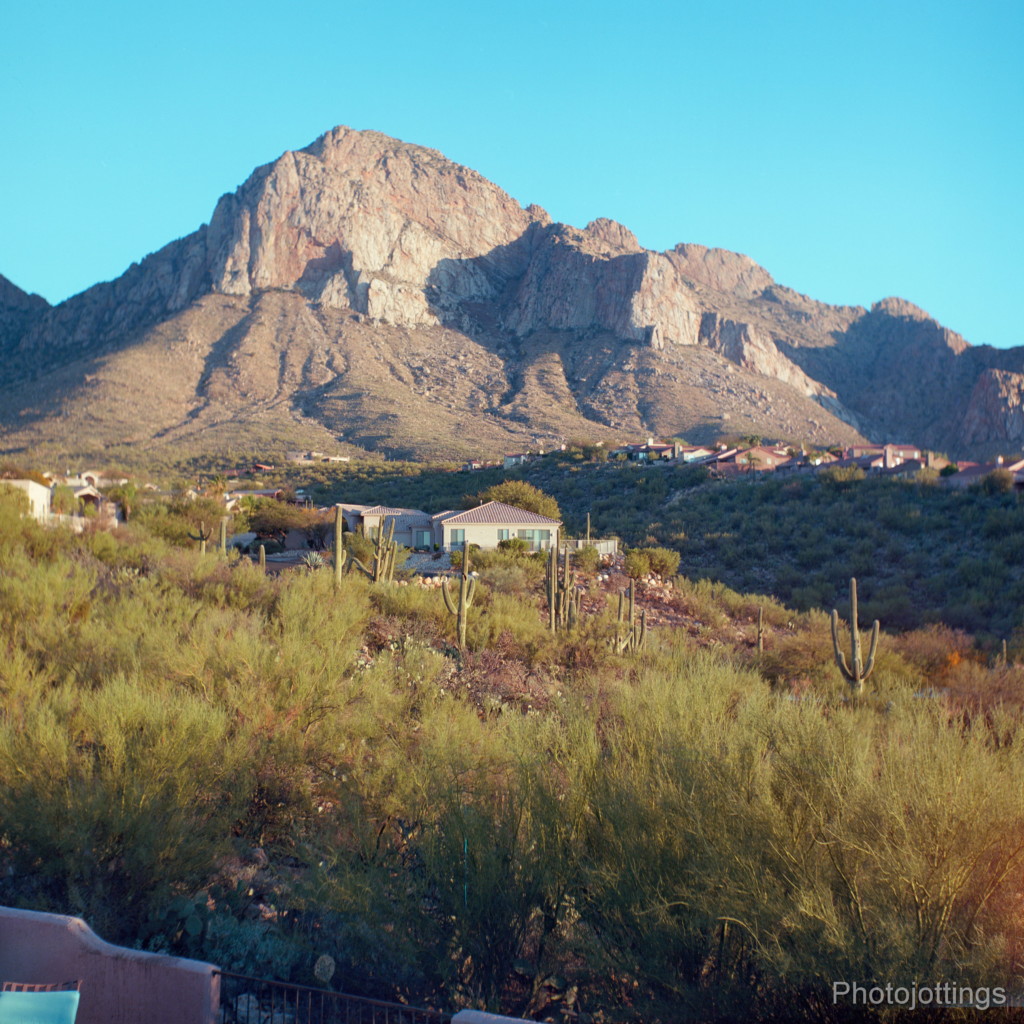 F/8.  The sides sharpen up nicely at this aperture, and the light leaks disappear. 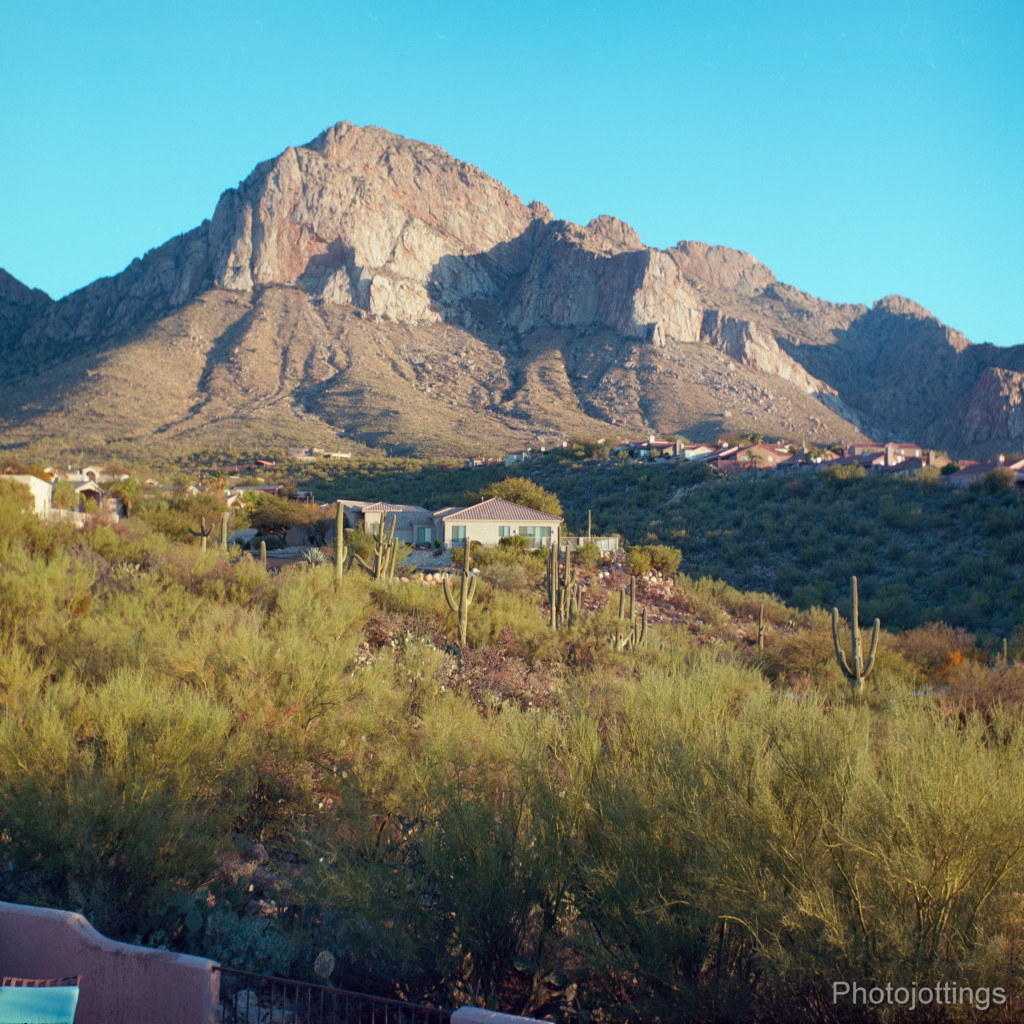 F/11.  This shot shows a little camera movement, so it’s not very useful. 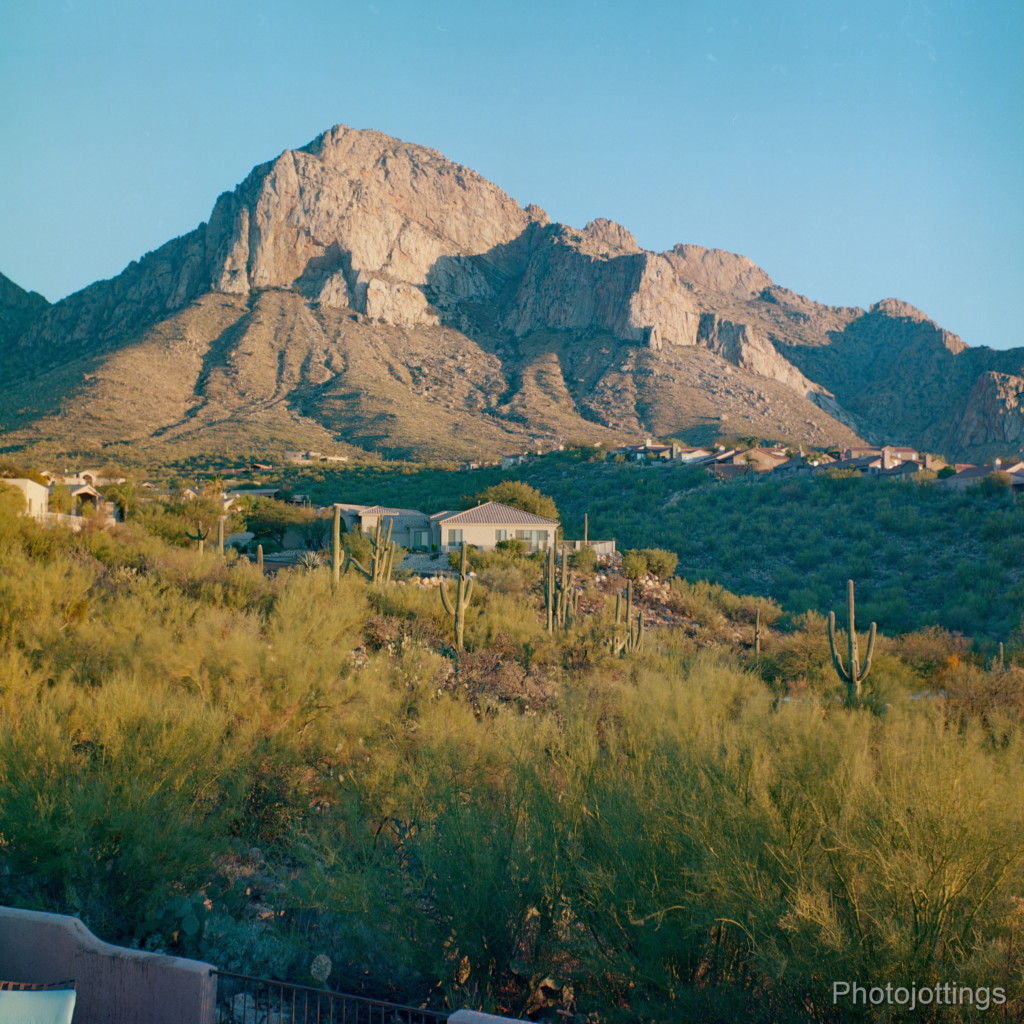 F/16; as sharp as it gets; and about the same as F/16 without the camera shake.  The sides remain a little soft at F/16; an additional stop added for F/22 would probably help out.

I found the Pilot Super to be an interesting and unique camera; apparently, it was so cool that Kamera Werkstätten’s late 1930s design was partially ripped off by the builders of the ‘Great Wall DF-2′ forty years later.  However, uniqueness and the cool factor only goes so far.

There are a few ‘gimmicks’ on the camera that could’ve been left off; the ‘eye level’ direct finder is not very helpful in composing your image, and of course you can’t focus while using it; isn’t that the whole point of an SLR?  The extinction meter has dubious value in my opinion, and the flip-up filter makes it so dark you can’t see the numbers except in the brightest light.  I’d use the ‘sunny 16’ rule and forget the extinction meter.  One more issue, although not a gimmick; the large mirror tends to ‘slam’ closed, which causes movement to show in the images; a traditional leaf shutter would solve that issue.

Contrast is very poor with the lens wide open, but Ironically, the sharpness of the centers at F/2.9 is quite impressive.  The viewfinder glass is dim unless you have bright light and focus and compose at F/2.9, then stop down to a good usable aperture and take the shot.  I had trouble with light leaks at wider apertures; I’m guessing it has something to do with the shutter mechanism based on the shape and sliced sections of the leaks.

I may run another roll of film through this camera and do some more testing at some point in the future, but for now I’ve had enough.  The KW F/2.9 lens is not really very good; it reminds me of a simple and cheap achromat type like this one.  If you keep the aperture stopped down all the way, and use a high shutter speed, you can get some pretty good shots.  In all honesty, I think the Pilot Super is better left on the shelf in the camera museum.