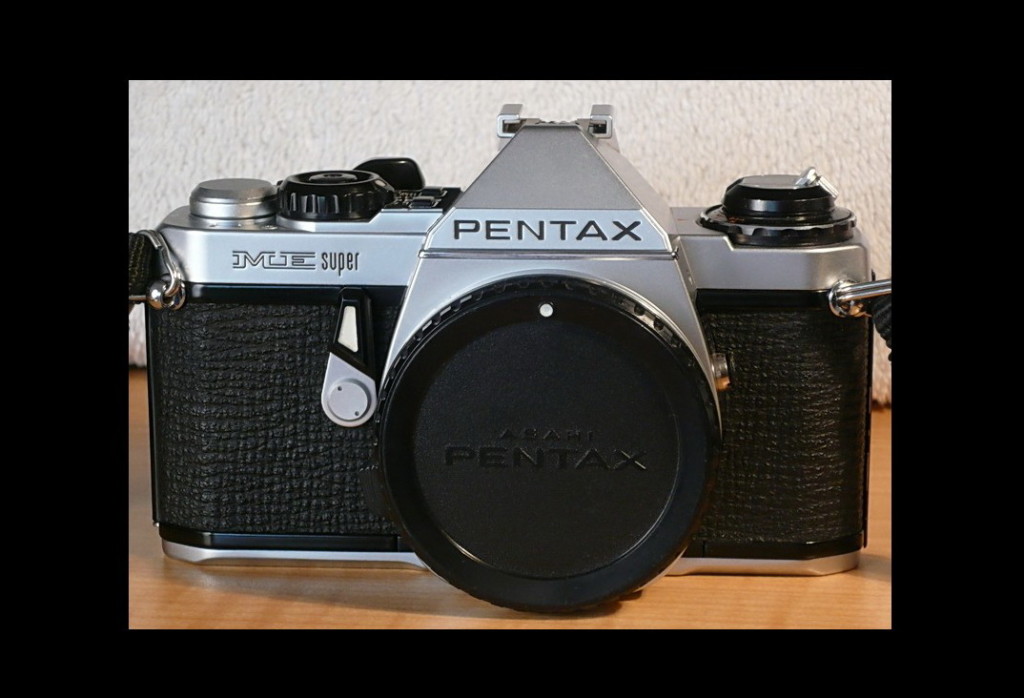 Are you looking for a small interchangeable lens 35mm camera that will work without batteries? One that you can actually stick in your pocket with a small lens? Look no further than the excellent Pentax ME Super camera.

This popular model from Pentax was made from the very late 1970s to the mid 1980s, and was probably discontinued due to the auto-focus craze starting in the mid to late 1980s.  Build quality is excellent, with a precise fit and finish, and lightweight as well.  Paired with the very small Pentax-M SMC 40mm F/2.8 lens it was actually pocketable, and about the same size as a Sony A6500 with kit 16-50 lens.

Features. It has an ‘auto’ mode, but you have to set the aperture on the lens, and the camera adjusts the shutter speed, which shows up in the viewfinder. You can use ‘bulb’ or ‘M’ and ‘125x’ for all manual use. With no batteries or dead batteries you can keep on shooting, however, the camera defaults to a shutter speed of 1/125 so you’ll need to compensate via aperture for correctly exposed pictures. You can also use ‘bulb’ mode without batteries, but obviously you’ll need a support for the camera. Big and bright ground glass 0.95x viewfinder makes it easy to compose and focus.

Shutter speeds include 4 sec to 1/2000s, you can see them in the viewfinder.  ASA 12-1600. Self timer 4-10 seconds.  Exposure compensation in full stops -2-+2.  Flash sync at 1/125s.  Wiggle window below advance lever to show when film is advancing as you wind.  Loads film in a normal manor, but don’t set in ‘auto’ mode in low light as it will set a low shutter speed and you’ll have to wait for a while between cocking. Set to 125x and load normally.  There is a shutter cock indicator beside the tip of the wind lever, if its orange you’re ready to shoot, if black, you need to cock it.  Frame counter has orange numbers at common film rolls like 12, 20, 24 and 36, although 12 and 20 exposure rolls are no longer available as of this review.

Lens: For this review I used the Five element Pentax-M SMC 40mm F/2.8.

On the back of the camera is a film reminder slot.  Hint; if you need this you aren’t using the camera enough!

You can get a winder and data back, but why?

Battery; takes two A76, LR44 etc, cheap batteries, get them at the grocery store too. They last a long time and only cost less than a dollar for two if ordered online.  I never had to replace mine, and I used the camera for over a year.

Check out the pictures below to see what I’m talking about above. Note; these product shots are small, I started this review in 2010, and 800 pixel wide images were pretty common back then.

Here are some rather mundane test pictures from negatives scanned using the Nikon Coolscan 9000.  Disregard the dirt on some of the images, I scanned these a long time ago, and apparently back then I wasn’t too picky about cleaning the negatives as I am now.

This first image is a general landscape scene, probably around F/8-11.  The golden Bougainvillea was shot at close focus, F/2.8.  The forest tree scene probably at F/8-11, I turned it on the side to make the slide show work better. Another general landscape scene around F/8-11.  A flare control shot here, originally taken vertically.  The last picture I’m testing distortion; I see a very flat signature, almost nothing.

Fuji Superia 200 color film was used for these images, not widely available now; its not my favorite film, I actually don’t like it.  This film is way better for about the same price with a five box, plus a stop faster. I do initial testing on all my 35mm film cameras with Kodak 200; it’s very good for the price.

Click yellow tabs above to download the full size images. All are 3000 pixels wide on the long end, which is plenty to show the full resolution, nothing extra is gained by scanning at a higher rate.  The 40mm lens is pretty good overall, but a slightly sharper lens and finer grained film would show a noticeable gain in resolution. I picked these shots from a small sample I took in 2009 with the 40mm lens as I was testing it out.

As stated above, the camera is only dead batteries (or no batteries) manual at ‘125x’ or bulb mode, so it isn’t a true manual camera for the ‘all mechanical’ crowd, but it does have full manual mode with the cheap button batteries installed.  It also works very well in ‘auto’ mode, however, I’d add about +1 exposure compensation for print film, some of the samples above are slightly under-exposed.

All things considered, the Pentax ME Super turned in a great review. It’s a fun camera that’s easy to carry around, with good ergonomics and handling especially with a small lens. I really like small cameras that will function with no battery power, so this one worked out really well. A great camera for those wishing to travel light, and want control over their exposures.

Check out the huge assortment of lenses available for this camera.

Like an idiot, I sold this pristine sample off a few years ago, now I wish I had it back; oh well.