This is a review of the big and heavy Manfrotto 058b tripod, and light but handy Manfrotto 222 joystick head.

The Manfrotto 058B tripod is marketed at medium and large format photographers working in the studio.  In my opinion, the most important features are its extended full-height sturdiness, and quick set-up, neither of which seems like it would be critical for studio use.  What makes the 058B tripod unique is its ability to be set and leveled simply by pushing a couple of thumb tabs, which releases the upper extension legs and allows them to drop down, from there you do your final positioning using the built in level, and release the tabs to re-lock the legs; this is super handy for outdoor use in uneven terrain (like here in AZ) when you’re setting up for an important time-sensitive shot.  It also has lower extension legs that allow a max height of almost 8′ (2.4m) when used with the 222 head.  Note; The head I have on this tripod is not what most people would choose, however, my decision was based on shot-to-shot set up time, such as multi-angled twilight shots and Real Estate work.   More on the tripod farther down the page.  For tripod specifications, go here.

The 222 joystick head is fully adjustable (180° sphere) by squeezing the large gray finger lever, which releases the tension, then rotating or tilting it to the desired position, and releasing the lever.  It includes a spirit level, quick release with safety lever, and tensioner knob to control how much effort is required to move it.  This type of head compliments the tripod above as it is also very quick to use.  For head specs, go here.

Now for the full set-up.

This is what the fully retracted combination looks like.  It’s about 45″ (1150mm) tall, and slightly over 15lbs (6.8kg) in weight.  Both items have an excellent build quality, and are made in Italy from aluminum, with a few parts being plastic, like the red tabs and knobs etc.  The included strap has a loop at the end to cinch the legs so you can carry it like a rifle.  Rubber feet with retractable spikes come standard. 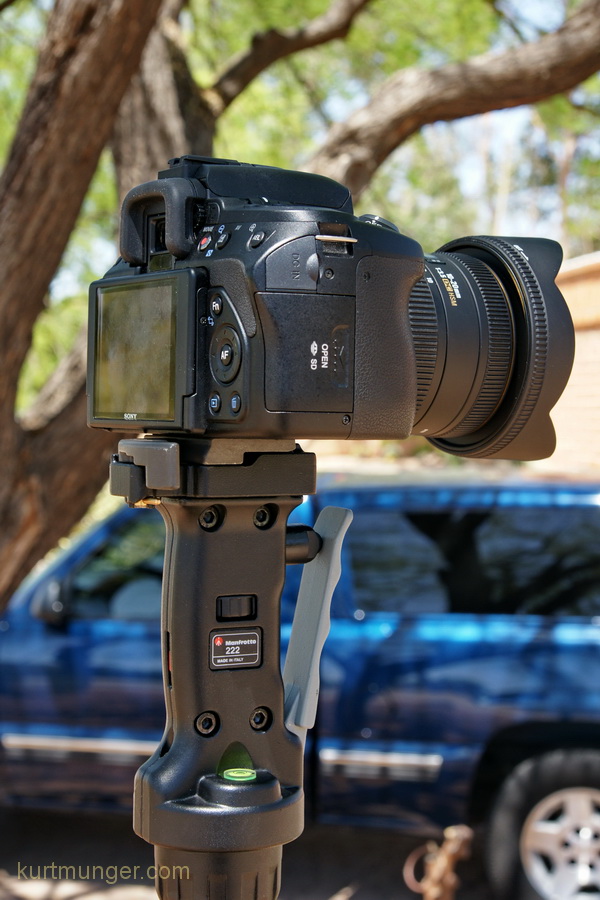 Here’s the solid and smooth handling 222 head with a camera attached by way of the included quick release RC2 type, (200PL-14) plate.
The quick release plate is interchangeable with many other Manfrotto heads and (all in one) tripods, this was one of the factors in my purchasing decision as I have a much smaller Manfrotto tripod for a back-up that uses the same type.  In other words; if all your tripod heads use the same type of quick release plate, you can mount a plate on each of your cameras permanently, and not have to worry about showing up for a photo shoot only to find out you brought the wrong one, and don’t have a way to mount your camera on the tripod!
Also visible is the tensioner knob in the middle of the handle, you can tighten it up or keep it very loose, but the effects only come into play when the finger lever is squeezed and you are positioning the camera.   The bubble level is the green dot at the base. 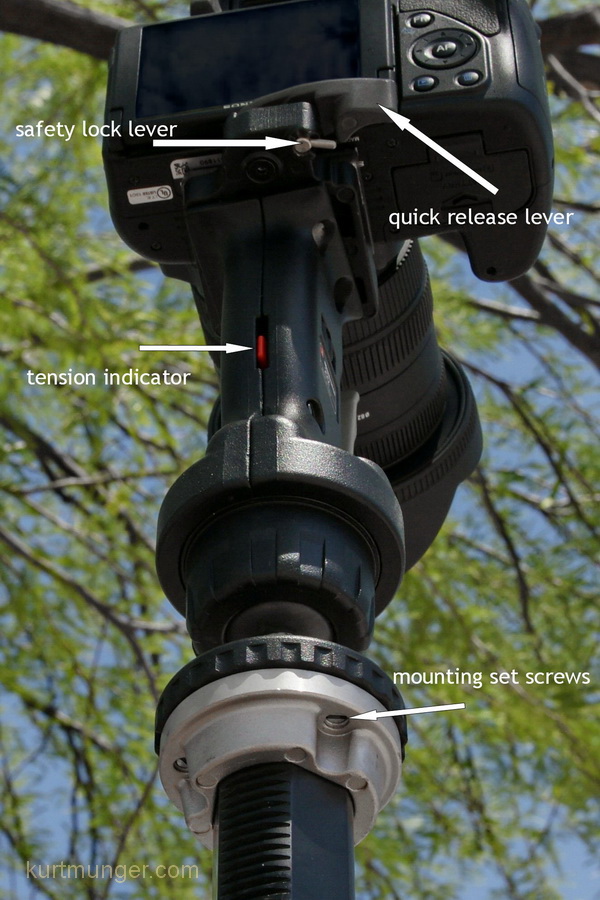 There is a large (quick release) lever that snaps closed when you mount a camera with plate into the head.  The small lever below the main lever is a safety devise, and it helps to keep you from releasing the main lever by accident and allowing the camera and lens to fall to the ground; no joke, it happened to me!  Thankfully I was able to put my foot out and saved it from hitting the floor.  Simply push the small lever into the position you see here, and you won’t have an accident.

The red plastic tab in the slot is a tensioner indicator, when the red tab is down, the tension is high, with no tension, it’s all the way up.

The head is secured with three slot-type set screws, visible under the bare aluminum base. 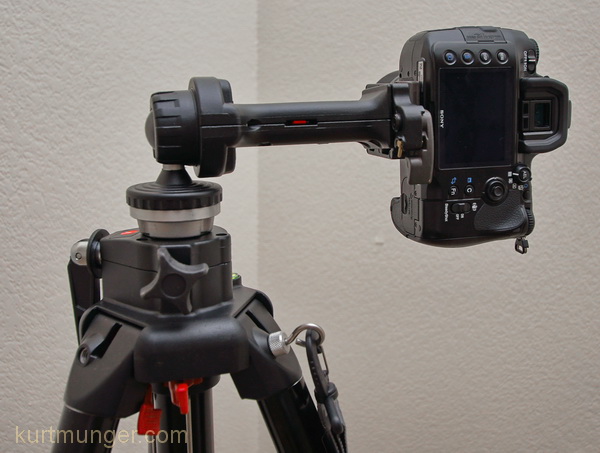 You can tilt the head ±90° all the way around, (180° sphere), if you need a slightly different angle, just push one (or more) of the leg tabs in the direction you need to get the desired position. 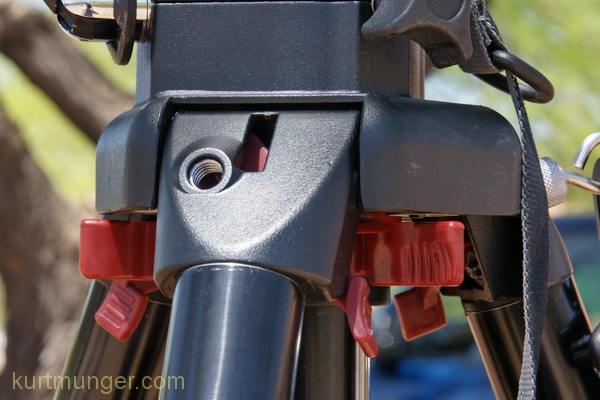 The upper red leg tabs are for adjusting all three legs simultaneously.  There are three of these tabs around the tripod, but you only need to push two tabs at the same time to release the lower legs.  If you wish to release only one leg at a time, you push the corresponding lower red tab.  The threaded hole on each leg is for mounting the strap hook, seen on far right of image. 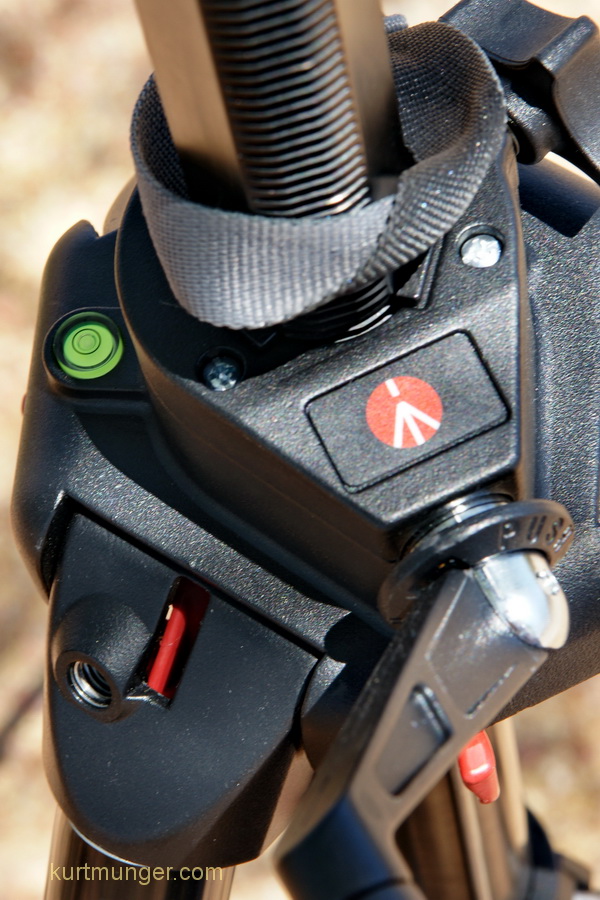 In this image you can see the strap is looped over the center shaft, I do that just to keep it from swinging around and getting in the way.  When the geared center shaft is cranked up, it won’t come down because it has a non roll-back feature, but can be locked with a knob (upper right of photo) to provide more rigidity.  The crank handle (lower right) can be reversed and put out of the way so it won’t break off during rough transport. 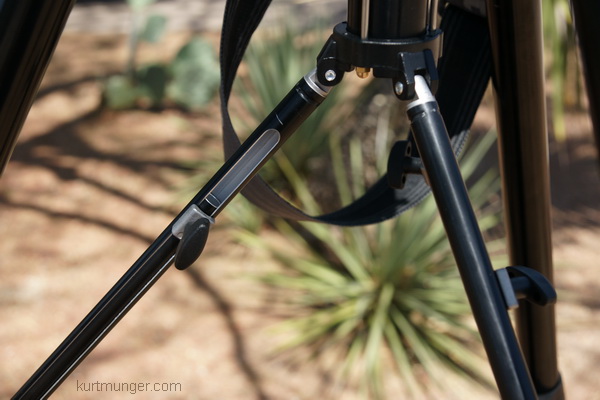 I almost forgot to mention the mid-level spreader system.  If you want to use the quick adjustment feature of the tripod, leave the spreaders loose.  If you want to lock everything down so you don’t accidentally bump a leg out of position, tighten the knobs on each spreader. 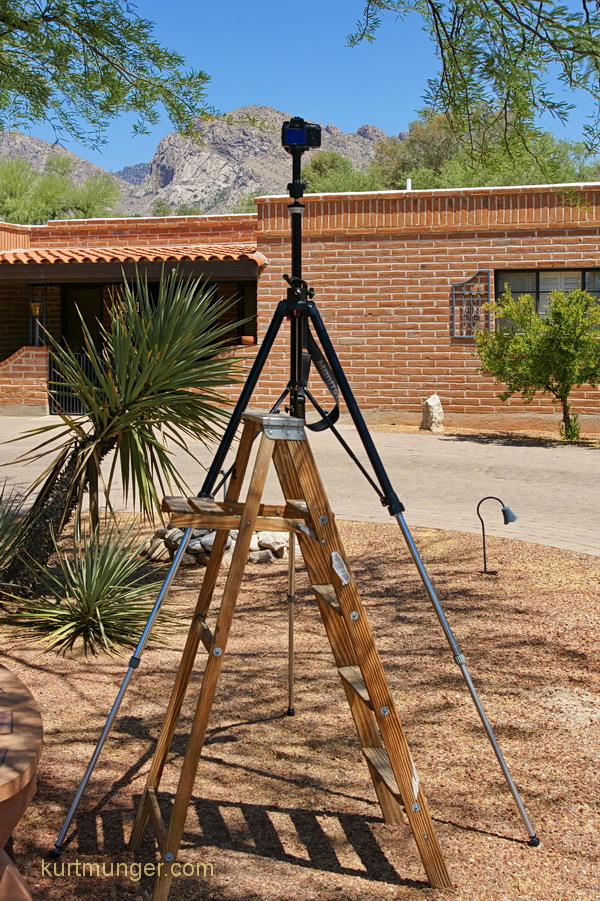 Here she is, all ready for a fake photo shoot.  I’ve got the tripod fully extended, including the lower extension legs, so it reaches almost 8′ (2.4m) with the 222 head.  The lower extension legs have to be released manually by twisting each upper extension leg lock and sliding the leg out, and then twisting the lock the opposite way to secure it in that position.  Placed next to the tripod is a 5′ (1.5m) step ladder so you can climb up to see the camera controls and viewfinder.

I set the tripod up like this for the purpose of showing you how high it will go, you don’t need to use a tripod with this camera in daylight, you could climb on the ladder and take the shot without the tripod if that was the perspective you were after.  However, if you shoot twilight shots that require longer exposure times, and need some height as you would need a ladder in daylight, this feature comes in very handy.  The mountains in the background are more noticeable from a higher vantage point (which makes the picture more dramatic), and the height attained by this tripod is another reason I chose it.  The tripod is very stable fully extended as seen here, even with the center shaft cranked all the way up, although I wouldn’t use a heavy telephoto lens zoomed all the way out.

A minor complaint about the tripod is that you have to determine the leg equidistance by eye, they don’t have a limiter or end point to go from, but that’s not a big deal for most people.

A major down side to this set up is the weight, it’s really heavy, but that’s about the only complaint you’ll hear in all the buyer reviews.  If you’re looking for a solid, well built tripod that’s quick and easy to set up, and offers a great height range, the Manfrotto 058b would be a good choice.  If you don’t like the looks or handling of the 222 head, there are many other more traditional heads available that may suit your needs, I picked the 222 for speed.

Two other heads that will work well and use the same QR plate are the; Manfrotto 804RC2 pan-tilt, and the Manfrotto 460MG which I may purchase and review in the near future.

That’s it for this review, if you’d like to support the site, check out the Manfrotto 058B tripod, or Manfrotto 222 Joystick head by using the links, thanks!