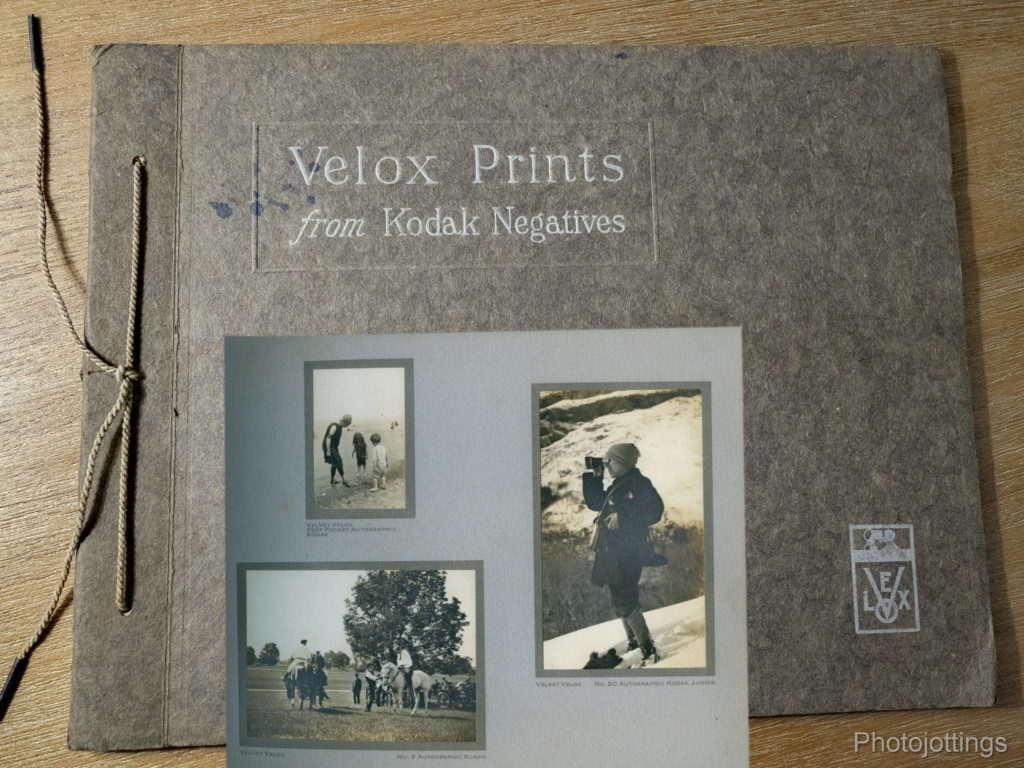 When you walked into your local camera shop in the late teens or early 1920s and wanted to get some ideas for printing your pictures, the dealer might show you this sample album from Kodak.  The Kodak Velox Print Album has seven pages, and includes samples of not only different types of Kodak’s own Velox paper, but the actual size of the negatives from some of Kodak’s cameras, like the Vest pocket, No. 1, 1a, 2c, 3a, and the ‘Panoram’ camera.

The printing papers in the sample album were marketed towards amateur photographers, and showed the size and quality one could get using a selection of Kodak’s less expensive cameras.  I’ve scanned the whole album for a page-by-page presentation.  Unfortunately, over the years, the prints have suffered some degradation, mostly visible in ‘silver mirroring’ which is described here.

The colors of the pages and prints in this post are pretty accurate compared to directly viewed images; so with that said, let’s step back in time for a moment, and see how our pictures might’ve looked nearly a hundred years ago! 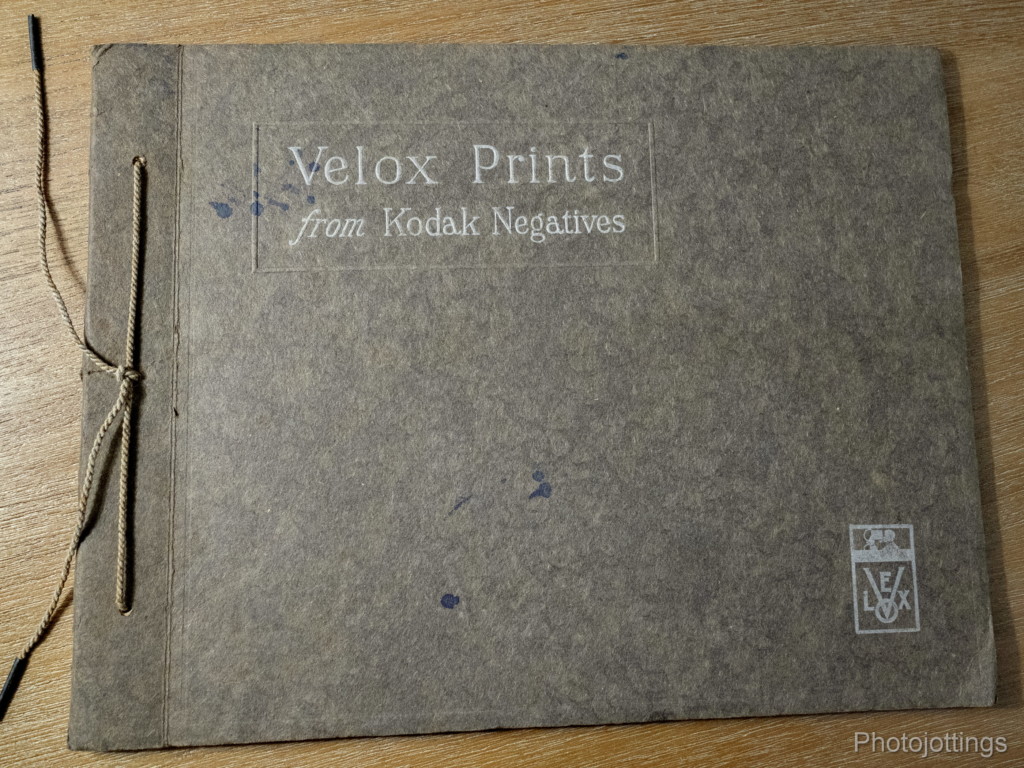 This is the front cover of the string-tied album containing seven heavy stock interior pages. 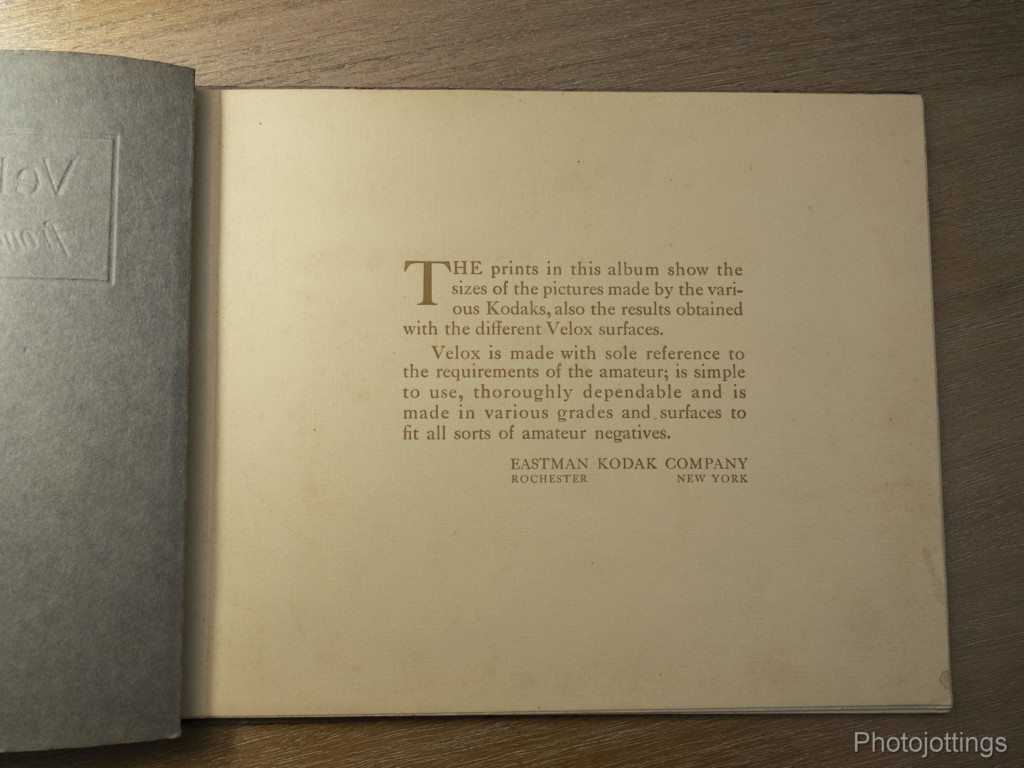 The first page briefly explains the contents of the album. 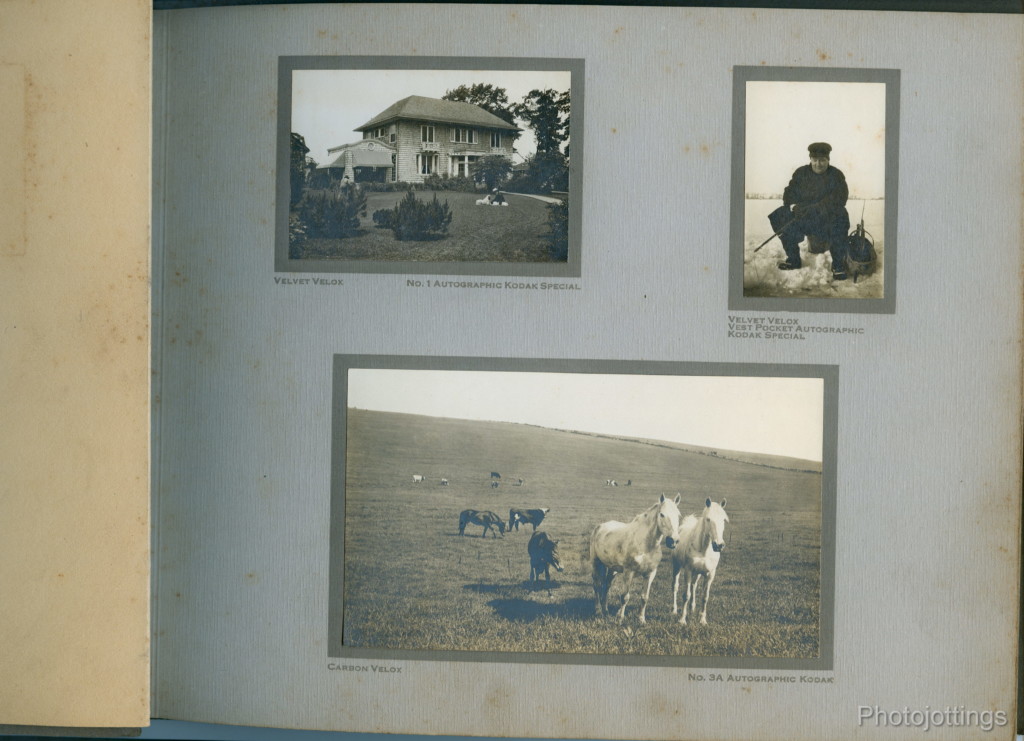 The second page; blue/gray in color, shows us actual printed pictures from Kodak cameras.  The No.1 autographic Kodak Special at top left is a good camera, even by today’s standards and was much more expensive than the ‘Junior’ models.  The No. 1 took ‘6×9’ or 2¼ x 3¼ inch negatives using 120 film.  The small picture on the right is from a ‘Vest Pocket’ camera using 127 film, and was about as small as you could get back then from a conventional camera.  The bottom image shows us the size of print from a No. 3A camera, which makes 3¼ x 5½ inch negatives, with a roll film designation of 122.  The type of paper used is indicated on the bottom left of each photograph. 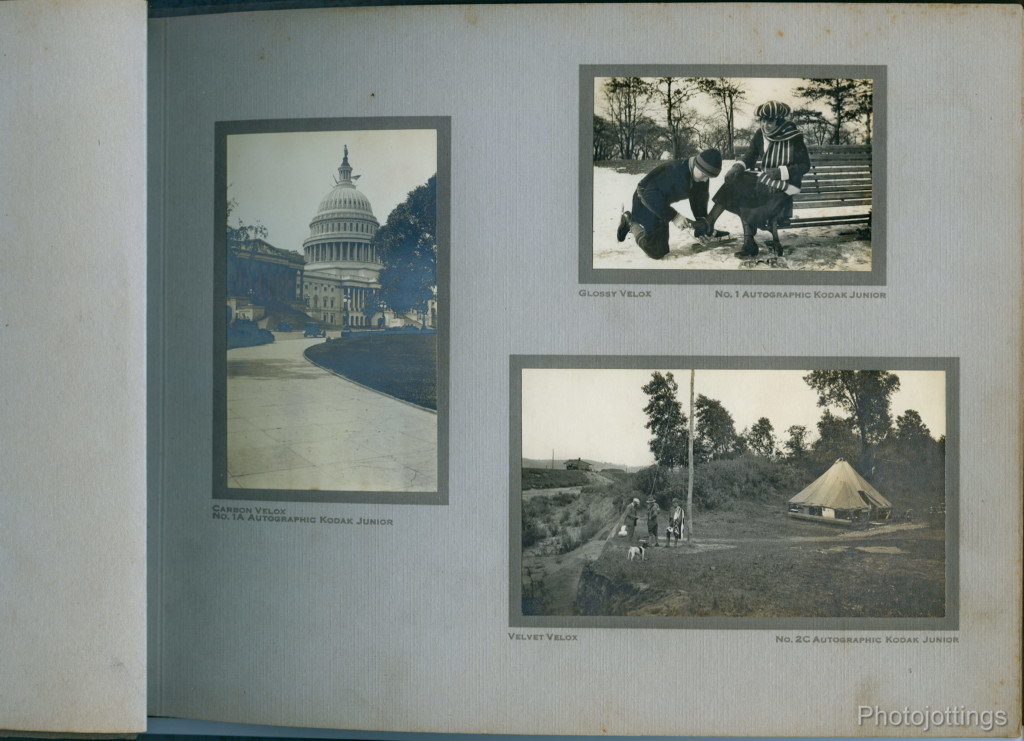 The Capitol building was taken with a Kodak No. 1a Junior, which makes 2½ x 4¼ negatives. You can clearly see the silver mirroring, which appears blue in the deep shadow areas.  I also tried to date the album using the cars in the picture, so I’m guessing early 1920s. The Kodak No. 2C Autographic Junior, below right, made pictures  2-7/8 x 4-7/8 inches on 130 roll film.  The No. 1 in the upper right is glossy Velox, and is my favorite among the Velox papers featured here; it has strong contrast with a super high gloss finish. 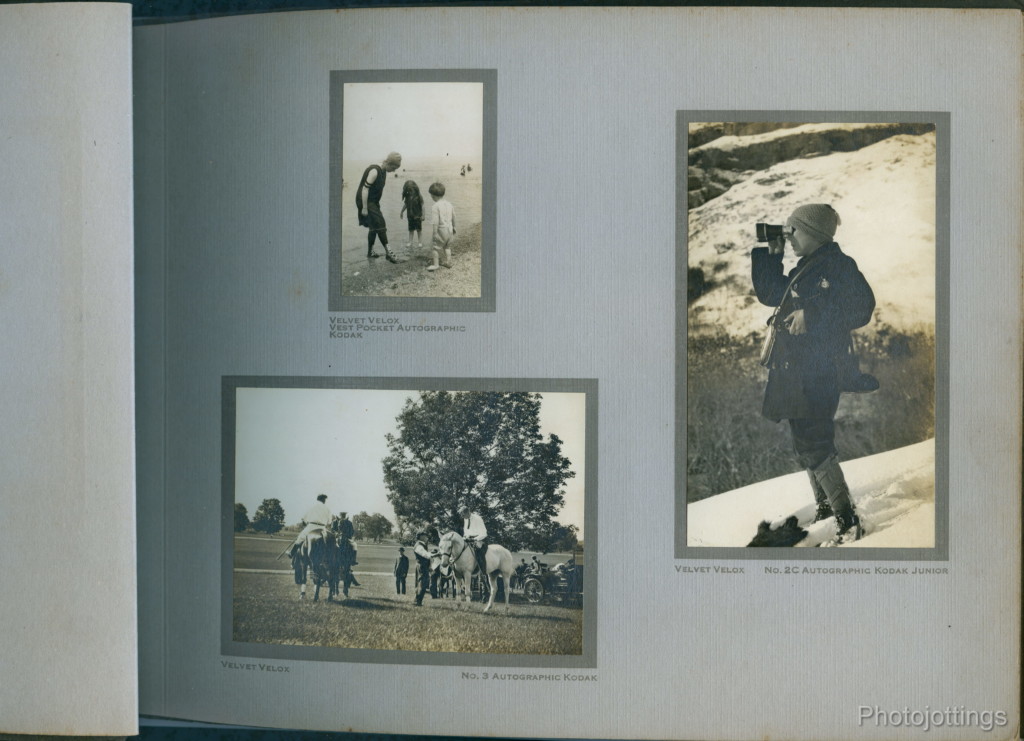 The picture at the bottom left was made with a No. 3 Autographic Kodak, with a negative size of 3¼ x 4¼ inches on 118 roll film, but also was popular and available in sheets for different cameras.  I see more cars in the background, and look like they might be from the teens. 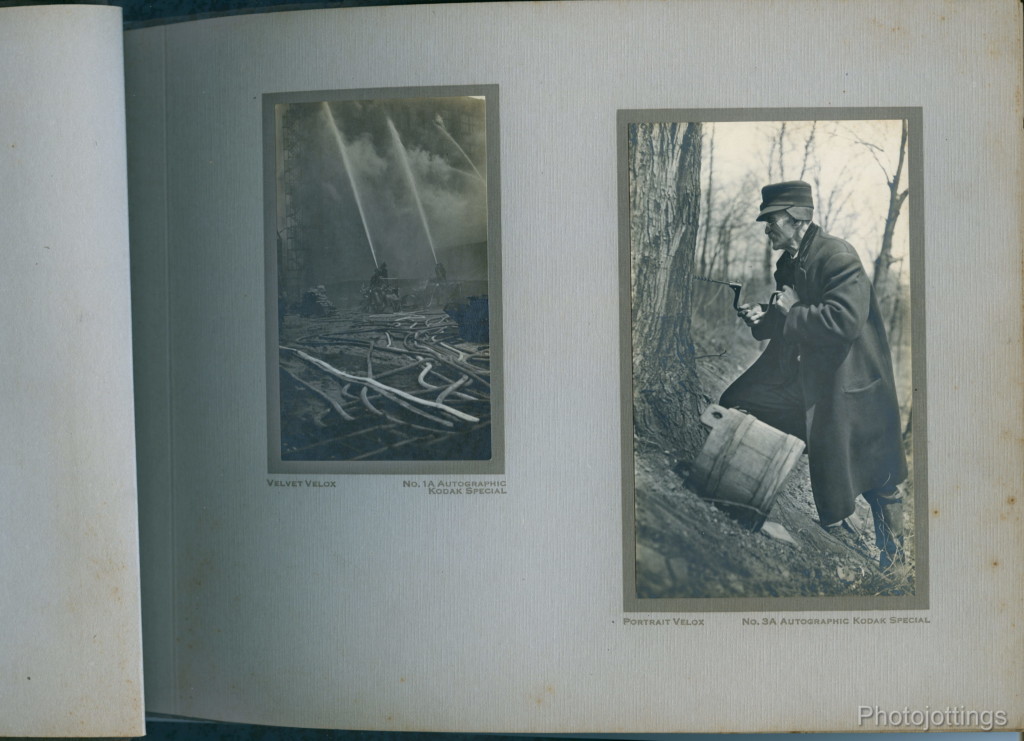 My favorite picture from the album is the tree driller on the right.  Here the paper is Portrait Velox, and has light contrast. 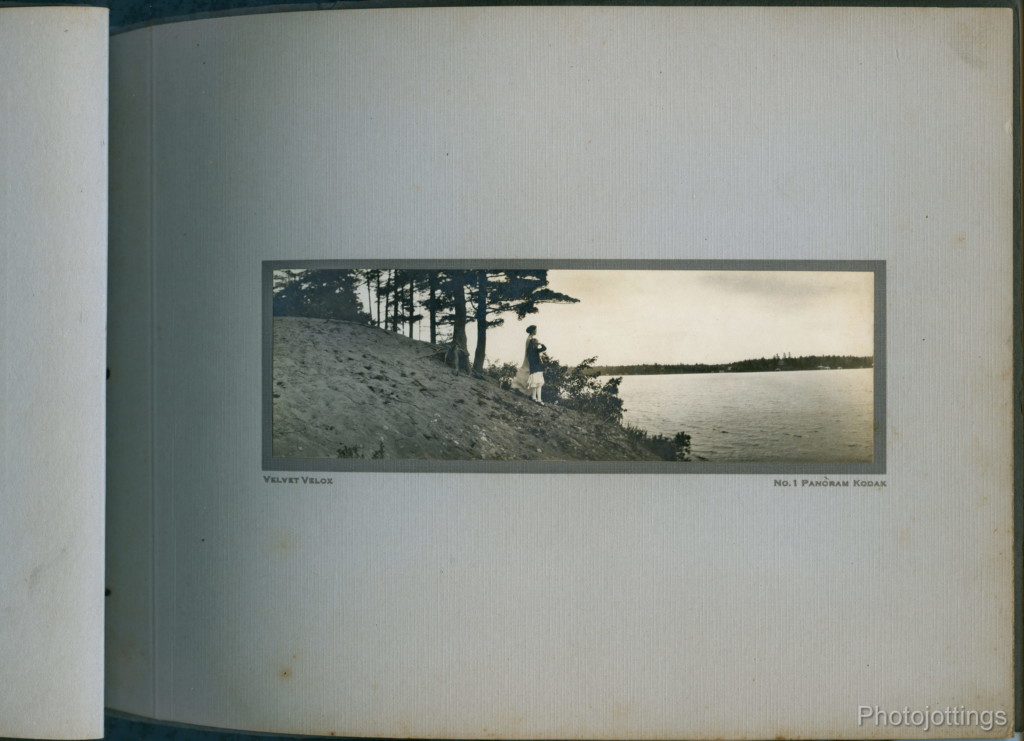 A No. 1 Panoram Kodak.  I don’t care for the composition or lighting of this picture; I’m not sure how it made it to the album. 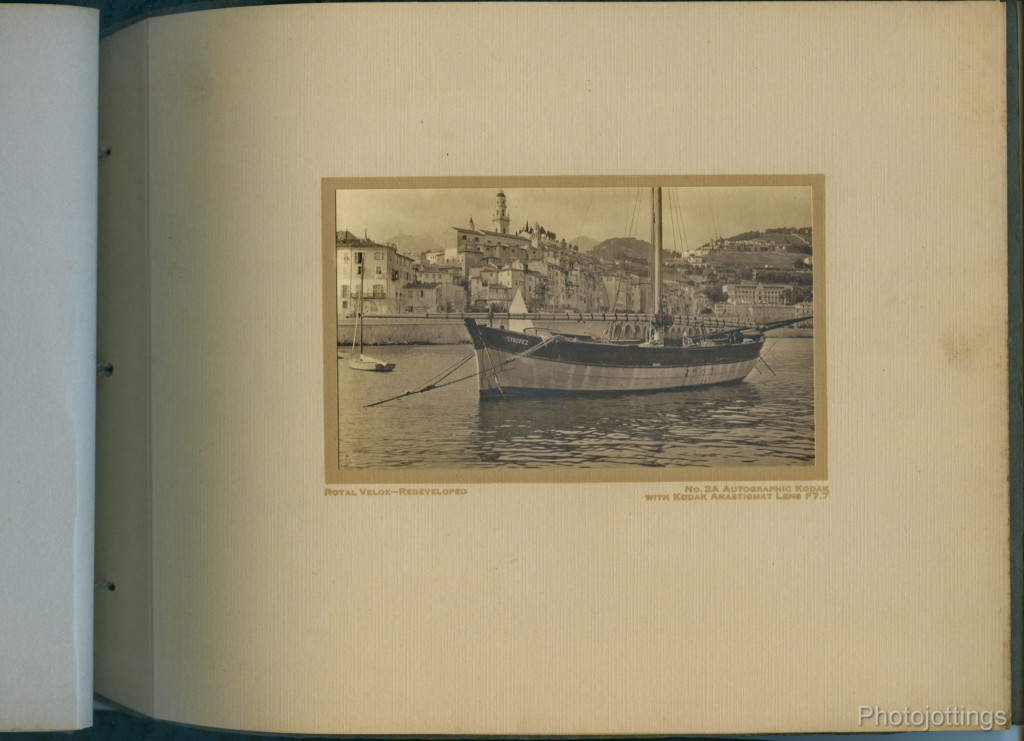 Now we’re back to tan colored pages, with a single centered print using Royal Velox.  Kodak is showing a redeveloped print, or negative, I’m not sure which one was ‘redeveloped.’ 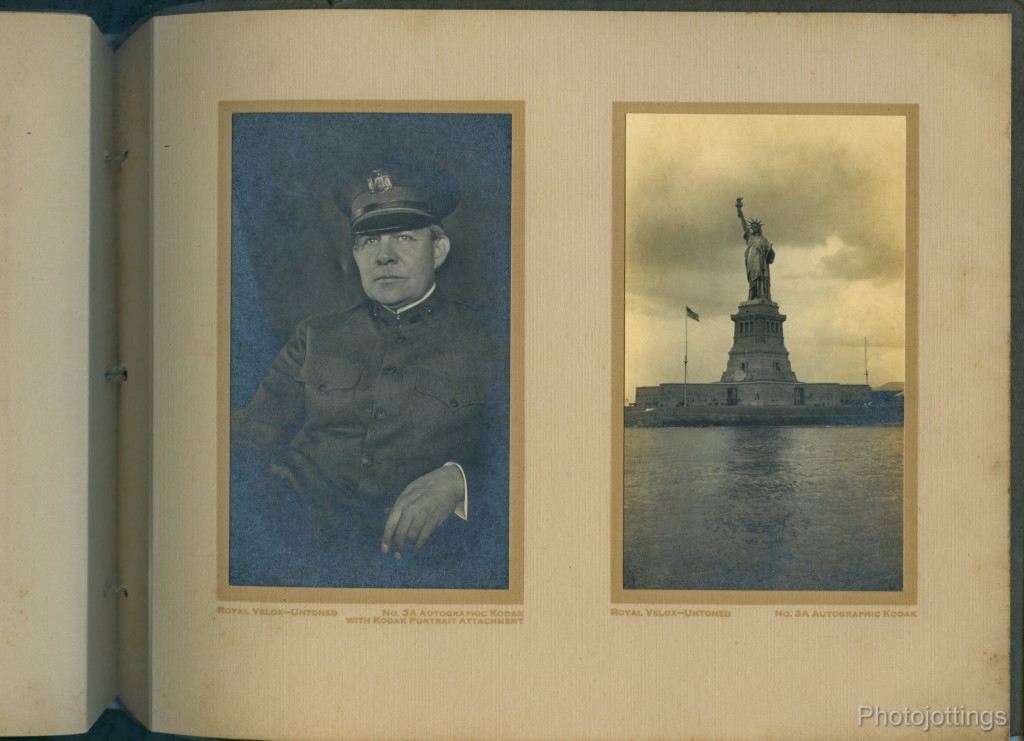 The left image shows an officer posing, with a ‘portrait attachment’ put on the front of the lens.  Both prints are labeled as ‘untoned.’

Well, that’s it for the trip down memory lane, and a peek into Kodak’s Velox brand photographic print options from the past.