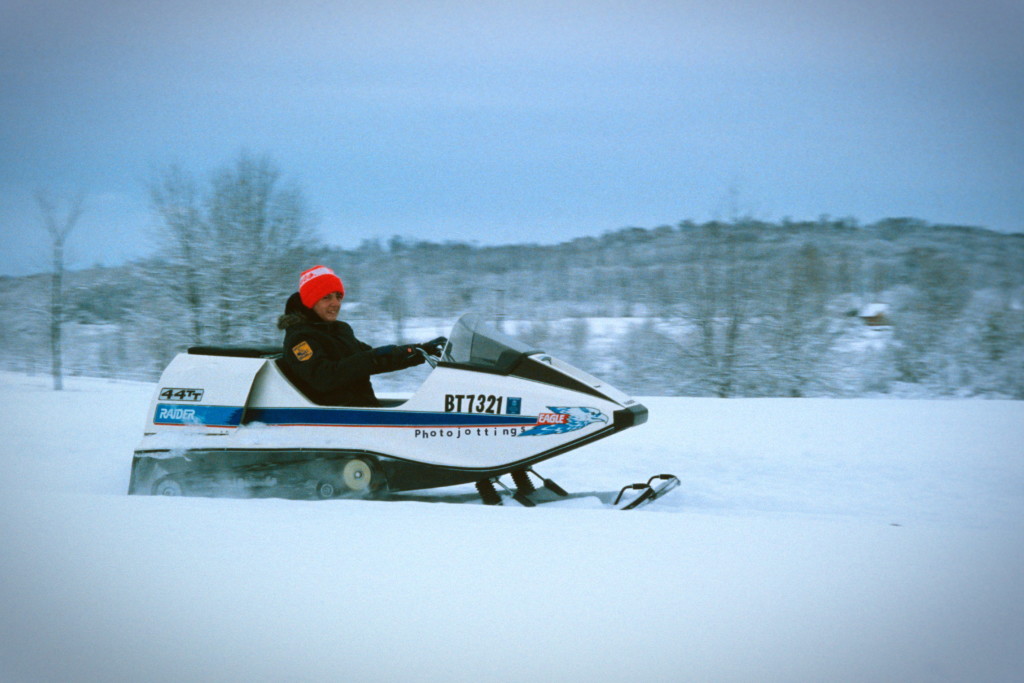 There’s fresh snow on the ground, so fire up your snowmobile, grab a film camera, and let’s hit the trails!  Not in Tucson though, darn it.

I thought I’d post another Kodak moment picture; this time it’s an Ektachrome slide from about 1979/80.

The subject is me, and a 1974 Raider Eagle Snowmobile.  The Raider was unique in that it had twin tracks, a rear mounted engine, and padded cockpit seating; more pictures of Raiders here.  Our Raider had a 440 CCW engine, electric start with a tachometer and speedometer. When the engine was tuned up properly, and on hard packed snow, It would do about 70 MPH (113kph).  Some people worried about what would happen if you rolled it over being seating inside the vehicle and not really able to jump out quickly; I did that one time, and it wasn’t actually a bad experience.  A strong neck and the knit cap was good enough as I slid along, upside down and into a snow bank.

The Raider was a fun ride, but it had a lot of problems, mainly due to it being a low production, short run vehicle, and as a result, they never really had the time or resources to get the bugs worked out.  My Grandfather bought this brand new Raider at an auction for almost nothing; they were going out of business; and shortly after that, my Dad talked my grandfather out of it, and we ended up owning it for about 5 years.  I remember my last Raider ride, I think it was early winter in 1981 after a big snow, the first ride of the new season.  I decided to ‘drag race’ my buddy in his 1970 Pontiac LeMans Sport on the street in front of our house, and as I hit about 6000 RPM on the tach, the chain came apart and flew through the fiberglas body right beside me. We ended up dragging it home behind his car, and putting it in the garage. Unfortunately, that was the last ride for me; Dad ended up fixing it and sold it shortly after.

Interesting side notes; notice the black padded ‘seat’ on the rear engine cover, you could carry a passenger here, where they would hang on for dear life using the little plastic hand strap just in front of the seat.  Check out my orange Michigan ‘safe snowmobiler’ patch on my right shoulder, and the ‘Coors’ beer knit cap which was a typical ‘helmet’ back then.  There’s nothing like beer and snowmobiling when you’re 15 years old!  Also notice the hardware store ‘photojottings’ stickers on the side, I was thinking about running a photo magazine, but got sidetracked for three decades; or maybe not.

Photo was taken with Kodak Ektachrome film with my Dad’s Aries 35 IIIL 45/1.9 camera.